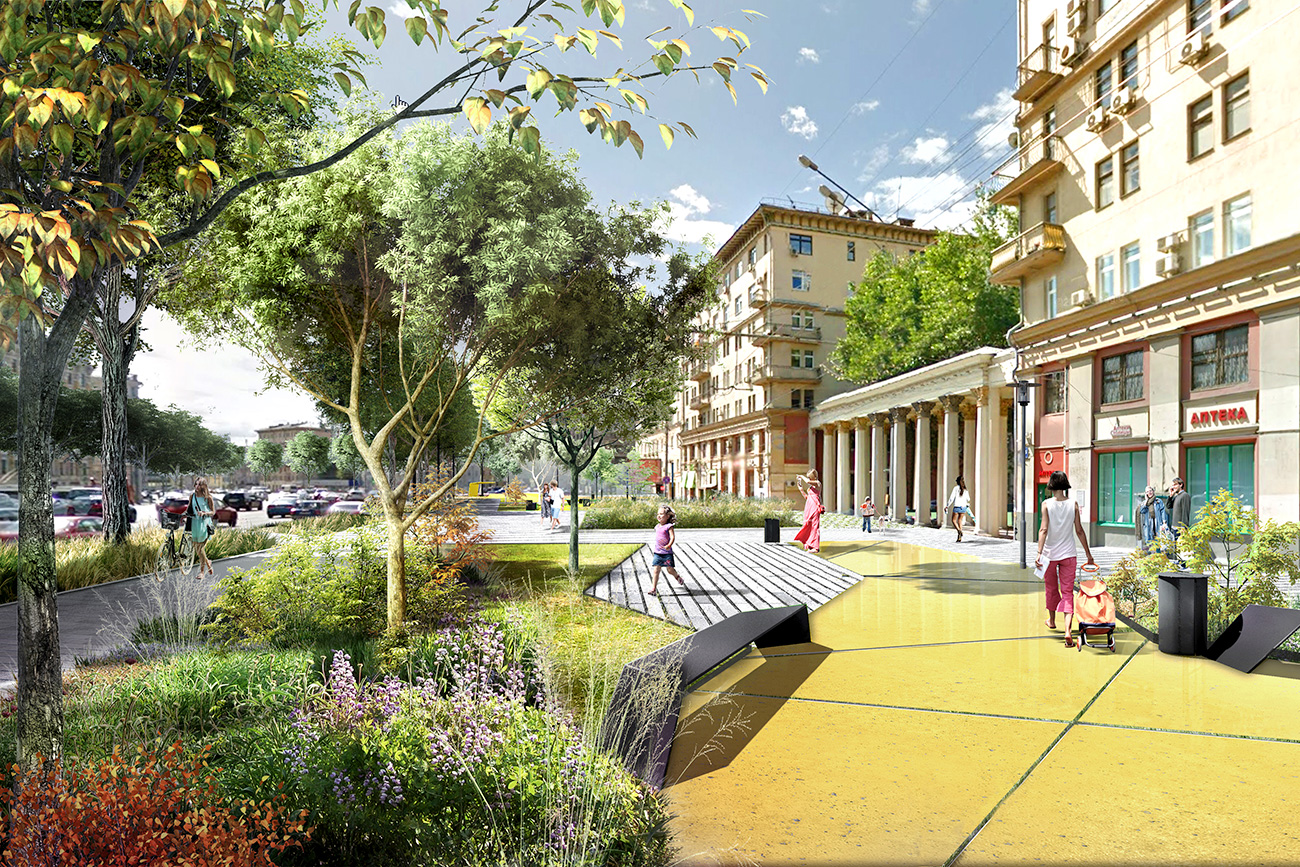 Moscow’s Garden Ring is about to get a whole lot greener.

Strelka KB
The Russian capital will soon have more trees, parks, bike rental points, relaxation zones, and wider sidewalks, which is only good news for pedestrians.

Work to beautify one of Moscow's main traffic arteries - the Garden Ring - has begun. After the project is complete, the road will be narrowed to 10 lanes (from 16) and trees will be planted on the widened sidewalks.

Over a century ago, the Garden Ring truly lived up to its name. It was a broad, green boulevard - so efforts are being made to return it to its former glory. "The idea of tree planting and returning gardens to the Garden Ring is one of the key points of the reconstruction," said the Strelka Design Bureau, which is responsible for the transformation.

Sixteen renowned Russian and international architectural studios are involved in the project, including Germany’s Latz + Partner, France’s Villes & Paysages, Norway’s Snøhetta, and others. Construction work will continue until the fall of 2017 - it’s part of the “My Street Program” launched by the Moscow government in 2014. In total, 75 percent of the Garden Ring is set to be developed this year, from Dolgorukova Street to Zubovskaya Square.

Linear gardens, planted in two rows, will form a buffer zone and a fence to block off the carriageway. The project also includes a significant expansion of the pedestrian area, a relief road with linear parking spaces, and a relaxation zone for pedestrians.

A palisade will be built in front of the Bakhruchinsky Museum and other features will be upgraded, with wider sidewalks, multi-colored paving, terraces, more trees, and safe pedestrian crossings all planned.

The park in front of the Museon

The square in front of the entrance to Museon Park is a vital route for both pedestrians and traffic. The new project intends to expand the sidewalks by up to 13 meters, plant around 50 trees, and create small grassy hills. The car park will also be surrounded by vegetation.

This territory is a hidden area with a staircase built in the Italian style, which is half-covered by an arcade fencing it off from the Garden Ring. The original car park here will be replaced with a platform with colored asphalt, bushes, and flowers. The space is dedicated to schoolchildren since the Chkanov School is nearby.

Today this is one of the widest areas of the Garden Ring. The project foresees a linear boulevard that will be created by Villes & Paysages, the French design bureau.

The cark park in front of the Krasnye Vorota Metro building will be moved and in its place architect Michelle Divin will create an exquisite public space with hills that will frame architectural monuments.

Sadovaya Samotechnaya is already popular with walkers, but Germans Latz + Partner plan to make it even better for pedestrians and café visitors. Soon they will be able to gaze up at trees and instead of the cark park under the overpass there will be a lawn with flowerbeds.

A small plaza will be built here. Dutch architects from the Juurlink En Geluk design studio have proposed creating street furniture so people can sit back and relax. They have also suggested a bike rental point together with the Moscow Municipal Department of Transportation and Development of Road-Transportation Infrastructure.