From carriages to palaces: What gifts did Catherine the Great present? 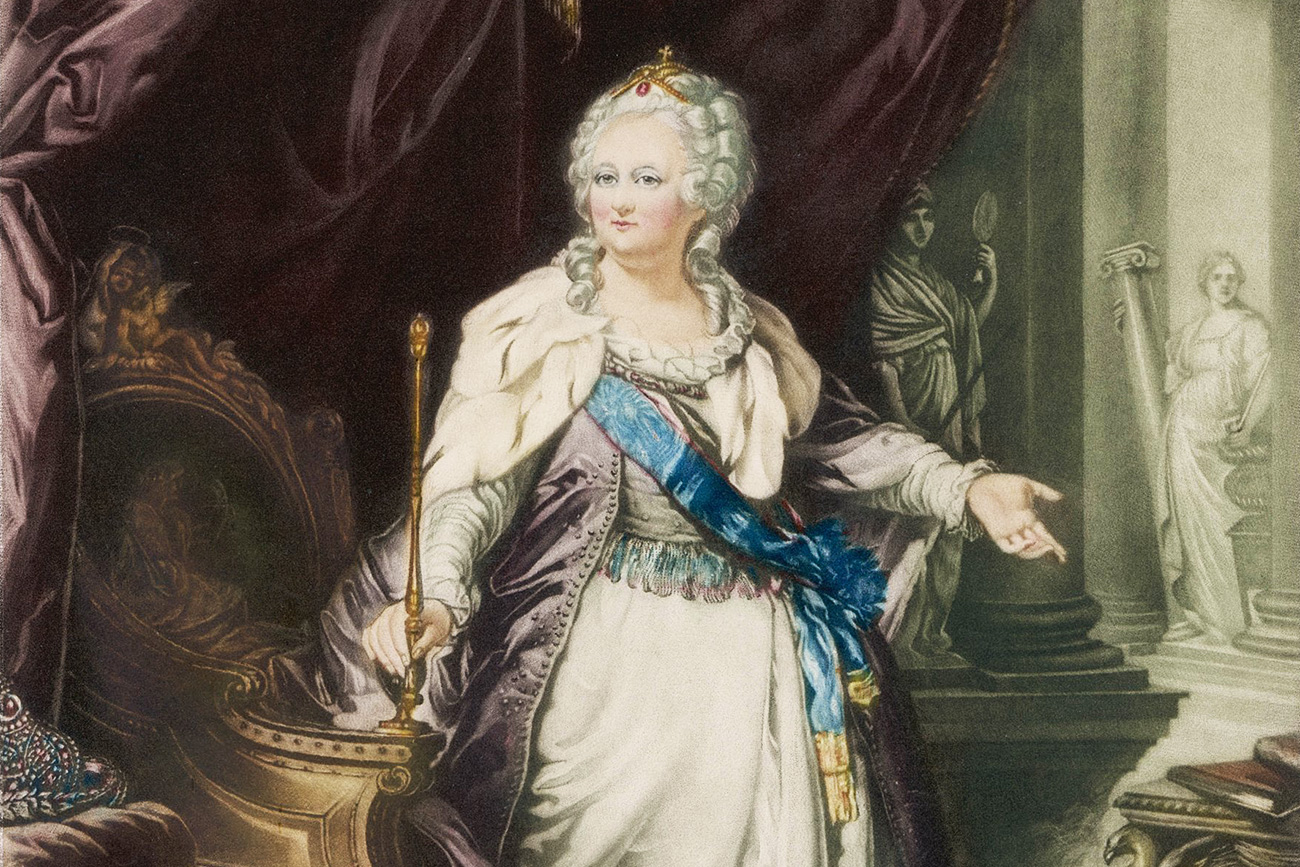 Mary Evans Picture Library/Global Look Press
A left-hand glove, a bed made of steel, a village and its serfs, and a homemade chess set are just some of the objects that the Empress Catherine gave as presents to people close to her, as well as to complete strangers who struck her fancy. The Arzamas Academy looks back at 10 amazing presents given by Catherine the Great, some of which can still be seen today in museums.

In this carriage in 1767 the Empress entered Kazan. According to legend, she gave it to Archbishop of Kazan Veniamin, but the carriage did not appear in the inventory of the archbishop's house.

Nevertheless, it's definitely known that in 1889 the Archbishop of Kazan Pavel gave the coach to the City Duma, which in turn donated it to the Kazan City Museum. The carriage is six meters long and 2.8 meters high, and the diameter of the rear wheels is 1.8 meters. Images of Zeus, Neptune and Venus, as well as Neptune's chariot and ship are depicted on the sides. 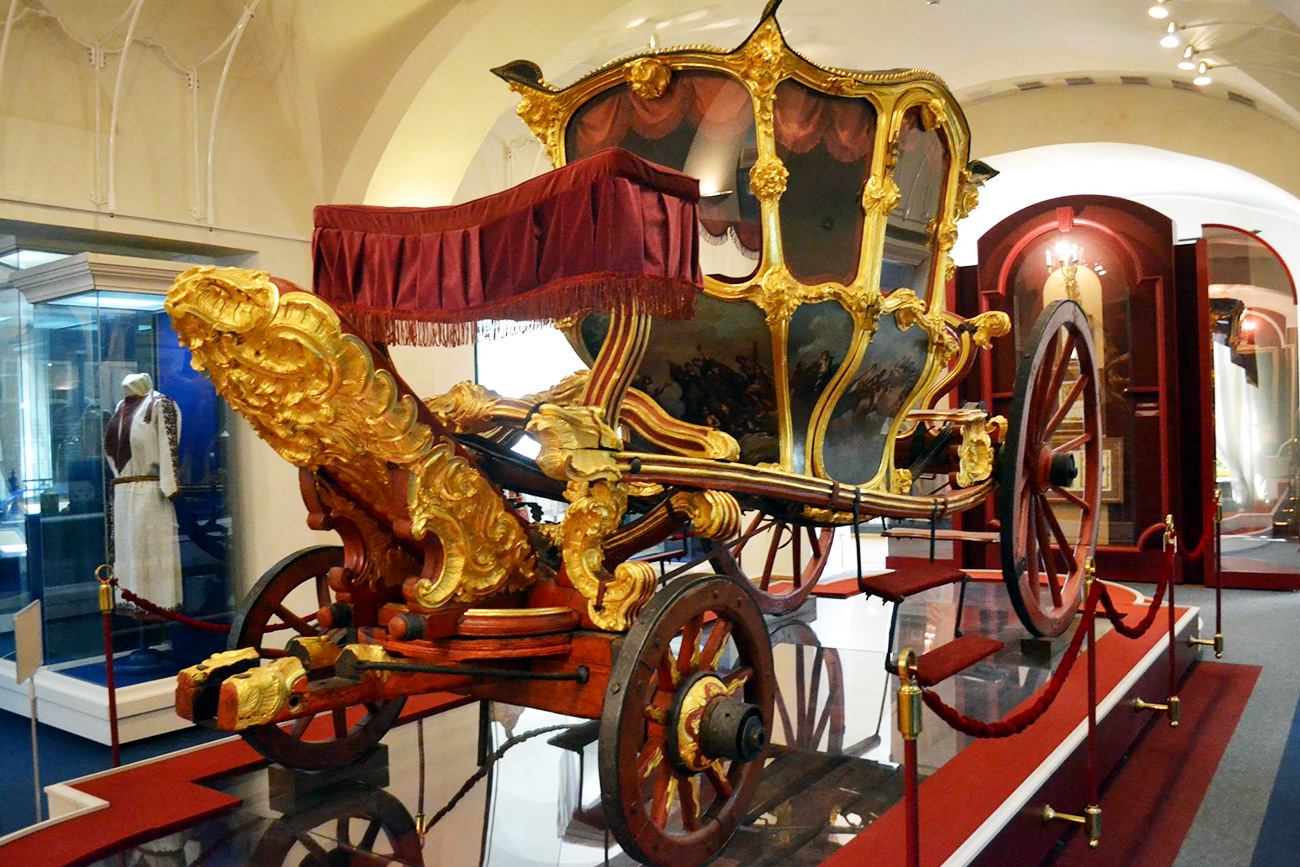 Carriage of Catherine the Great / National museum of Republic of Tatarsatan

A pair of gloves

On April 20, 1767, Catherine visited the foundling hospital "in Kitai-Gorod near the Varvarskiye Gate," and gave her gloves to two orphans - the left-hand one to Ivan Gerasimov and the right-hand one to Mikita Andreyev, according to an inscription in Russian and German on envelopes holding the gloves. Almost 156 years later the gloves, each of which had gone their seperate ways, were reunited in the collection of the State Historical Museum.

A pair of spectacles

The Empress gave her own eyeglasses as a present to Vice Governor of St. Petersburg Novoseltsev, who ordered a case to be made with the following inscription on the lid: "The spectacles stored here, which used to belong to the Great Empress, were granted to St. Petersburg Vice Governor Novoseltsev on Nov. 4, 1786 during a discussion with Her Majesty on the subject of his headache." Catherine advised Novoseltsev to wear glasses to get rid of the headache, and gave her own pair. 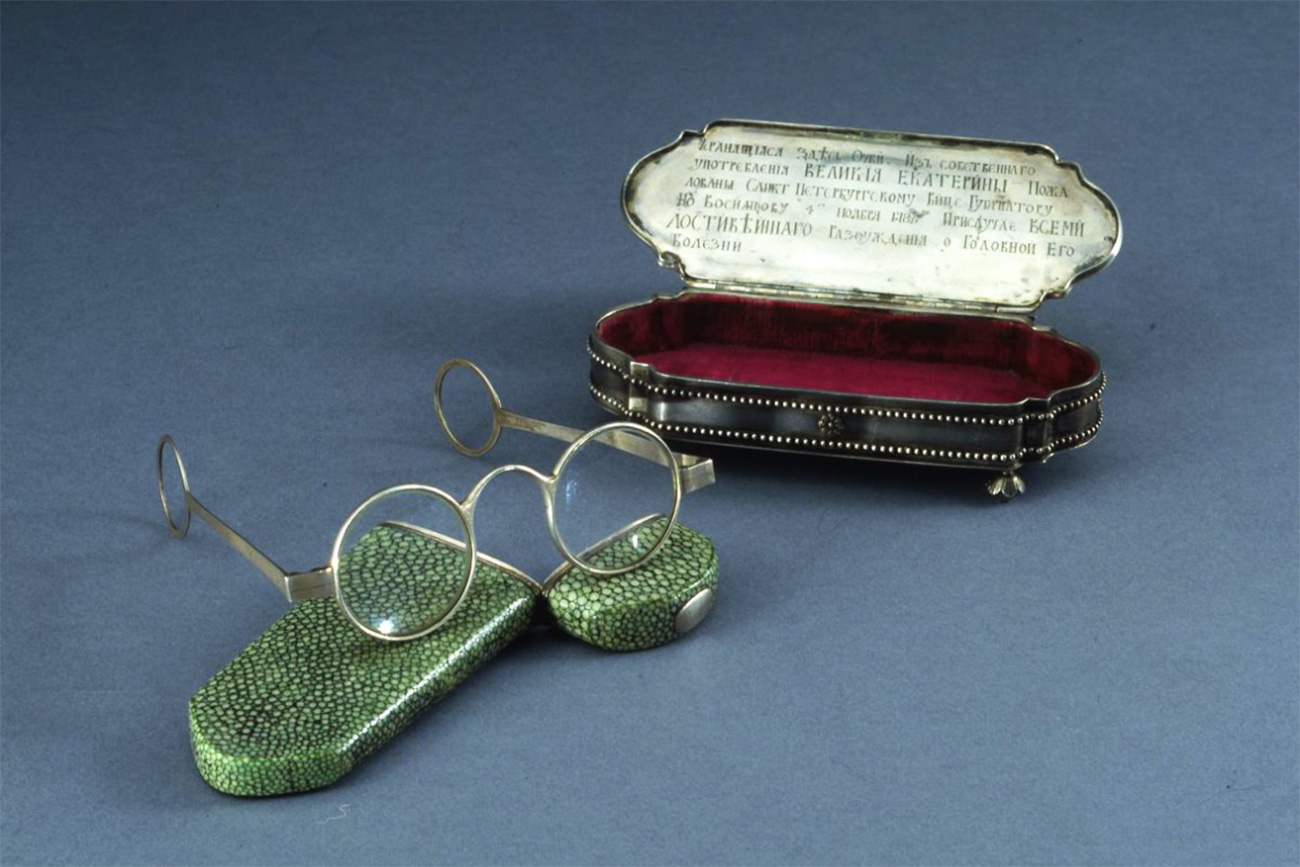 Among the toys presented by Catherine the Great to her grandson, Grand Duke Alexander, was this silver drum with a monogram of the Grand Duke on the side. Alexander grew up but the drum remained in the children's rooms of the Winter Palace, and subsequent successors to the throne played with it. 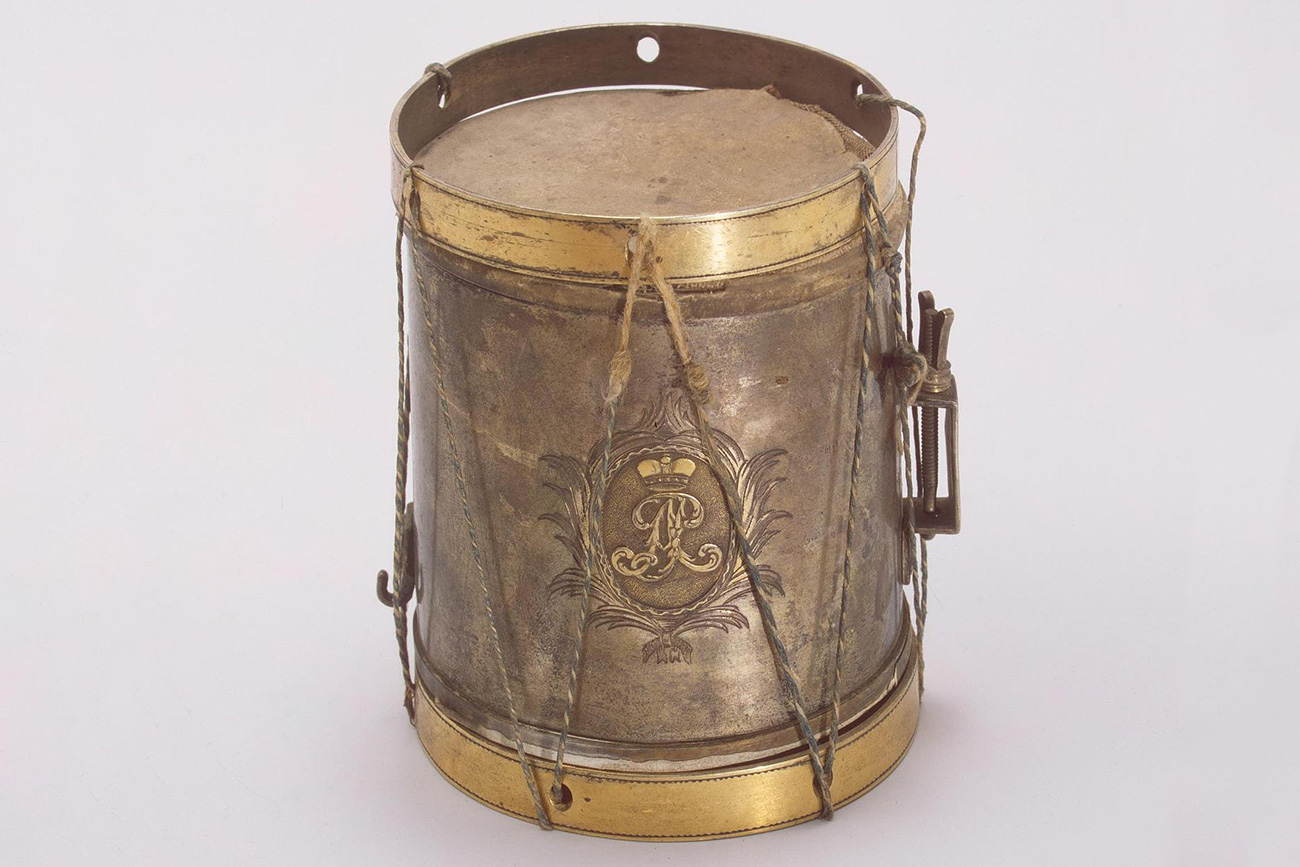 It’s believed that this saber was also among the gifts made by Catherine to her beloved grandson Alexander, the future emperor. It possibly dates to the late 1770s, and the blade has the following inscriptions in gold: "The era of Sultan Suleiman, in the year 957 (1540/1541)," "There is no God except Allah," "The Almighty," and "May Allah keep you safe."

On the blade’s spine the word "prosperity" is repeated three times, and in a groove there is the inscription in Greek: "Lord, judge those who offend me and overcome those who fight against me. Take your weapons and shield and rise up to help me, Irakly [Heracles]." On the front of the handle is an image of the Emperor Augustus, and on the reverse is an image of Alexander the Great.

A chess set made of ivory with fine carving was made by the Empress herself, according to an inscription on the case, which says: "Carved by Her Imperial Majesty Catherine II. Received on Feb. 25, 1766." Dmitry Ivanov, who worked as head of the Armoury from 1922 to the 1930s, suggested that the Empress presented the chess set to her personal secretary Ivan Betsky.

The Empress ordered this service in 1777 as a gift to her favorite, Prince Grigory Potemkin. It consisted of more than 700 items created with forms that were never used for other services. This one was decorated with Catherine’s floral monogram and depictions of cameos from antique originals in the collection of Louis XV. 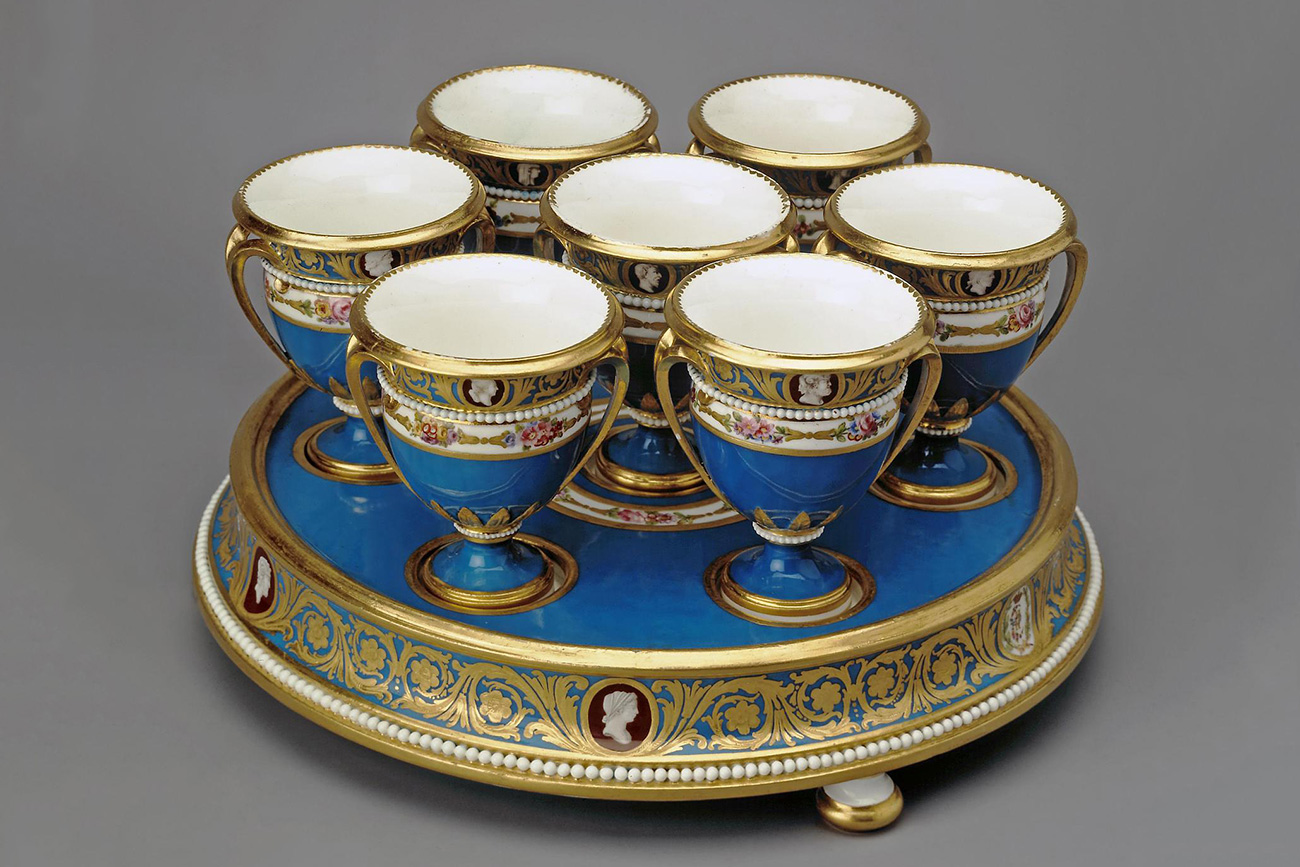 The bed was a wedding present to the niece of Prince Potemkin, Alexandra Vasilievna Engelhardt, who in 1781 married Polish Great Crown Hetman Franciszek Ksawery Branicki. The bed was made by special order of the Empress at the Tula Arms Factory. The lower part of the columns is decorated with diamond facet сuts. Today, the bed is in the Lviv Museum of Ethnography, Arts and Crafts.

In 1779, Catherine granted her official secretary, Pyotr Zavadovsky, the villages of Popovka, Veselovka, Zavidovka and others in Mogilev Province, and which had a combined population of 3,950 male souls, "for his service... during the war... under General Field Marshal Rumyantsev-Zadunaisky."

Construction of the Anichkov Palace began in 1741 by decree of Empress Elizabeth for her favorite Alexei Razumovsky. In 1776, Catherine II bought the baroque palace (the last architect who worked on it was Rastrelli) from Kirill Razumovsky, Alexei's brother, and gave it to her favorite, Prince Grigory Potemkin.

Prince Potemkin first ordered the architect, Ivan Starov, to rebuild the old palace but then sold it to a merchant by the name of Shemyakin. However, the Prince could not be rid of the royal gift because Catherine bought the palace again, and again gave it to Potemkin. 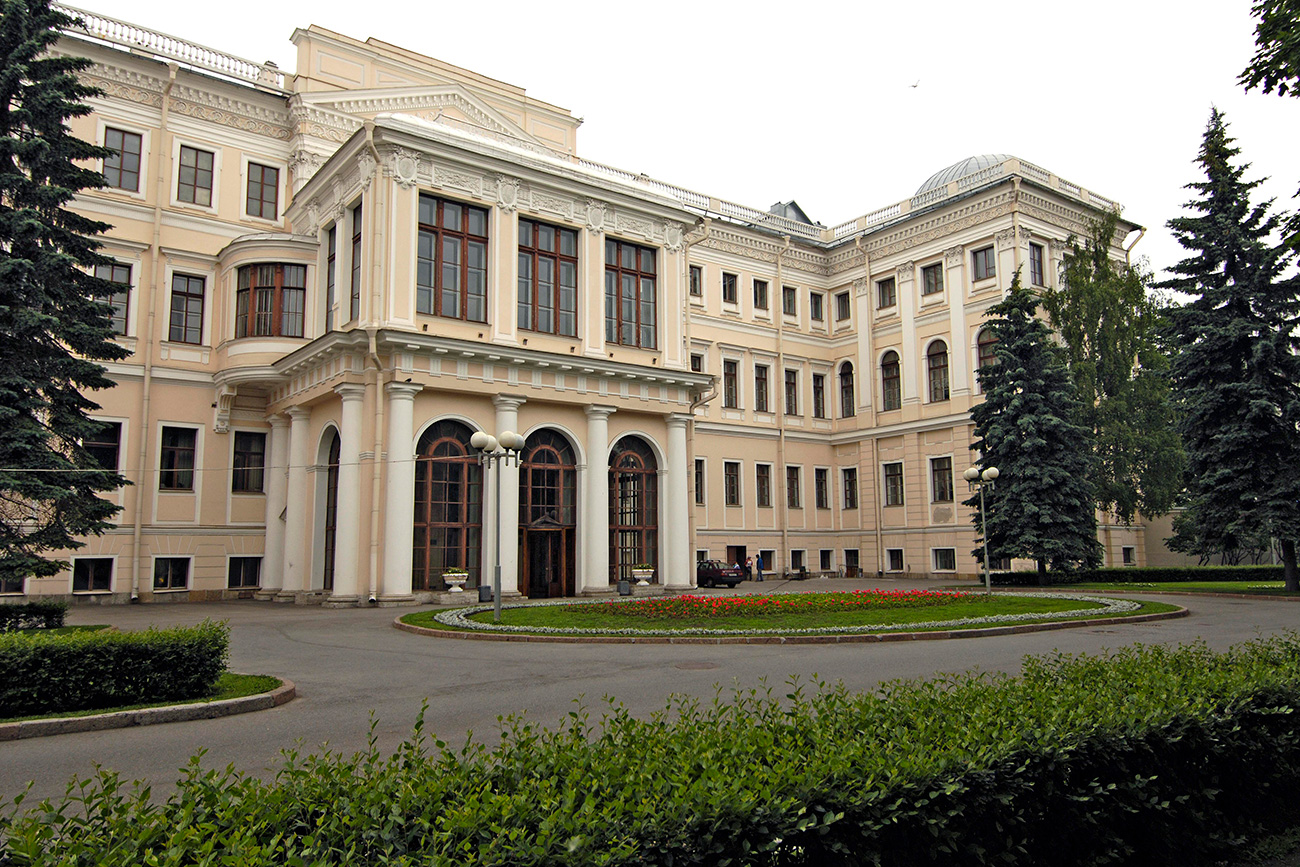 This is an abridged version of an article first published in Russian by Arzamas. Prepared by Elizaveta Kanatova

Read more: What was so ‘Great’ about Catherine?