Curtains up, shoot! How theater survived the 1917 Revolution amid gunfire 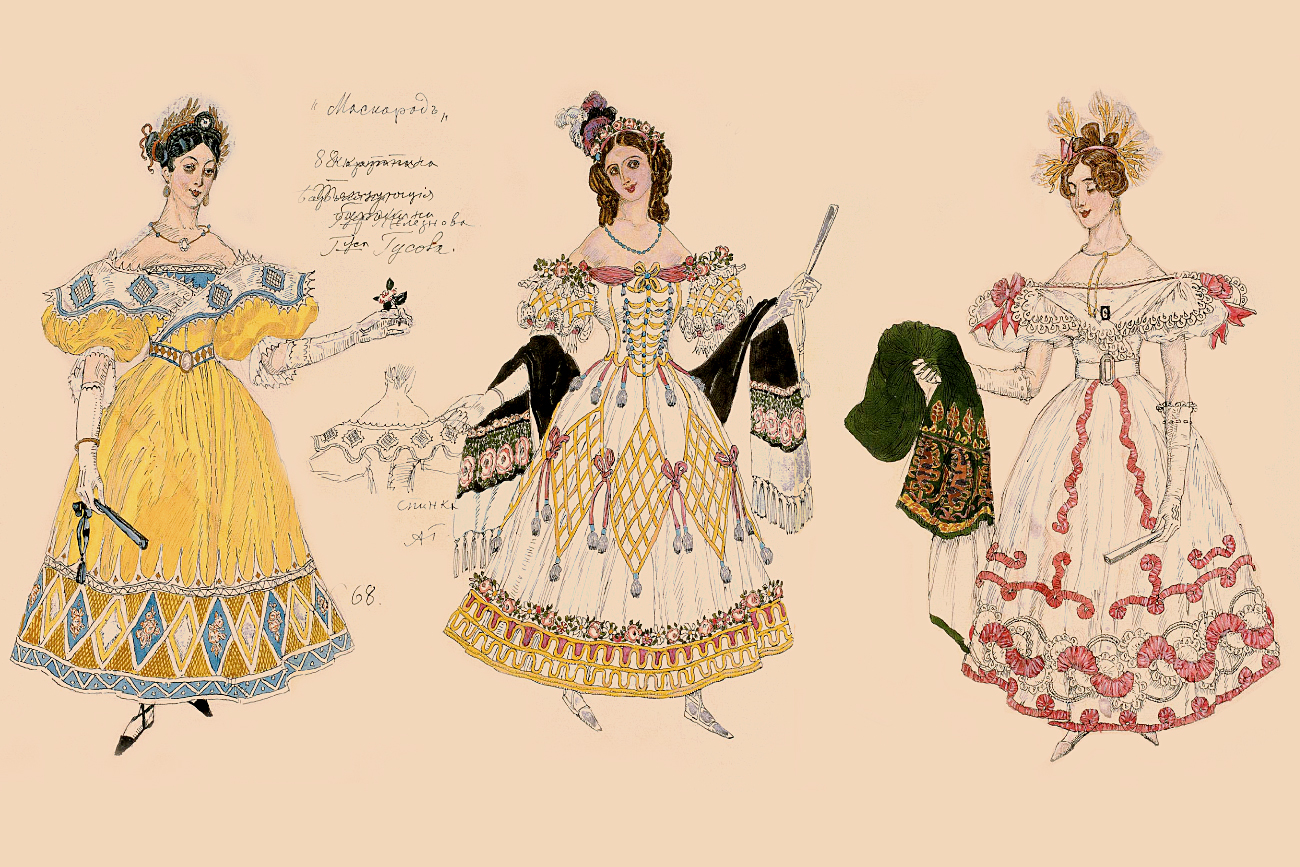 Alexandrinsky Theatre
Despite the gun battles and rebellious chaos, the cultural scene continued to thrive in St. Petersburg – or as it was known at the time, Petrograd. Renowned theater director Vsevolod Meyerhold symbolically premiered his "Masquerade", based on Mikhail Lermontov's play, in Alexandrinsky Theatre. Contemporaries later shared their accounts of the chaos that ensued. 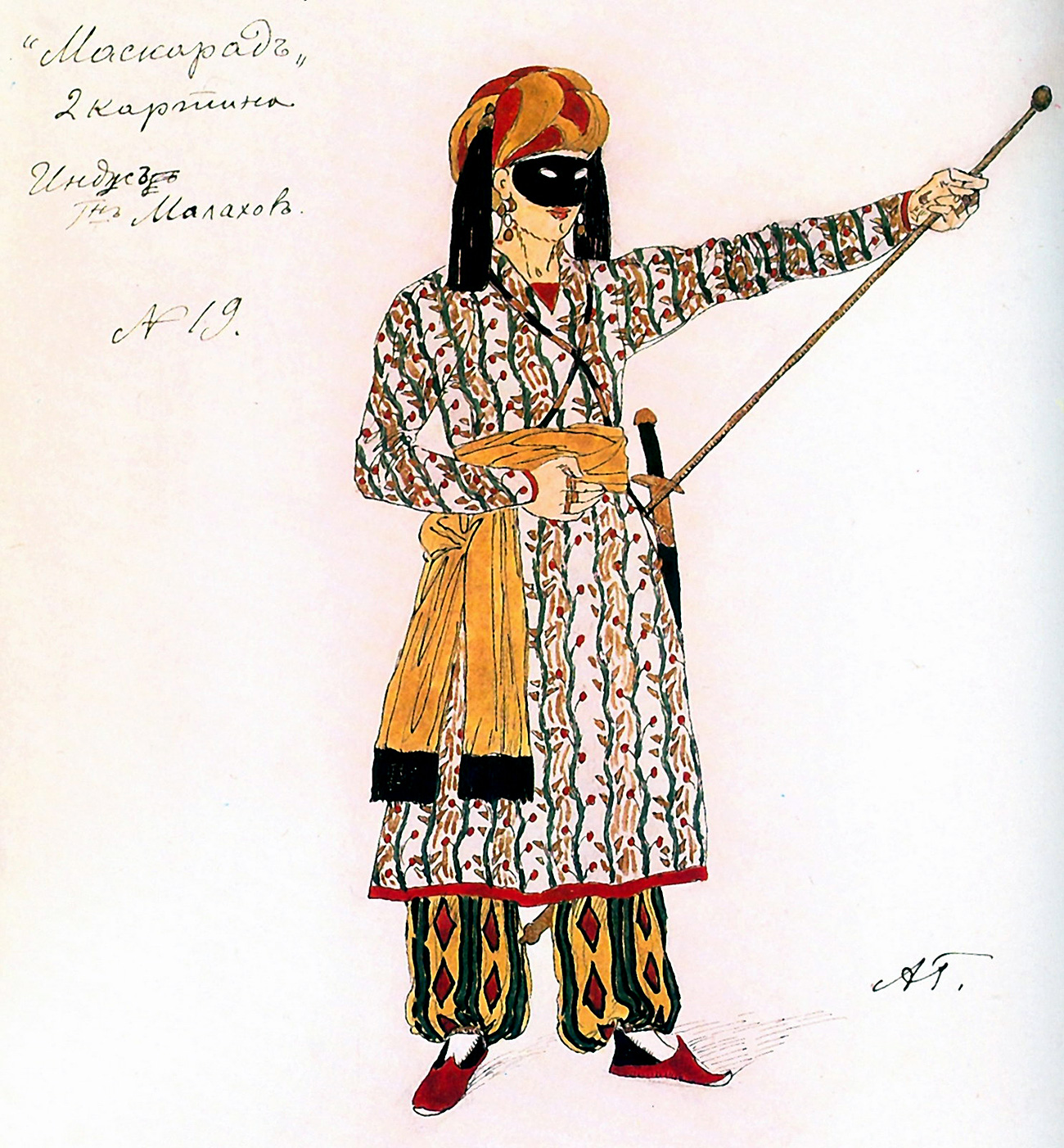 Mikhail Lermontov’s four-act tragedy Masquerade written in 1835, premiered in 1917 in St. Petersburg when the streets were hosting another “tragic masquerade of Russian life.” The Revolution had just kicked off and gunfire filled the air as the country teetered on the edge of a new reality. 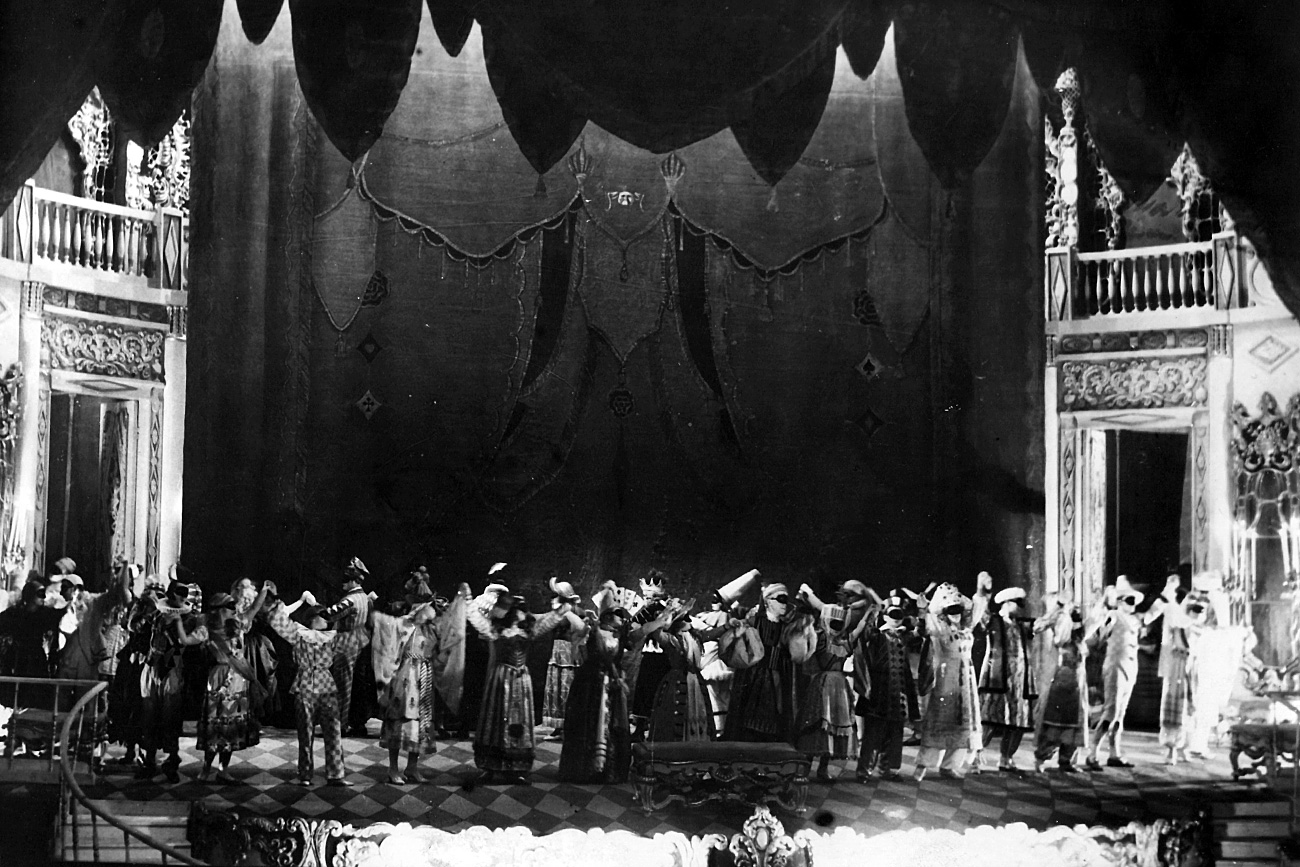 A scene from "Masquerade" / Alexandrinsky Theatre

“I was walking to the theater to watch Masquerade from the outskirts of St. Petersburg,” web portal 1917 cites from the memoirs of literary critic Razumnik Ivanov-Razumnik. “Not far from Trinity Bridge, a toppled streetcar was lying in the middle of the street, its windows smashed and its wheels bent. Earlier in the day, that same street had been filled with people marching and demanding 'bread' – was it only bread they wanted? Later, in the evening, single shots sounded. The streets lay desolate. Hunger had not yet had a chance to intervene with the masquerade.” 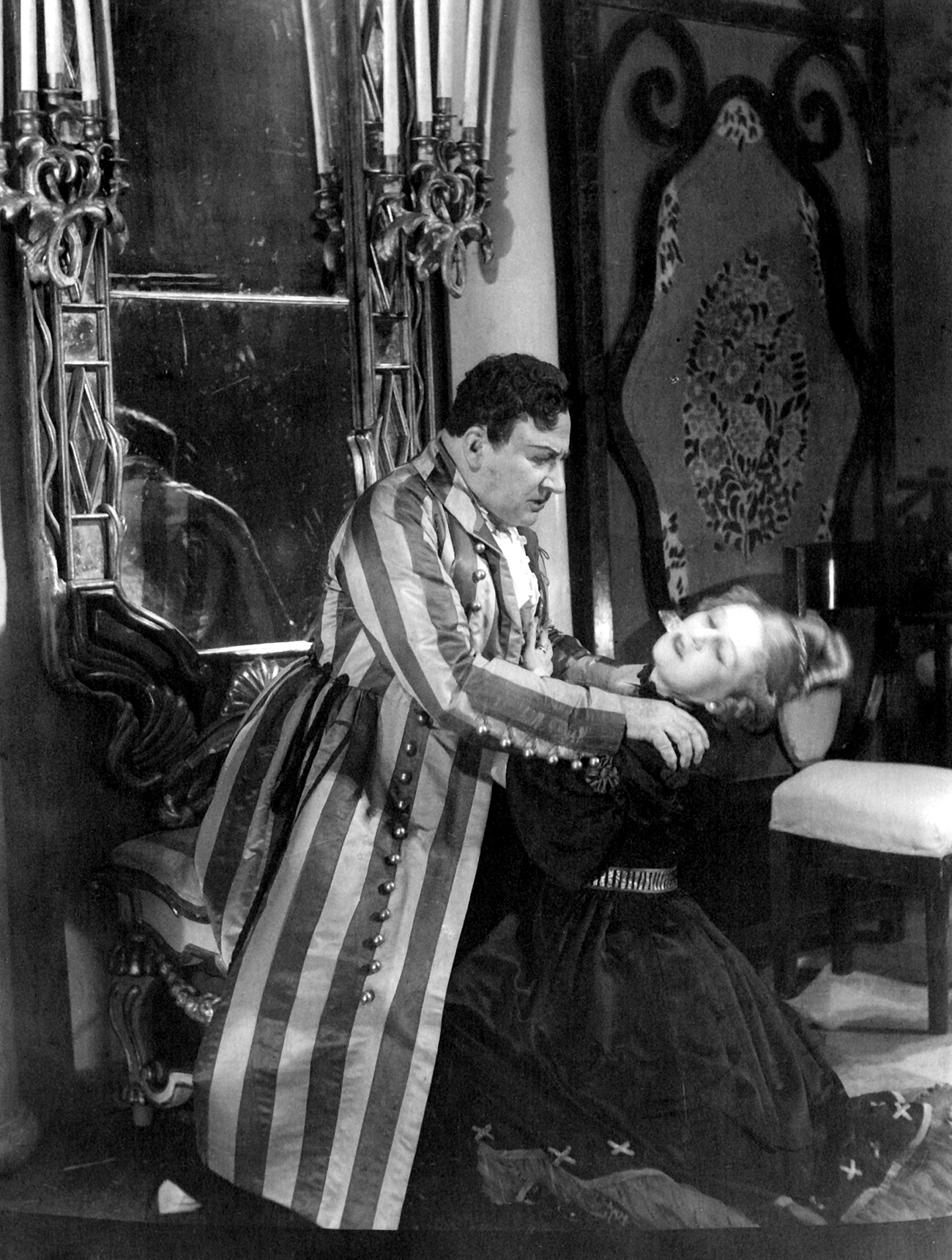 The play tells the following story: Baroness Shtral, wearing a mask, approaches Count Zvezdich at a masquerade, confesses her love to him and gives him, as a memento, a bracelet lost by Nina, another female character. Nina's husband Evgeniy Arbenin recognizes the bracelet and confronts his wife, accusing her of infidelity. Not satisfied with Nina's explanation, Arbenin poisons and kills her. Once the truth comes out, Arbenin goes insane. 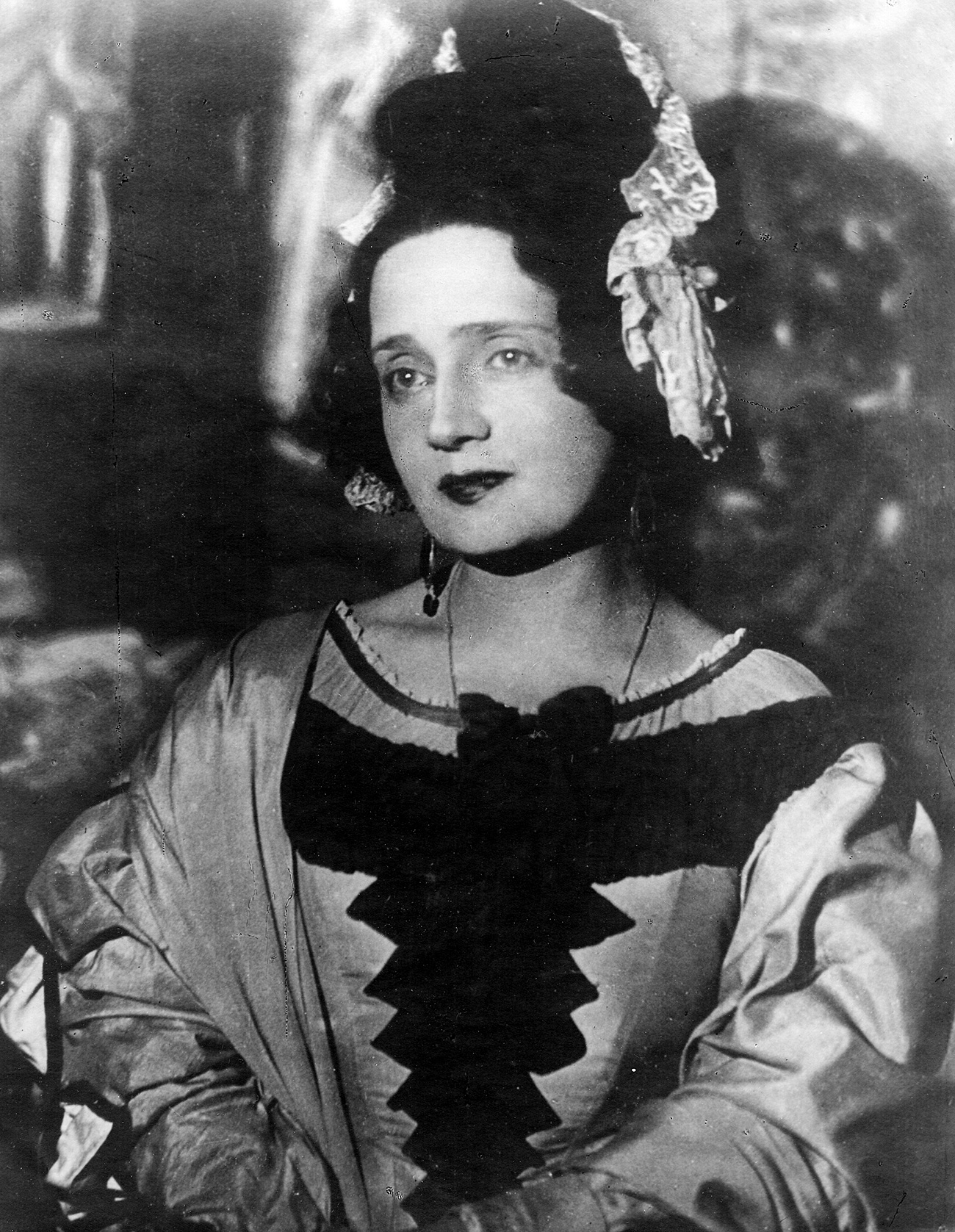 “On the day of the premiere it was already unsafe to be on the streets,” actress Yelizaveta Time, who played Baroness Shtral, later wrote in her memoirs. “Our agitation further grew after some student had been killed by a stray bullet in the theater lobby earlier in the day. Nevertheless, the premiere was a success: The public kept encoring the artists.” 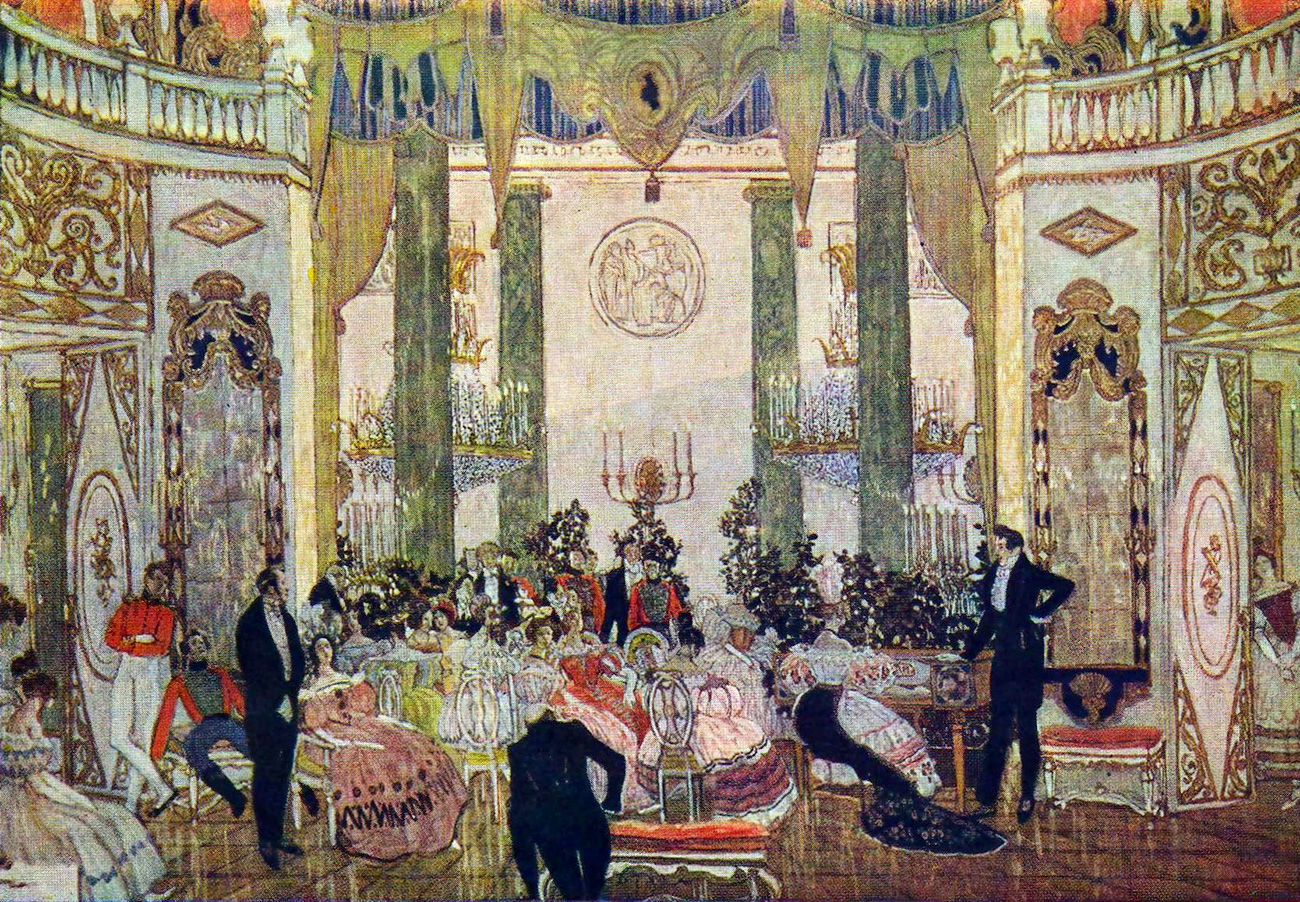 A sketch for a ball scene / Alexandrinsky Theatre

The Theater and Arts magazine had this to say about the premiere: “Masquerade was on in Alexandrinsky Theatre. Mr. Meyerhold had spent many years building his performance, like a pharaoh building his pyramid. Shots were still heard on remote streets, no streetcars operated, and streetlamps were burning low… The few remaining cabbies were heavily overcharging their patrons. Slogans sounded and crowds were gathering under flags. It was a barren and eerie landscape. The theater, by contrast, was full, despite the indecently high ticket prices!” 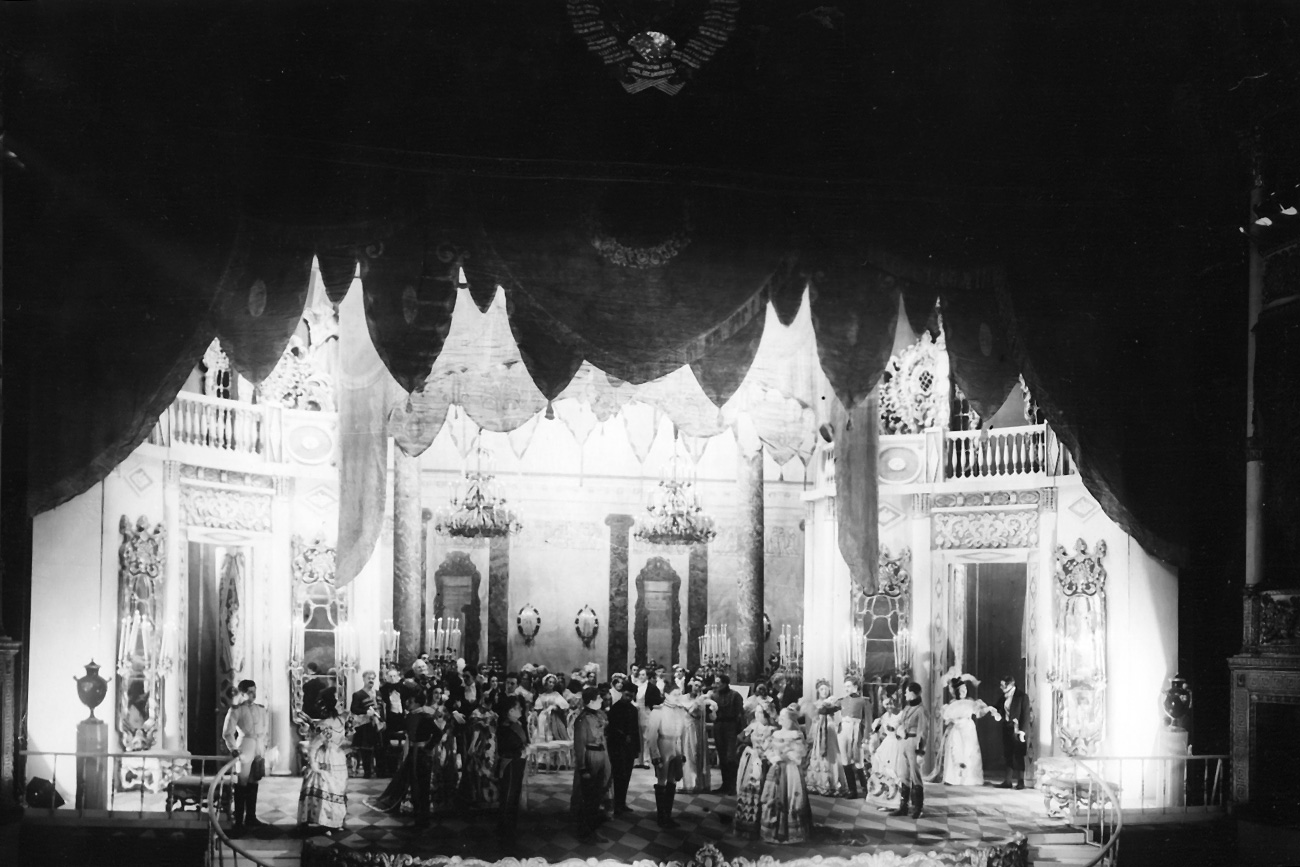 Alexander Golovin, a scene designer for Masquerade, recalled this scene: “The dress rehearsal was held in late February 1917, when shots were fired on the streets. The events nearly thwarted the rehearsal: A telephone call suddenly came requesting that the young members of the troupe report to the army barracks. It took the theater great efforts to retain them. By the day of the premiere, however, the situation had calmed down and it was a great success.” 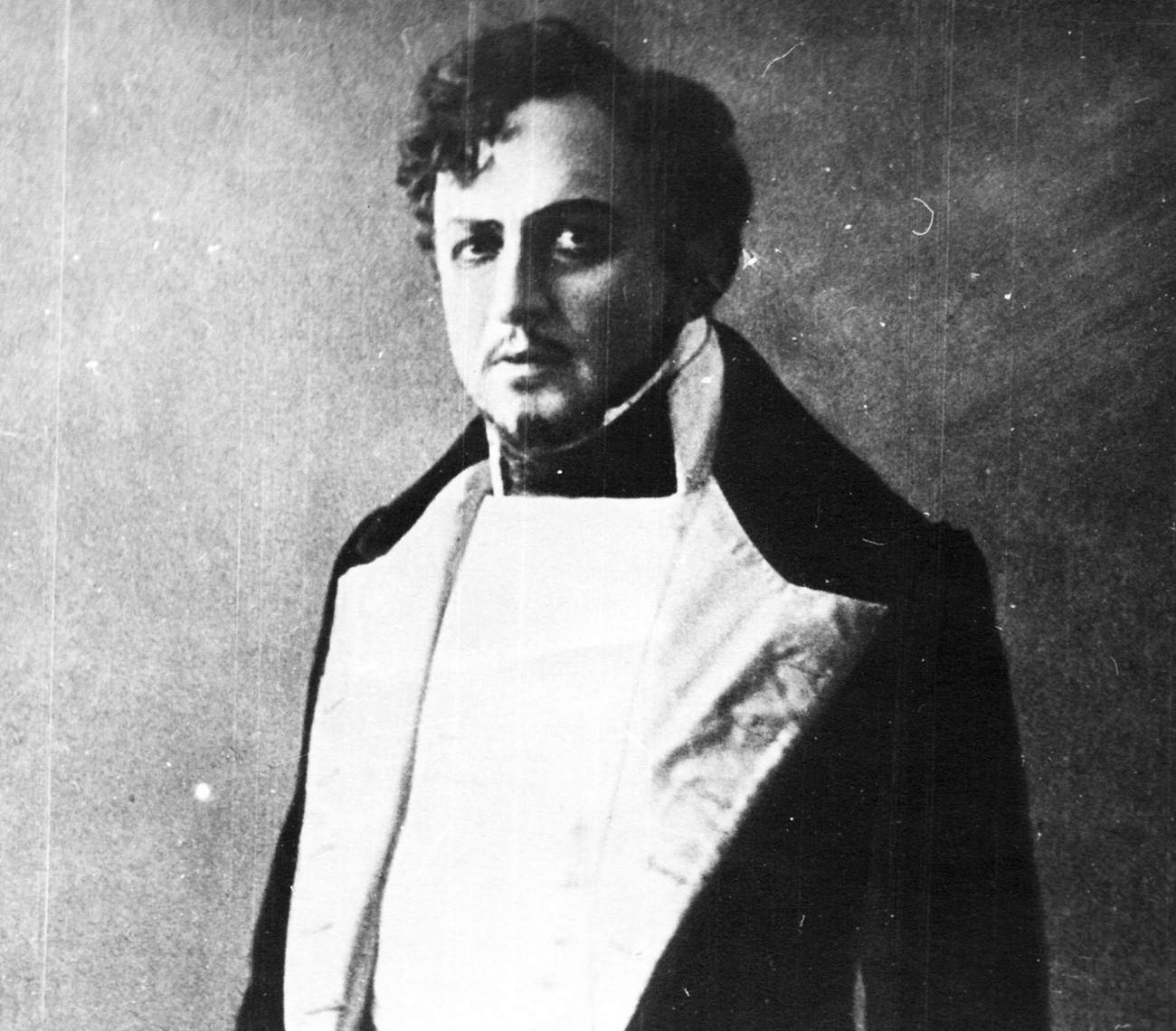 “I even took the risk of going to Alexandrinsky Theatre for Yuriev's [one of the theater's leading actors] benefit performance,” wrote Mathilde Kschessinska, a ballerina and, reportedly, Tsar Nicholas II's mistress. “Meyerhold was premiering Lermontov's Masquerade. The streets were quiet, so I had no problems taking a cab to the theater and back.” 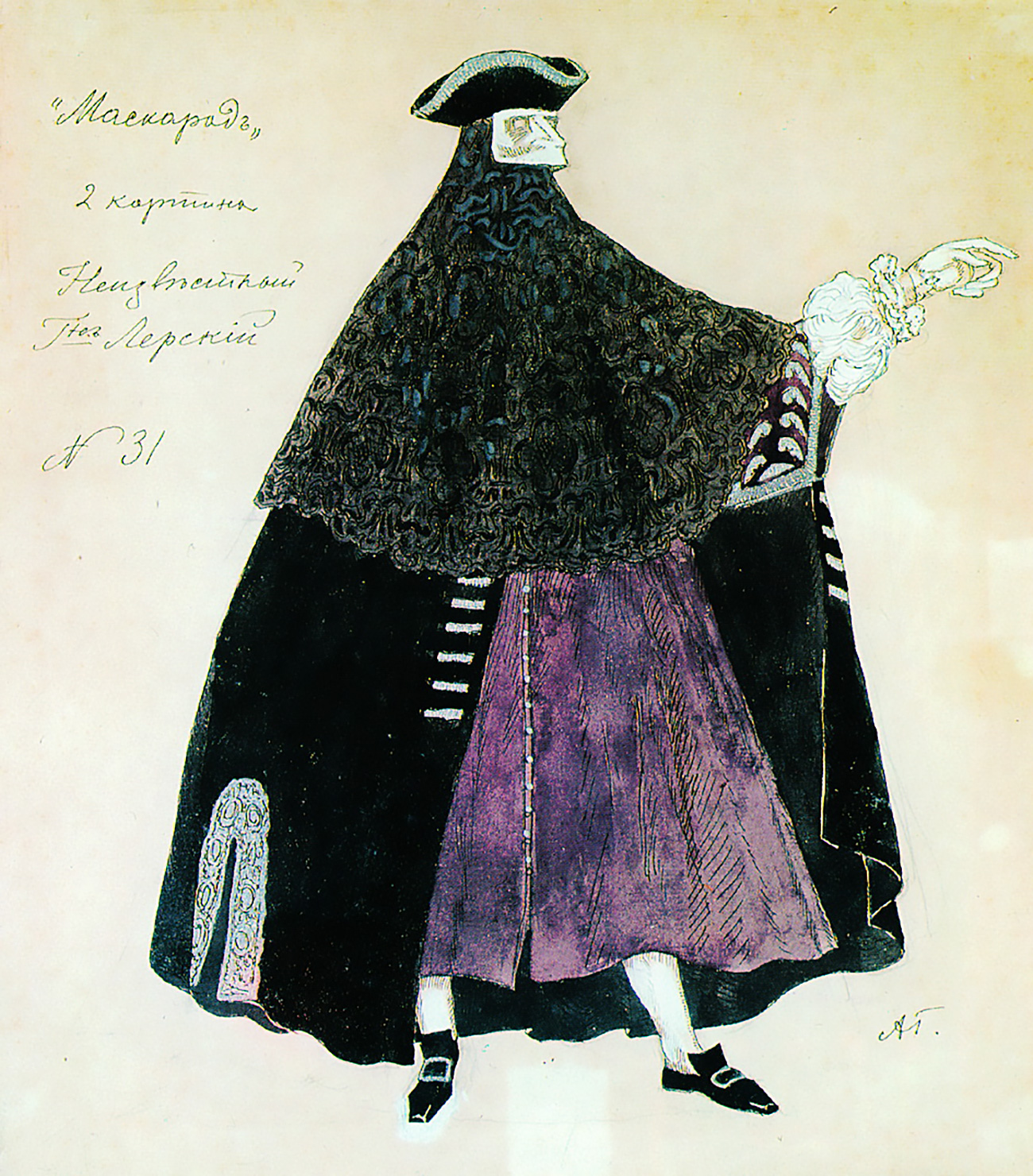 Ivanov-Razumnik remarked: “That Alexandrinsky Theatre put Lermontov's Masquerade on was a truly horrific symbol. Because, if we look back at the past few years, what is this life of the elites, of the mentally degrading society, if not a masquerade? One may tap into real life in the bowels of the city, or in a village in the middle of nowhere, without having an opportunity to describe that life in plain words. High on top, however, it is a reign of dull cadavers, 'darling spectres,' multifarious 'chiromancy.' A tragic masquerade of Russian life.” 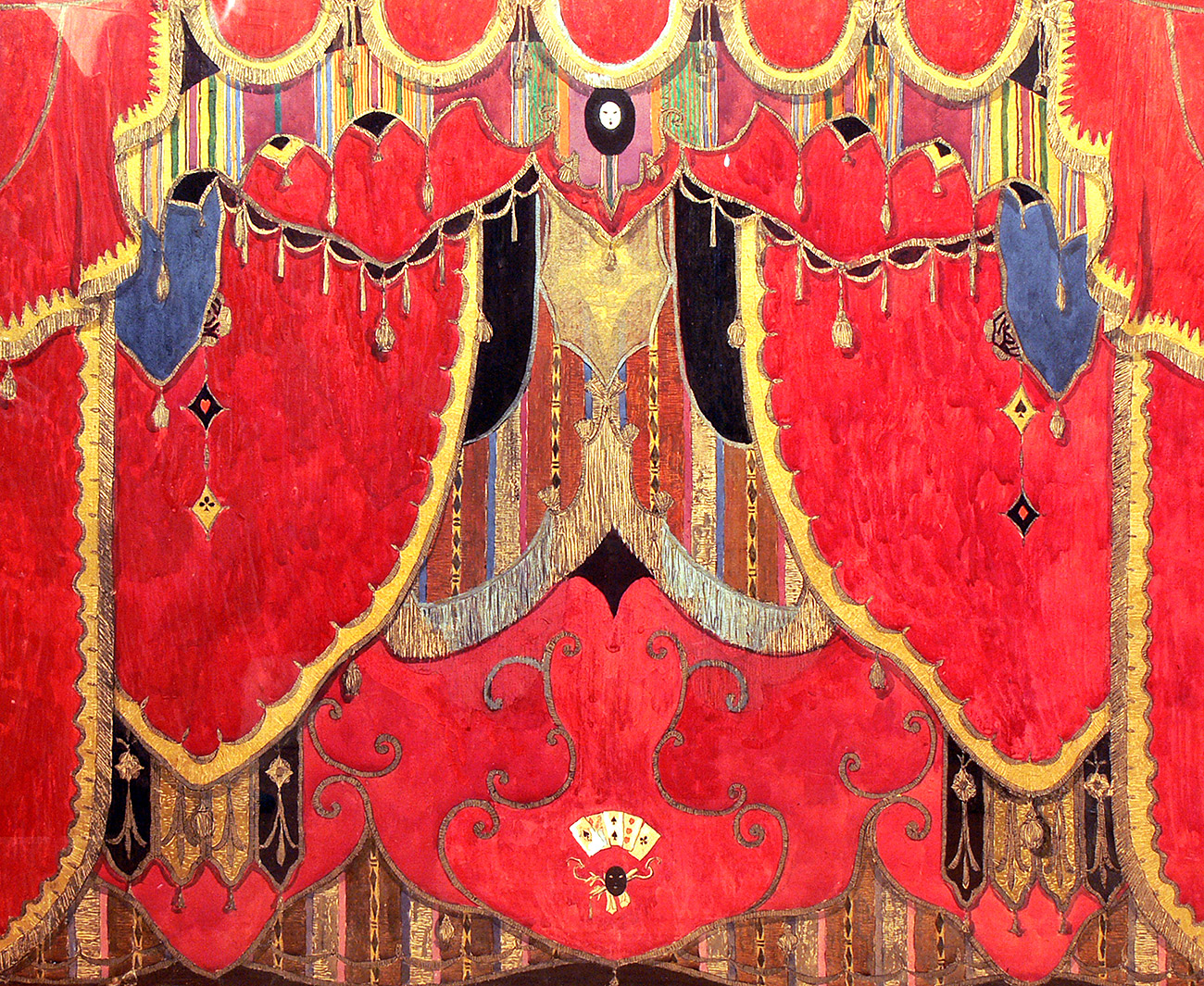 “Having squeezed my way out from the ‘behind-the-curtains crowd’ and taken the actors' exit onto the street, I noticed, with surprise, that there was not a single cab, not a single car around the theater,” theatrical artist Yuri Annenkov wrote. “The square in front of the theater was empty. I took several steps, and then a machine-gun suddenly opened fire somewhere nearby. I crossed the desolate breadth of Nevsky Prospect with apprehension, turned a corner and saw in front of me barricades built of overturned sleds, crates, and lampposts. Everything became clear: This was a revolution.” 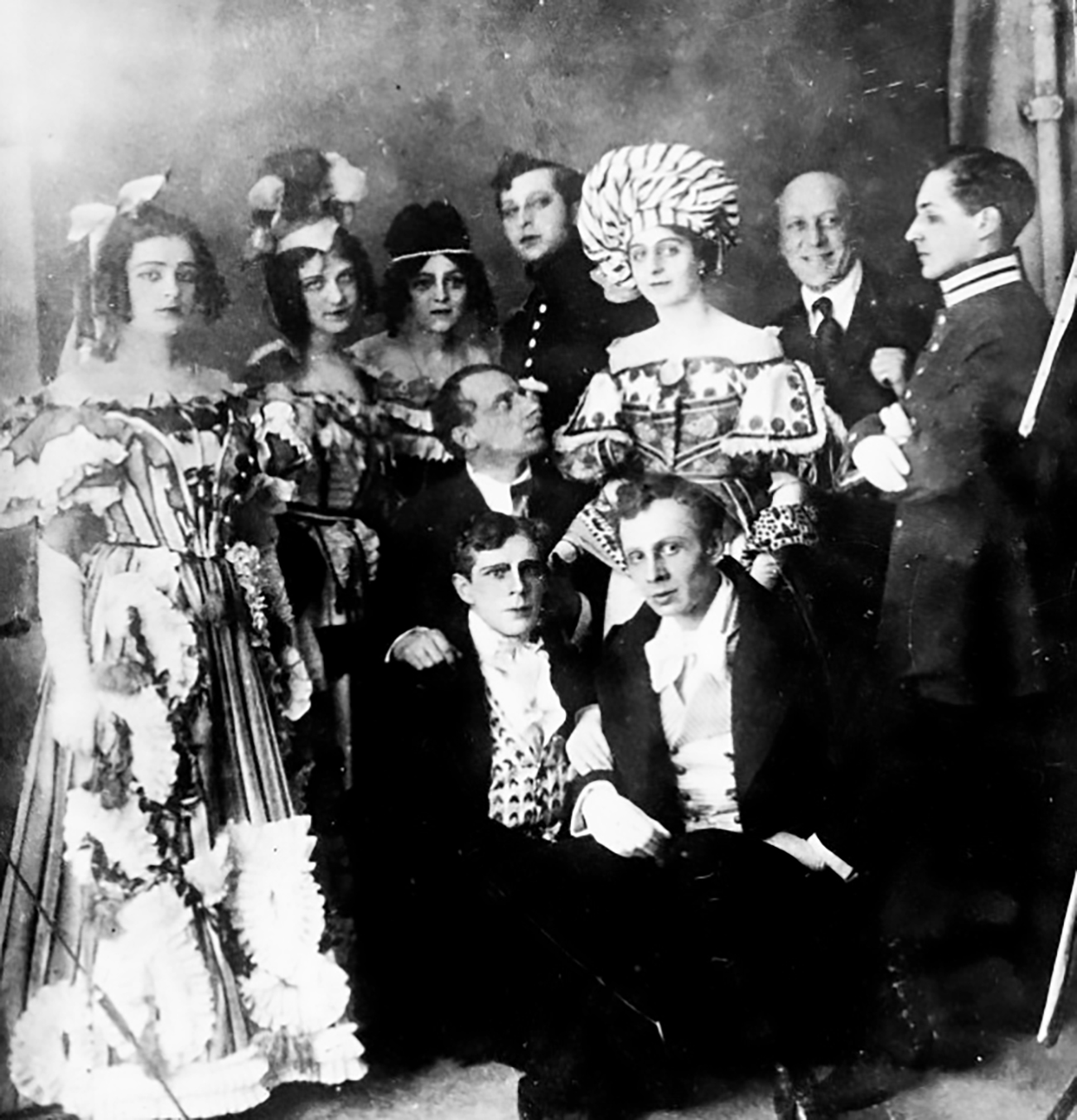 Masquerade was one of the main productions by Vsevolod Meyerhold, a renowned theatrical director who went on to head Revolution Theater. In 1940, following three weeks of torture, Meyerhold was executed. The legendary performance – under interpretation of director Valery Fokin – will be on stage under the name Masquerade. Remembrances of the Future on Sept. 9 and 10 at Moscow’s Bolshoi Theater, before going to St. Petersburg’s Alexandrinsky Theatre in October.

Vsevolod Meyerhold created a special kind of theater that came to succeed folk performances on squares. The theater of the grotesque, as it would later be called, presumed utterly visual, bright and physically complex action.It incorporated both dance and circus routines and cumbersome constructivist designs, which organized the stage space. One of the successful works of him as a director was his futuristic production Mystery-Bouffe, based on Mayakovsky's play of the same name.Meyerhold also developed a system of work with the actors, the so-called "biomechanics", which became one of the strong points in Brecht's dramaturgy. The key element was the physical development of the role. Artists primarily mastered the gestures inherent to the character – it was through the precise movement that psychological similarity of the actor and the character was achieved.