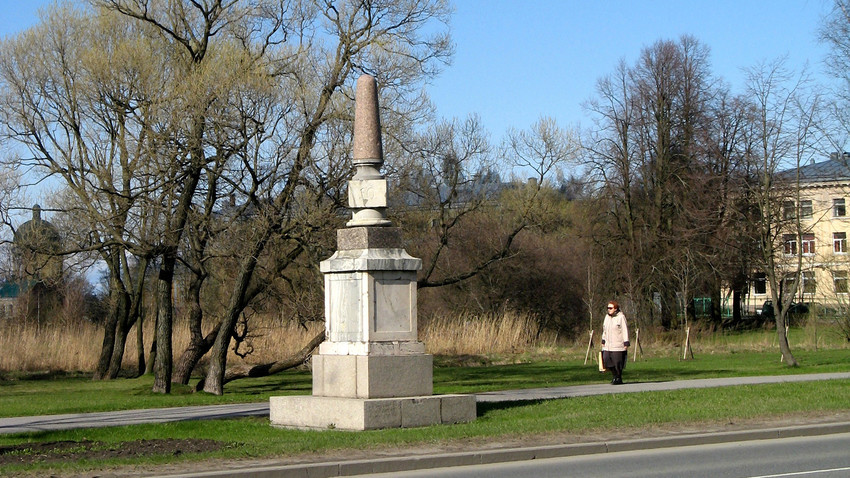 The milepost in Strelna, St. Petersburg.

Yekaterina Borisova / Wikipedia
They were manufactured in workshops in St. Isaac's Cathedral.

In the middle of the 17th century, along the road from Moscow to the summer residence of Tsar Aleksei Mikhailovich in Kolomenskoye, wooden mileposts were erected to designate the distance to the final point. The first mileposts on the roads of St. Petersburg were also wooden.

On Sept. 22, 1794 the commission for stone construction of St. Petersburg and Moscow decided to improve the main entrance ways to the capital, and replace wooden mileposts with stone ones. These were road markers in the form of obelisks made of granite or marble.

One Russian mile (verst) was 1.0668 kilometers, and the first such verst pole appeared in St. Petersburg in 1774 on the bank of the Fontanka River near the Triumphal Gates. The first road on which stone poles were installed divided the path from Moscow to Kolomna. In the same year, they appeared along the road from St. Petersburg to Tsarskoe Selo.

The last stone milepost was installed on the border of the Catherine Park near the Orlovskie Gate. Verst poles were made in the workshops of St. Isaac's Cathedral. The first and the last poles got sundials. The preserved poles were restored in 1970-1990.

Russian architecture On this day