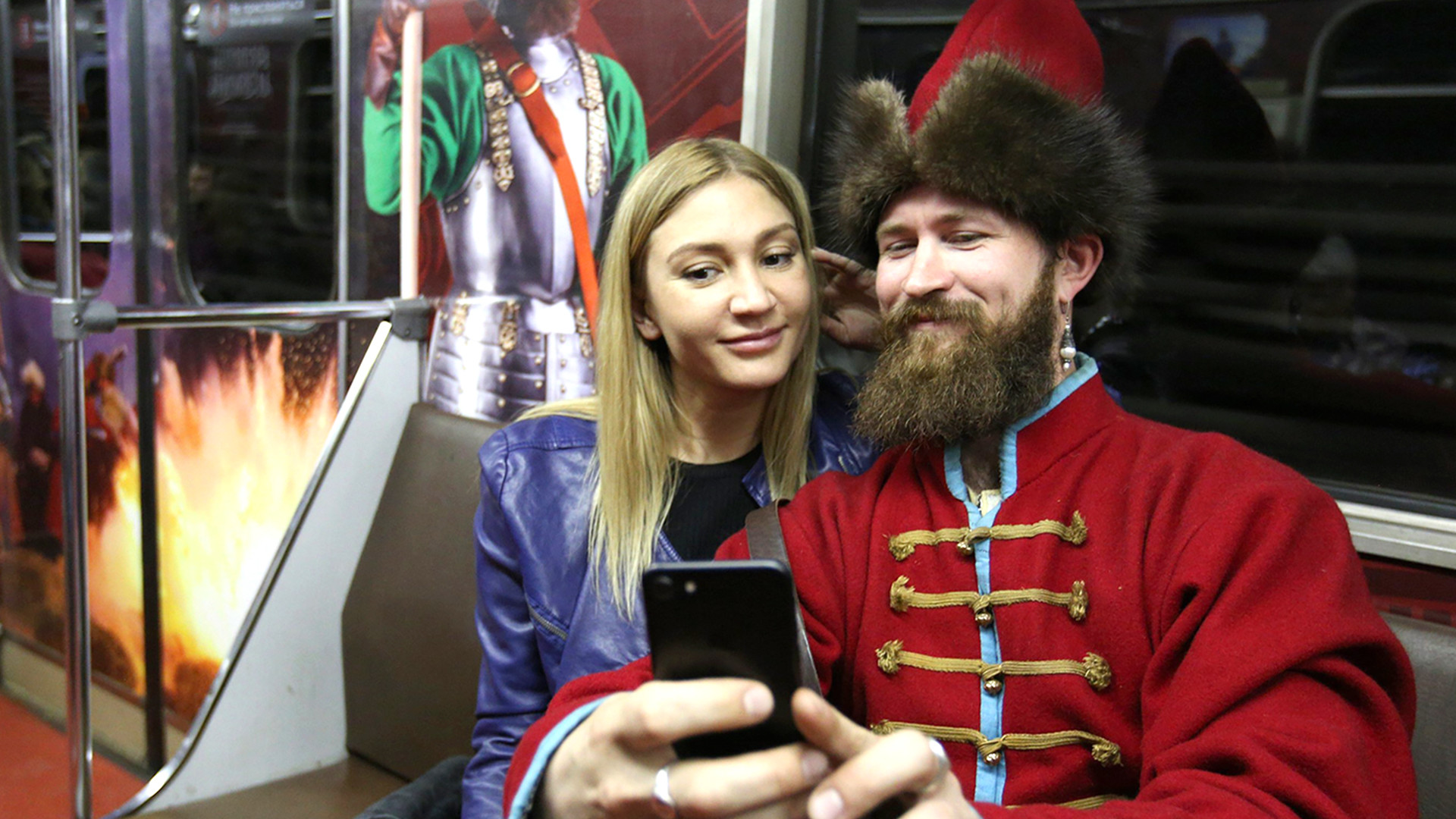 Kirill Zykov/Moskva Agency
The Russian capital’s underground trains may look the same, but if you’re lucky you might catch a special themed carriage dedicated to the country’s history and culture. There are several of these trains currently operating on Moscow’s metro system, each with their own unique decorations. See how many you can find.

25 years for the life 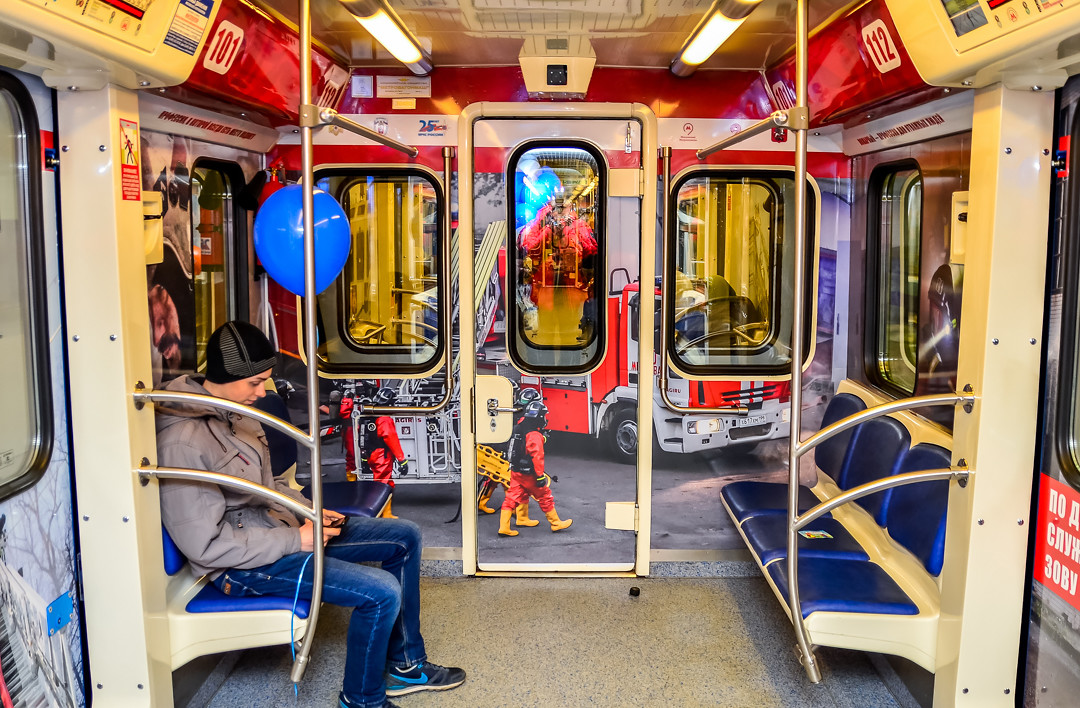 The train was dedicated to the 25th anniversary of the Russian Ministry of Emergency Situations (EMERCOM) and was launched in 2015. The exhibition inside the train showed rare photos and facts about the Ministry’s history. This thematic train was taken off the tracks in 2017. 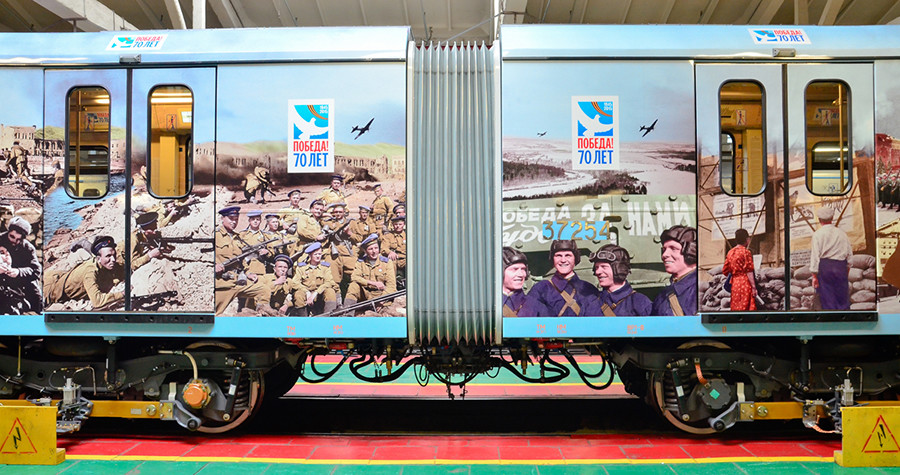 This train was coined “70 years of the Great Victory” and set in motion in 2015 to commemorate the anniversary of the victory over Nazi Germany. Inside the wagons are photos, documents, and posters from the war. In 2016, symbols of the anniversary were removed and the train was given a new name: “Train of Victory.” You can find it on the Purple Line. 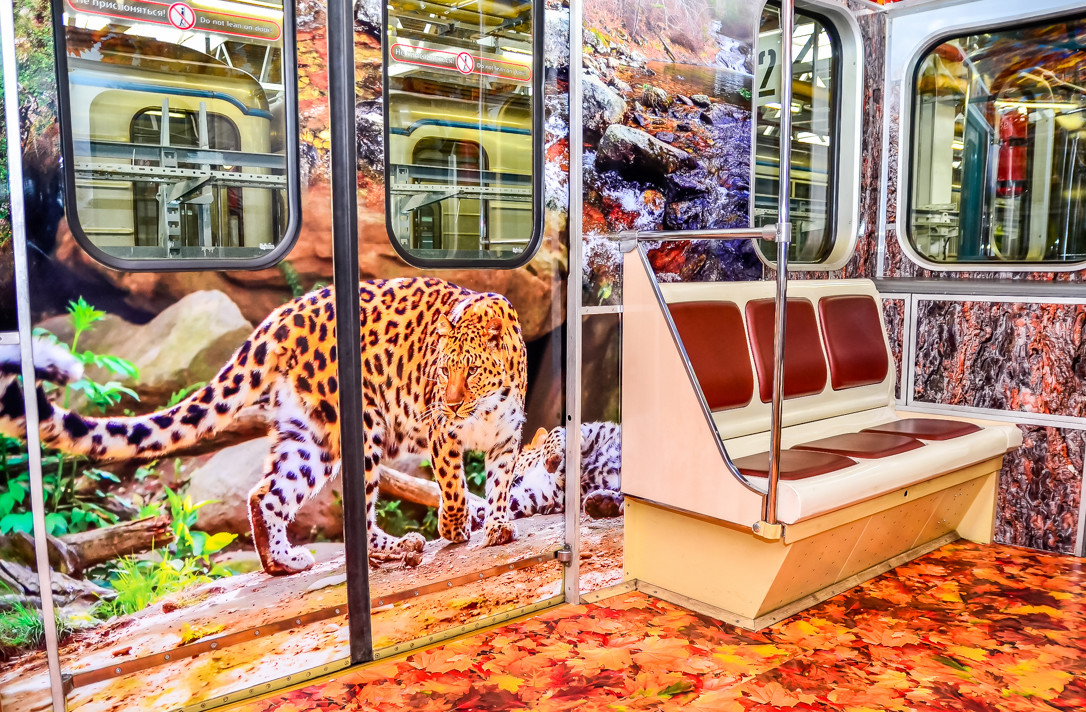 In 2015, this train dedicated to Amur tigers was put into operation. The interior was decked out with images of the striped beast, Amur leopards, and nature from Russia’s Far East. In 2017, the train’s stripes were removed. 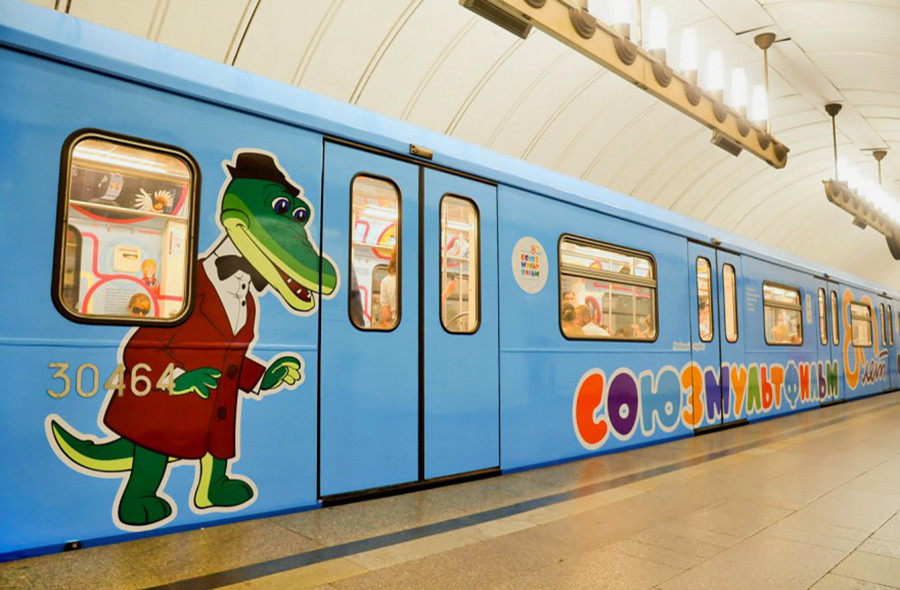 A special train was launched for a year in 2016 to honor the 80th anniversary of the largest Soviet and Russian state animation studio Soyuzmultfilm (Union Cartoon). Popular characters from Soviet cartoons, including the legendary Cheburashka, adorned the outside of the carriages. Inside, you could read interesting facts about creation of the animated movies. 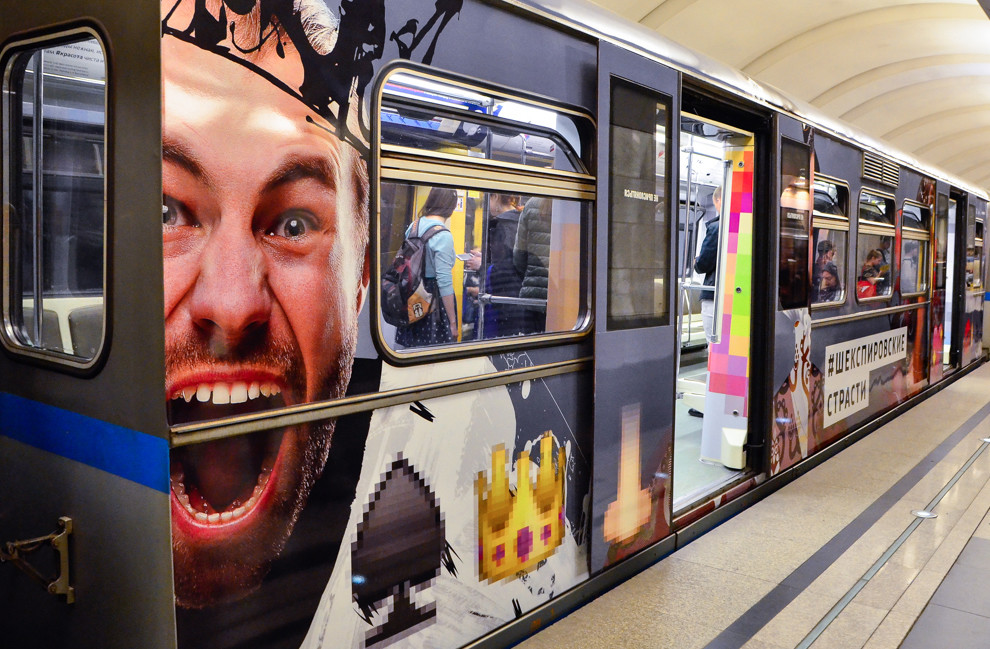 The train was commissioned to celebrate the UK-Russia Year of Language and Literature and the 400th anniversary of Shakespeare's death in 2016. Passengers of the train that hugs the Blue Line can read the poet’s works on the walls and see photos of people dressed in clothes from Shakespeare’s era. A Purebred British Shorthair cat was the first passenger of this train. 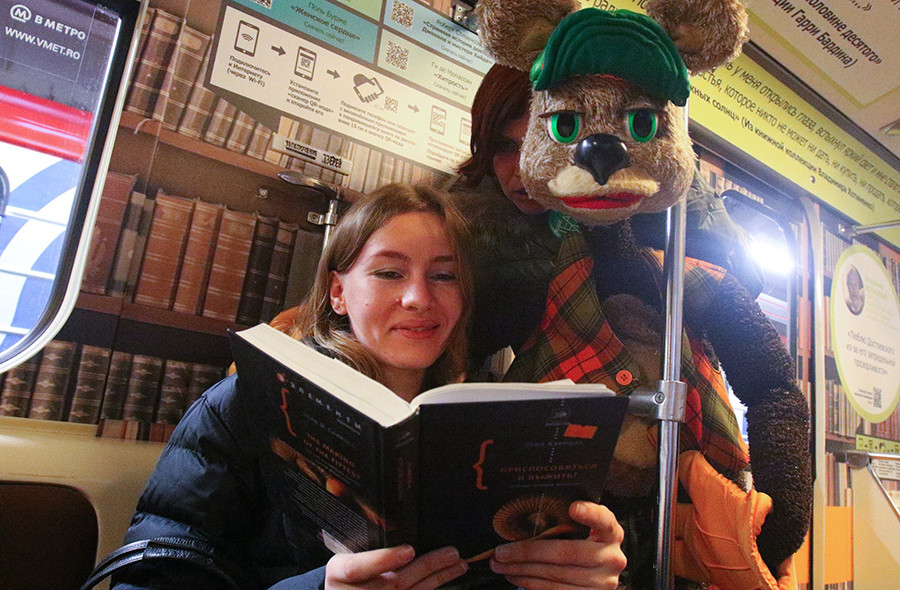 Another train dedicated to literature can be taken on the Orange Line. Wagons are decorated like library halls, with huge images of bookshelves. There are also images of manuscripts, extracts from book, and quotes by the world’s classic authors. The stops are voiced by Dmitry Glukhovsky, who wrote the bestseller “Metro-2033.” 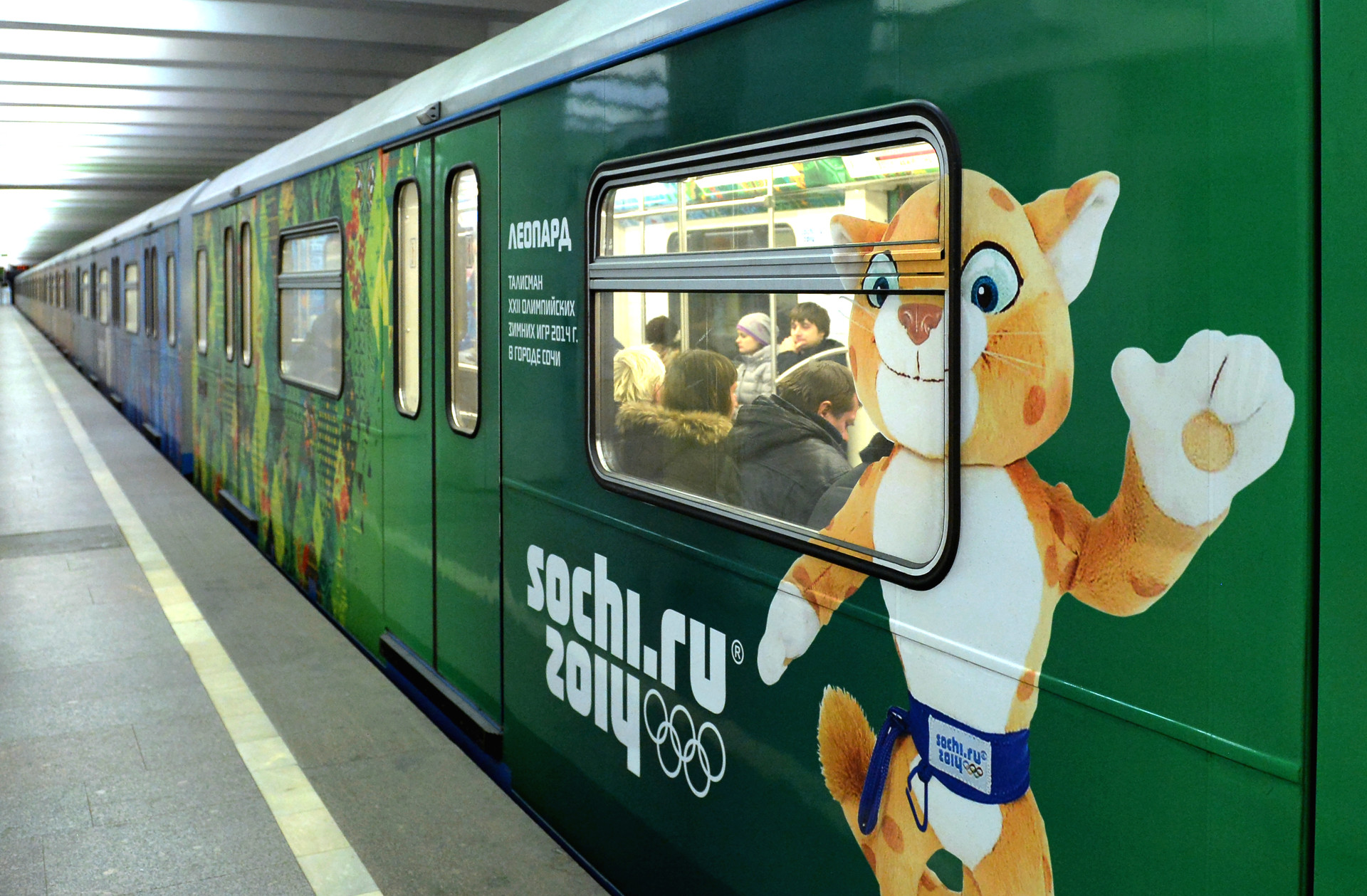 Launched in 2014, this train brought the Sochi Olympics and Paralympics to Muscovites. The Olympic mascots were shown inside: A polar bear, snow hare, and snow leopard. The train was decommissioned the same year. 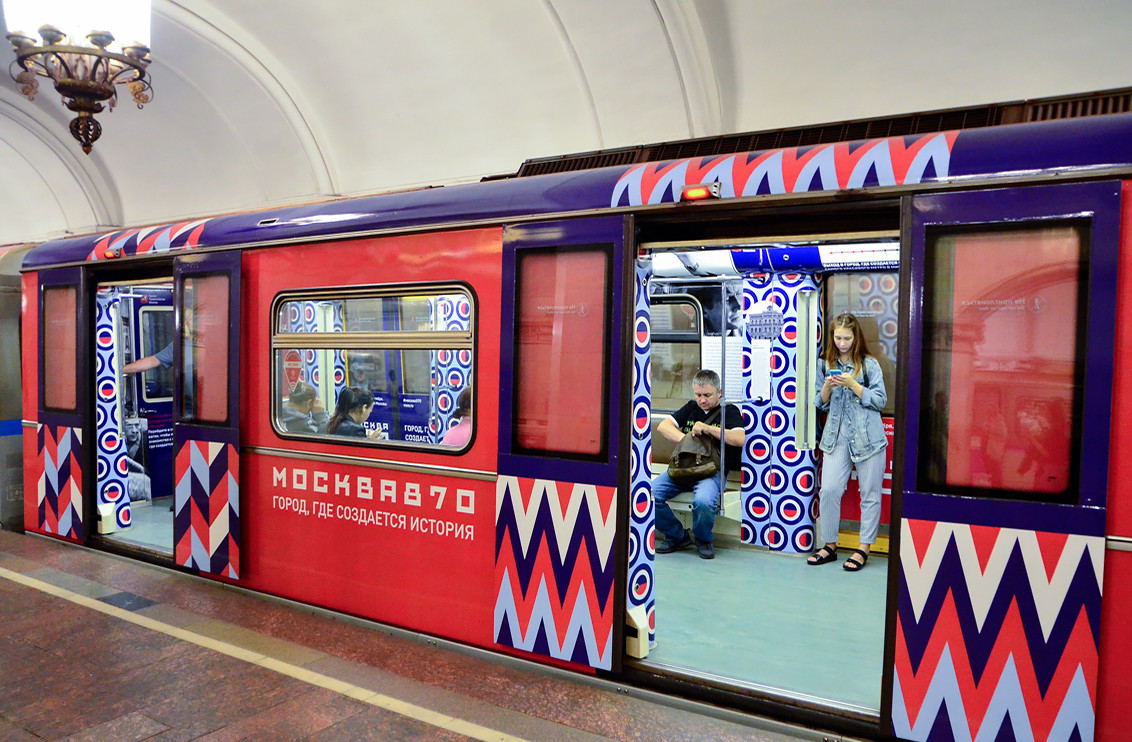 The train was launched on the Circle Line to commemorate the 870th anniversary of the Russian capital, celebrated in 2017. One can find portraits of outstanding scientists, poets, and sportsmen etc., who had a connected to Moscow. Each portrait is accompanied with quotes and interesting facts about each character. 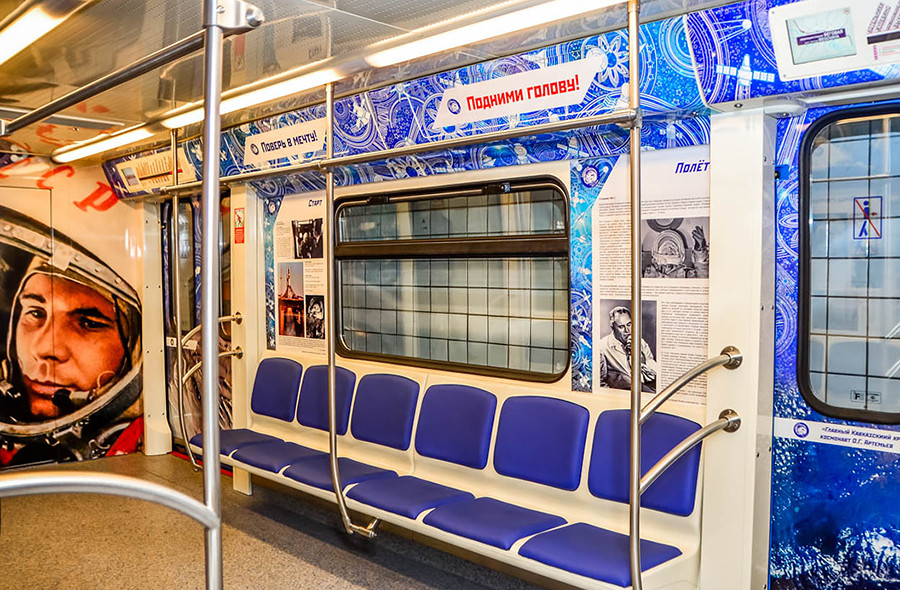 To mark 55th anniversary of Yuri Gagarin’s flight into space, the “Space Train” was launched in 2016 on the Purple Line. The starry sky, spaceships, and planets adorned the outside of the wagons. Inside, you can learn about the history of Soviet and Russian cosmonautics, spaceports, satellites, and much more. When the doors close, passengers can hear Gagarin’s iconic “Poekhali!” (Let’s go!).

Russia Focused on the Future 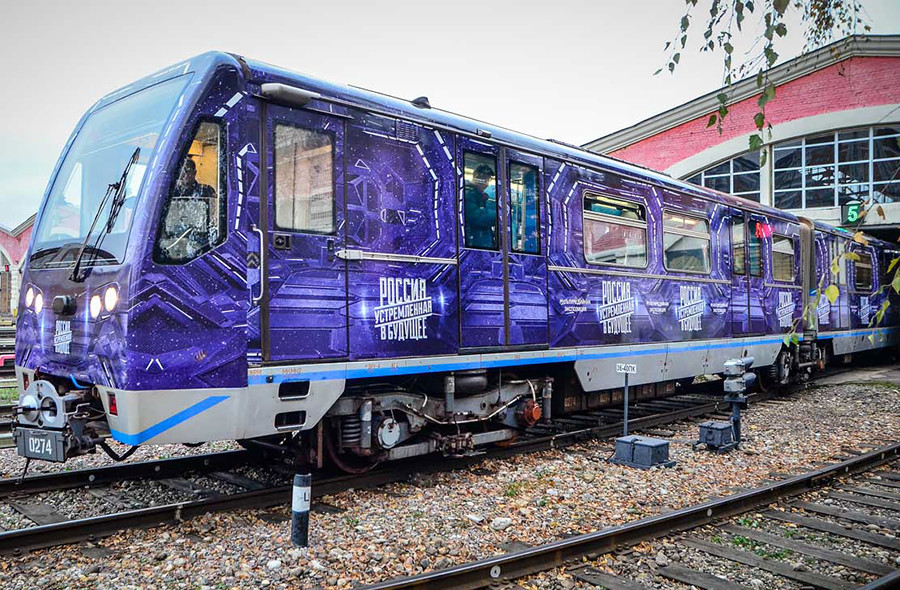 This is the newest among the thematic trains, launched on Nov.7, 2017 on the Circle Line. The decoration of the wagons is dedicated to scientific achievements in industry, ecology, IT, transport, and other areas. The train was named after the exhibition of the same name, recently held in Moscow.