10 international masterpieces you can see only in Russia 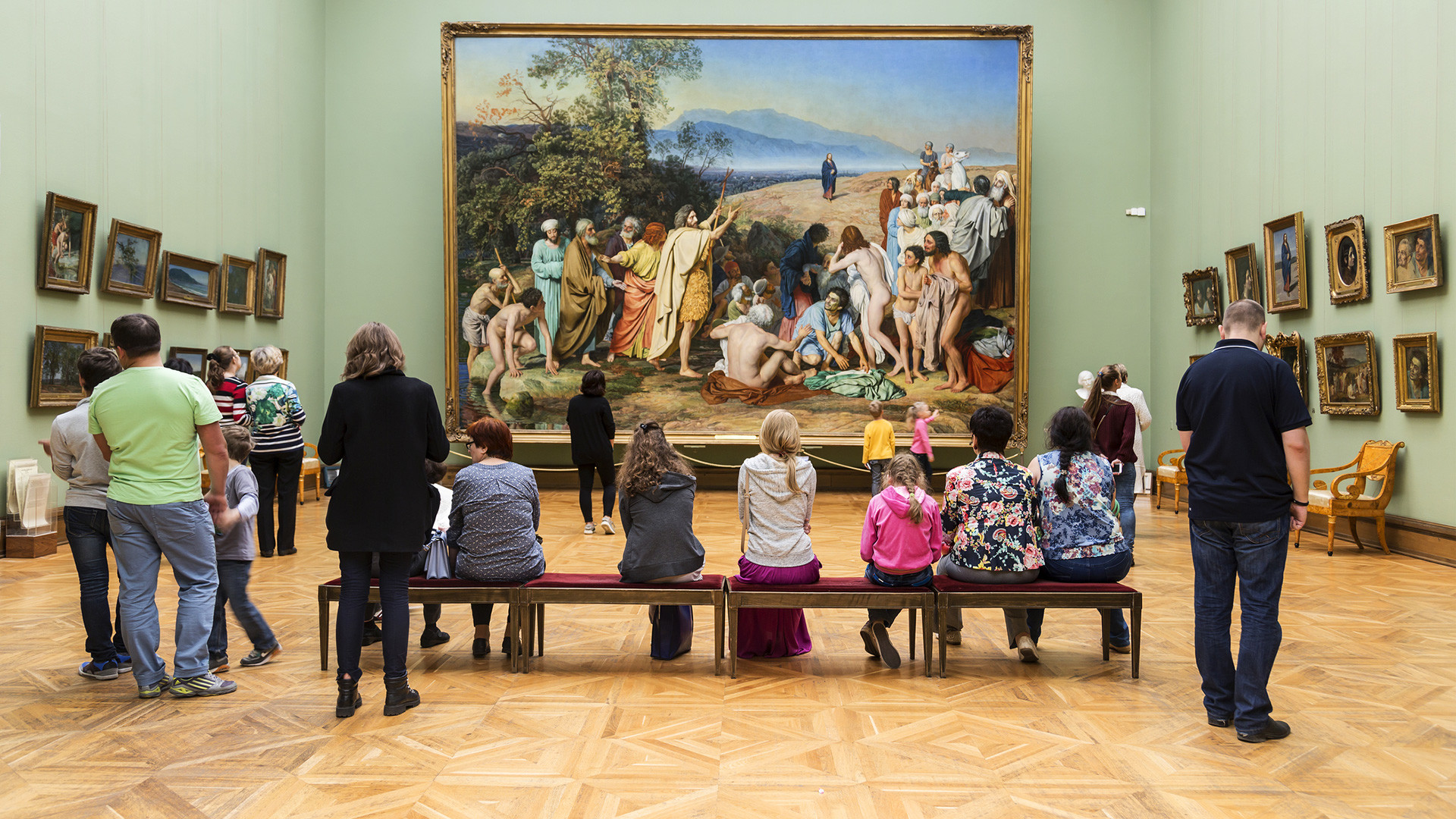 Legion Media
For various reasons, they never venture beyond their museum walls.

Every museum in the world seeks to earn a buck or two by renting out its exhibits, donating them to other institutions for temporary exhibitions. But each harbors a collection of undisputed masterpieces that never leave the museum. They are either the “face” of the museum, like the Mona Lisa in the Louvre, or of such venerable age or dimensions that the curators faint at the thought of moving them. Here are some of Russia’s immovable museum highlights.

1. The Great Imperial Crown of the Russian Empire — The Diamond Fund of the Moscow 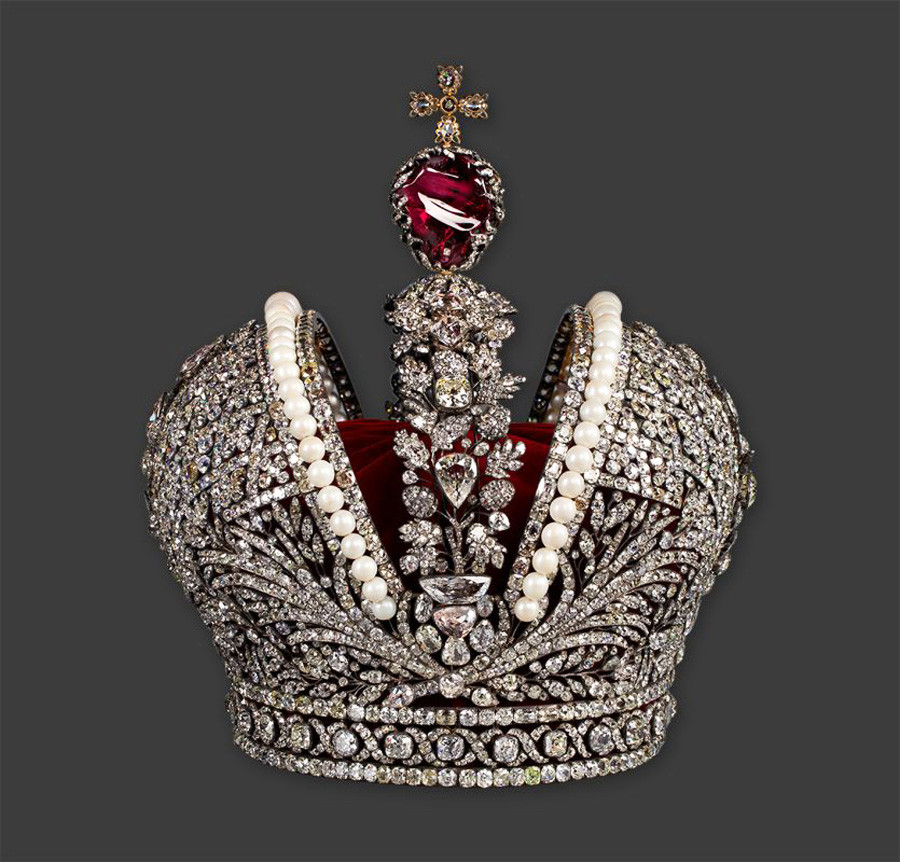 Imperial Crown replaced the no less legendary Monomakh’s (or Golden) Cap as the main dynastic regalia of the Russian . The crown was made in 1762 for the coronation of Catherine the Great, lover of luxury and creator of the Hermitage. Court jewelers Jérémie Pauzié and Georg Friedrich Ekart worked on it for two whole months. The two-kilo hat is decorated with 4,936 diamonds, 75 pearls, and a huge red spinel weighing 398.7 carats. 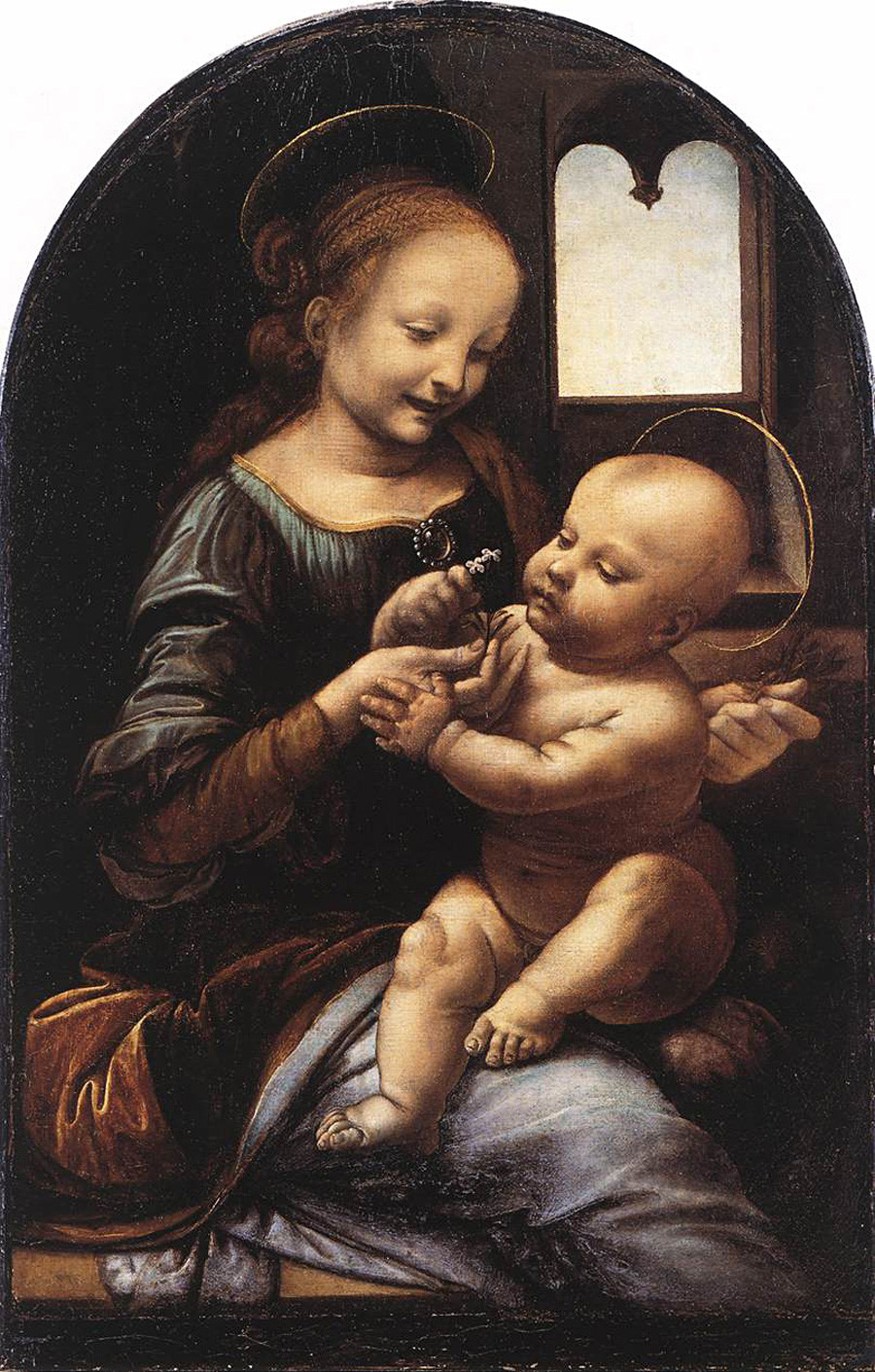 small (48 x 31 cm) picture is one of two undisputed works by Leonardo that are kept in Russia. The canvas was previously called Madonna and Child with Flowers, but after its purchase by Nicholas II it was renamed in honor of its previous owner Leonty Benoit, one of the Hermitage architects. And while the Hermitage’s second piece by the Renaissance genius sometimes goes on tour, the fragile state of this work means that it always remains behind bulletproof glass in St. Petersburg. 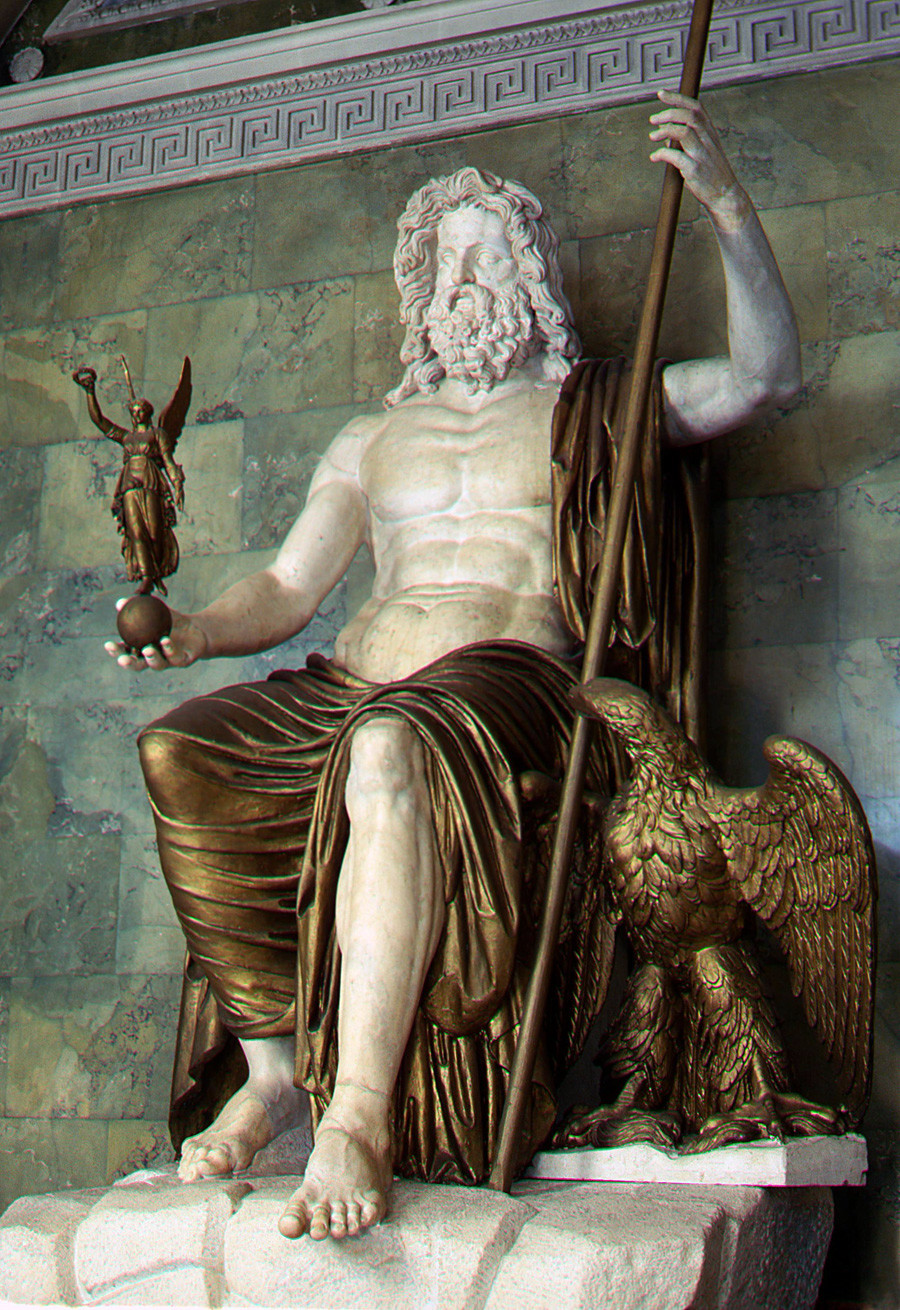 separate hall was built for this huge ancient Roman statue (around 5 meters high, including the pedestal), yet even in disassembled form, it could not pass through the museum’s ample doorways. The 20-ton marble work was acquired from the legendary art collection of the Marquis Campana in Rome. According to Hermitage documents, the sculpture, which had been found in the 18th century on the site of a villa belonging to the Roman emperor Domitian in the outskirts of Rome, took 60 people three days to prepare for shipment. 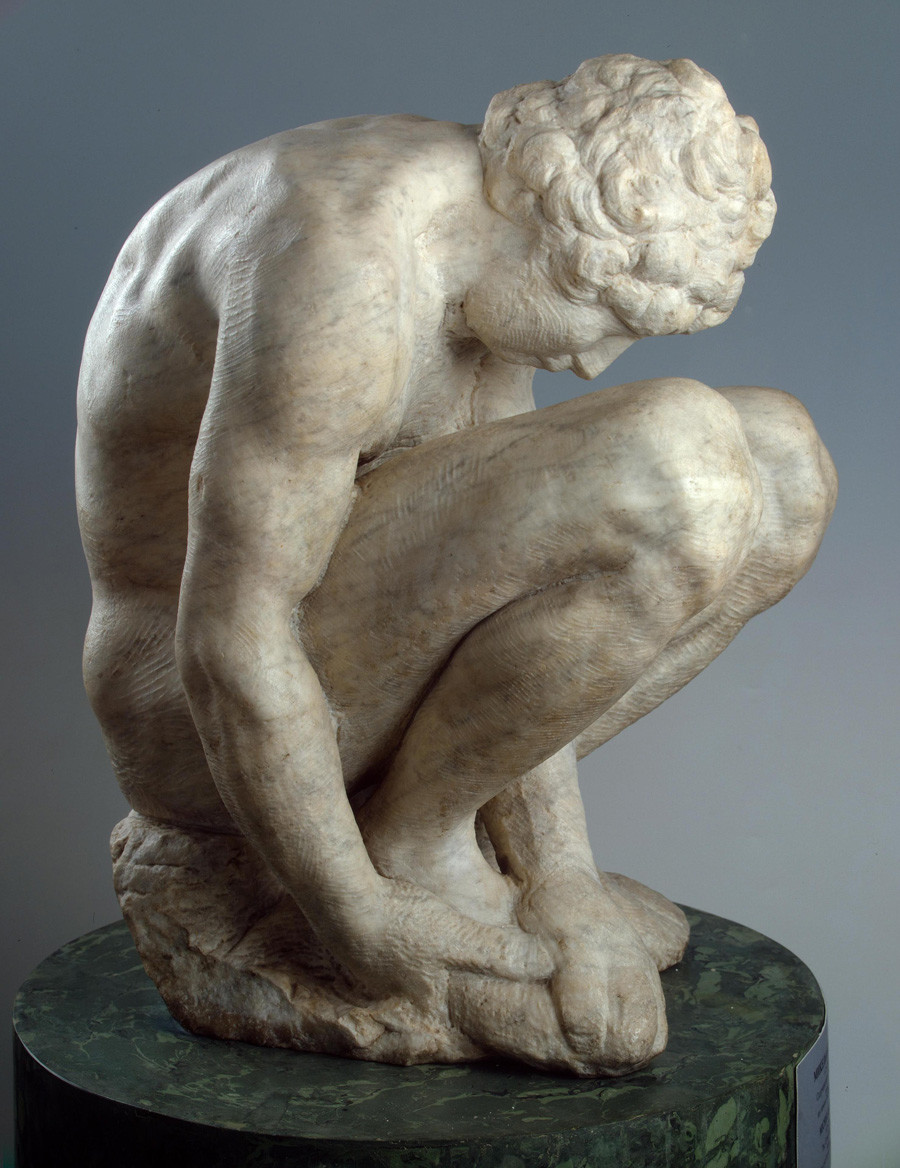 only small sculpture by Michelangelo in Russia is believed to be a draft work for the Medici Chapel at the Basilica of San Lorenzo in Florence. Since being acquired by the founder of the Hermitage, Catherine the Great, the work has not left the halls of the museum. 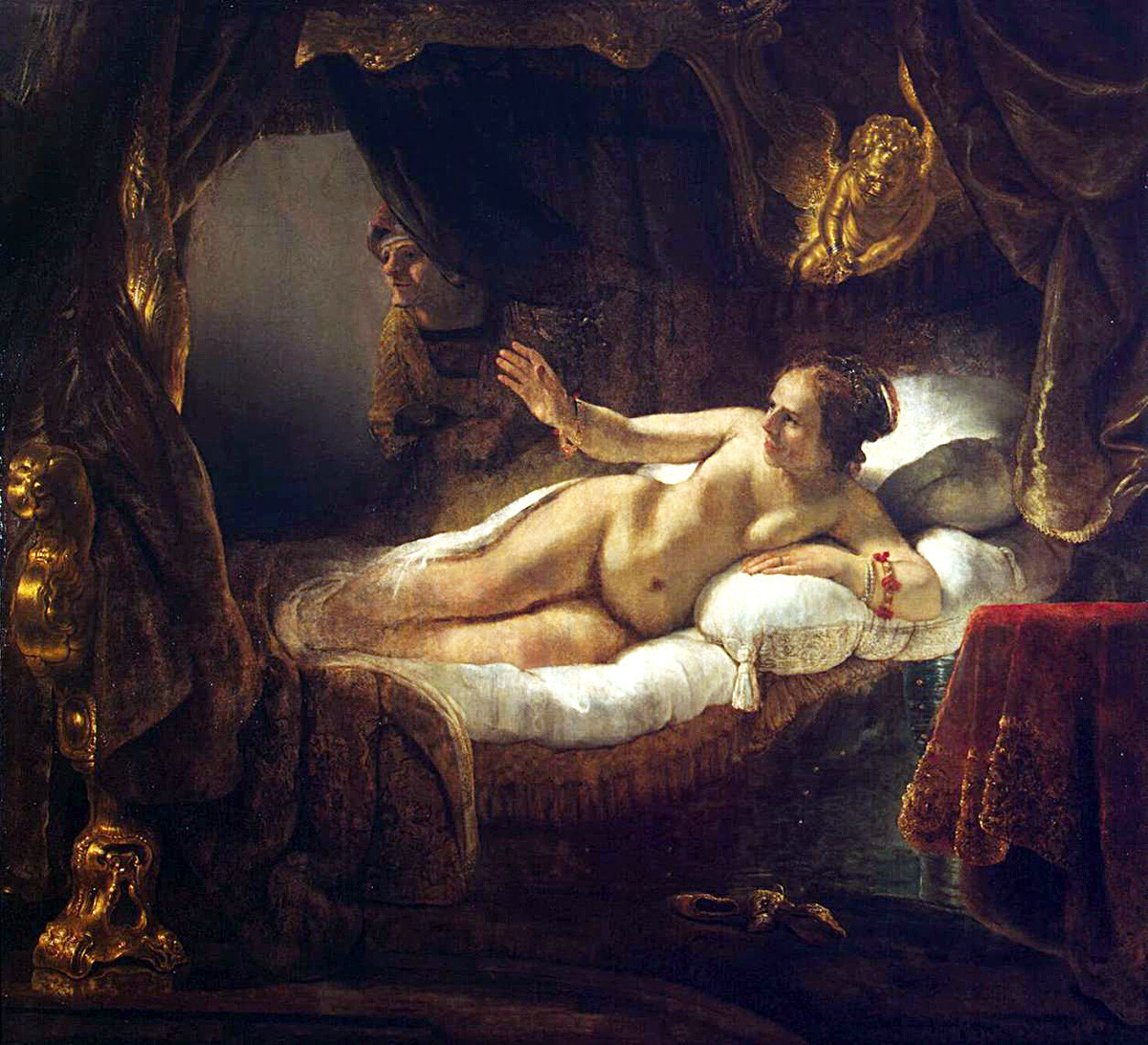 of the Hermitage’s Rembrandt masterpieces became known to the wider world for an unfortunate reason. In 1985, a vandal poured sulfuric acid over the canvas, after which the painting was under restoration for more than 12 years. Since then, the work—in which the artist depicted both his wife and mistress in the face of Danaë—has not left the museum. 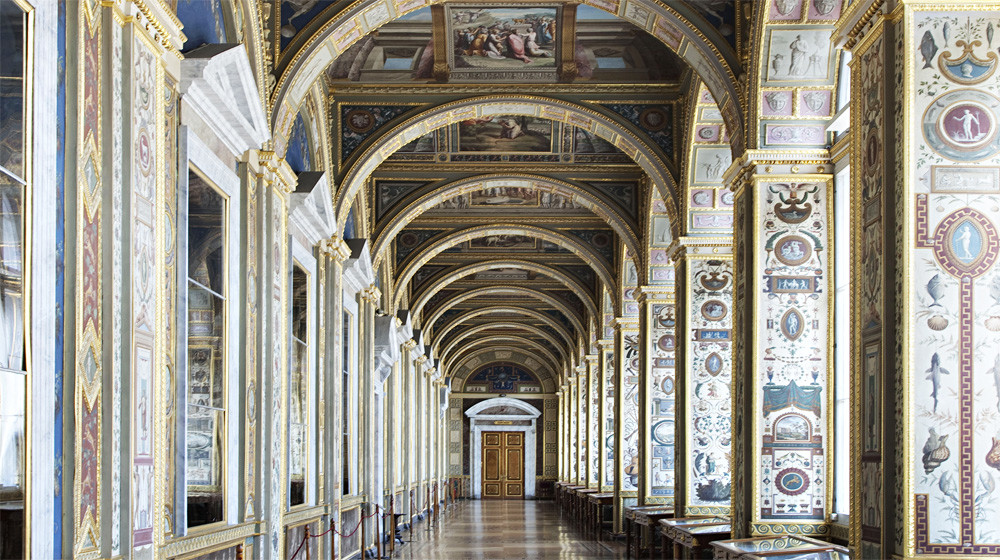 is a rare example of when a copy of a great work of art is no less valuable than the original. The famous loggias at the Vatican were painted by Raphael and his students in 1517-1519. Two-and-a-half centuries later, Catherine the Great, on viewing a series of engravings depicting the loggias, decided to recreate them full-size in the Hermitage, then under construction. Unlike the Vatican loggias (which were glazed only in the 20th century to protect them from the elements), the Russian versions were built as closed galleries from the start, and are thus perfectly preserved. Moreover, the Vatican originals are off-limits to visitors. 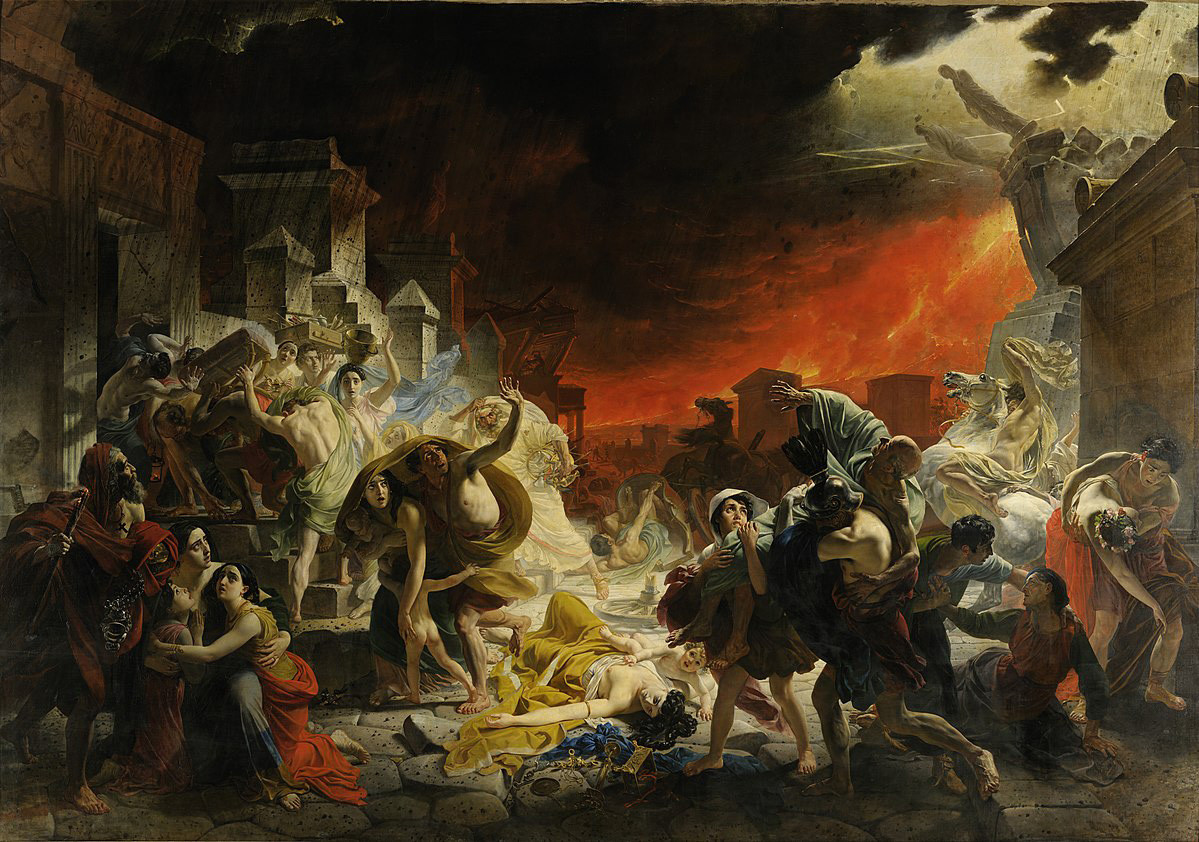 painting, one of Russia’s largest in every sense (456.5 × 651 cm), was created in Italy, where it was met with unprecedented success when exhibited to the public. Immediately acquired by a descendant of the Russian Demidov merchant family, the work was later exhibited at the Louvre in Paris, and then presented to the Hermitage. In 1897, Tsar Alexander III established the Russian Museum, where a special room was built for it and several other large canvases.

8. Alexander Ivanov. The Appearance of Christ before the People — Tretyakov Gallery in Moscow 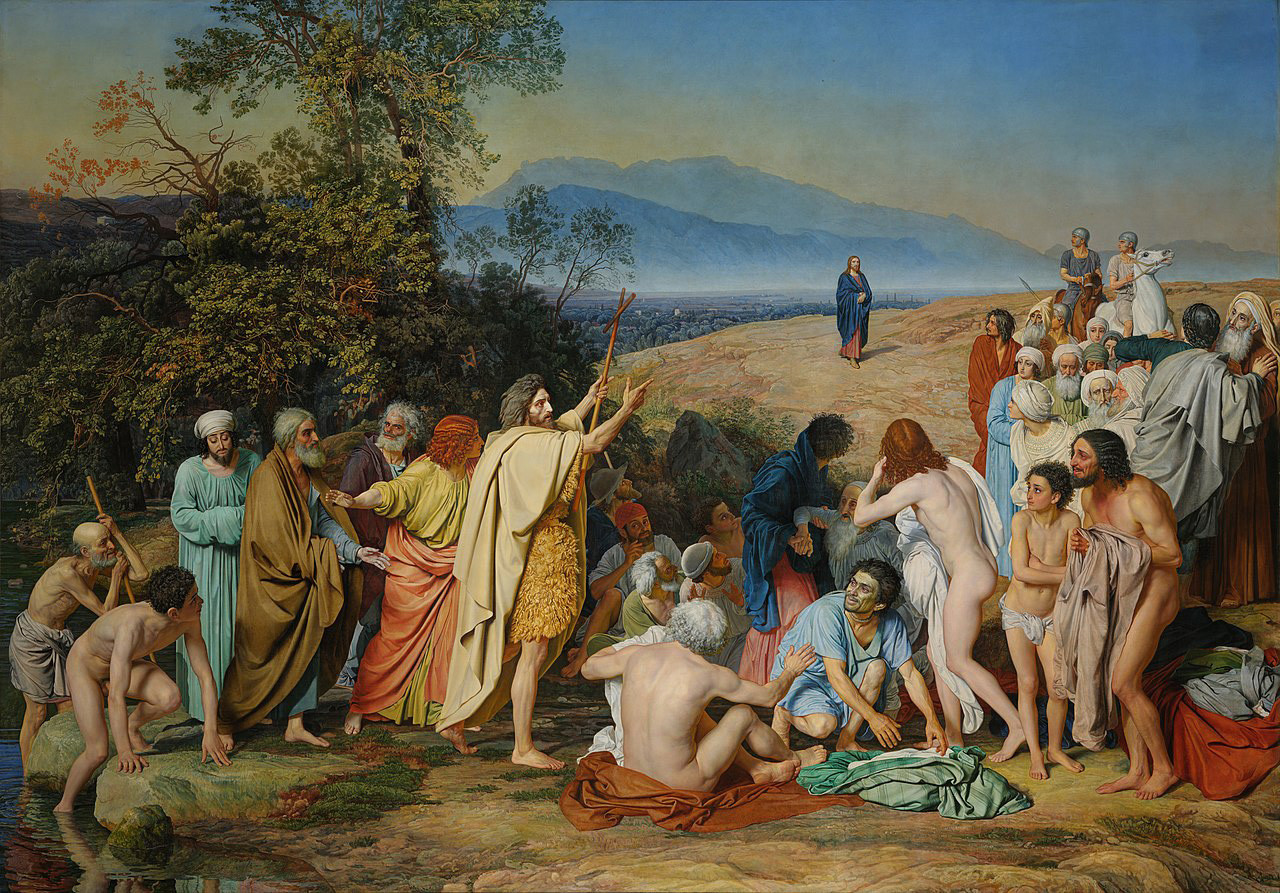 The story of this work is in many ways similar to Bryullov’s canvas The Last Day of Pompeii. It too was painted in Italy (although it took Ivanov 20 years), and a separate pavilion was built for it in Moscow under Alexander II. Today, the giant painting (540 × 750 cm) occupies a special room in the Tretyakov Gallery, and museum director Zelfira Tregulova calls it “the greatest work of Russian art.” 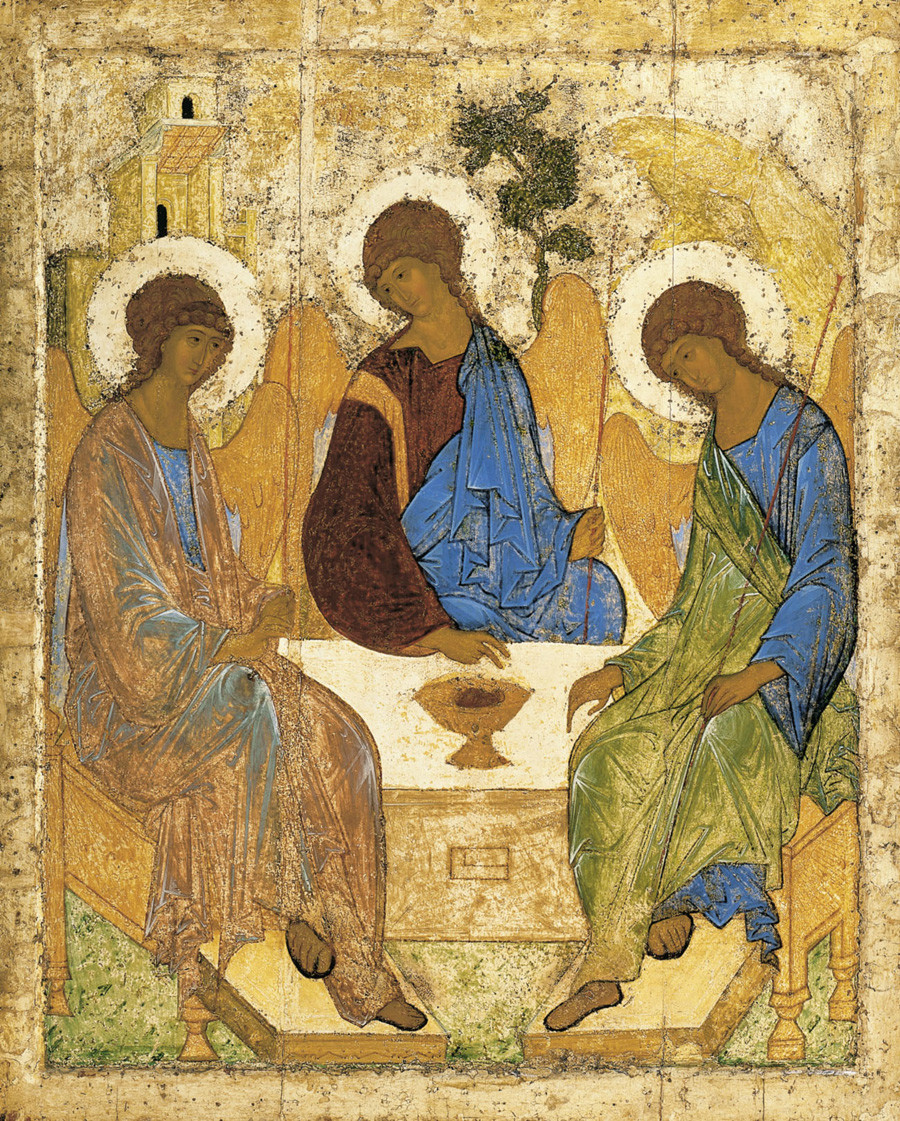 of the most emblematic and celebrated Russian icons, The Trinity dates from the very beginning of the 15th century. Like all works of that time, it is painted on wood, but unfortunately the process of transferring it to canvas is technically infeasible. Therefore, the special storage conditions mean that the masterpiece cannot be taken out of the Tretyakov Gallery in Moscow. 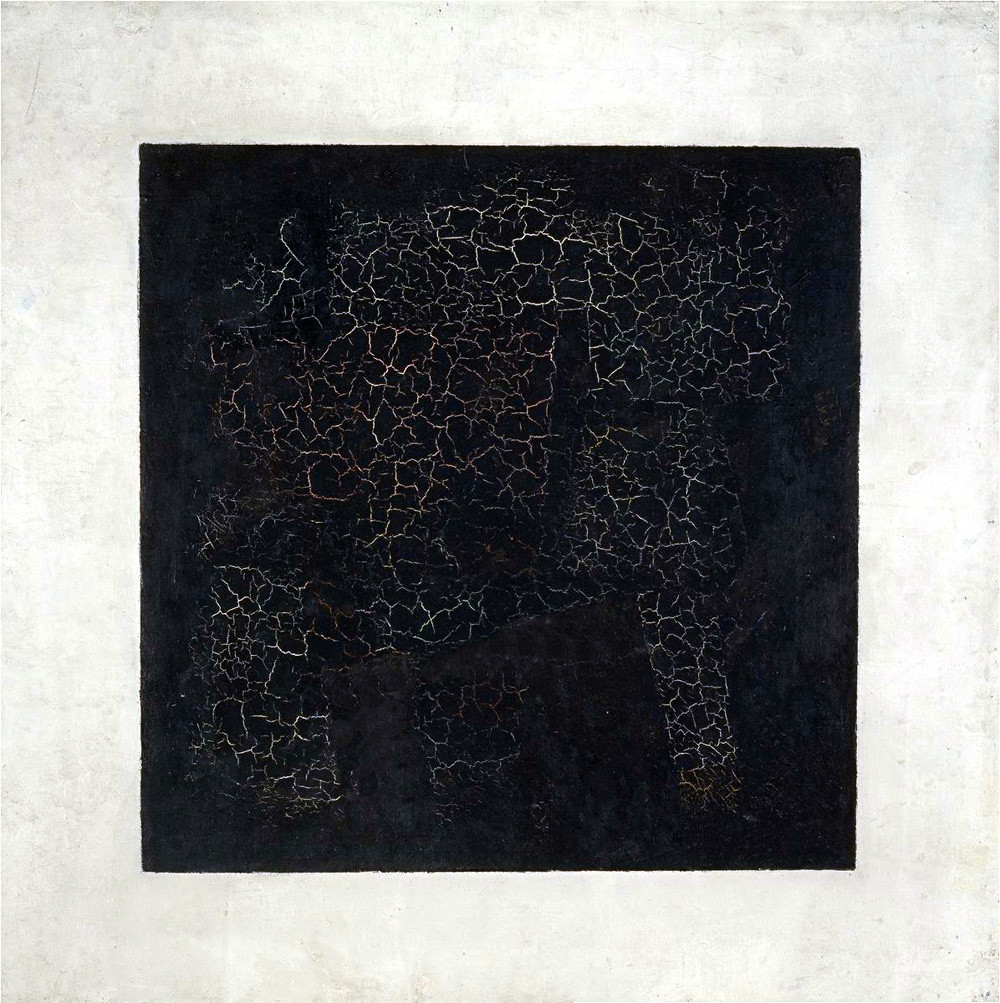 terms of artistic significance, this work by the founder of Suprematism is often compared to the Mona Lisa. The painting is the focal point of the entire building of the New Tretyakov Gallery on Krymsky Val, which houses 20th-21st century Russian art. There exist several versions by the artist himself that travel to international exhibitions, but the original Square, like the “smiling” girl from the Louvre, never leaves home.