Pepelangelo: an artist from St. Petersburg is turning the Pepe the Frog meme into classic art 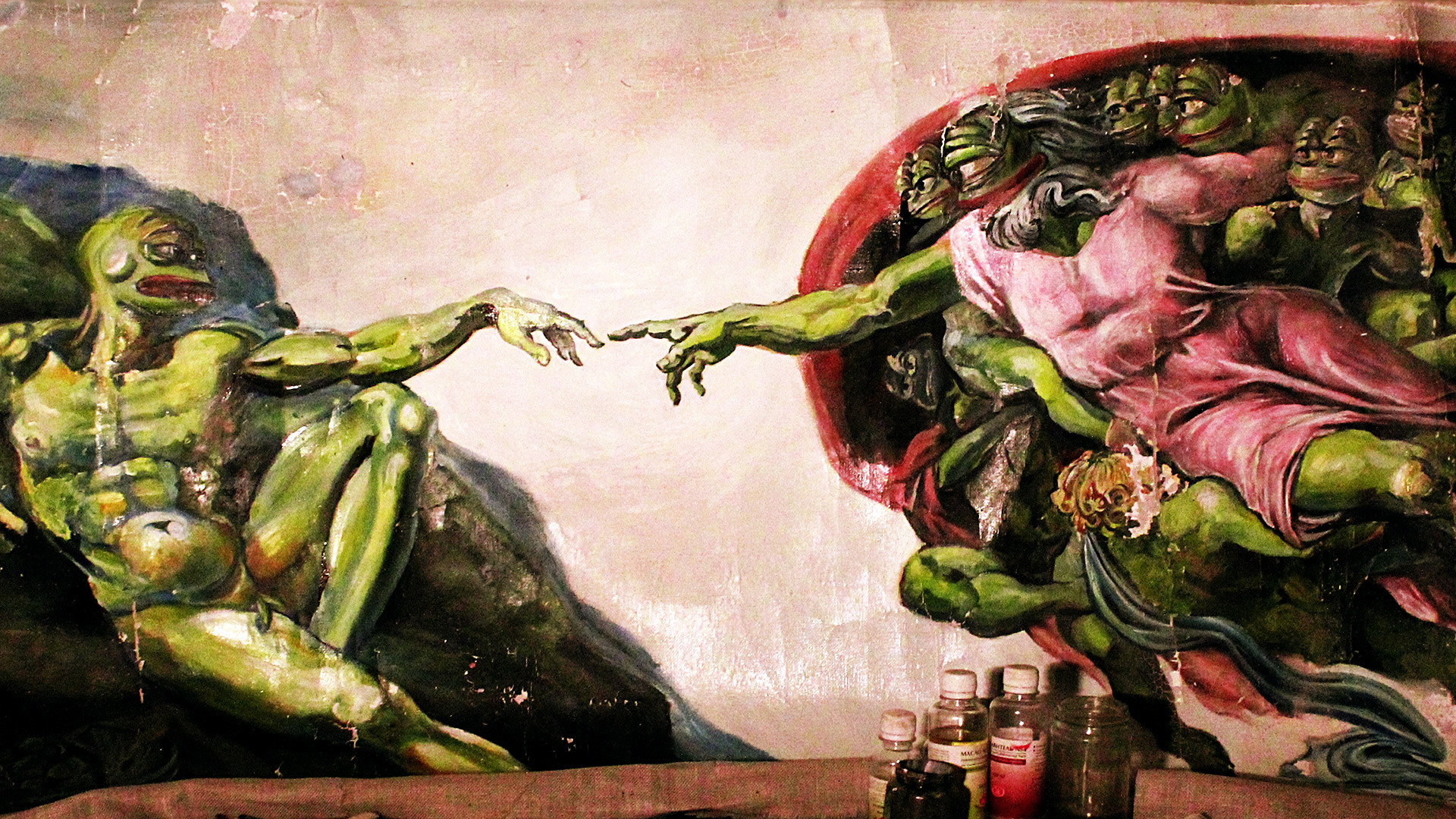 Pepelangelo
While the frog has become a controversial symbol in the U.S. for political reasons, ‘rare Pepe’ artwork is gaining in popularity worldwide, regardless of politics – and young Russian artist Olga Vishnevsky is mastering the art of Pepe – on a whole new level!

Back in 2016, Olga Vishnevsky from St. Petersburg was on the verge of bankruptcy. She was working as an administrator in a wine bar, but after the ruble fell drastically, she was barely making enough and quit. “Suddenly, I had no reason to leave my apartment at all. I was so depressed… so I decided to take up painting, just to take my mind off it all,” Olga recalls.

It ended up being a good decision which helped her a lot – and it all happened by accident. “In order to learn how to paint with oils, one has to do a lot of copying,” she explains. But being an amateur painter, she hated copying so would ‘spice it up’ a bit by replacing humans’ faces with the now iconic face of Pepe the Frog – the meme created in 2005 by American cartoonist Matt Furie. 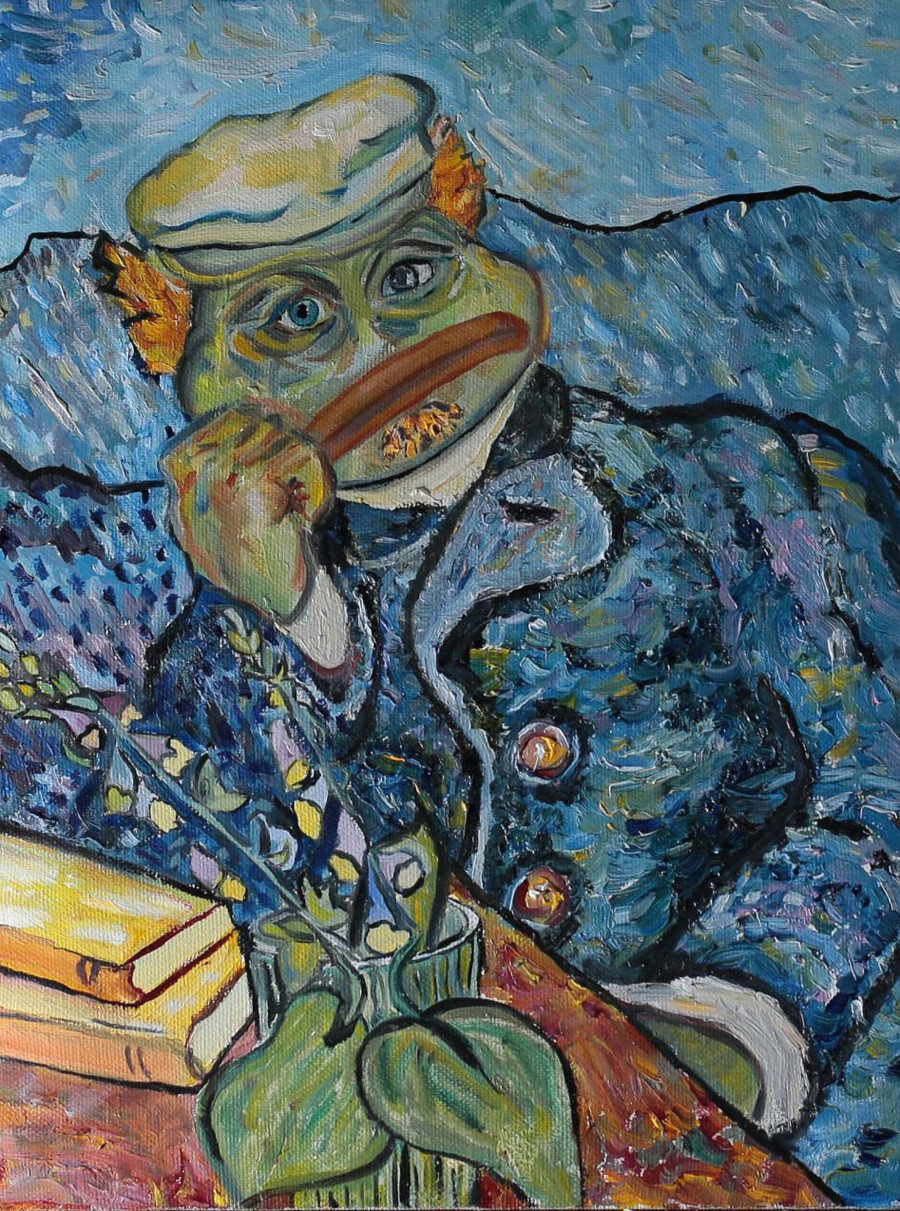 “Human faces are rather hard to paint so a person with minimal experience cannot depict them properly… but frog’s face is easier,” comments Olga. “Besides, Pepe is originally 2D so painting him three-dimensional was good exercise!” 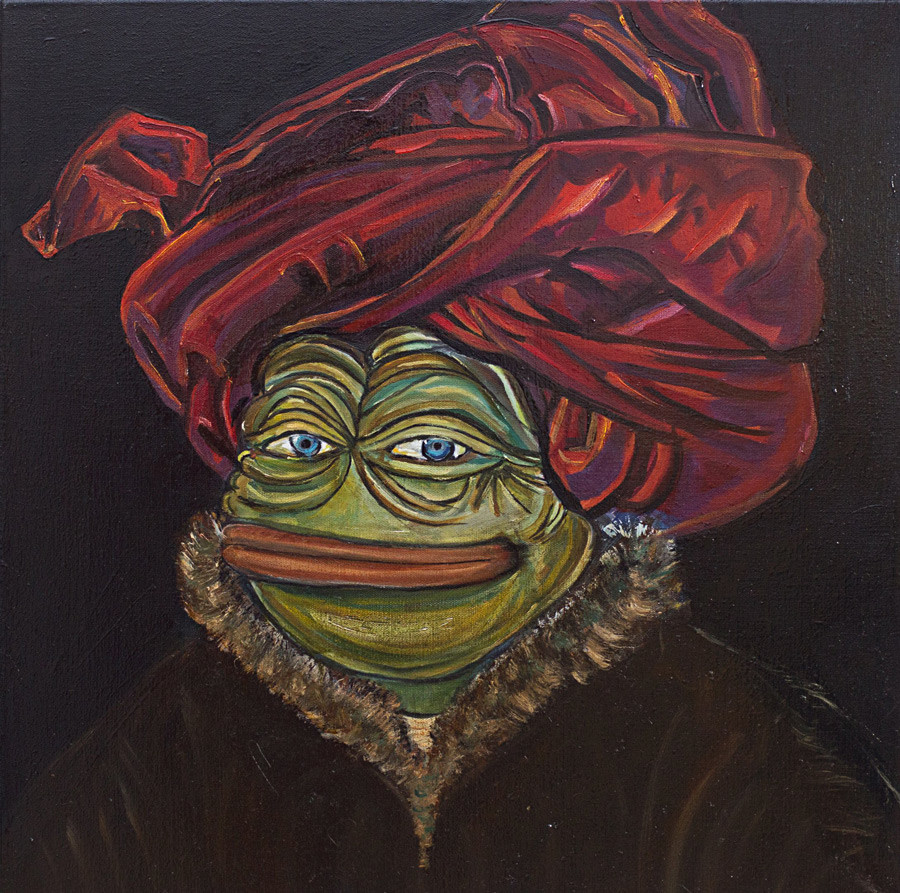 Portrait of Pepe wearing a red turban (based on a portrait by Jan van Eyck).

At first, she didn’t plan to make money off Pepe: “It was just my thing I was doing to cheer myself up a little… maybe giving them as a New Year present to my relatives or selling some to friends of friends, but for a nominal price.” Then all of a sudden, her little Pepe shop on the online marketplace Etsy shot up in popularity. 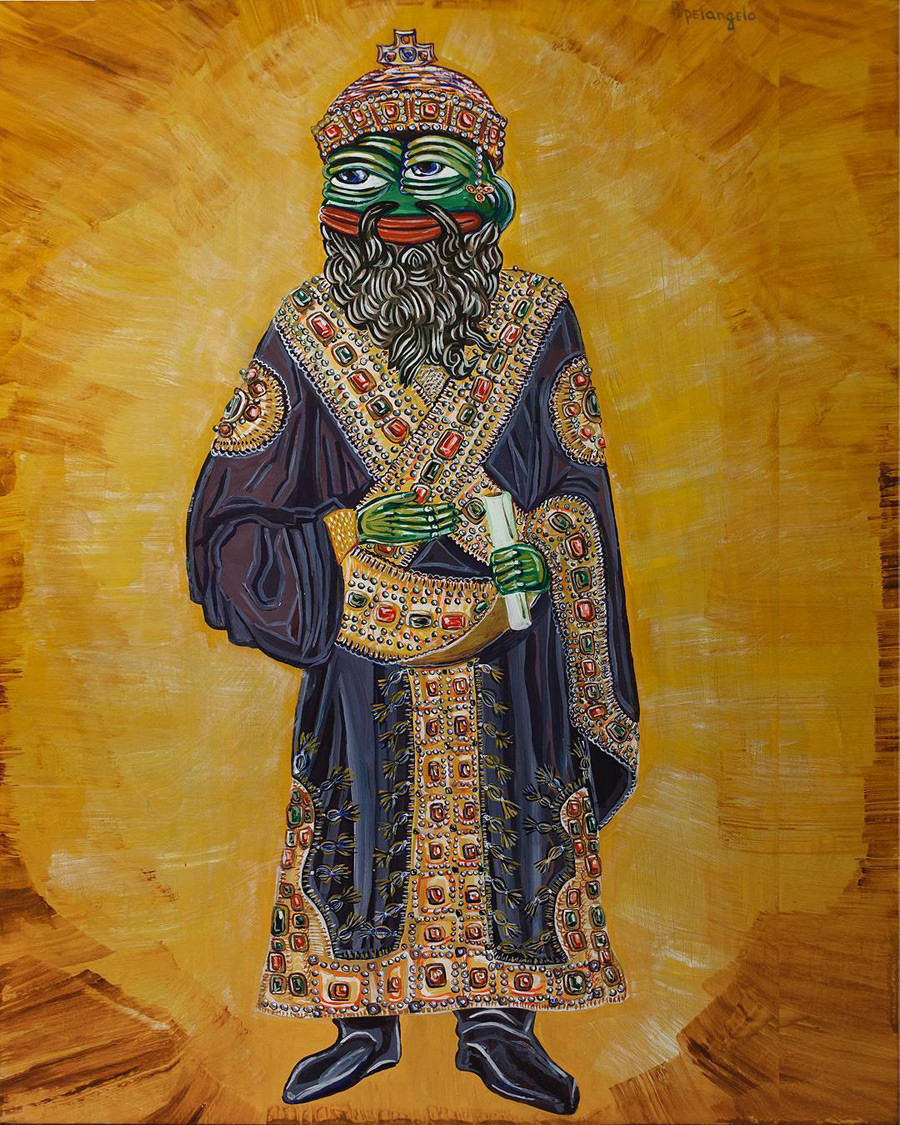 Pepe the Frog caught a lot of the public’s attention in 2016 - and not always in a good way. During the U.S. presidential election campaign, the then-candidate Donald Trump posted a pic of himself stylized as Pepe, after which some from the so-called alt-right movement began posting Pepe along with swastikas… it went as far as the American Anti-Defamation League denouncing certain ‘incarnations’ of Pepe the Frog as a hate symbol. (Not the meme in general, though).

Olga doesn’t see Pepe as a symbol of hate – like tens of thousands of other people around the world who adore the frog and collect rare Pepes. “I had no idea about Matt Furie, Donald Trump, the alt-right and so on… I just loved collecting pictures with a sad Pepe the Frog in different situations,” she told Bored Panda. 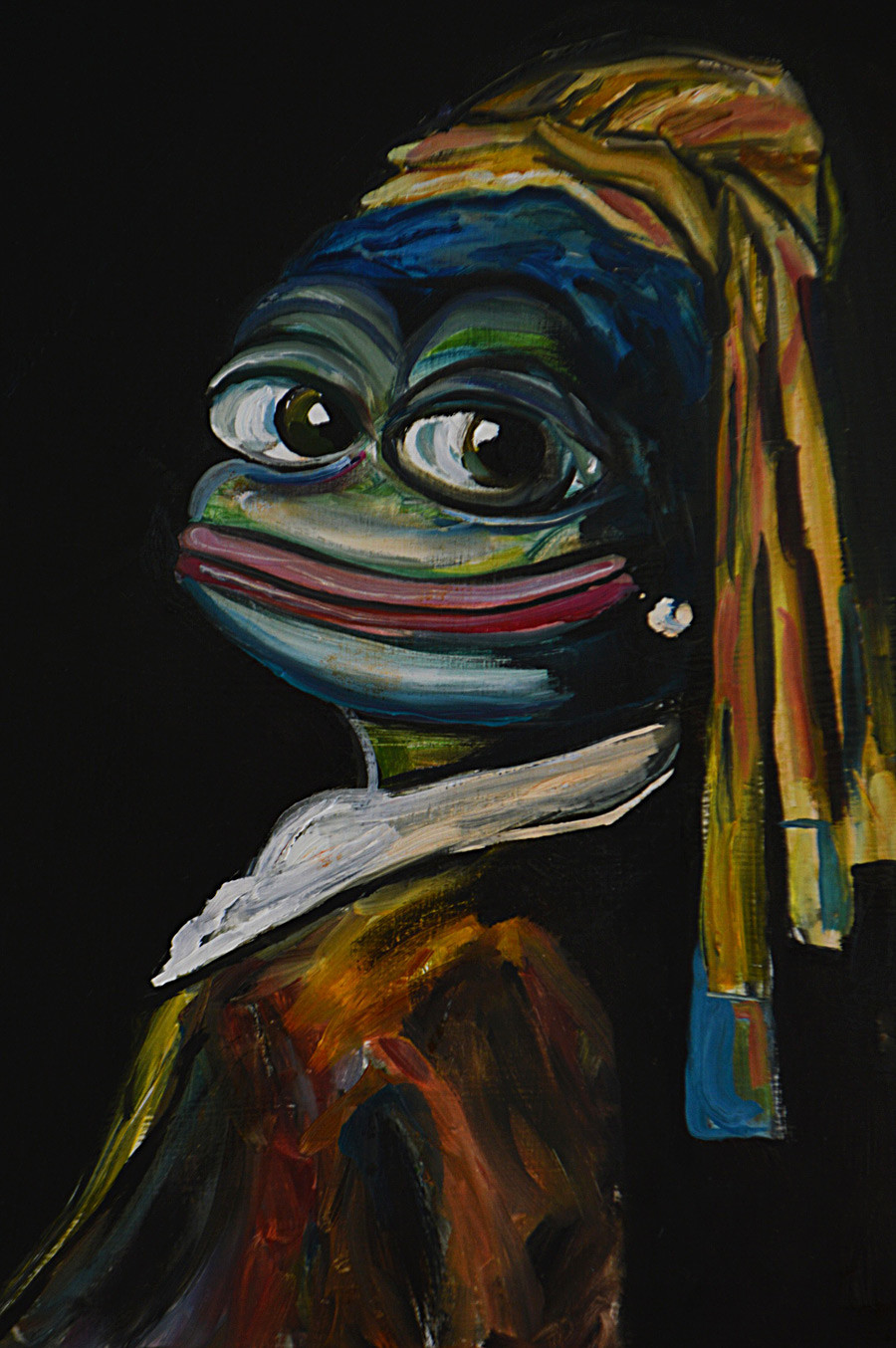 Nevertheless, it was after Donald Trump was elected that Olga’s paintings became extremely popular. “By that time, I had five finished works – someone found them on Etsy, posted them on Reddit after which about 3,000 people visited my page and bought everything! At first, I thought it was some kind of a mistake, so I double-checked. That’s how I got my first orders and audience I still work with,” she comments. 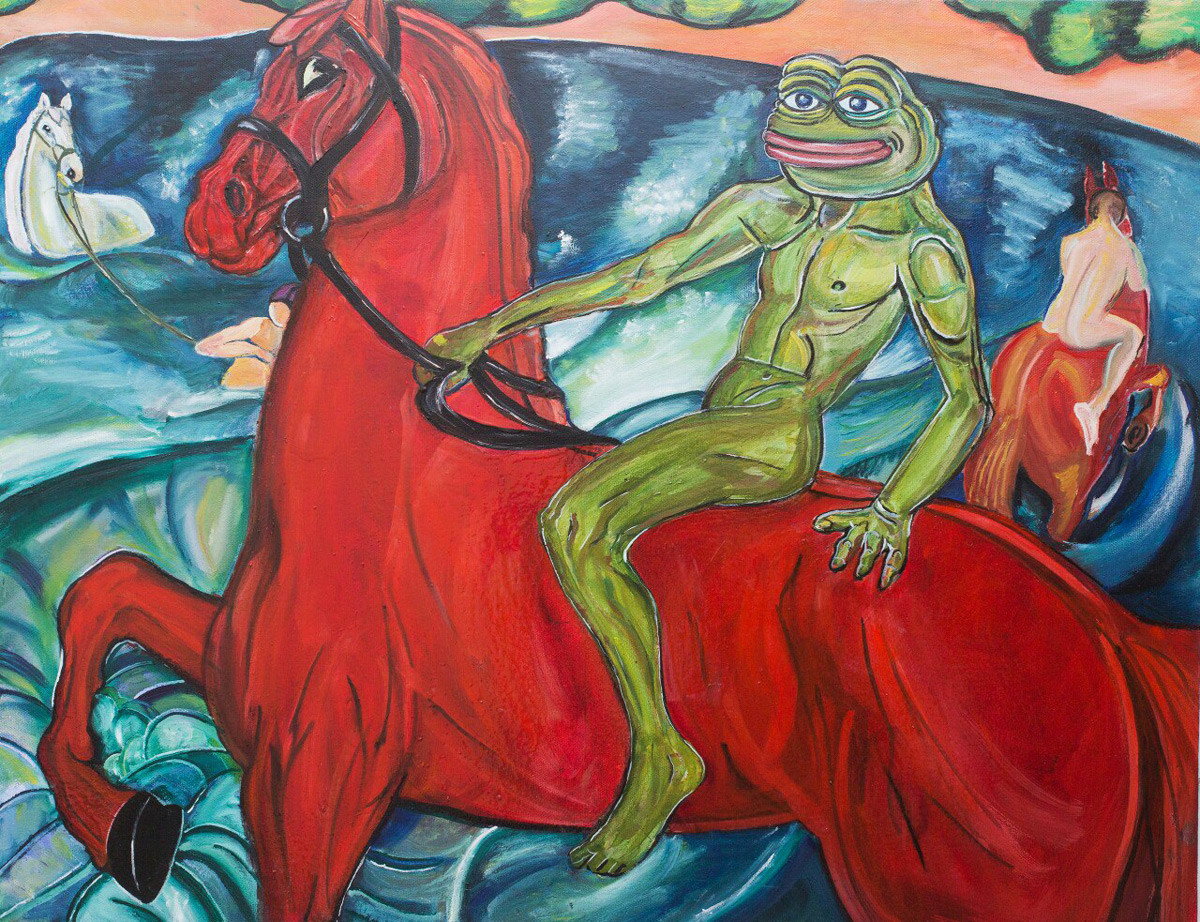 One can actually learn the history of art from her paintings. There’s Vincent Van Gogh and Francisco Goya, Kuzma Petrov-Vodkin and Jackson Pollock – all totally Pepe-fied! He’s appeared as the Emperor of Byzantium and as Vlad the Impaler. And even Neo! 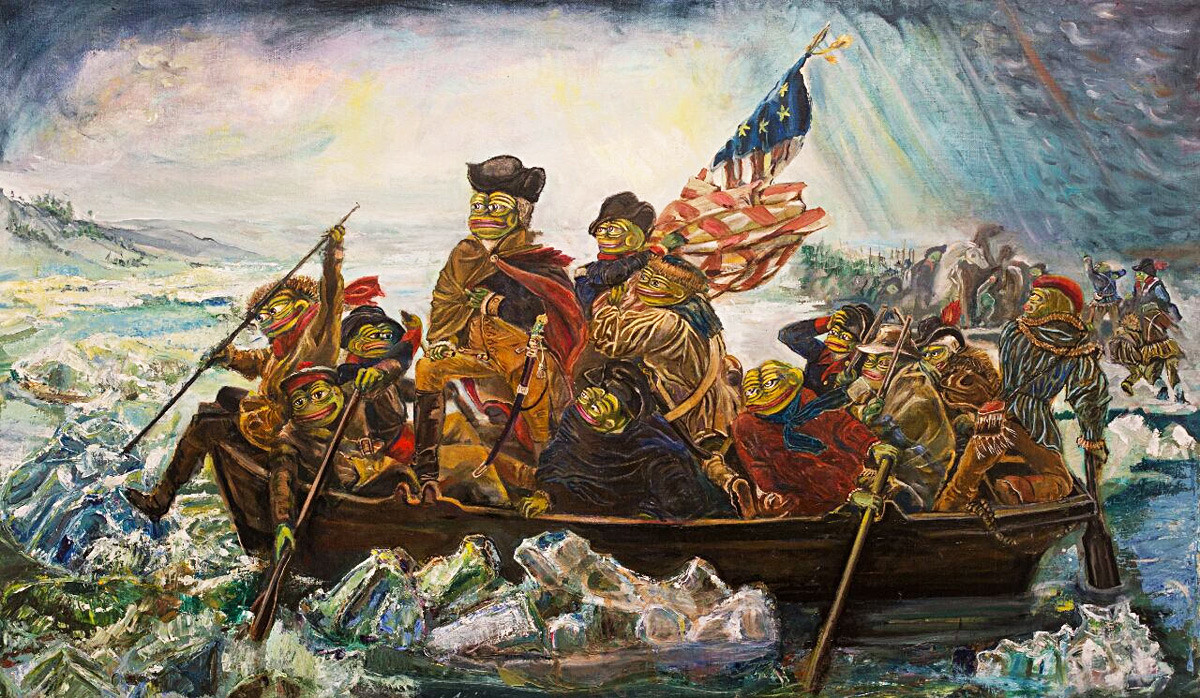 Though ‘Pepelangelo’ (that’s how Olga named her page dedicated to Pepe-based art) is hilarious, painting them is actually hard work, especially the larger pieces. “To me, the hardest one to make was Pepe Crossing the Delaware (originally Washington Crossing the Delaware by Emanuel Leutze). It was my first big work and really complicated with all the characters…” Olga remembers. “After that I feared nothing – even The Last Supper, which is my biggest by now, 110 to 220 centimeters!” 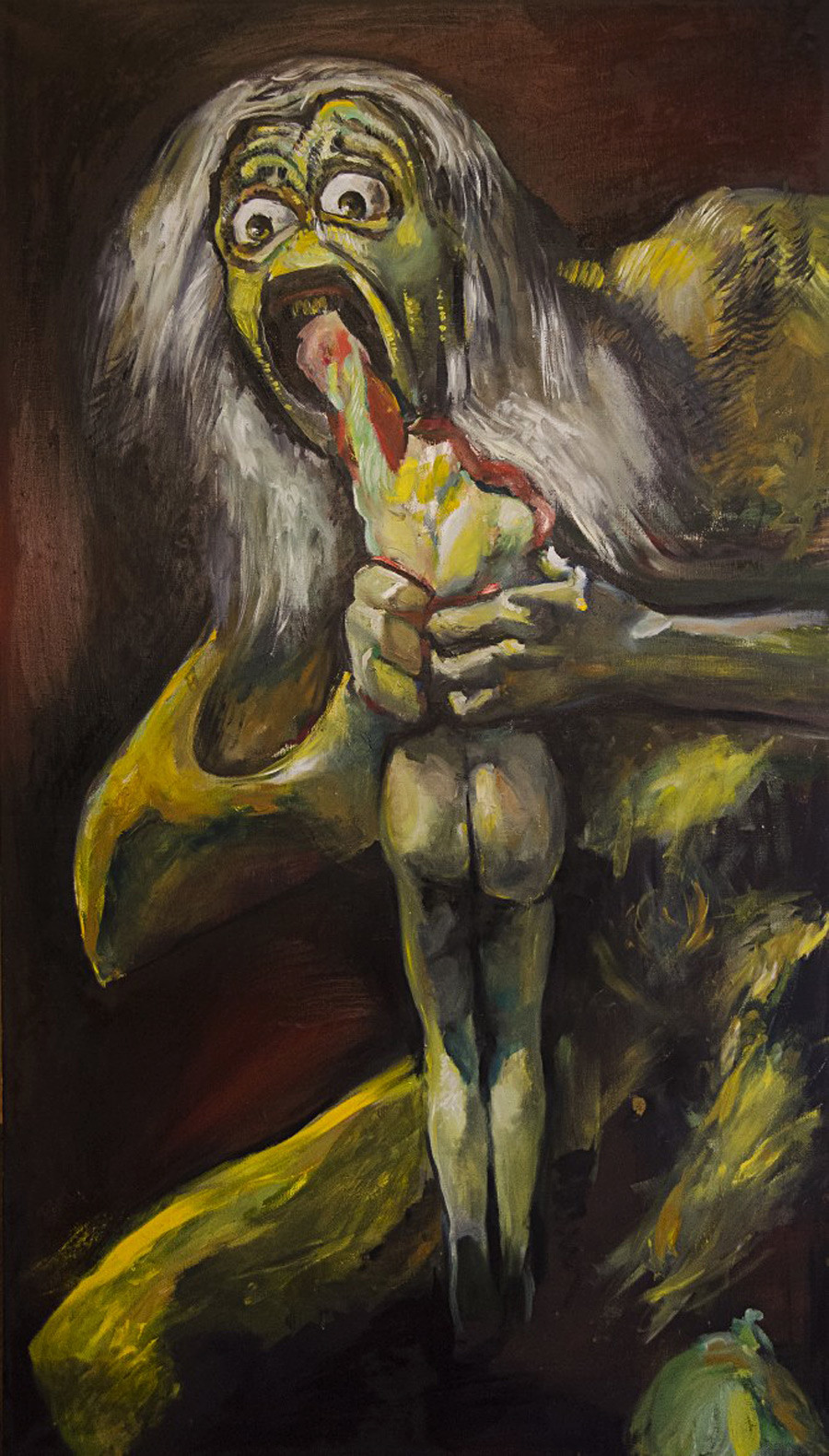 Dining Pepe (based on Saturn Devouring His Son by Francisco Goya). 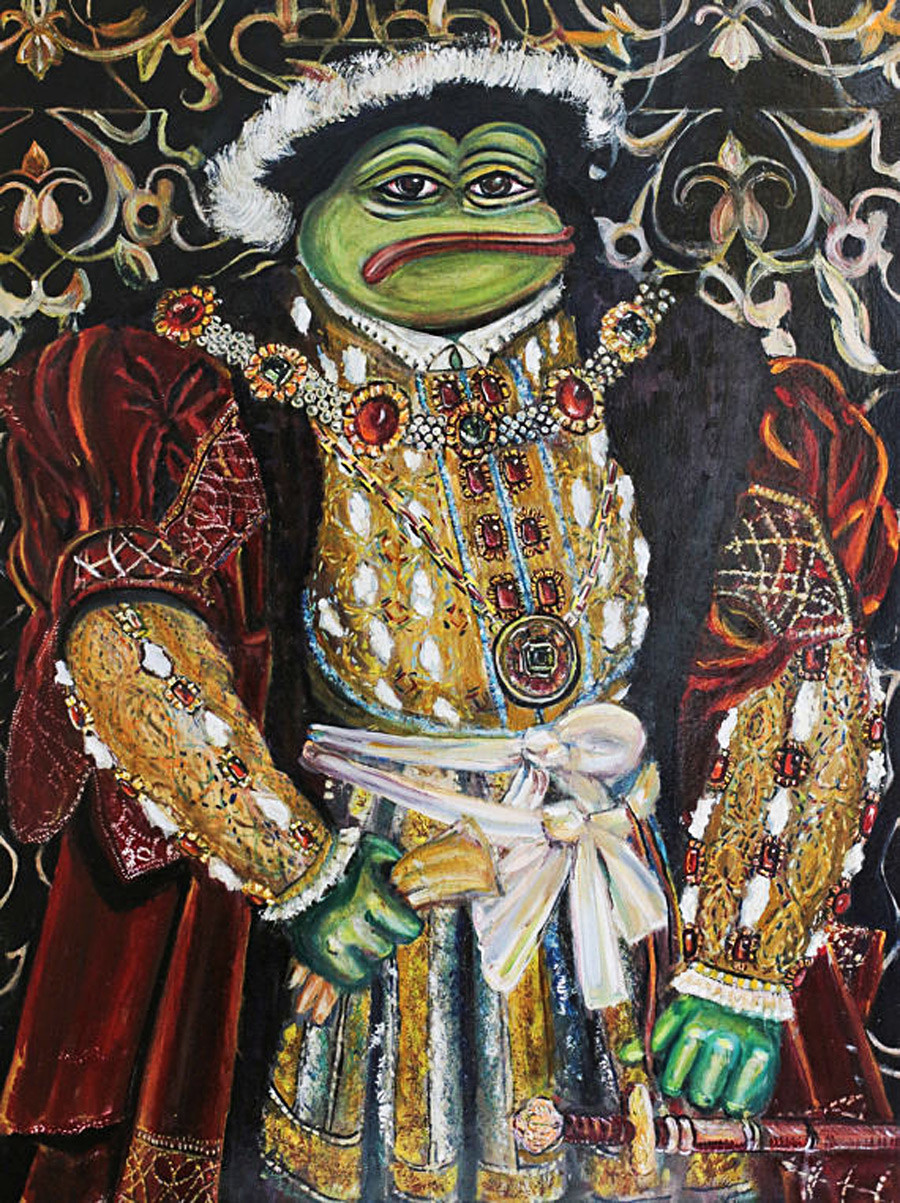 Pepe Henry VIII (based on the portrait of Henry VIII by Hans Holbein).

"This is what I do for a living now,” says Olga. “But it doesn’t mean I have a nice life: painting is really messy and now all my life revolves around it. I constantly have to wear dirty clothes, my hands are always dirty, I have to rent an apartment which I can stain with paint, and so on!” 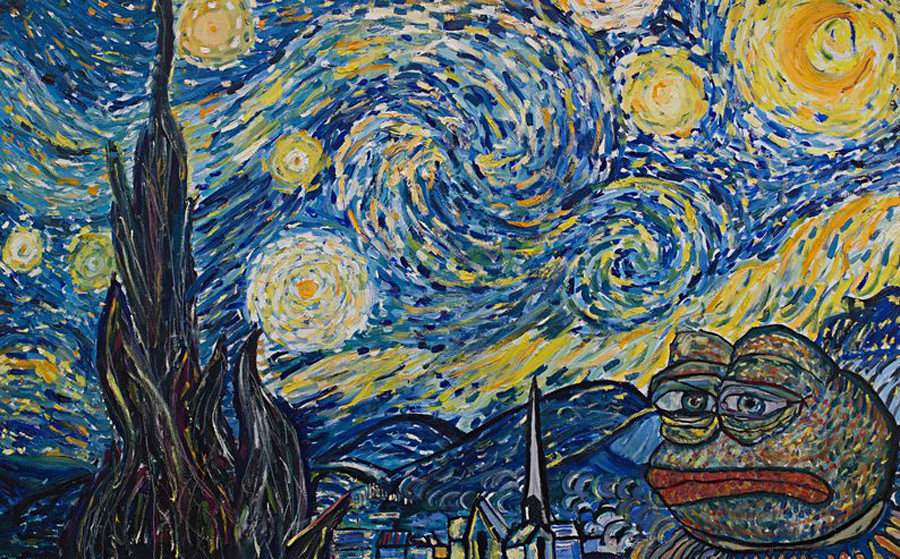 In any case, Pepelangelo seems to thrive. Olga’s even hired some assistants to help her deal with logistics like buying canvases, oil and other materials, shipping ordered works and so on. 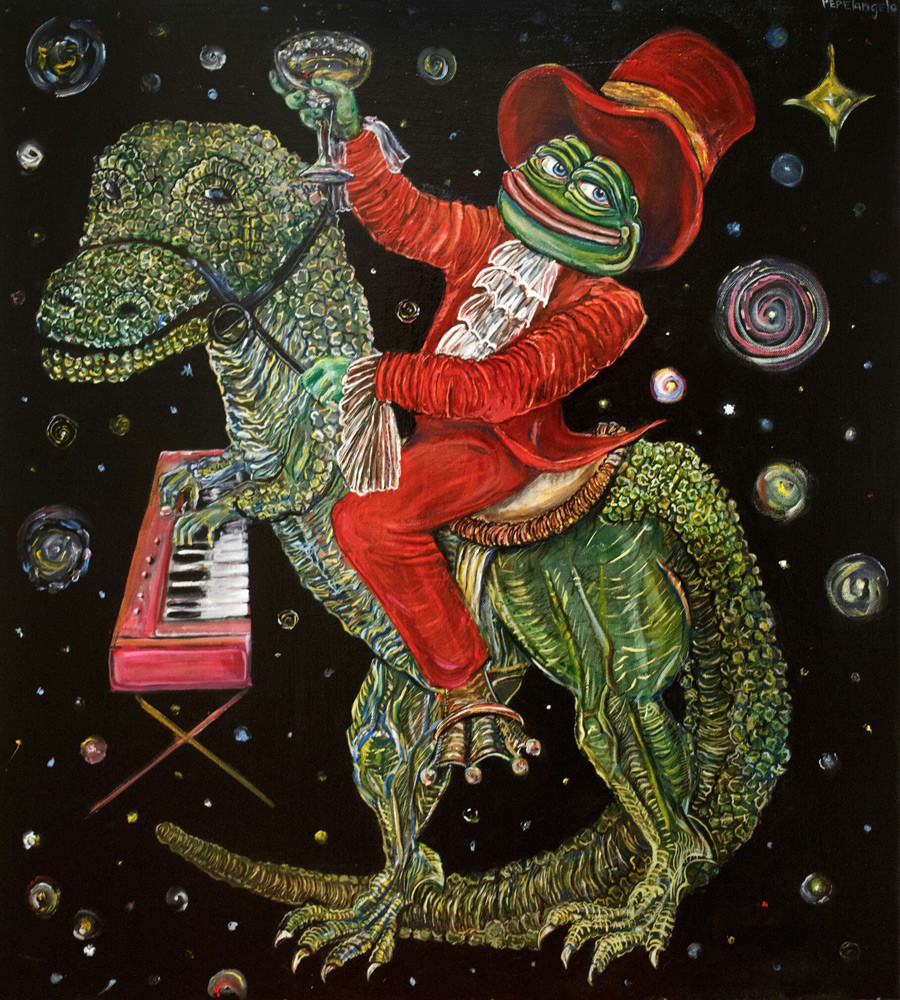 Pepalangelo has more than 7,000 subscribers now; many of them are schoolchildren. “From time to time they write to me: ‘Hi, I want to use your painting’s photo in my school presentation’, and I always say ‘yes’,” Olga says. Once a kid’s mother even ordered a Pepe painting as a birthday gift for her son.

“Most of these kids are American, of course. Sometimes I ‘follow’ them back (on Instagram), as they have many cool posts, funny jokes and so on!” People from the U.S., Canada, Australia, Germany, Eastern Europe and many other places around the world have already ordered Pepelangelo paintings (although Olga admits she hasn’t had any orders from Asia yet). Some people even send her their own ‘rare Pepes’: drawings, wooden sculptures and so on. 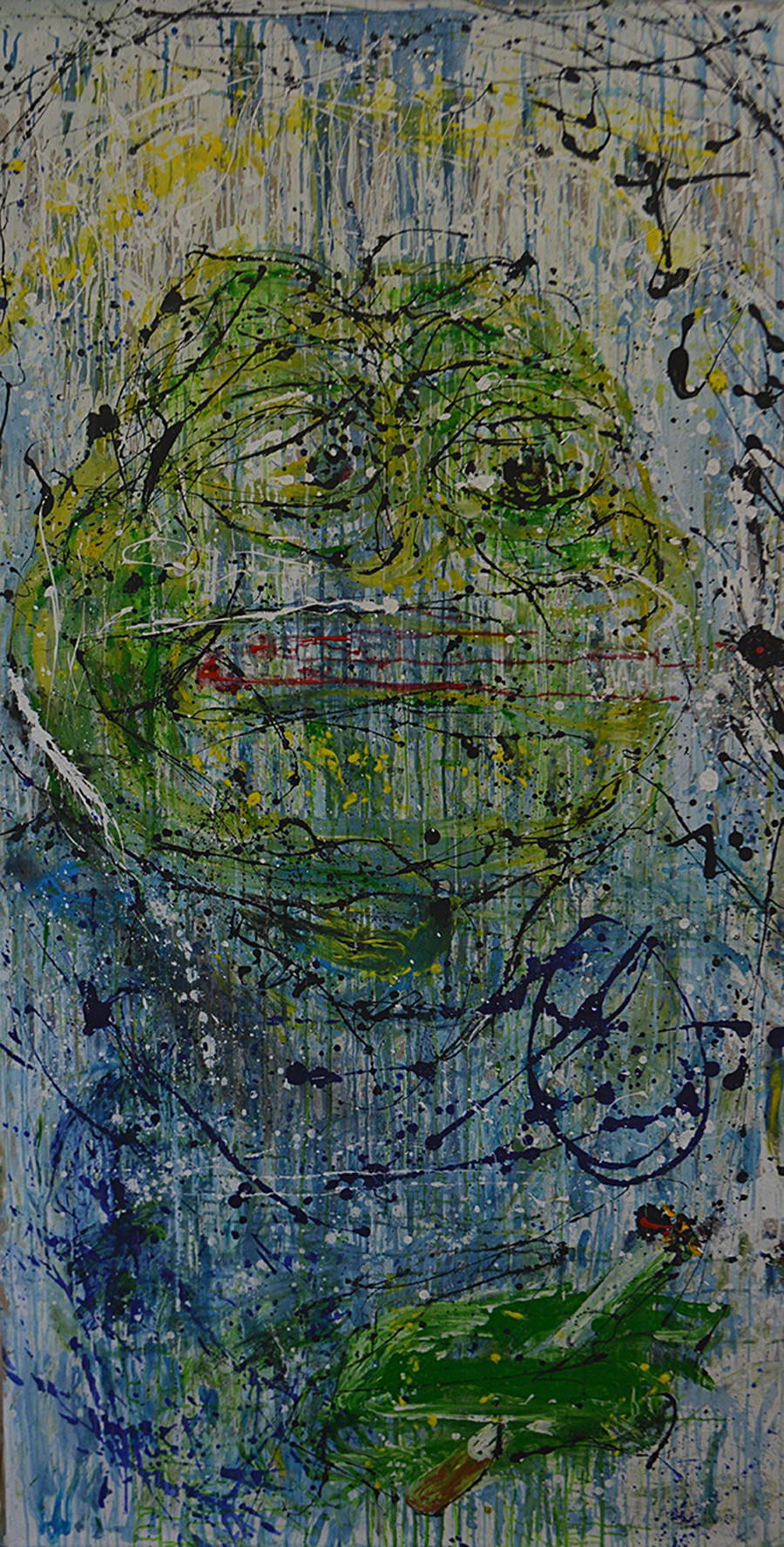 Pepe Pollock (based on several works by Jackson Pollock).

In addition to that, Olga plans to make a big exhibition for Pepelangelo, which will include not only paintings but also sculptures as well. “There’s a whole adventure-story concept behind it: like there really was the religious cult called ‘Cult of Kek’ (a humorous urban legendclaims Pepe is an avatar of the ancient Egyptian frog-headed deity Kek] and we visited a museum exhibition which told us all about that cult,” she explains. 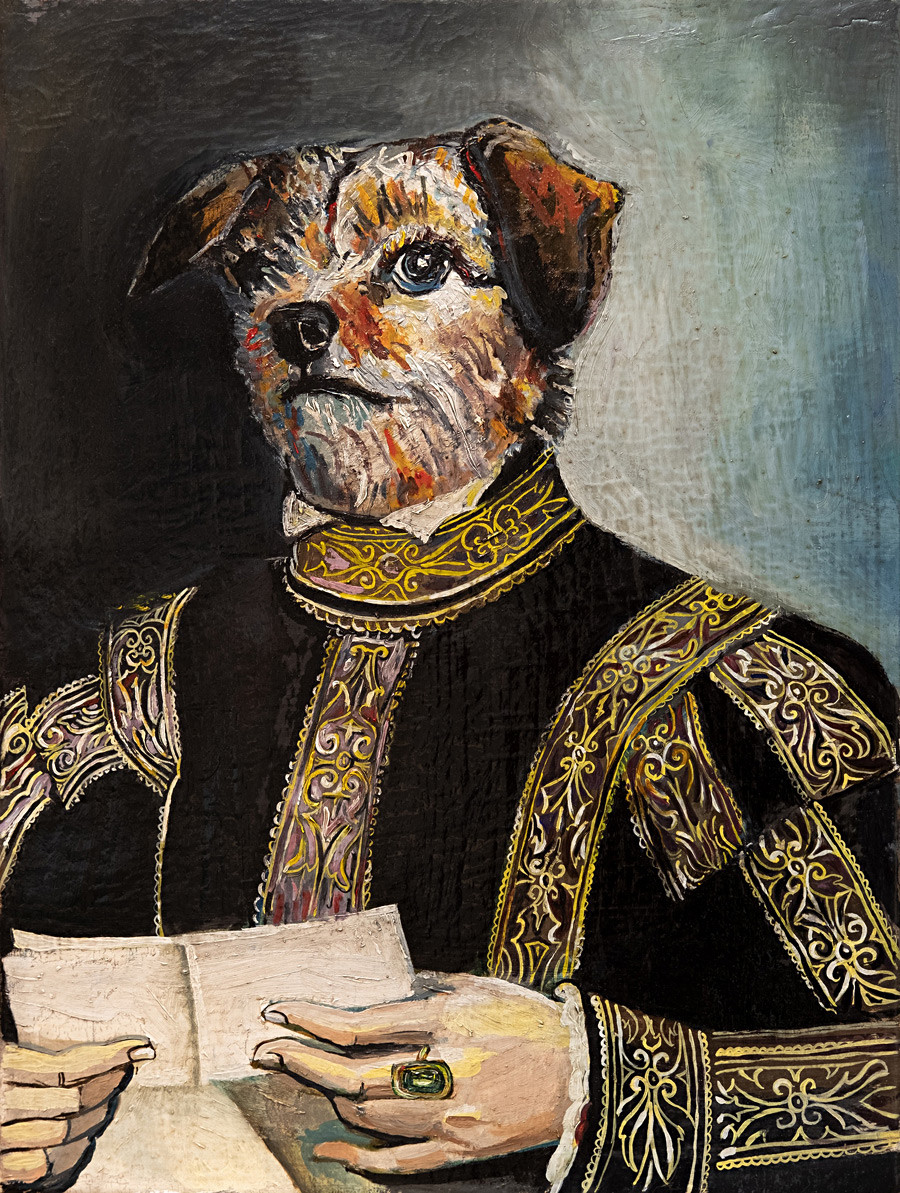 The Portrait of Human Doggo. Yes, Olga paints not only Pepes!

Sometimes, to distract herself from Pepe, Olga paints dogs and other things. “Of course, I want to develop further – painting frogs is not enough to become a respected artist, I know. But these things take time – you need to enroll some art university, probably. I’m thinking about it but for now I’m painting frogs, and I love them! I’m happy that they help me and I help them in return!”

Every month or so someone comments on her Instagram account saying, “It’s all hype! In half a year from now you’ll have no orders, Pepe isn’t popular anymore!”

“Well, I don’t think so,” Olga says. “Everyone adores Pepe and no one really knows what’s his secret… everyone who wants to can be associated with him and everyone can redraw him in their own style. I think it’s great.”