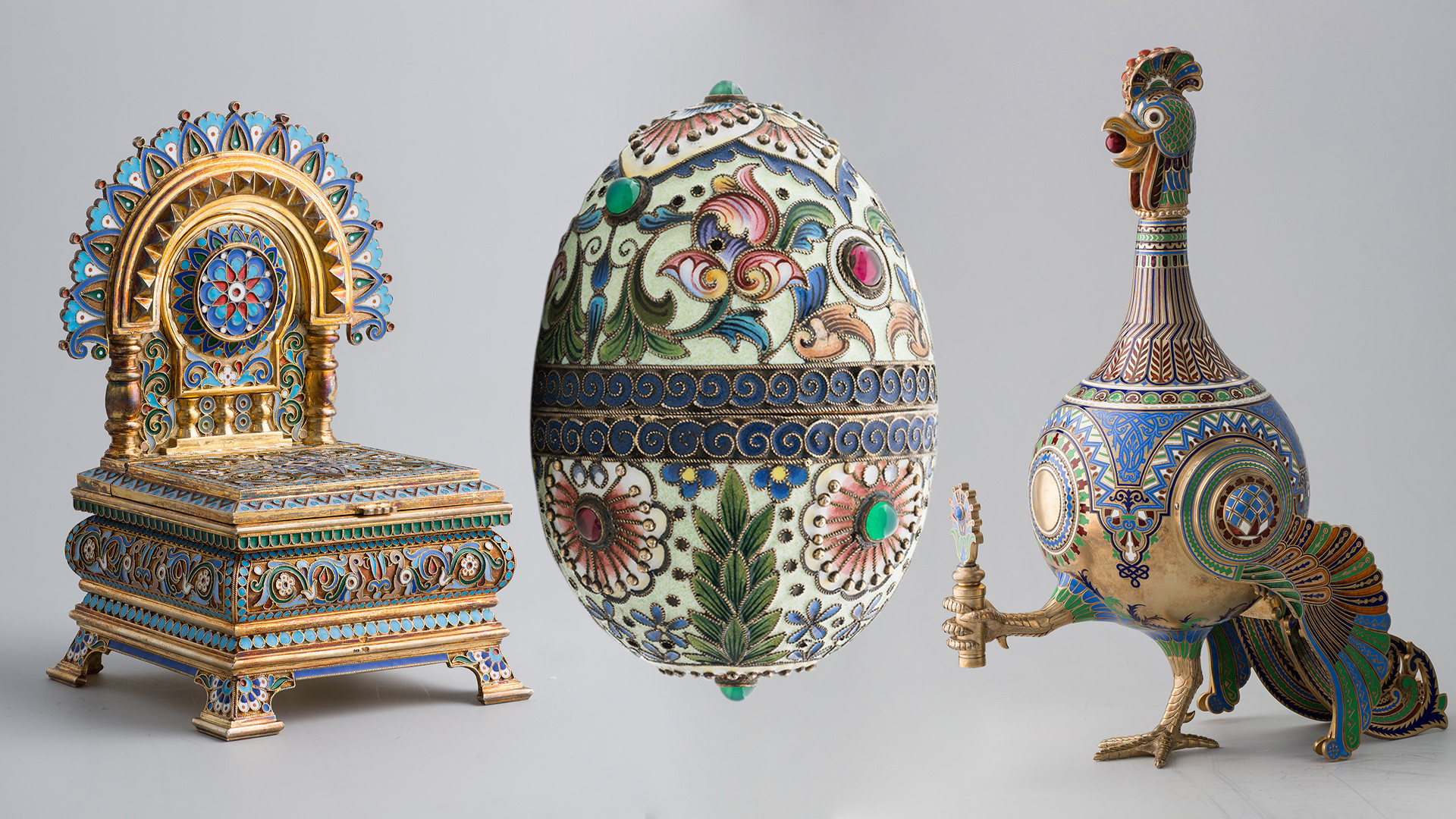 Press photo
Legendary workshop of the court jeweler, Carl Faberge, didn’t just create magnificent Easter eggs. And the House of Faberge was far from the only jewelers firm that served the Romanovs. Here are just a few of their exquisite items, from the collection of the Historical Museum in Moscow. 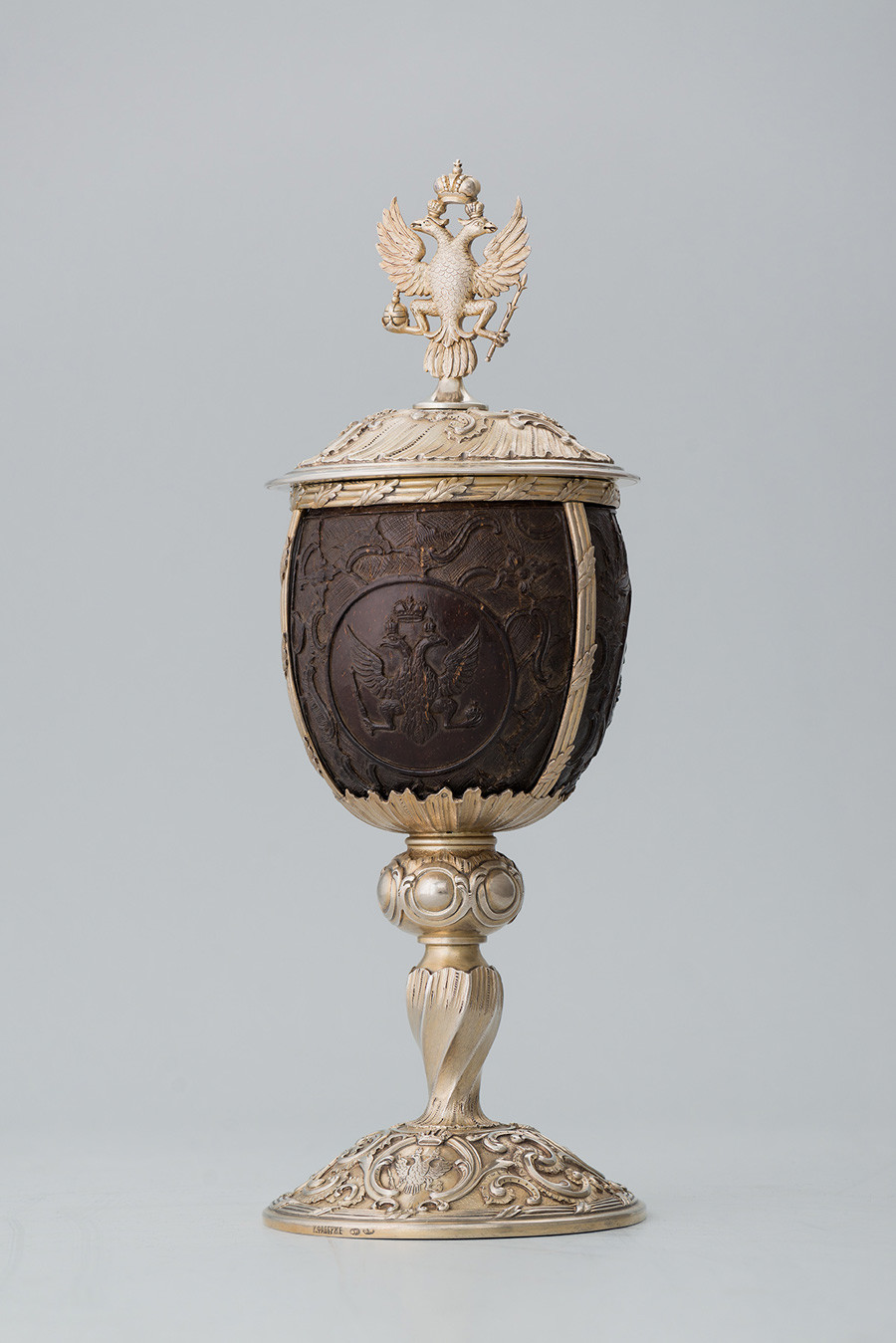 The goblet is decorated with several double-headed eagles - symbols of the Russian Empire since the 15th century. It was made by Stephan Wakeva of the Faberge workshop. 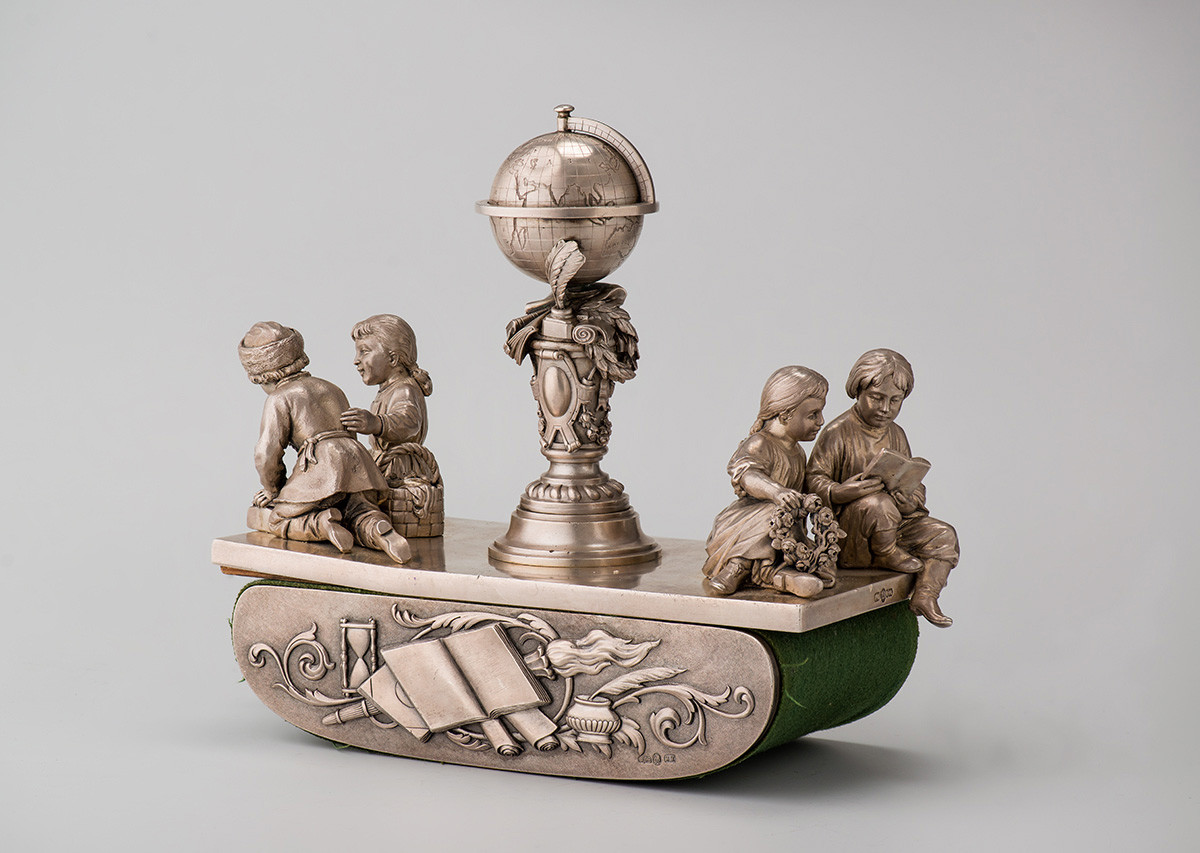 Ivan Khlebnikov came from a family of jewelers and in the 1870s, after 40 years of trading in silver and gold items, he opened a factory in Moscow. It employed several hundred craftsmen and, in addition to stationery for the imperial court, manufactured cutlery, items for the empress’s wardrobe and details of decor for the Winter Palace. 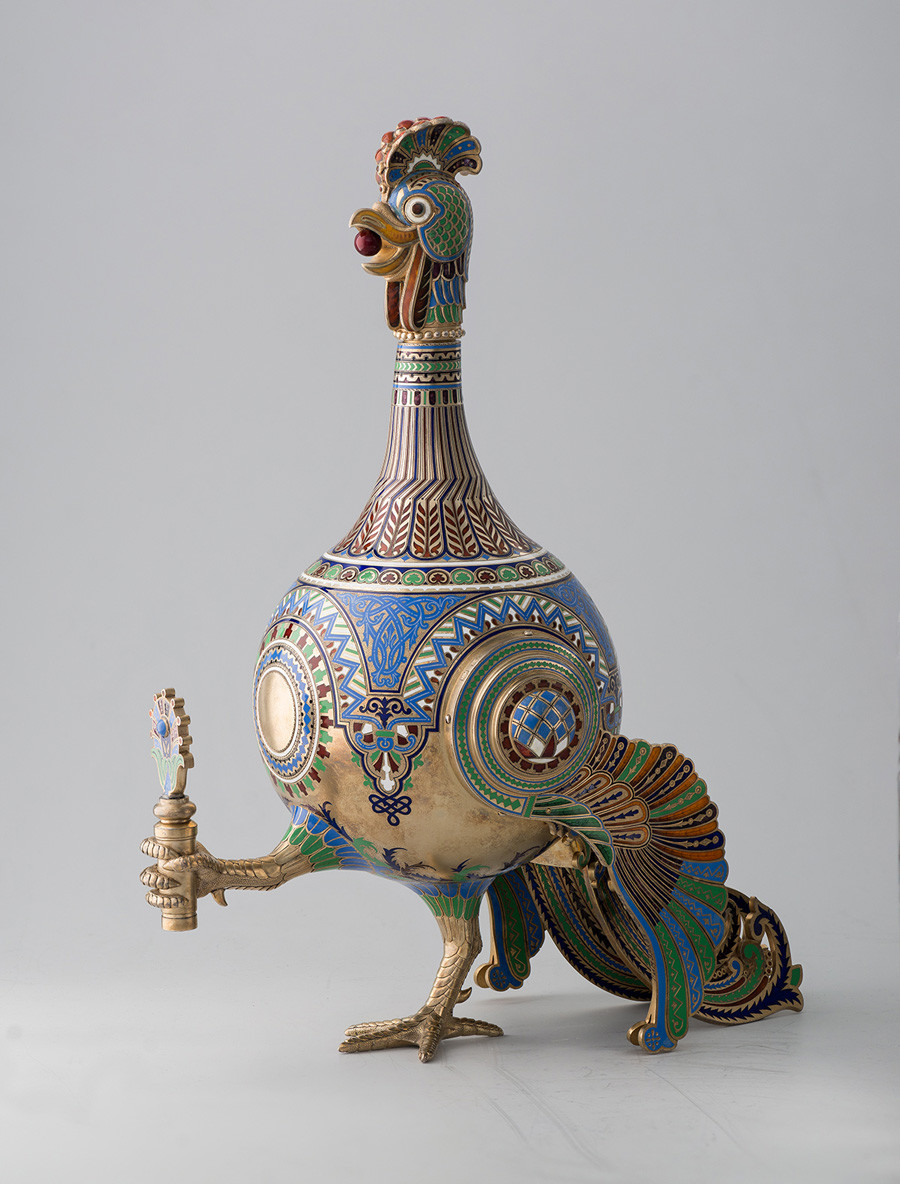 From the late 19th century, the imperial family adopted a fashion for the traditional Russian (or, as they called it, Neo-Russian) style. That is why jewelry masters started to use colorful paintings, carved ornaments, kokoshniks (a traditional Russian headdress for women) and cockerels in their creations.

4. Salt shaker. The House of Fabergé 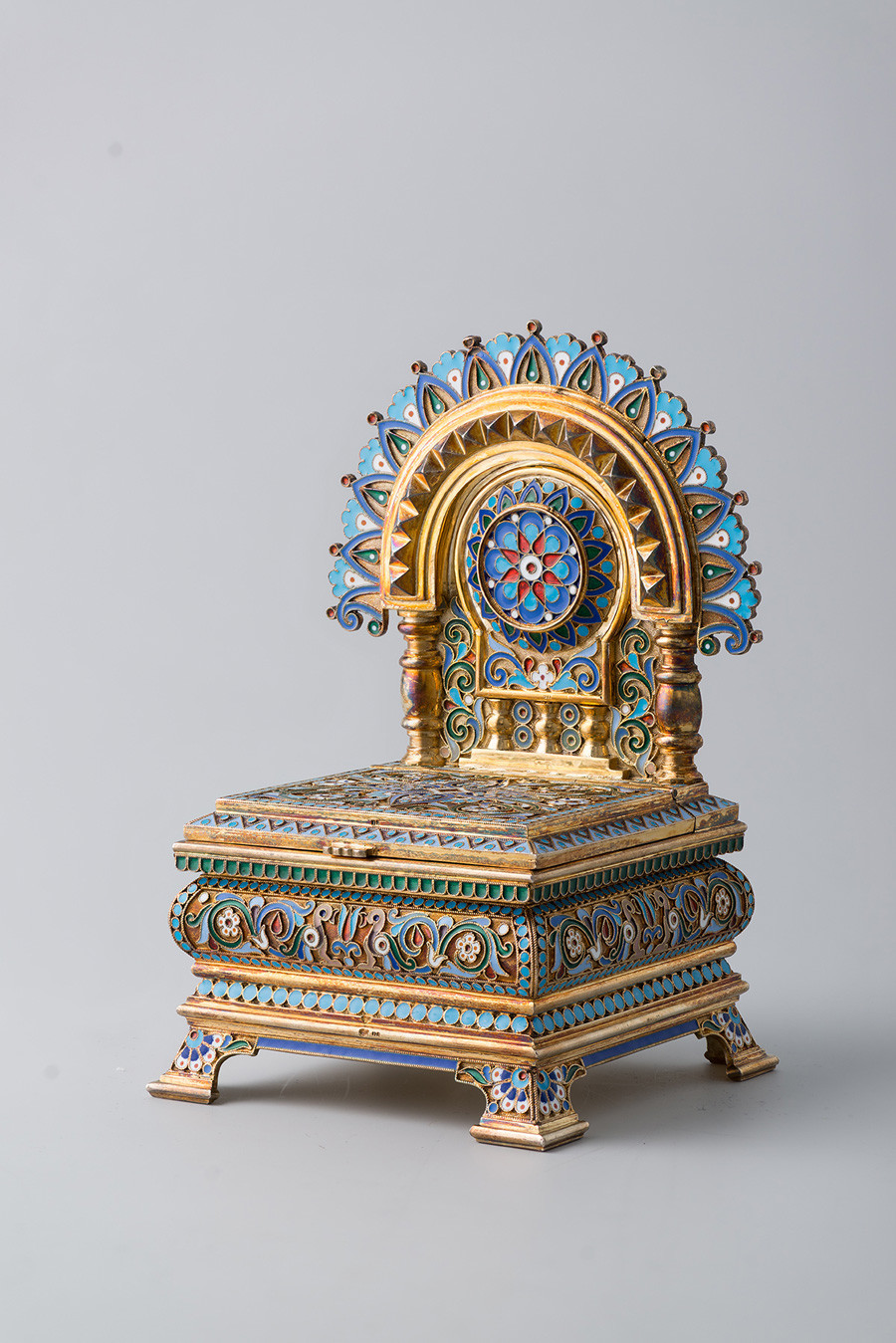 Jeweler Pavel Ovchinnikov's life story is an example of a truly brilliant career. Born a serf, he became a jewelry master's best apprentice and bought his freedom with money from the sale of the items he made. He then became a purveyor to the imperial court and, for more than 40 years, his company manufactured items for the grand dukes - and even the tsar himself. 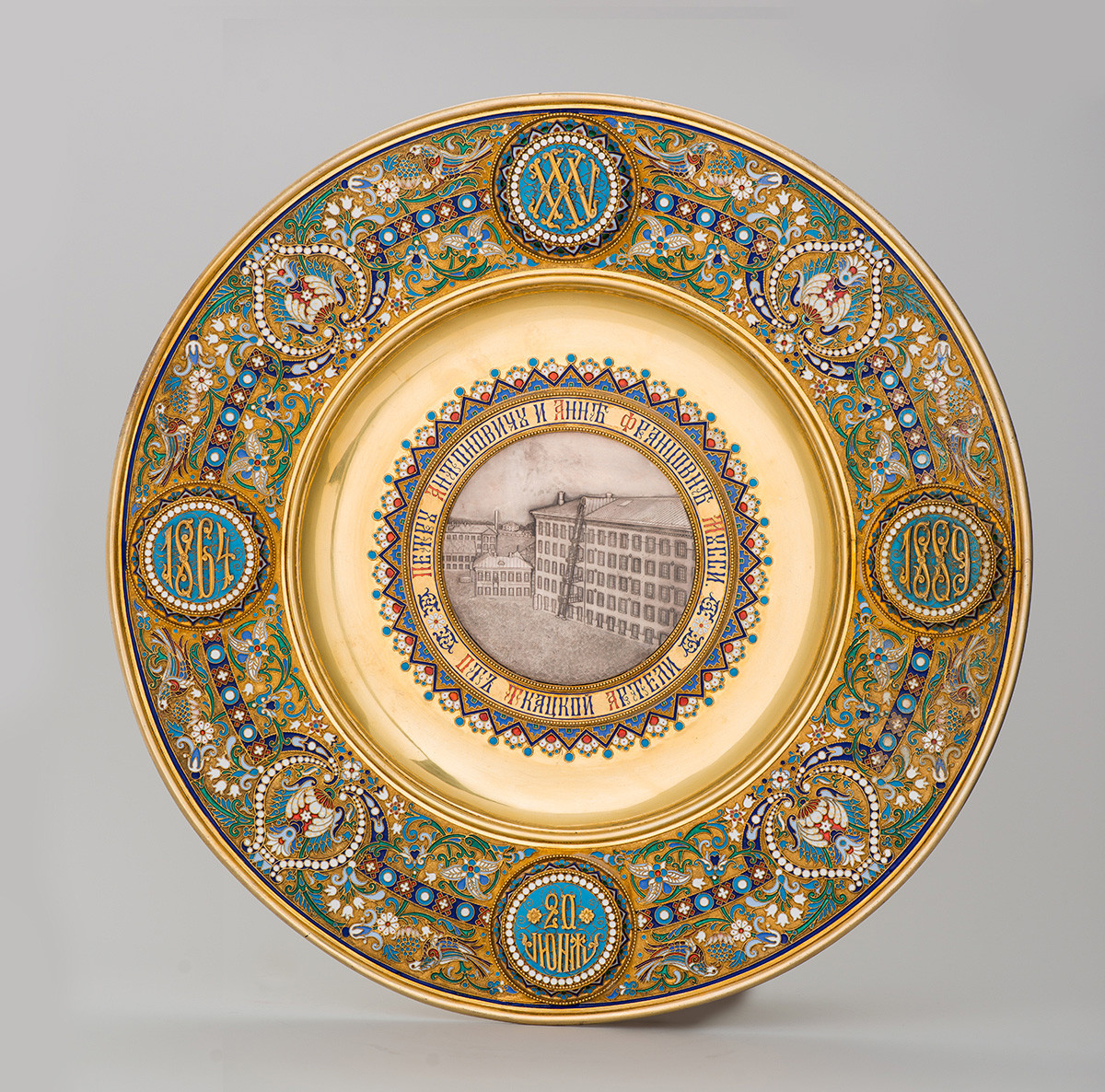 In the center of the dish the building of a silk factory in Moscow is depicted and around it an inscription that reads: “TO PYOTR ANTONOVICH AND ANNA FRANTSOVNA MUSSI FROM THE WEAVERS' GUILD”. Mussi was a merchant and the founder of this factory, one of the most successful in the Empire, which employed tens of thousands of people. One can imagine the regard he was held in by his employees that they even commissioned such a dish for him. 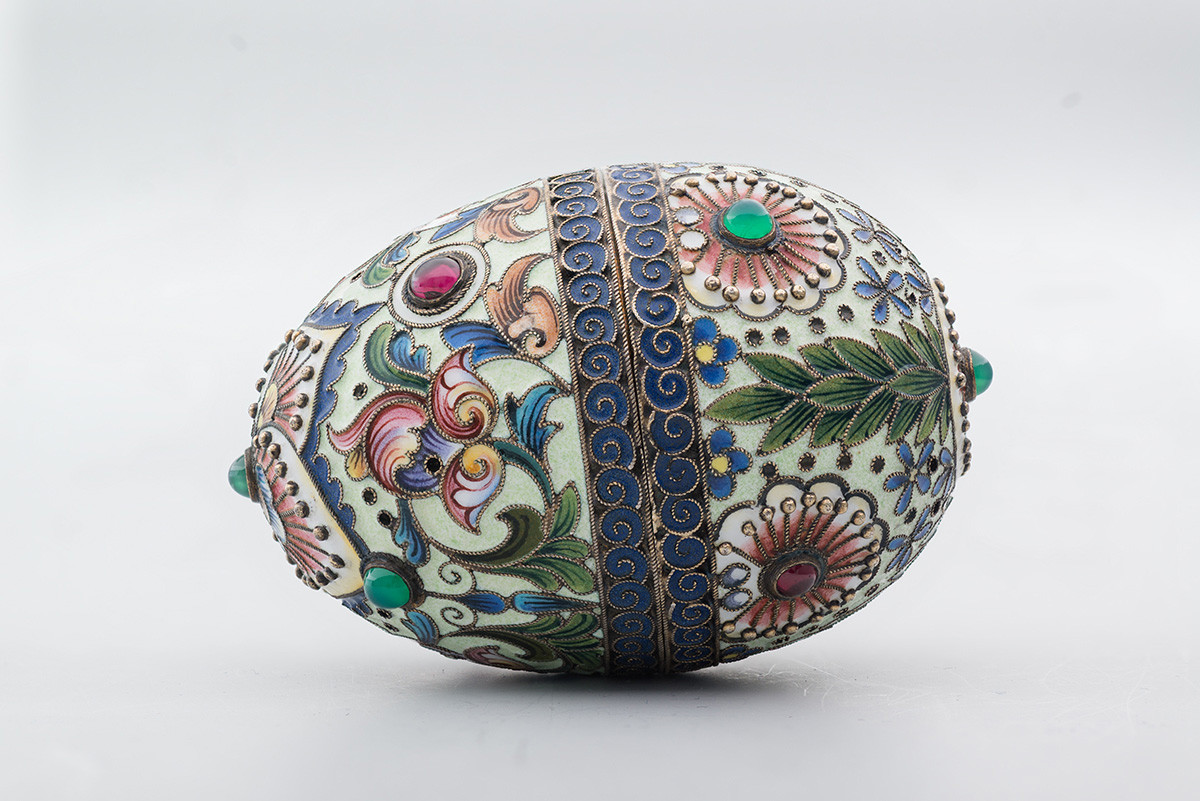 German-born jeweler Feodor Rückert was particularly famous for his enamels in the Neo-Russian style. In the late 1880s, he signed a contract with Faberge and started producing items for the court and gifts for diplomats. 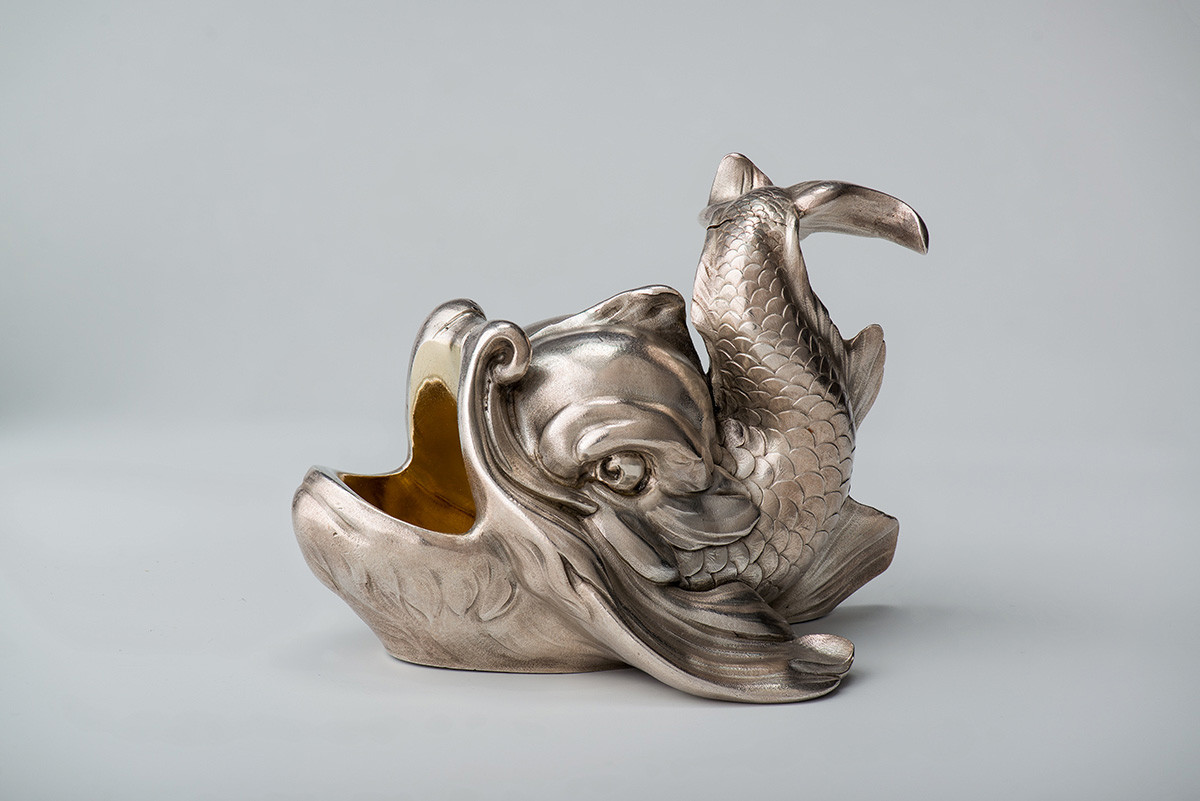 An embossed ashtray like this one was used by the grand dukes. This small, 6x8 cm, item weighs more than 600 grams. 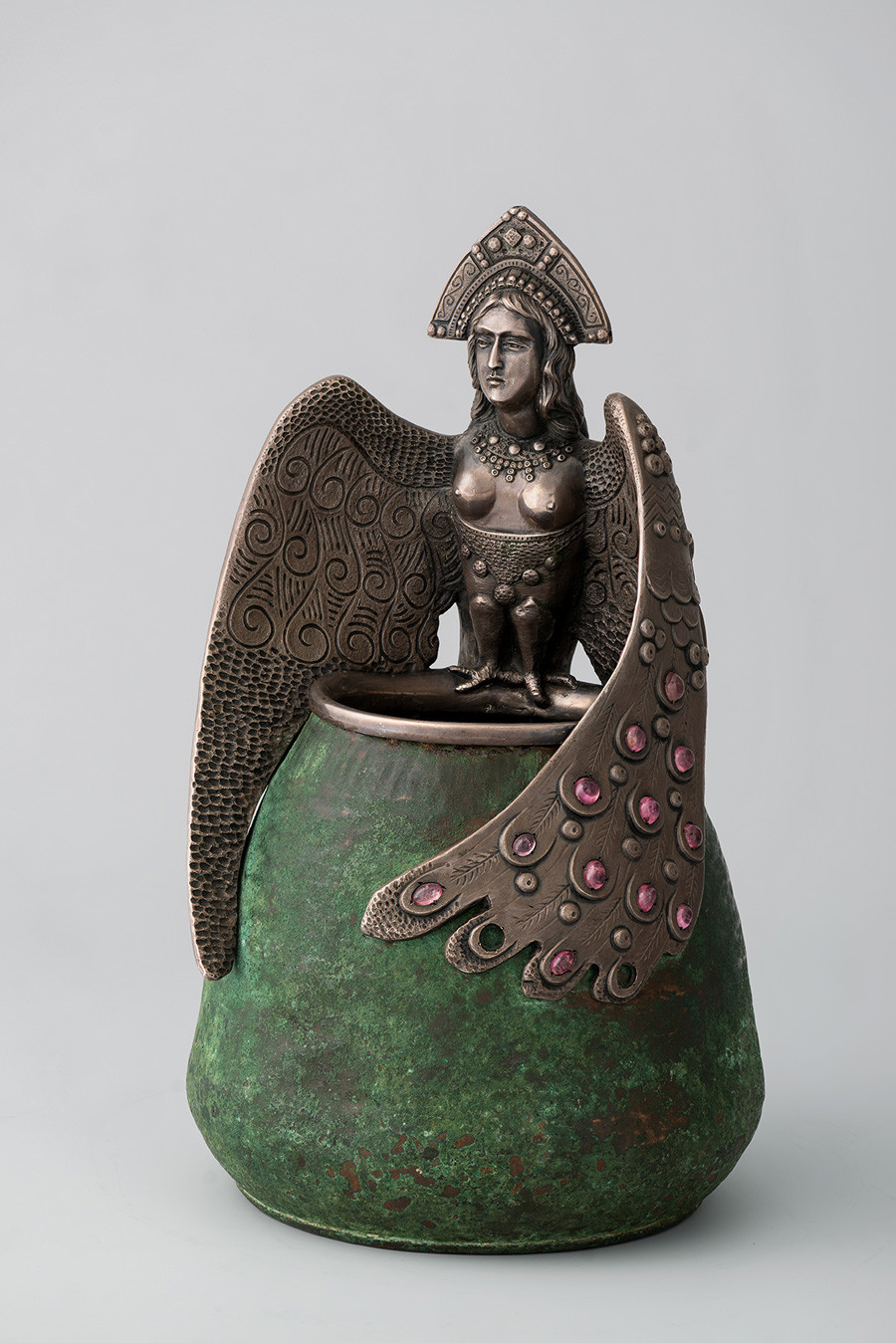 This malachite masterpiece was made right before the revolution and was one of the last works to come out of Faberge's factory in Russia. In 1918, the Bolsheviks nationalized his enterprise, and he was forced to leave the country. 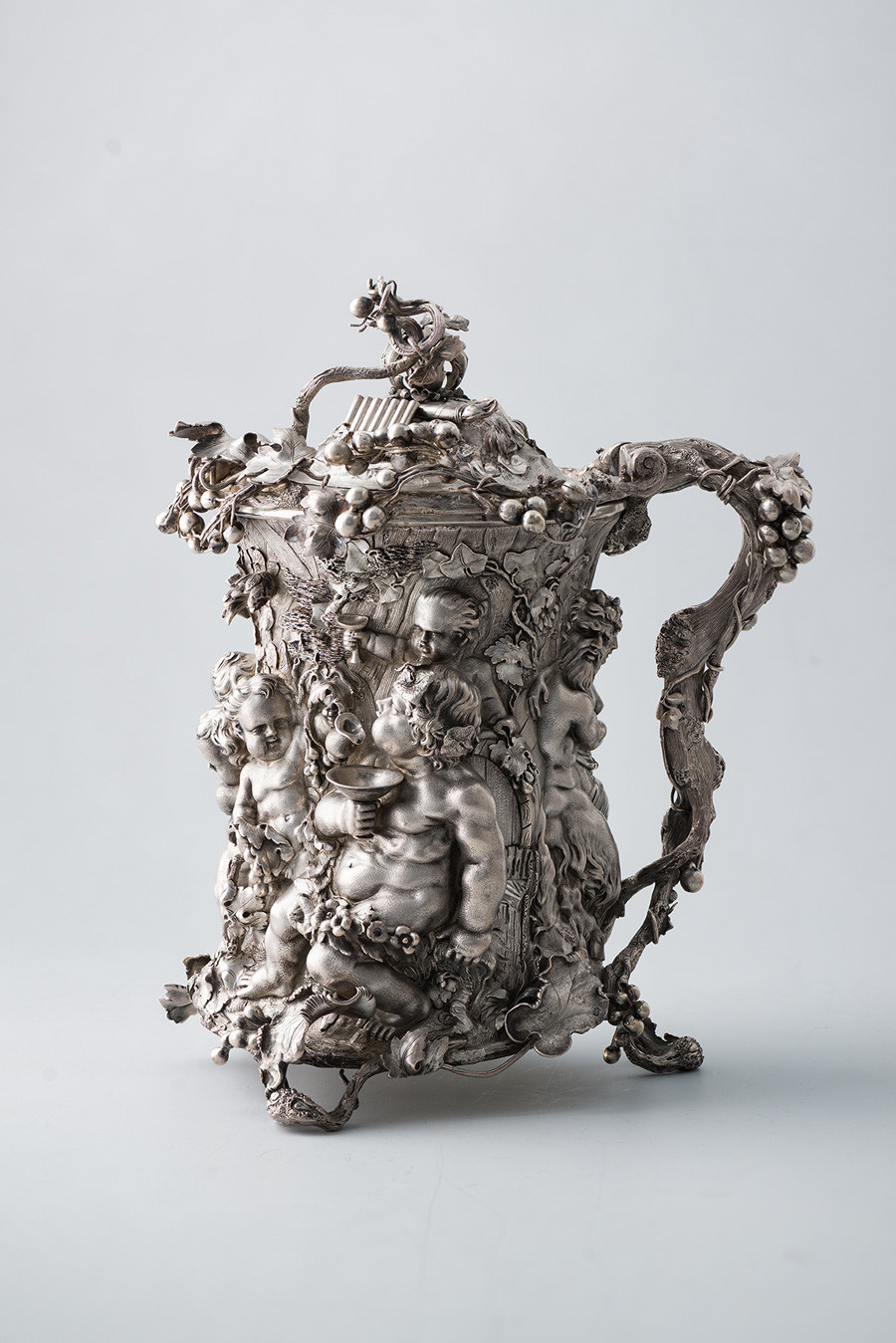 This baroque-style tankard with a lid has a vine climbing up its side for a handle and is decorated with cherubs pouring wine to each other. Incidentally, it was jeweler Fyodor Verkhovtsev's firm that produced silver churchware for St. Isaac's Cathedral in St. Petersburg. 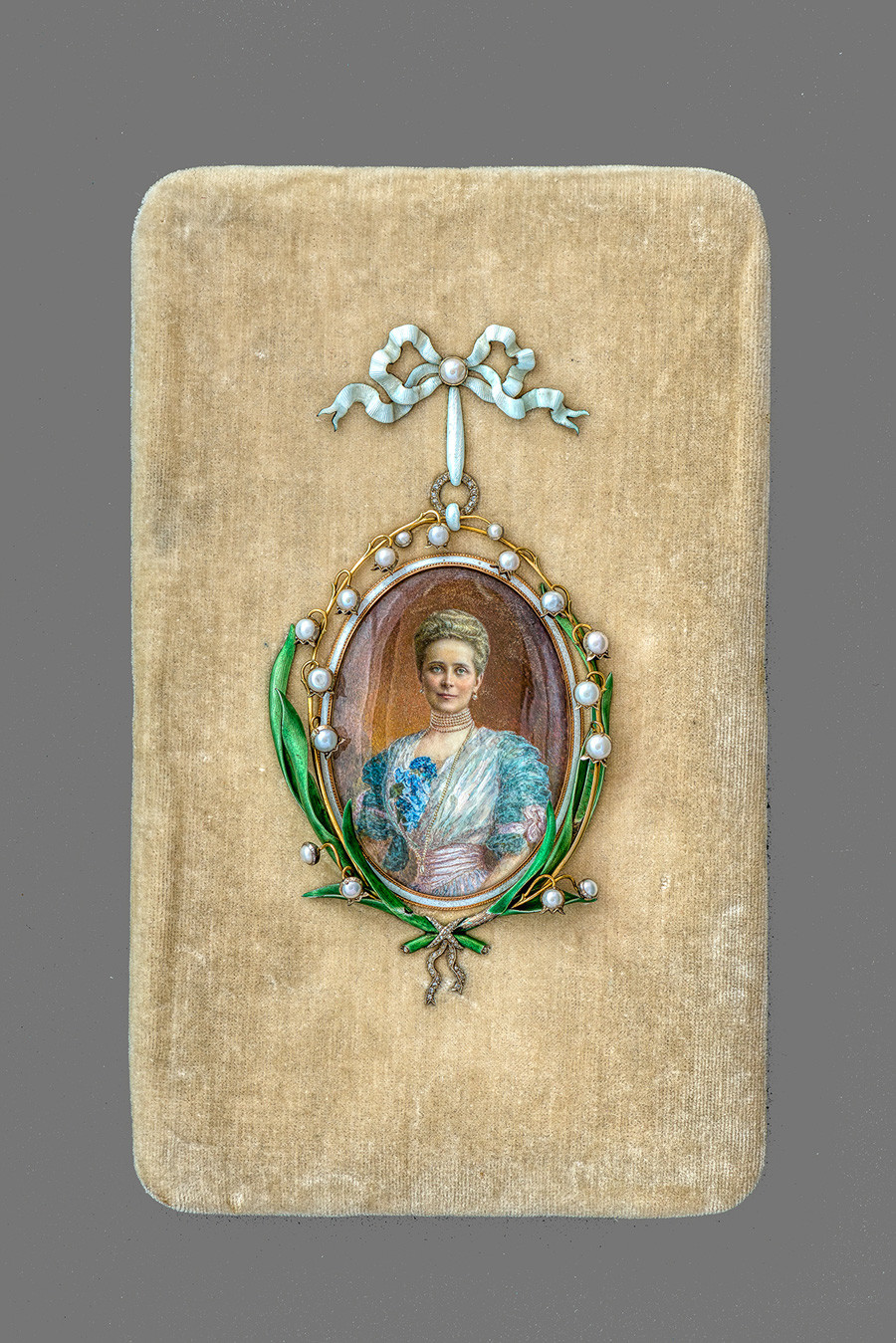 The frame was made in the workshop of Henrik Wigström, who in the 1900s was responsible for executing the most important orders received by the House of Faberge. The portrait of Princess Zinaida Yusupova, a representative of one of the oldest and richest aristocratic families in Russia, was painted by Vasily Zuev, an artist with the House of Faberge. (Incidentally, Princess Yusupova was the mother of Felix Yusupov, one of the conspirators behind the murder of Grigory Rasputin.)

All the above items can be seen in the exhibition 'Faberge and Other Court Jewelers' at the State Historical Museum (website in Russian) in Moscow, which will run till 30 April 2020.