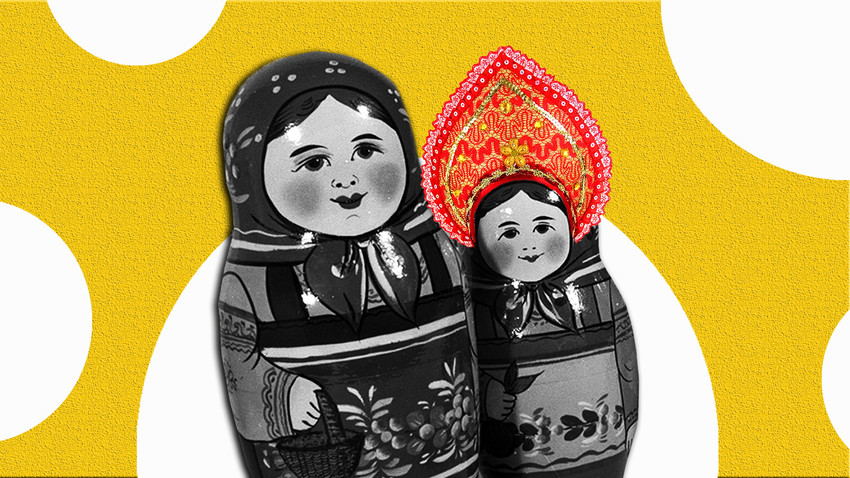 Alexander Cheprunov/Sputnik
These traditional souvenir toys are full of surprises (and smaller versions of themselves, of course).

1. Younger than you think 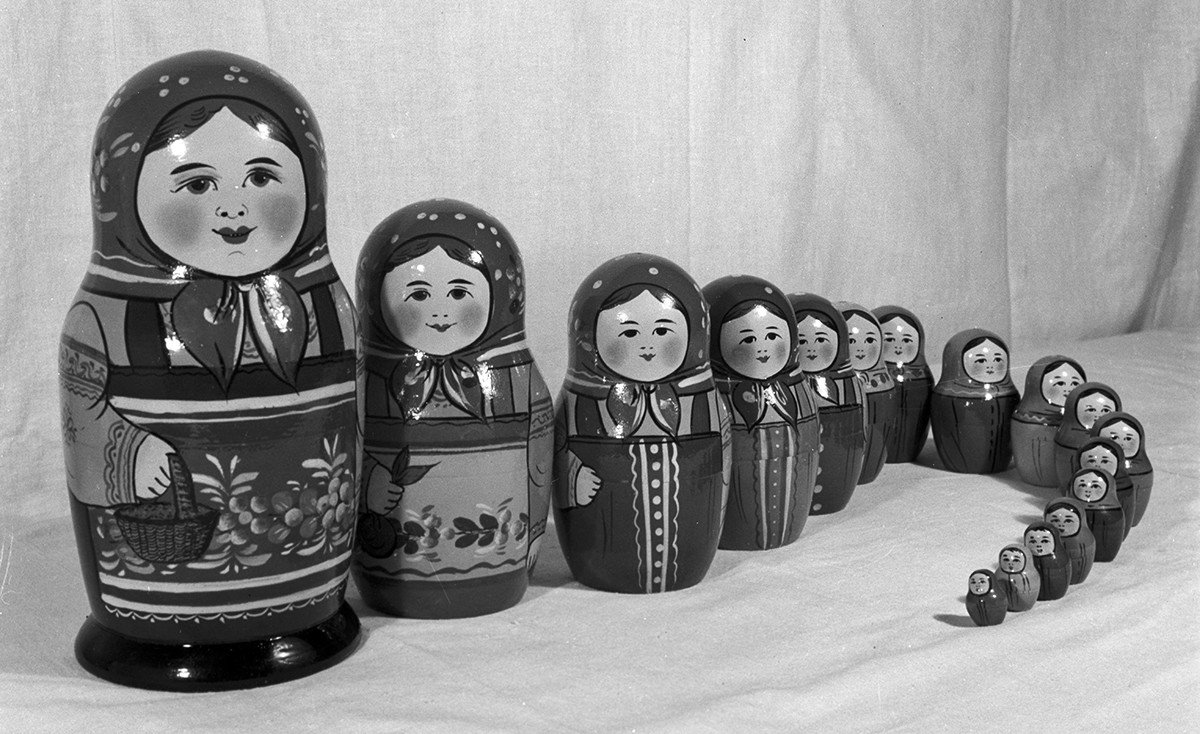 At first glance, the Matryoshka might look like an ancient folk character, but in fact, it only appeared in 1890 - and it has real “authors”, turner (lathe operator) Vasily Zvezdochkin and painter Sergei Malutin. Both men worked at the Savva Mamontov workshop for kids. Mamontov was a famous Russian industrialist, merchant and patron of the arts.

According to one version of Matryoshka’s creation, the wife of Mamontov once brought a wooden figure to the workshop. It depicted a Japanese wise man and contained five figurines of his students inside. Inspired by this multi-layer idea, Zvezdochkin carved eight wooden figures, and Malutin painted them.

Another version says that they created the doll themselves (there had already been some examples of such figures with “surprise” inside before – resembling Easter eggs), and the “Japanese origin” legend only appeared in Soviet times.

In any case, the first Matryoshka resembled a lady in a shawl holding a black cockerel. Inside were figurines of boys and girls, with the last one being a baby. This doll is still preserved at the Toy Museum in Sergiev Posad outside Moscow. 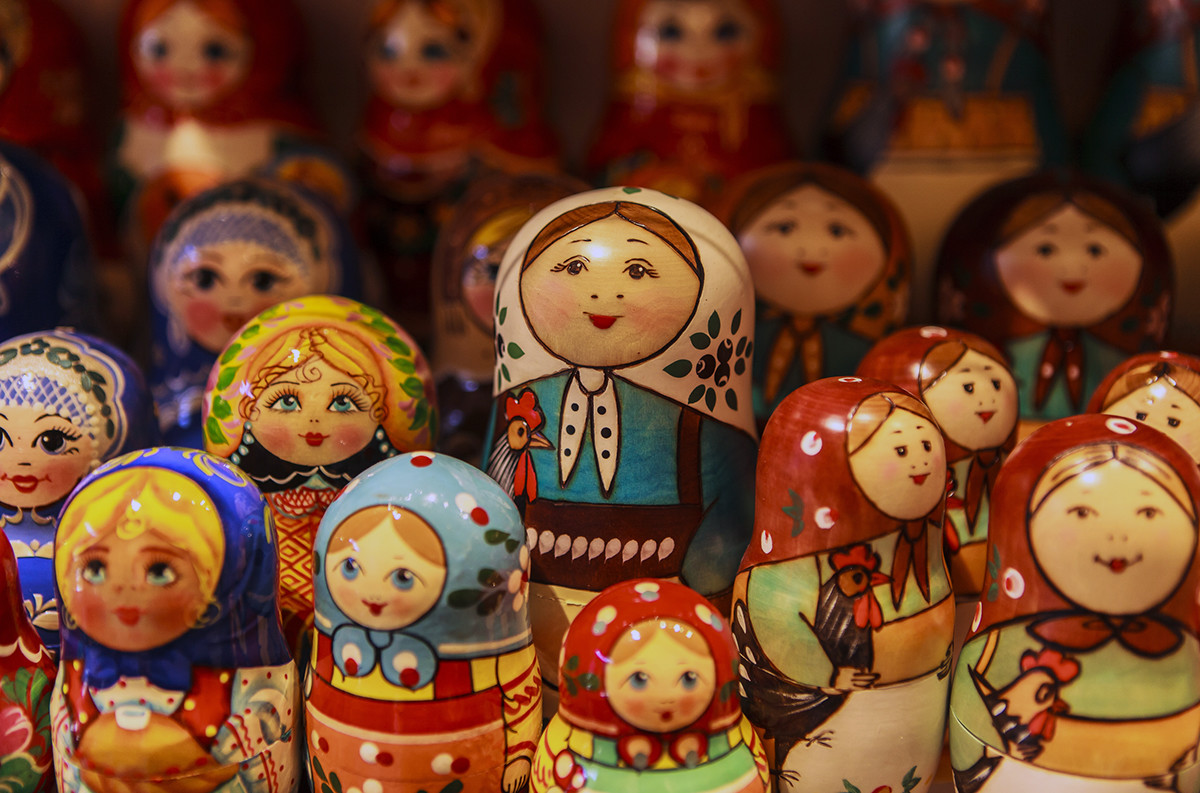 Matryoshkas at the Toy Museum.

Matryoshka is actually the “pet name” for the female name Matryona, that was popular in the 19th century among peasants and means “mummy”, “respectable lady” or “the mother of a big family”. Some rumors say that it was the name of Mamontov’s housemaid. After all, the name perfectly suited this Russian doll with the entire “family” inside.

3. There was a big gap in Matryoshkas production 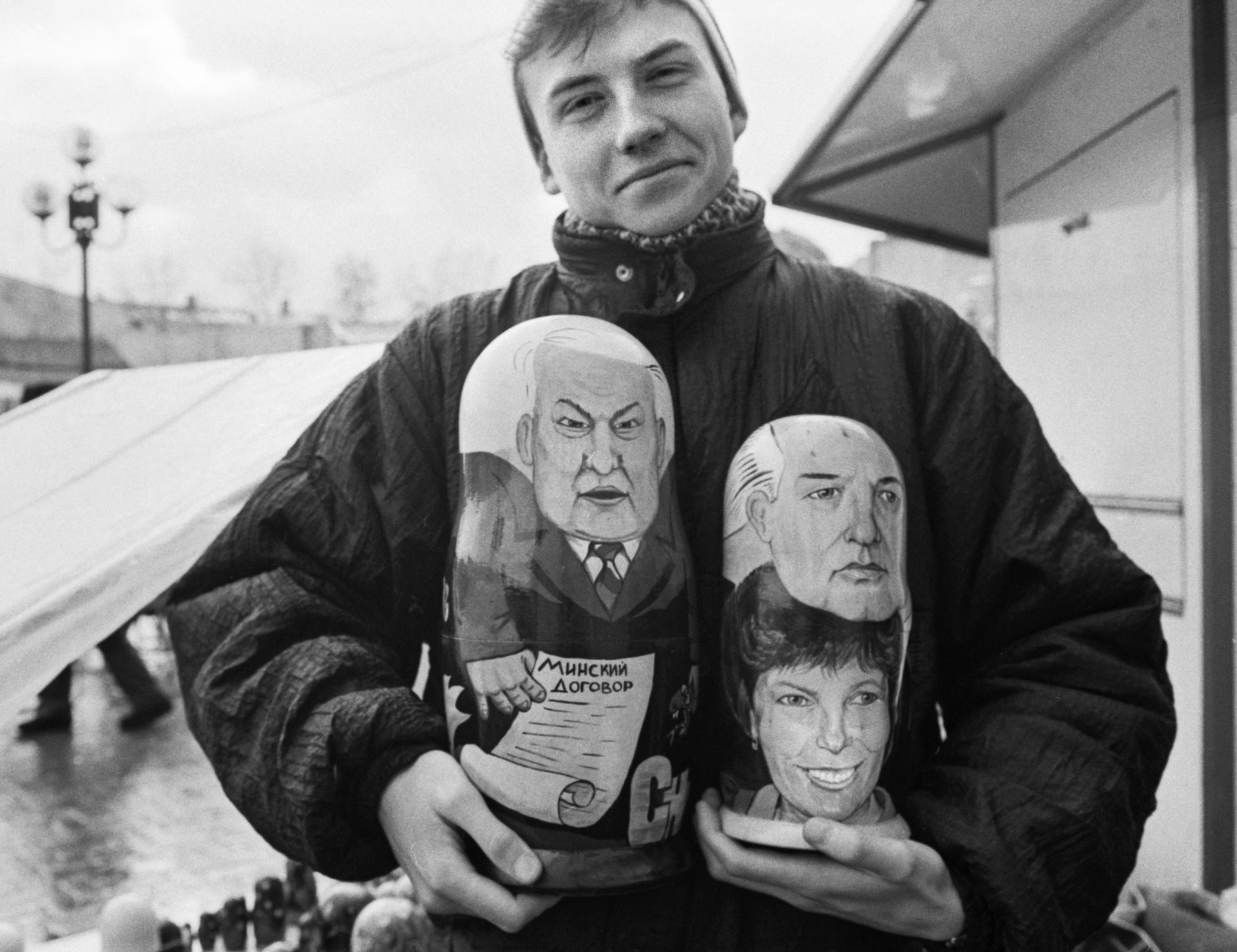 On the brink of the 20th century, Russian folk style became trendy in architecture, music, and art, thanks to Sergei Dyagilev’s ‘Russian Seasons’ and regular international crafts exhibitions. Russian Matryoshkas were on display in Paris, Berlin, London, Greece, Turkey and the Middle East. After the fall of the Russian Empire, the production of these dolls went into decline: the country was engaged in a civil war and then in World War II.

The “most Russian souvenir” was reborn in the late Soviet Union, when lots of foreign tourists began visiting the country and craftsmen started reviving old workshops. 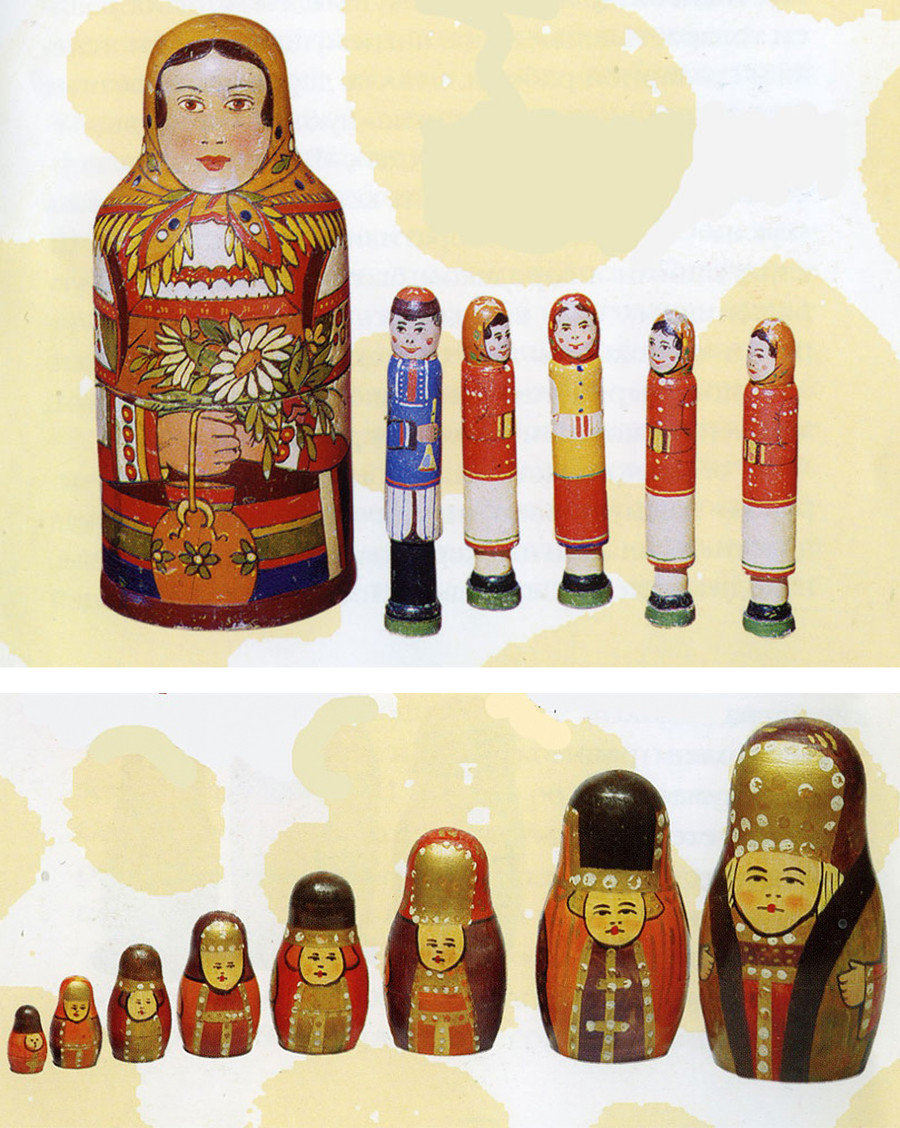 There are several Matryoshka production centers in Russia and therefore more than one main style of painting. The most famous style was born in Sergiev Posad (or Zagorsk in Soviet times), the city that has a long history of making wooden toys. They depict girls in a shawl and a saraphan (folk dress) with an apron, using only 3-4 colors (usually red, yellow, green) with black contours.

Another style of painting belongs to craftsmen from the village of Polkhov Maidan (near Nizhny Novgorod). They decorate their dolls with roses in bloom.

Matryoshkas made in Semenovo (Nizhny, too) wear yellow or red polka dot shawls and hold flowers. Usually, these Russian dolls consist of 6-8 figures.

5. Choosing the right type of wood for matryoshkas is the key 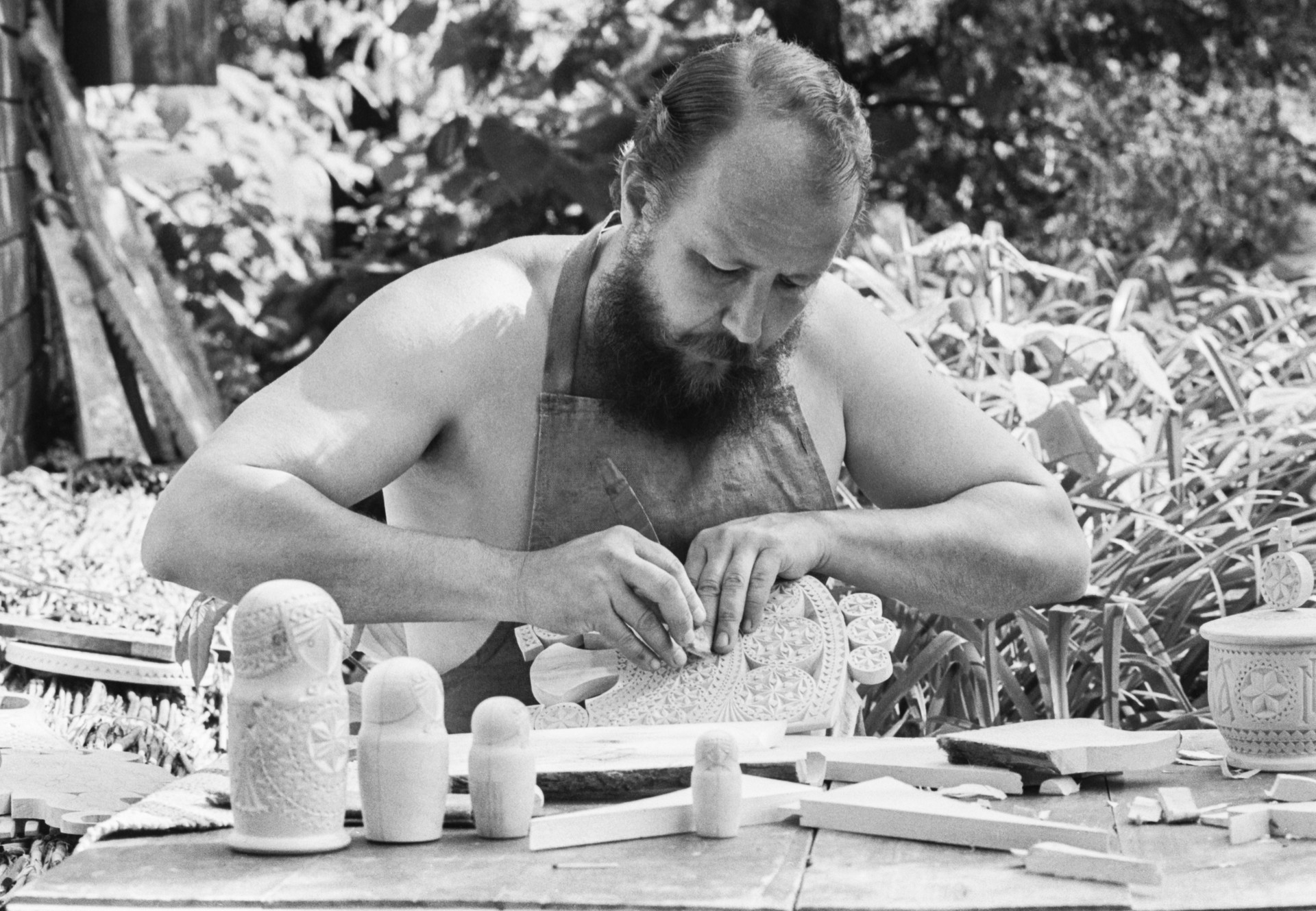 A Matryoshka starts from the right wood. The most suitable tree for making the doll is a linden. However, some makers also use wood from birch, aspen, or larch trees. The tree should be cut in early spring or winter, when it has little to no sap. The bottom part of the doll is made from wood that was dried for two to three years. The upper part is made from fresh wood, which will dry later: that’s why the doll can close so tightly. 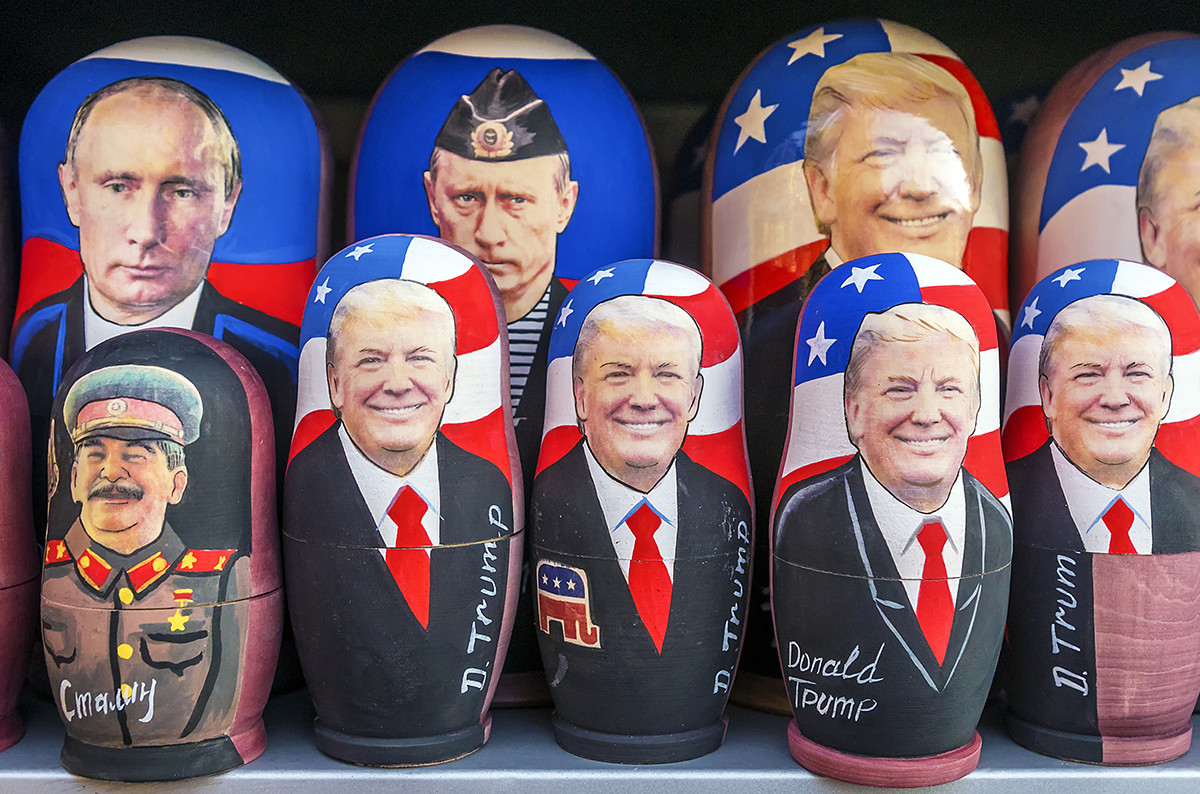 Russian artists often played with the Matryoshka concept to include irony in their creations. Even before the Revolution, there were such dolls as the groom and the bride with LOTS of their relatives inside. In 1912, commemorating the 100th anniversary of the Patriotic War, Kutuzov and Napoleon dolls with their armies inside were made.

Since Perestroika, craftsmen have been creating Russian dolls depicting famous politicians from all over the world. You can easily find Matryoshkas with Lenin, Trump and Putin in the local souvenir shops. Who do you think is inside them?

7. The biggest Matryoshka is located in China 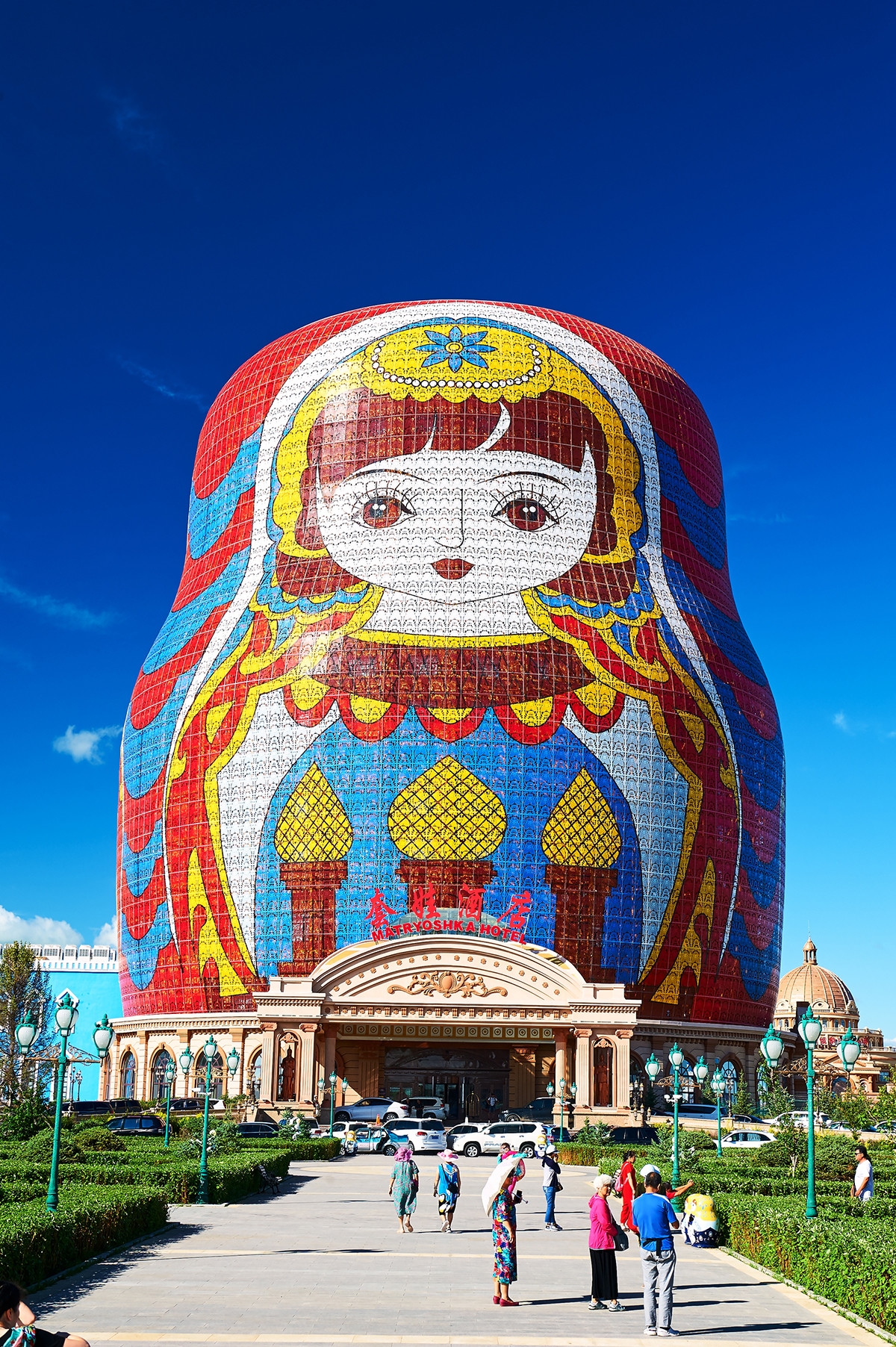 Near the Russian-China border, in the Chinese city of Manzhouli, is a mall and amusement park called ‘Matryoshka’ with officially the biggest Russian doll in the world. It’s height is a whopping 30 meters. The main Matryoshka is surrounded by eight smaller dolls and 200 even smaller figures. Moreover, the vast majority of modern Matryoshkas are also now made in China. In Russia, dolls are still produced in some villages in Nizhny Novgorod. So there’s every chance that while on Arbat street in Moscow and/or at other tourist locations in Russia you will accidentally buy a Chinese made Matryoshka. So, double check with the shop assistant.