Ilf and Petrov: The USSR’s most funny and daring writing duo 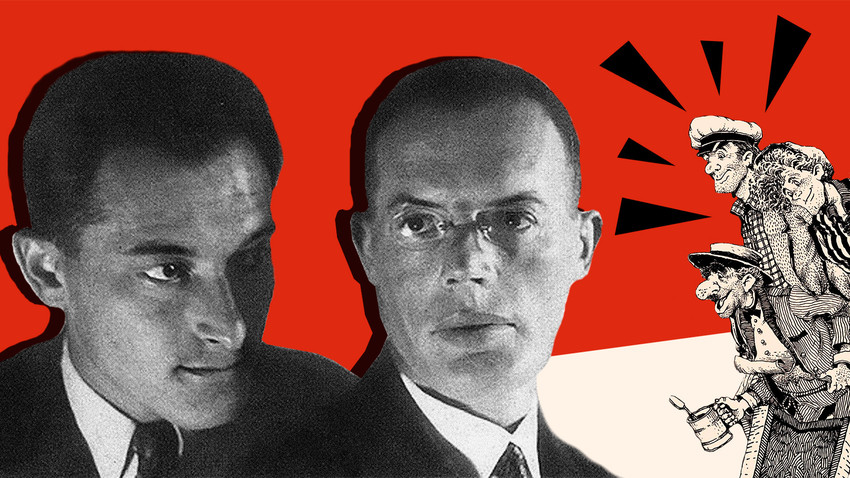 Getty images; Ilya Ilf/RIPOL Classic, 2008
They both died at a comparatively early age, and we can only guess how many more virtuoso novels they could have written. However, two of their works will ever remain in the "golden treasury" of Russian literary classics.

The two friends, Ilya Ilf and Evgeny Petrov, were born in Odessa, the humor capital of the Russian Empire (now Ukraine). This southern city on the Black Sea has arguably been, and still is, associated with more urban myths and legends than real stories. Thieves and resourceful conmen are the object of secret admiration and pride in Odessa, and the stuff of legends. One such conman, by the name of Ostap Bender, is the hero of the two writers' main work.

How their collaboration began

Ilf and Petrov met in Moscow in 1925. The former was 28 and the latter 23. Both worked for Gudok (The Whistle) magazine, editing articles and writing satirical sketches. 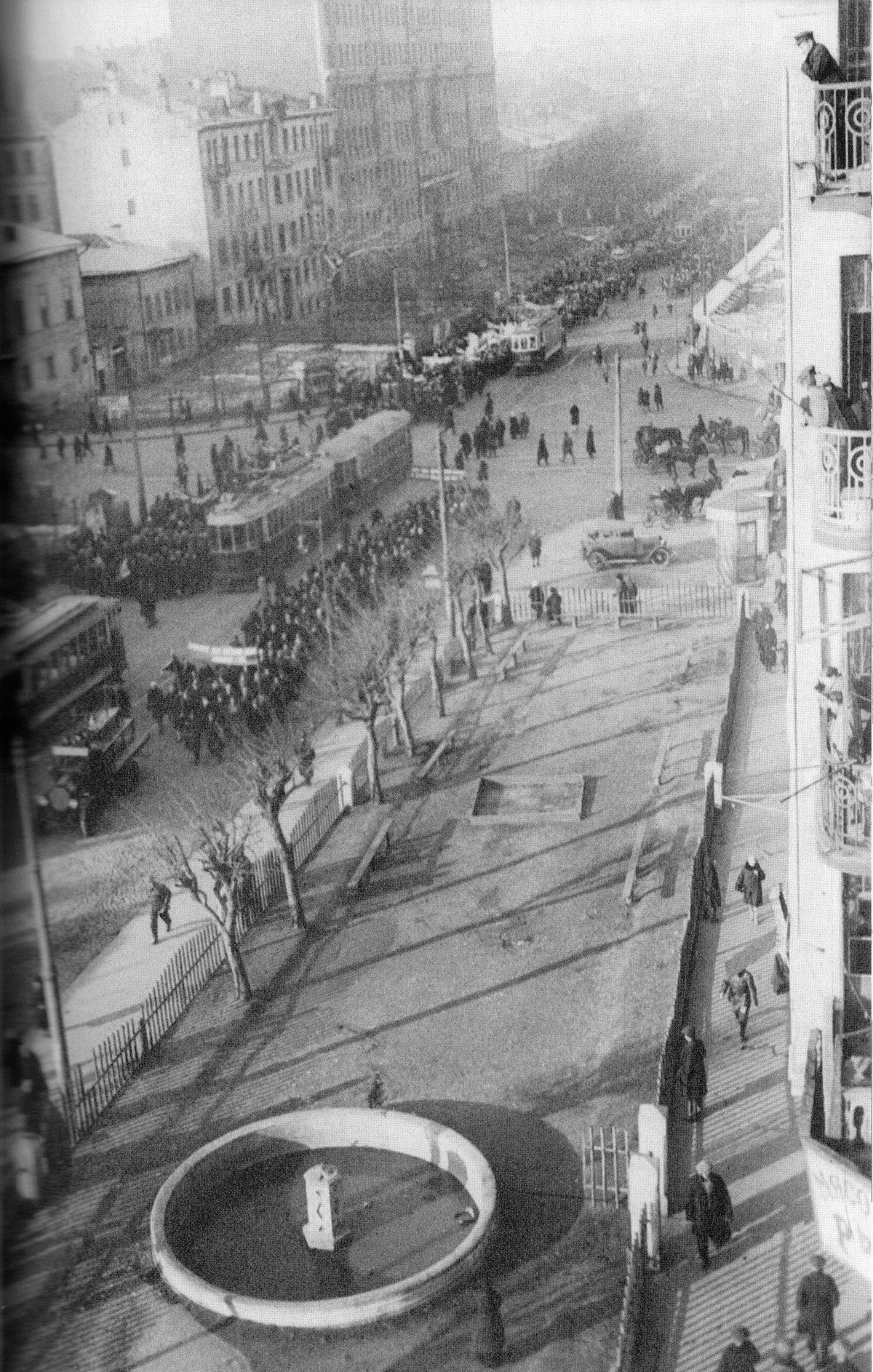 In their Double Autobiography the novelists joked that "the author was born twice": In 1897 and 1903, and "began to lead a double life"  from a young age.

The Jewish boy, Ilf, was the son of a humble Odessa accountant and bank clerk. Ilya himself graduated from technical school and worked at various times in a draftsman's office, a telephone exchange and a factory making hand grenades. 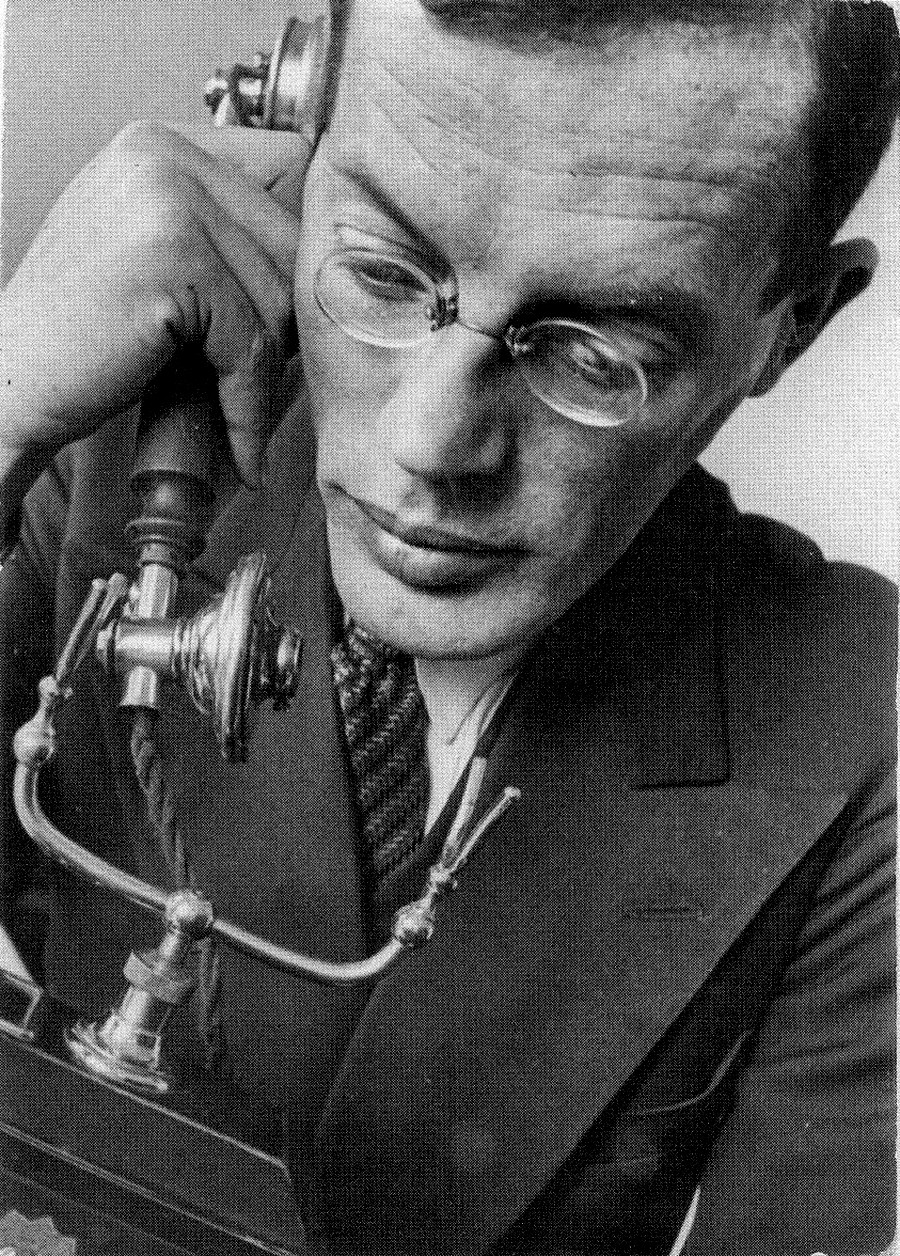 At the same time Ilf wrote poetry and, step by step, gained considerable stature among Odessa poets. In 1917, he began to work as a magazine editor and to write articles. Then, having decided to embark on a full-time literary career, he moved to Moscow in 1923.

His future professional partner, Petrov, came from a family of higher social standing: His father was a state official, and a seminary and military college teacher. He took Petrov and his brother on distant journeys - they sailed by steamer to Turkey and Italy, and saw a lot on their travels. 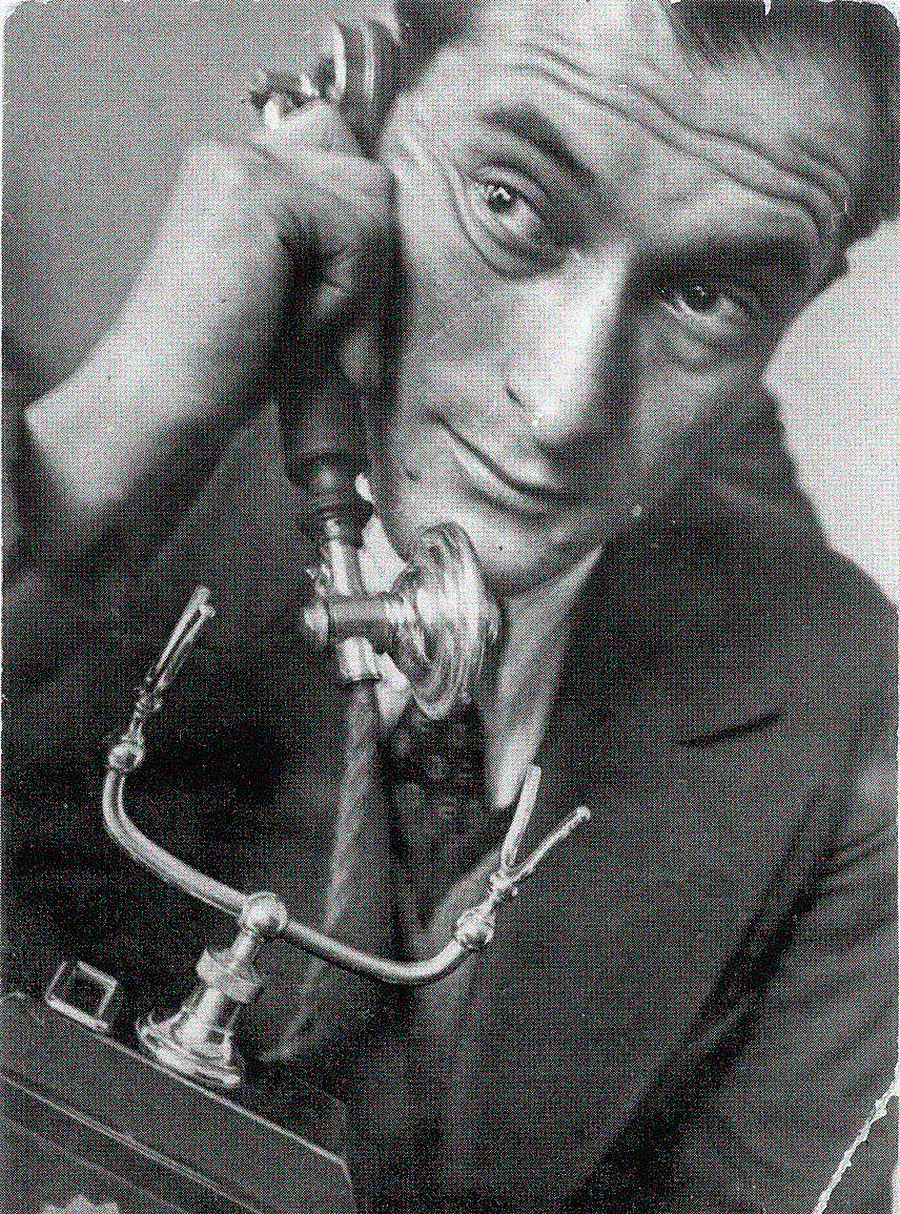 Petrov started as a police investigator in the Odessa Criminal Investigation Department. He solved criminal cases and was involved in eliminating criminal gangs. His real name was Kataev (his elder brother, Valentin Kataev, became a well-known Soviet writer). In 1920, the brothers were arrested on suspicion of involvement in an anti-Soviet conspiracy, but then were mysteriously released. 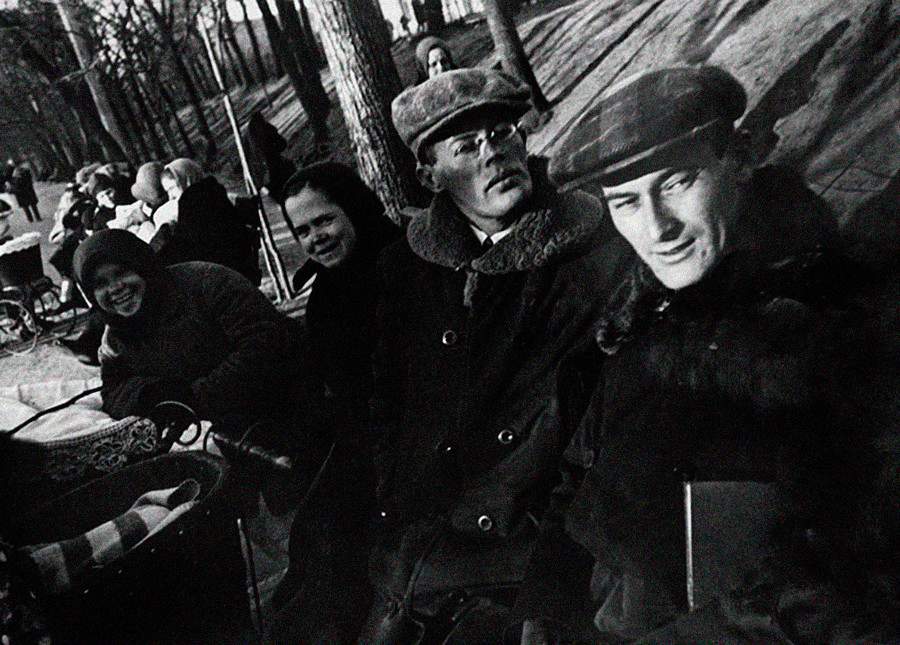 Ilf and Petrov in Moscow

The two Odessans, Ilf and Petrov, met in Moscow and became inseparable, writing humorous stories and short novels. According to legend, they embarked on their first big work as "ghostwriters" -  they started writing a long satirical novel at the behest of Petrov's elder brother, Valentin. On reading it, the latter was so impressed that he magnanimously decided to renounce his "authorship".

That novel was the legendary The Twelve Chairs, which was published in 1927 in a record space of time. It is astonishing that the censors approved this subtle satire directed against the new Soviet order. Here, for instance, is one of the jokes in the novel: "Where would you go? You have no reason to hurry. The GPU will find you themselves." (The GPU was the NKVD’s political directorate responsible for political repression) 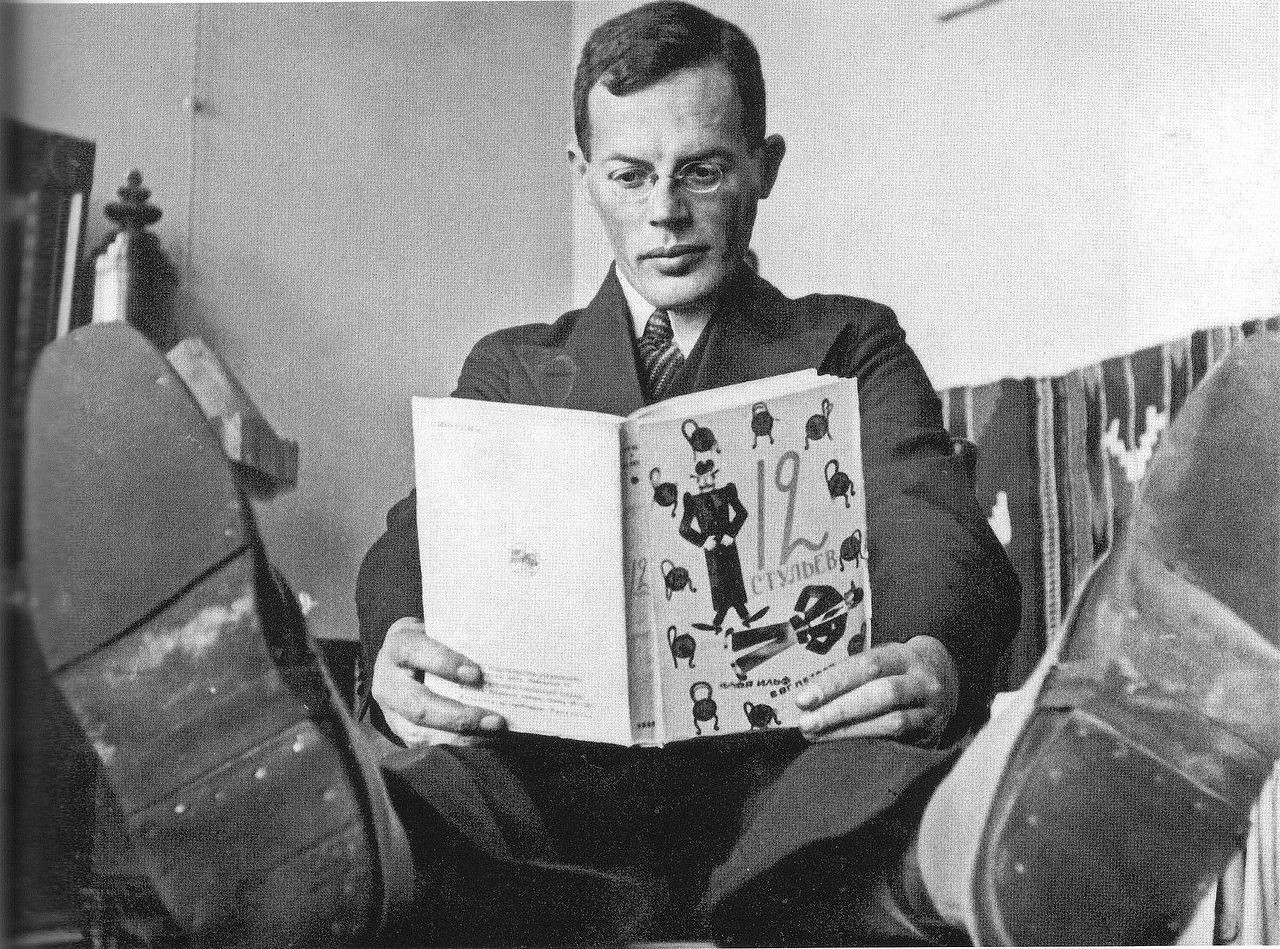 It's the story of two tricksters who meet in the fictitious town of Stargorod. Former landowner, Ippolit Vorobyaninov, comes to town in search of the family jewels that his mother-in-law sewed into the upholstery of one of the chairs in a drawing room at the time of the Revolution.

The conman Ostap Bender finds himself in Stargorod by pure chance. "His lively temperament, which prevented him from devoting himself to anything, constantly took him to different corners of the country and had now brought him to Stargorod without a pair of socks, without a key, without an apartment and without money.” 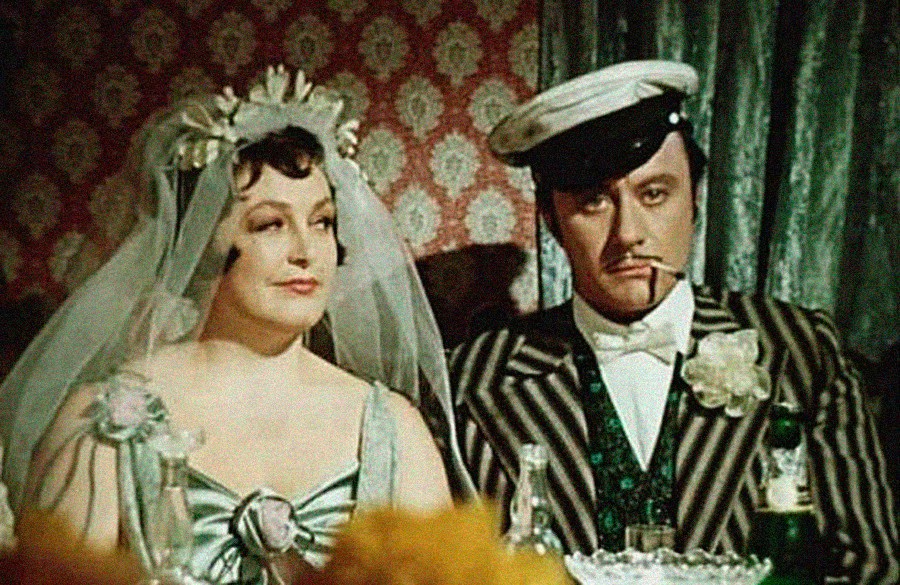 While devising his latest cunning plan to get rich and make it big without particular effort, he meets Ippolit. The diffident Ippolit decides to throw in his lot with the enterprising Bender, and they head off together to hunt down the valuables. 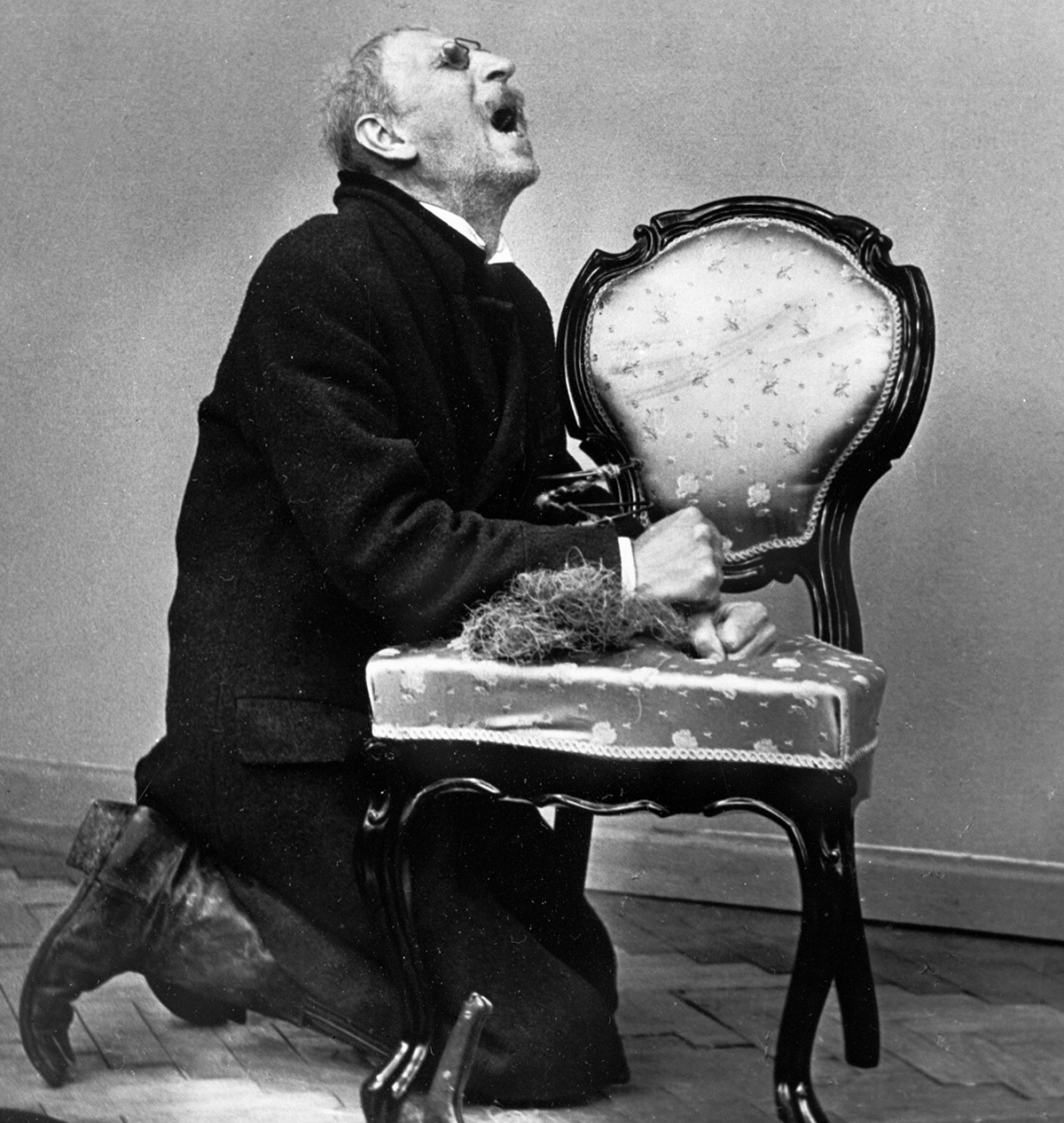 Subsequently, incredible adventures await the comic pair in their pursuit of the chairs, which were sold off individually after the Revolution and ended up dispersed all over the country. They have to resort to the most varied subterfuges to procure them from the most disparate people, from supporters of the Tsar to members of the petty bourgeoisie to ardent Bolsheviks.

After the enormous success of The Twelve Chairs, Ilf and Petrov went on to write a continuation of the adventures of Ostap Bender in 1931. The book was titled The Little Golden Calf. But while their first novel had easily cleared all the hurdles imposed by censorship, in the 1930s the functionaries overseeing literary output discerned a "lampoon against the Soviet Union". 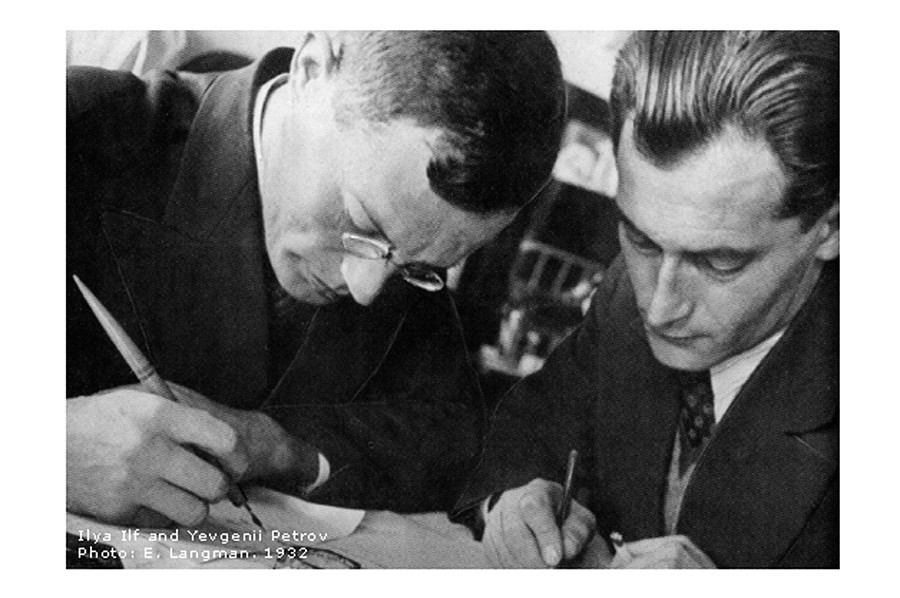 Ilf and Petrov while writing, 1932

They only printed the duo's new brainchild three years later. The book proved no less popular, and subsequently both parts were adapted for the screen quite a number of times - and the films went on to become classics of Soviet cinema.

In 1935-36, the writers went on a tour of the U.S. They traversed the whole country by car in the company of an American married couple, keeping a record of their travels and subsequently bringing out the travelog, One-Storied America [also translated as Little Golden America in allusion to The Little Golden Calf]. It contains a detailed account of their journey and their impressions: New York, the construction of San Francisco's Golden Gate Bridge, the everyday lives of Americans, landscapes and prairies, Hollywood, and etc. 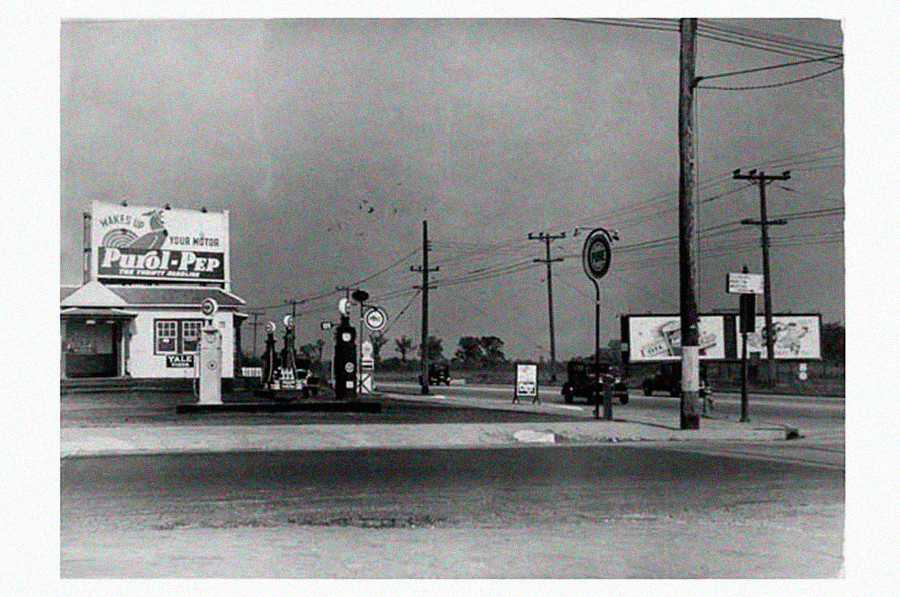 "I would caption this photo 'here, what America looks like'," Ilya Ilf

The young writers did everything together and, as they themselves joked: "they only got married five years apart". They had a lot of ideas and plans, but Ilf died of tuberculosis in 1937. Two year later, Petrov had a son whom he named Ilya in honor of his friend.

After the death of his co-writer, Petrov immersed himself in cinema, and later became editor of the magazine Ogoniok. In World War II, he wrote reports and features from the front lines. While on one of his work trips, he was killed in an air crash. Bizarrely, he was exactly the age that his writing partner, Ilf, had been when he had died.