How Tolstoy’s banned novella started a sexual revolution in Russia 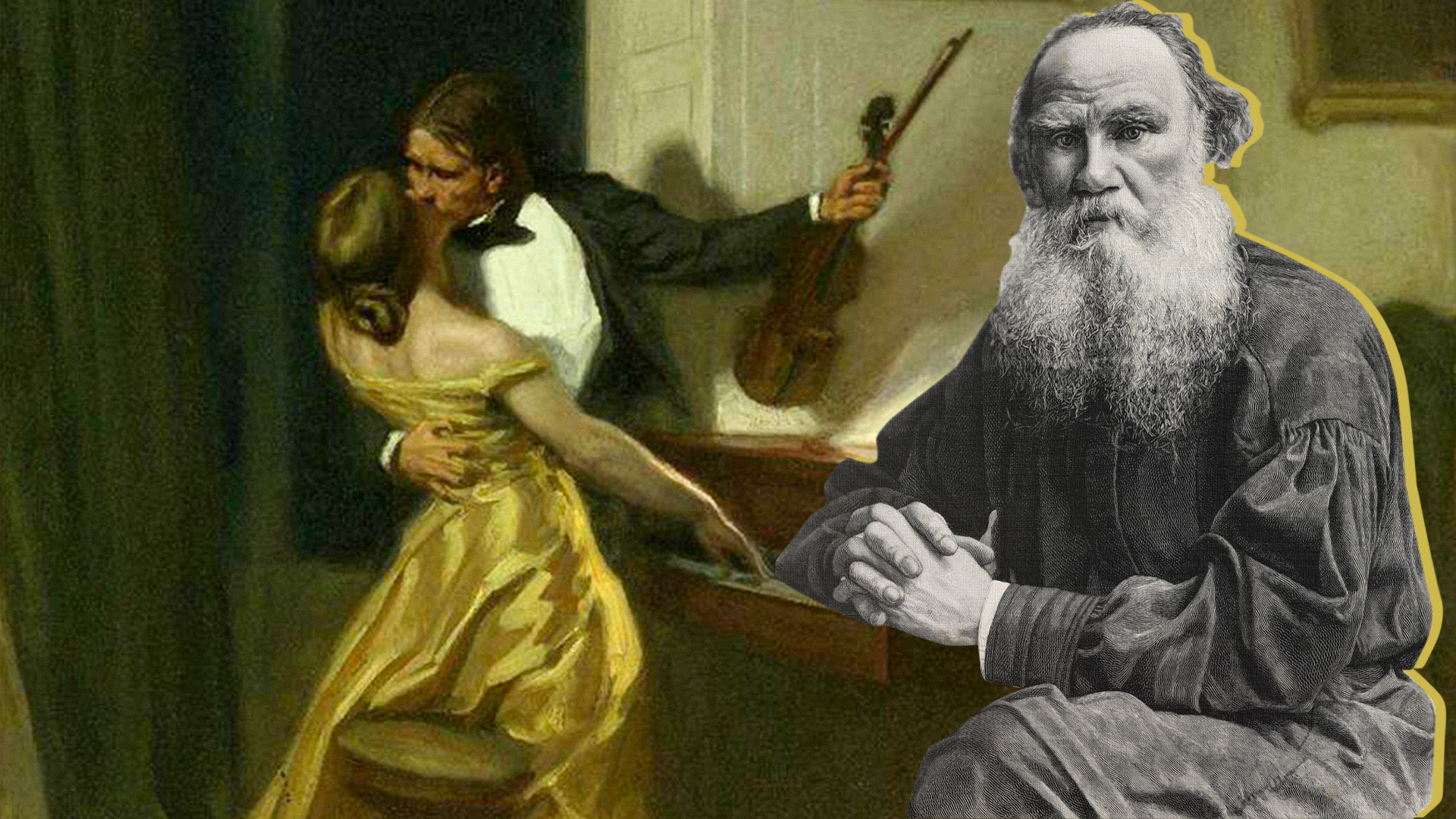 Getty Images; Private collection
A father of 13, by the end of his life, the writer underwent a spiritual transformation - he revised his attitude to marriage and to relations between men and women in general. In his scandalous novella ‘The Kreutzer Sonata’, Tolstoy proposed giving up carnal love altogether! That book had an enormous impact on the youth of the late 19th century.

Some considered Tolstoy’s 1890 novella The Kreutzer Sonata to be his best work, others, on the contrary, rejected Tolstoy’s views, while Theodore Roosevelt went as far as to call him a “sexual moral pervert”. Why did this short novella create such a stir among the public? And what does Tolstoy convey in it?

Murder out of jealousy

The protagonist, Vasily Pozdnyshev, tells his life story to a fellow traveller on a train. He killed his wife when, returning from a trip late at night, he found her playing music with another man. The court ruled that the murder was provoked by adultery and acquitted him, so Pozdnyshev was allowed to walk free.

After that terrible episode, Pozdnyshev went through a spiritual rebirth and claims to have realized the wicked state of society: “I didn’t kill her then, but much earlier. Just as they are killing now, everyone, everyone…” 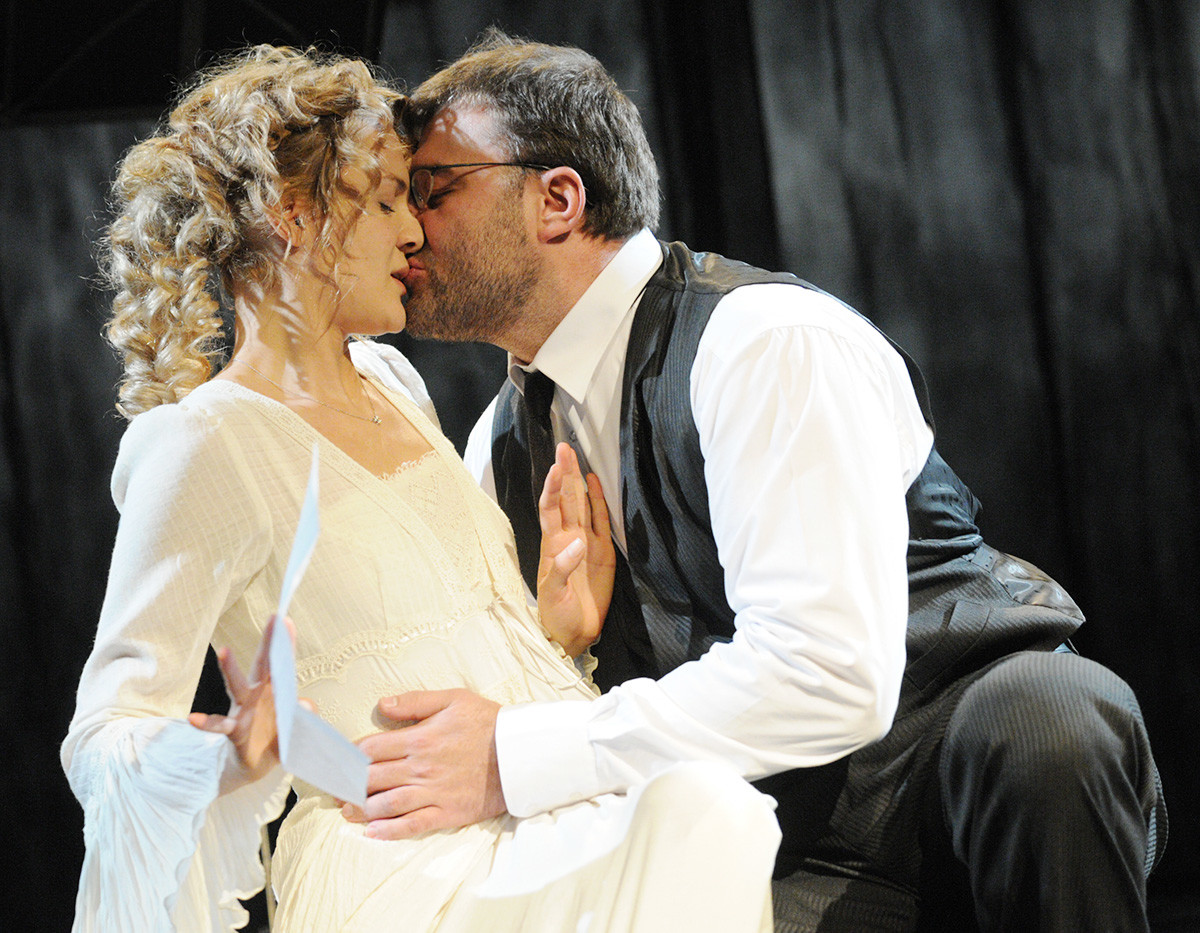 Actors Mikhail Porechenkov as Pozdnyshev and Natalya Shvets as Liza appear in a scene from ‘The Kreutzer Sonata’ by Leo Tolstoy staged at the Chekhov Moscow Art Theatre.

The book does not ever make it clear whether Pozdnyshev’s wife was unfaithful to him or not: Tolstoy is by far more preoccupied with feelings, rather than actions. In the epigraph to The Kreutzer Sonata, the author quotes from the Gospel: “I say to you that everyone looking upon a woman in order to lust after her already has committed adultery with her in his heart.”

“Tolstoy was convinced that the misfortune that befell his characters’ family stemmed from their sexual promiscuity before marriage, which taught them to expect from family life, first of all, the satisfaction of carnal desires. Disappointment brings Pozdnyshev to hating his wife and feeling obsessively jealous,” writes Andrei Zorin in his book The Life of Leo Tolstoy. Reading Experience.

Discussing sex education of boys and girls, Pozdnyshev notes with bitterness how morally corrupt the fashionable society is. Among people of his social circle, it is considered normal and even healthy for men to “indulge in debauchery” before marriage.

Pozdnyshev frankly shares his first sexual experience or, as he refers to it, the experience of “becoming a voluptuary”. Together with his brother, they went to a brothel with a group of friends. “I remember that straightway I was filled with such a profound sadness that I had a desire to weep, to weep over the loss forever of my innocence, of my relations with women. Yes, my relations with women were lost forever.” It is worth noting that this episode is autobiographical: Tolstoy had very similar experience and described it in his diaries. 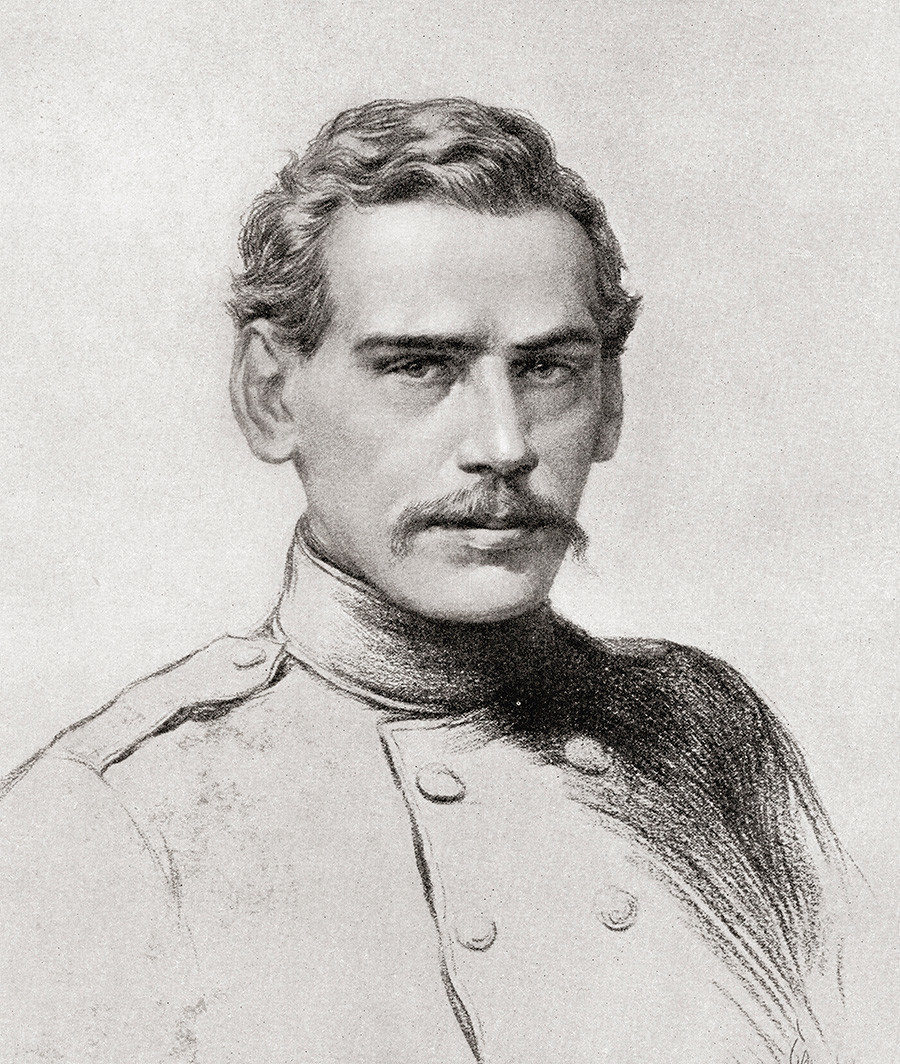 Young Leo Tolstoy as an officer in the Crimean War

At the same time, women are deprived of this “right” to have sexual relationships before marriage. However, according to Pozdnyshev, marriageable young women are no better than prostitutes. Their parents look for a mate for them and do everything to secure an advantageous match for their daughter. All women’s hobbies, be it knitting or playing music, are aimed solely at impressing a future husband.

When it comes to women’s outfits, Pozdnyshev delivers a whole tirade, saying that millions of people work in factories just for the sake of satisfying women’s whims and creating dresses that could momentarily attract a member of the opposite sex. Pozdnyshev says it is a horrible thing that women conquer men with their sensuality. “As soon as she is in possession of her means, she abuses them and acquires a terrible supremacy.”

Tolstoy was disillusioned in the institution of marriage

For its daring thoughts about marriage and undermining family values, The Kreutzer Sonata was banned by censors immediately after publication. Furthermore, in the U.S., the print run of newspapers which published a translation of the novella was also banned. However, it was this attraction of a forbidden fruit that made the book incredibly popular. Tolstoy was already an international celebrity, but with The Kreutzer Sonata, he captured the imagination of the whole educated society and especially young people. The novella was passed from one person to another in secret, in handwritten copies (in a kind of a forerunner to Soviet samizdat).

Pozdnyshev describes how he fell in love with his future wife. But, after a while, he saw it just as a confluence of a pleasant boat ride and a fetching dress she was wearing. After the wedding, there follows a “vile” honeymoon, which is nothing more than legalized vice. And then it turns out that the husband has no idea of what kind of person his wife is and is surprised to see anger or other new qualities in her. They have quarrels and misunderstandings and the only thing that can reconcile them is the birth of their children. 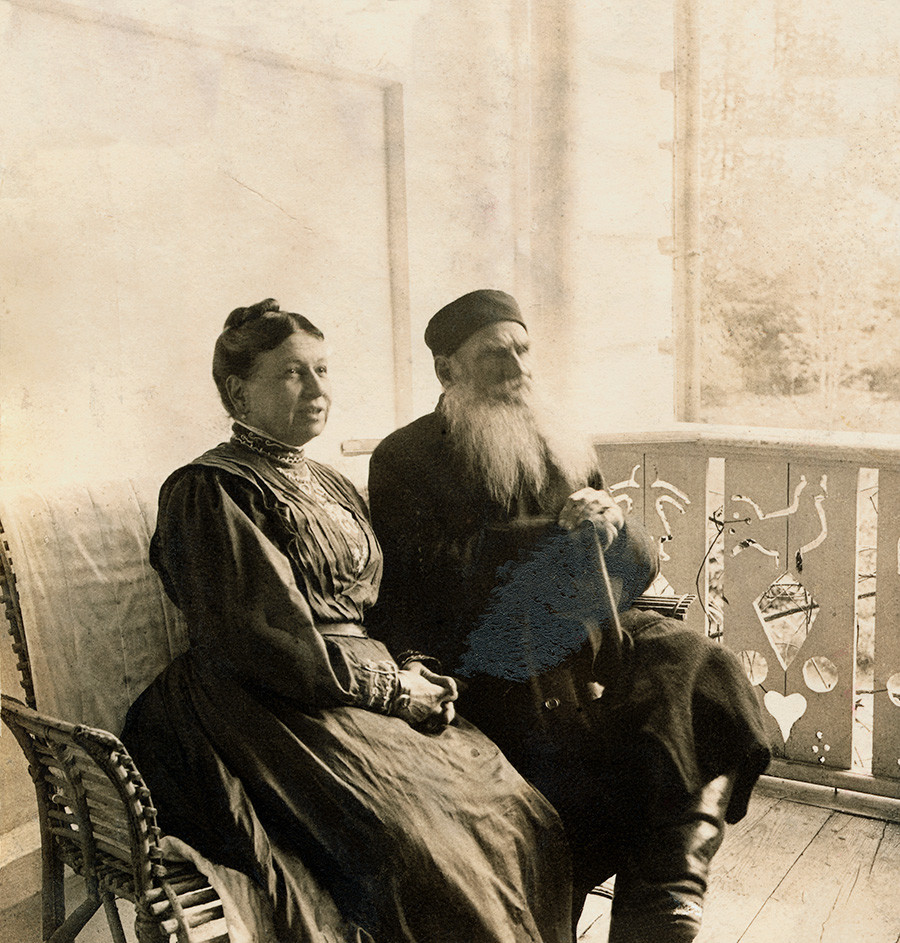 Tolstoy and his wife Sofya

It is in bearing and raising children that Pozdnyshev (same as Tolstoy) sees a woman’s purpose. That is why he is beside himself when he learns that after the birth of their fifth child, doctors advise his wife not to have any more children - and sees this as a violation of the law of nature. Furthermore, according to Tolstoy, a woman who does not plan to conceive but continues to have sex with her husband and even uses contraceptives is utterly immoral. This was an issue that the writer took close to heart - his wife, too, was advised not to have any more children, but he was opposed to her taking “measures” to avoid pregnancy.

Pozdnyshev believes that the best way forward is sexual abstinence. His fellow traveler and the accidental listener to his life history exclaims: But what about the human race? To which the protagonist replies that he agrees with Buddhists that human life has no purpose and that it will end anyway, same as the human race, so there will be no harm if it ends because everyone will live morally.

“Tolstoy obviously rejected the positive meaning of marriage itself, passing a verdict on marriage as a union of a man and a woman consecrated by the Christian tradition,” writes Tolstoy scholar Pavel Basinsky.

In the 1890s, The Kreutzer Sonata was a source of continued debate. Basinsky writes that “it was one of the decade’s main crazes”. The late 19th century was a time of an unprecedented rise in women’s emancipation. It is therefore not surprising that female readers saw another ethical problem in the story: why should a young woman remain a virgin before marriage, while a young man has the right to gain sexual experience in advance and is even encouraged by society to do so? 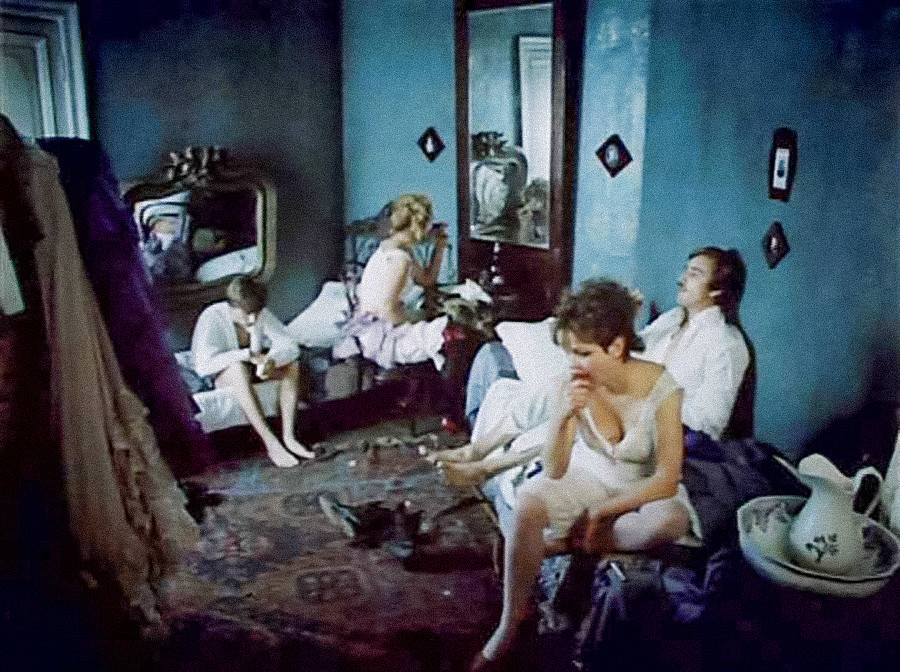 After Tolstoy’s novella came out, the issue of sexual morality began to be discussed even in the press. Yelizaveta Dyakonova, one of the first Russian feminists, wrote in her journals expressing indignation that any man “would consider it a shame for himself” to marry a woman who had relations with other men before him, whereas he himself considers it normal to have sexual experience before marriage. “And it’s everywhere, everywhere! Both in Russia and abroad! Oh my God, my God!” Dyakonova wrote.

If Tolstoy’s novella prompted Dyakonova to demand that men maintain innocence before marriage same as women, it prompted other women to realize the injustice of their situation and seek freedom.