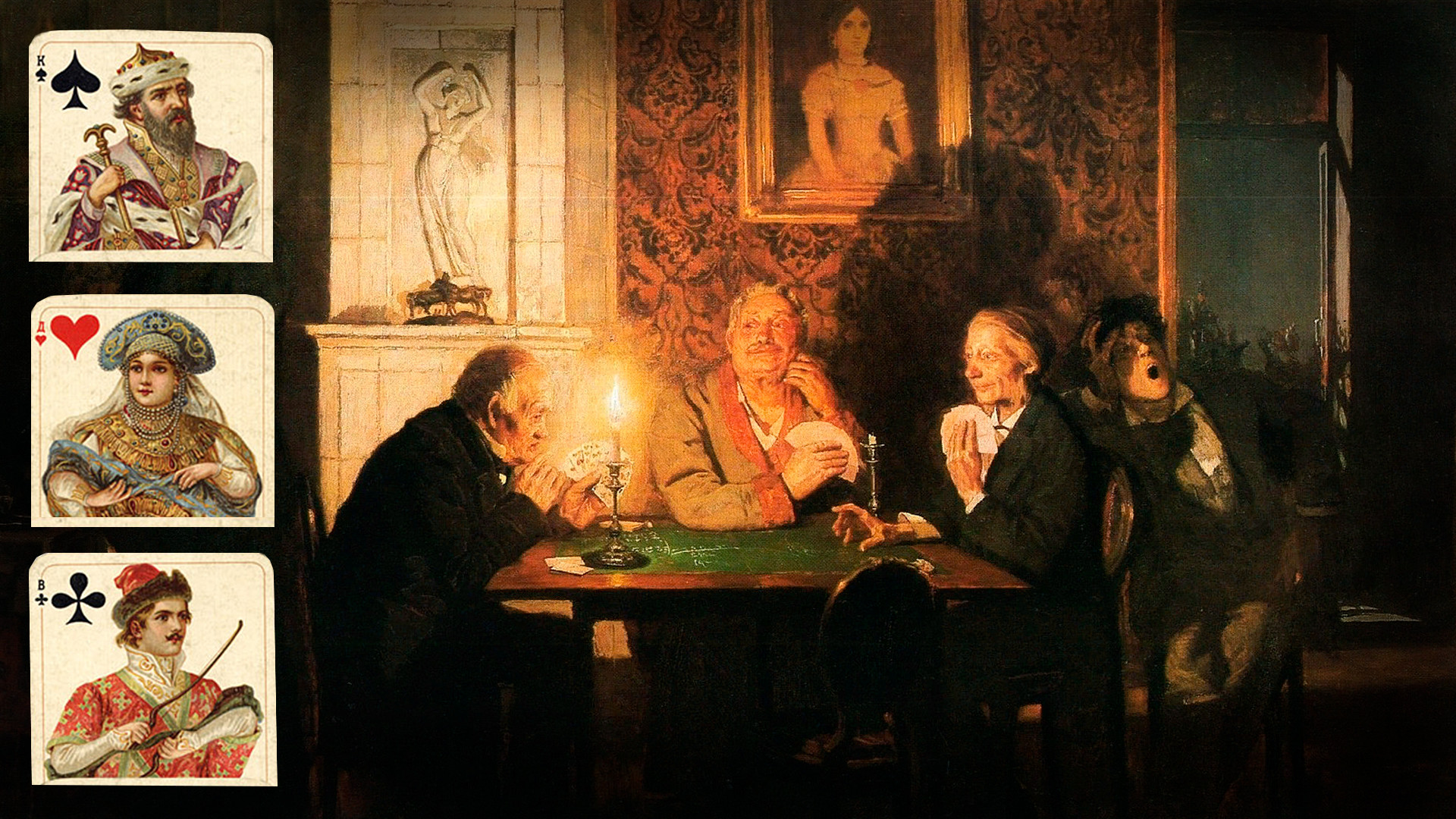 Tretyakov Gallery; Public Domain
Wagering your wife in a card game or defending your honor in a card challenge, not in a duel – for Russian nobles, card games weren’t just any old form of entertainment. In Russia, card games became popular as long ago as the 17th century and became one of the nobles’ main forms of entertainment for several centuries to come.

“The next night, Hermann was at the table again. Everyone was awaiting him. Generals and privy councilors left their own games of whist behind to see such an astonishing game. Young officers sprang off of couches; all the officials gathered in the living room. Everyone surrounded Hermann. The other players didn’t put down their cards, impatiently waiting for him to finish. Hermann stood at the table preparing to play against the pale, but still smiling, Chekalinsky alone. Each unsealed a deck of cards. Chekalinsky shuffled. Hermann drew and played his card, covering his stack of banknotes. It was looking like a showdown. A deep silence was heard all around.” The game of whist, written in Alexander Pushkin’s, The Queen of Spades, was a popular pastime for Russian nobles. 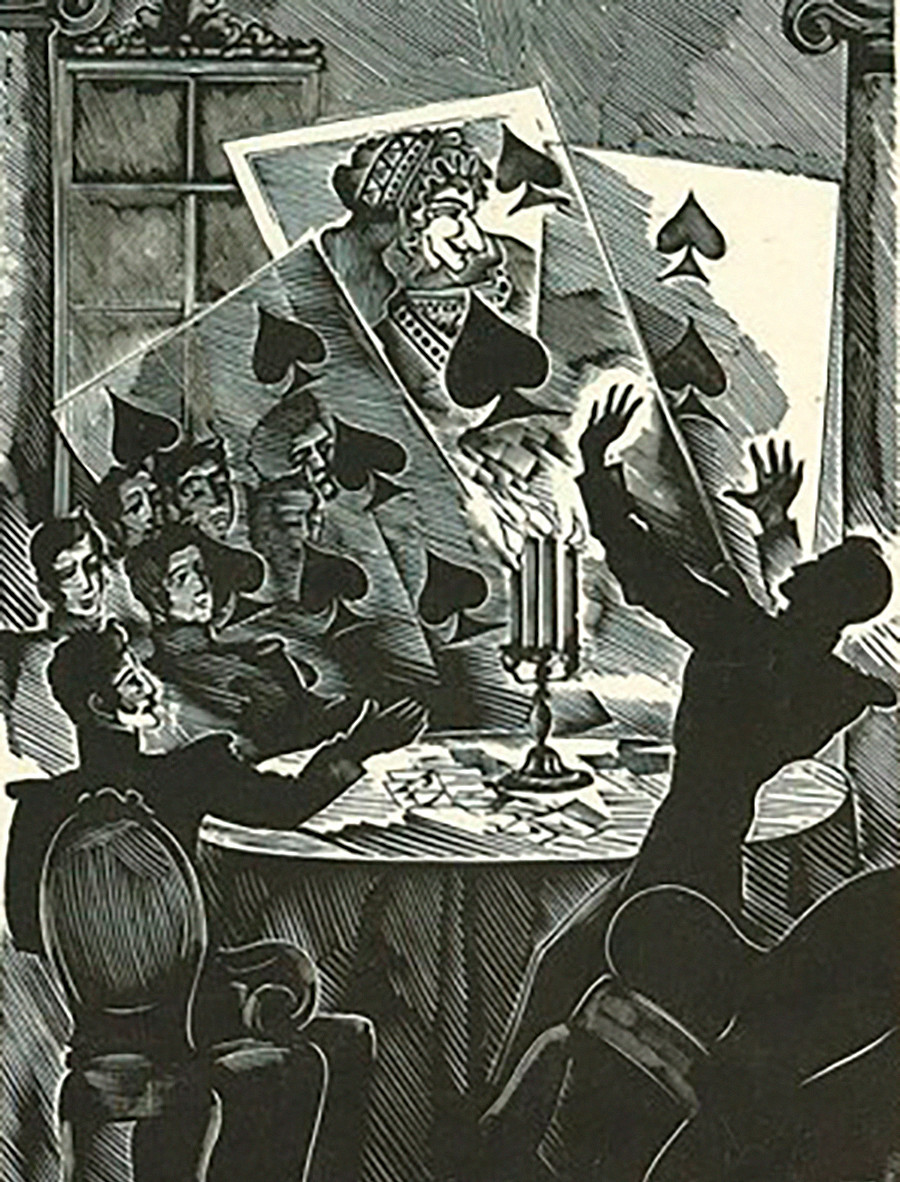 Alexei Kravchenko. An illustration to Alexander Pushkin's 'The Queen of Spades'

Gambling in Russia was already widespread as early as the 17th century. It’s mentioned under the heading, ‘On matters of robberies and thieves’, in Sobornoye Ulozheniye of 1694, meaning a ‘Council Code’, or a legal code of laws. There, gambling is compared to ‘Zern’, a contemporary game in Russia played with dice. It was popular among thieves and robbers and governors were ordered to punish its players. In fact, they were even told to chop off gamblers’ fingers.

Card games weren’t popular in the times of Aleksey Mikhailovich, or Mikhail Fyodororich, or Peter I and Catherine. In those times, hunting, balls, billiards and chess were popular among the aristocracy. Ivan the Terrible and Aleksey Mikhailovich themselves played chess. Peter I even sometimes forced his associates to organize a match for him. The emperor didn’t like card games and didn’t allow them at assemblies (balls).

Card games became prevalent among the nobility only during Anna Ioannovna’s reign. The 18th century was a time of imitating European culture, but foreign card games suddenly were considered a standard, respectable past time.

“Thanks to the system of serfdom and exemption from compulsory service, the nobility was able to achieve self-realization by creating a subculture of comfort and entertainment, in which card games were an occupation, a business,” says historian Vyacheslav Shevtsov, speaking about card games among nobles at a conference called Card games in Russian public life. He adds, “Card games not only organized time, but it also fulfilled a communicative function. Commercial and strategy games were accompanied with conversation, making acquaintances and determining one’s position in society based on the players around him.”

Card games were divided into two types: games of strategy and games of chance. The former was considered as respectable and, at the time, the latter was denounced by secular society. The goal of games of chance was winning money. The higher the stakes, the higher the risk and hence the higher players’ excitement. Emotional intensity would captivate the player more and more – causing many to lose everything in one night. The player’s fate depended on chance and luck. Some games of chance were shtoss, baccarat and faro. 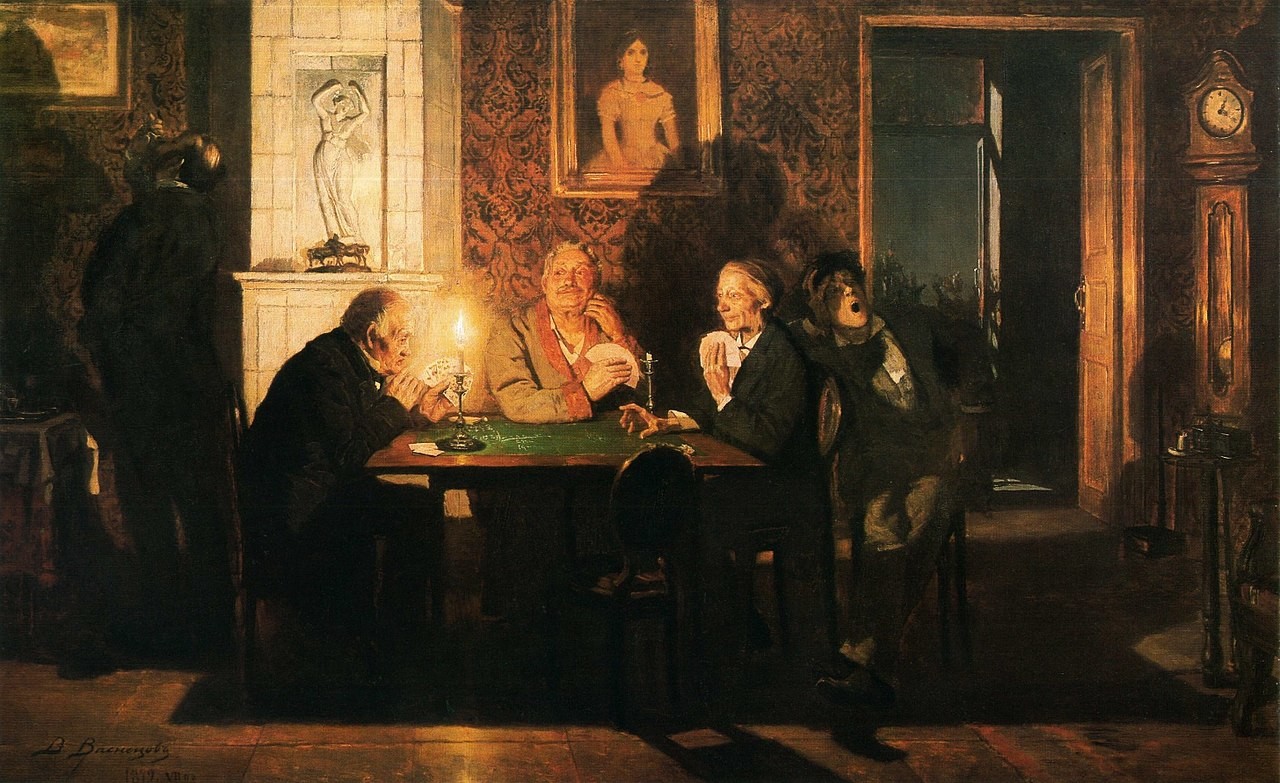 Despite the wide popularity of card games among both nobles and peasants, the government attempted to prohibit such leisure activities. Public servants worried that land and large sums of money would quickly be gambled away. This became part of the cause of the nobles’ ruin. One of Empress Elizabeth’s decrees from June 16, 1761 declared that in games of strategy, “nobody and nowhere (excluding the Imperial Majesty’s apartments) in any form or under any pretext shall play [cards]” for money and/or valuables.

It was especially important to play cards “not for the sake of winning, but solely to pass time” and “for the smallest sum of money”. Violators were required to pay a fine, which was often up to two times higher than the amount of their yearly salary.

Gambling in spite of prohibitions

Still, neither decrees nor prohibitions frightened the nobles. But why? Gambling attracted more and more players among the upper classes, due to its principle: A person did not know for sure whether he would win or not. Thus, one believed that he played not with an equal player, but with fate. Luck, happiness or loss all delighted the 18th century Russian nobleman. The harshness of life-limiting laws created a need for release.

Writer Yurii Lotman, in his book Life and traditions of Russian nobility (18th – early 19th centuries), discusses this phenomenon as, “Tough restrictions, which permeated into a person’s private life created a psychological need for bursts of unpredictability. And if, on one hand, attempts to crack the secrets of unpredictability were fueled by the desire to control chaos, then, on the other hand, the atmosphere of the city and country in which ‘the spirit of captivity’ intertwined with ‘a stern look’ produced a thirst for the unpredictable, the wrong and the random.” 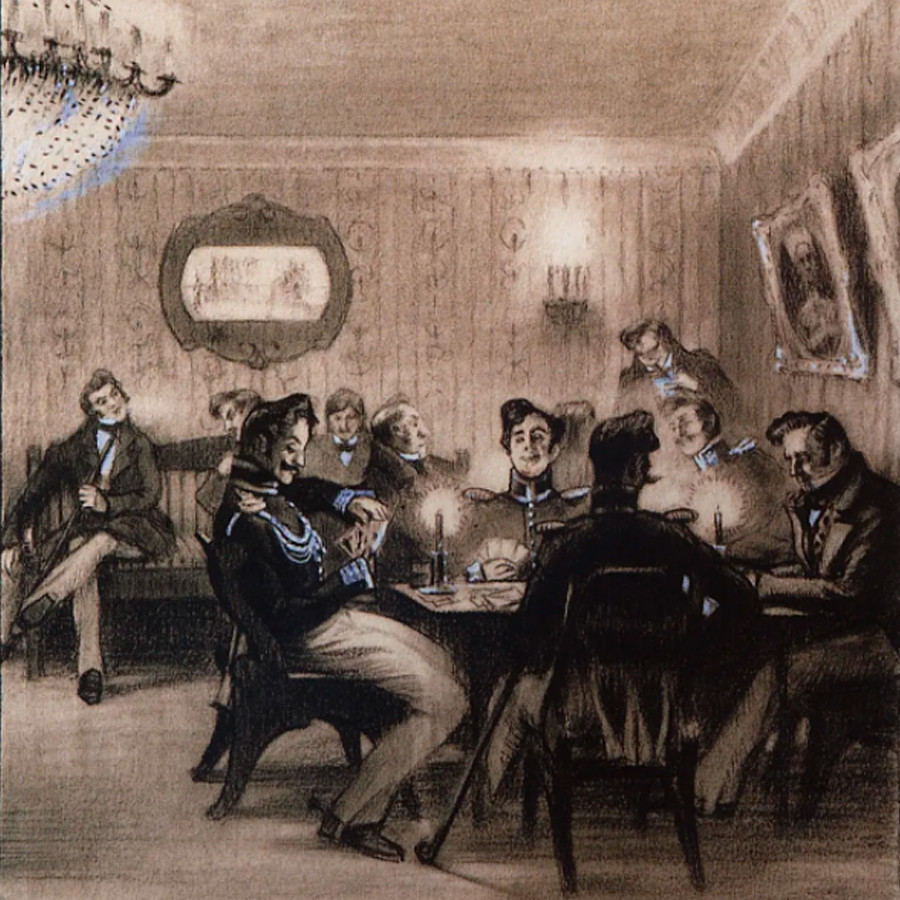 Boris Kustodiev. Whist (An illustration to Nikolai Gogol's 'The Carriage'

Hope for winning and excitement piqued the players’ imagination. They surrounded the game process with an aura of mystery and were superstitious. For example, in the book Secrets of Card Games (1909), a table was published indicating lucky days for games and players’ birthdays.

The 19th century was the heyday of card games. They became a form of entertainment, not only for adults, but for children, too. The older generation didn’t like it and attempted to warn young people about the negative consequences of playing cards.

For example, in Yuriev and Vladimirskii’s book released in 1889, Pravila svetskoi zhizni I etiketa. Horoshii ton. (Lit. Rules of secular life and etiquette. Good manners), they refer to the game as “a disgrace to drawing rooms, a deterioration of morals, and a hindrance to enlightenment”. However, after expressing contempt for gambling, the authors still conclude, “If you live among wolves you have to howl like a wolf” and give young people ethical advice on card games: when to sit at the table, with whom to talk during the game and who to avoid. As Yuriev and Vladimirskii explain, “knowledge of card games quite often might present the opportunity to get out of predicaments,” when one has to take the place of an absentee at the game table.

These fears weren’t in vain. Carelessness and gambling quite often led to tragedies. One such story happened in Moscow in 1802 involving Earl Lev Razumovskii, Prince Aleksandr Golitsyn and his young wife Maria Golitsyna. As the story goes, the Earl was in love with the Princess and Golitsyn knew very well. Thankfully for Razumovskii, the Prince was obsessed with playing cards. One day, they met at the card table, where the highest stakes were set – the prize was Maria Golitsyna. The Prince wasn’t worried about possibly losing his wife, “whom, as he knew, shared mutual feelings for Razumovskii,” mentions historian Georgii Parchevskii in the book, Byloi Peterburg. Panorama stolichnoi zhizni (Lit. St. Petersburg of old. An overview of metropolitan life). In the end, the Earl Razumovskii won Maria Golitsyna in a game of cards. 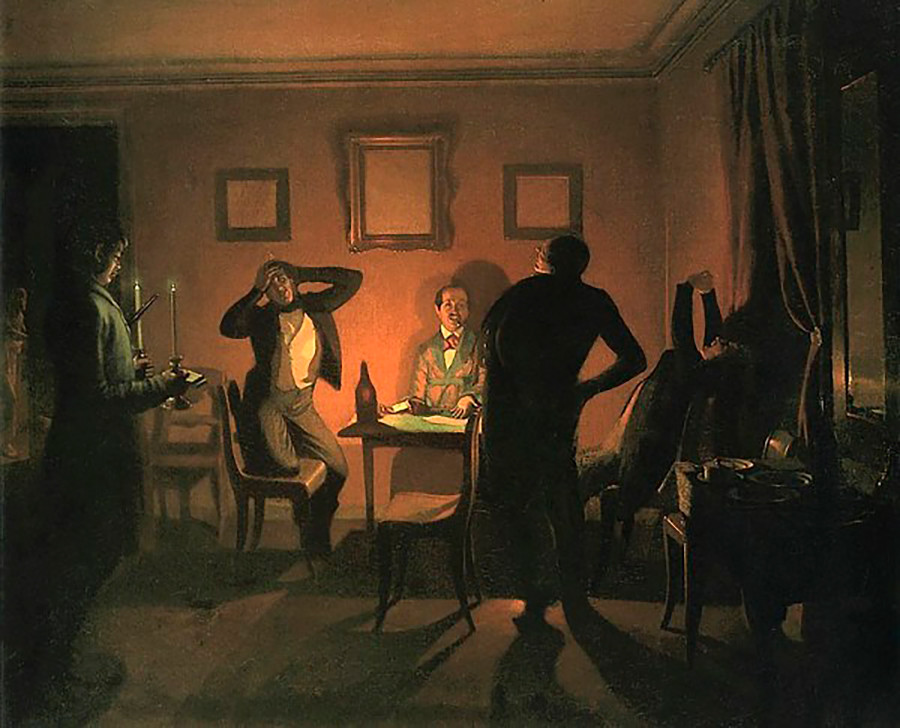 Fate favored the lovers – the church permitted divorce. However, the consequences of the game’s outcome became known to the entire city and, due to this, the young Razumovskaya was ostracized. Alexander I helped her break free from the difficult situation. In 1818, the Razumovskiis attended a ball in Moscow, where nearly the entire royal family attended. Maria Razumovskaya sat at the end of the royal table. When dinner began, the sovereign turned to her with a question, calling her His Countess. Undoubtedly this pleased Razumovskaya: Her second marriage and status were acknowledged by the Tsar himself.

Yet, the loss of one’s honor, large sums of money and even an entire fortune still didn’t frighten people. More and more new players sat at the green-clothed table wanting to get rich and try their luck.

Card games were not only a form of entertainment, but rather a source of income for nobles. Fortune’s well-known favorite was Fyodor Ivanovich Tolstoy, also a duelist and card player. In his youth, he frequently lost matches, but then Tolstoy came up with his own rules to the game, which helped him recover his losses. One of his rules says: “When you’ve won double the amount expected, hide it and use the first [half of the money], to play for as long as you have the desire, a game and money.” Soon, he began to win and recounted his victories in his diary as, “I won 100 rub. from Odakhovskii and I’m even with everyone in Crimea.”

Nobles could also defend their honor in a card game, much like in a duel. A face-off in which the opponents go up against each other, even if bloodless, still cruel to the point of shaming the honor of the opponent in front of the audience. “A game is like a weapon. A game and its outcome are like an act of vengeance,” describes Georgii Parchevskii regarding the “card duel” in his book, Byloi Peterburg. Panorama stolichnoi zhizni (Lit. St. Petersburg of old. An overview of metropolitan life). 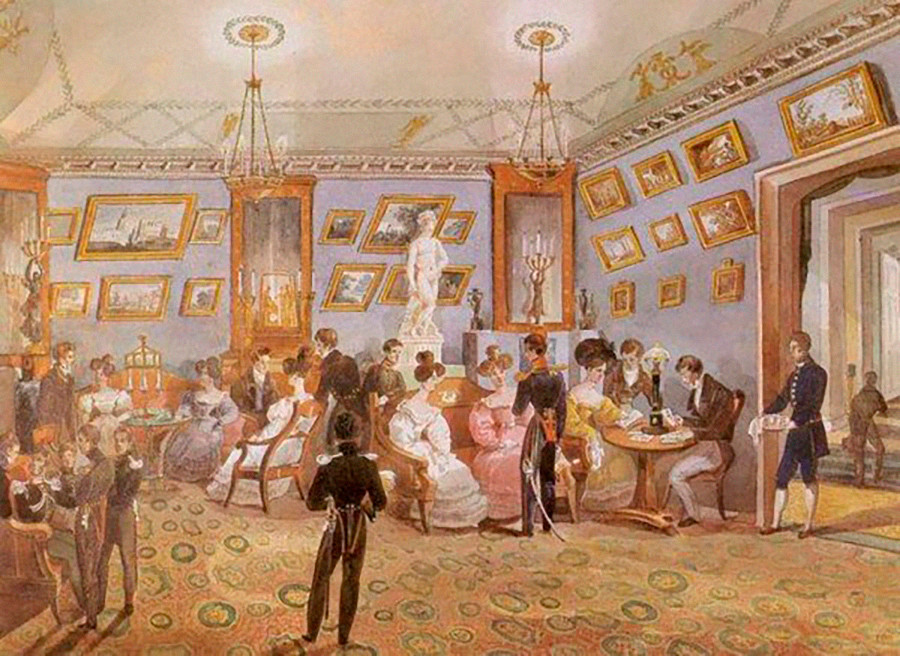 Since the 17th century, card games have captured the minds of Russian nobles for several centuries. It penetrated Russian literature, folklore, noble leisure activities and entertained many famous historical figures, such as Russian writers and poets, played cards.

Card game terminology was widely used in 19th century literature, for example, in Alexander Pushkin’s, The Queen of Spades. The poet himself played cards that it’s been confirmed on more than one occasion by his friends in notes and drafts. “Pushkin once told me rightly so, that passion for the game is the strongest of passions,” wrote Aleksey Vulf, a close friend of Pushkin’s, in his diary.