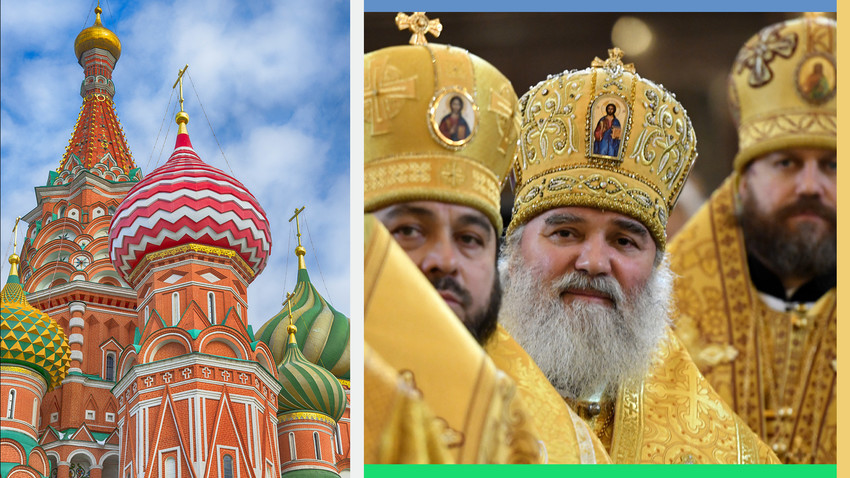 Sergey Pyatakov/Sputnik; Legion Media
Domes, church walls, bishop’s robes – all of these have different colors and they are not incidental. 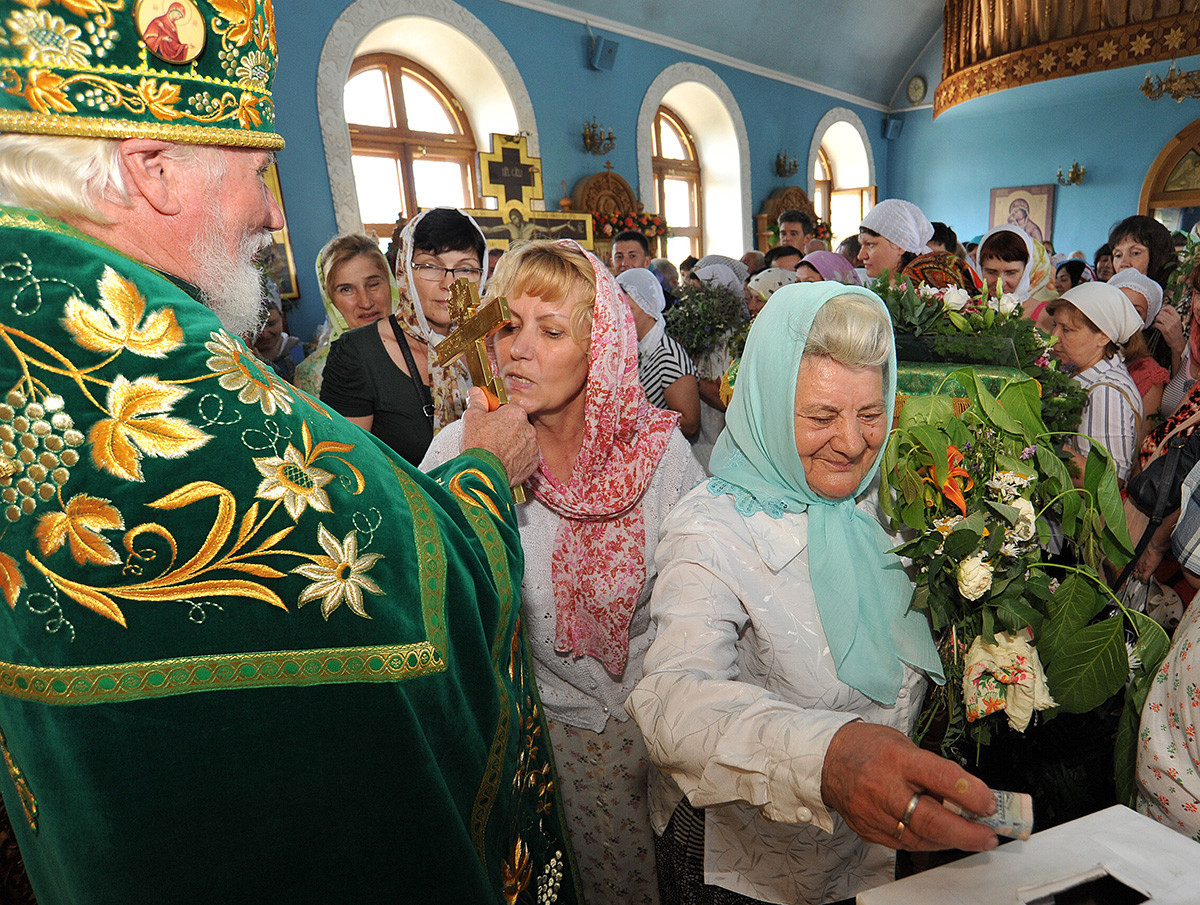 Inside the Holy Trinity Church at St. Iversky Convent, Rostov-on-Don.

The color of eternal life in Russian Orthodoxy, green, is also associated with the Holy Spirit. When the holiday of Pentecost (in Russian Orthodox tradition, the Holy Trinity holiday) is celebrated on the 50th day after Easter, priests wear green robes and the churches are decorated with green branches and leaves. Also, the Patriarch’s mantle is traditionally green. 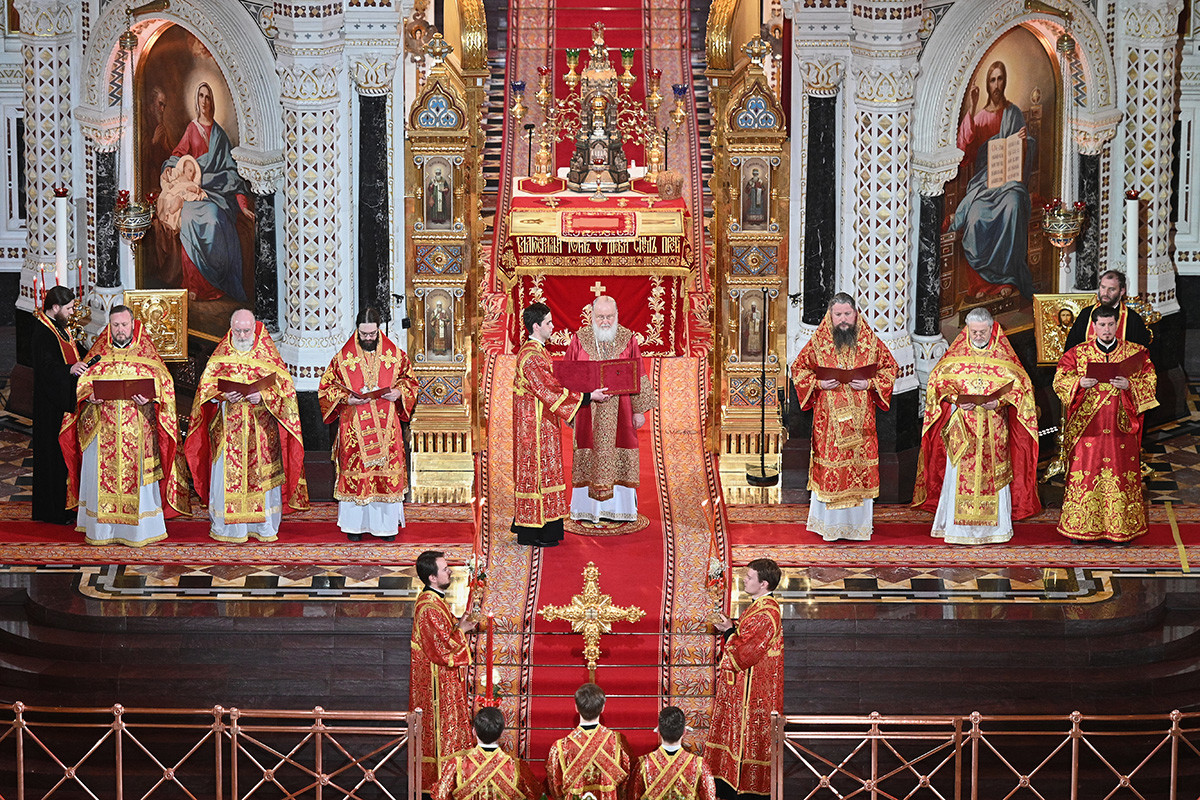 Red is the color of fire – and symbolizes the burning bush, from which God spoke to Moses on Mount Horeb. So, red is also associated with God the Father.

Red is the color of Christ’s blood and is also associated with Easter – the Resurrection of Christ. But also, the Bible says, the Romans dressed Christ in red robes before commencing the execution, to show that he was the King of the Judeans. So, red, being the royal color, is also attributed to the events of Christ’s execution and resurrection in general. 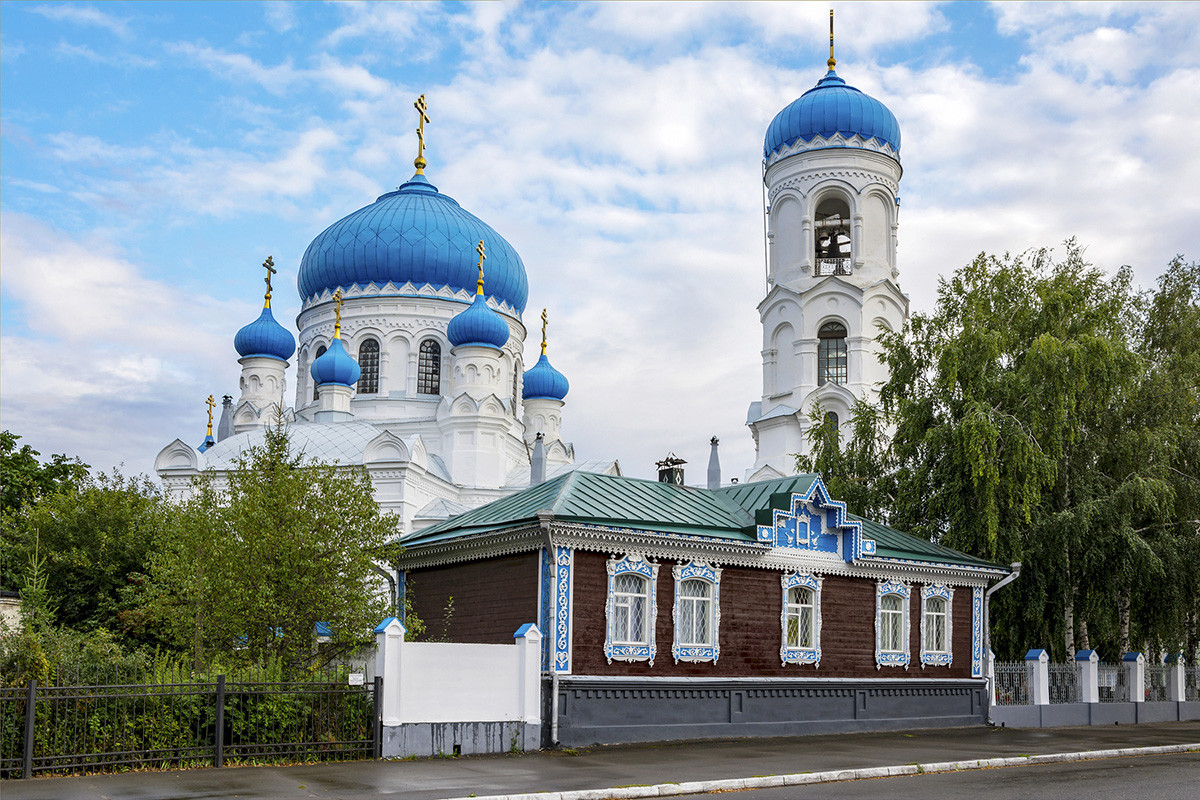 Biysk, the Assumption Cathedral of the Blessed Virgin Mary

Blue symbolizes Heaven and the combination of blue and white are the colors of the Mother of God. Jesus Christ and the saints are often depicted in blue robes, as they are habitants of Heaven. 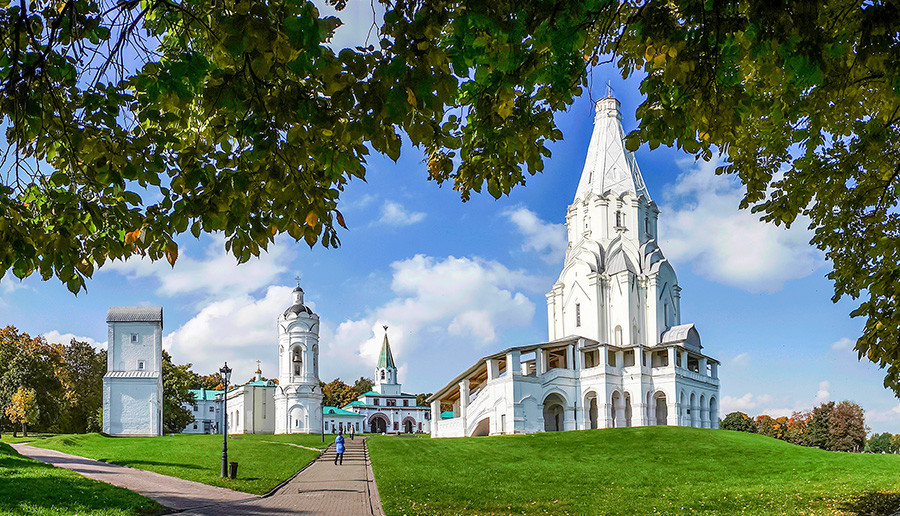 The Church of Ascension, Kolomenskoe, Moscow

In the Old Testament, white is the color of God himself: “His head and his hairs were white like wool, as white as snow; and his eyes were as a flame of fire.” White meant luminosity, a kinship with the divine light. 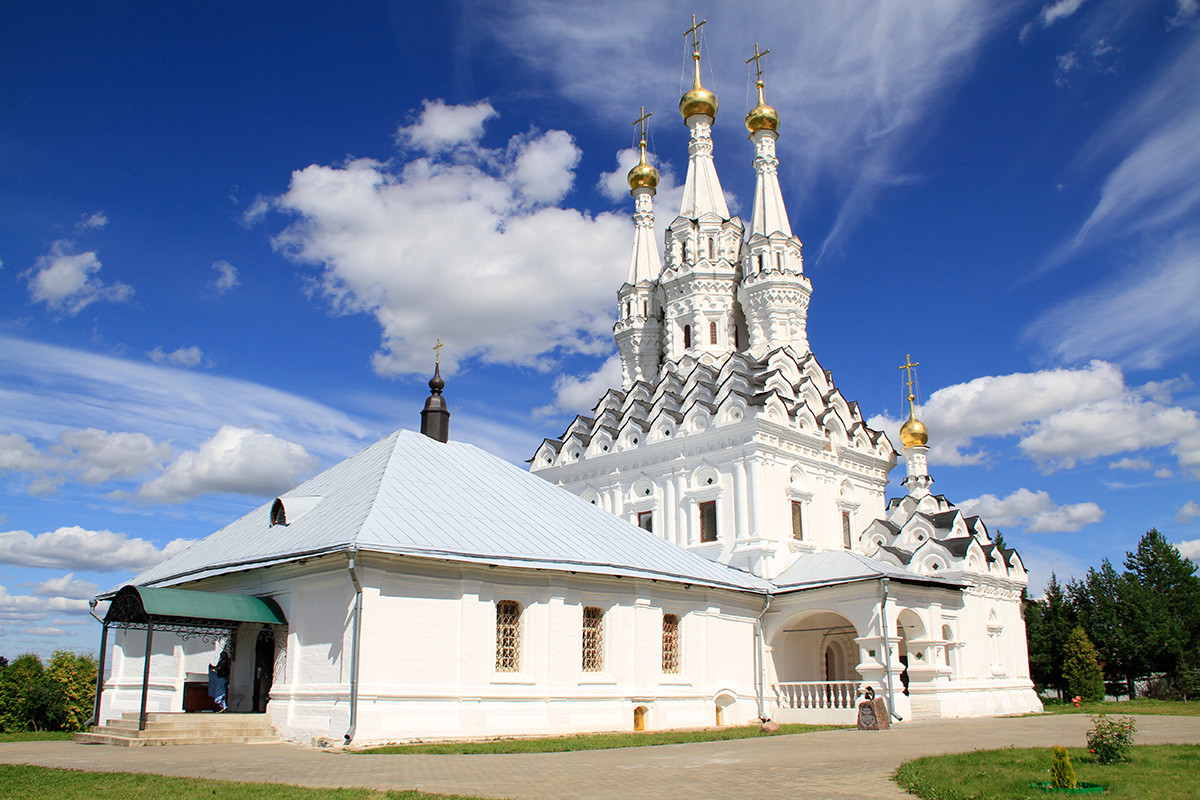 The walls of the Church of Ascension in Kolomenskoe, the earliest stone church with a tented roof and of the Hodegetria Church in Vyazma are entirely white, which amplifies their idea of purity. 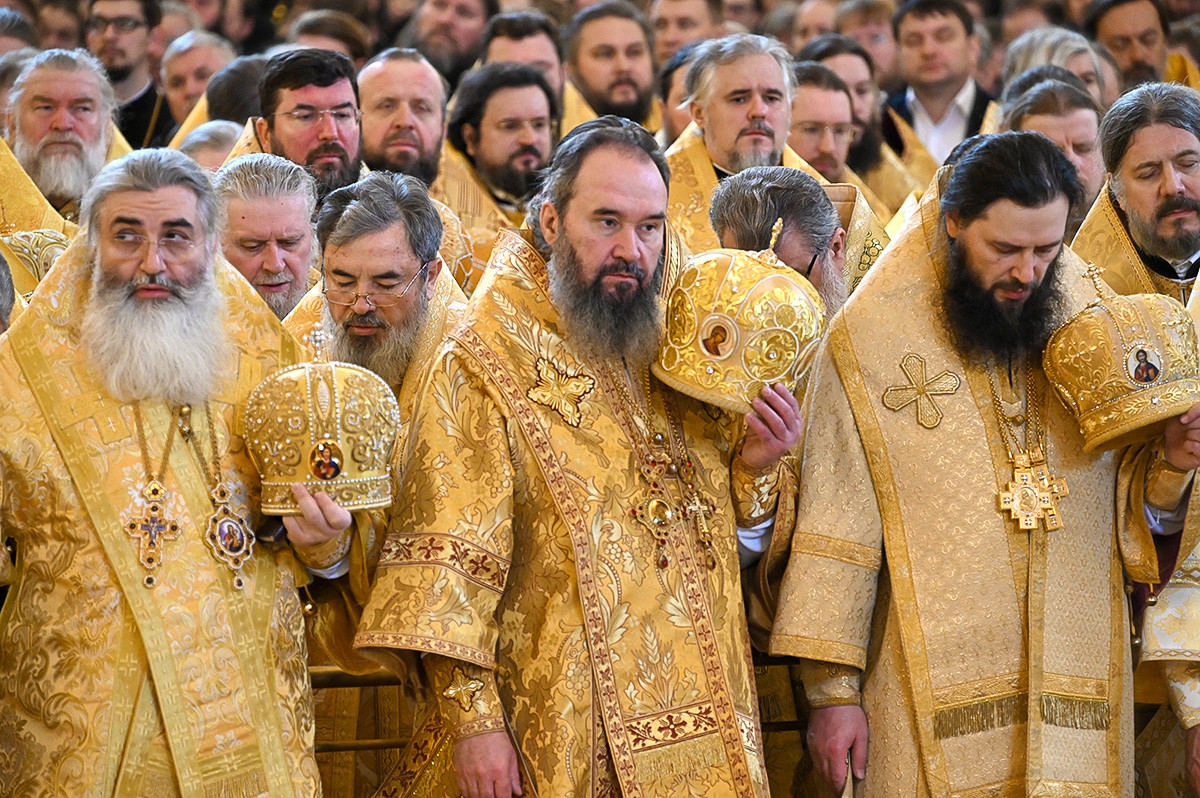 The color of glory and dignity, yellow is not associated with gold or money in Russian Orthodoxy. It is the symbol of warmth and God’s love. Although in 12th-13th centuries in Europe, yellow became associated with the betrayal of Christ by Judas and Judas was traditionally painted wearing yellow robes, in Russian Orthodoxy this association didn’t exist. Gold vestments are used by Orthodox priests during Sunday services, as well as on most days of the year, unless someone is commemorated in church. If a church has gold-tinted domes, it is a church consecrated in honor of Christ, or in honor of one of the 12 Great feasts in the Eastern Orthodox Church. 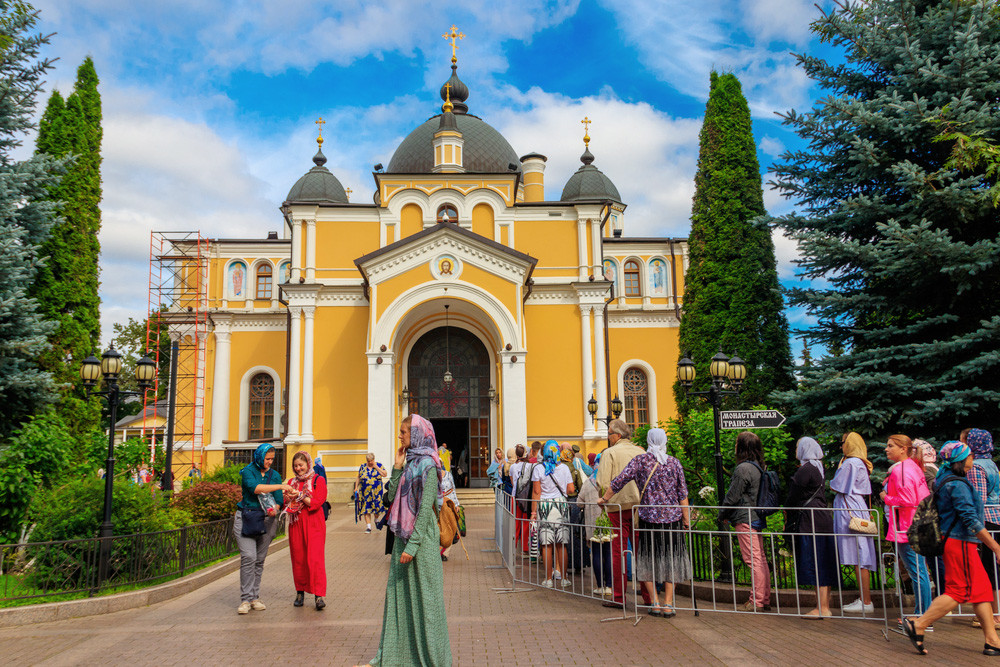 The church at Pokrovsky Monastery, Moscow

Apart from being a universal mourning color, black in Russian Orthodoxy is associated with monasticism. After being tonsured as a monk, a person shuns the worldly delights and so, “dies” for the secular world. Black domes usually appear on churches built in monasteries. Also, black is the color of the robes of bishops, archbishops, metropolitans and patriarchs during the Orthodox Lent. In the modern Russian Orthodox Church, there is a tendency to abandon the use of black and replace it with dark purple.