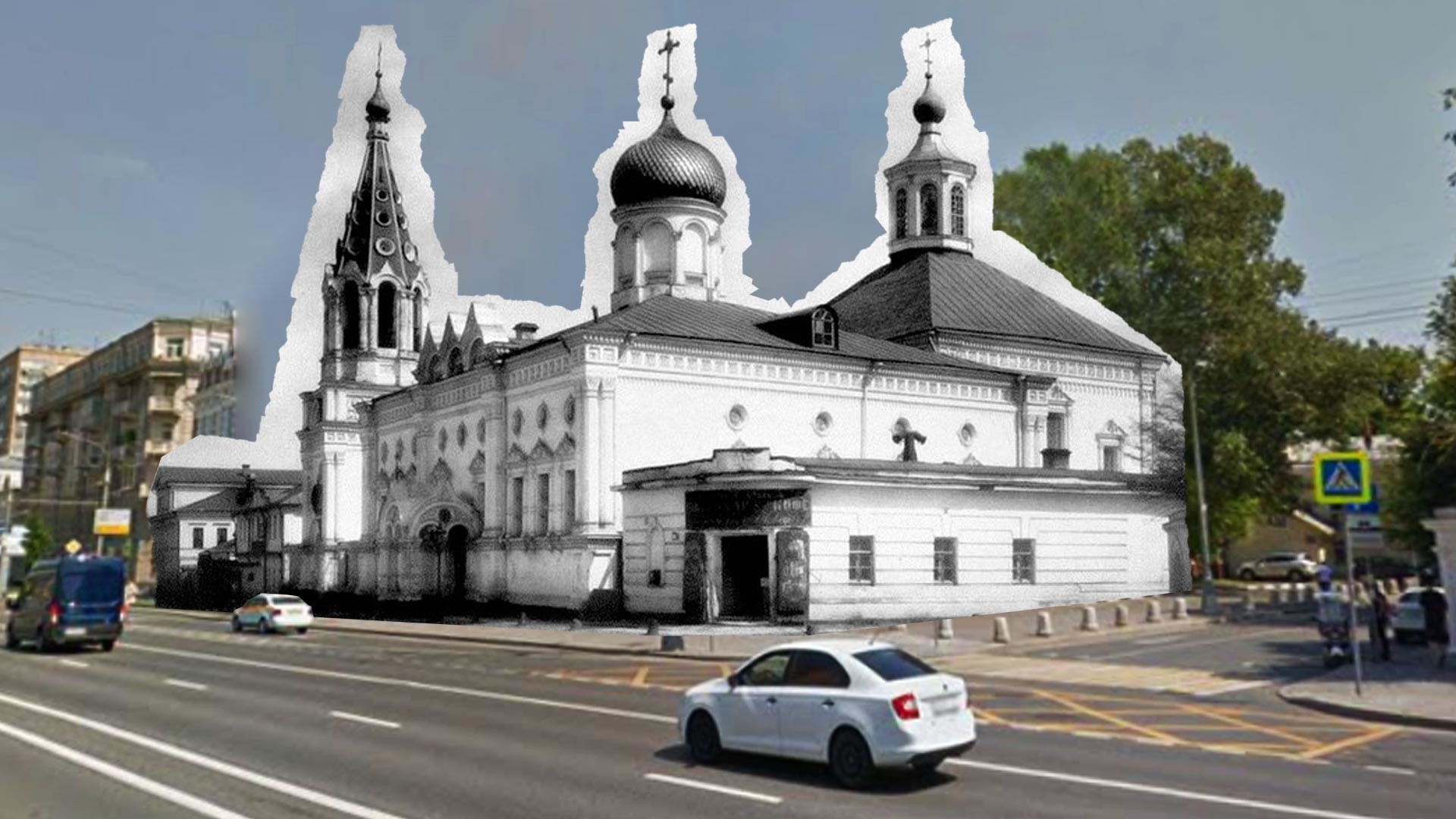 Church of Peter and Paul in Yakimanka

Nikolai Naidenov; Google maps
Moscow's Cathedral of Christ the Savior, which was demolished in Soviet times, was rebuilt in the 1990s. However, the list of churches “irretrievably lost” under the Soviet rule contains hundreds more names. Here are some of them.

Soviet authorities waged an aggressive campaign against religion, and after the Civil War was over, they began to demolish churches across the country on a massive scale. After the “first wave” in the 1920s, another large-scale demolition campaign awaited Moscow in the 1930s, when Joseph Stalin signed the master plan for the reconstruction of Moscow. (Click here to read more about what the Soviets did with remaining churches.) Here are some of the most striking Moscow churches from different centuries. 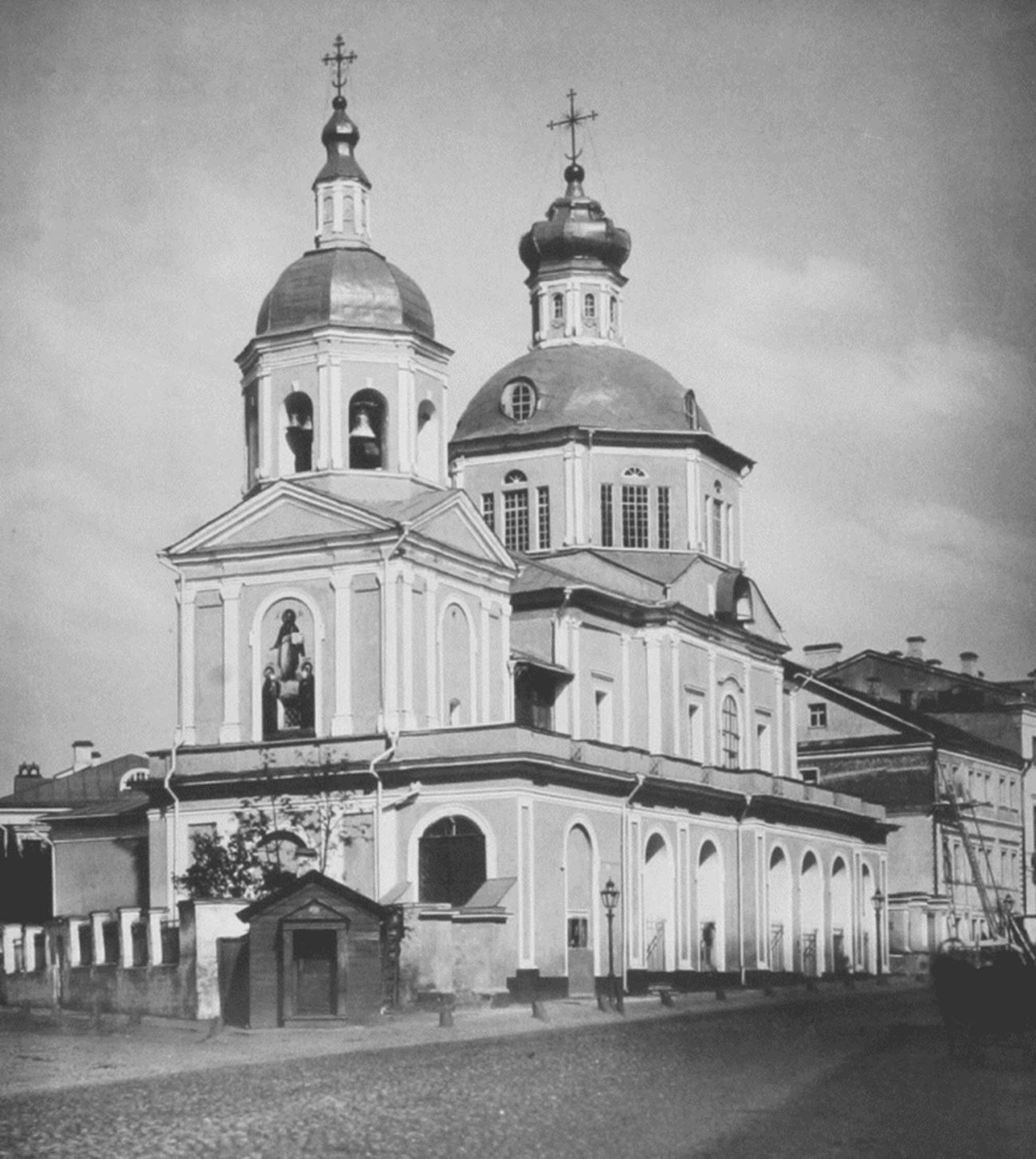 This church dedicated to the early Christian saint was built in Myasnitskaya Street in the mid-18th century. It became famous as the only church that did not stop holding services even when Napoleon's troops invaded Moscow in 1812.

It was demolished in the "first wave" in 1926 under the pretext of building a Palace of Trusts, which - like the Palace of Soviets that was supposed to be built on the site of the Christ the Savior Cathedral - was never built. Today the site where this church once stood is occupied by a building belonging to the Higher School of Economics.

2. Church of the Assumption of the Blessed Virgin Mary in Pokrovka 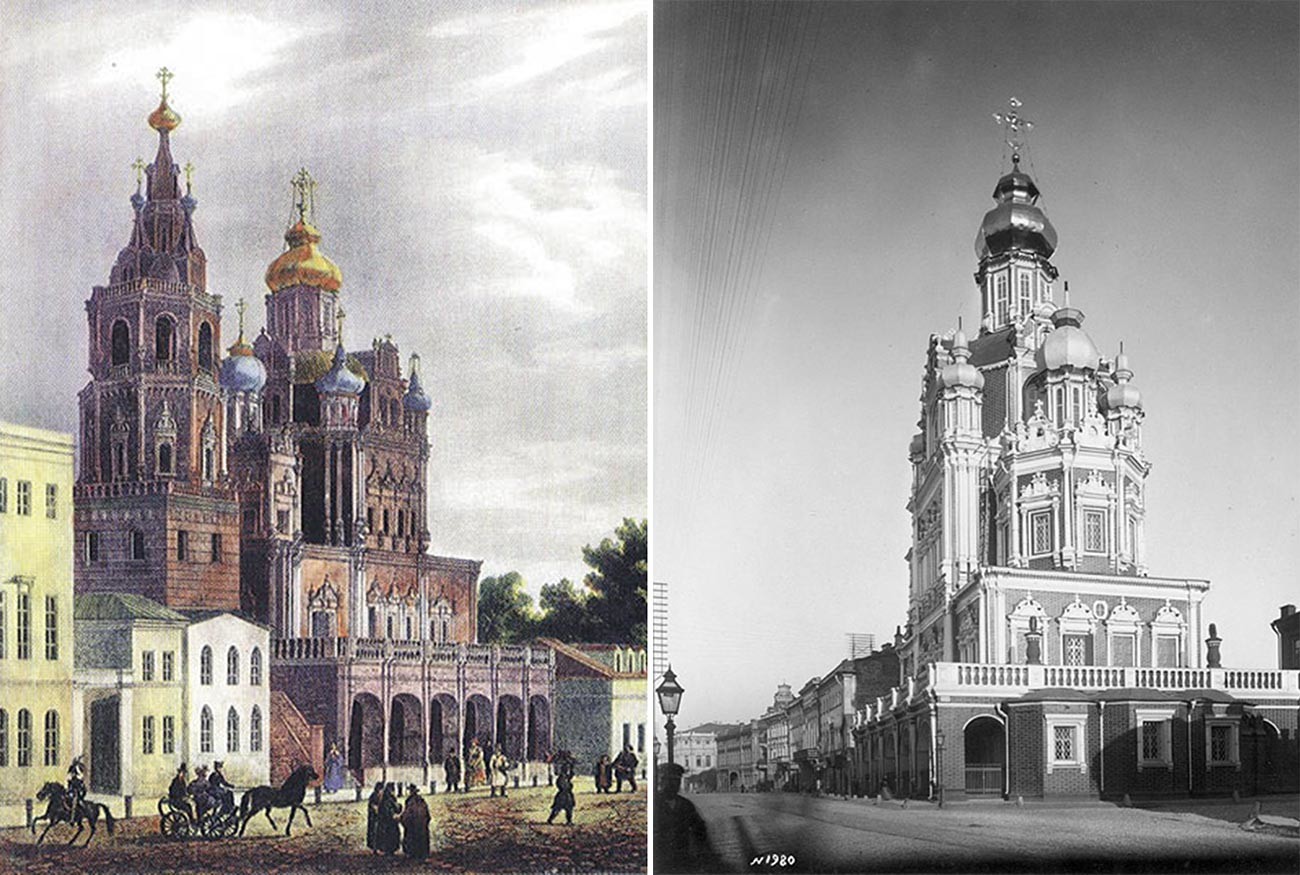 This incredibly beautiful Baroque church was built 1696-1699. It was Fyodor Dostoevsky's favorite church in Moscow, while the famous academician, Dmitry Likhachov, described it as “a frozen cloud of white and red lace”.

To widen the road in Pokrovka, in 1936 the Moscow authorities decided to demolish this monument of Russian architecture, despite the fact that many architects and art conservators campaigned to preserve it. There is now a restaurant in its place.

3. Church of St. Nicholas the Wonderworker in Stolpy 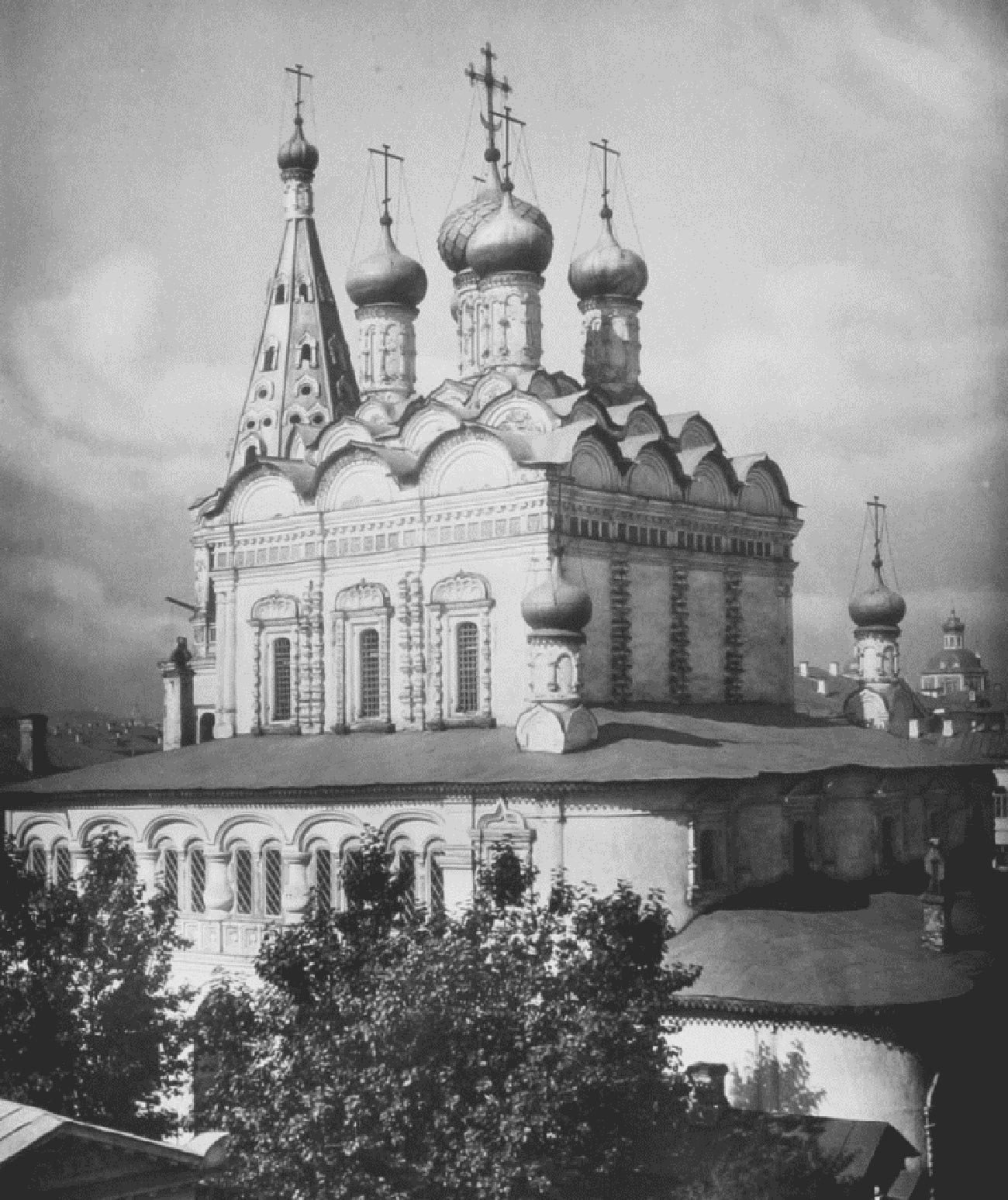 Church of St. Nicholas the Wonderworker

One of the oldest stone churches in Moscow was built in 1669 in Armyansky Pereulok. Its tent-roofed bell tower and multi-tiered gables were a characteristic example of 17th century architecture.

The church was demolished in 1938, although architects managed to preserve several of its decorative elements - they are now incorporated into the wall of the Donskoy Monastery along with the surviving fragments of some other demolished buildings. Its place is now taken by a teacher training college.

4. Church of Boris and Gleb in Povarskaya 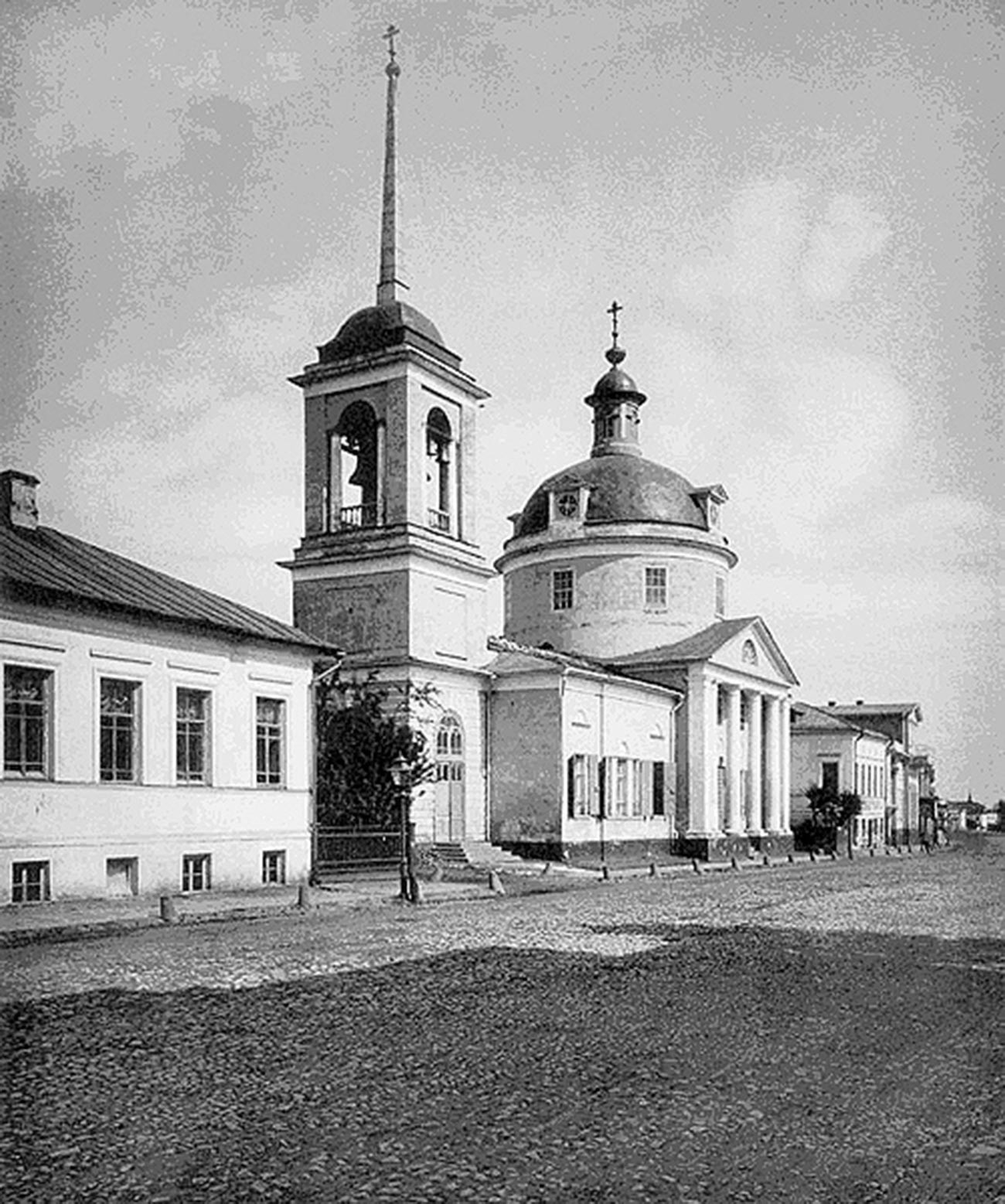 Church of Boris and Gleb

This neoclassical church was built in the early 19th century. It had a rotunda and a portico, which were quite rare for the architecture of Moscow churches. Scholars believe that the stone church was erected on the site of a wooden one, built at the behest of Tsar Boris Godunov in the 17th century.

It was knocked down in the mid-1930s, and in 1946, one of the buildings of the Gnessin Russian Academy of Music was built in its place.

5. Church of Florus and Laurus at the Myasnitsky Gate 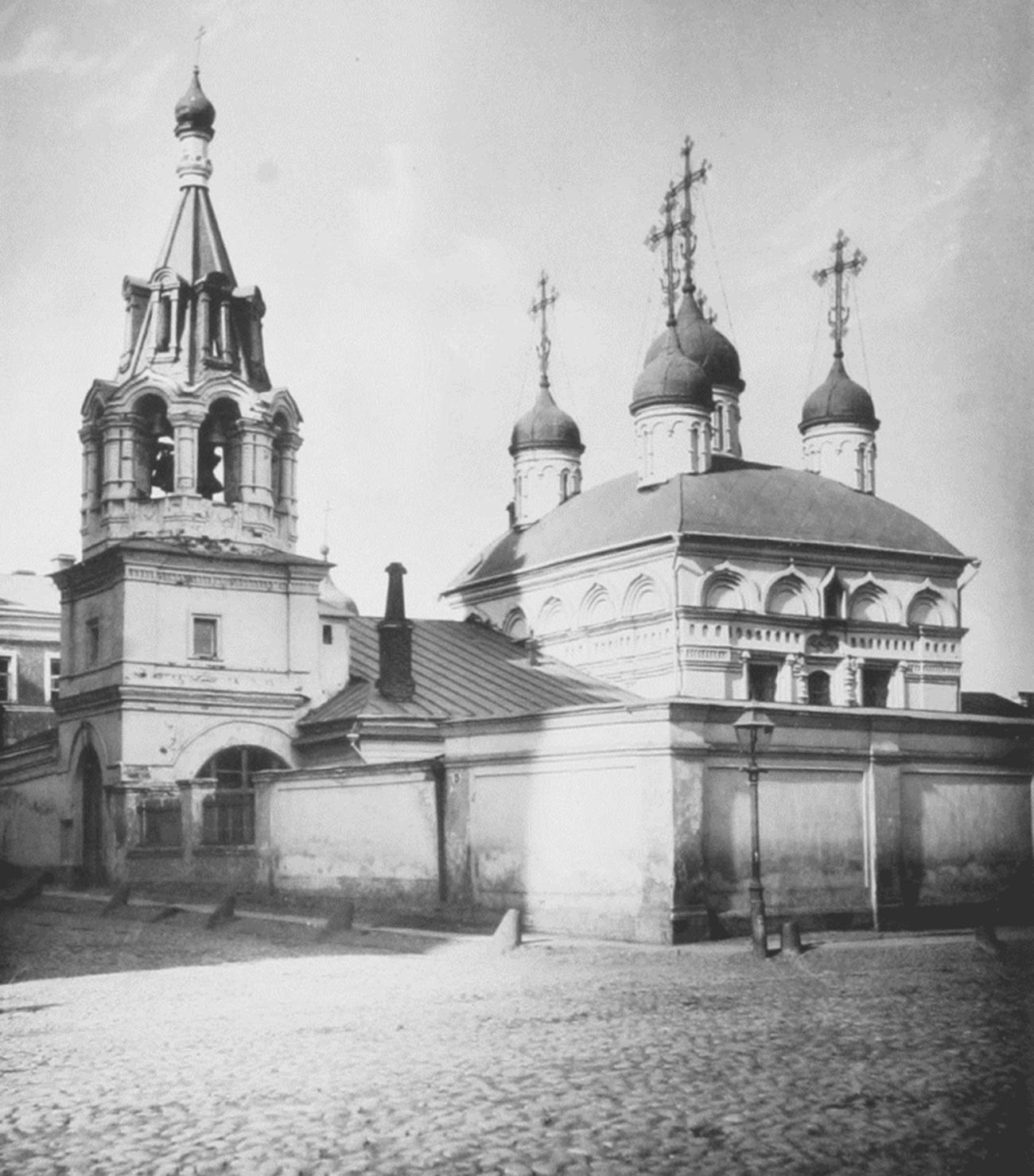 Church of Florus and Laurus

This small church was built in the 17th century in Myasnitskaya Sloboda, where butchers serving the royal court lived. It was depicted in the painting by Apollinary Vasnetsov "At the Myasnitsky Gate of the White City in the 17th century". The canvas was painted in 1926 - the artist knew the church well. 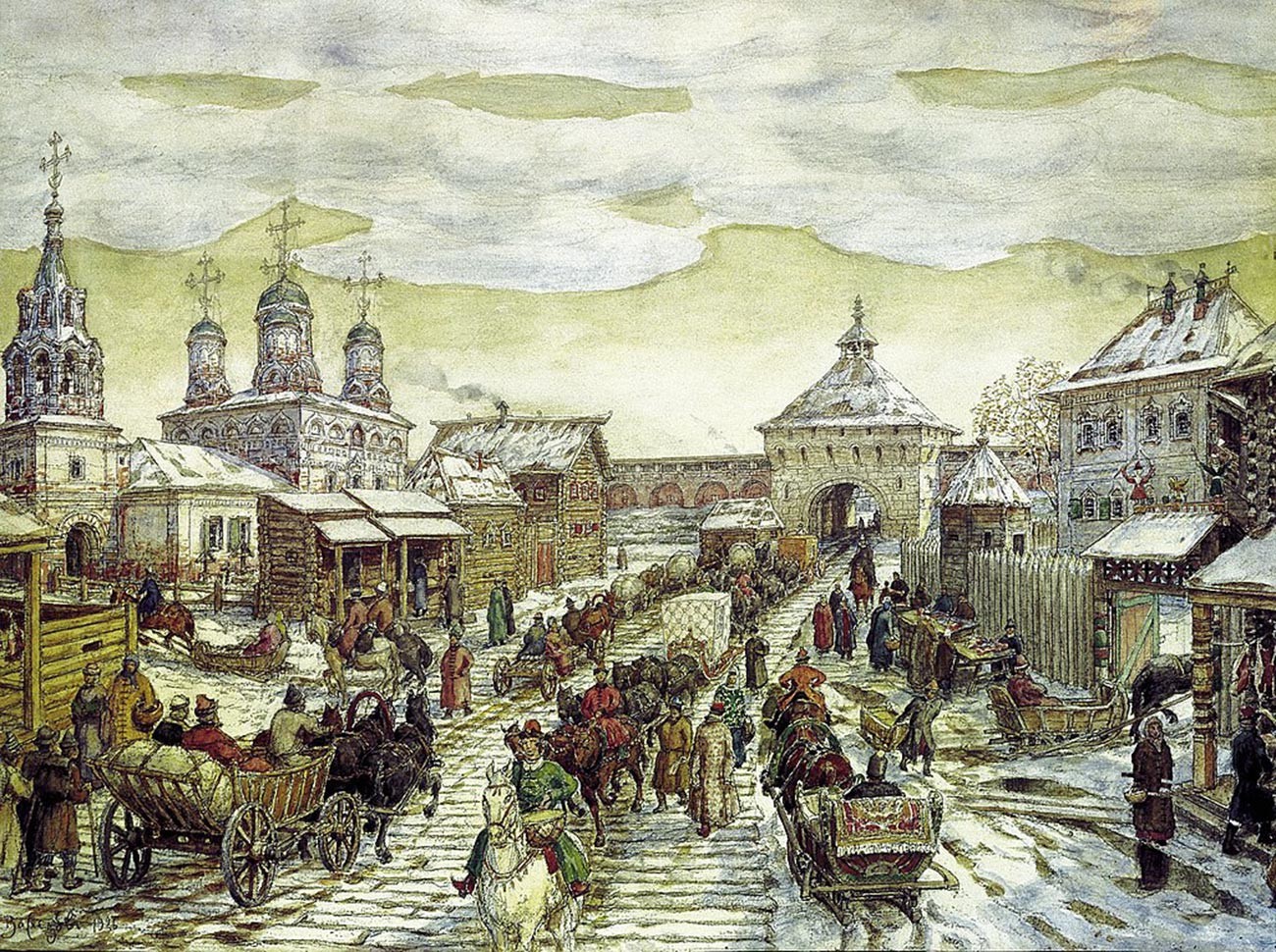 Apollinary Vasnetsov. At the Myasnitsky Gate of the White City in the 17th century

In the 1930s, the church was first handed over to Metrostroy, the company that built the Moscow Underground. It was subsequently demolished and one of the entrances to the Chistye Prudy metro station was built in its place. 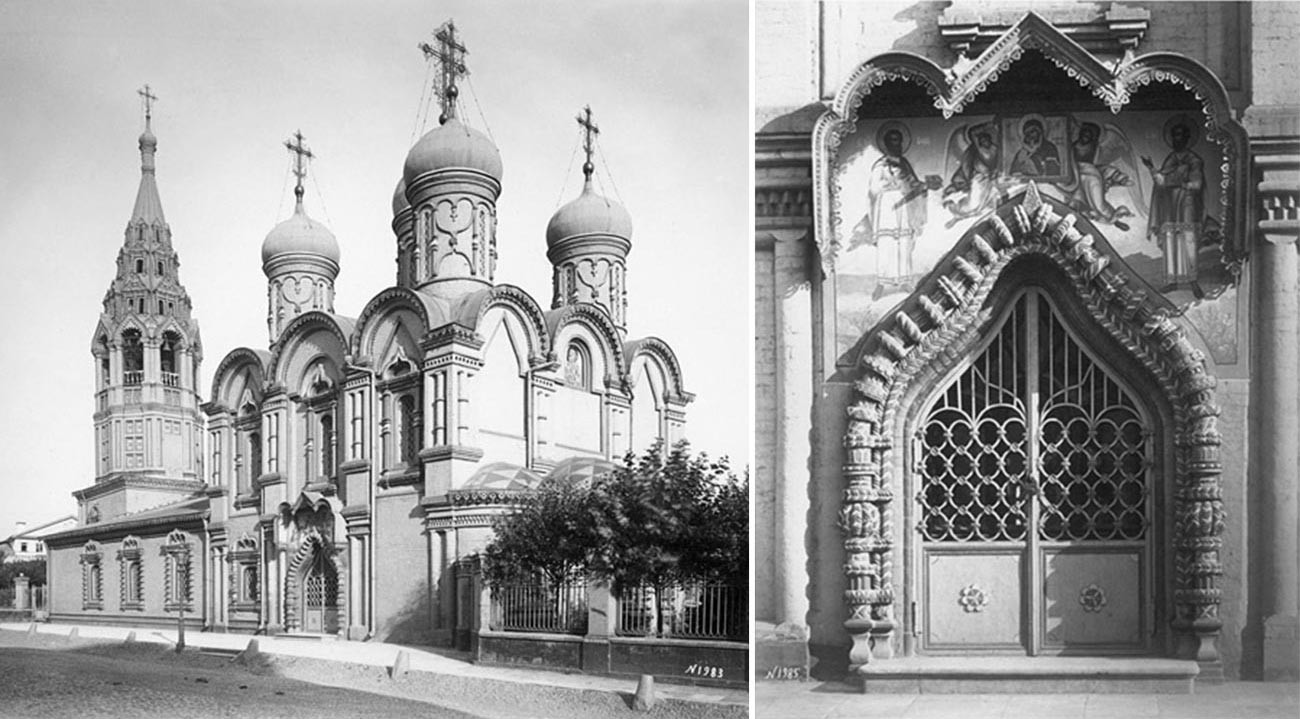 Church of Cosmas and Damian

The Nizhniye Sadovniki area on the banks of the Moskva River was where gardeners who worked in the Tsar's vast gardens lived. In 1657, an ornamental church was built here, with a bell tower added later.

In the 1920s, the church was plundered and many of its utensils and precious icon frames were removed, and in 1938, it was demolished. These days, there is a residential building in its place. 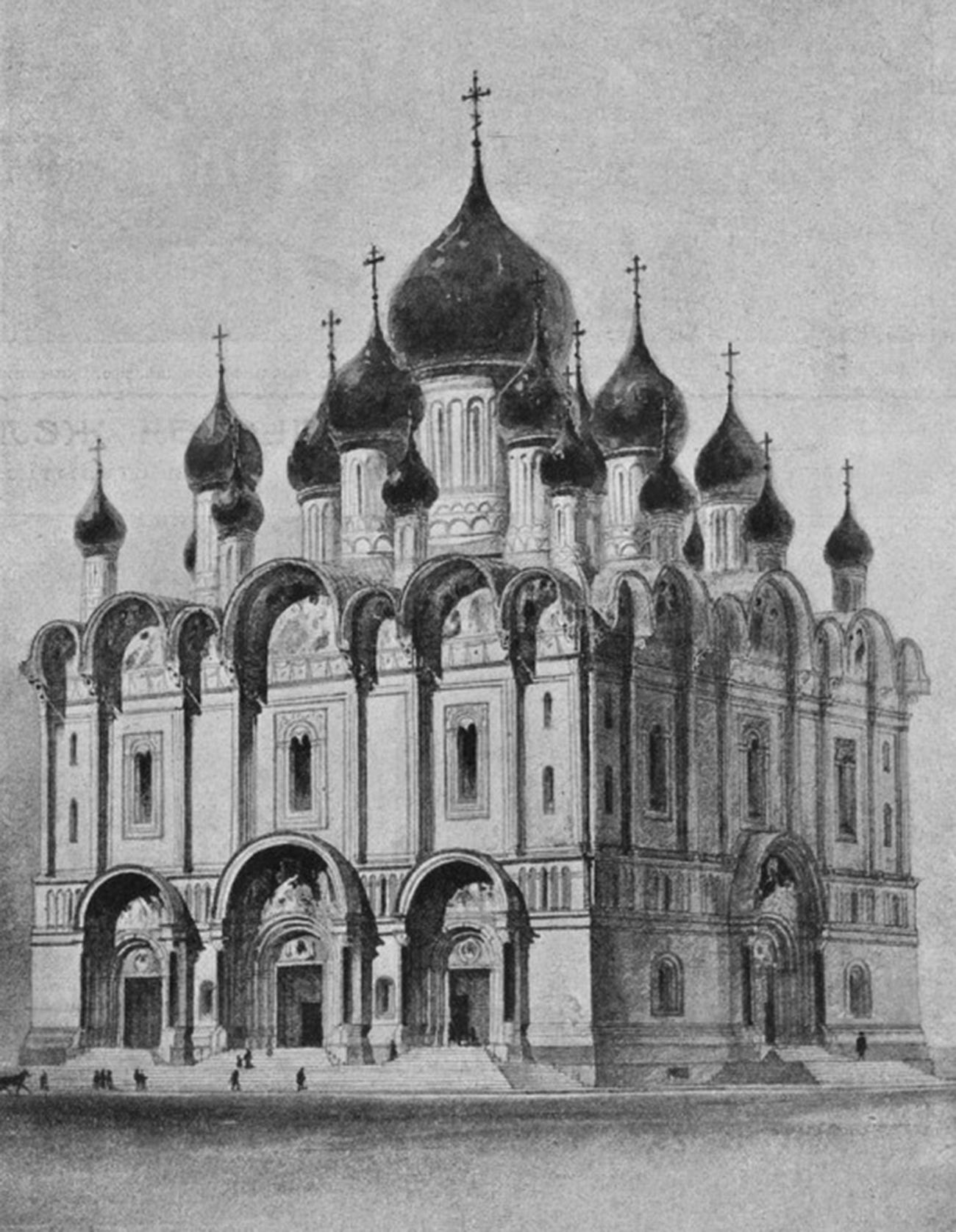 Alexander Nevsky Cathedral pictured in 1904 under the project of architec A. Pomerantsev

This cathedral in Miusskaya Square to the north of the city center was the second largest in Moscow after the Cathedral of Christ the Savior. Its construction began in the 1910s, however, because of the First World War and then the revolution, it was never completed.

The Soviet authorities thought of using its building as a crematorium or dismantling for salvage, but the cathedral remained abandoned until the 1950s. In the end, it was demolished. There is now a monument to the Soviet writer Alexander Fadeyev standing on this spot.

8. Church of Peter and Paul in Yakimanka 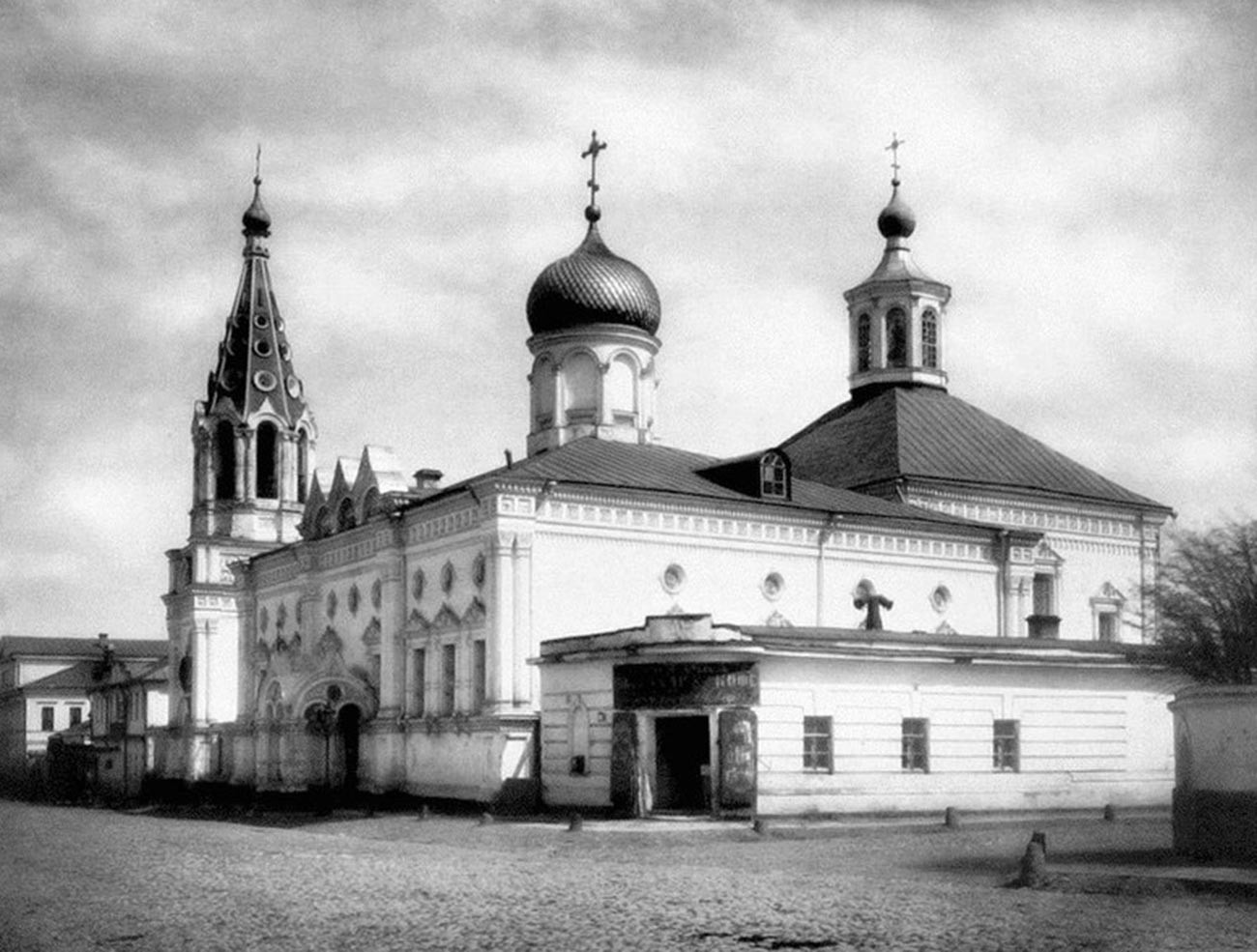 This squat church in central Moscow was built back in 1651, but was later rebuilt several times. Napoleon's army in 1812 used it as a stable. Later, a refectory and a bell tower in the Russian style were built here.

In the 1920s, the church was handed over to the Baptists, and later rebuilt several more times – to be used as living quarters. What remains of the church walls now forms part of the residential building at Bolshaya Yakimanka 31/18. 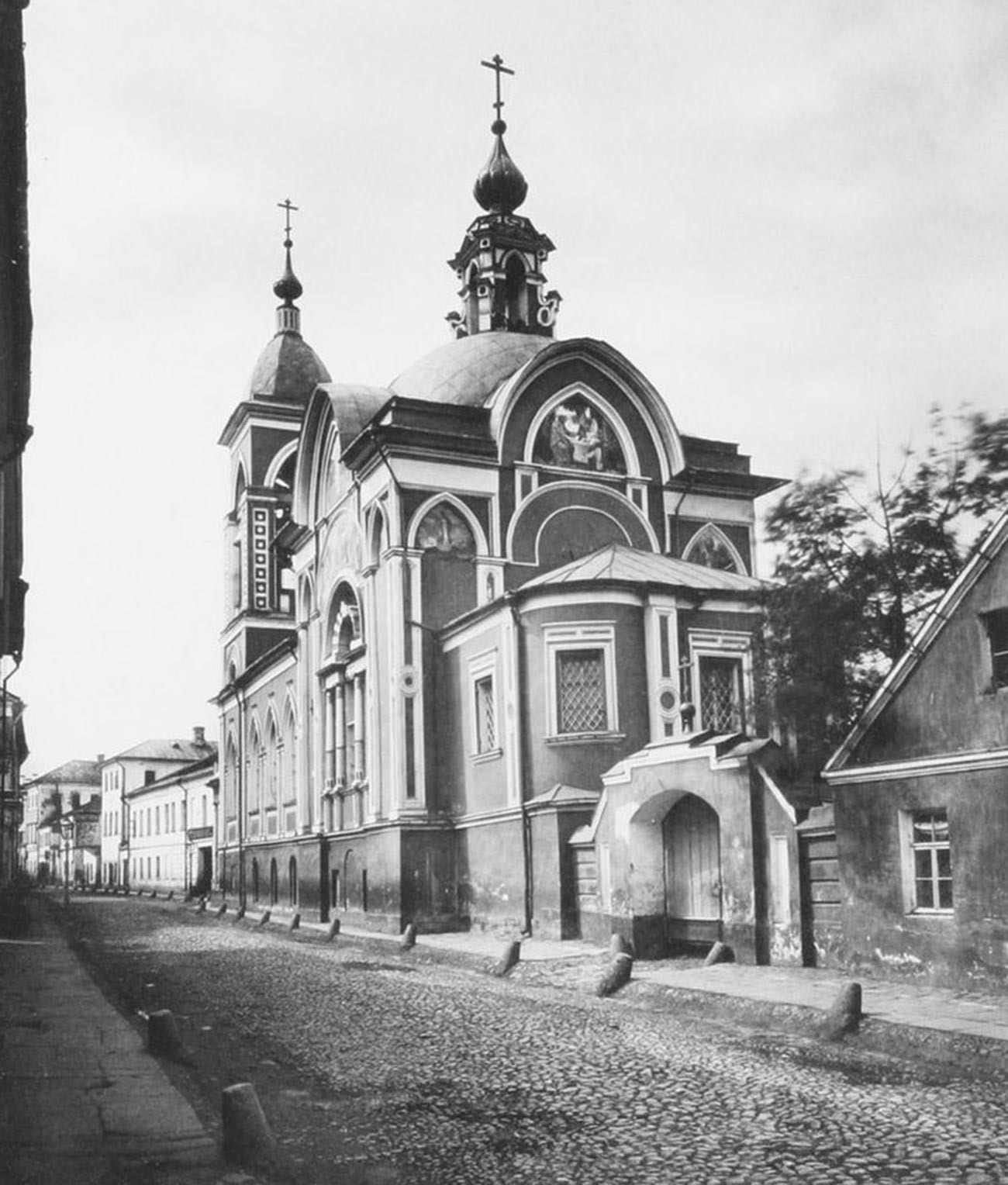 This red-brick church was built in the historical area of Zaryadye near the Kremlin in about 1625. In 1802, it was rebuilt in the Gothic style.

During the 20th century alone, Zaryadye was completely rebuilt several times. In 1932, the church was demolished to free space for a gigantic building of Narkomtyazhprom, the Ministry of Heavy Industry (click here to read more about that project). However, after Stalin's death, that unfinished building was demolished too and the huge Rossiya hotel was built on its site. In 2006, the hotel too was demolished, and now the site is occupied by the recently built Zaryadye Park. 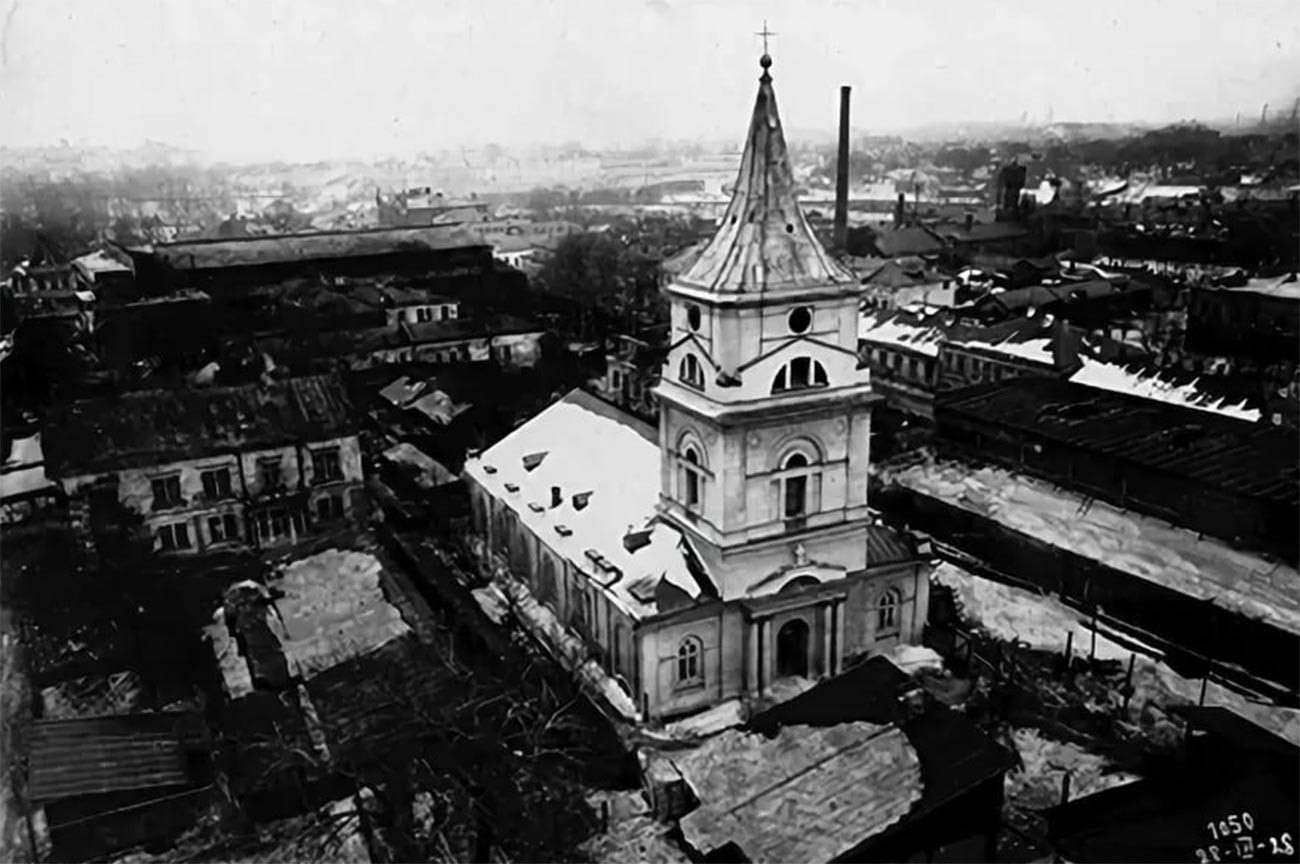 A German Lutheran community first appeared in Moscow back in the 16th century, and this oldest Lutheran church in the city was built in 1764. It preserved its original altar and organ to the very last.

In 1925, an aviation institute located nearby demanded that the church be demolished to free space for it to expand its territory. Despite active protests from numerous members of the parish, in 1928 the authorities ruled to demolish the church.