Culture
Russia Beyond
Many painters in Russia appealed to the historical heritage and investigated the folklife, including the dress of both peasants and noble boyars of Old Russia. 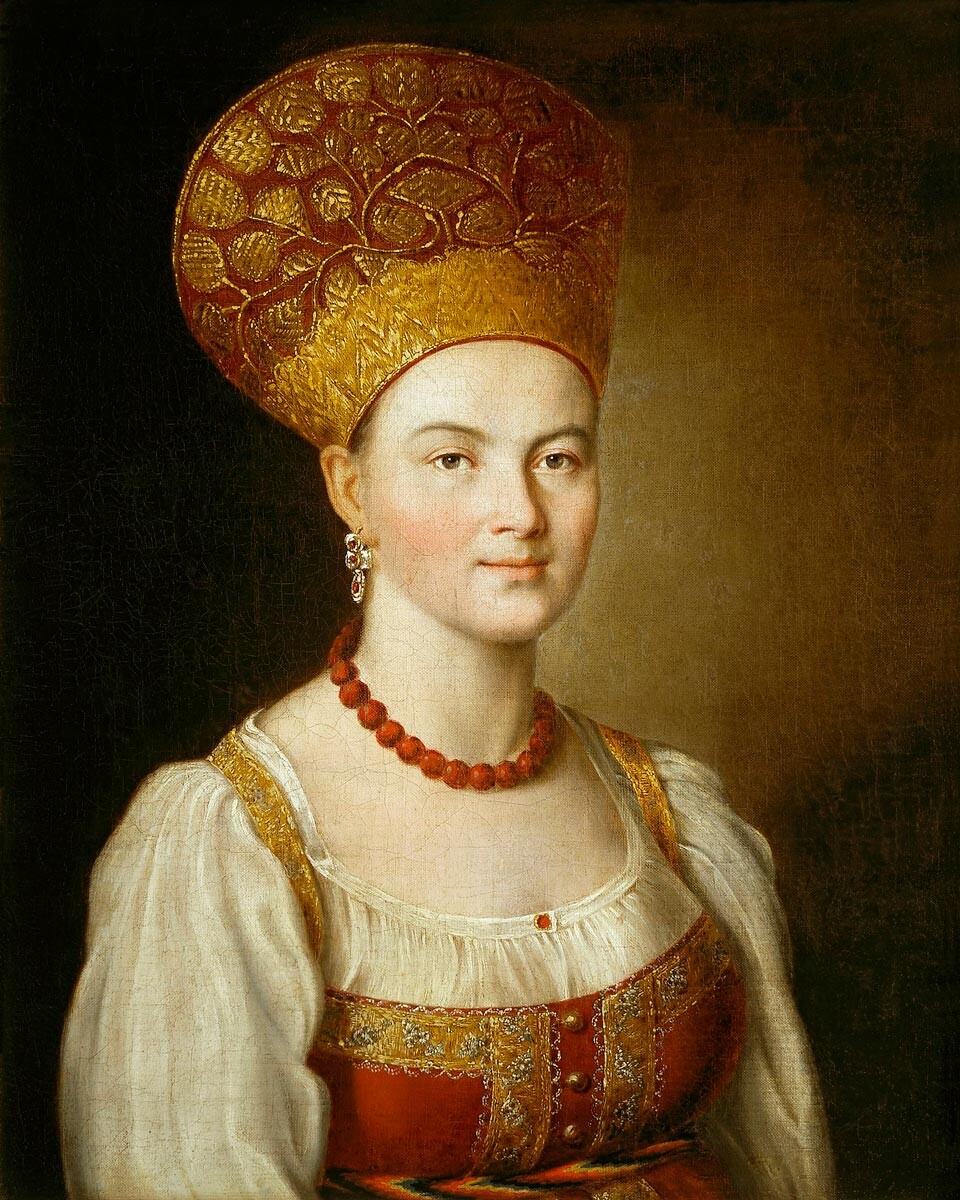 A former serf, the artist Ivan Argunov painted portraits even of the royal family - but he dared to pay tribute to his roots and depict a girl in a folk costume and with such an interesting form of kokoshnik. 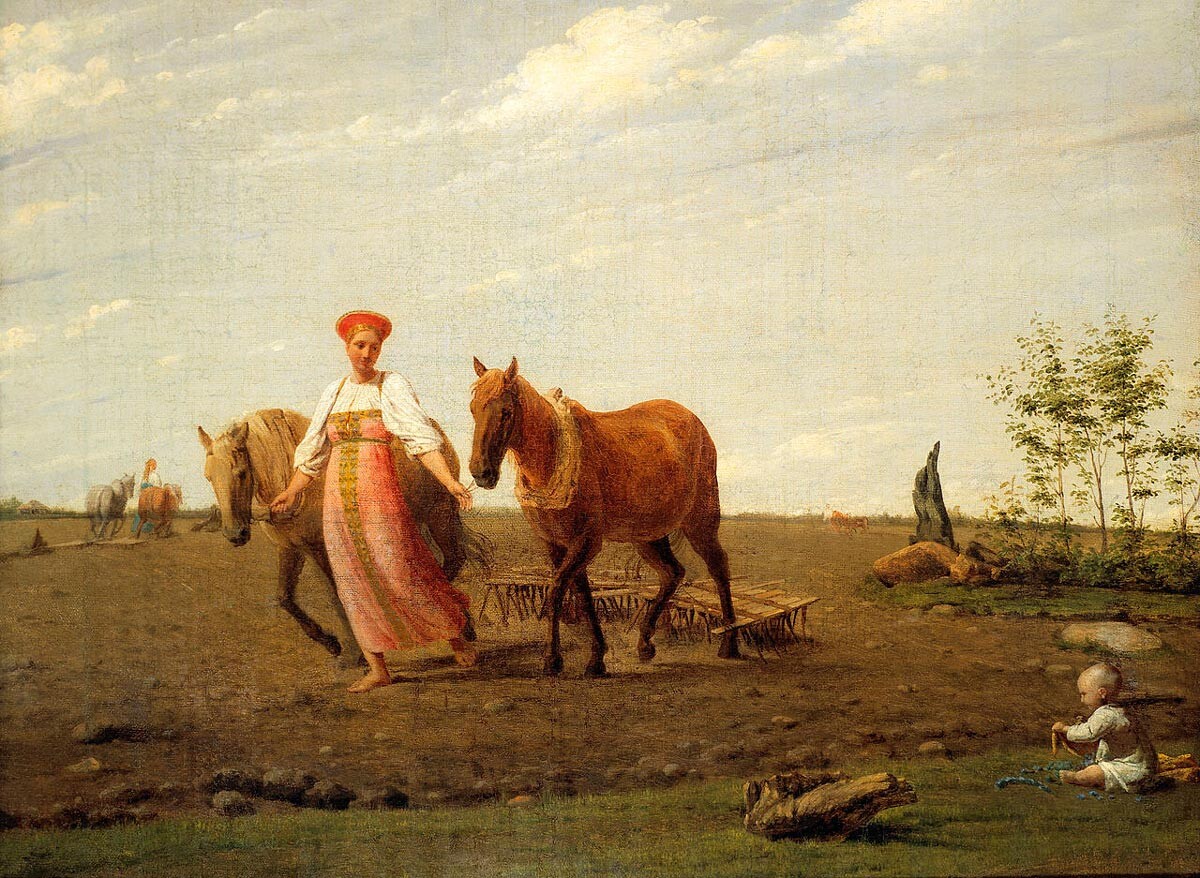 Alexei Venetsianov was one of the first artists to turn to the theme of peasantry in his paintings. His most famous drawing depicts a girl in traditional attire - a shirt and a sarafan with a belt. She wears one of the varieties of kokoshnik on her head. Venetsianov’s girl walks barefoot like an antique goddess, but peasant women would probably walk in their boots in the field. 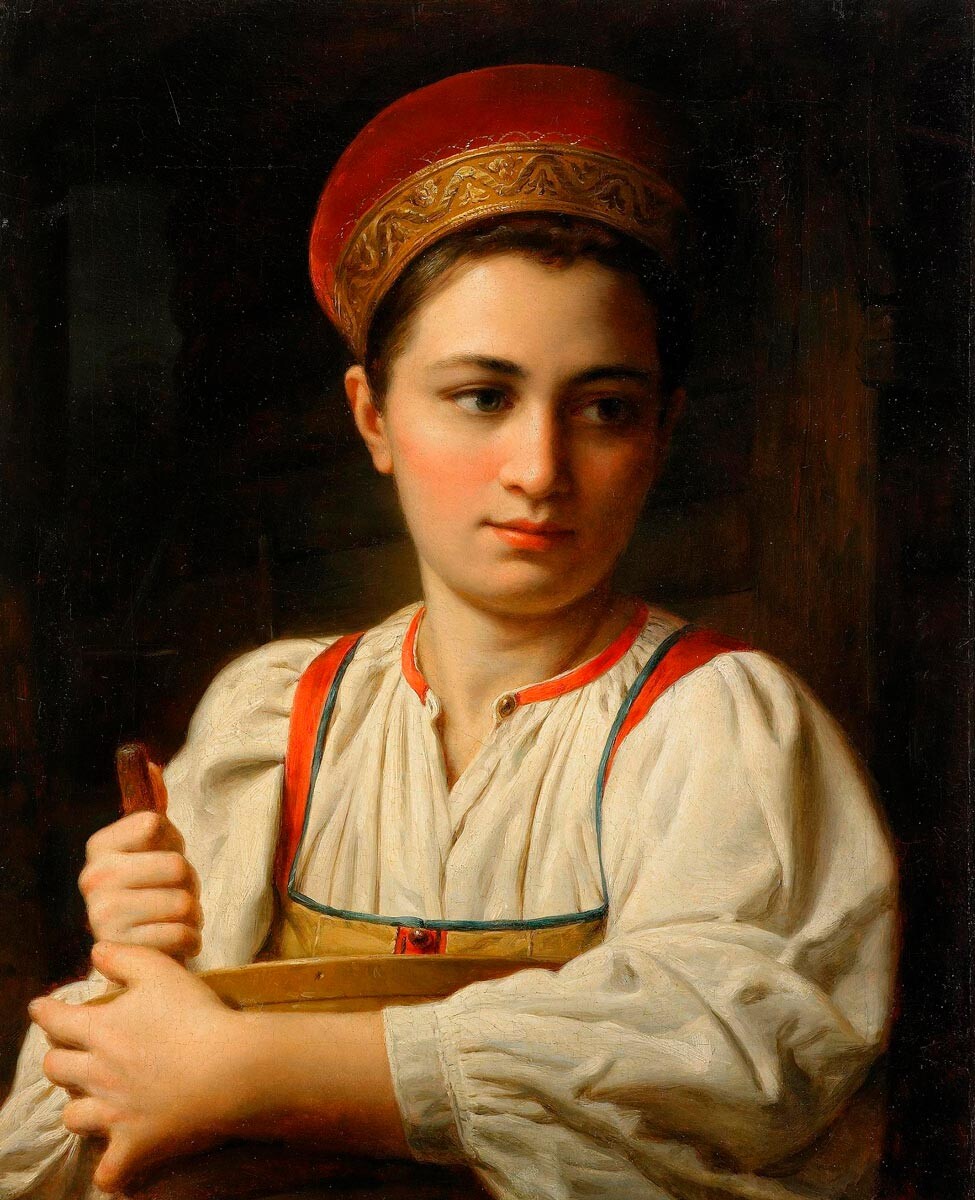 This peasant woman looks as if she were taken from a painting by Venetsianov. She is also wearing a shirt and sarafan, as well as the simplest version of a kokoshnik. 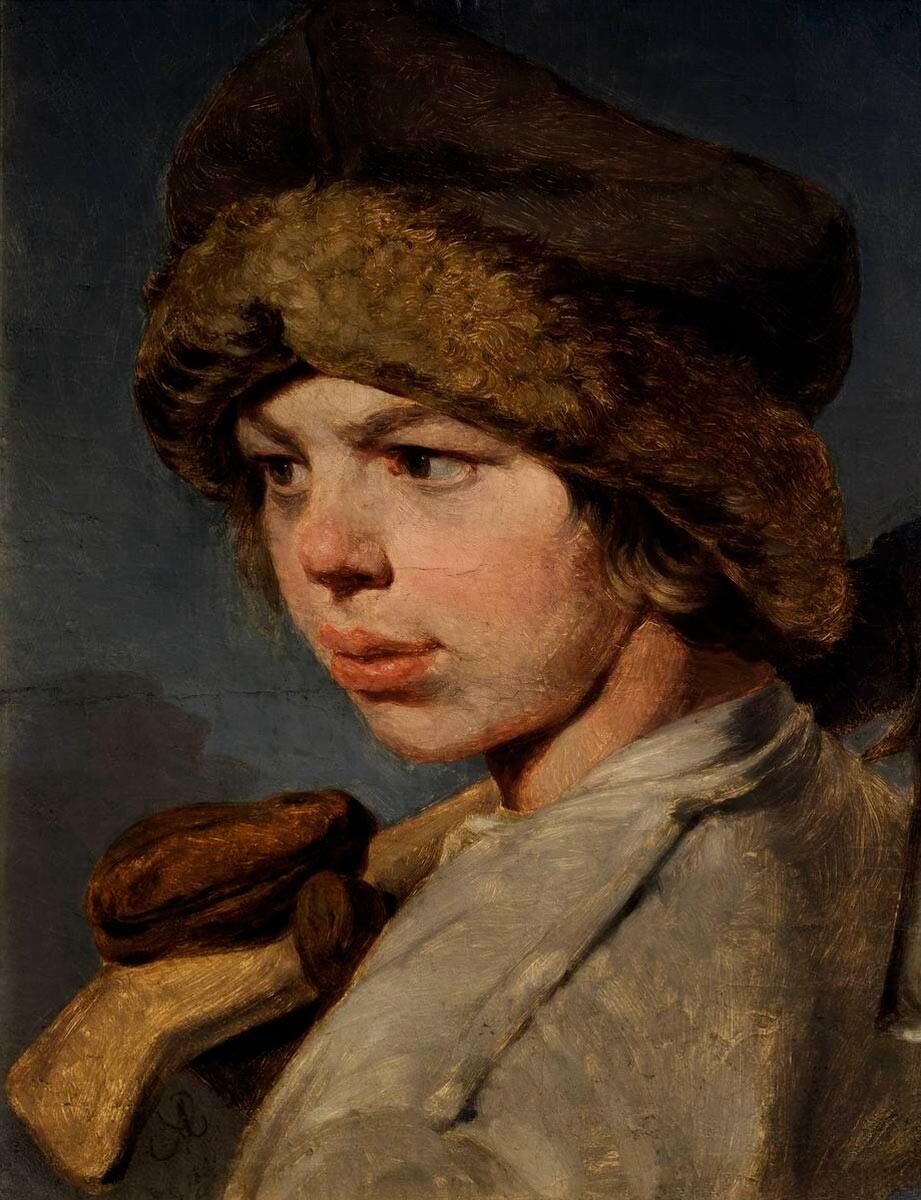 The peasant boy in this painting wears a ‘murmolka’ hat with a fur brim over his head. 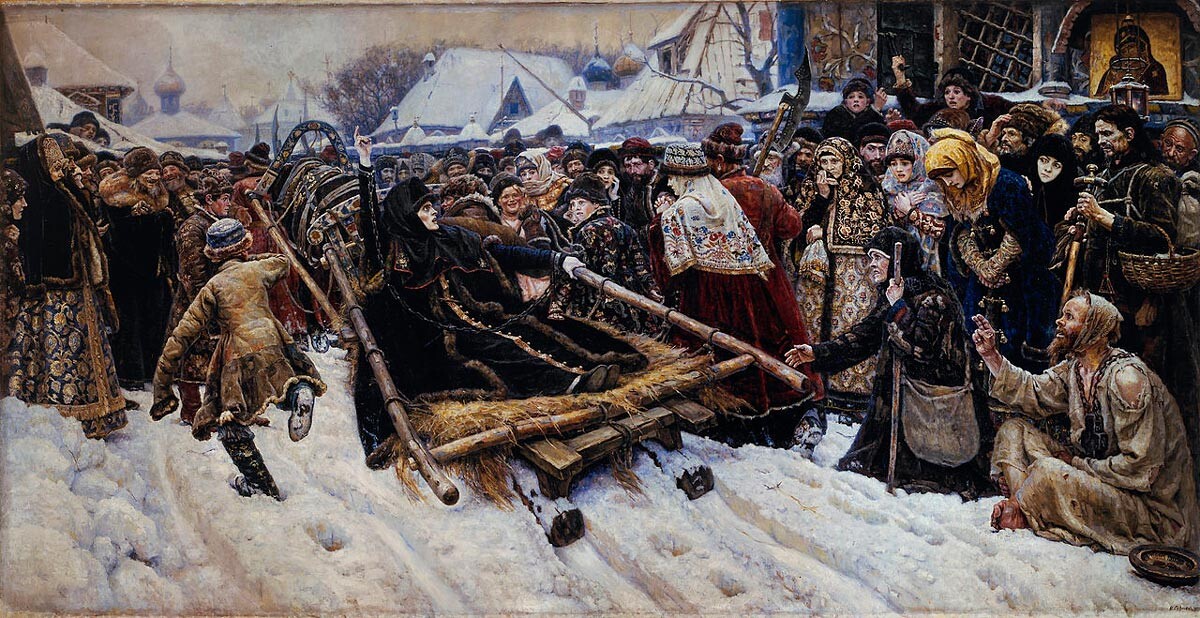 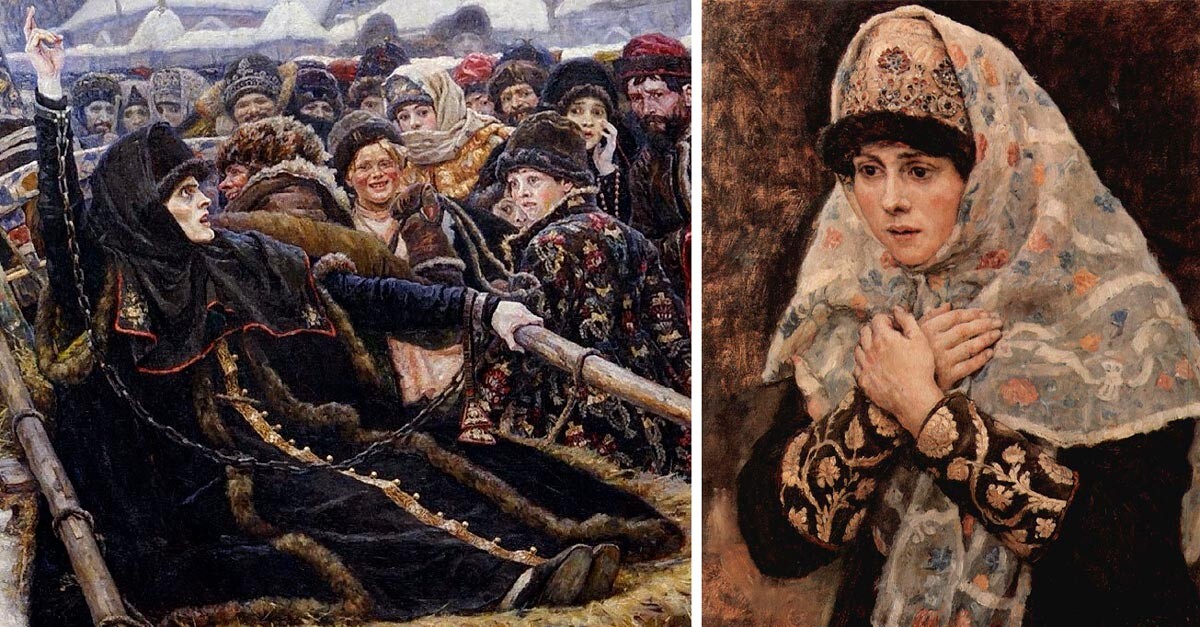 Nikolai Yaroshenko. A Peasant in the Forest, 1880 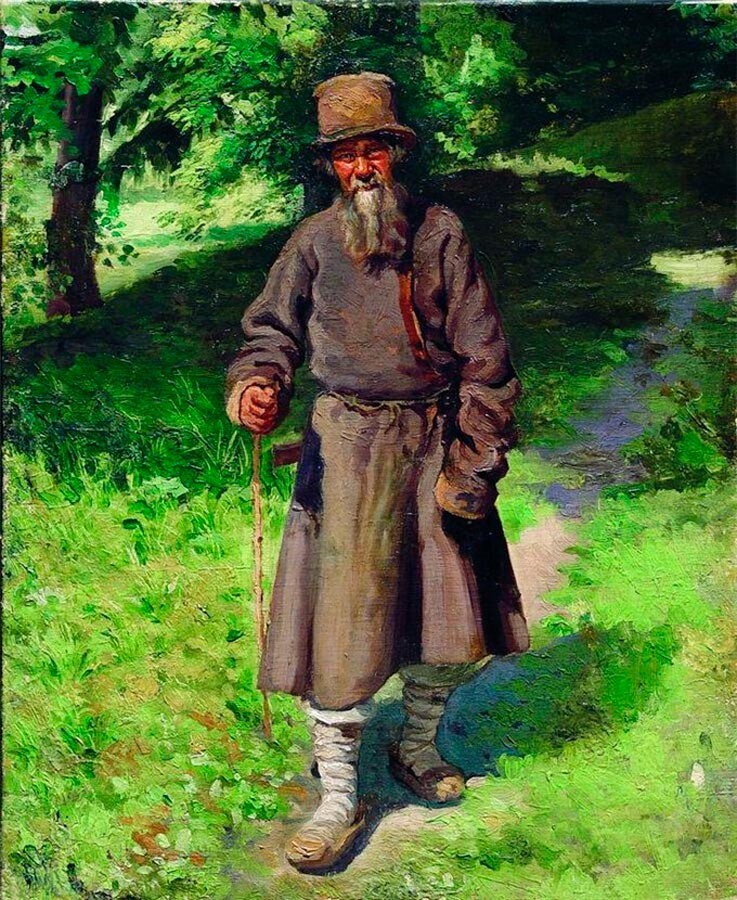 This painting shows an example of a male peasant costume. The man wears a summer zipun  caftan. The lapti bast (fiber taken from the bark of birch) shoes on his feet are tied with a rope around white onuchi bandages, which serve as a kind of socks. It isn’t an English cylinder hat on his head, but a Russian folk one, called a ‘buckwheat’ hat. 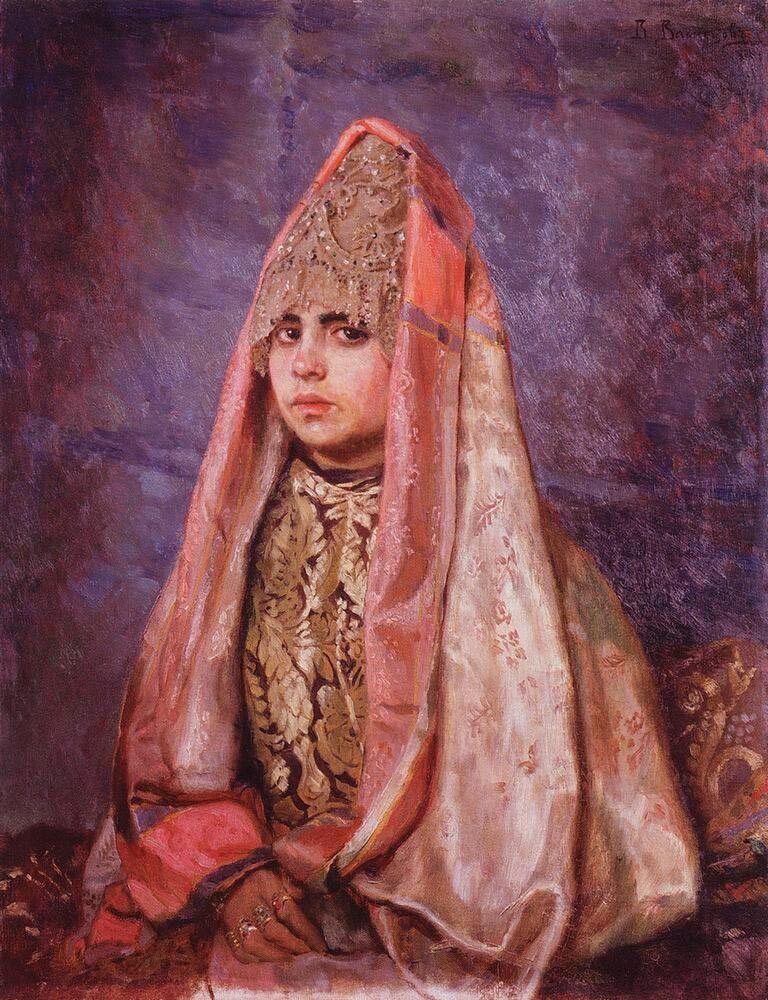 In this vintage-style portrait, Viktor Vasnetsov, the main fairy-tale painter, depicted a very interesting headdress - a tall “one-horned” kokoshnik, richly embroidered with beads. The girl is also wearing an ubrus, a cloth embroidered with patterns, on top of the kokoshnik. 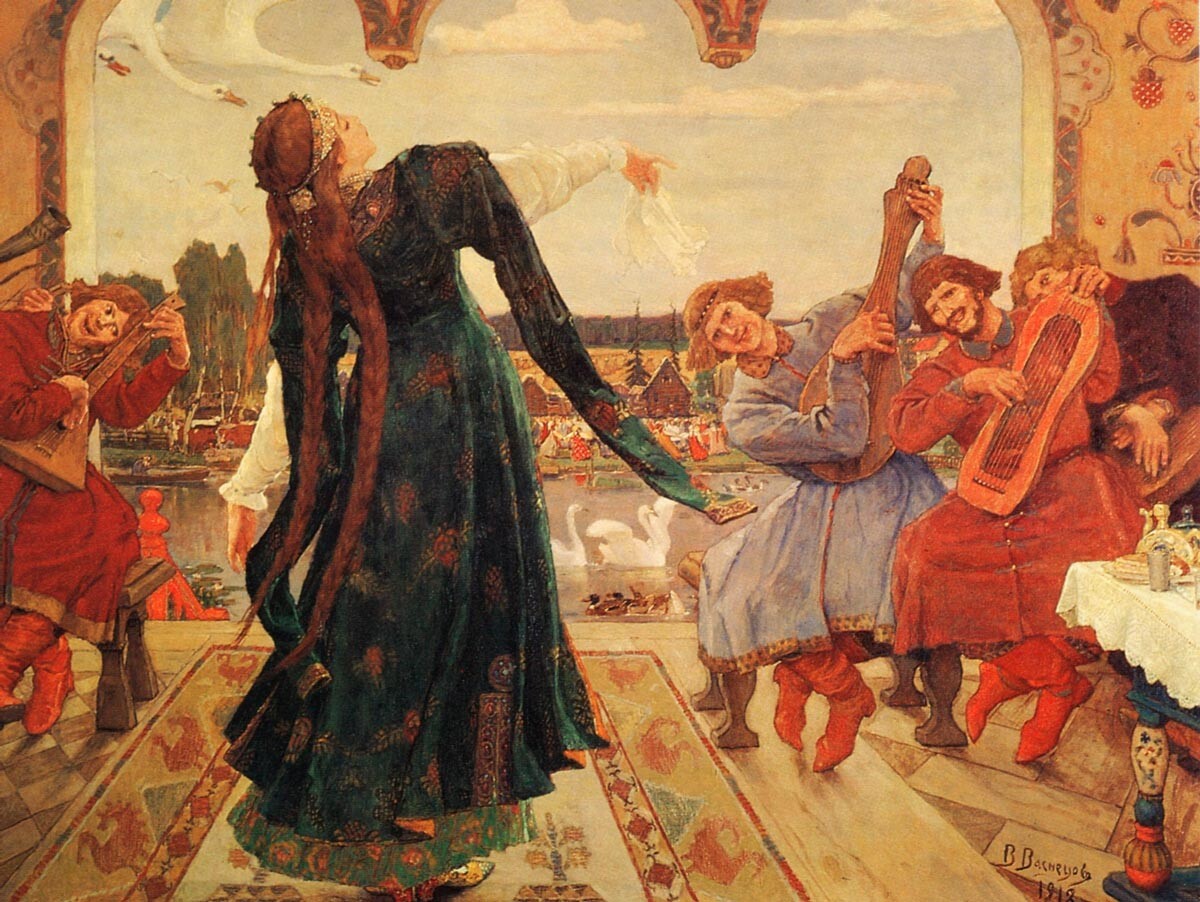 A Russian costume contained many types of outerwear with long sleeves, which sometimes even reached the floor. The arms slipped through special slits, sometimes straight from the shoulder. There is an episode in the folk tale about the ‘Frog Princess’, in which swans fly out of such long magic sleeves. 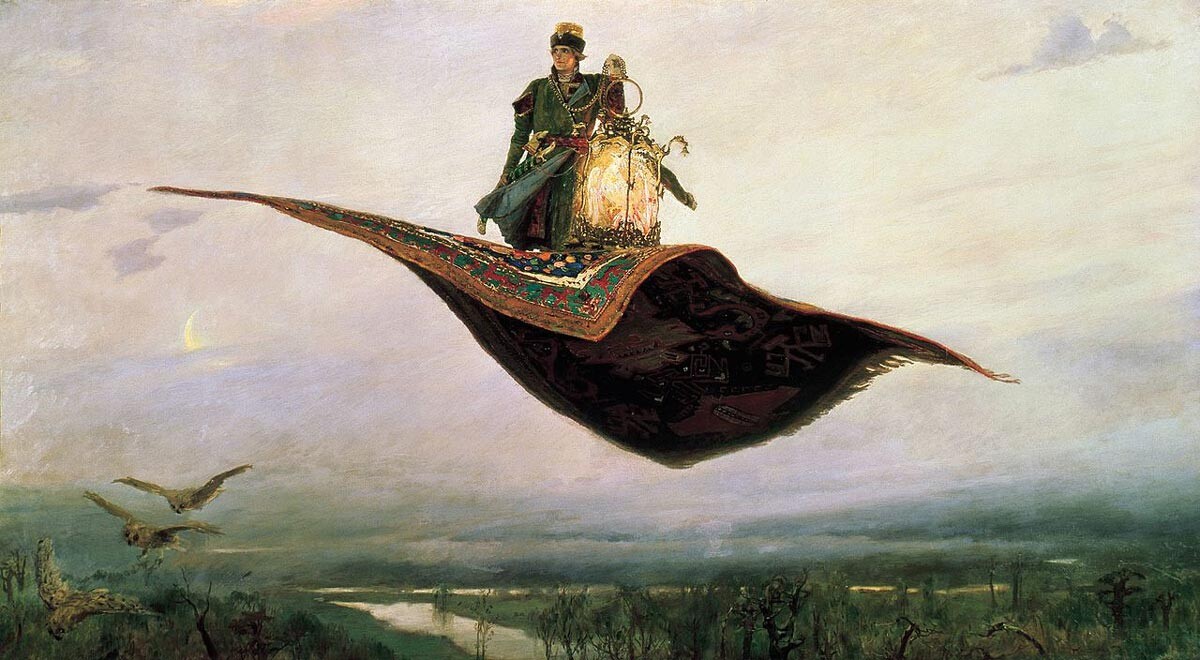 The fairytale ‘Ivan the Tsarevich’ also has clothes with slits for arms. And, if the general version used to be called opashen, his type is called feryaz. 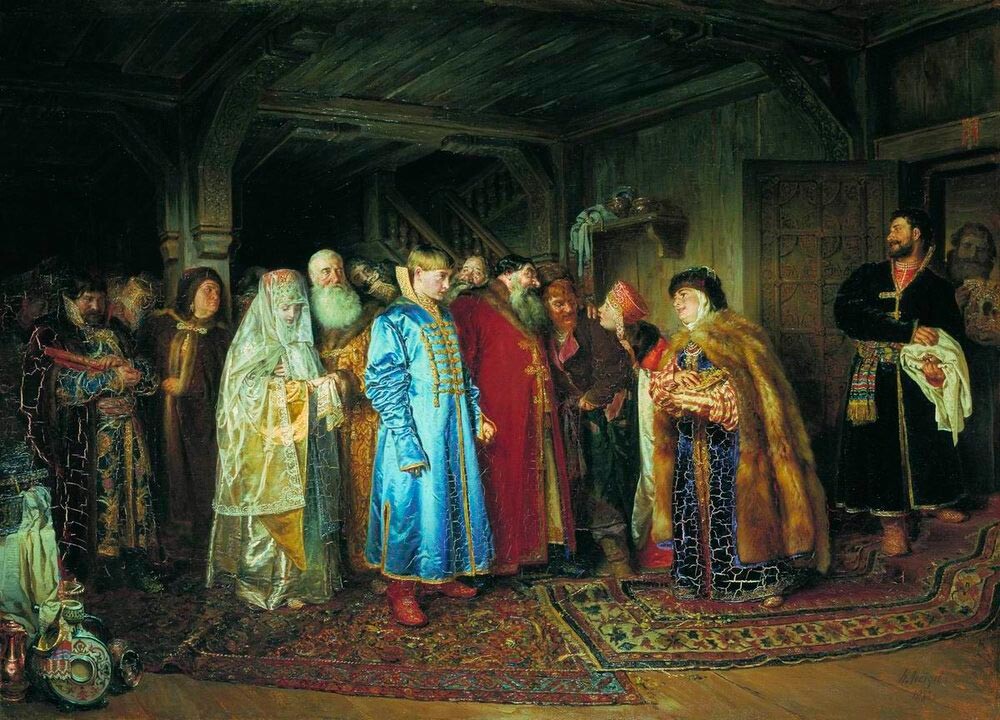 This painting shows a variety of the noble boyars’ rich festive attire: fur coats, caftans, fur capes. All women had their heads covered and the bride had an embroidered kokoshnik with a long woven ursus shawl on top. The groom’s satin caftan has a standing “necklace” collar embroidered with pearls. 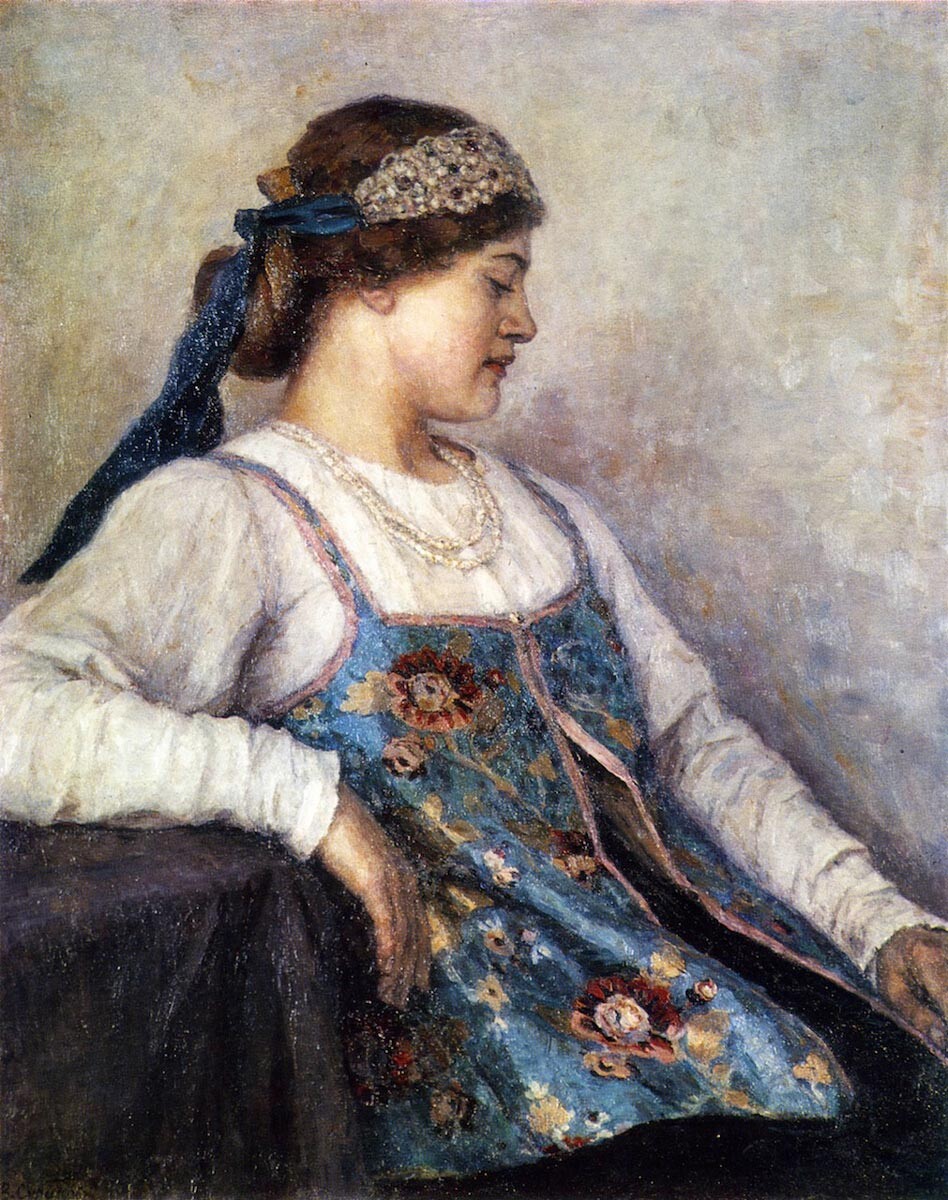 There were many types of kokoshnik - their shapes and sizes could differ even in the neighboring regions of Russia. So, it is no wonder that artists depicted this headdress a lot. Surikov put a pearl wreath on this girl. Usually, a thin strip of pearls was tied with ribbons to her braid or a knot of hair. 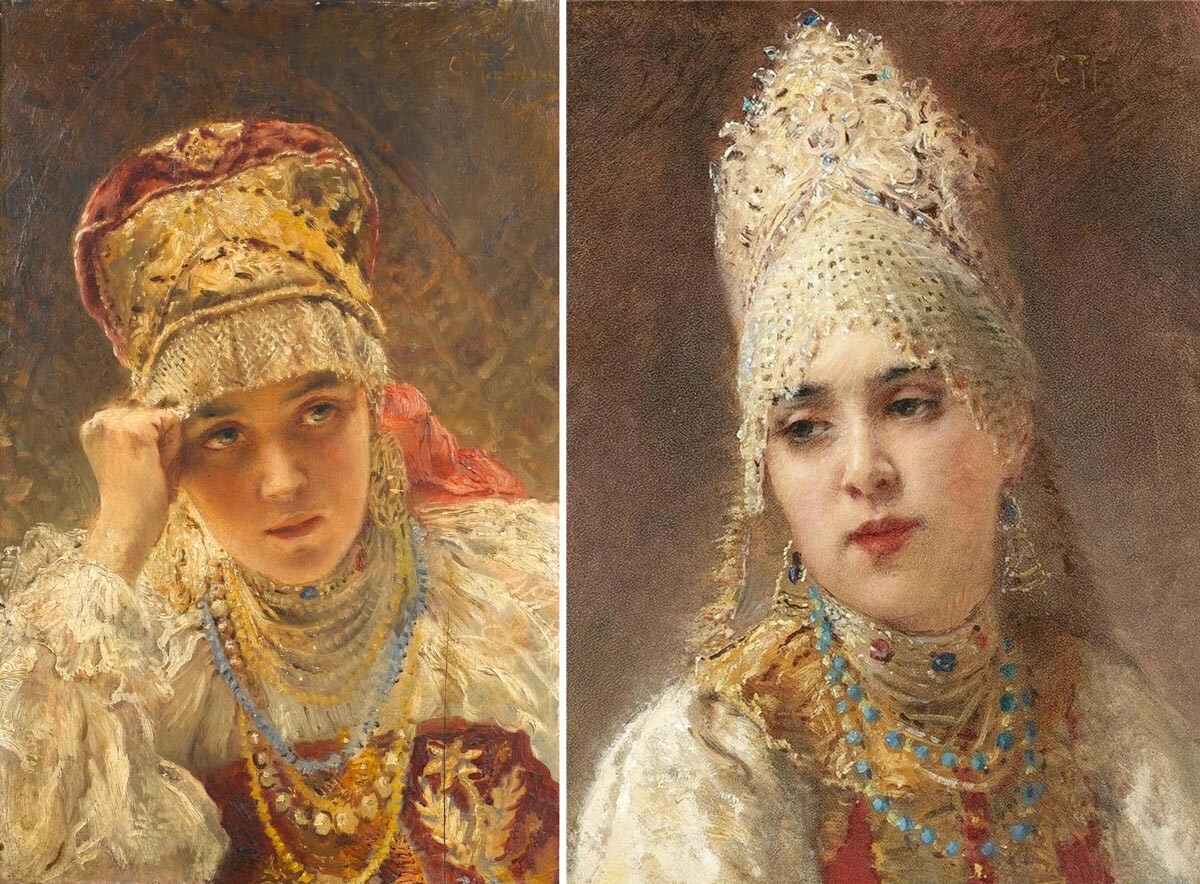 Artist Konstantin Makovsky painted a huge number of boyarina portraits in a variety of “crowns”. In the left picture, a noblewoman wears a kichka, a festive headdress of a married woman and, on the right, a festive kokoshnik is featured. 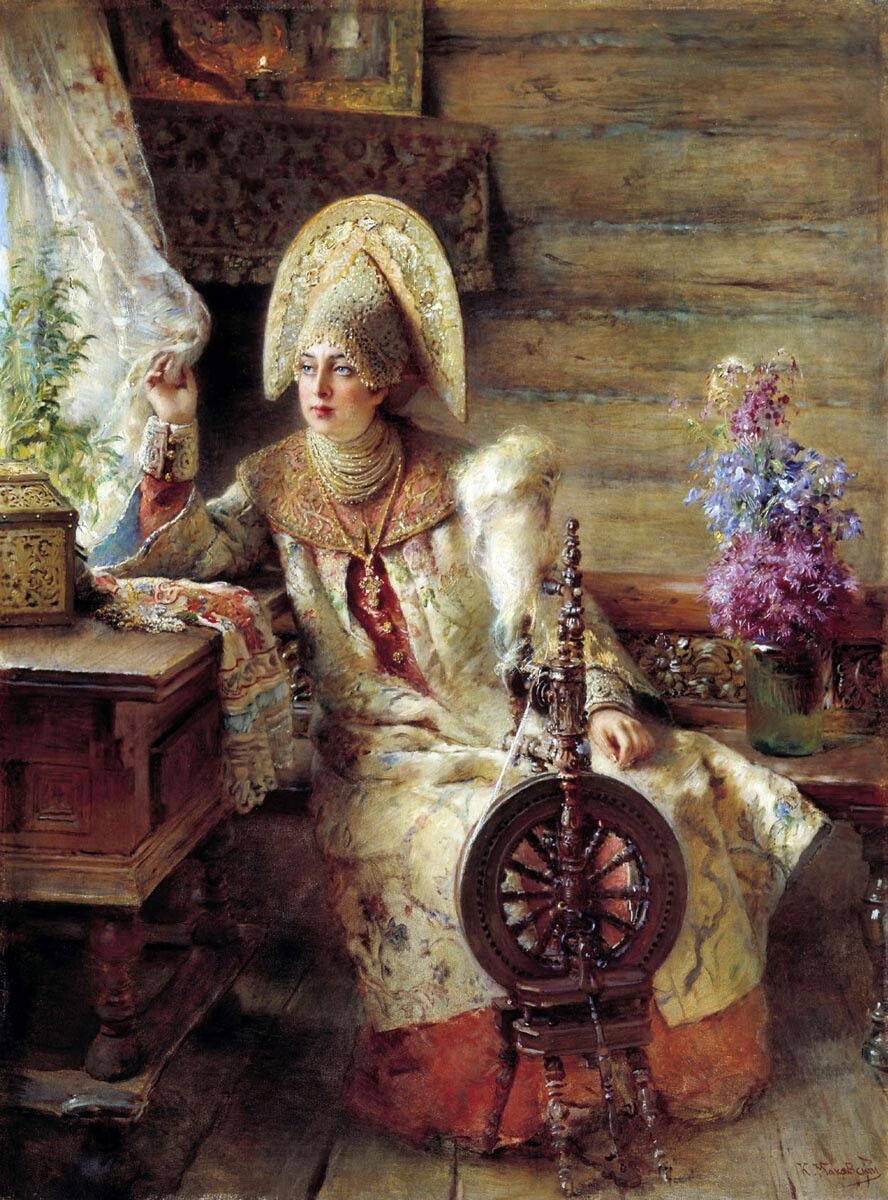 This young lady isn’t going to use a spinning wheel, she just wants to show what a good hostess and handmaiden she is. The richness of her attire suggests that she is expecting important guests, most likely matchmakers. Women would only put on such a comb kokoshnik and elegant opashen outerwear with wide sleeves on very special occasions. 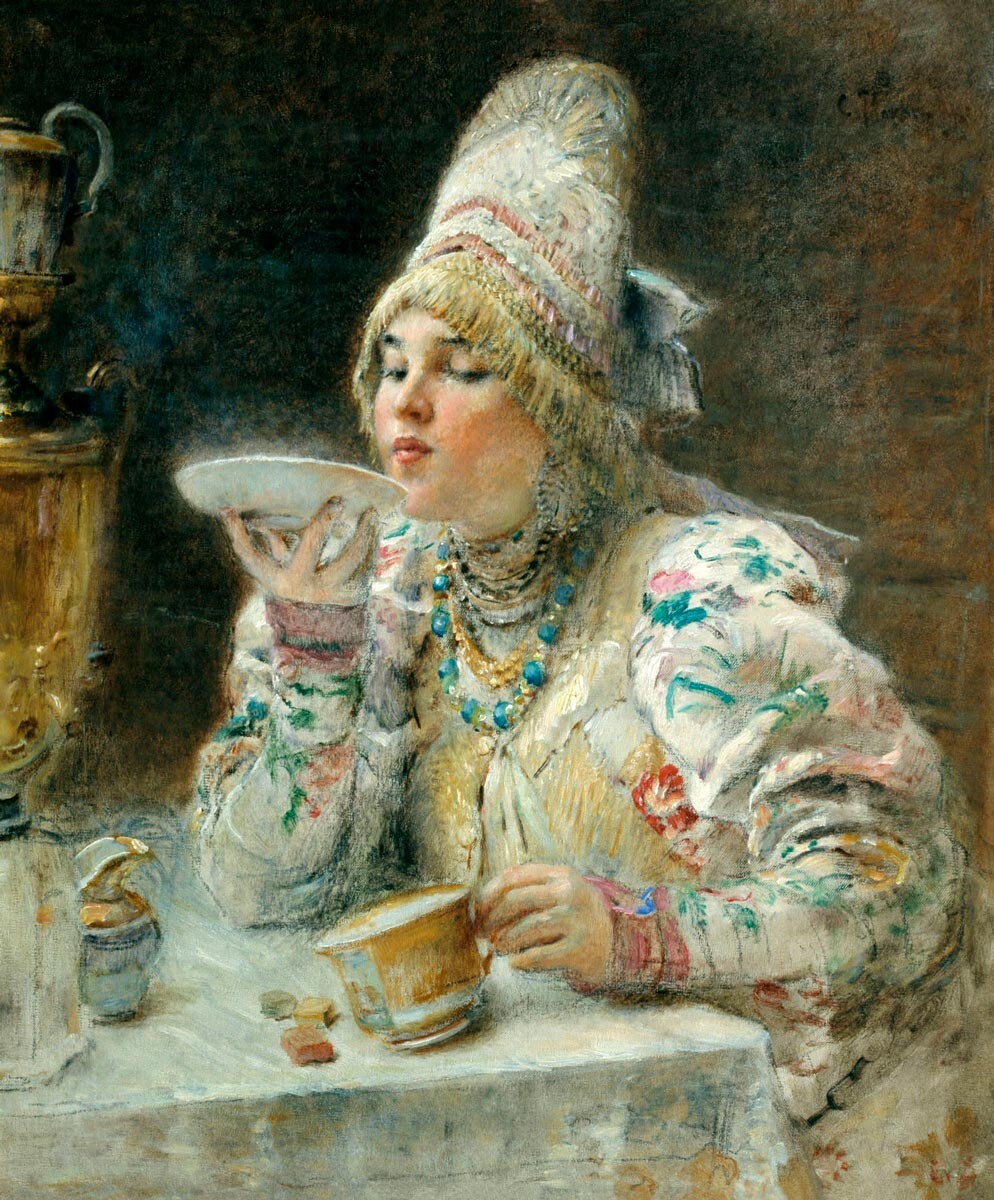 Another fabulous version of a festive kokoshnik. 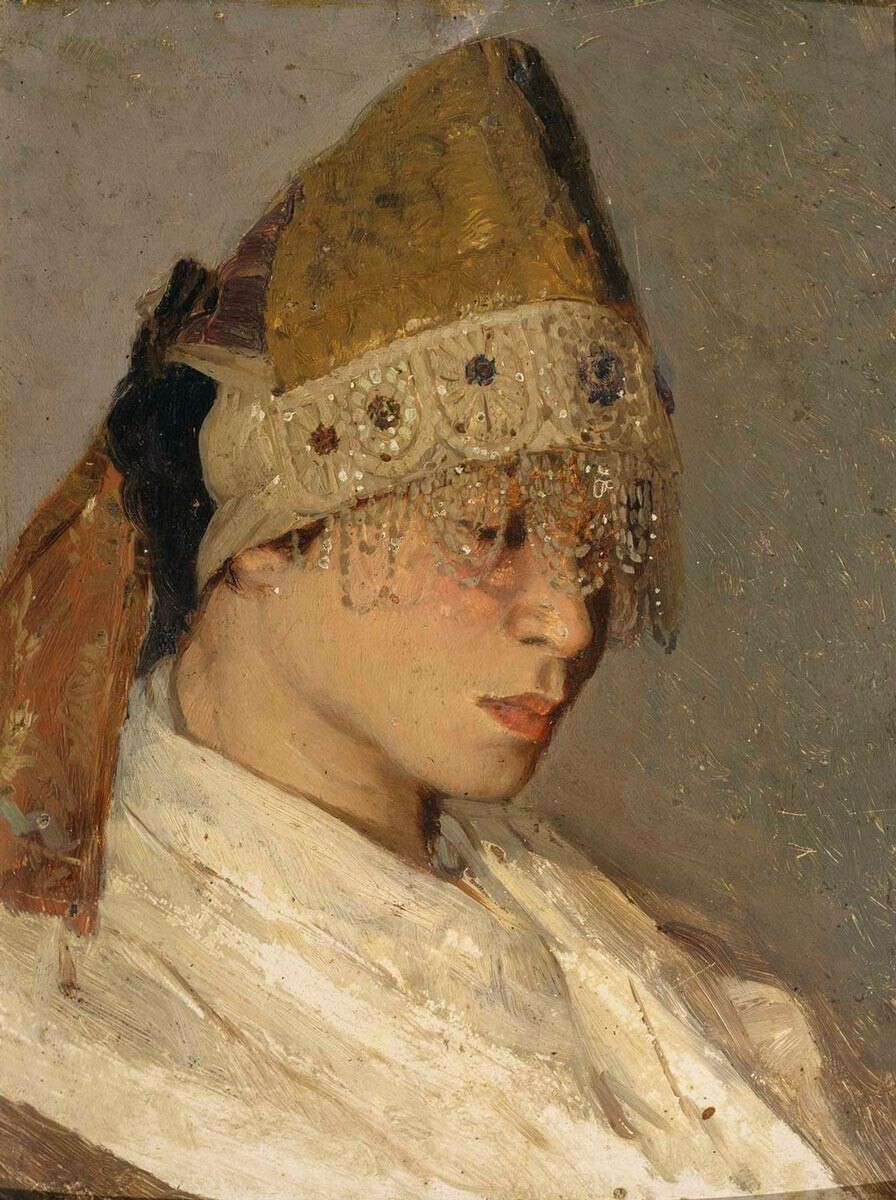 Nesterov dressed his model in a mystery kokoshnik with a pearl veil.

Mikhail Nesterov. The Vision to the Youth Bartholomew, 1889-90 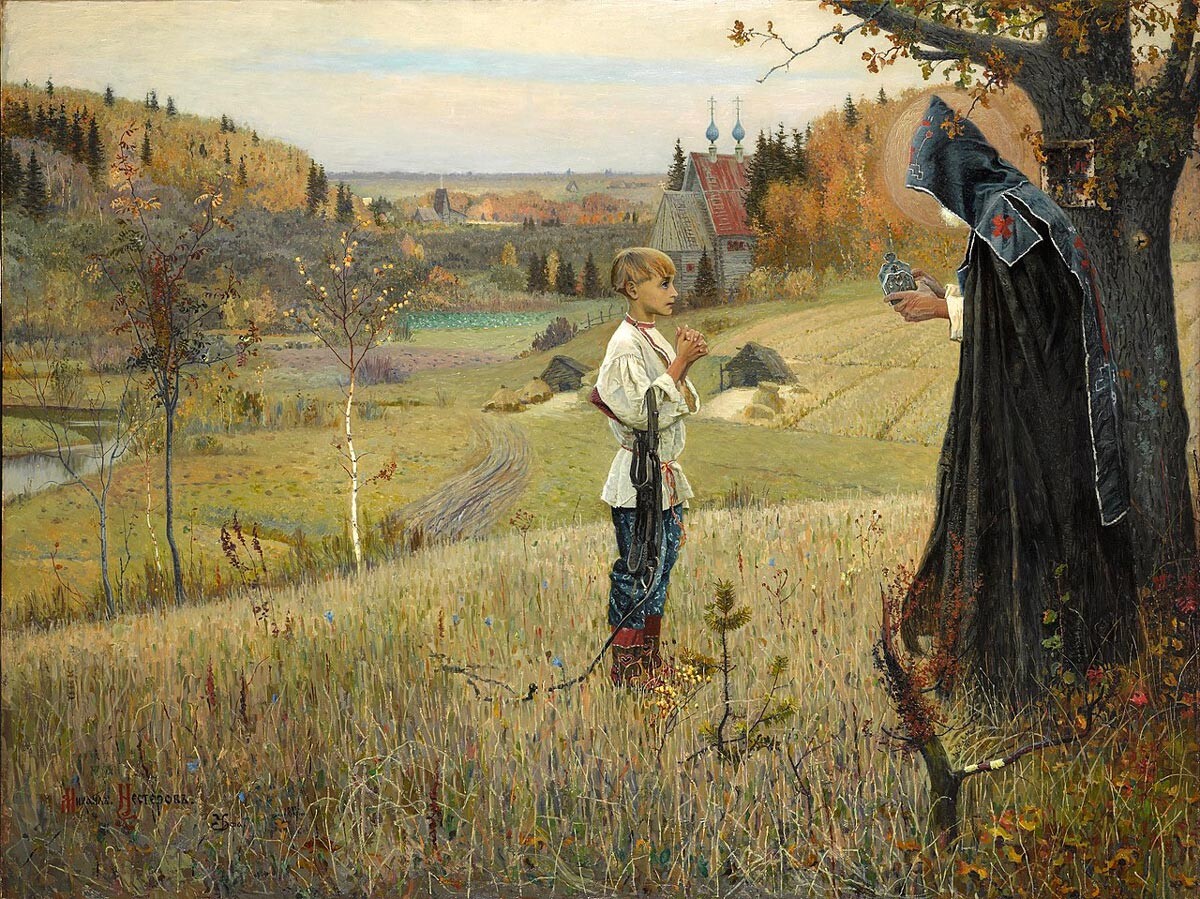 Nesterov depicted traditional male attire in a historical painting about the future Saint Sergius of Radonezh. The boy is wearing a kosovorotka shirt (the skewed collar helped keep the cross around the neck from falling out from the shirt during field work), a belt and loose-fitting pants tucked into high boots. 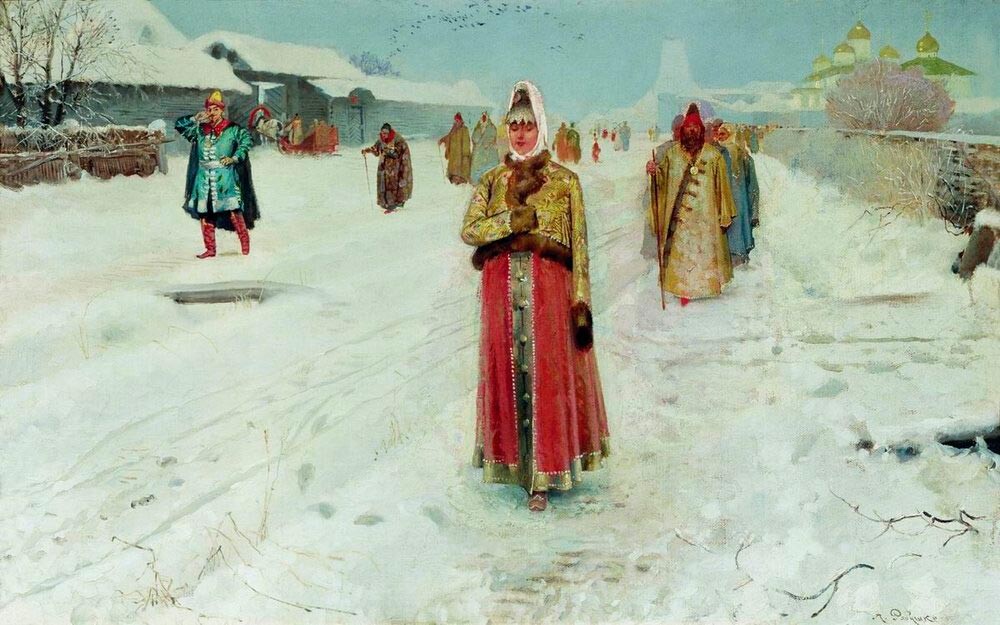 This artist depicted people going home from the Sunday church service in several outfits. A rich boyar on the right is dressed in a winter kozhukh caftan. The girl in the middle is wearing a shugai fur jacket over a warm long opashen coat with a number of buttons. And, finally, we can see a richly embroidered caftan and a cape with a collar on the man on the left. 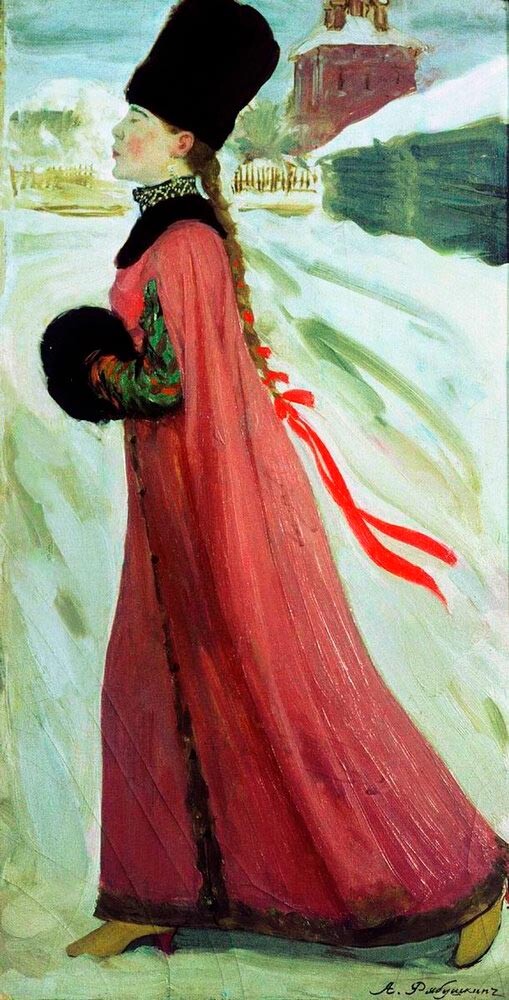 Such a fur headdress was called a gorlatnaya hat (but usually just called a ‘boyar’ hat). It was one ell (ca. 45 cm) in height and was worn by both men and women in Russia, but only by the noble and wealthy ones. The outer clothing of the noblewoman is a type of fur coat with slits for the arms (again). The girl hid her hands in a fur muff. 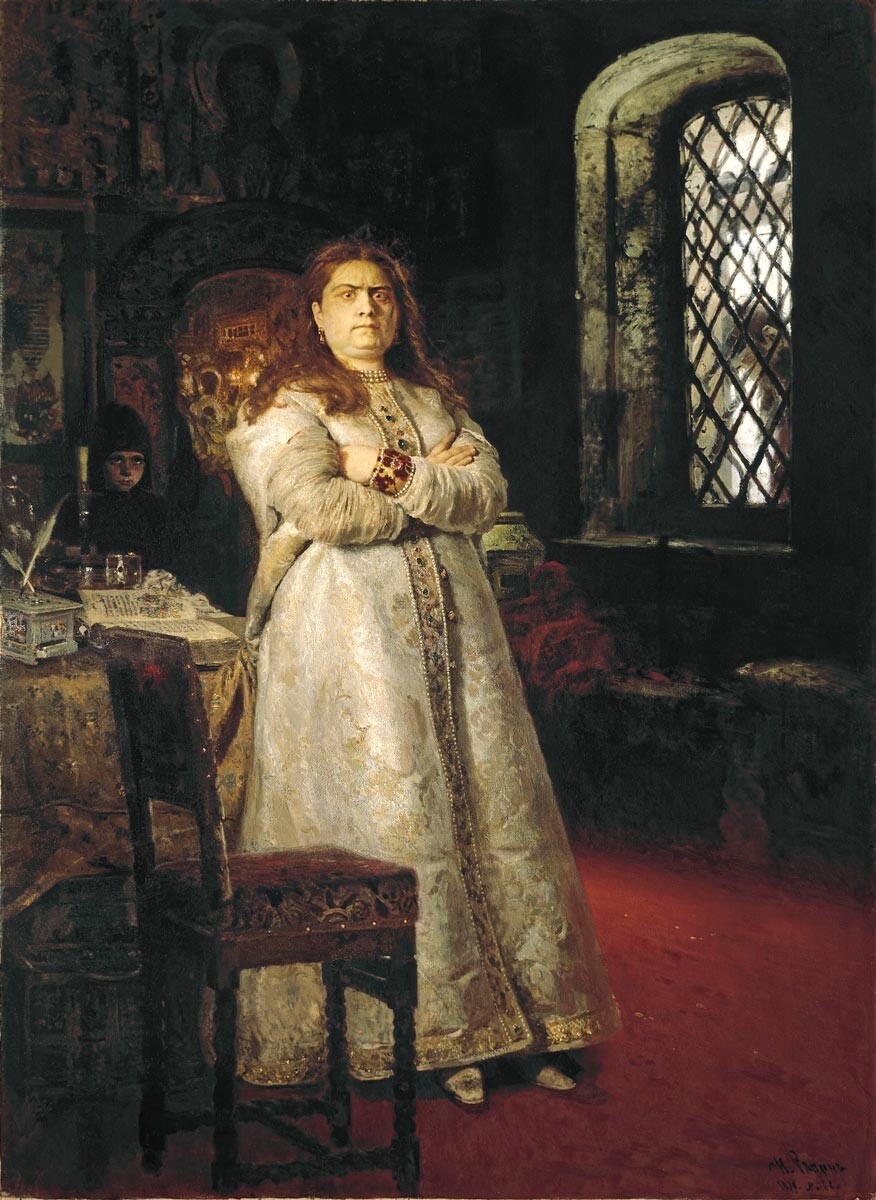 Members of the royal family wore clothes of the same cut and forms as those of the boyars and the nobility. But the fabrics were much more expensive and the accessories and buttons could be made from precious stones.