Which flowers are usually depicted on Russian scarves? (PHOTOS) 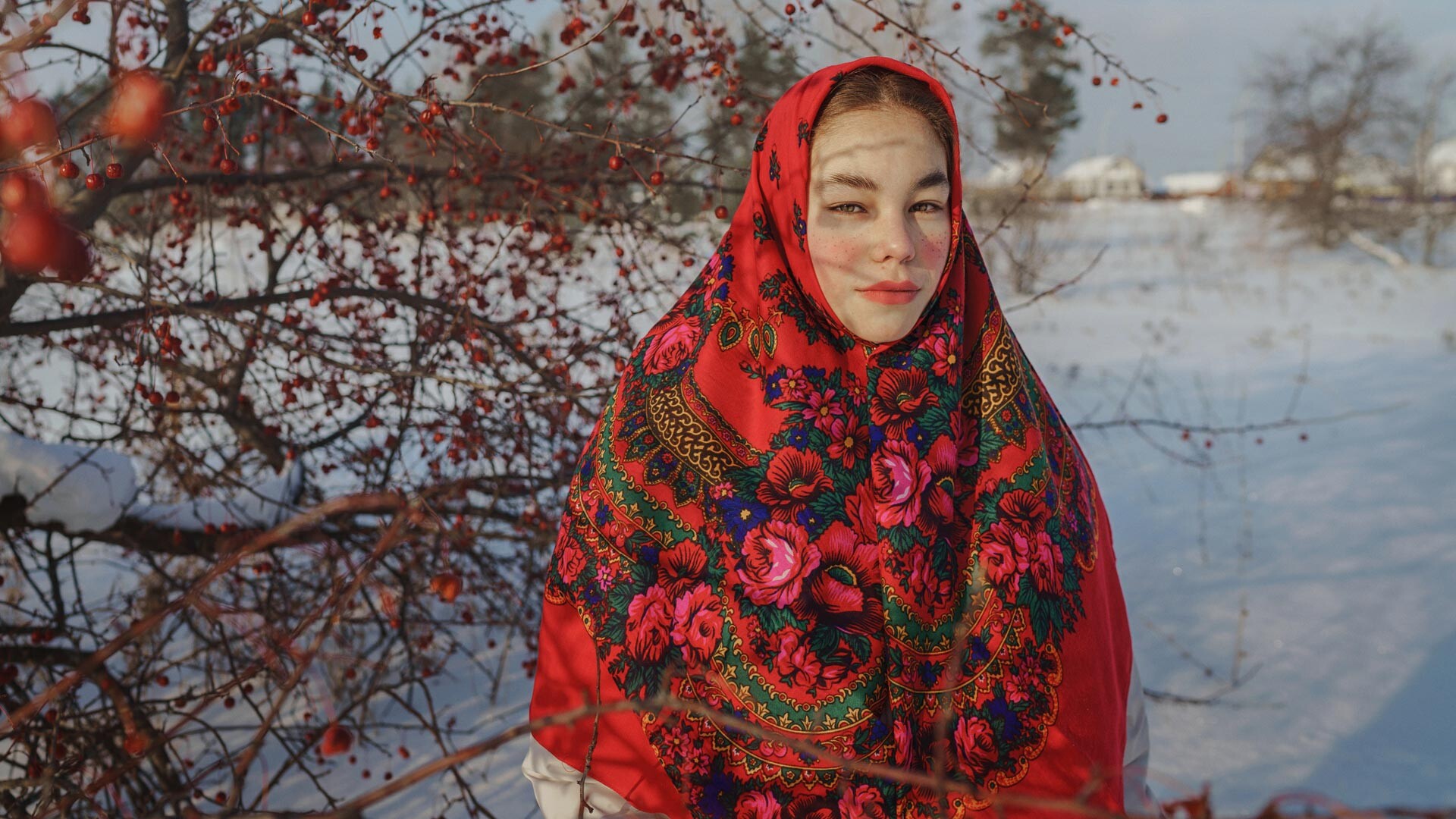 Dilyara Ramazanova / EyeEm /Getty Images
These legendary shawls have been manufactured in the town of Pavlovsky Posad outside Moscow since the late 18th century. Their unique floral patterns have captured the concept of beauty that has existed for centuries among Russian women.

Perhaps nowhere else do people like scarves as much as in Russia. They’re worn by women of all ages, as a head covering or scarf in the winter and instead of a cape on summer evenings. There are different types of traditional headscarves in Russia, but the most popular is the Pavlovo Posad shawl. It is this scarf, lavishly decorated with floral patterns, that is most often called ‘Russian’ abroad’ and bought as a souvenir. By the way, it is quite easy to distinguish a Russian-made scarf from others: First of all, it is the shape of a square and only comes in a limited range of dimensions - from 72 × 72 to 148 × 148 cm. Secondly, traditional scarves have a natural composition (wool, silk or cotton), although they may occasionally be blended with a little added viscose for durability. Thirdly, each scarf has its own name, given by the artist. And, of course, although Russian scarves now come in a large range of original drawings, Russian shawls are recognized precisely by these symmetrical floral patterns with large details in the center. 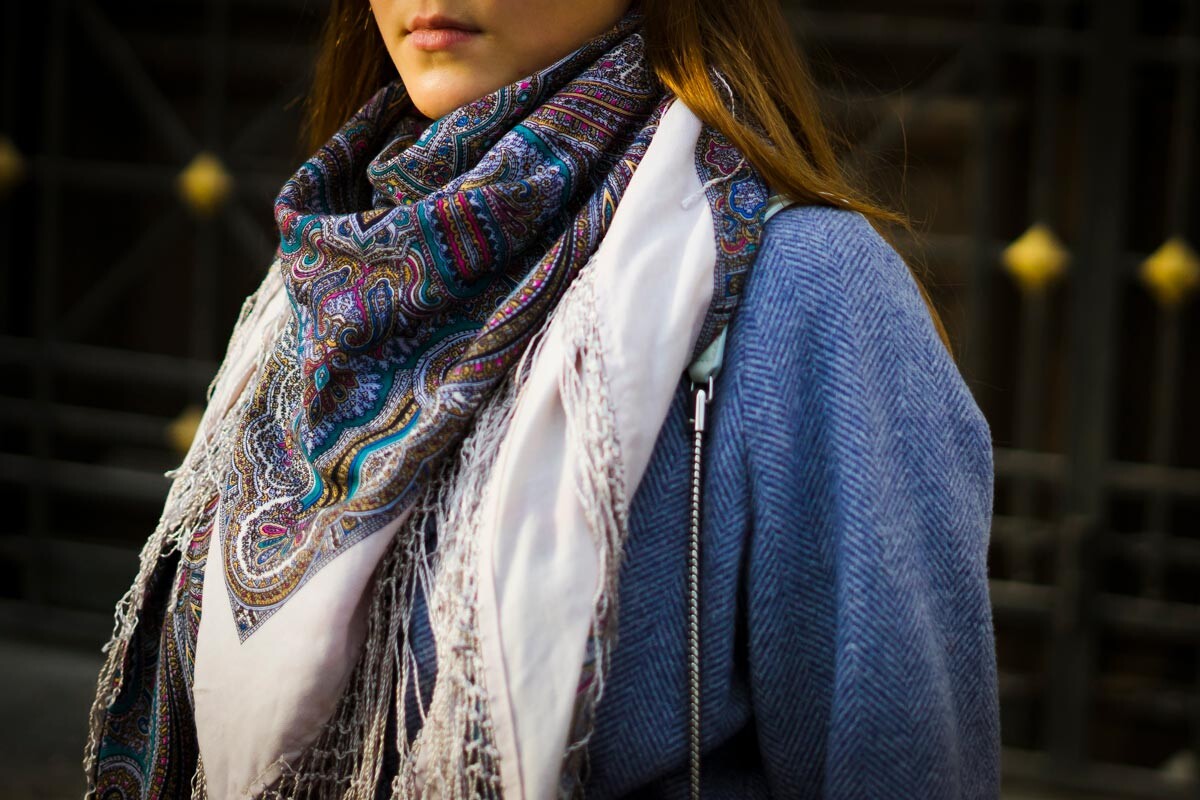 Shawls arrived in Europe from the East, so it’s no wonder the very first patterns on Russian scarves were the so-called paisley - decorative elements in the form of either a cucumber or a drop.  At the same time, Russian shawls are decorated with ‘cucumbers’, ‘beans’ and ‘fans’ in their own style: symmetrical large patterns on the corners and necessarily bright colors - for a good mood in a cold winter.. Until the mid-19th century, it was oriental ornaments that were the most popular and not only on Pavlovo Posad shawls, but also on scarves by other Russian manufacturers, which no longer exist today.. Modern shawls are also produced with a variety of oriental patterns: ‘Oriental Journey’ (reissue of one of the first shawl patterns - blue and burgundy paisley on a brown background), ‘Sorceress’ (reissue of a pattern from the end of the 19th century - brown curls on a black background), ‘Women's happiness’ (golden ornament on a blue background) and ‘Pearl dew’ (red patterns on a black background).. 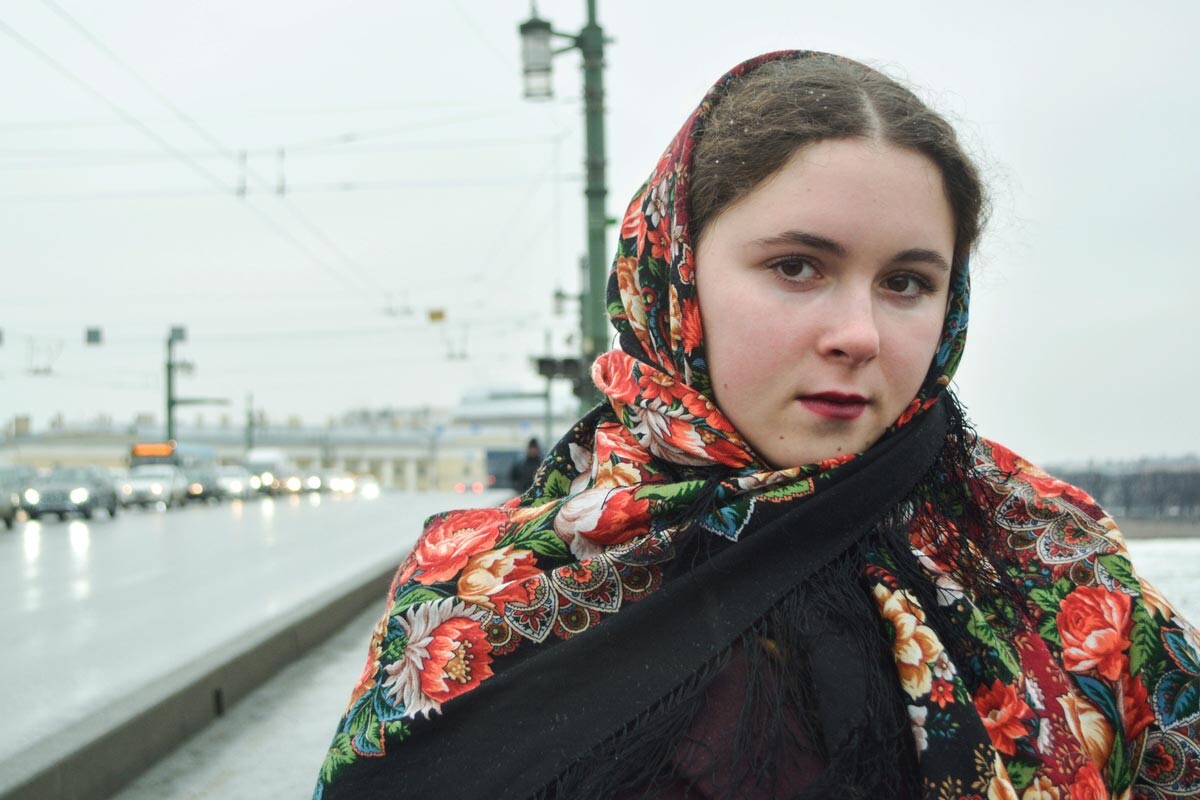 Images of large blossoming rosebuds on fabrics, on ceramics and in interiors came into fashion in Russia in the 1870s, but perhaps they reached their greatest prosperity precisely at the factory in Pavlovsky Posad. Initially, floral ornaments had three backgrounds - black, burgundy (or dark red) and light (flax-colored). Modern artists also use blue, green and pink, painting the background with intricate flower arrangements. At different times, artists supplemented the compositions with “trend” details, as fashion critics would say: they would add a curl, then a ribbon, then a drunken stem, then a raspberry branch or even “weave” a couple of other flowers into the bouquet. Everything for the buyer to like the scarf. Roses in a broad sense symbolized luxury, beauty, feelings and, therefore, a scarf with such a pattern has always been a very popular gift. Rose designs are often reissued over the years. For example, even today, you can find the scarves ‘White Roses’ (roses on a blue background) - this is a pattern from the 1950s, ‘Colors of Summer’ (pink flowers with green leaves on a red background), an old pattern, most likely, the end of the 19th century, as well as many others, in stores.

A feature of the Pavlovo Posad technique is the naturalism of the buds, which seem voluminous and realistic, as if they had just been collected in the garden. 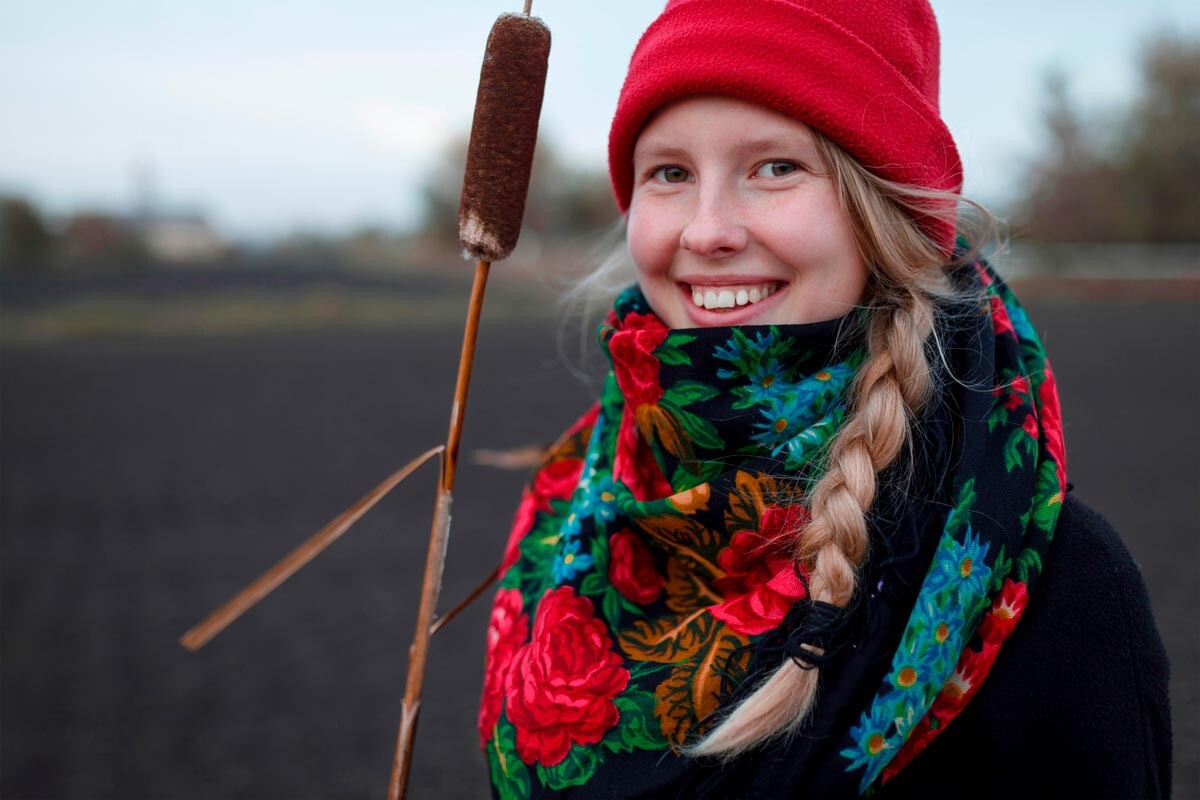 Another very popular flower that artists like to decorate Russian scarves with is the dahlia of various shades - but always bright and contrasting with the background. In nature, dahlias are white, red, orange, but on Pavlovo Posad shawls one can find blue, purple and golden ones. They symbolize gratitude. Like roses, dahlias are often decorated with ribbons and leaves in the fashion of their time. Dahlias are also found in a “bouquet” with other garden flowers, such as peonies, lilies or tulips. 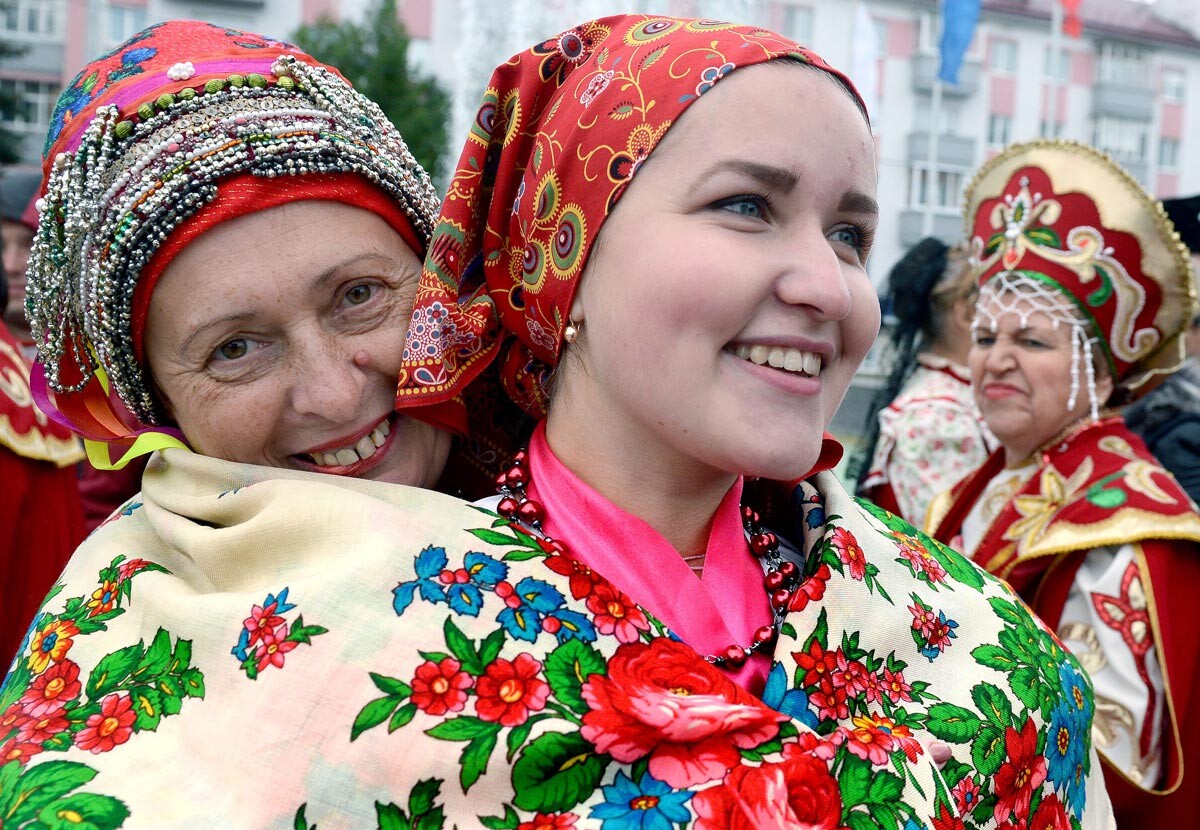 In addition to graceful roses and dahlias, you can also see simple wildflowers on Pavlovo Posad shawls. Most often, artists come up with very cute compositions of cornflowers, forget-me-nots and daisies — wildflowers that typically grow in Russian fields and meadows in the summer. Unlike garden flowers, these wildflowers are most often painted smaller and arranged into a composition with a “bouquet” of other flowers, all woven into a large garland.