Charoite: An incredibly beautiful stone only found in Siberia (PHOTOS) 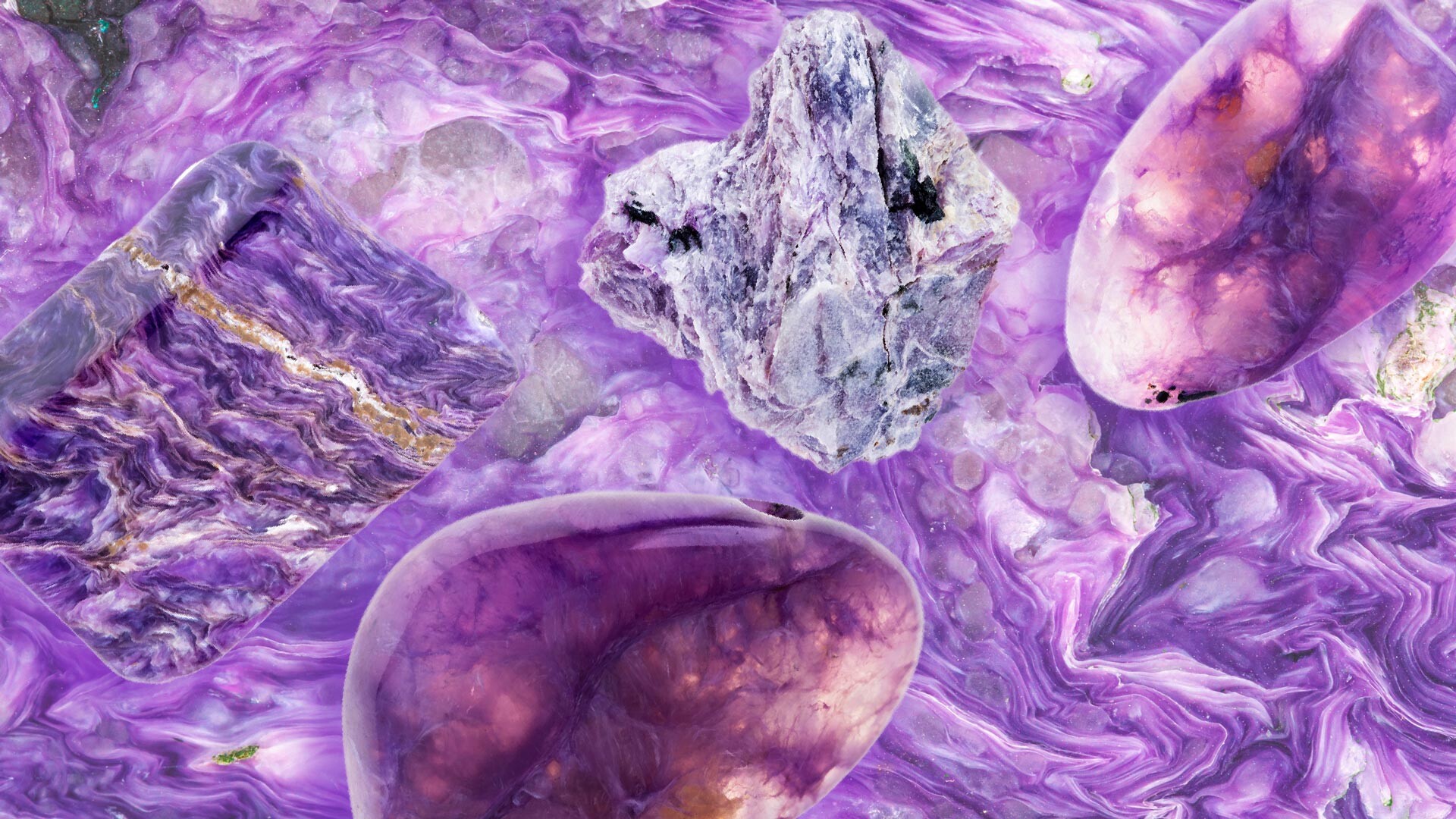 Legion Media
Nowadays, this rare mineral shines in dozens of colors on women’s earrings and rings. It was discovered by Soviet geologists in the faraway Yakut taiga.

Lilac shimmers on a violet background - this is how it looks, the amazing gem mined in the only place in the world, southern Yakutia, near the Charа River. This mineral was uncovered by Soviet geologists, who actively explored the Siberian taiga in the 1940s in search of metal and gem deposits. 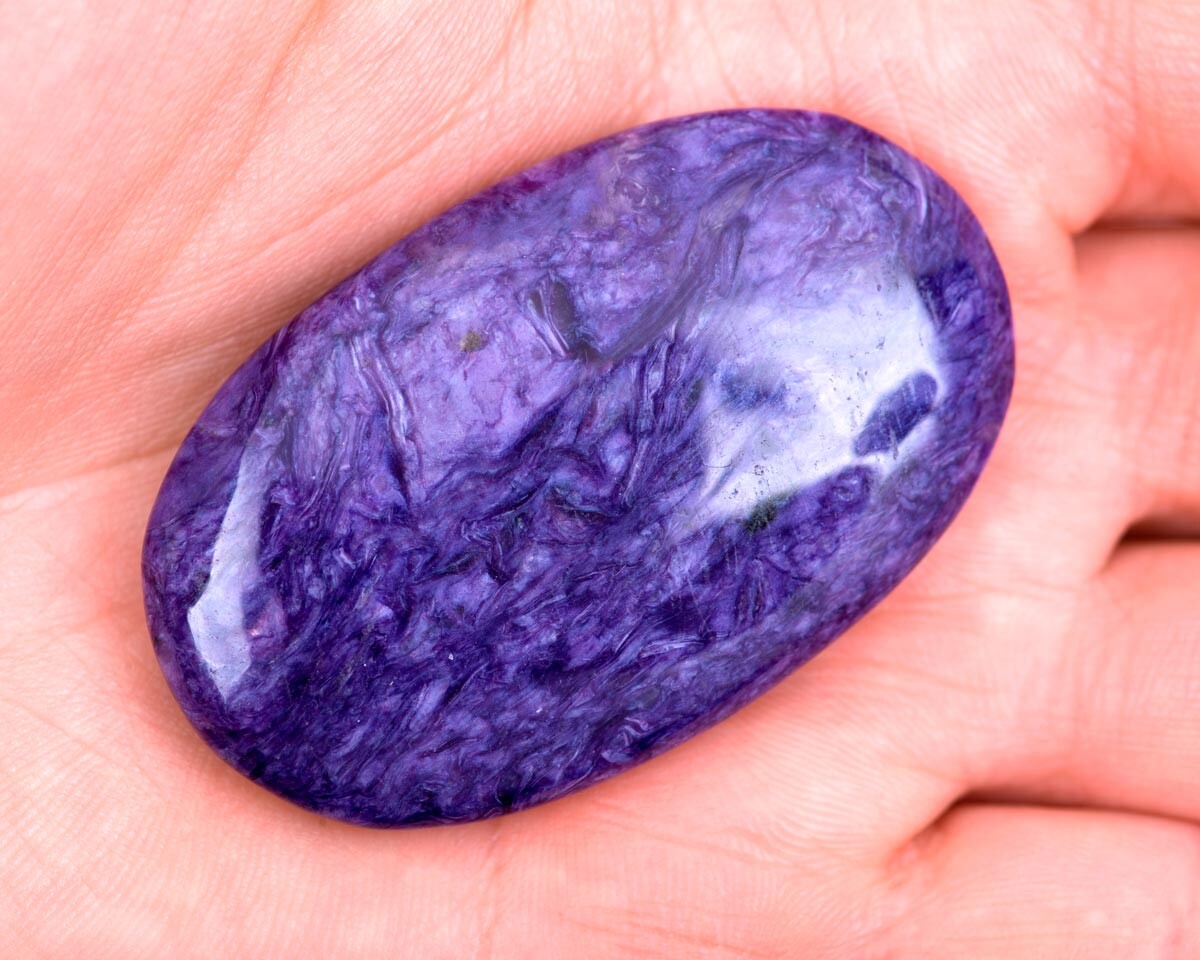 Geologists found the first samples of this new stone in 1948. A group of scientists led by Vladimir Ditmar (1903-1967) was conducting a geological survey in the Chara area, not far from the Murun mountain massif. And, in the stream’s bed (it’s now named after Ditmar), the geologist saw a purple stone, which he initially mistook for an ordinary slate with some impurities. His “catch” was mapped, but it was soon forgotten. This place was so remote from civilization that it remained a “white spot” in geology for decades. 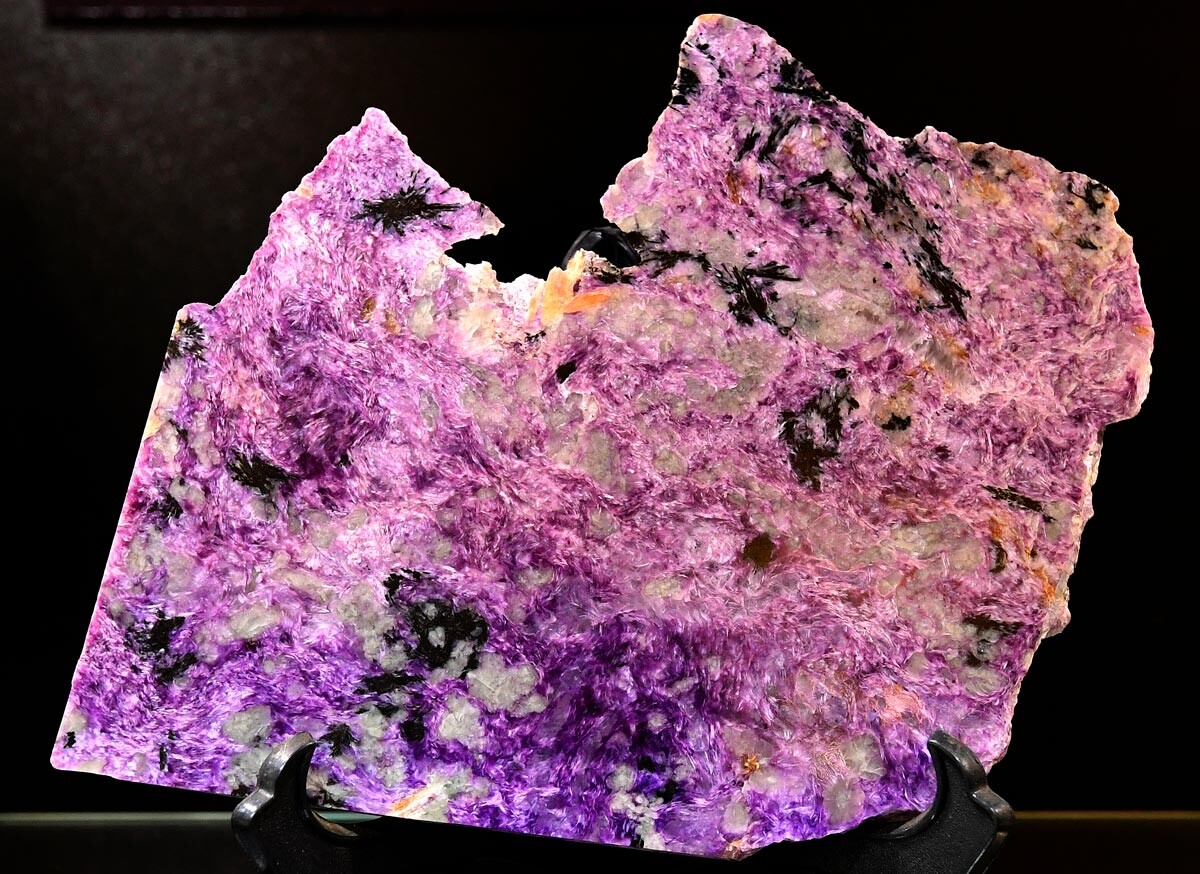 A quarter of a century later, in 1973, there, on Murun, Yuri Rogov was searching for uranium with a team of young geologists. They visited the Ditmar’s group site and not far from their half-decayed barracks, Rogov saw “a wierd, meter-high boulder”, as he described it later. 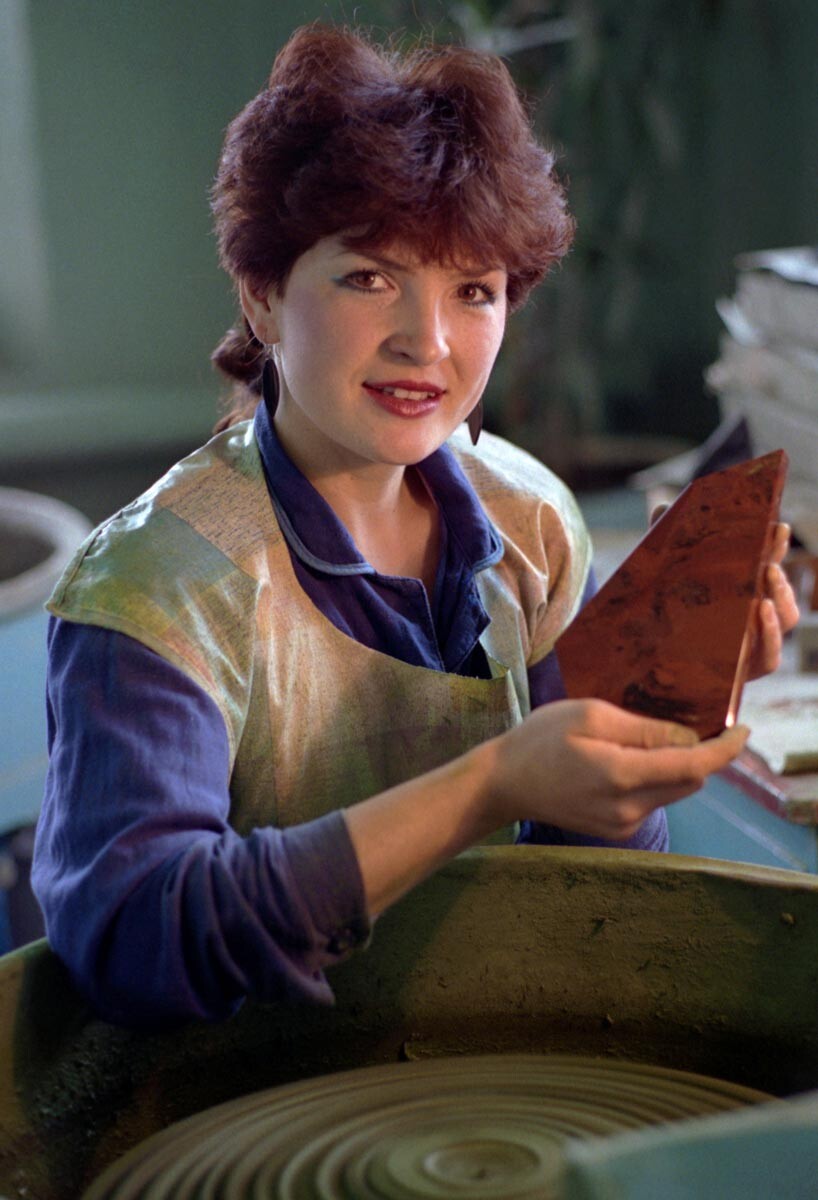 A worker at a Yakutian manufactory of charoite, 1990.

“The stone’s purple color was like if it was covered by a whitish plaque, rather unsightly. I tried to chip off a piece of it, but it couldn’t be chipped,” Rogov recalled. “I began to beat it on a block until the handle of the geological hammer cracked. Finally, I chopped off a piece of stone - it was like a Syringa splash. Then, I thought of bringing it to my wife: a curious color, women like bright things.” 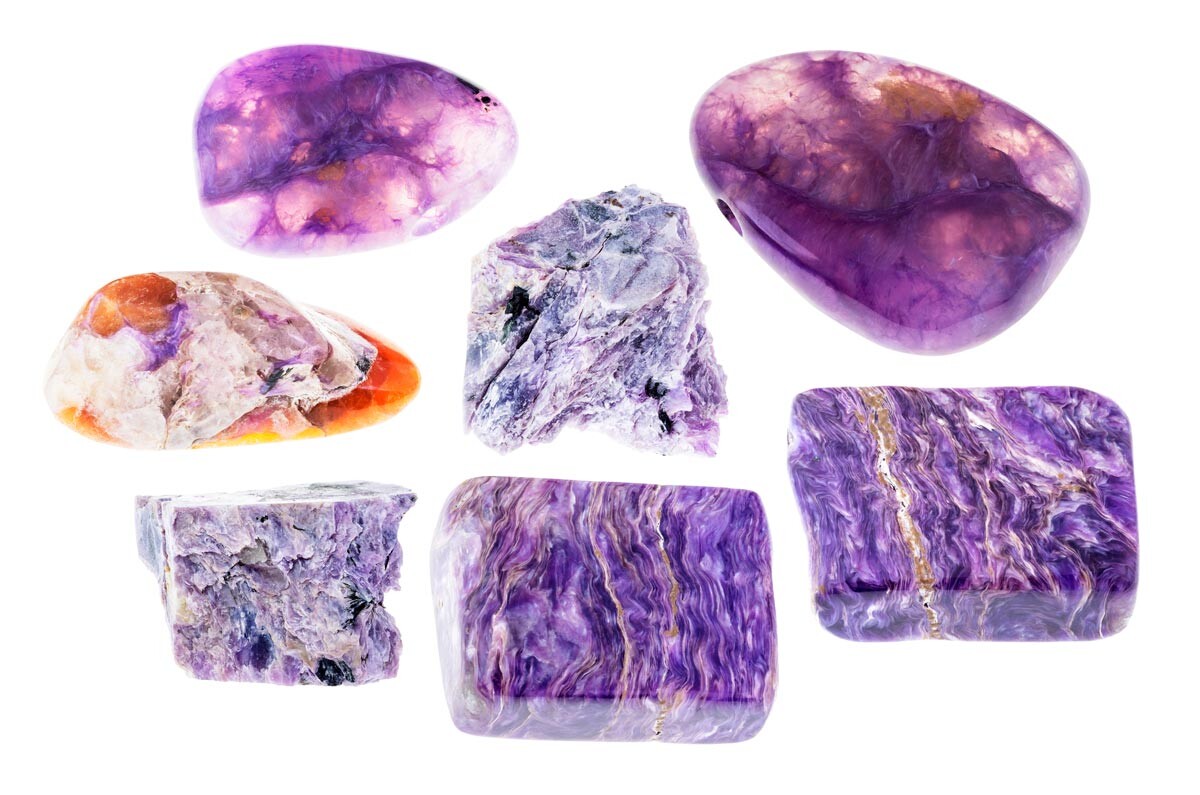 Vera Rogova was a mineralogist on the same expedition and was initially interested in the yellow impurities, immediately suggesting that they could be new minerals (as it turned out later). However, it was not quite clear what kind of lilac stone this was. They took about 30 kilograms for the study and explored this stone in their free time. 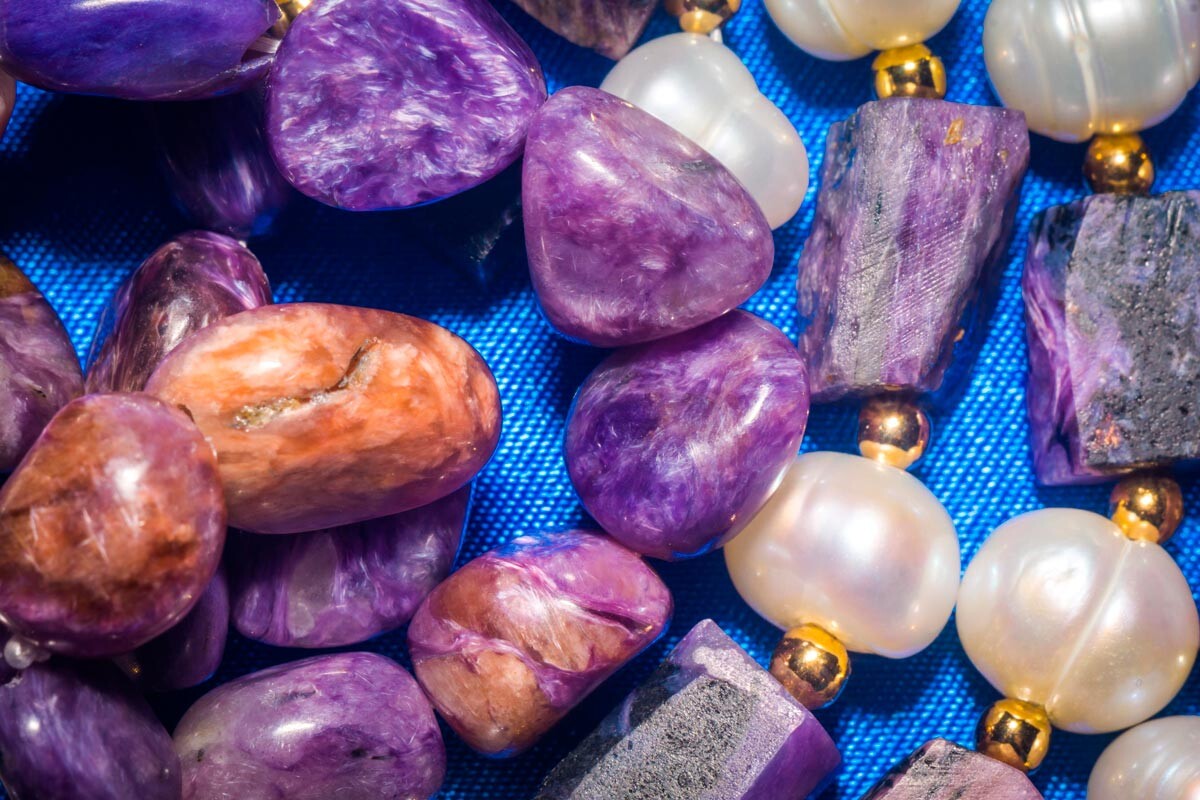 Several years later, Rogovs’ colleague, geologist and a gem expert Yuri Alekseev, found out about this stone. He assumed that the couple had discovered a brand-new gemstone, so he and Rogov took about a ton more samples and sent them to Moscow for examination. 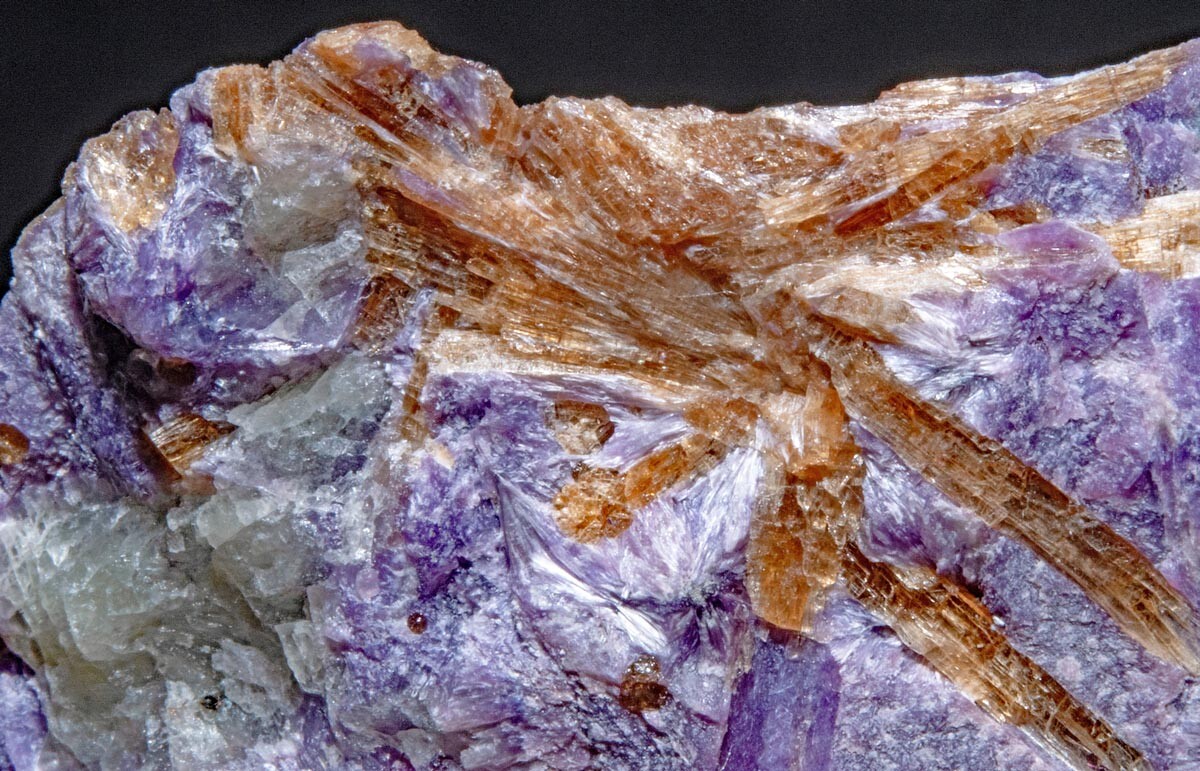 Until 1977, charoite was an untitled mineral, as it had been studied for several years by entire geological commissions. In fact, this gem contained rare-earth elements and new, unknown minerals (tinaksite, tokkoite, frankamenite, murunskite), that colored it with incredible patterns. Nevertheless, in the end, the name of ‘charoite’ was given after the Chara River. 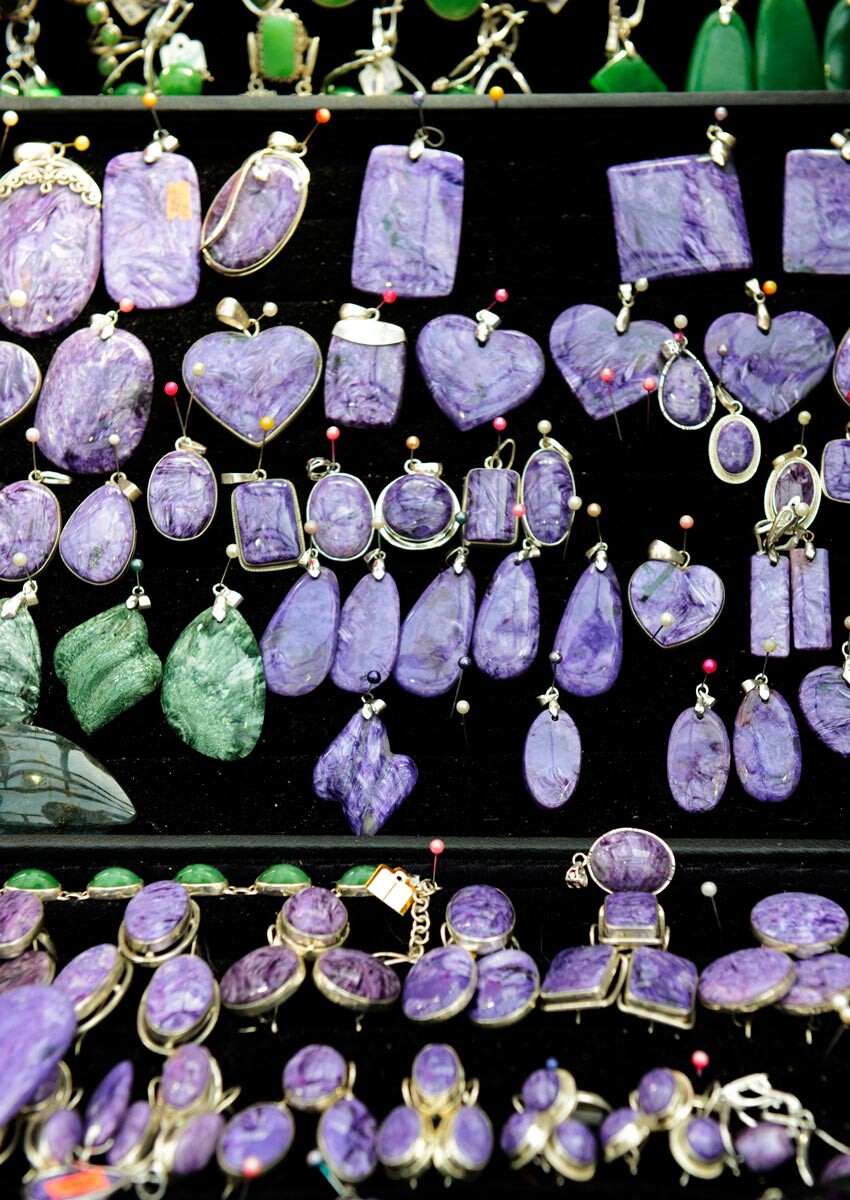 But even before its official registration, charoite gained popularity among Soviet jewelers and gem artisans. All because of its lilac shimmer, which makes it look wonderful, not only in silver or golden women’s jewelry, but also as a separate piece. Charoite is also a material for vases, as well as for jewelry boxes. Charoite comes in many shades, from light lilac to dark purple, all of which change smoothly, shimmering in the light. 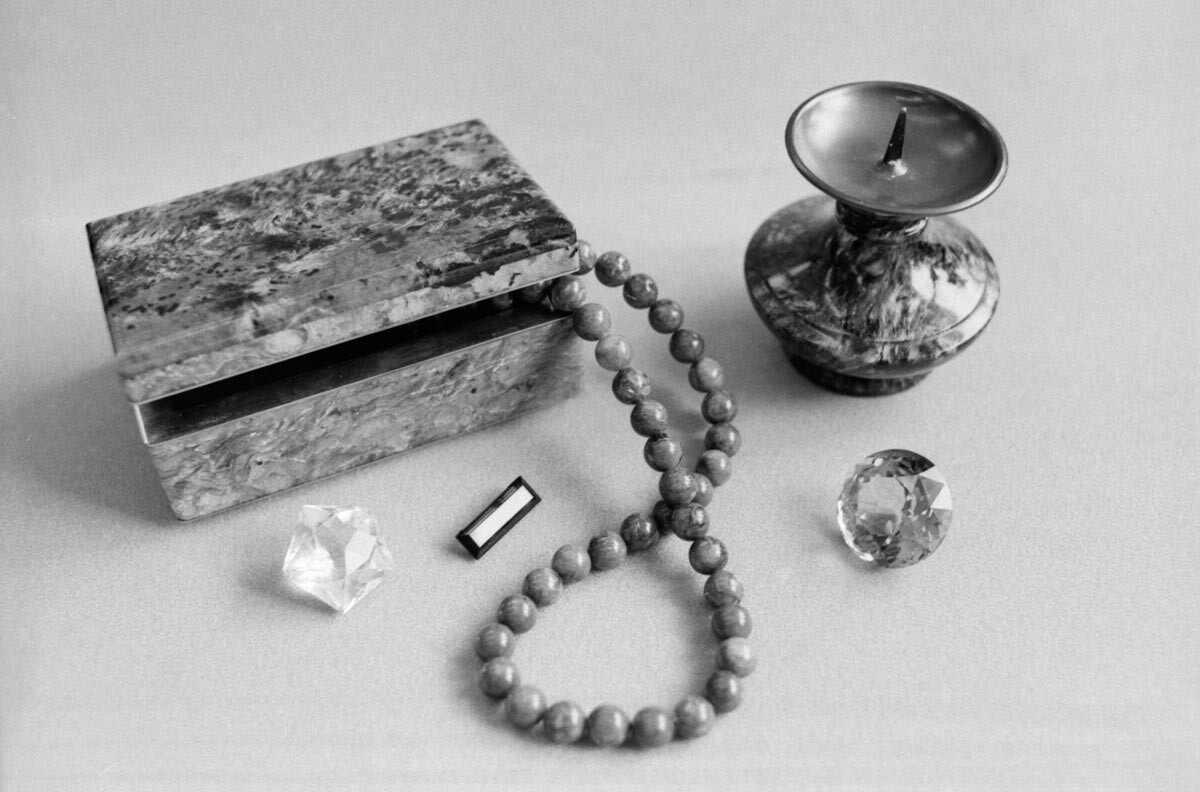 A jewelry box, a necklace and a candle holder made of charoite. 1990.

In fact, no matter how many searches were conducted, no other charoite was found elsewhere in Russia or abroad. The only deposit turned out to be in the Murun massif - which is now named ‘Sirenevy Kamen’ (“Lilac Stone”). It contains more than 20 disconnected charoite deposits scattered over an about ten-kilometer area. 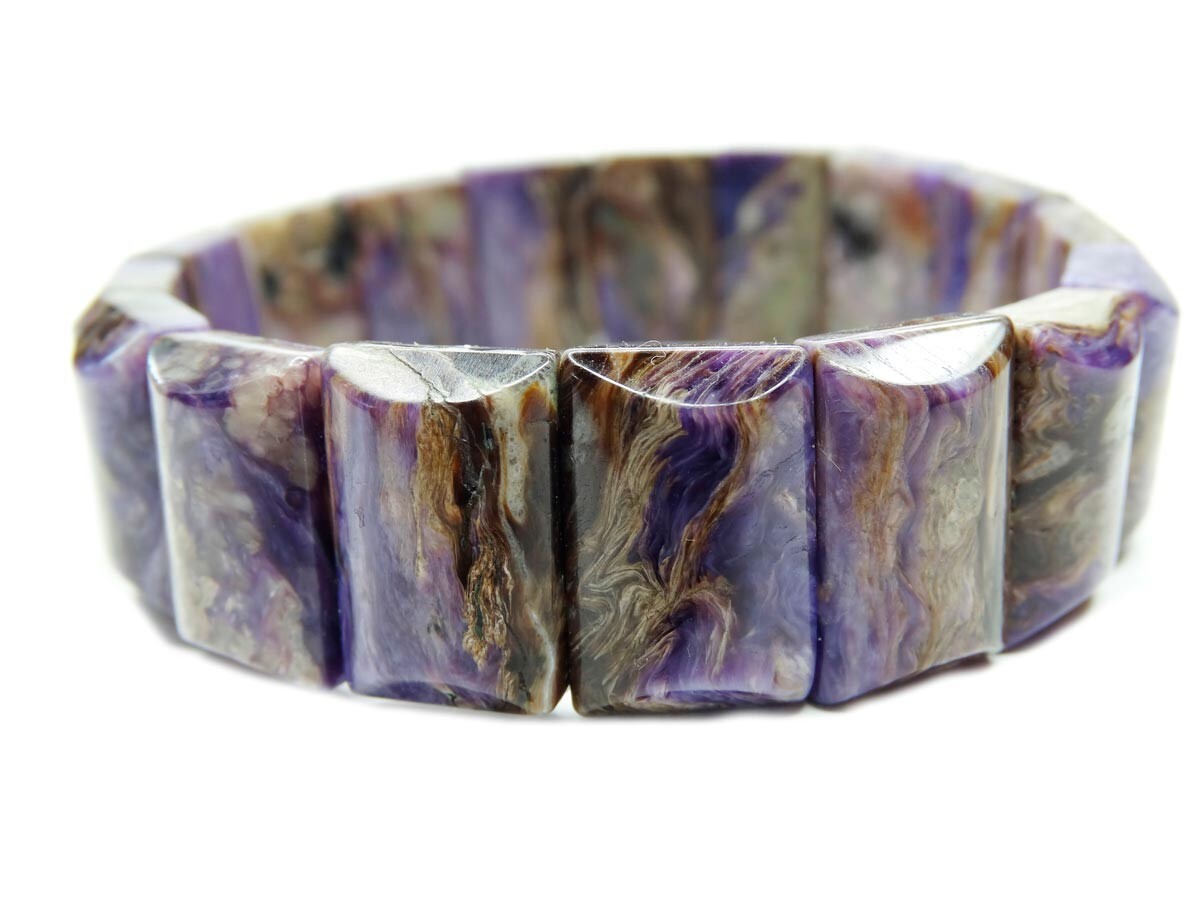 The exact size of the charoite reserve is not established, but it’s estimated at least 140,000 tons. Today, there’s a limit on the charoite extraction in Yakutia - no more than 100 tons per year, but, due to the difficulty of developing these faraway taiga territory, much less stone is in fact extracted and, therefore, it’s not often seen on store shelves. 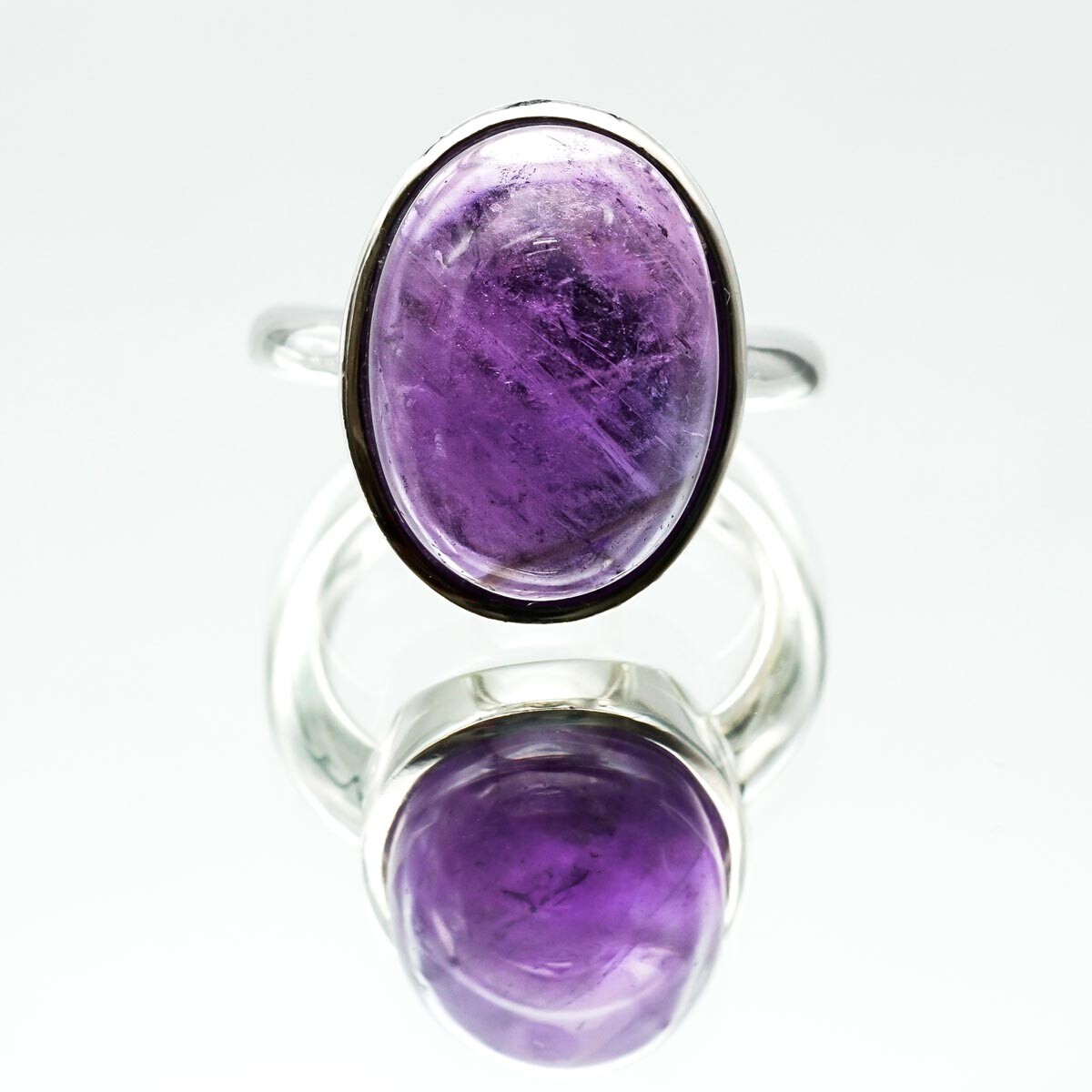 Besides charoite, in 1997, another unique and rare stone was discovered there: blue nephrite, which geologists suggested calling ‘dianite’ in honor of Princess Diana. This, of course, may not be the last geological discovery in Yakutia. 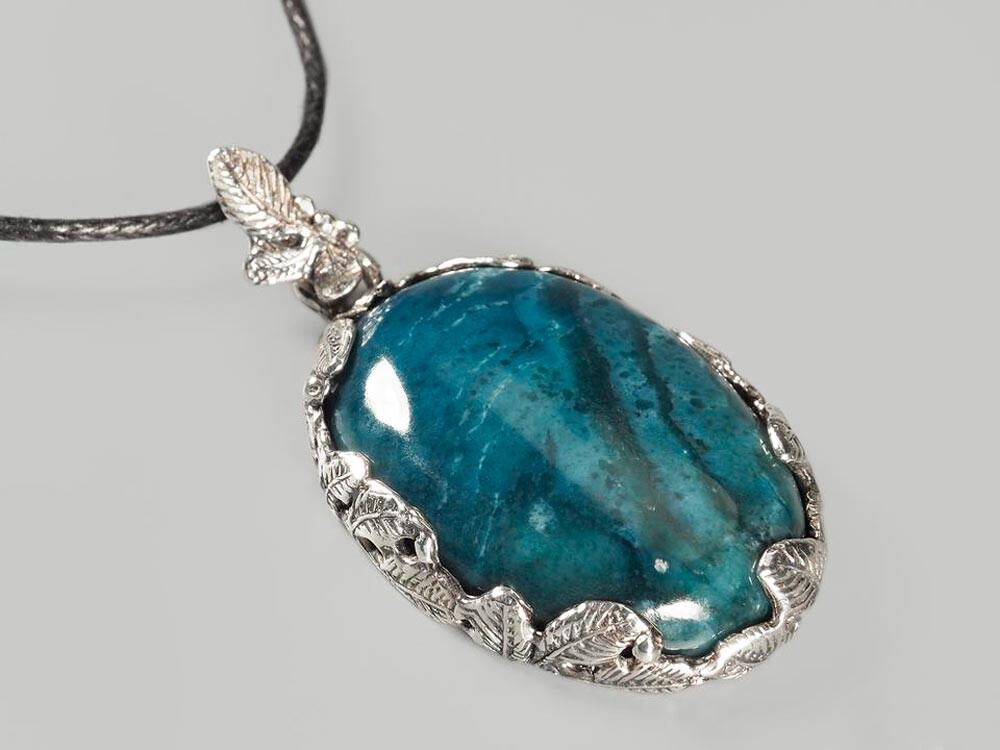