Why did the USSR return Raphael’s paintings and other Dresden masterpieces to Germany? 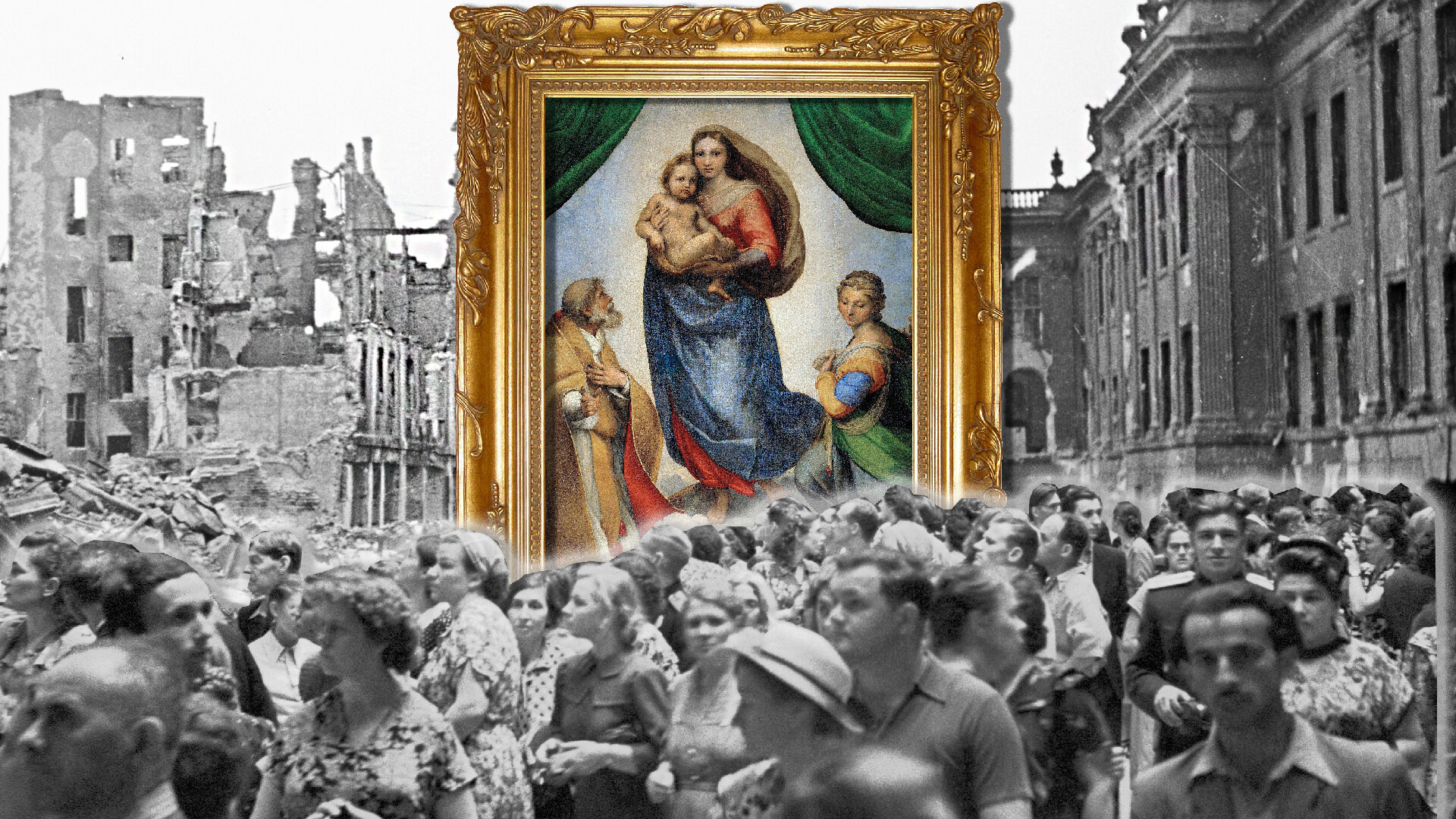 Russia Beyond (Public Domain, Elizaveta Mikulina / Sputnik, Valentin Cheredintsev / TASS)
On May 2, 1955, the Pushkin Museum of Fine Arts in Moscow opened an exhibition of masterpieces taken by Soviet troops from the Dresden Gallery after the Nazis’ defeat. Why did the Soviet people see Raphael’s masterpiece, “Sistine Madonna”, for the first and last time only ten years after the war?

On the night of February 13, 1945, in the closing months of World War II, one of the most devastating aerial bombings in history occurred. In two waves, 773 British bombers pounded the historic German city of Dresden, which had a population of about 630,000. The British night attack on the undefended city was followed by 311 American bombers that hit the area the next day. After such devastating attacks, the city's fantastic baroque architecture, including buildings with famous art collections, lay in ruins. Many art objects stored in the city were irretrievably lost. 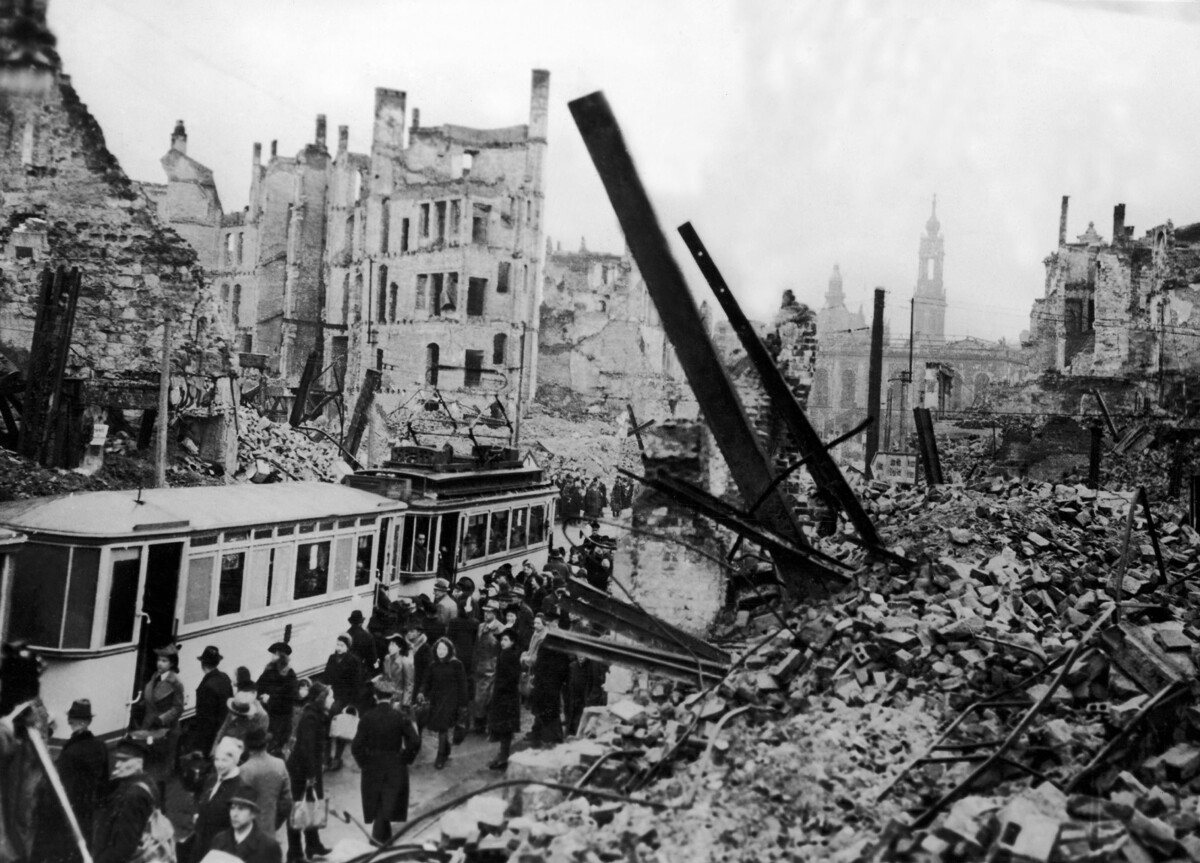 The city of Dresden, basically razed to the ground by Anglo-American bombings, in February 1945

Fortunately, many of the most valuable items managed to survive the war, having been hidden outside of Dresden years before the deadly raids. In fact, starting in 1938, the Nazis began to remove museum treasures from national and regional collectionsand were almost finished by 1943. This “relocation” was Hitler's personal initiative, and his ambitious plans greatly impacted the museum sector.

“The Führer Museum” in Linz

Hitler spent his childhood in Linz, an Austrian town on the banks of the Danube. In 1938, he triumphantly returned to the town after the Anschluss, and planned to create his own super-museum that would include world-famous masterpieces from the museums of conquered territories. The tyrant personally overviewed the compiling of this “greatest art collection in history.” This large-scale operation was called the “Special Mission Linz”, or the “Führer Museum.” 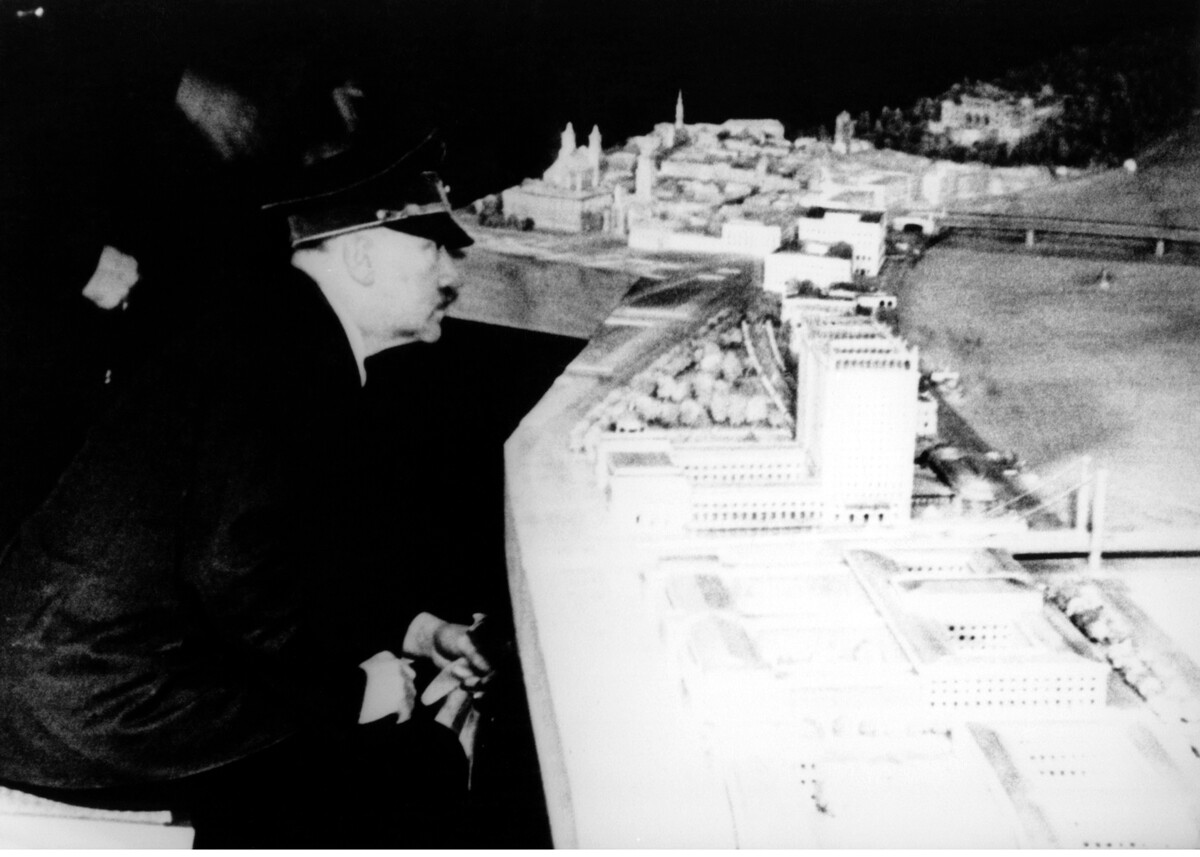 Hitler with a miniature of the modified city of Linz, in Berlin, March 1945

Hitler wanted Linz to be not only the cultural capital of Nazi Germany but of the entire world. According to his plan, it was to be an exemplary “city of arts” that would include an opera house, libraries, cinemas, in addition to an art gallery, a sculptures collection, and much more. The super-museum was so important place for the Führer that its architectural model was kept in his special bunker until his suicide in May 1945.

Hans Posse, director of the Dresden Art Collections and one of the leading art historians in the country, was in charge of compiling the super-museum's collection. What were the methods of building the collection? It would be based on masterpieces from German museum collections. Meanwhile, the state collections of the countries that Hitler referred to as parts of “Western civilization” - for example, France and Austria - were left untouched. 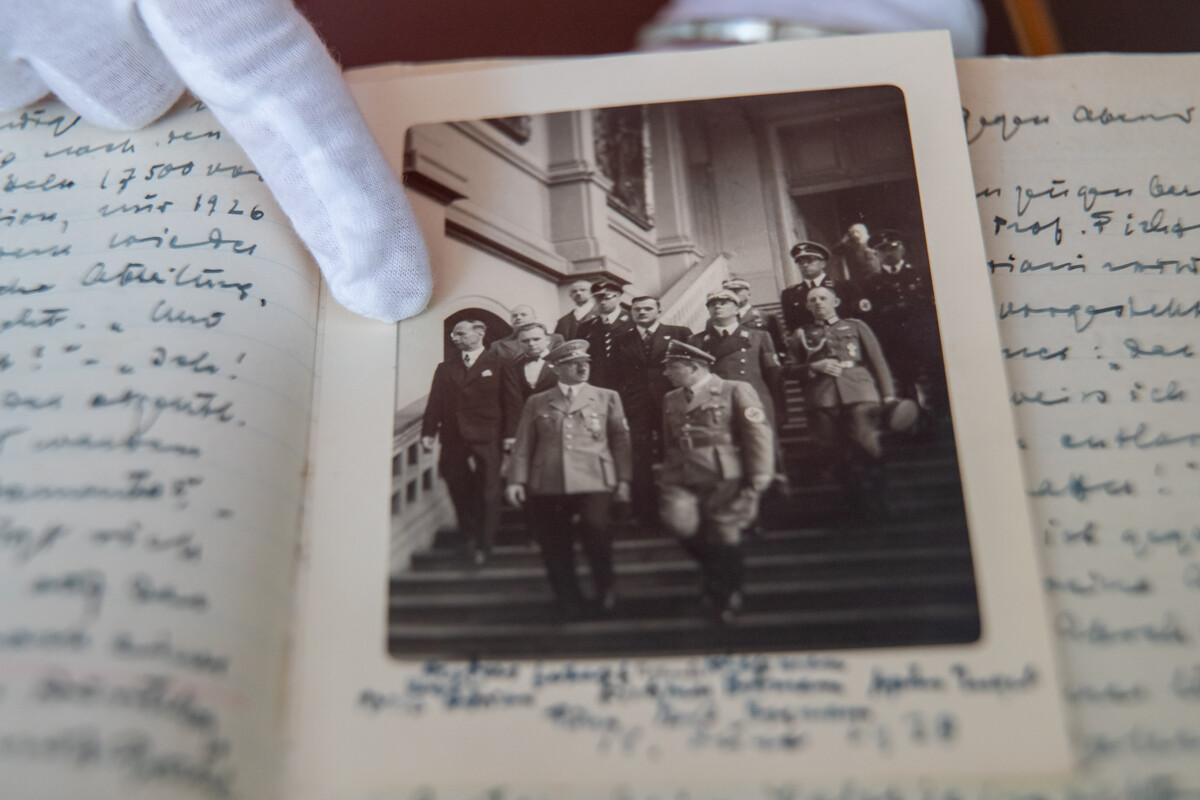 Some of the art works for the super-museum were purchased. However, a large number of them were confiscated from “enemies of the nation” and “inferior peoples,” to which the Nazis classified the Slavs and Jews.

That’s why, even before the outbreak of World War II, the Dresden masterpieces, including Raphael's Sistine Madonna, Titian's Portrait of the Lady in White, works by Vermeer, Dürer, Rembrandt, Holbein, Cranach, and others, were packed up and transported to storage rooms and stashed west of the Elbe.

In May 1945, in a quarry near the village of Grosscotta, a search party under the command of Soviet Lieutenant Leonid Rabinovich discovered a stash of paintings from the Dresden Gallery, including Raphael’s legendary Sistine Madonna. This was not the only find of its kind. 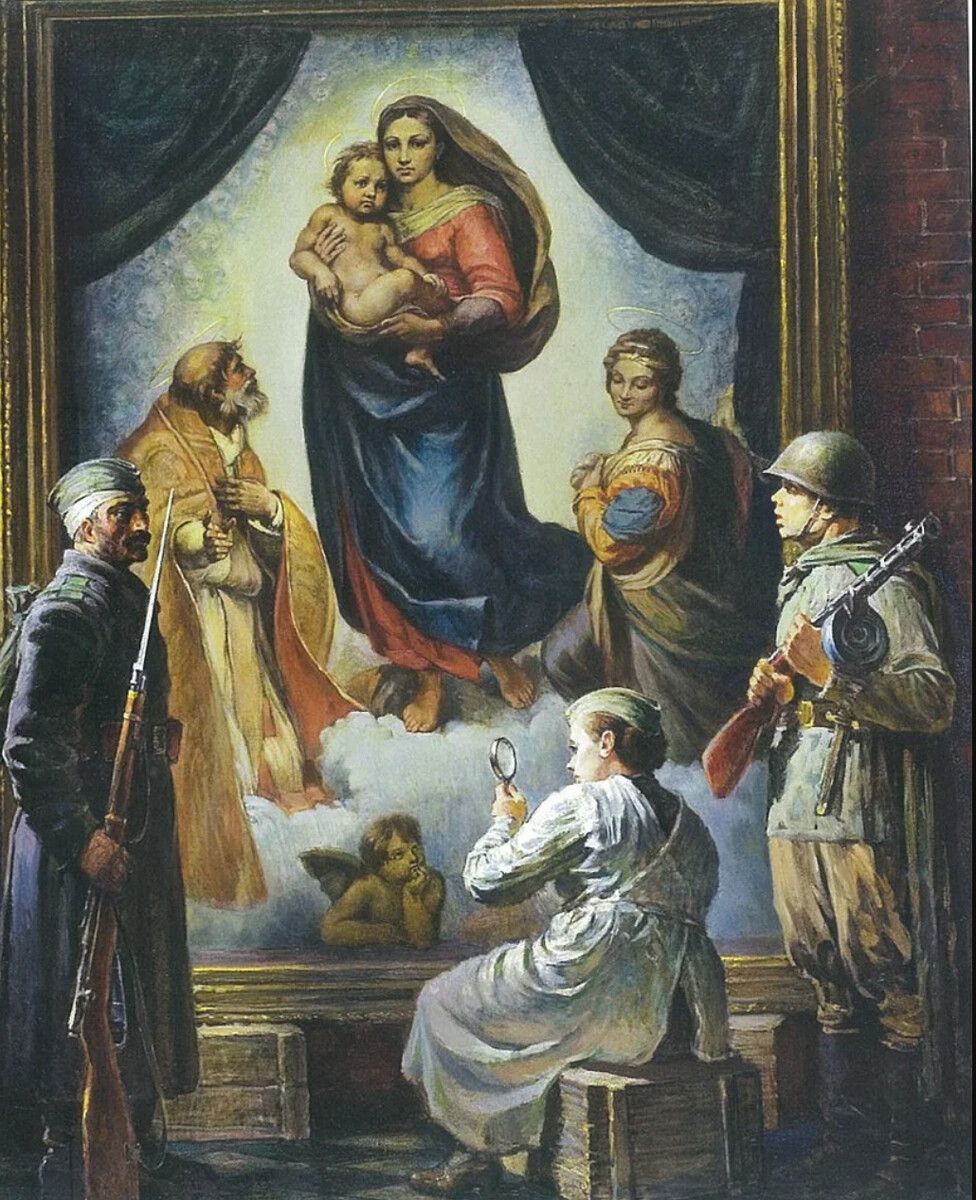 Paintings and other items from several of these stashes were immediately moved to the summer residence of the Saxon Electors in Pilnitz. There, specialists from a special trophy commission inspected the works for damage and prepared them for further shipment to the USSR.

After the war, in 1956 Rabinowitz published a fictionalized memoir, Seven Days (under the literary pseudonym Volynsky), about the search for the treasures of Dresden. Recounting how the box with the Sistine Madonna inside was discovered and opened, the author describes in artistic terms the special attitude of the soldiers of his battalion to it: “...why were people who were unsophisticated in art . . . as if indifferent to what they saw, then . . . would approach and stand before [the paintings] for long periods and leave quietly on their tiptoes?” 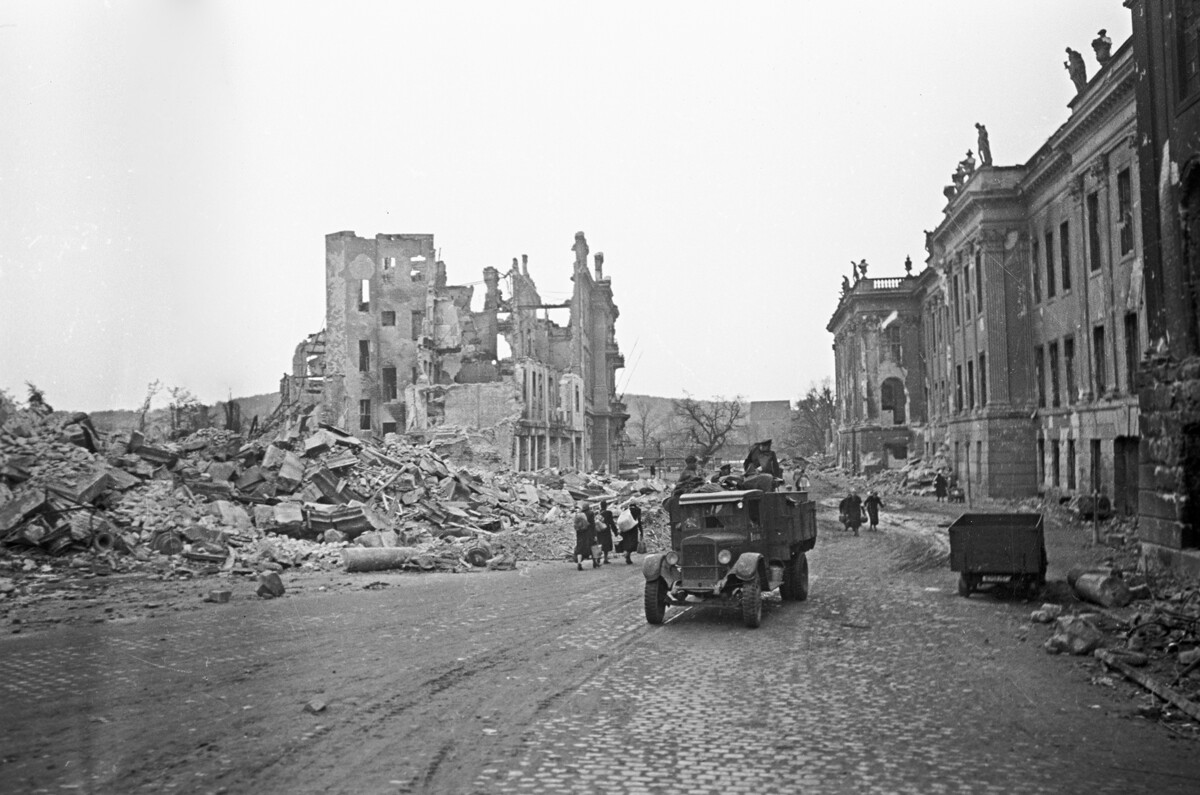 Ruins of the Dresden Gallery, 1945

On August 11, 1945, the Sistine Madonna, together with other works from the collection of the Dresden Gallery, arrived in Moscow at the Pushkin State Museum of Fine Arts. Soon after,  large-scale restoration began.

Initially, returning the Dresden treasures to their homeland was out of the question - the Soviet leadership had planned to add them to the Old Masters collection of paintings in the Pushkin Museum. The famous Soviet art historian Andrey Chegodaev, curator of the museum's trophy fund at the time, wrote the following in his memoirs: “I was ordered . . . to hang the entire art gallery of the museum, mixing our paintings with those from Dresden. At that time there was no question of 'saving' the Dresden gallery; it was considered a trophy.” 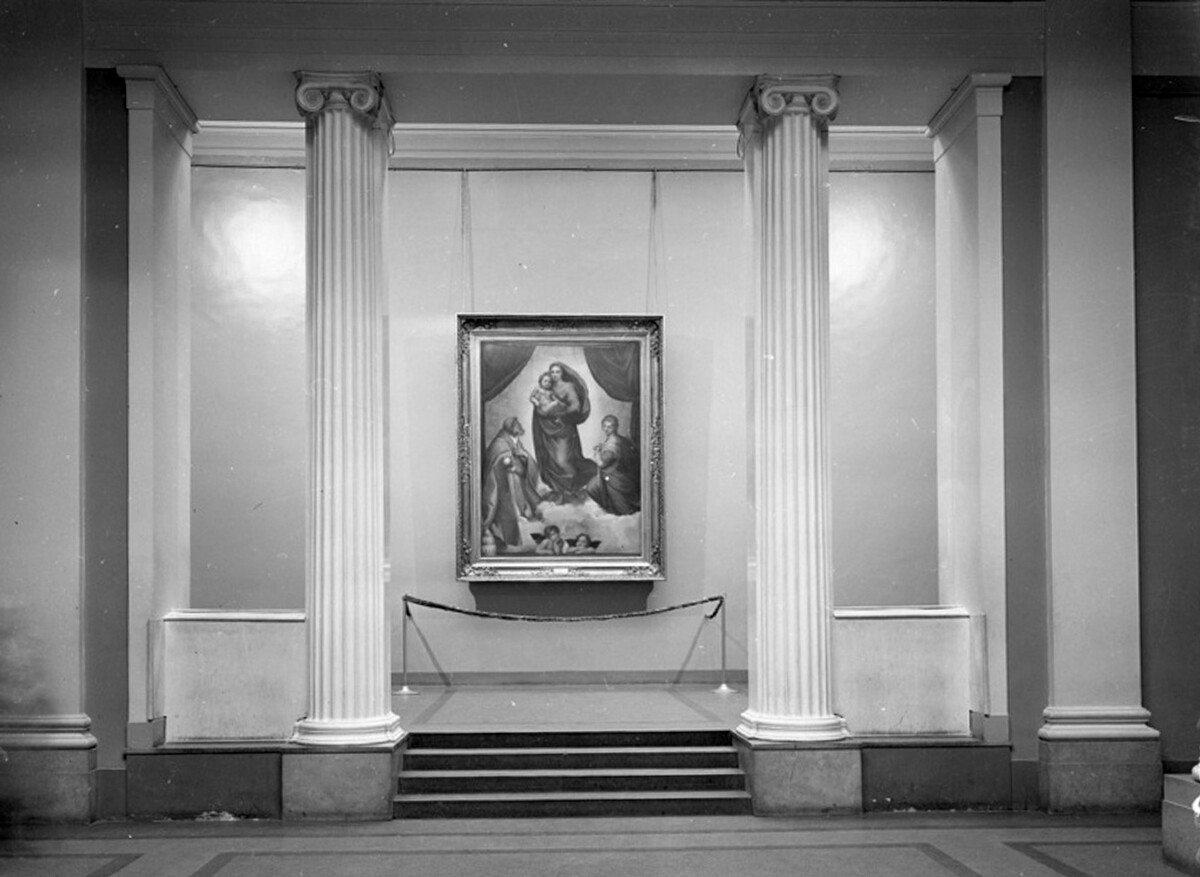 Raphael's Sistine Madonna at the “Masterpieces of the Dresden Art Gallery” exhibition in the Pushkin Museum of Fine Arts, Moscow, 1955

However, just after the installation was completed, someone on high forbade them to be shown to the public. The pictures brought from Germany were ordered to be placed in two halls that were accessible only with the permission of the museum director and only to a select few.

In the late 1940s, Stalin signed a decree forbidding all access to the displaced masterpieces. Only the museum director, Sergey Merkurov, restorers and the curator Andrey Chegodaev had the right to enter the halls where they were kept. “The Dresden Gallery paintings were classified as 'top secret' so that not a single soul could even guess that they were still in the museum,” the latter wrote. 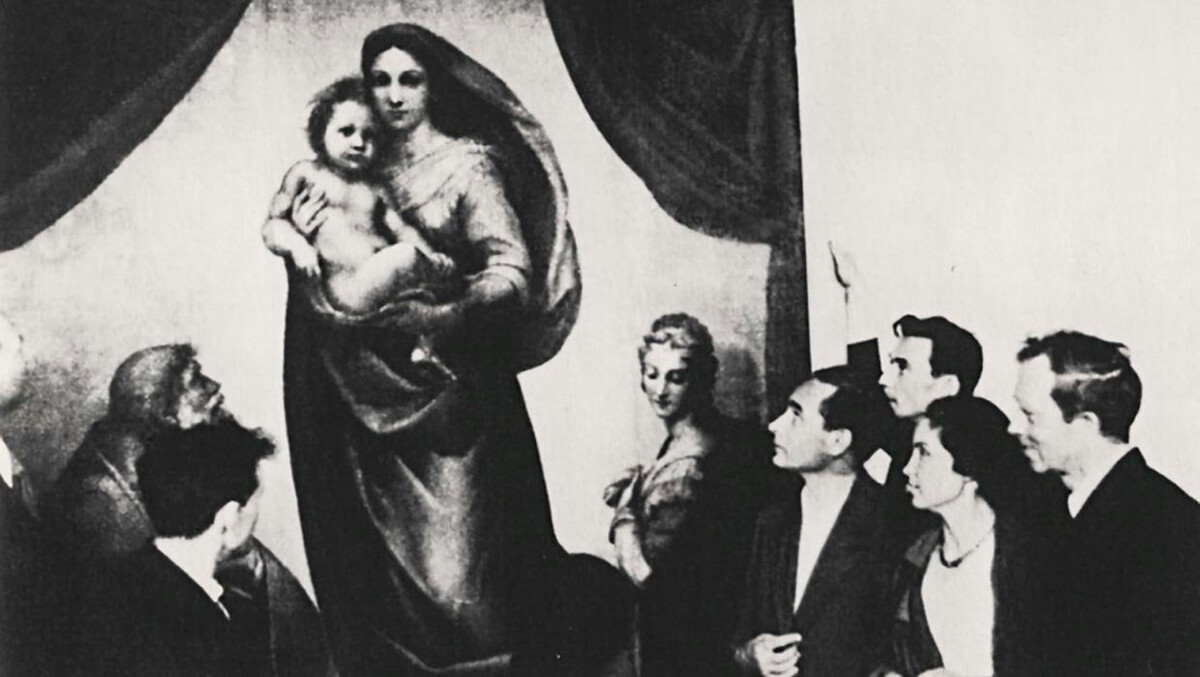 In 1955, the Soviet leadership decided to transfer the collection to the German Democratic Republic. In a note dated March 3, 1955, sent to the Presidium of the CPSU Central Committee, Foreign Minister Vyacheslav Molotov raised the question of the Dresden Gallery paintings.

"The current situation regarding the Dresden Art Gallery is not normal. Two solutions can be proposed on this issue: either to declare the paintings as trophies that belong to the Soviet people and open them to public access, or to return them to the German people as their national property. In the present situation, the second solution seems more correct. The handing over of the paintings to the Dresden Gallery will further strengthen the friendly relations between the Soviet and German peoples and, at the same time, will help to strengthen the political position of the German Democratic Republic."

The Soviet History of the Sistine Madonna

Before their return, the paintings were shown to the general public: the exhibition opened on the eve of the Victory Day anniversary on May 2, 1955. It caused a powerful and sincere response in the hearts of the people who survived the tragedy of World War II. "Thousands of visitors come here every day. People come from other cities to look at paintings by Titian, Rembrandt, Dürer, Vermeer, which previously they knew only from reproductions. People stand around Raphael's immortal Sistine Madonna for a long time," stated an article in the magazine Ogonyok. 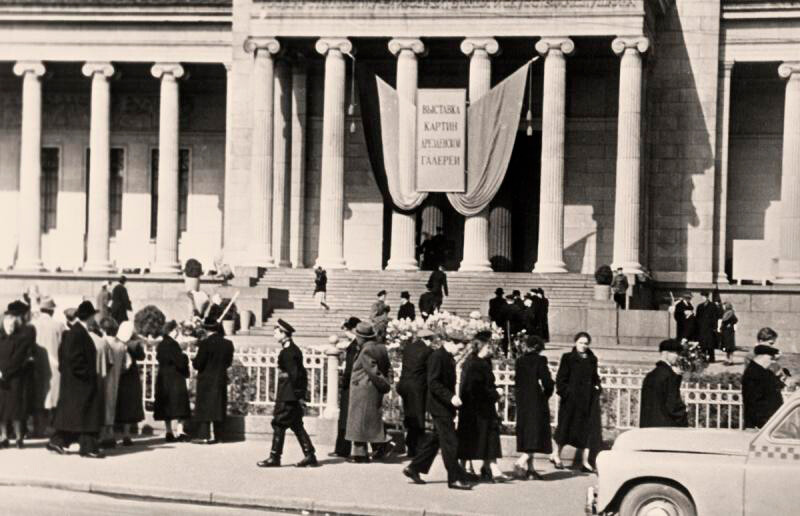 Organizing the exhibition was a major challenge for the museum staff who had survived the war and post-war years. Over the decade that the paintings had been in the museum, Soviet specialists undertook their restoration and comprehensive study. This allowed them to develop an exhibition plan in a short period of time (three and a half weeks), compile a catalog and a brief guidebook, and prepare tours and lectures on the exhibition. Fourteen rooms had to be vacated to display the Dresden canvases, moving more than 2,500 works from the main collection to the storerooms. 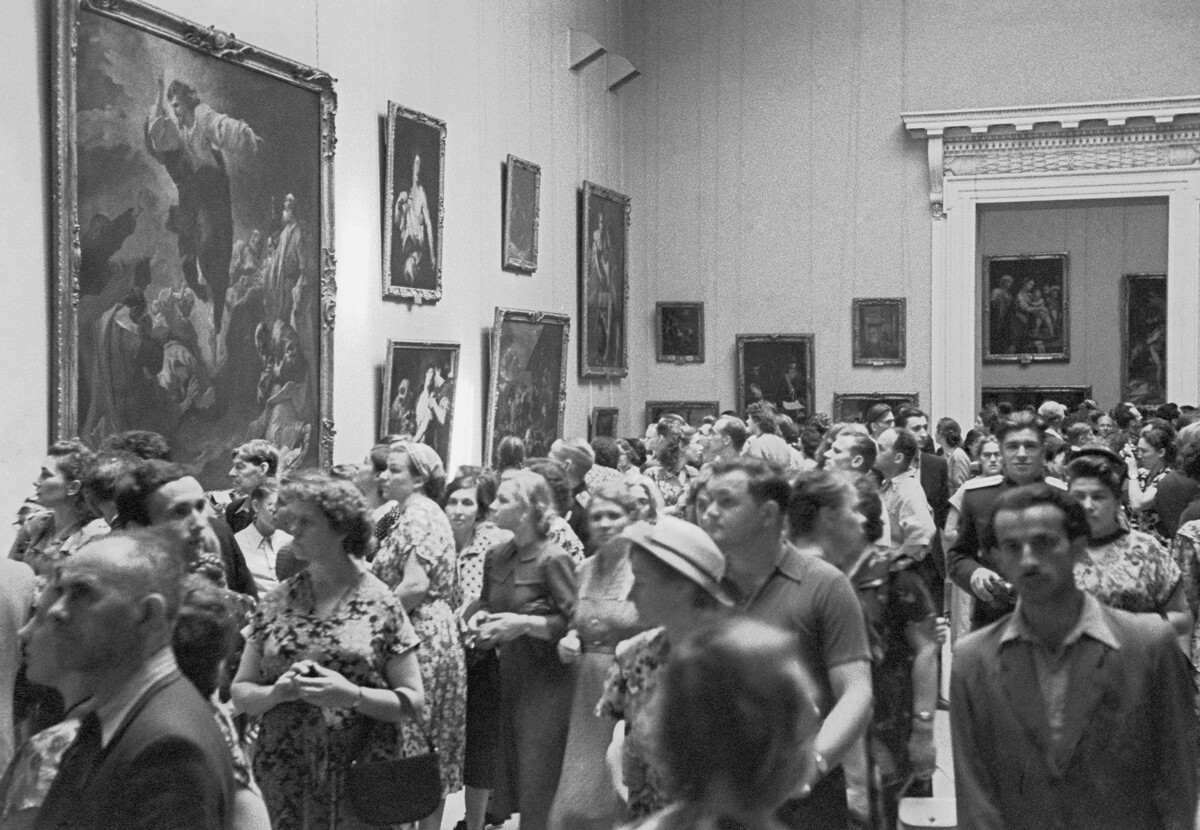 Visitors at the Dresden Art Collections exhibition in the Pushkin State Museum of Fine Arts, 1955

Especially for the exhibition, to meet the incredible public interest, the museum worked 12-14 hours a day, seven days a week. People came from afar, and for the first time the building on Volkhonka was surrounded by hours-long queues. More than 2,000 excursions were held, as were over 1,000 lectures. In four months, 1.2 million people visited the exhibition.

Leonid Rabinovich, who discovered the Sistine Madonna, also saw it again at this exhibition: “Ten years later, going up the marble stairs of the museum in Moscow, I went to it with a heart sinking feeling of impatience, as one goes to visit a loved one after a long separation.” 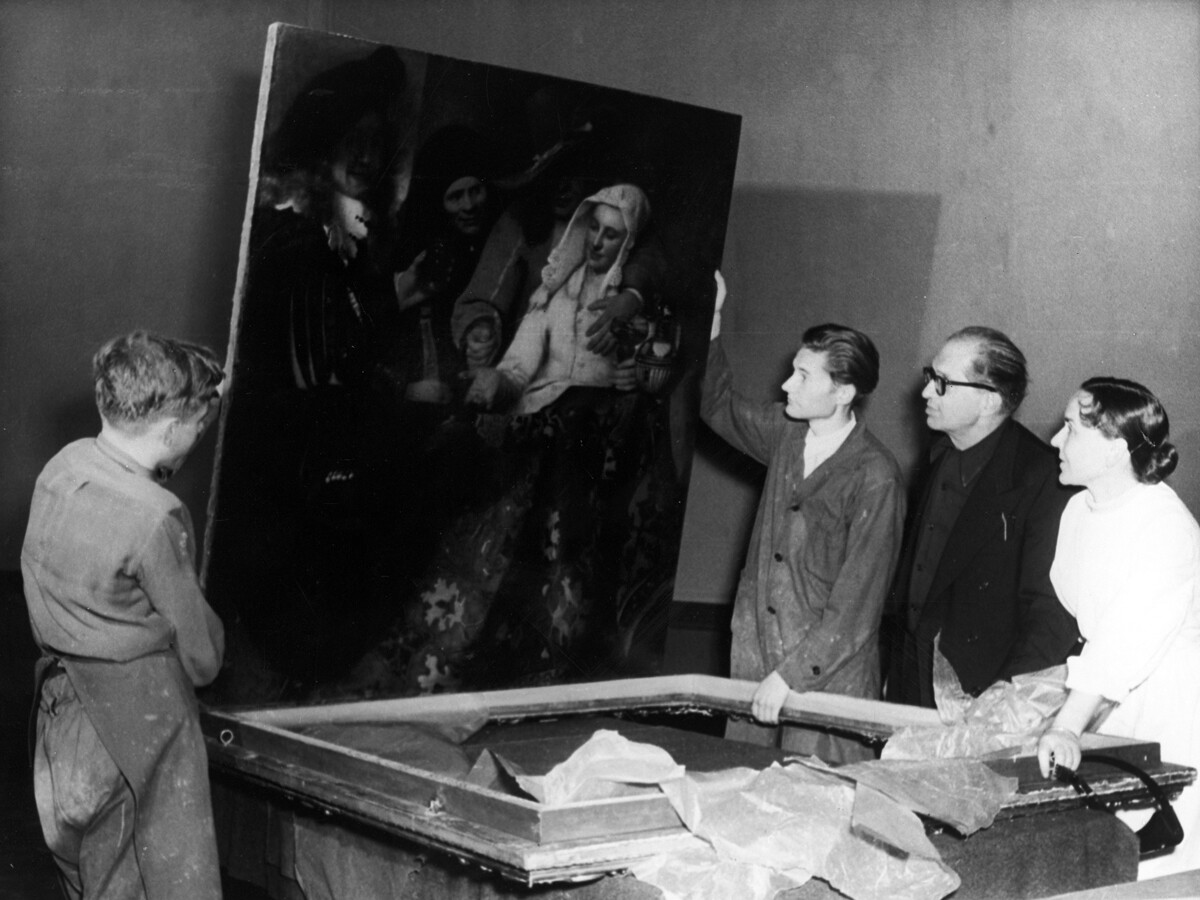 Vermeer's "The Procuress" handing over to the Dresden Gallery

On August 25, 1955, the exhibition was closed and the act of handing over the first painting, Albrecht Dürer's Portrait of a Young Man, was signed. The great art works were leaving Moscow one by one. 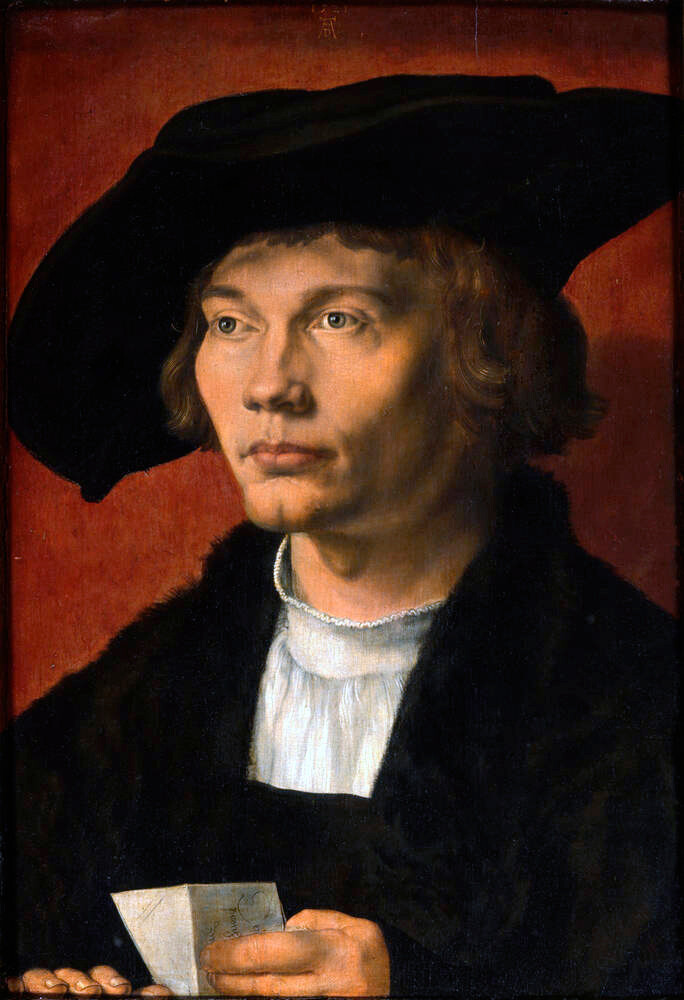 All in all, the Soviet Union transferred to the GDR 1,240 restored paintings and 1,571,995 items of the Pergamon Altar and the Green Vaults Collection.