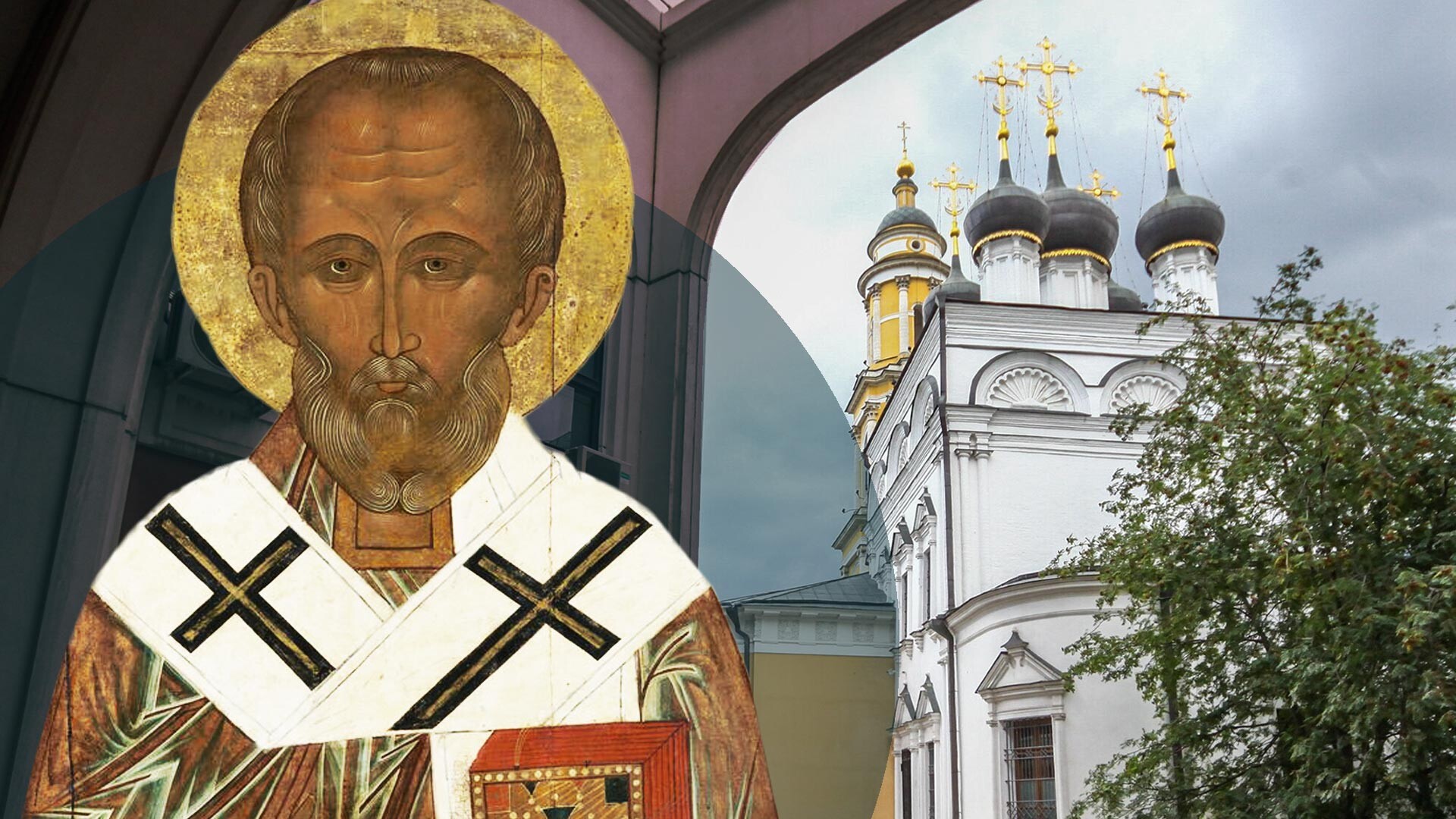 Russia Beyond (Photo: Tretyakov Gallery; Sergei Vedyashkin/Moskva agency)
Russians used to consider St. Nicholas of Byzantium entirely as their own saint. Today, every church in Russia has an icon featuring his image.

St. Nicholas was the archbishop of Myra in Lycia (present-day Turkey), and today he is undoubtedly one of the most venerated Christian saints. He lived at the end of the 3rd and beginning of the 4th centuries and became famous for his pious way of life, a profound knowledge of Holy Scripture (which is why icons often depict him with the Bible in his hands) and his great love and compassion for people.

During his lifetime he performed many miracles to help others: he raised the dead, healed the sick, and saved the dying from starvation. The saint’s kindness and pleasant and kind personality made him extraordinarily revered in literally all branches of Christianity.

In Catholic folklore, St. Nicholas is known as Santa Claus, and in Russia he is called Nkolai the Wonderworker. In Old Russia, this early Christian saint was loved and worshiped as one of their own. He was the one to whom people prayed for help when in trouble, asking for salvation and protection. Apparently, Nicholas helped those who were suffering, because his popularity was quite extraordinary: every single church has his icon or fresco. 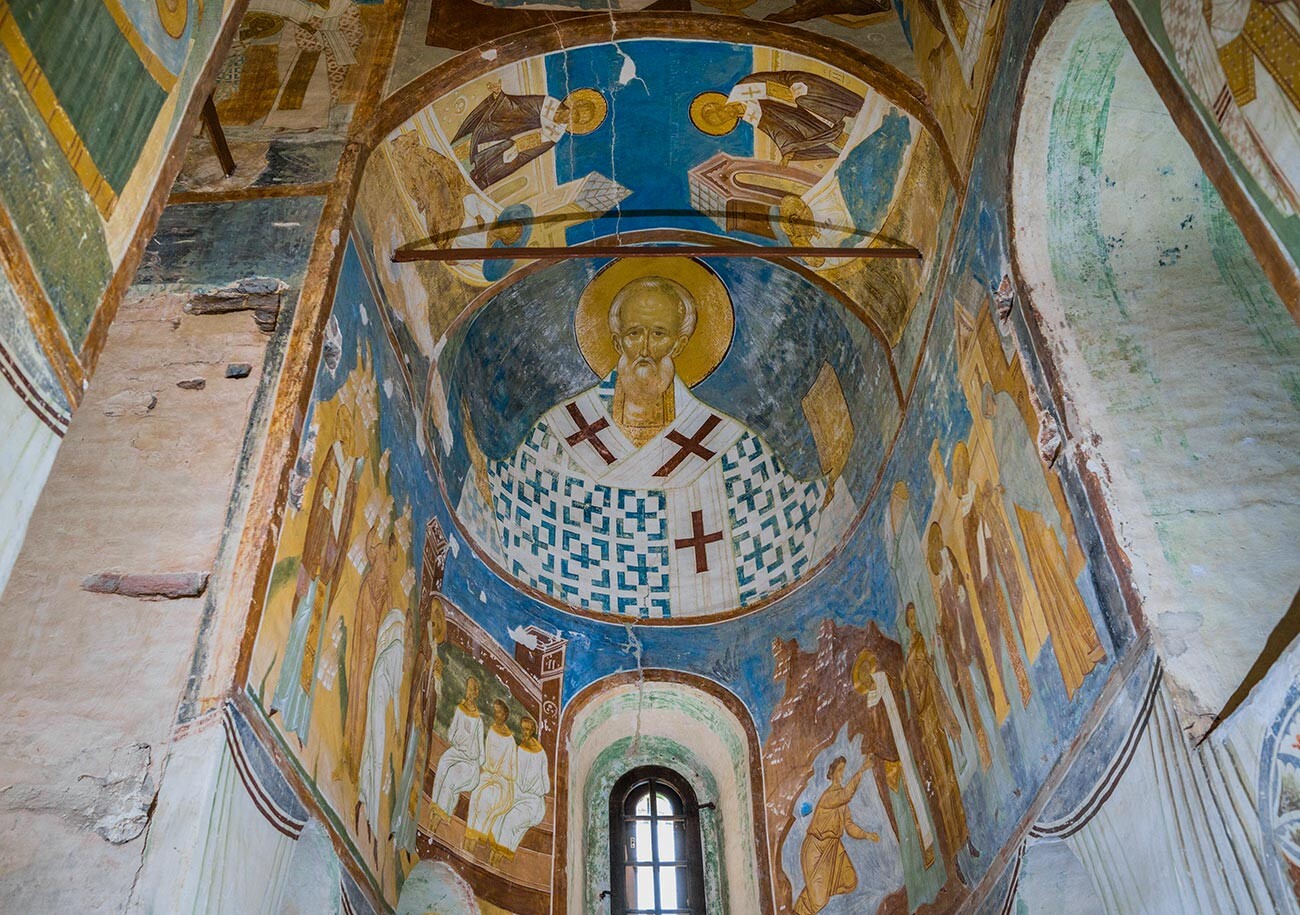 Iconographers throughout Russia have been working on the image of Nicholas since the 13th century. And over the centuries, depending on the iconographic trends and canons, his image and its details have changed, as has the style of painting. Compare below an ancient icon of the 14th century and an icon of the 18th century, in which the strong influence of Western European art and the Baroque style is evident. 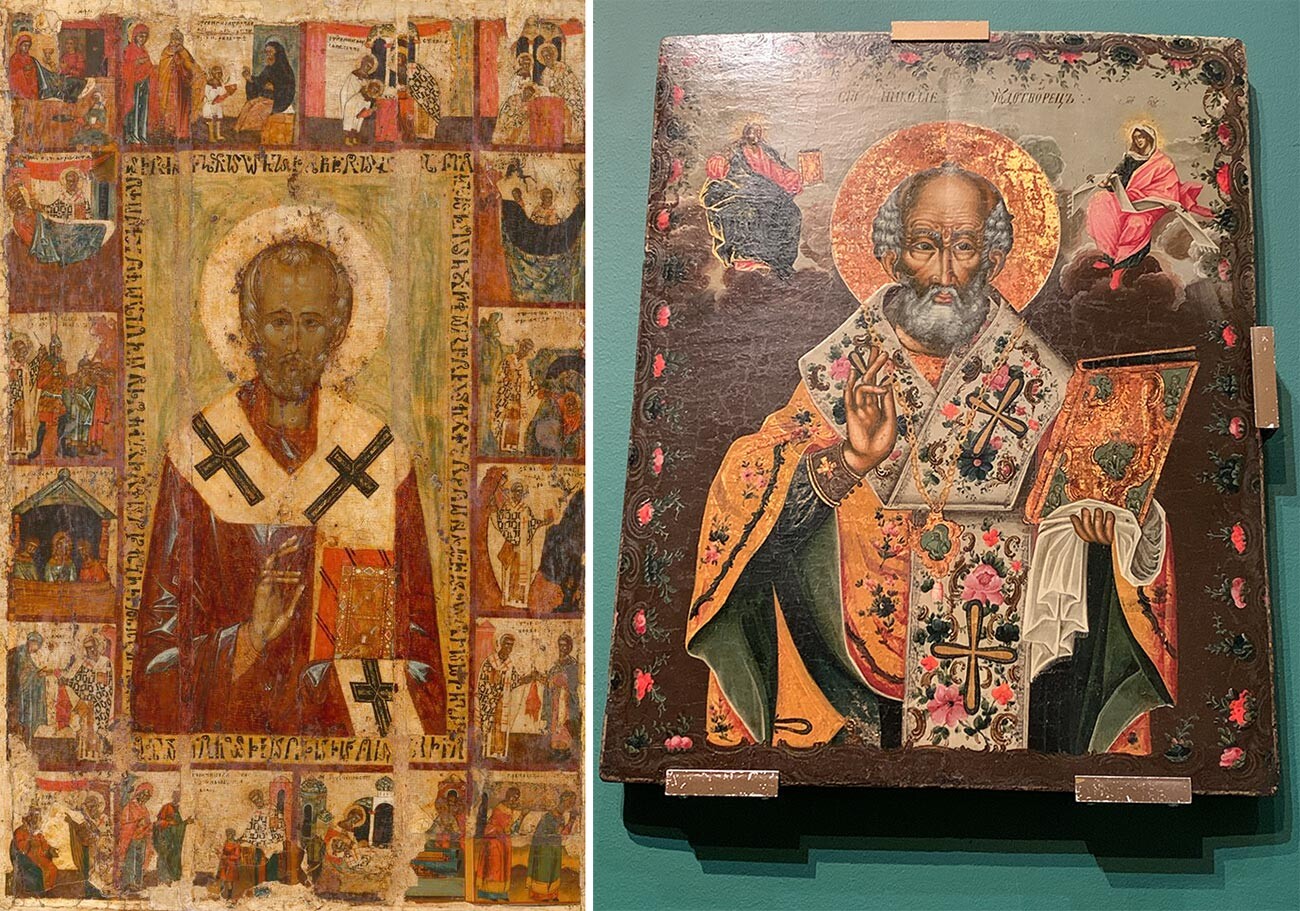 The oldest icons depicting Nicholas were often accompanied by a frame with ‘stamps’ of his life. Iconographers of different centuries and regions were able to add various events. Sometimes the hagiographical images even included stories related to miracles that had already taken place in Russia. 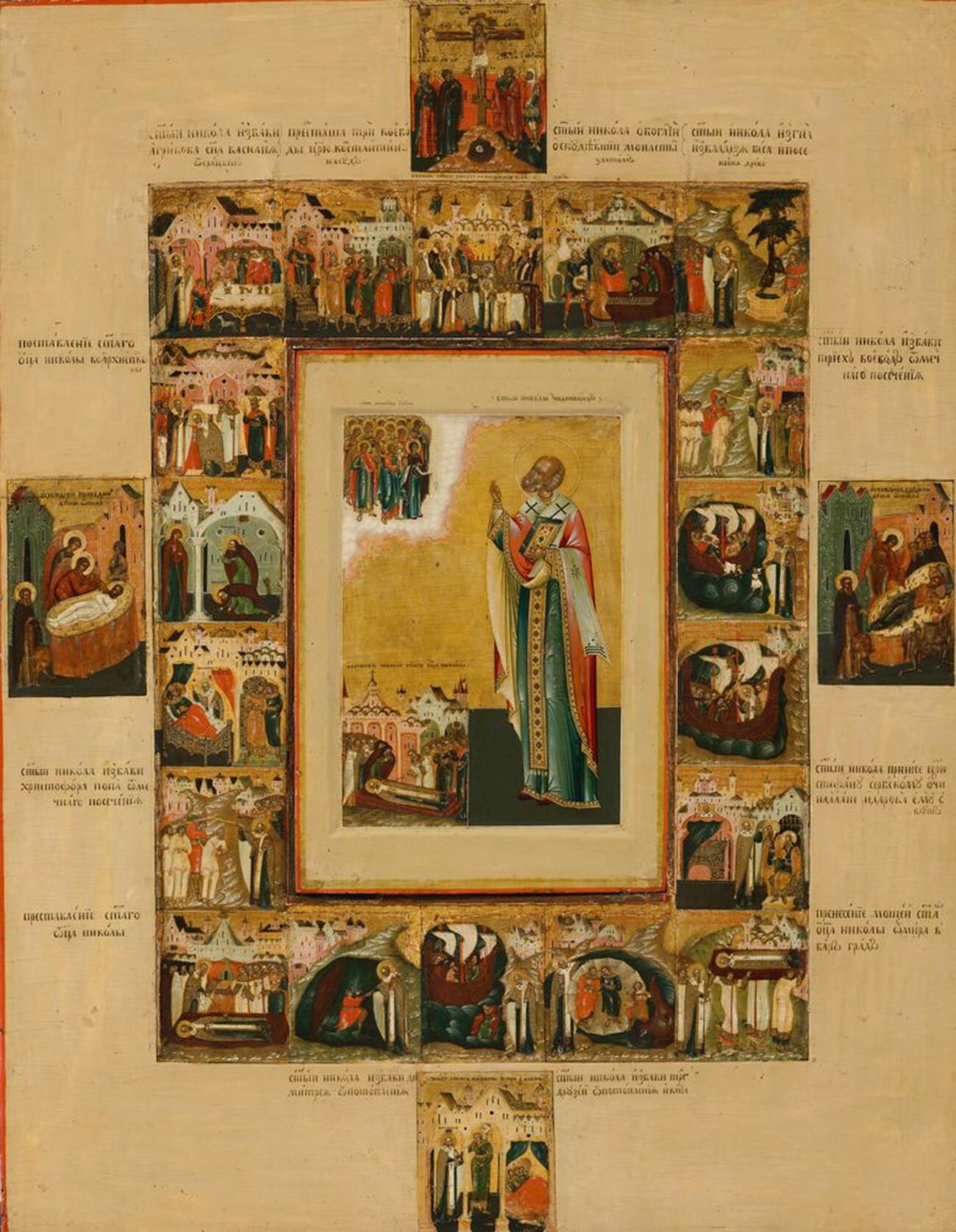 Icons with St. Nicholas could be found in the house of every believer in Russia, right next to images of Jesus Christ and the Holy Mother. The fact that Nicholas was often portrayed on icons along with the Mother of God, Jesus, and other important saints also testifies to the special veneration. 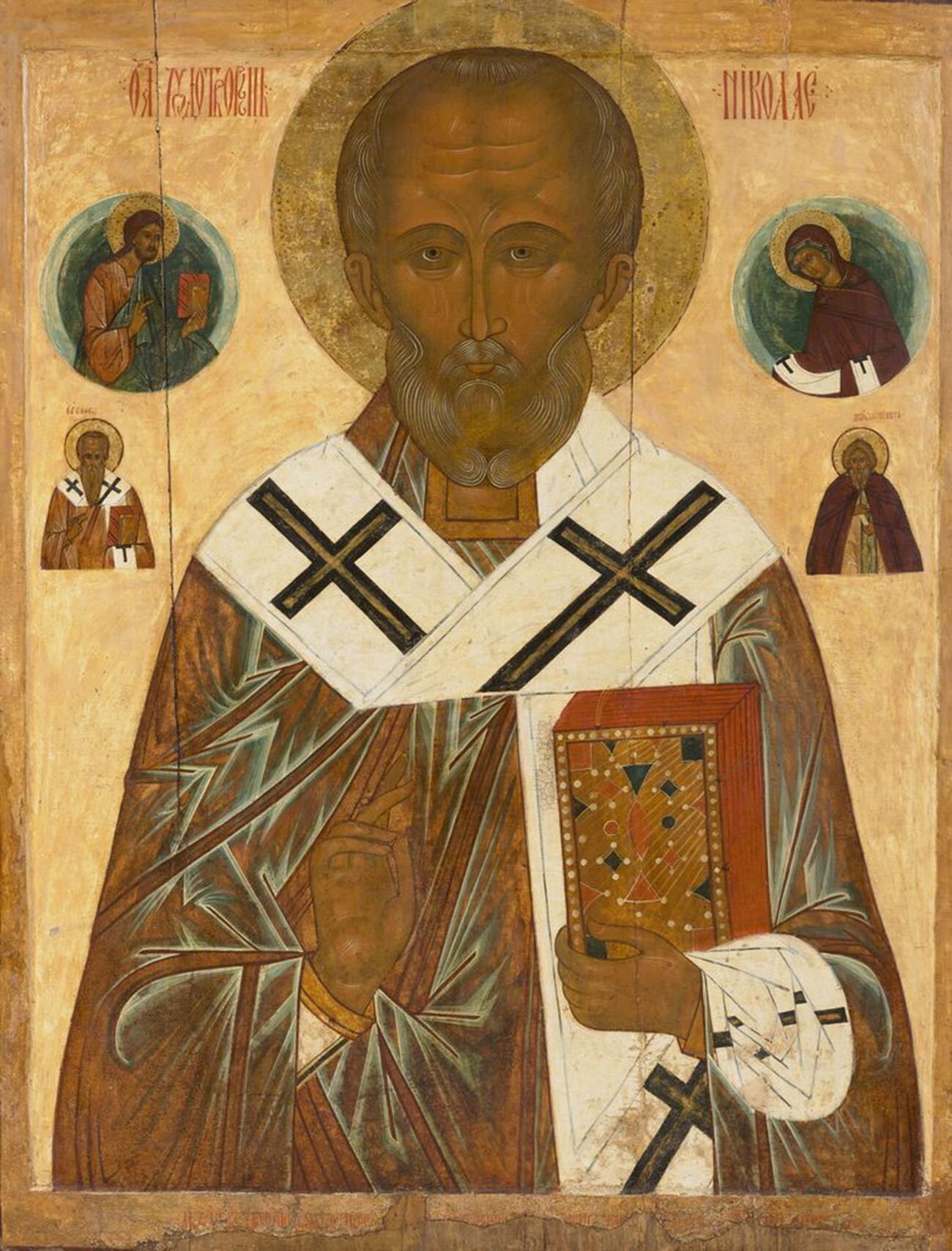 St. Nicholas the Wonderworker in the center, Jesus Christ, Mother of God, St. Blaise of Sebaste and St. Nicetas of Medikion. 1526, Novgorod

The image of Nicholas was also placed on double-sided icons with Our Lady. Like the one pictured below. 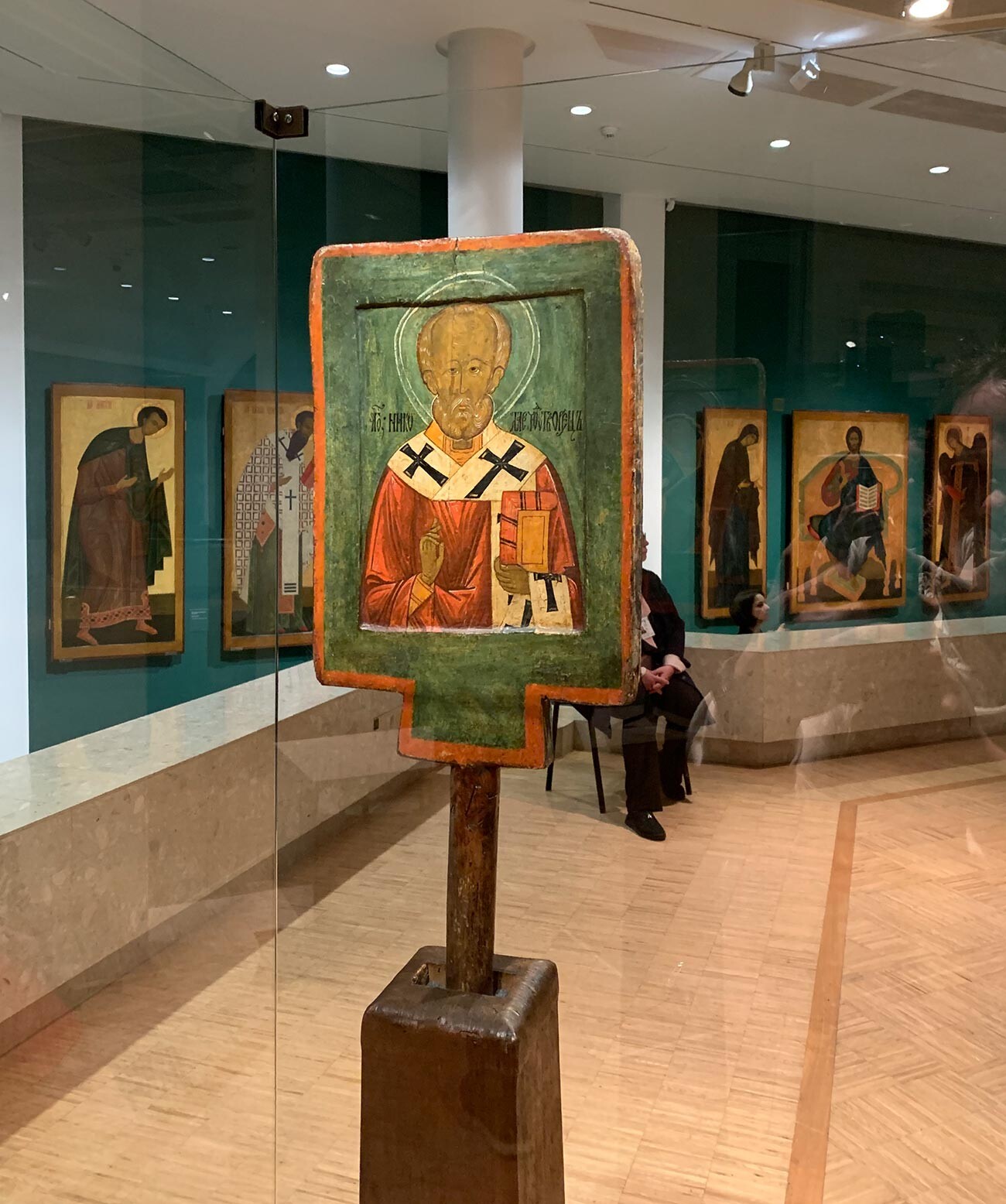 St. Nicholas the Wonderworker. Double-sided icon (with Virgin Hodegetria on the other side). First half of the 16th century.

In the Russian tradition, Nicholas the Wonderworker came to be regarded as a native saint. This resulted in certain iconographic images, or the miracles associated with them, beginning to be venerated and to take on a ‘life’ of their own.

Russian folklore describes such miracles. The first miraculous phenomenon connected with St. Nicholas occurred in Kievan Rus as early as the end of the 11th century. According to legend, while boating on a pilgrimage, pious parents dropped a baby into the Dnieper River and the baby drowned. The grief-stricken couple prayed fervently to Nicholas the Wonderworker - and in the morning, clergy of St. Sophia Cathedral in Kiev discovered a child alive in front of the St. Nicholas icon. Since then, that particular icon has become especially revered and called "Nikola the Wet". The image also began to be dedicated to churches in Moscow.

According to another legend, in the 13th century citizens of the besieged city of Mozhaysk began to pray hard for protection to Nicholas the Wonderworker. Suddenly his image appeared in the sky. He was formidable and in one hand he held a sword, and in the other, as if the city itself. The enemies, of course, were scattered, and in Russia this image became famous. Since then, "Nikola of Mozhaysk" has been depicted in icons and sculptures with a sword and the Mozhaysk kremlin in his hands. There are a large number of similar statues in Russia. Below is one of them. 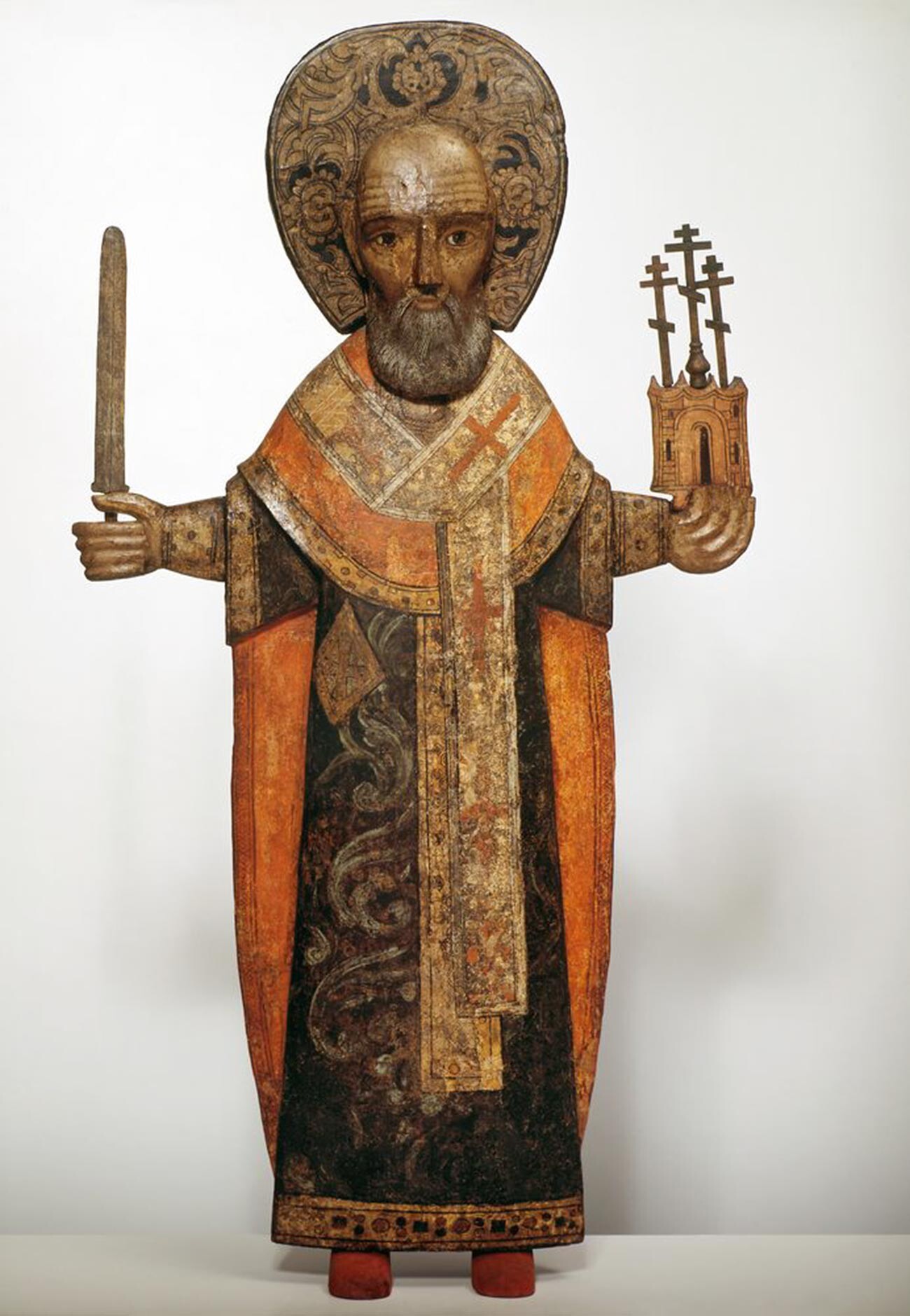 The image of Nikola Velikoretsky (St. Nicholas from the Velikaya River) is also widely known. According to a legend, at the end of the 14th century, a peasant discovered a literally radiant icon of Nicholas on the banks of the Velikaya River (near the town of Vyatka, modern Kirov). It turned out that it was also miraculous - when a local was healed by touching it, inhabitants of all the surrounding villages and towns came to make a pilgrimage. 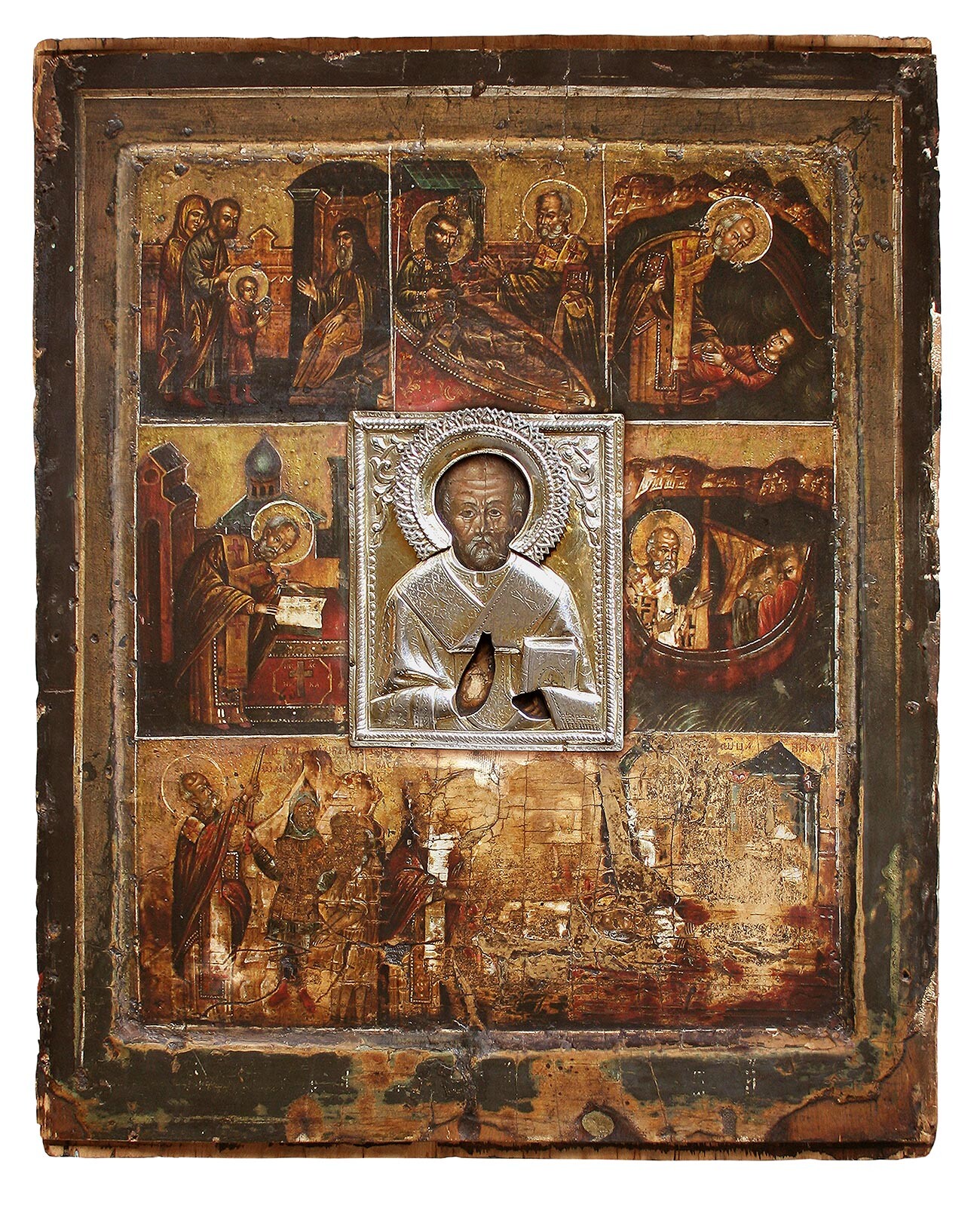 In addition, many cities wanted their own copies and versions of the icons, and the iconographers always added something. The fame of ‘Nikola Velikoretsky’ eventually reached Ivan the Terrible, who contributed a great deal to the spread of the image. (And the iconic St. Basil Cathedral in Moscow even has a chapel devoted to St. Nicholas from the Velikaya River. 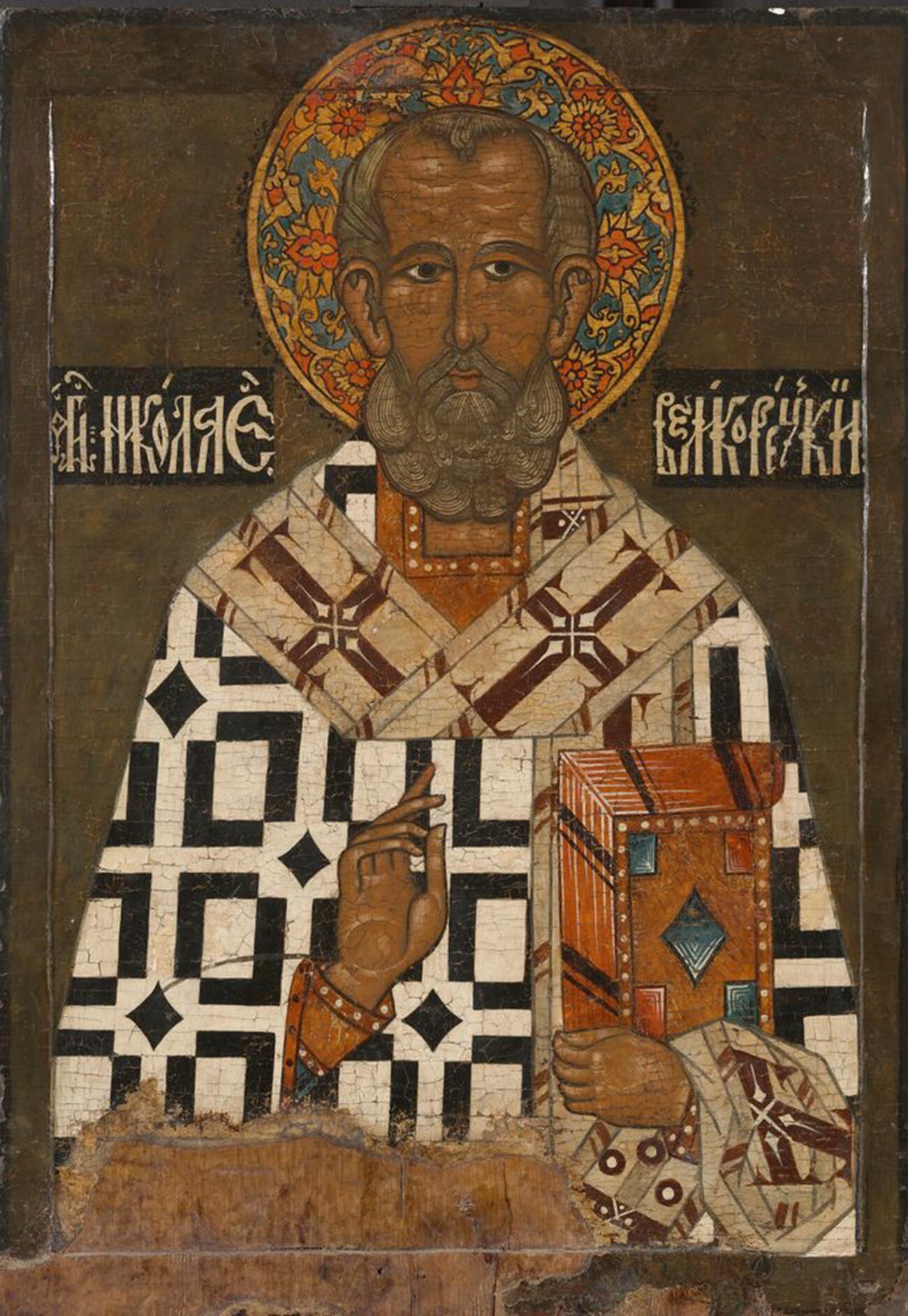 Nikola Velikoretsky's image is always depicted waist-length, with one hand giving a blessing and another holding a Gospel. 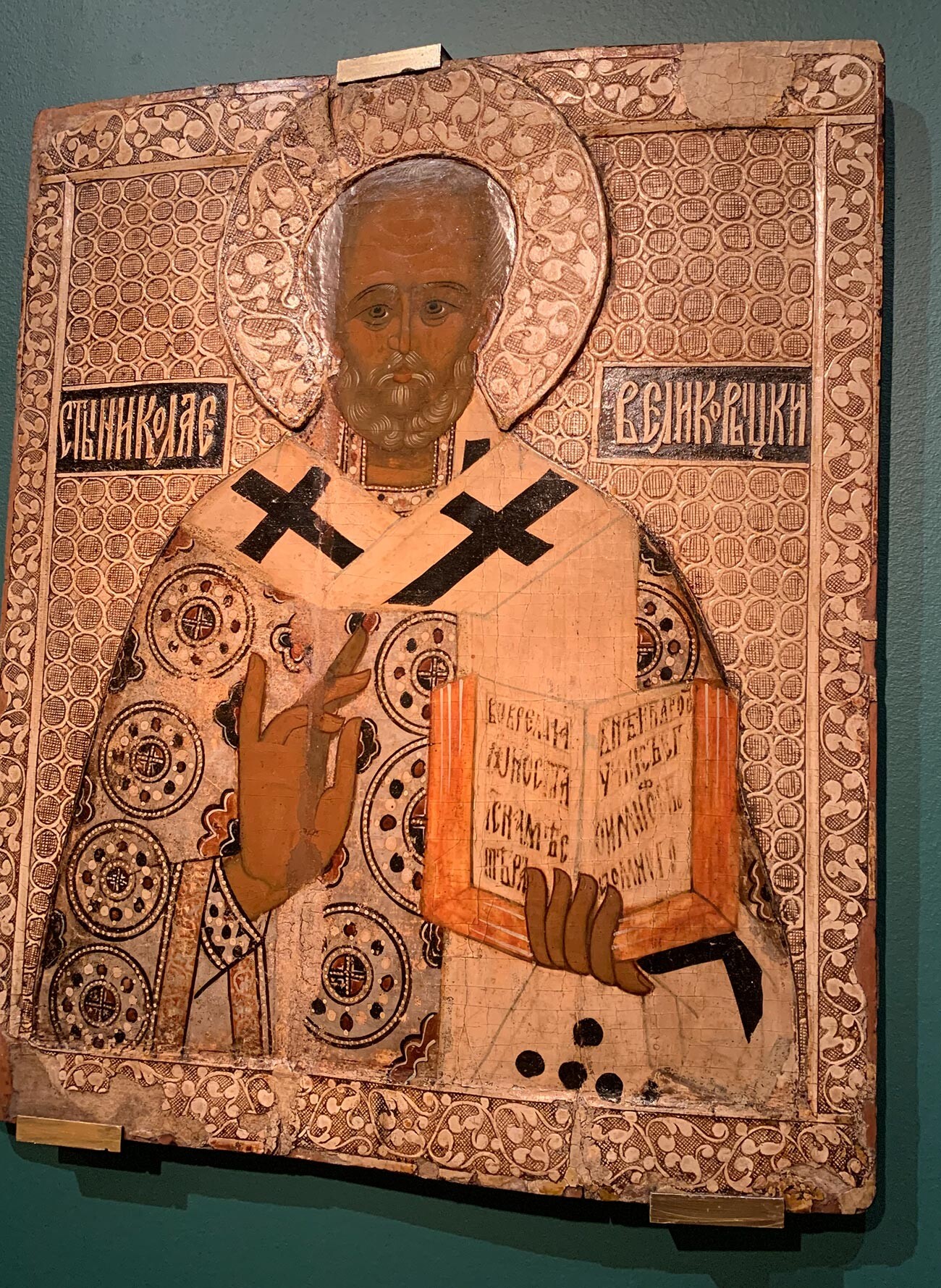 In Russia the holiday "Nikola Veshny" (St. Nicholas of Spring) was widely celebrated, officially it is called the Translation of the Relics of Saint Nicholas from Myra to Bari. This event occurred in the 10th century, when crusaders took the tomb with the miraculous relics of St. Nicholas from Myra in Lycia and transported them to Bari (modern Italy) in order to save them from the Turkish invaders. Numerous icons depict the journey of the tomb with the relics, and how it was greeted in Bari. 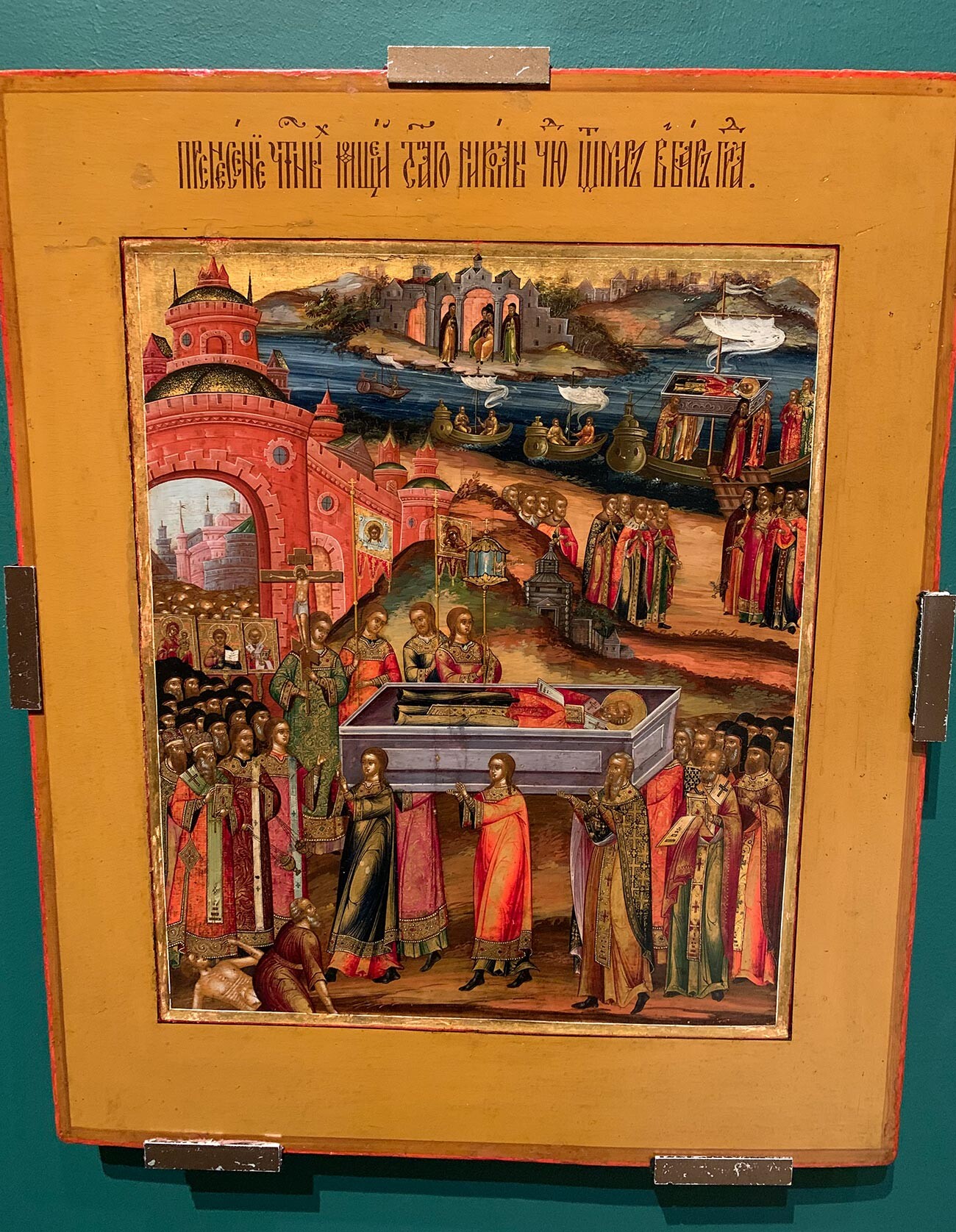 Translation of the Relics of St. Nicholas from Myra to Bari. 1847. Palekh

Another image of the revered saint in Russia is called "Nikola of Zaraysk," and a whole cycle of novelas in ancient Russian literature is devoted to it. 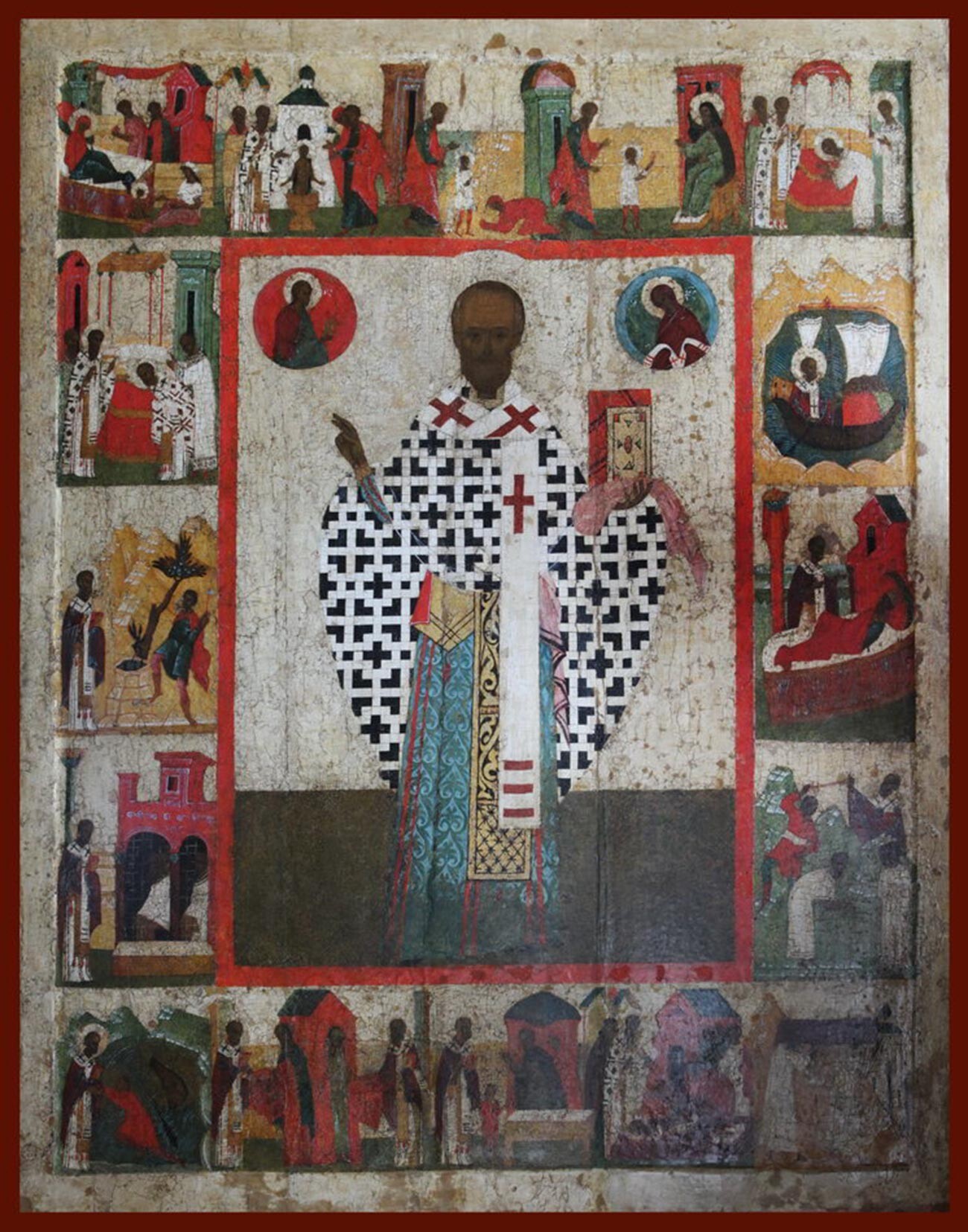 Nikola Zaraysky (St. Nicholas of Zaraysk) from the Nikolskaya church in Zaraysk

There are also many copies of St. Nicholas of Zaraysk. He is always depicted full-length, with a closed Gospel and a gesture of blessing. 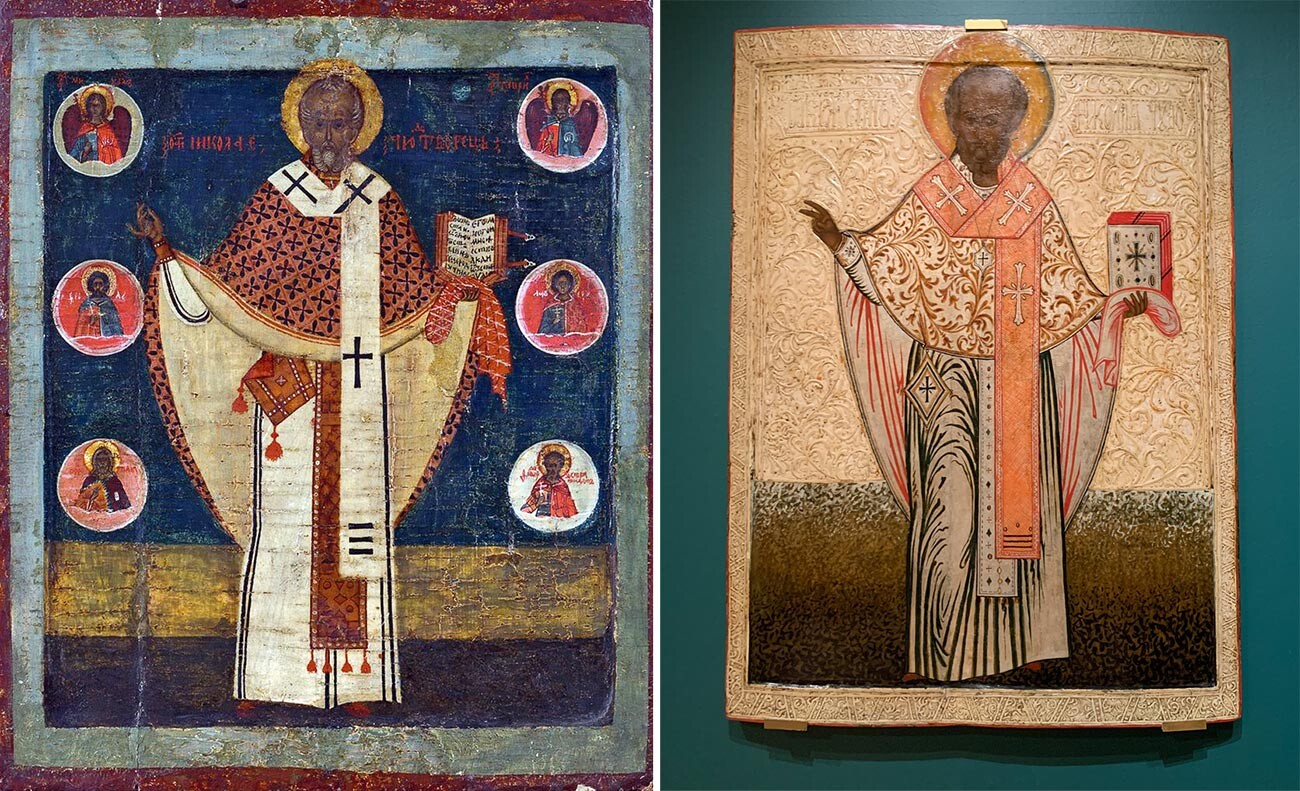 The images of St. Nicholas the Wonderworker occupy a special place in the collection of the Tretyakov Gallery - and for good reason. A version of Nikola Zaraysky's image is closely related to Pavel Tretyakov, the founder of the gallery, who was born in a house next to the Church of the Blessed Virgin's Nativity in Golutvin, where there was a chapel dedicated to St. Nicholas. It had a unique icon of Nikola Zaraysky painted by the Kremlin iconographer Tikhon Filatiev, and which is notable for its subtle Byzantine landscapes in the background. 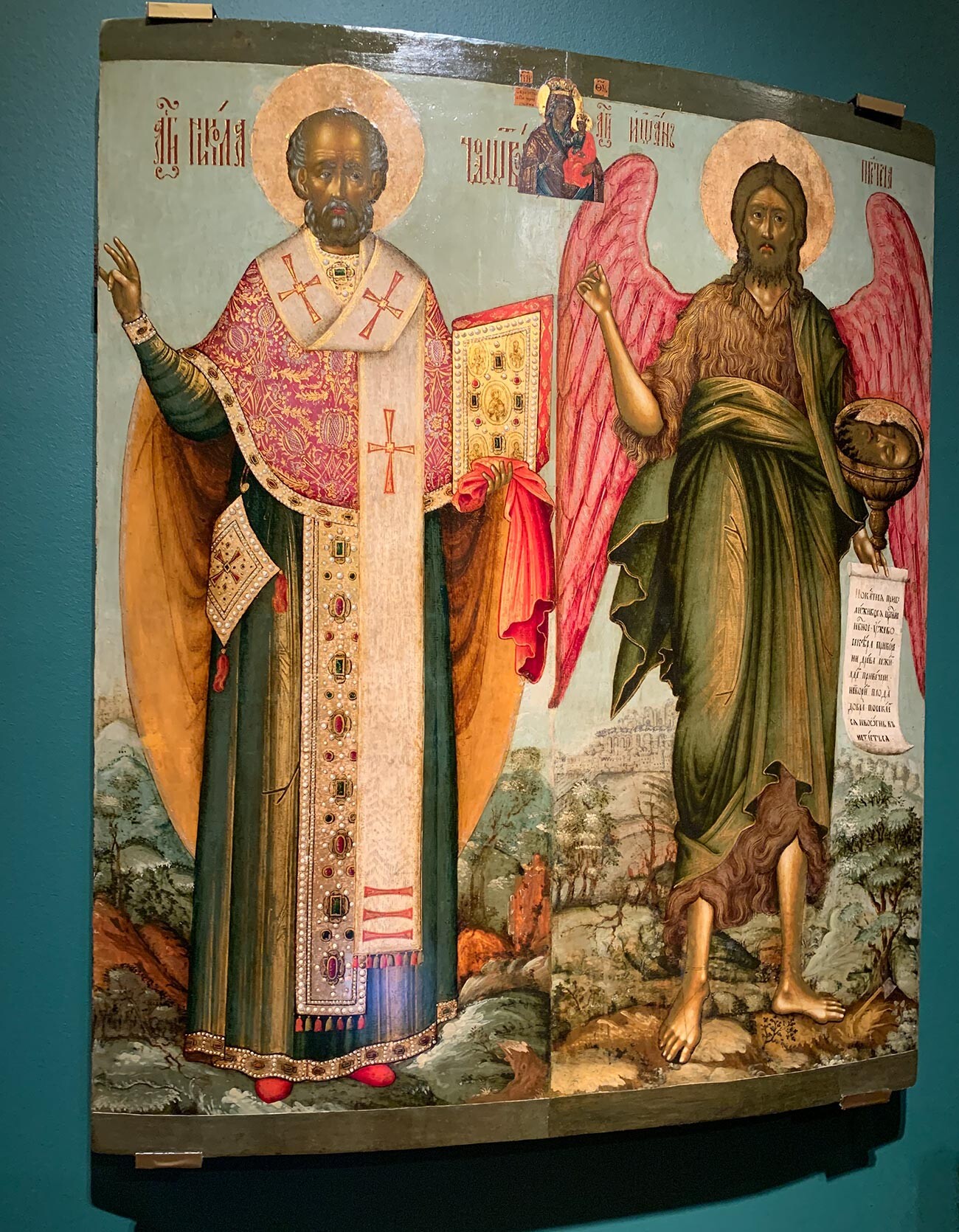 Later Pavel Tretyakov was a parishioner of the Moscow Church of St. Nicholas in Tolmachi, and he built his gallery right nearby. Today, the church is considered the ‘home church’ of the Tretyakov Gallery, and the most important Orthodox icons are kept there: Andrei Rublev's "Holy Trinity" and the "Vladimir icon of the Mother of God”. There is also, of course, an icon of St. Nicholas. 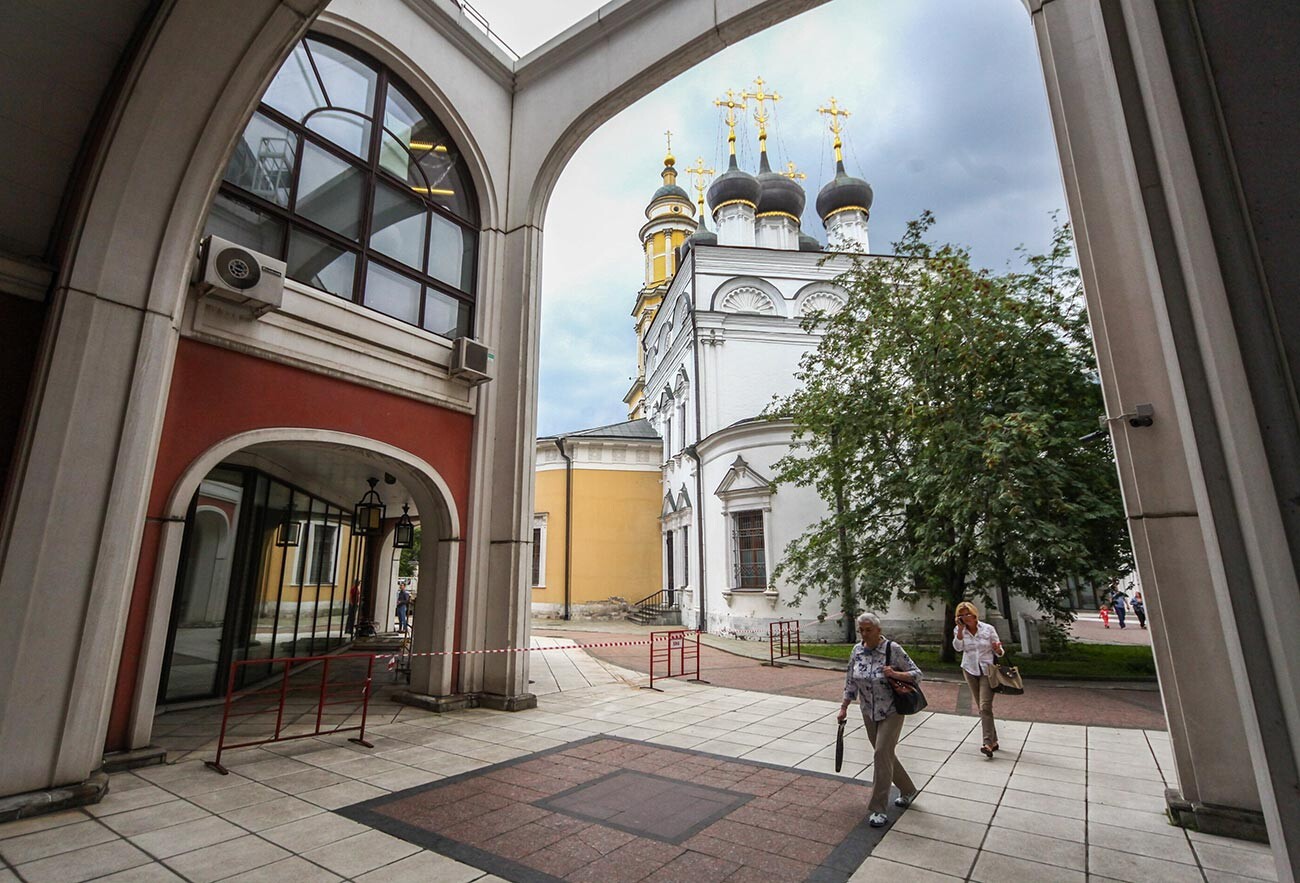 Church of St. Nicholas in Tolmachi

“Saint Nicholas the Wonderworker. Icons of the 13-20th centuries” exhibition is on display at the Tretyakov Gallery until August 28, 2022.