INSIDE the most beautiful Russian mosques (PHOTOS) 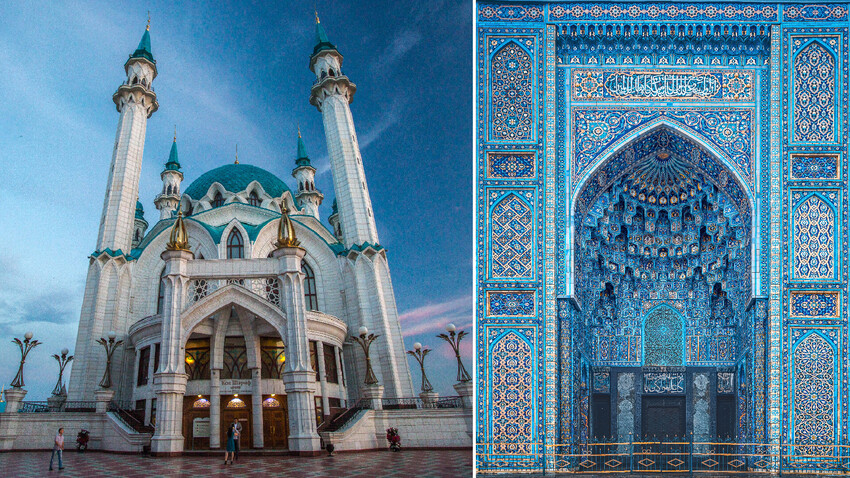 Egor Aleev / TASS, Margarita Zakaryan (CC BY-SA 3.0)
Islam is the second most widespread religion in Russia. And its territory is dotted with a great many mosques. Chechnya alone has more than 1,200! We’ve selected the most majestic here - not only from the outside, but from the inside as well.

This is the tallest mosque in all of Eastern Europe, with minarets measuring 78 meters. It’s located in Moscow, next to the Olimpiyskiy Stadion. 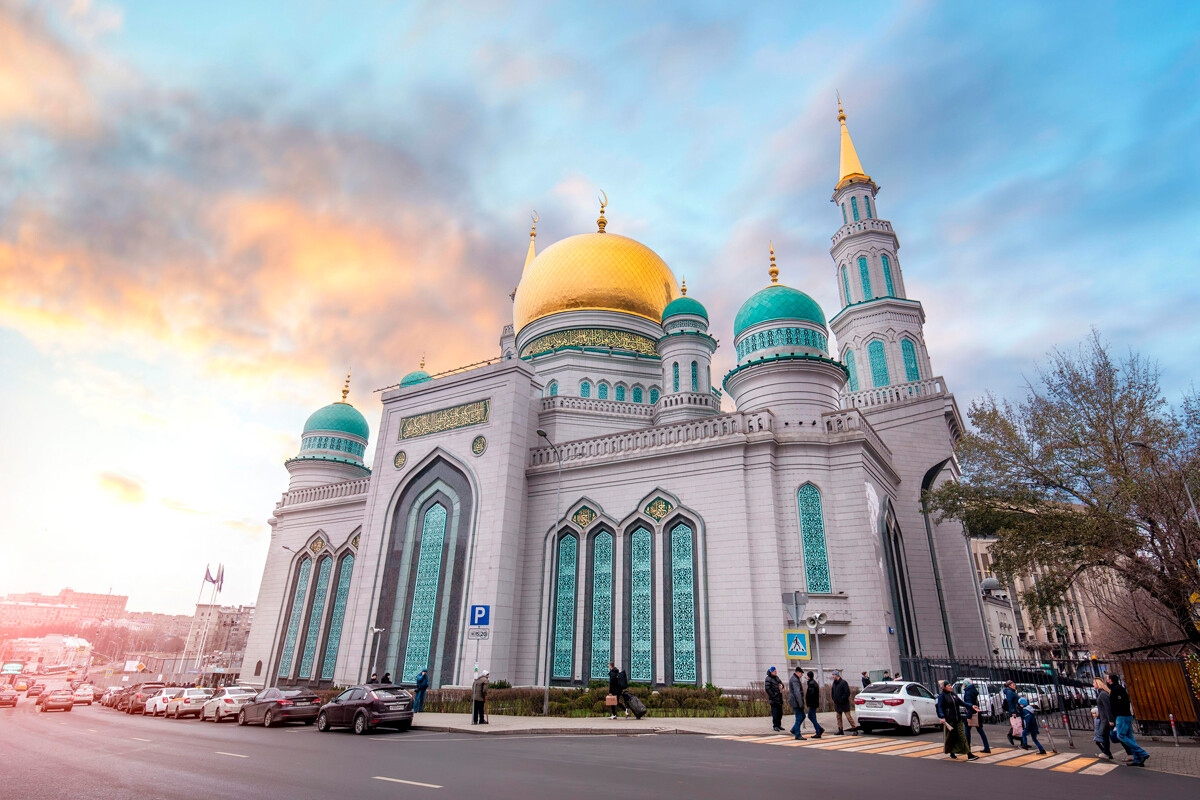 Places of worship were actively shuttered during Stalin and reformed into storage spaces or other secular, functional spaces - or simply demolished. But not the Cathedral Mosque. Financed in 1904 by textile trader Salih Erzin, the mosque never closed once in its entire history. The Soviet Union, which sought to forge ties with the Islamic world, would often invite Middle Eastern dignitaries to the mosque during official visits to Moscow. 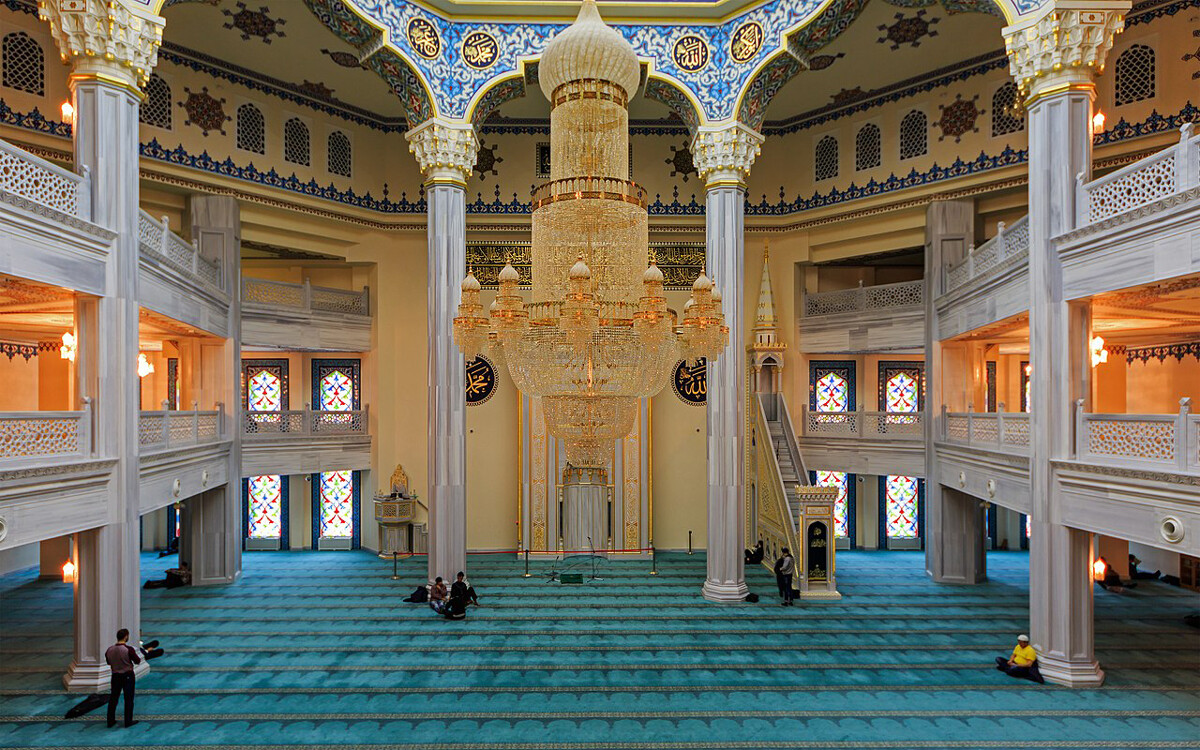 The mosque, as it is today, is not a reconstruction of the old one, but a newly constructed building in 2015. It is built on 131 stilts, owing to the fact that an underground river flows right beneath it - the ‘Naprudnaya’; plus there’s a metro line nearby. 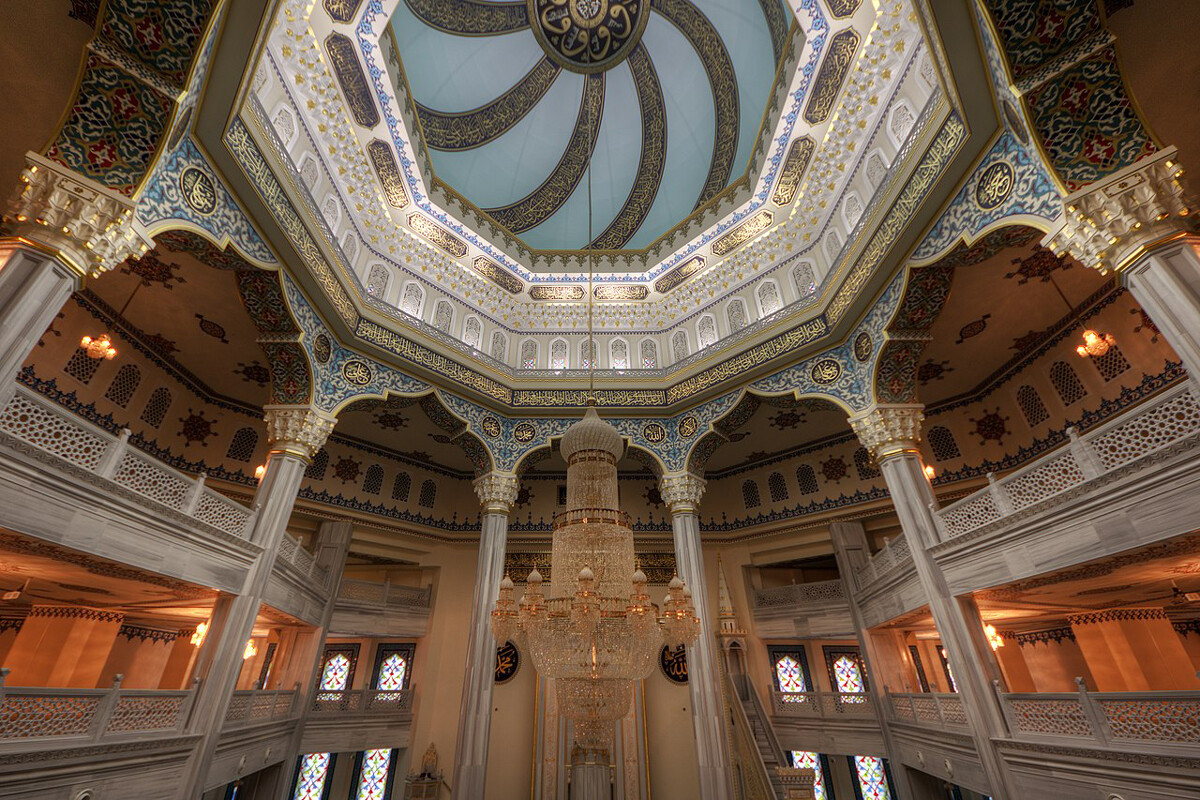 Three out of six floors are dedicated to prayer. There is a small and a big prayer hall in the building (the smaller one is actually a replica of the old Cathedral Mosque, which existed until 2011). 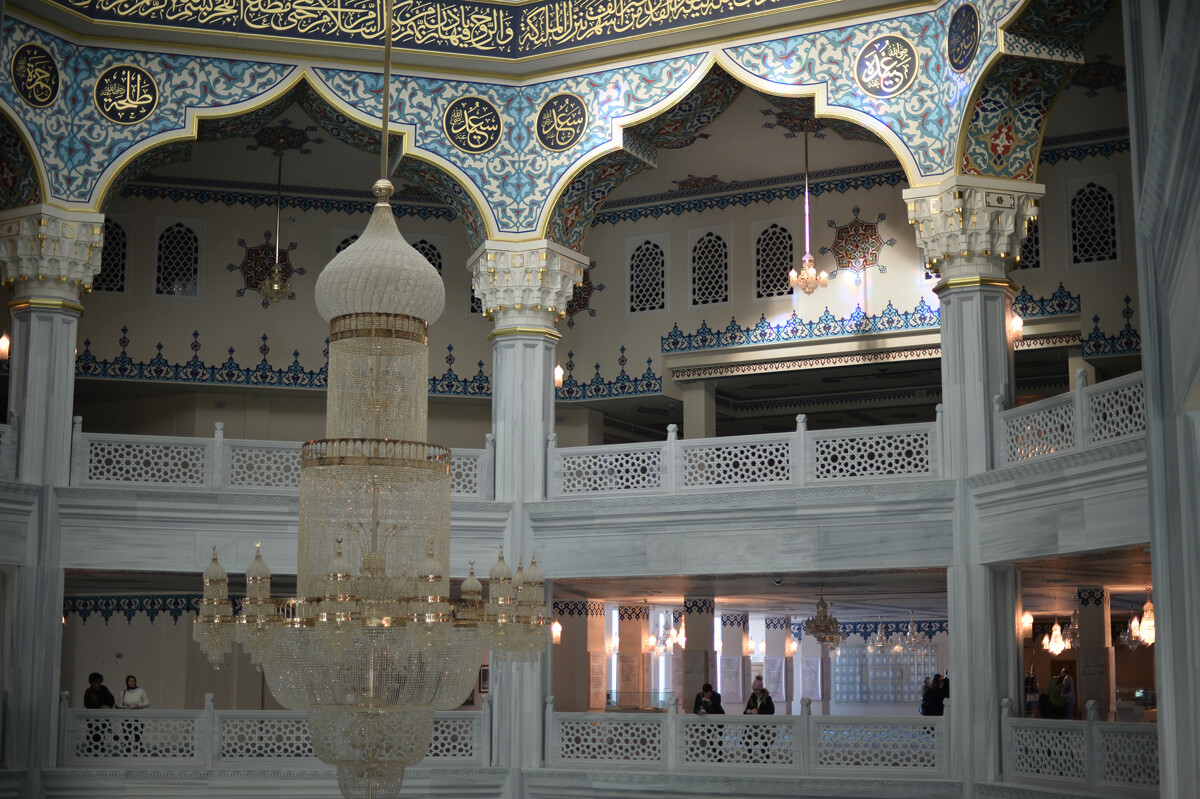 There are balconies located around the perimeter of the building. The mosque can accommodate up to 10,000 people. The marble was brought from Canada (that kind being more resistant to cold climates), while the main crystal chandelier, weighing 1,5 tons, as well as the carved front doors were a gift from the Turkish government. 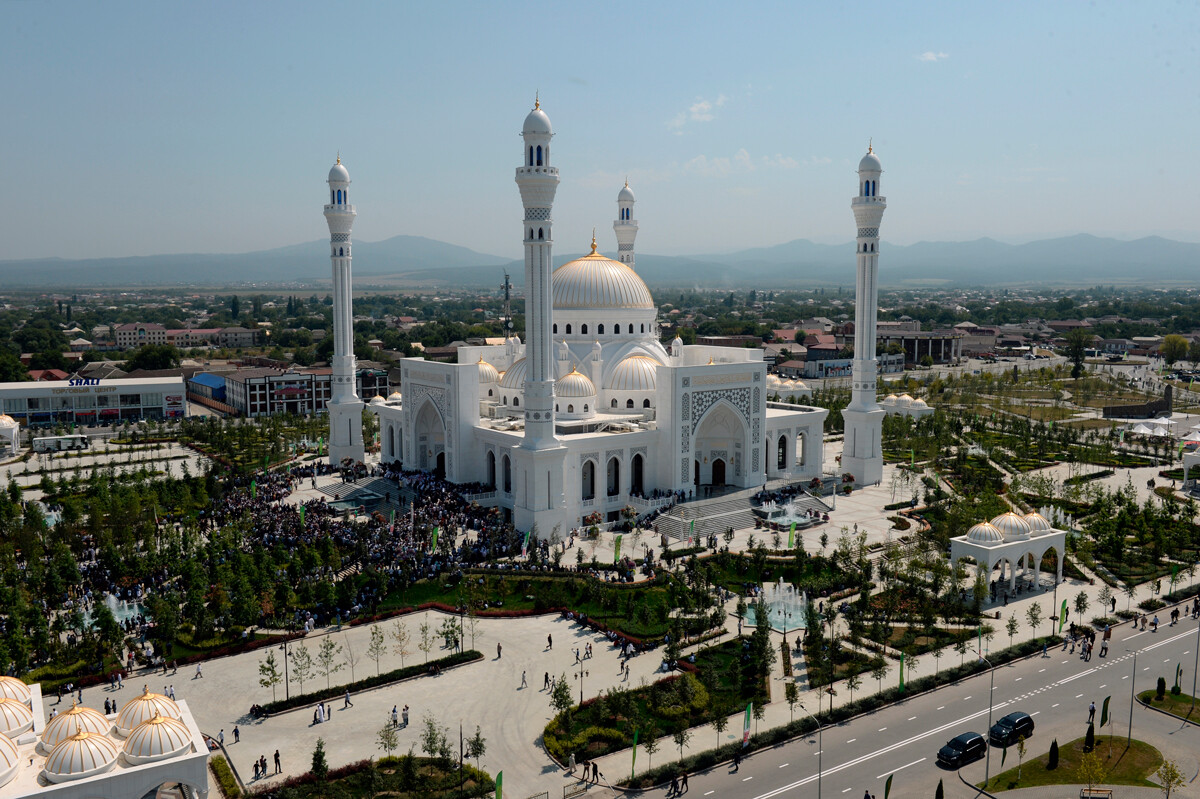 The name is really justified here: white marble, lots of gold and hand carvings make the ‘Pride of Muslims’ one of the most beautiful mosques in all of Russia. 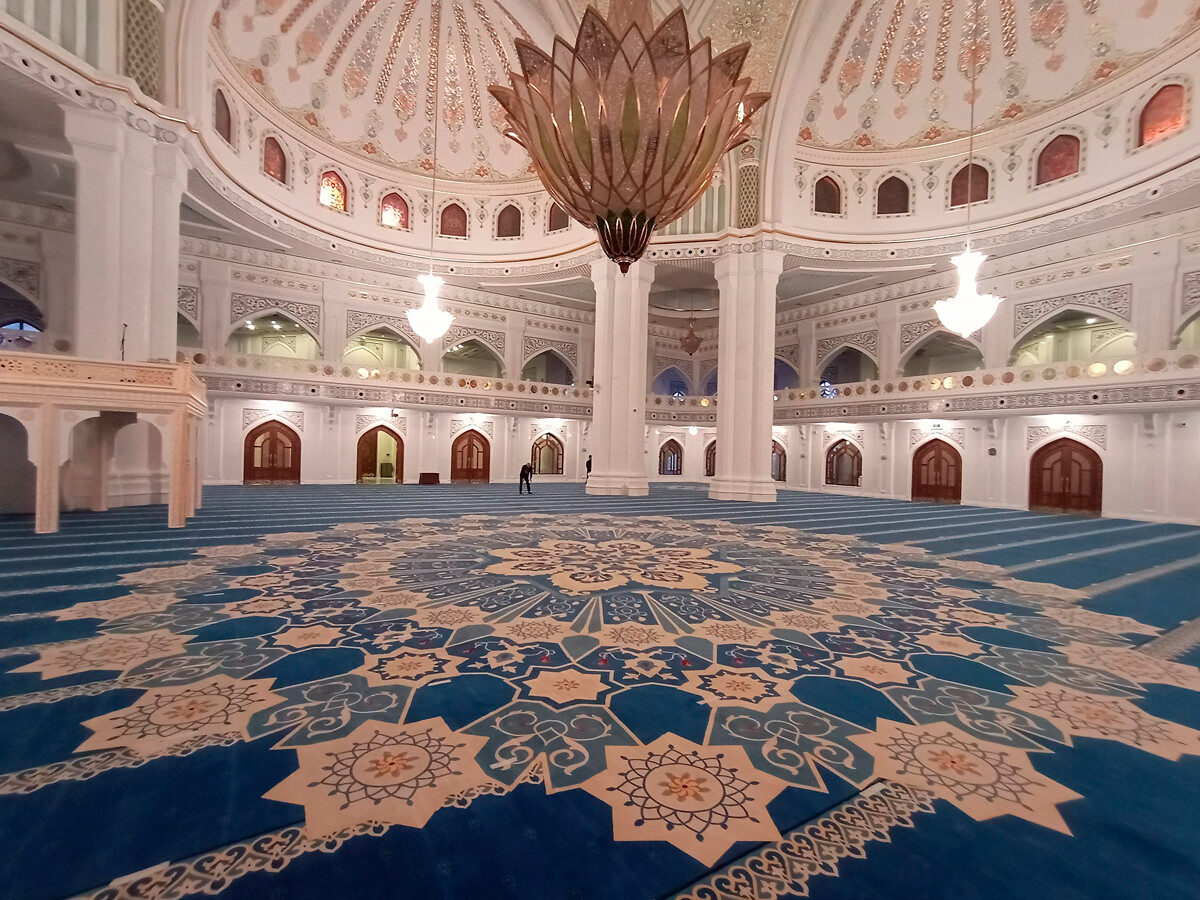 Built in 2019 in the city of Shali, about 30 kilometers from the Chechen capital Grozny, the mosque was named in honor of the Prophet Muhammad (the full name being ‘The Pride of Muslims Mosque Named After the Prophet Muhammad’). Today, it is the biggest mosque in all of Europe, able to accommodate over 30,000 people inside and another 70,000 on the surrounding territory. 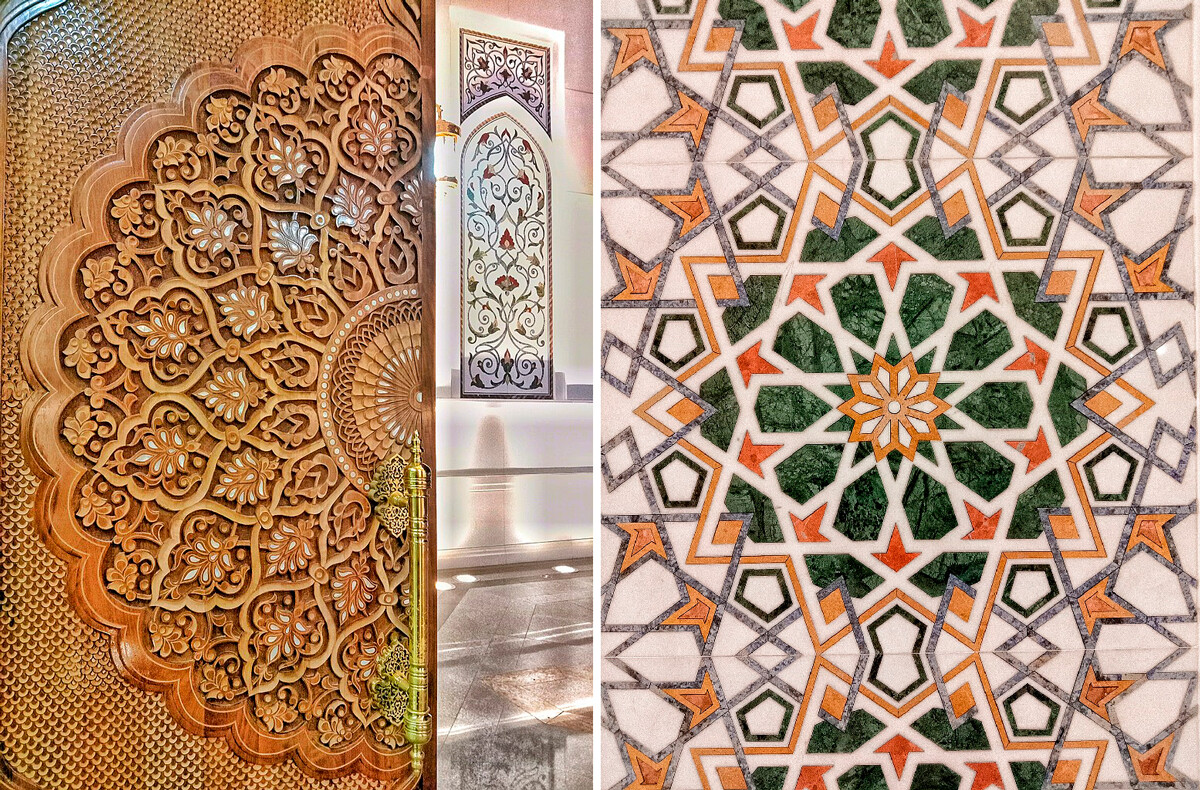 The architecture combines Persian, Central Asian and Byzantine styles. Outside, the mosque is covered in snow-white marble from the island of Thassos, known for its reflective and temperature-stabilizing qualities. The decor inside is almost all hand-carved, including the gold carvings underneath the dome and the color marble compositions. 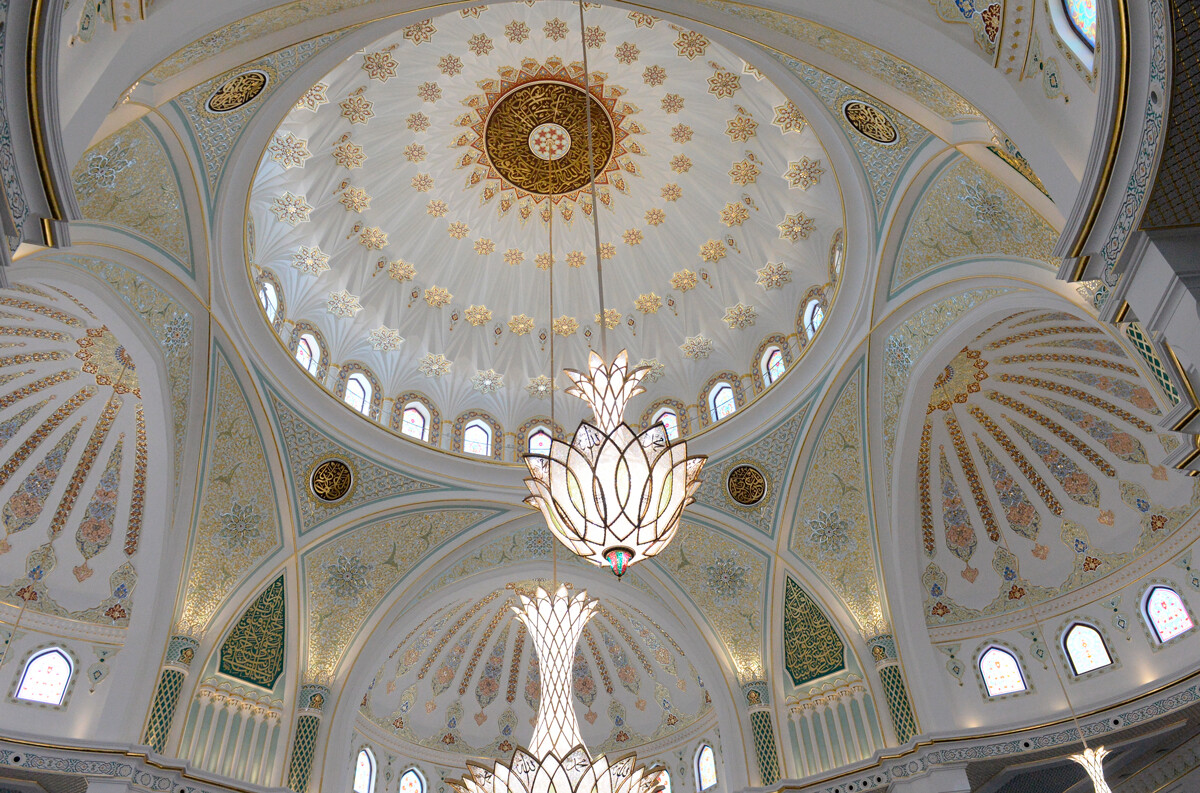 The main attraction is the chandelier, weighing almost three tons, made to order in Turkey, consisting of 395 lamps, adorned with gold and Swarovski crystals. 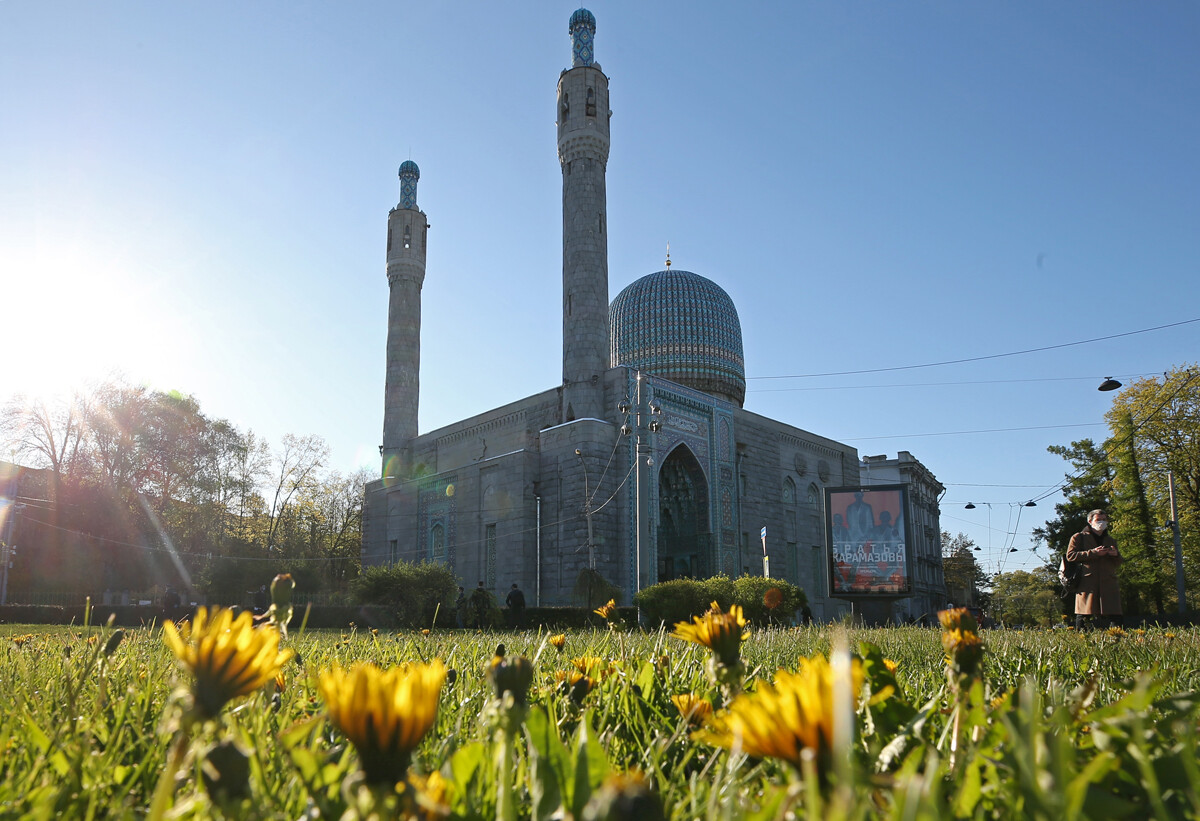 At one point, the Russian Empire’s main mosque, it also used to be the largest in Europe. The building is known, rather, as the only mosque on Vasilyevsky Island. It is also intimately tied with Tamerlan’s burial site in Samarkand, Uzbekistan. 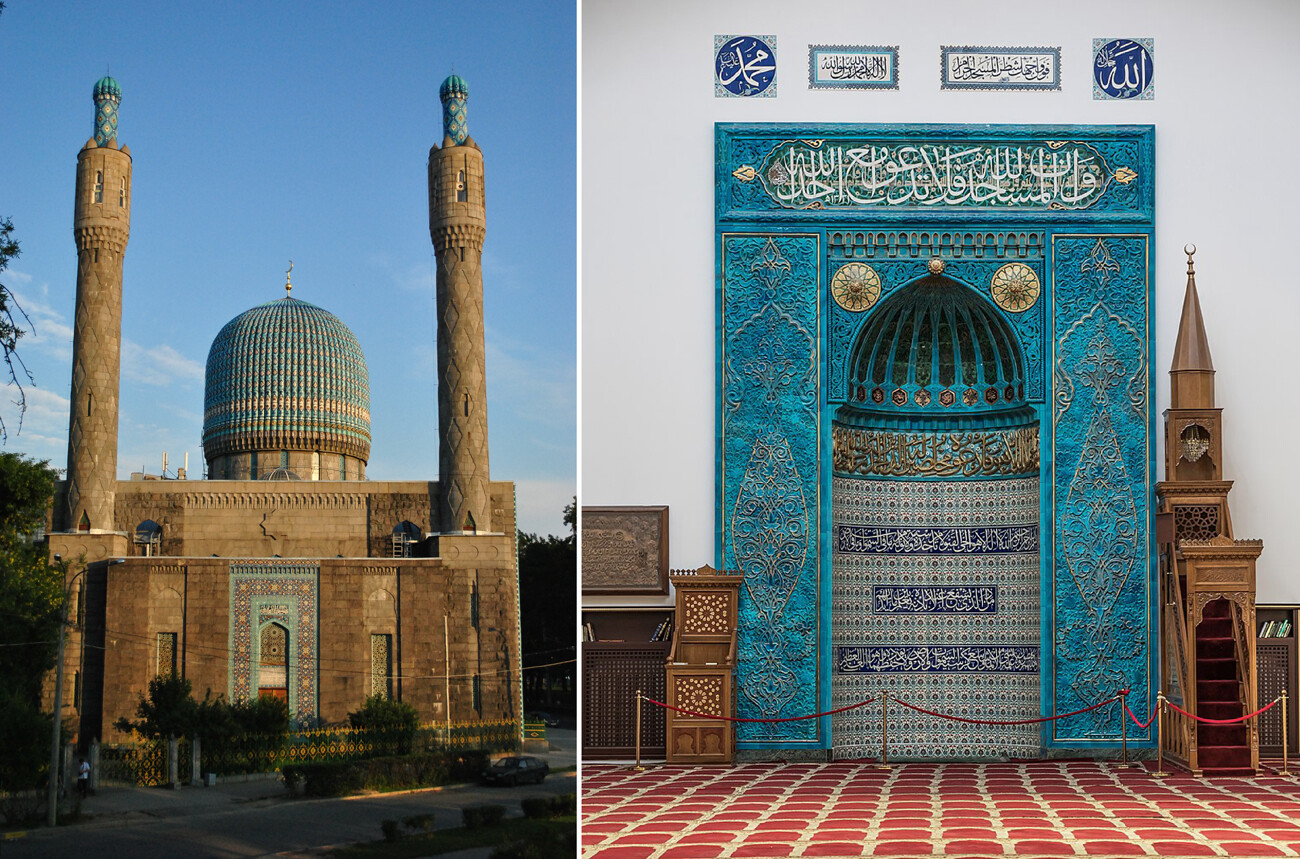 The dome almost exactly replicates the one in Samarkand. The carvings are also inspired by the burial site, done by artist L. Maksimov, who traveled to Samarkand to copy the ornament of the Shah-Zinde and Gur-Emir mosques. 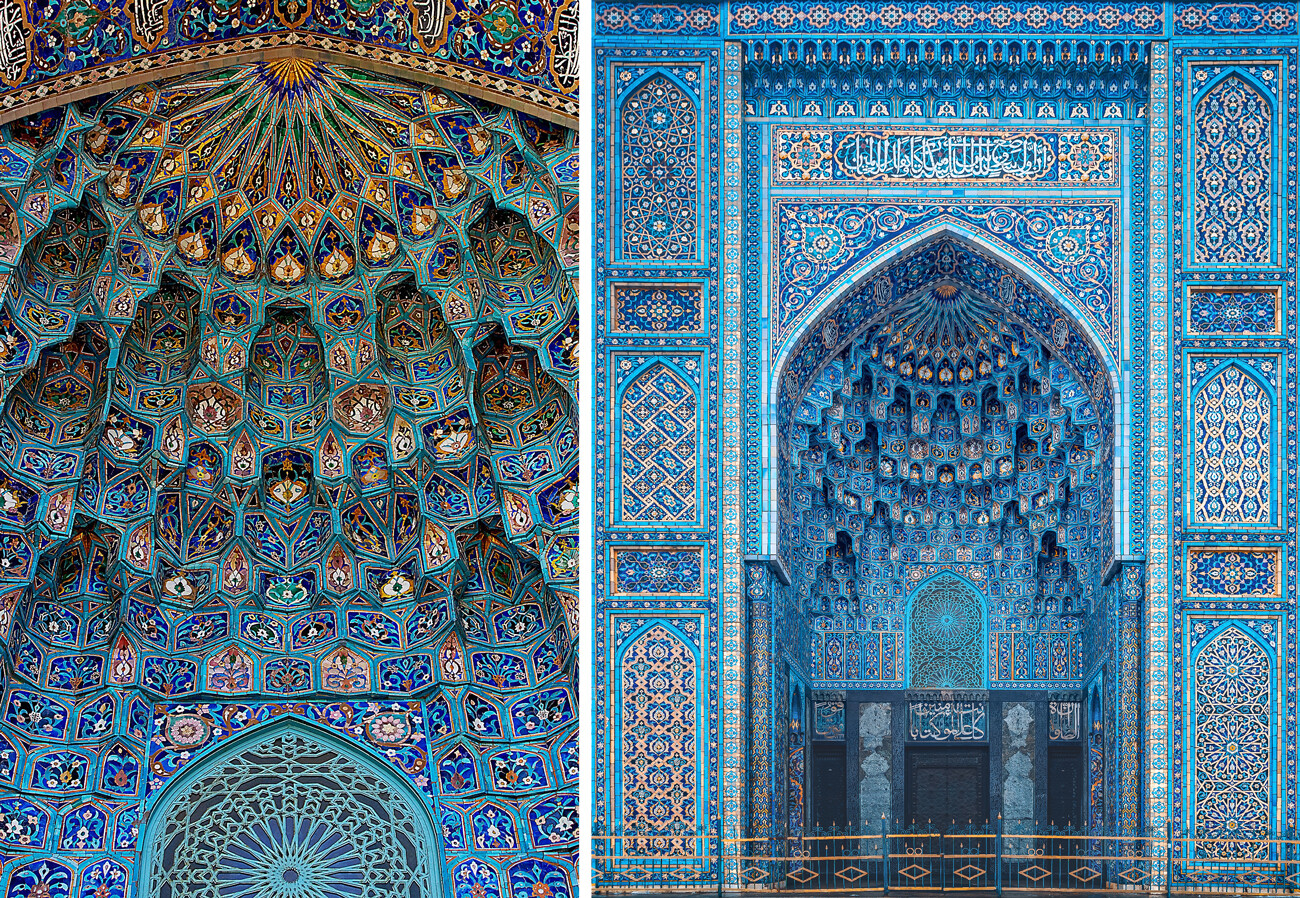 The mosque began construction in 1910. It is also referred to as the “blue mosque”: its portal, dome and minarets are covered in blue ceramics. 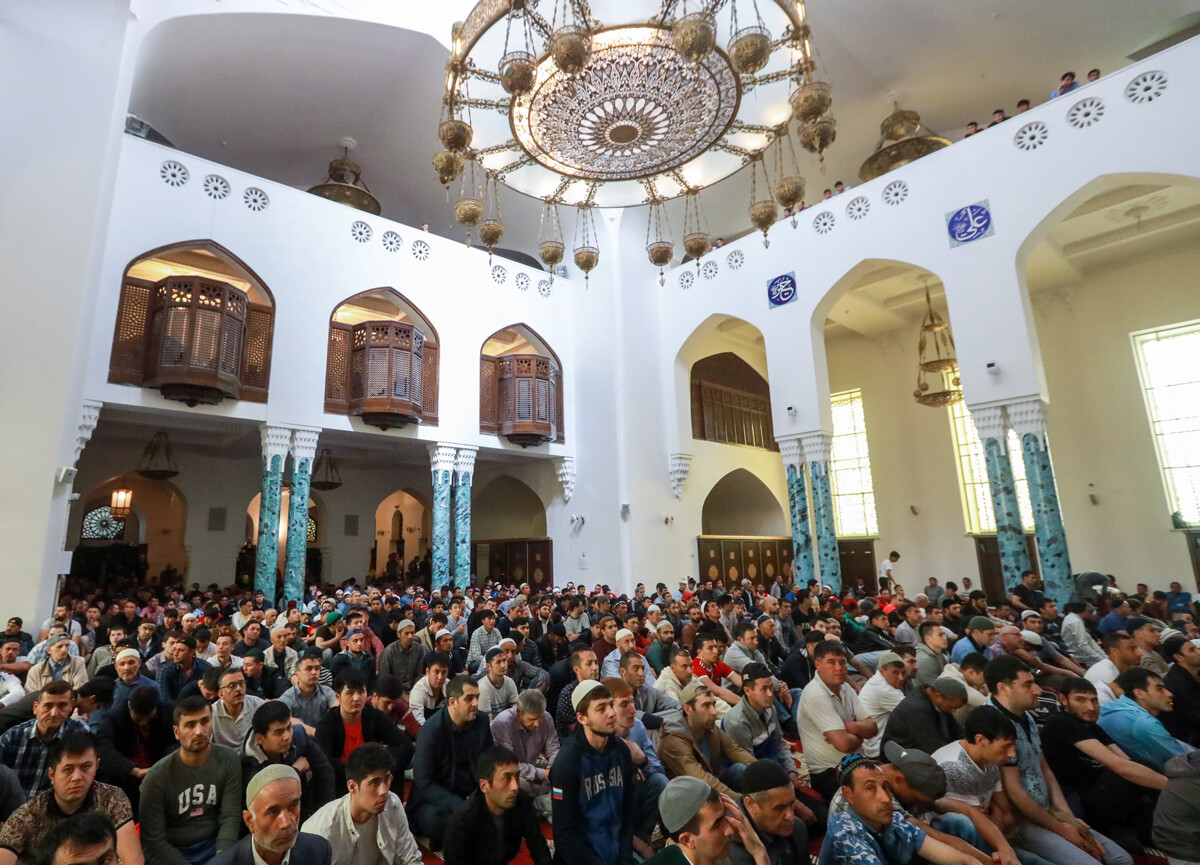 Its three floors can accommodate up to 5,000 people. The top floor has a wide marble staircase, leading up to the dome. On Fridays and during celebrations, it becomes another hall for men to pray in - aside from the first floor. 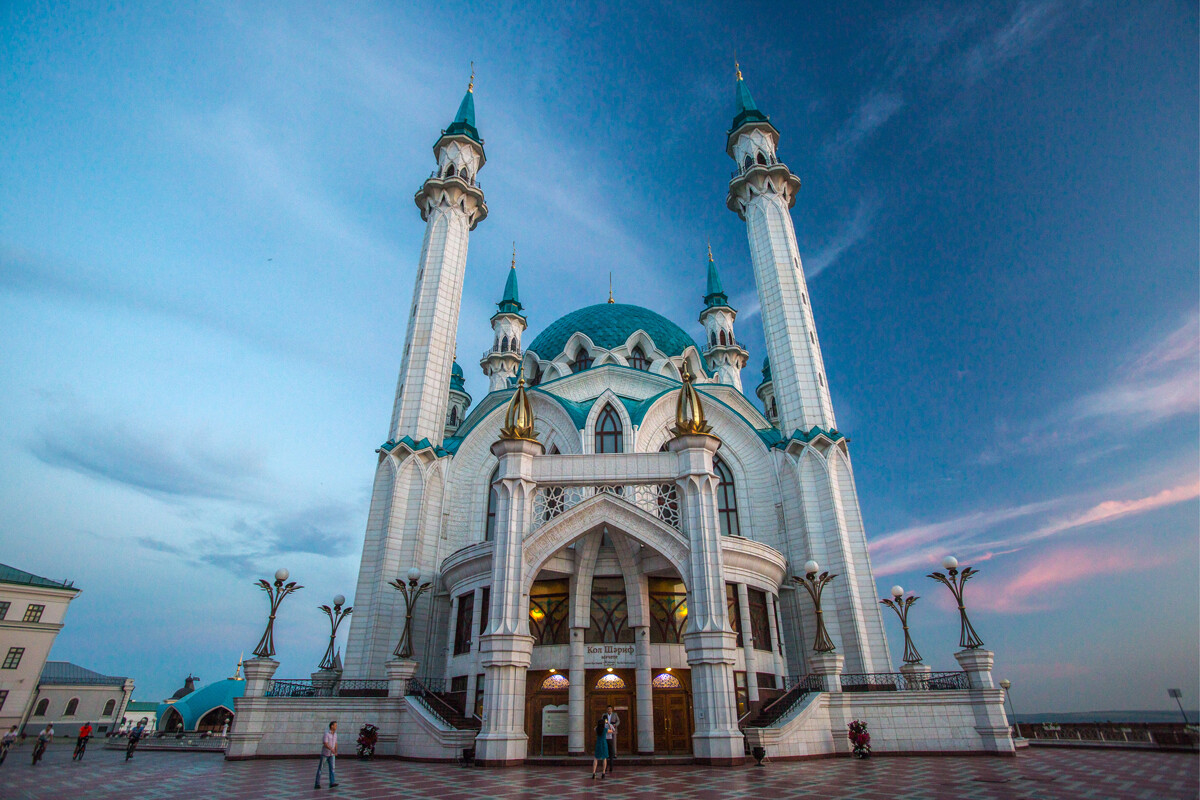 This mosque was constructed at the site of another mosque, destroyed in 1552 by Tsar Ivan the Terrible’s forces during the storm of Kazan, then the capital of the Kazan Khanate. The name hasn’t changed - it belongs to the last and most revered imams in Tatarstan (He was a Seid - an honorary title for those considered to be descendants of the Prophet Muhammad). When Ivan stormed the city, no one was left alive, including Kul Sharif. The city was then burned to the ground. 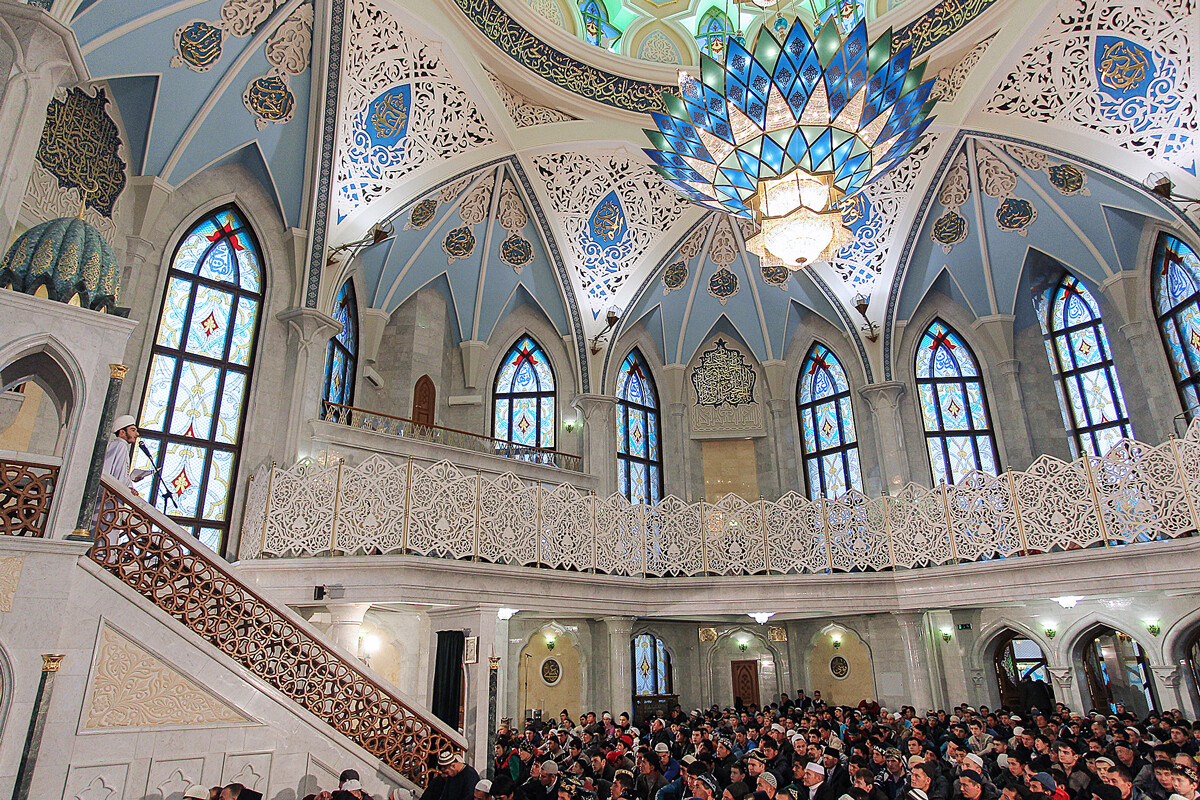 No one knows what the original version of Kul Sharif looked like. The modern building is an independent project, erected in 2005 to mark the 1,000-year anniversary of Kazan. Today, it’s Tatarstan’s main cathedral mosque. 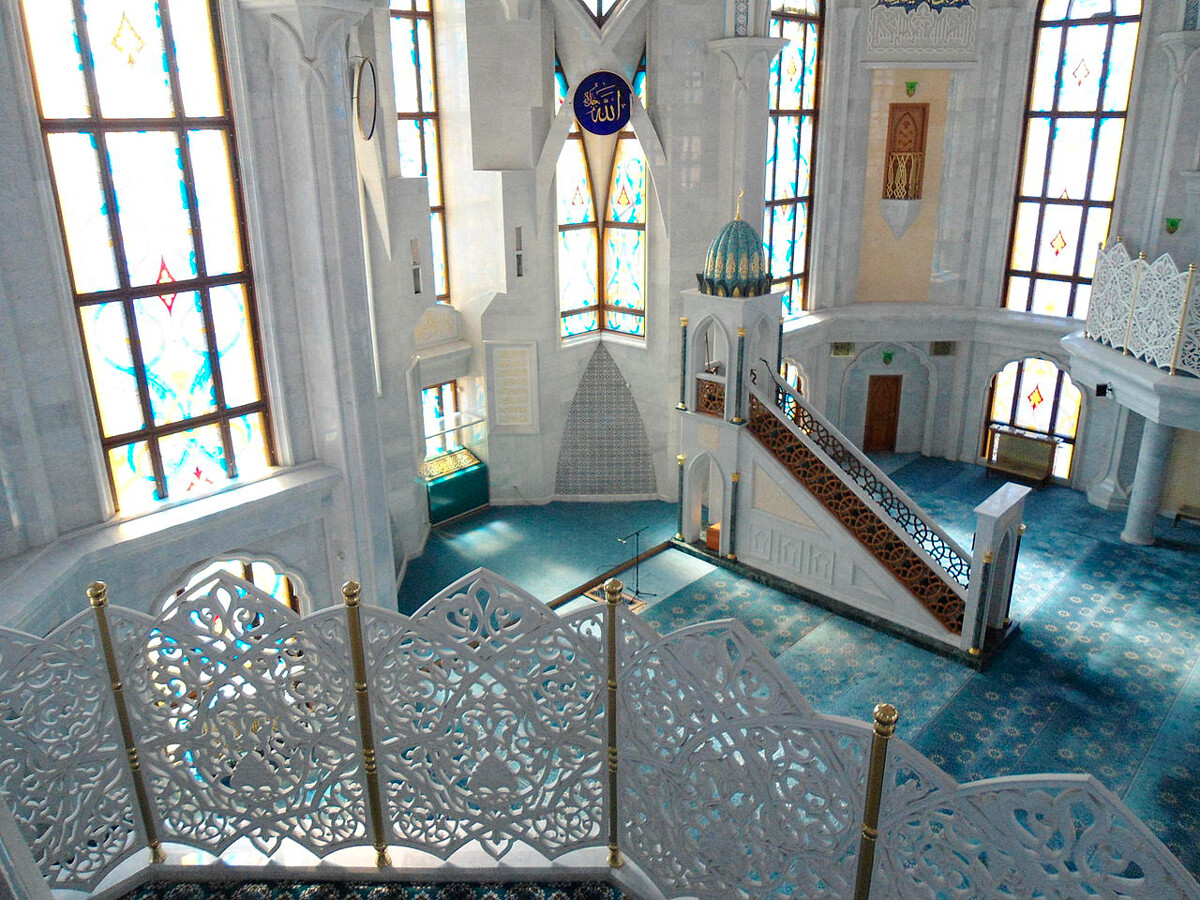 The building can accommodate up to 5,000 people. The main dome measures 17 meters in diameter and is decorated inside in the style of the famous Kazan hat - one of the Russian tsarist regalia. 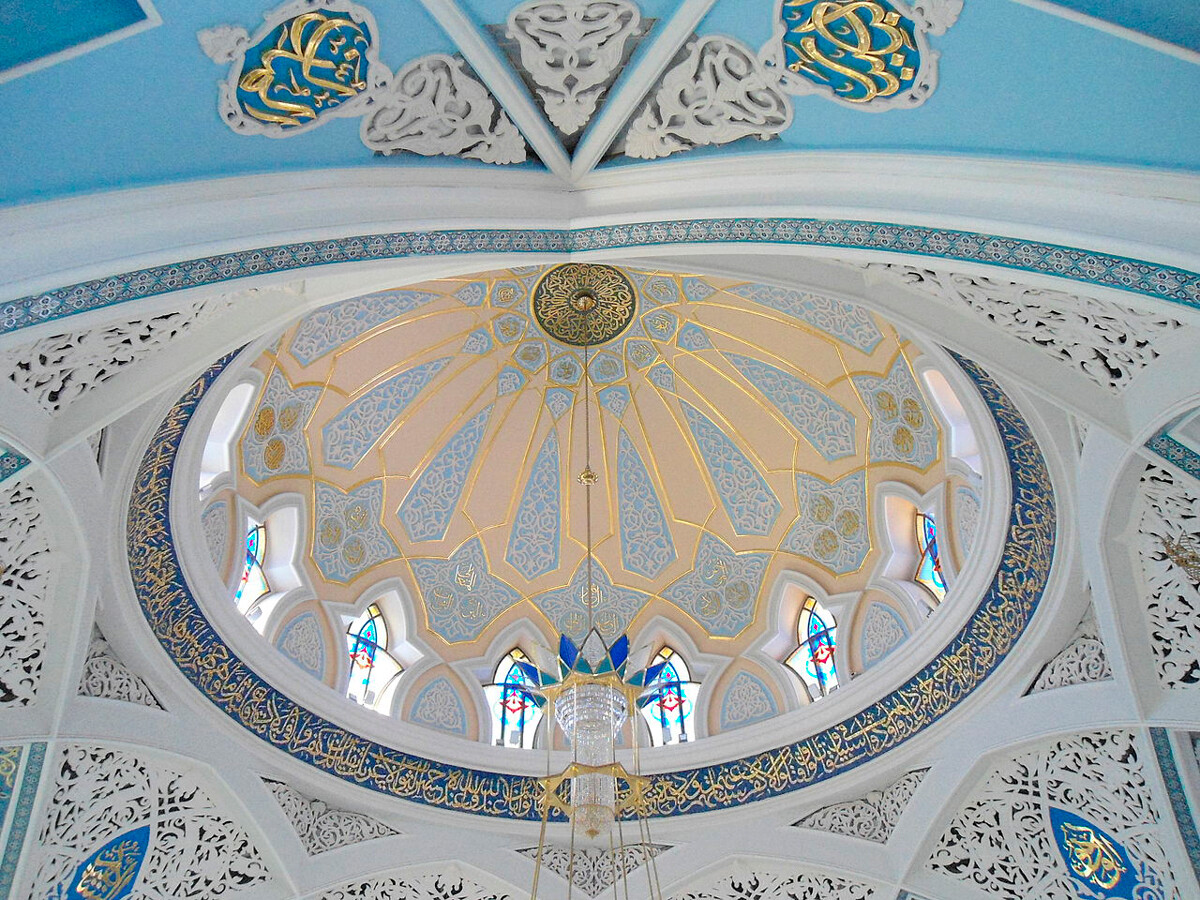 The mosque is lined with granite and Ural marble. There’s an almost two-ton chandelier, made in the Czech Republic, hanging above, and rugs, gifted by Iran.

There are also plenty of handmade elements there, such as the mosaic, which has been done using 16th-century methods.

This mosque in downtown Grozny was made in the style of the Blue Mosque in Istanbul. It opened in 2008. It’s also referred to as the Akhmad Kadyrov Mosque - in honor of Chechnya’s first president. 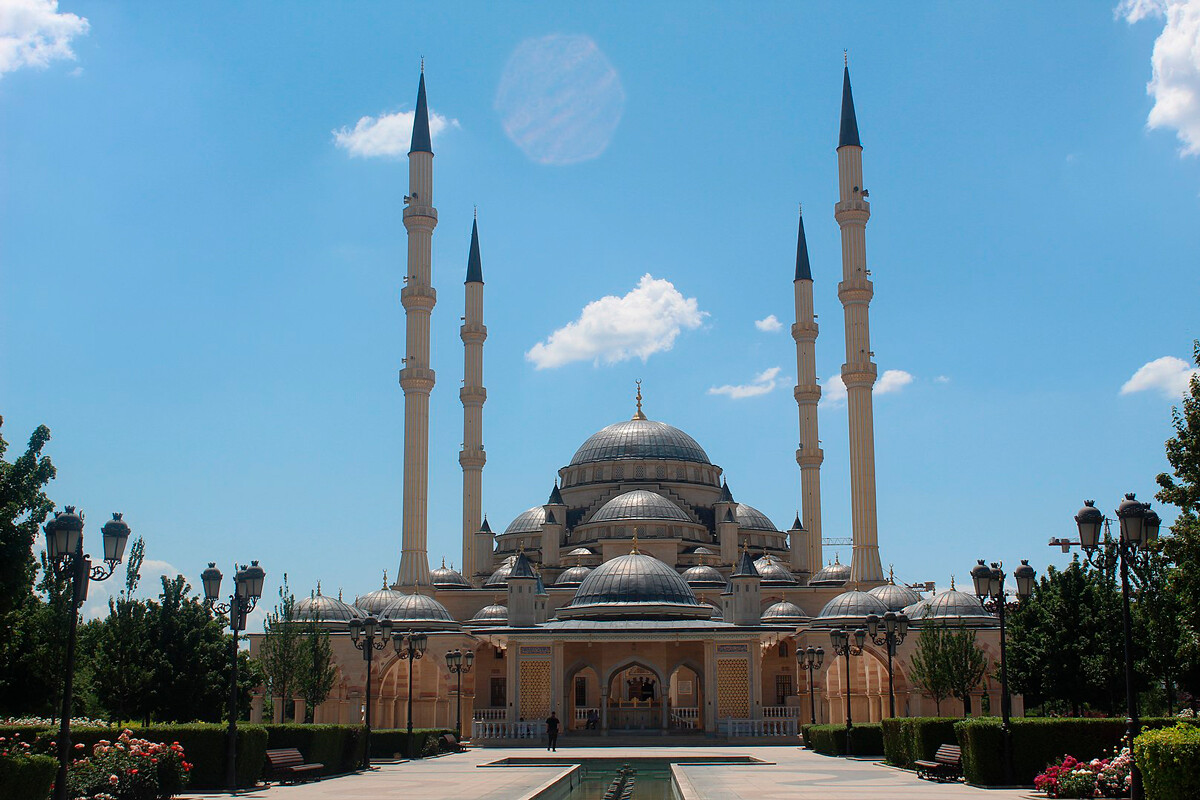 Inside, you’ll find white marble from Marmara Island, in Turkey, with traditional Chechen patterns, done by Turkish masters, with passages from the Koran, made with the highest-grade gold. 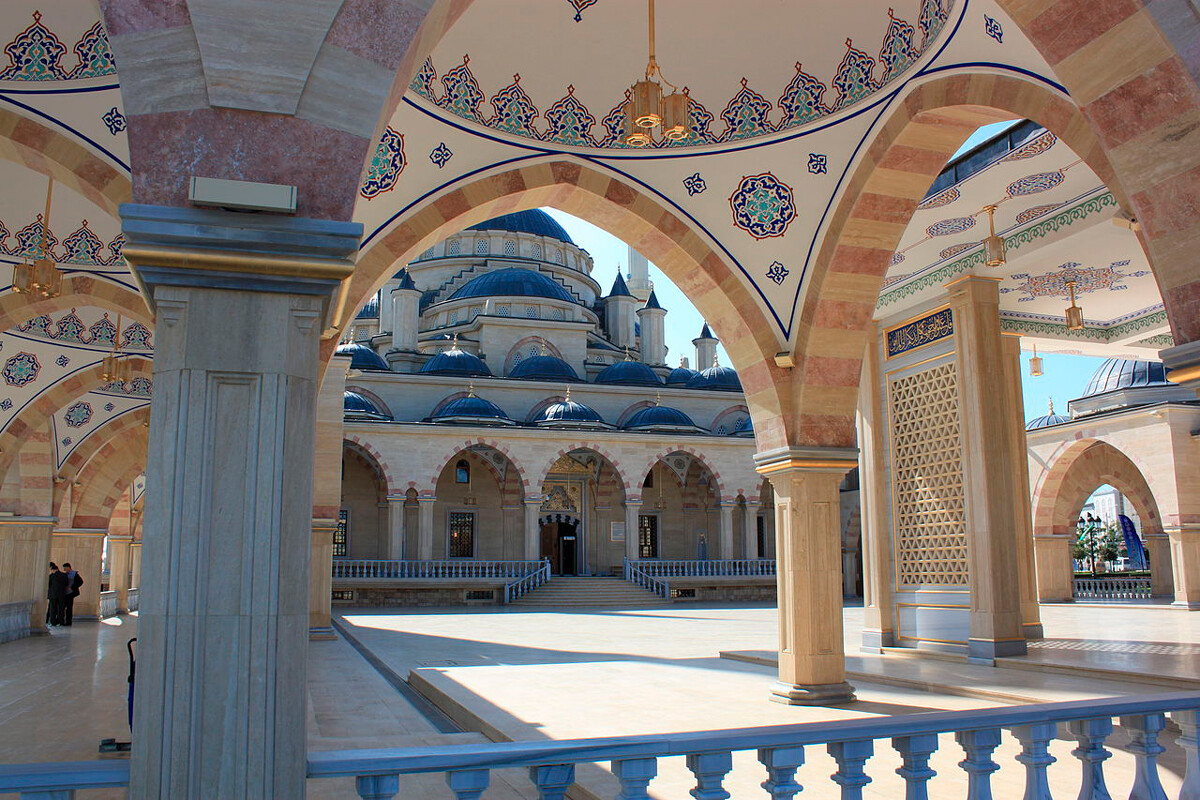 Thirty-six chandeliers with Swarovski crystals and Chechen ornaments replicate holy Islamic relics: 27 of them are in the shape of the Qubbat Al-Sakhra mosque in Jerusalem; another eight replicate the Al-Masjid an-Nabawi in Medina; and the largest one is in the shape of the holy Kaaba in the city of Mecca. 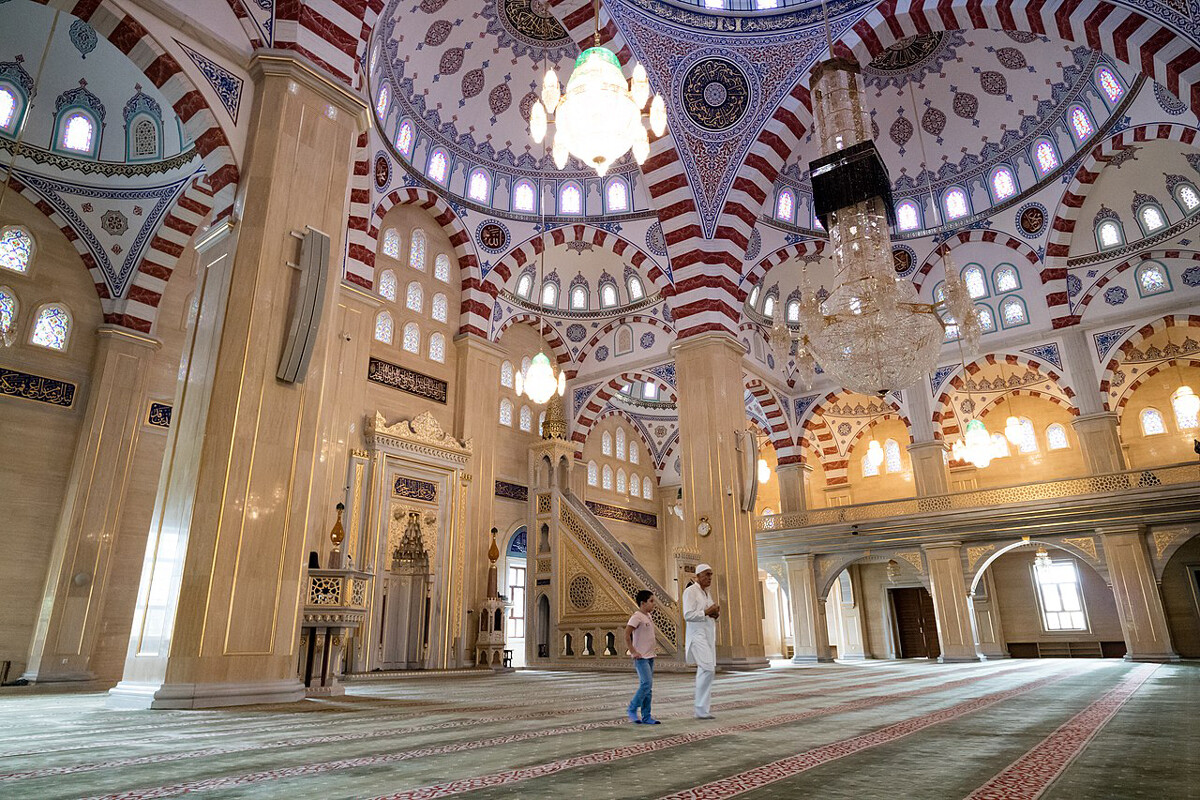 Several tons of bronze, 2.5 kilograms of gold and more than a million small parts were used to make the collection! 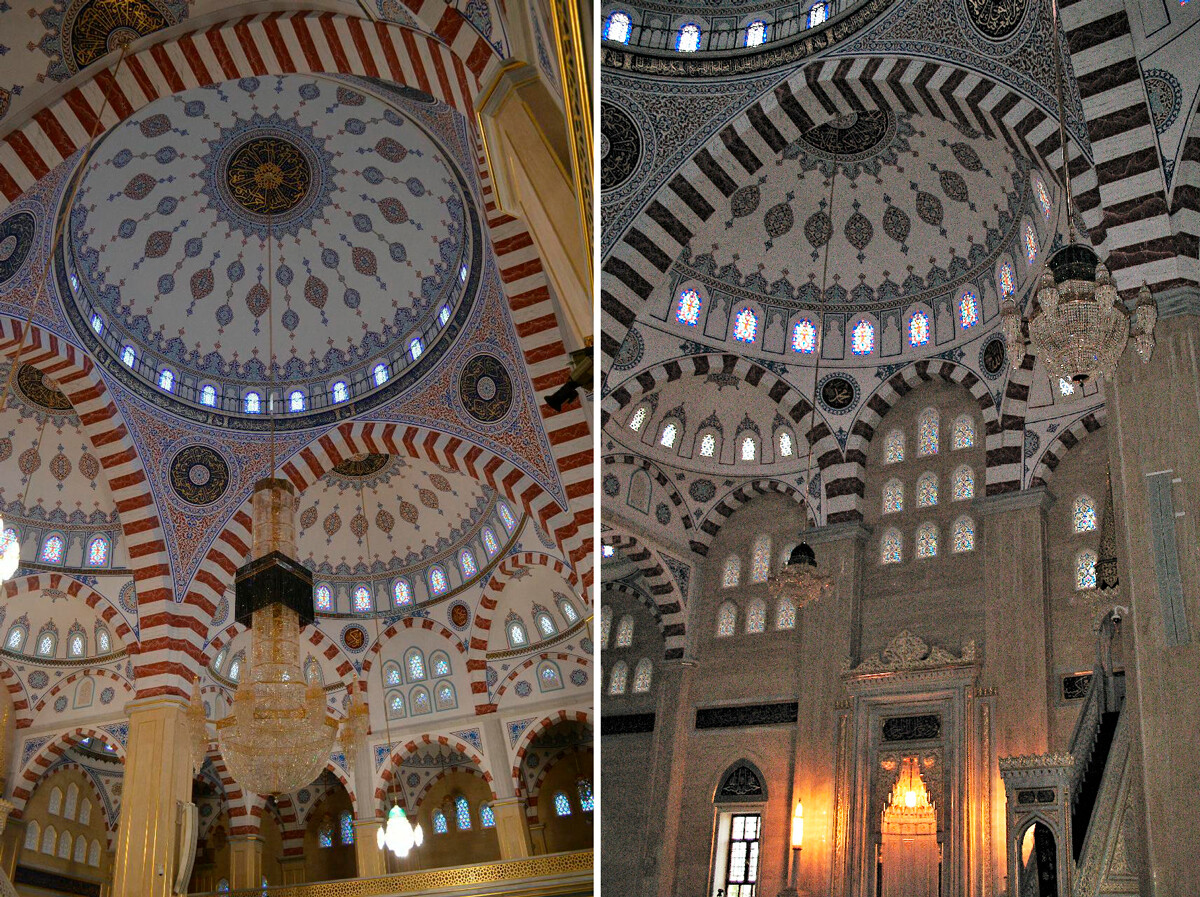