Russian roots in the 'House of the Dragon' 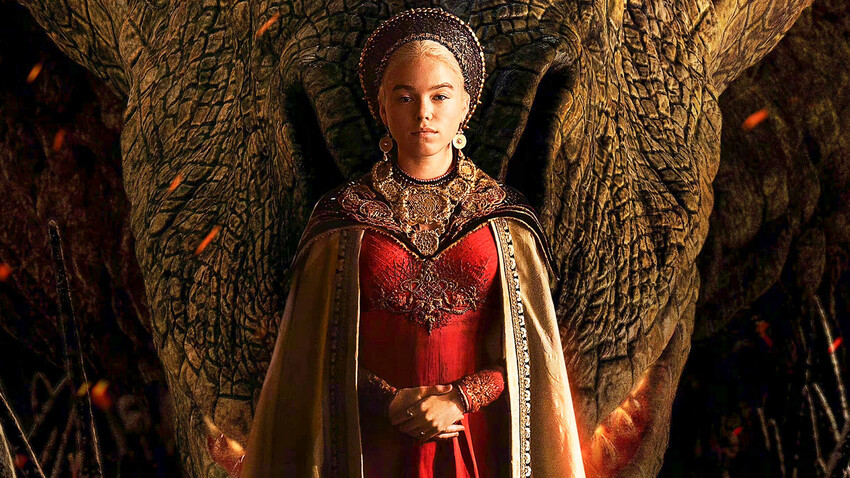 Legion Media
In the ‘House of the Dragon’ TV show, there are more parallels with Russian history than it seems at first glance. Even the dynastic conflict was partially “copied” from the real events of Russian history.

‘House of the Dragon’, a prequel to ‘Game of Thrones’ (2011-2019), one of the most successful fantasy TV shows of our time, brought viewers back to the familiar and beloved world of Westeros.

Fans of George Martin know that he based his books on a motley kaleidoscope of European medieval history, spicing it up with fantasy legends and, of course, dragons. Over the years, ‘Game of Thrones’ fans have found many interesting cultural references, including to Russian history and culture, in the plots and visual images of the series.

Why did the image of Rhaenyra Targaryen seem familiar to Russian viewers? 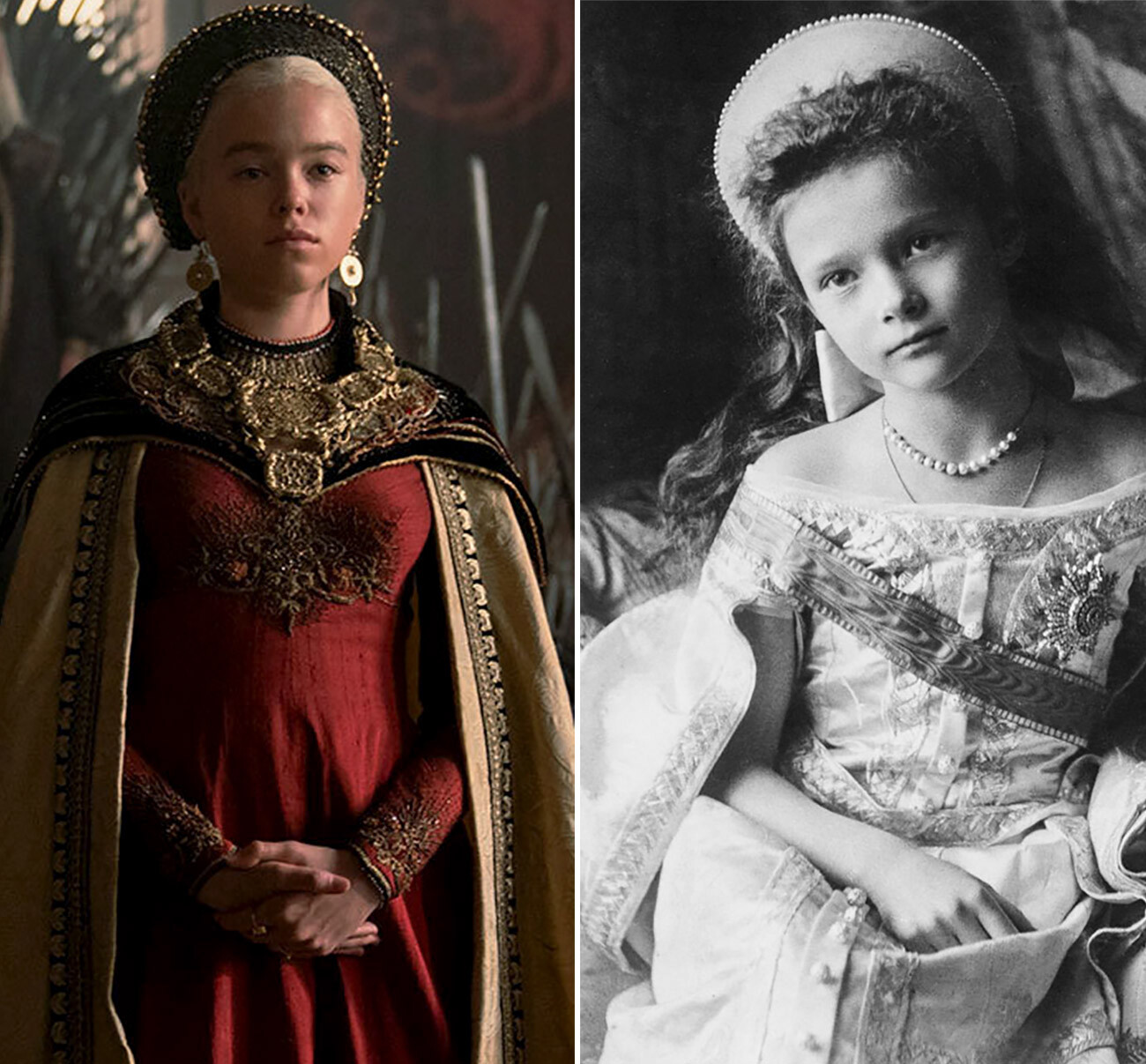 ‘House of the Dragon’ particularly pleased Russian fans of the world of Westeros. When HBO published the official poster of the main character of the series, viewers in Russia instantly drew a cultural parallel with the Russian folk costume, seeing in the girl’s attire a stylized kokoshnik and typical Russian costume wide round necklace, rounded earrings and loose dress silhouette. 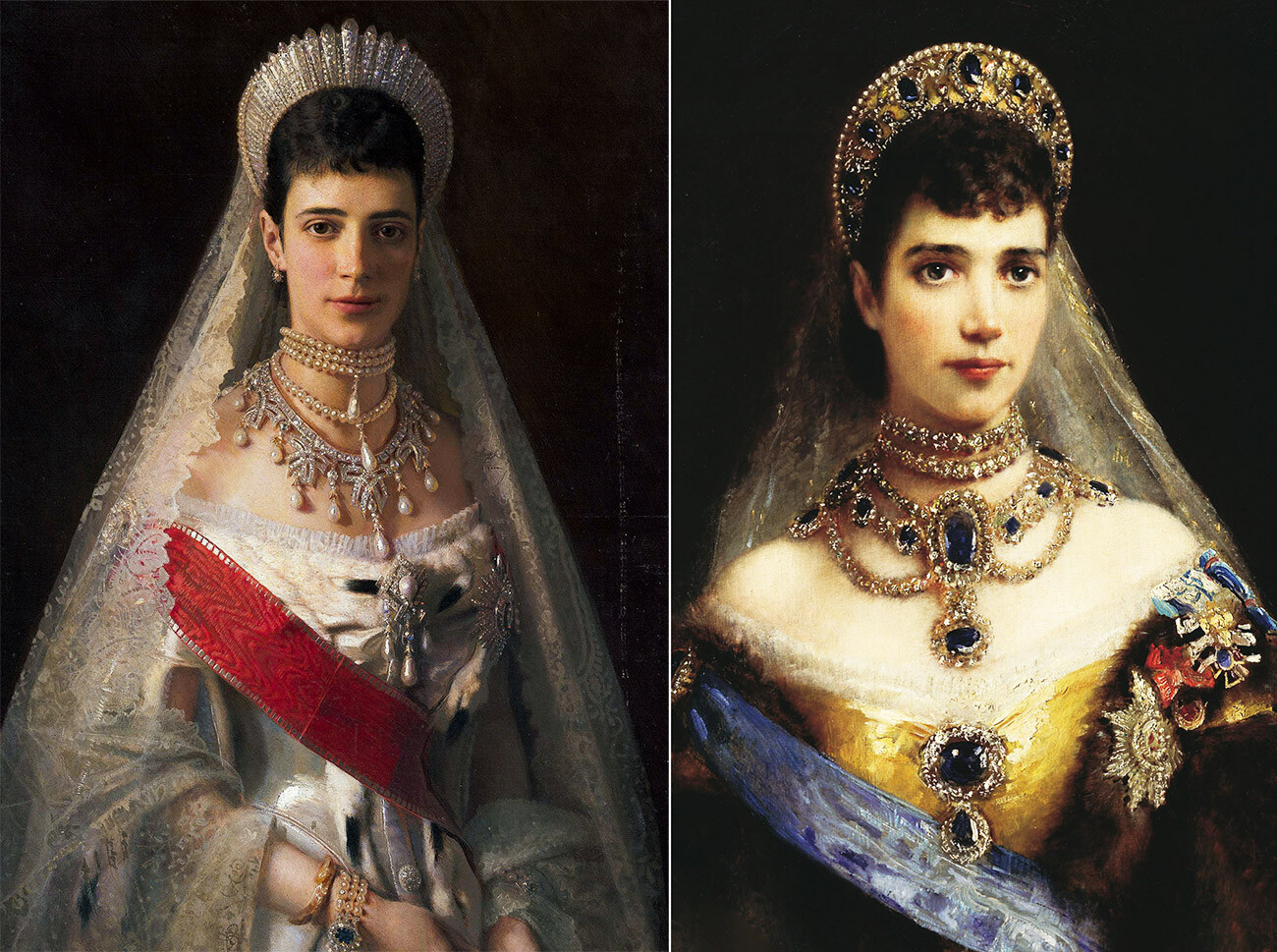 And we are not just talking about the kokoshnik as an element of simple folk dress, but about the ‘wreath’ kokoshnik or ‘tiara’ kokoshnik, which became popular in the Russian high society in the 19th century and existed until 1917. However, emigrants took this accessory with them to Europe, initiating an “a la Russe” fashion trend there in the early 20th century.

An even more striking example of a kokoshnik, now classic, with a comb and pendants on the temples can be seen in the series during Rhaenyra’s wedding ceremony. 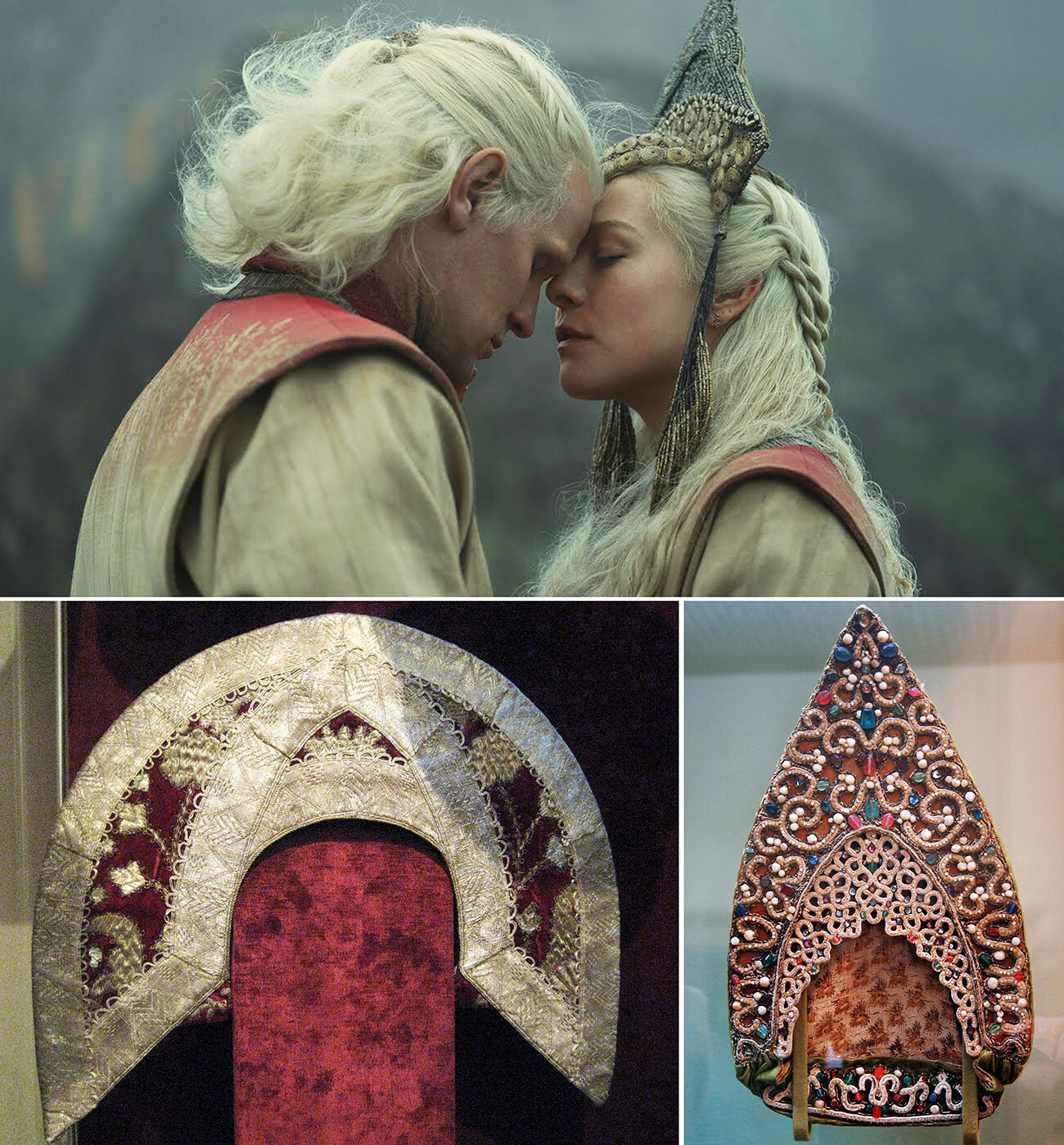 Although the shape of the headband varied from region to region in Russia, the base was usually made of cardboard, wrapped in cloth and decorated with different materials and ornaments, depending on the status and wealth of the owner: brocade, braid, beads, pearls, golden threads, foil, glass, precious stones, etc.

Most of all, Rhaenyra’s headdress resembles the traditional kokoshnik of the Kostroma Province, which is called ‘naklon’. The footage from the filming of the series shows that the kokoshnik is decorated with beads and “gold” elements, with the pendants also made of beads.

Why were the Russian-like elements in the Targaryen garb necessary?

It is important to remember that, according to George Martin, the Targaryens are not the original inhabitants of Westeros. Their ancestors came to the continent from the city-state of Valyria and brought their own customs and routines with them. Undoubtedly, one of the tasks of the series costume designer was to emphasize their uniqueness, to complement the exotic appearance of the characters and their language, which in the series is spoken only by members of the House and only on special occasions, with special ceremonial clothing. The task was brilliantly accomplished, but for inspiration we had to turn to more distant sources than the fashion of medieval Europe. 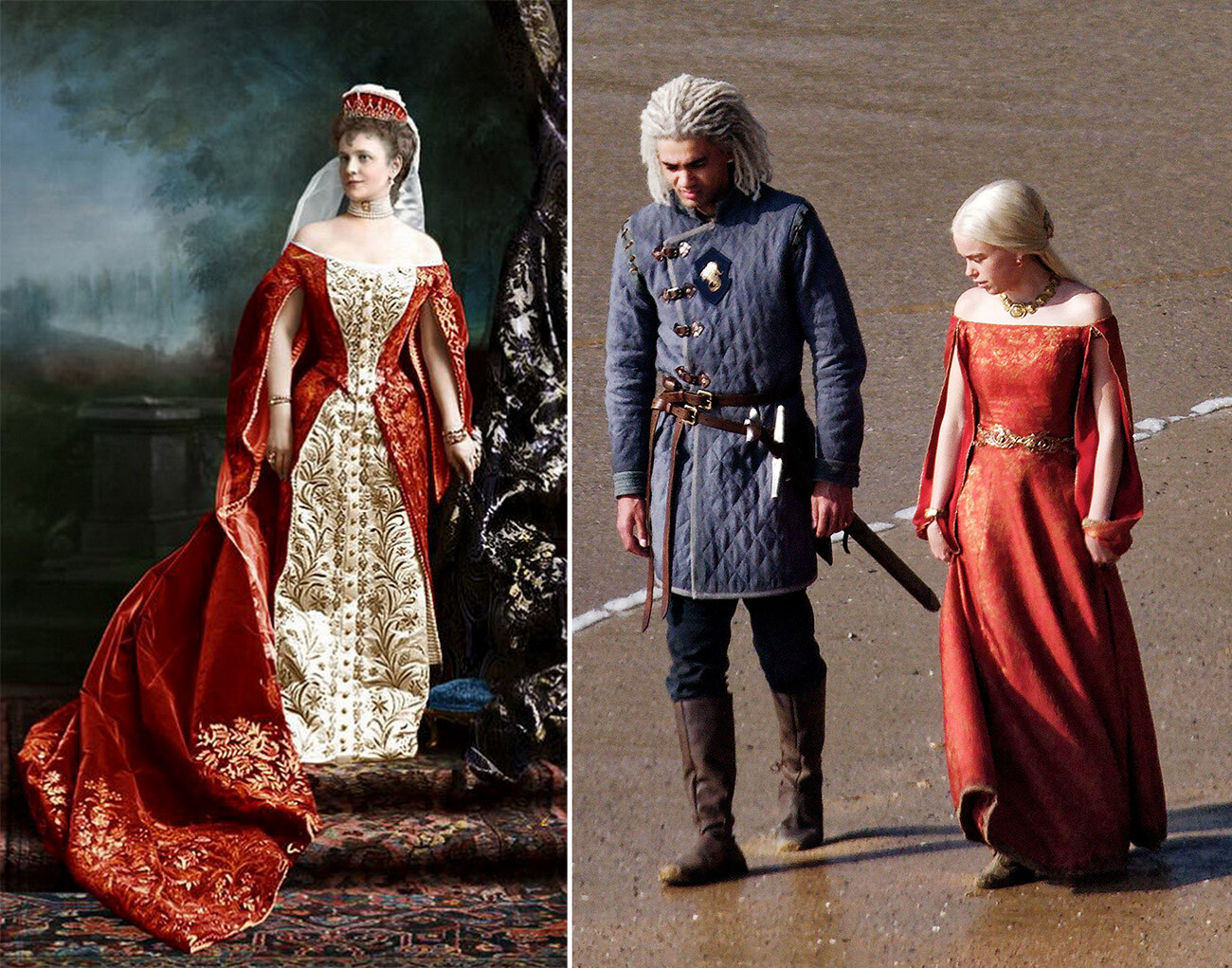 Russian fans of the series, inspired by the analogy, went even further, finding more controversial parallels between one of the main character’s dresses and the famous Russian court dress, which became mandatory for ladies of the Russian Imperial court from the middle of the 19th century.

And, of course, Russian viewers saw a strong association with Zmey Gorynych on the House Targaryen’s coat of arms, a lover of young maidens from folklore. However, in the interpretation of the House Targaryen’s sigil, two dragon heads belonged to women: the two sisters of the Conqueror, Rhaenys and Visenya.

Was there a situation in Russian history similar to the central conflict of the series? 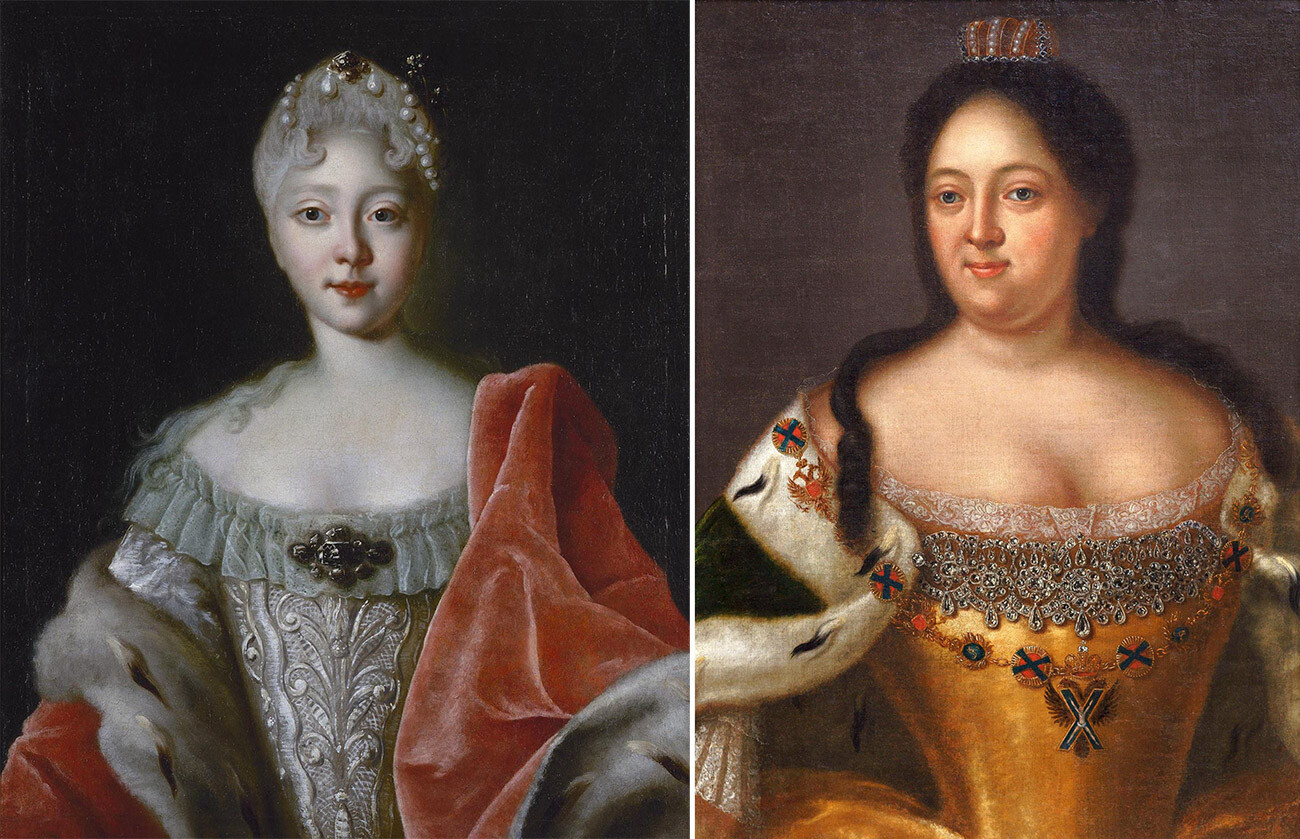 If we turn to the favorite game of viewers of the series and try to find a conflict similar to the central one in Russian history – between two influential women in the struggle for the throne, the story of the relationship of Elizabeth Petrovna and Anna Ioannovna certainly comes to mind.

Elizabeth Petrovna, the youngest daughter of Peter I and Catherine I, who, in her youth, amazed her contemporaries with her beauty, like Rhaenyra, and who was called “the delight of the kingdom”, had, according to the will of Catherine I, the right to the throne after Peter II (grandson of Peter I) and Anna Petrovna (daughter of Peter I). In the last year of Catherine I’s reign and early in Peter II’s reign, there were rumors at court about the possibility of a marriage between an aunt and nephew, who were friendly and spent a lot of time together, which refers us to the marriage between Rhaenyra and her uncle, which we saw in the first season of House of the Dragon.

After the death of Peter II in January 1730, Catherine’s will was rejected and the throne was offered to her cousin Anna Ioannovna. A similar decision was the basis of the conflict in the TV series – after the death of King Viserys, his desire to make Rhaenyra his successor was forgotten and the throne was entrusted to a candidate who was more convenient for the ruling elite.

The end of the plot of Russian history is known. After the death of Anna Ioannovna and a short period of regency of Anna Leopoldovna, on the night of November 25, 1741, Elizaveta Petrovna raised the grenadier company of the Preobrazhensky Regiment and, without meeting resistance in the Winter Palace, proclaimed herself the new Empress.

How the story of the confrontation between Rhaenyra and Alicenta in ‘The House of the Dragon’ will end, will be shown in the next seasons of the TV series, although those viewers who have read the book know that this confrontation will be much more tragic.