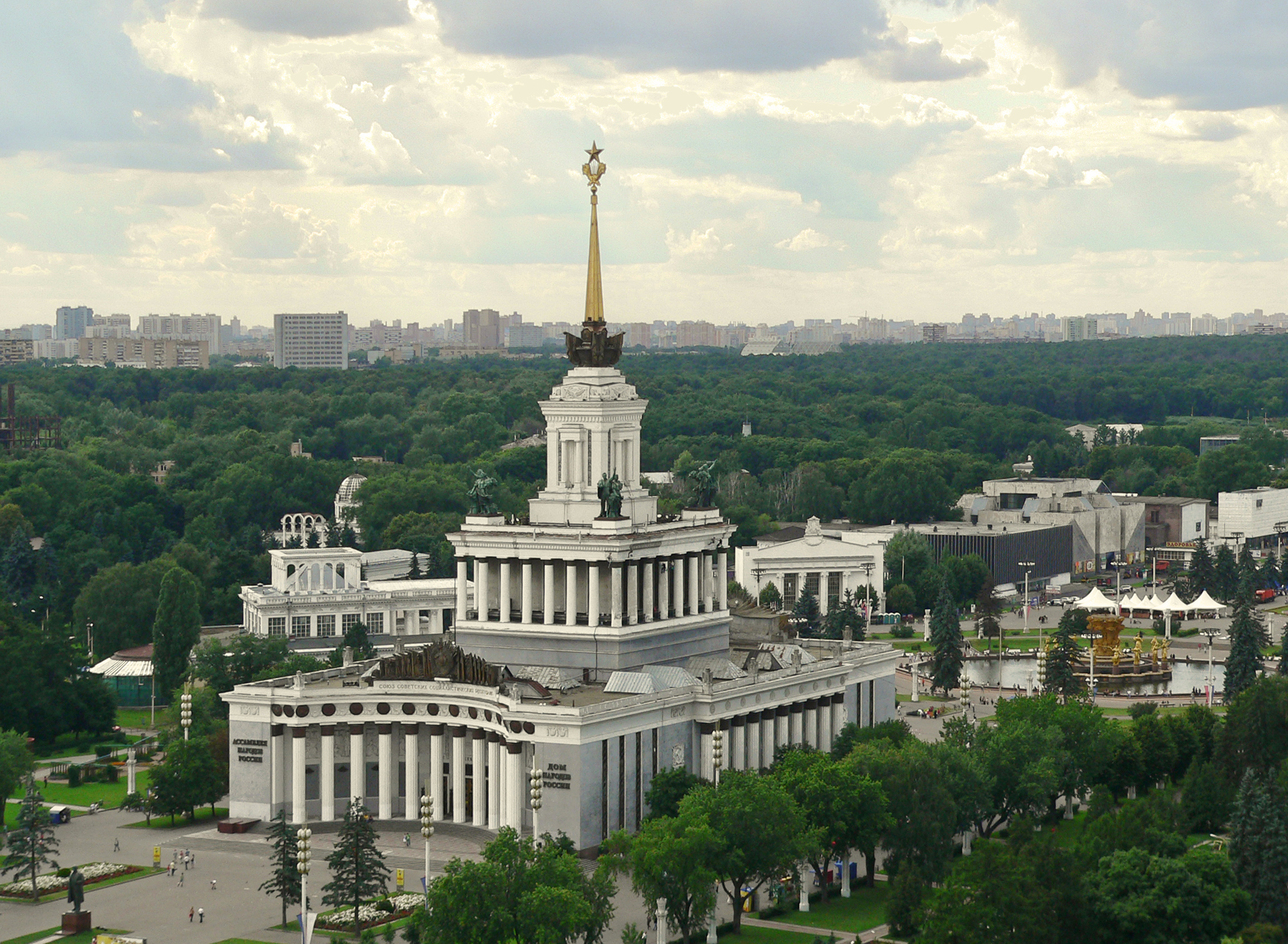 Pavilion No.1, VDNKh. Source: Courtesy of the Moscow Biennale of Contemporary Art

The Moscow Biennale of Contemporary Art this year is perhaps the most experimental ever, with no dearth of striking and unusual items on display. We outline five must-see exhibits at this year’s event.

Every artwork at this year’s Biennale will be created onsite, within 10 days. Unlike the past, the main exhibits are not sculptures or paintings, but discussions and performances united by the theme of relations between the peoples of Eurasia.

The exhibition is being curated by Bart De Baere, director of Antwerp’s MUHKA, Nicolaus Schafhausen, director of Kunsthalle Wien, and Defne Ayas, director of the Witte de With Centre for Contemporary Art in Rotterdam.

After the 10-day acts of creation, art objects and videos of the performances will be on show at the Biennale. Performers include artists like Saâdane Afif, Andrei Kuzkin, Taus Makhacheva and even the founder of the portal e-flux, Anton Vidokle. 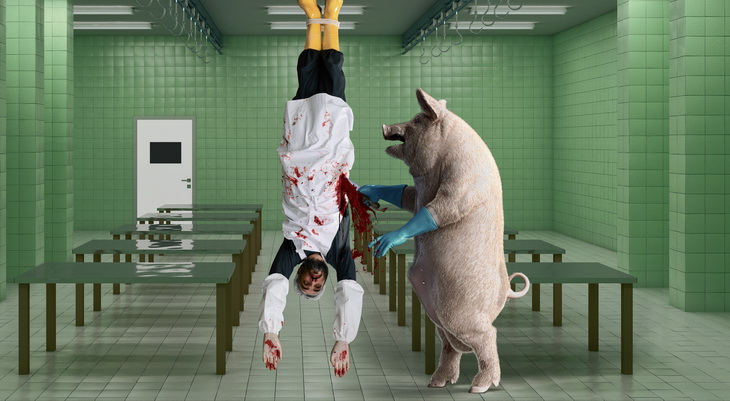 Displays by the four-member group AES + F (Tatiana Arzamasova, Lev Yevzovich, Yevgeny Svyatsky and Vladimir Fridkes), much like the premiere of a Hollywood blockbuster, are astonishing in their scale and scope.

A dynamic plot, dripping with special effects, and huge crowds; all these have long distinguished the films of AES+F, who work at the intersection of video, film and photography.

At the 2015 Biennale, they have filmed scenes from medieval engravings in the genre ‘Inverso Mundus’ ("World Upside Down"), depicting surreal scenes like the pig killing the butcher, the child punishing the teacher, and the beggar giving money to the rich. In their interpretation, the apocalypse looks glamorous and attractive, while the display retains the critical pathos of a "world upside down." 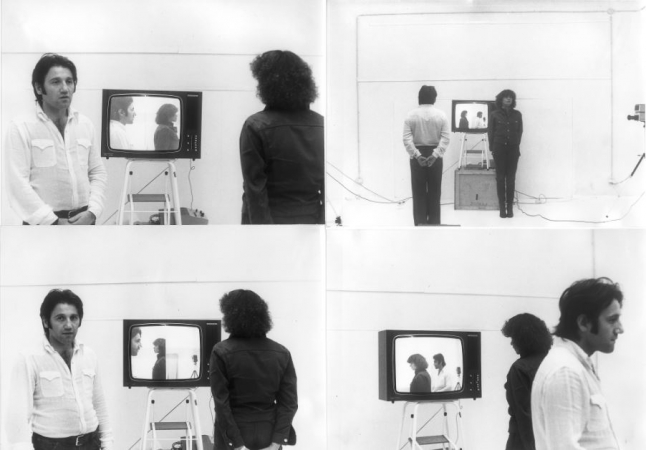 Curator and art theorist Professor Weibel will appear in Moscow as a pioneer of media art.

Weibel’s art has never been a purely technological experiment. Both in the 1970s, with enthusiasm for video, and in the 1990s, which opened up digital technology, he has always remained a critic of society, earning the honorary title of media rebel.

In addition to videos and video installations, the exhibition will showcase a documentation of his actions. The best-known was made during the height of Viennese ‘Actionism,’ when Weibel was walked on a leash through the streets of Vienna by beauty Valie Export, now an icon of feminist art. 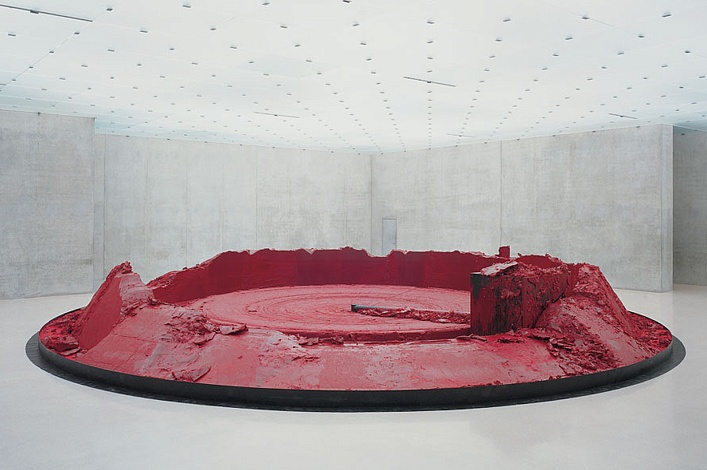 Anish Kapoor, a British sculptor of Indian origin, is quite an international superstar of contemporary art. He has won numerous honours, accolades and awards, including Britain’s prestigious Turner Prize, and was a participant at the Venice Biennale. The renowned sculptor with a penchant for huge forms, has been at the centre of a recent controversy over one of his sculptures, ‘The Dirty Corner,’ at the Versailles palace outside Paris.

His exhibit at the Biennale, My Red Homeland, is a huge 12-meter circle of wax on which a steel arm moves, removing the layers of wax so that the viewer can physically feel the brute reality of pain, the torn flesh of the earth, soaked with blood. In all, four of Kapoor’s sculptures have been brought to the museum. 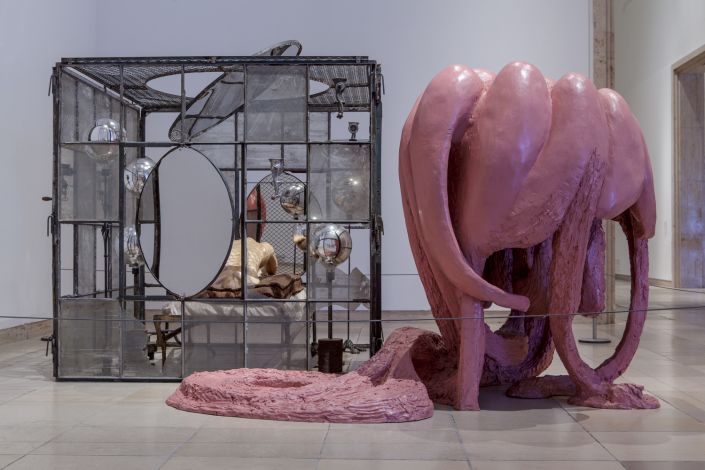 Louise Bourgeois is one of the most enigmatic artists of the 20th century. A total of 80 works by the French-American artist have arrived in Moscow from Munich's Haus der Kunst art museum.

The Moscow retrospective focused on one of Bourgeois' key themes – cells. She considered the cell a symbol of the pain and psychological trauma she received in her childhood that became the driving force behind her art.

Languishing in these toy dungeons are the stumps of body parts, dolls, guillotines, mirrors – in a word, the whole horrible baggage of the author's subconscious.

In the courtyard of Garage is the artist’s cult sculpture Maman – a giant steel female spider, which embodies the caring motherly essence.

In the hangar, a huge mirror turns, reflecting the title of the work: Has the Day Invaded the Night or Has the Night Invaded the Day? – another mystery by Bourgeois that addresses the viewer's subconscious.