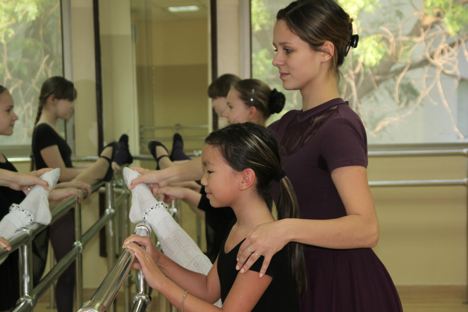 Alessandro Belli
New students at the new ballet school which has opened in India will have a professional teacher and choreographer from Russia, Yulia Perevedentseva, training them.

The Russian Ballet School, which is unique to India, has begun recruiting students. The students will be able to boast of having a professional teacher from Russia. RIR learned about plans for this school from Fyodor Rozovsky, director of the Russian Centre of Science and Culture (RCSC) in New Delhi, and choreographer Yulia Perevedentseva.

More than 20 students, from India, Russia, Japan, and Kazakhstan, have been admitted by the Russian classical ballet school functioning at the RCSC in the Indian capital.

“This year, we plan to recruit no more than 70 students,” said Rozovsky. He admits this will not be an easy task because, at least in Indian megacities like New Delhi and Mumbai, there are always long waiting lists of students wishing to enter ballet schools.

Perevedentseva said the children would be selected through a competition.

“We have three groups; junior, middle, and senior,” she said. “These will be composed of children below six years old, under 10 years old, and over 14 years, respectively. Children of other ages will be distributed among these three groups,” she said.

The choreographer added, “ballet requires discipline”. We wish to see hard-working children. Without hard work, it is impossible to reach the top in ballet.”

To the question of whether Indian children who come to study ballet, are different in any way from their Russian counterparts, she responds in the negative.

“Children are the same all around the world. Younger ones need to be motivated in a playful way, whereas the older ones know why they came here. It is not true that ballet is alien to India, that here things are different,” the choreographer said.

Ballet with a history

“I started to dance when I was four years old,” Perevedentseva said about herself.  Indeed, in Russia, parents bring their children to study ballet or gymnastics when they are the 3-4 years old, or a bit later. Russian girls usually learn fundamental elements of dance before they learn their ABC’s and start reading.

At age 11, Perevedentseva began studying at the Studio School in the Igor Moiseyev State Academic Folk Dance Ensemble. Founded in 1937, this team of professional choreographers aims to interpret and promote folk dances of peoples of the world, including Jewish, Mexican, and Greek dances, as well as dances of peoples in CIS countries.

She went on to obtain a higher education; in some ways, an “elite education;” at the Moscow State Art and Cultural University. In Russia, this institution is considered very special, being one of the few that trains teachers of Russian classical ballet, who are in high demand across  the world.

“She graduated with honours. She came to us with recommendations as the best student in her class,” said Rozovsky.

Now, for the first time since the collapse of the Soviet Union, ballet in India will be taught by a professional Russian choreographer. For now, no other school in India can boast of this.

In just one year

Ambitious goals have been set for the school’s staff. They have promised that the first students will be graduating in just one year.

“The fundamental elements of ballet a child learns during the first few months. Six months later, the children are already advanced enough to dance compositions they created themselves. However, to achieve real quality results requires about one year,” said the choreographer.

“A gala concert will be performed on the RCSC stage (consisting of special compositions),” once the year is over, promised Rozovsky.

Perevedentseva also promised to include modern and folk dance elements in the ballet compositions. “But the foundation, of course, will always be Russian ballet,” she explained. “After all, this is what the children are coming here to study.”

“To learn the traditional kind of dancing, we invite all students of the Russian language. This will be provided for free,” said Rozovsky. “People can participate in modern dancing twice a week.”

Modern dance (Modern Jazz and Contemporary) will also be taught, and people can come twice a week to practice.