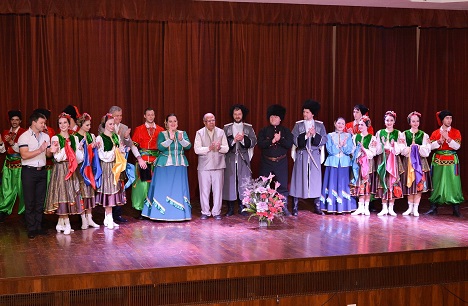 The Cossack Dance Ensemble “STANITSA” from Russia held the audience in thrall.

A colourful function was held to mark the 90th anniversary of VOKS-SSOD-RAMS-ROSZARUBEZHCENTER-ROSSOTRUDNICHESTVO at the Russian Centre of Science and Culture (RCSC) in New Delhi on November 17, 2015.

A Photo Exhibition on “90 Years of Russian Public Diplomacy” was inaugurated by H.E. Alexander M. Kadakin, Russian Ambassador to India. More than 40 historic photos depicting the organization’s activities were on display. This was followed by a spectacular performance by the Cossack Dance Ensemble “STANITSA” from Russia (Kuban Region-Krasnodar), which held the audience in thrall.

The cultural performance, rich with Russian folk songs synchronised with dances by artists in attractive costumes, was a feast for the eyes and ears of the large gathering comprising diplomats, compatriots, artists, students, educationists, media persons and others.

After the performance, the artists were felicitated with bouquets presented by Basu and Rozovskiy.

‘STANITSA’ also performed at the Jawaharlal Nehru University on November 18, 2015, and will give a performance at Mumbai on November 19 to mark the 40th anniversary of the RCSC, Mumbai.