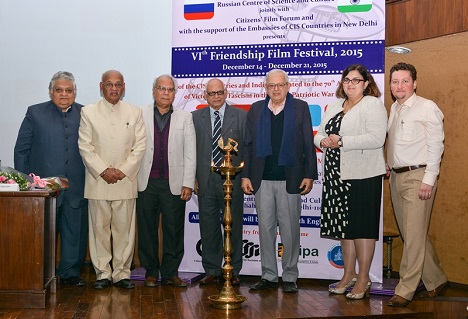 RCSC
The sixth annual Friendship Film Festival at the RCSC in New Delhi on began on December 14, 2015 and will continue till December 21.

The Russian Centre of Science and Culture (RCSC), Embassies of CIS countries and the Citizens’ Film Forum (CFF) launched the sixth annual Friendship Film Festival at the RCSC in New Delhi on December 14, 2015. The festival was dedicated to the 70th Anniversary of the Victory over Fascism in the Second World War.

Jointly organised by the three entities, the film festival also marked the 90th Anniversary of Russian Public Diplomacy and the RCSC Delhi’s 50th Anniversary. The festival started with the film “Raj Kapoor: Comrade Awara”, and will conclude on December 21. All films being screened at the festival, from Belarus, Uzbekistan, Armenia, Kazakhstan and Kyrgyzstan, apart from Russia and India, will have English sub-titles.

Inaugurating the film festival, Kaul lauded the organisers’ initiative as a novel step to promote good cinema and inculcate modern cinematography, cinematic trends and technologies in the minds of the new generation. With his wide experience as a jury Member in several national and international film festivals, Kaul regretted that while films made in India are widely available to viewers in Russia and other CIS countries, the Indian public is deprived of films made in those countries. The Friendship Film Festival assumes relevance in the context of modern trends, life and culture and cinematographic excellence, he said.

Bose underscored the relevance of this Film Festival, relating it to the 70th Anniversary of the Victory over Fascism in the Great Patriotic War. He spoke movingly of the unique sacrifice and sufferings of the Soviet people during the war, its outcome and major impact on world history.

Mgeladze pointed out that the successful conduct of the annual Friendship Film Festivals demonstrated the growing interest of people towards cinema. Studying national cinema tradition is useful, she noted, adding that Russian films and film makers participated in three major international film festivals in India; at Delhi, Goa and Calcutta.

Describing the background of the Friendship Film Festival, Mehta referred to the tremendous response from viewers, critics and media, adding that the encouragement prompted the CFF to take the festival to other major cities in India so that people there could get acquainted with Russian and CIS movies.