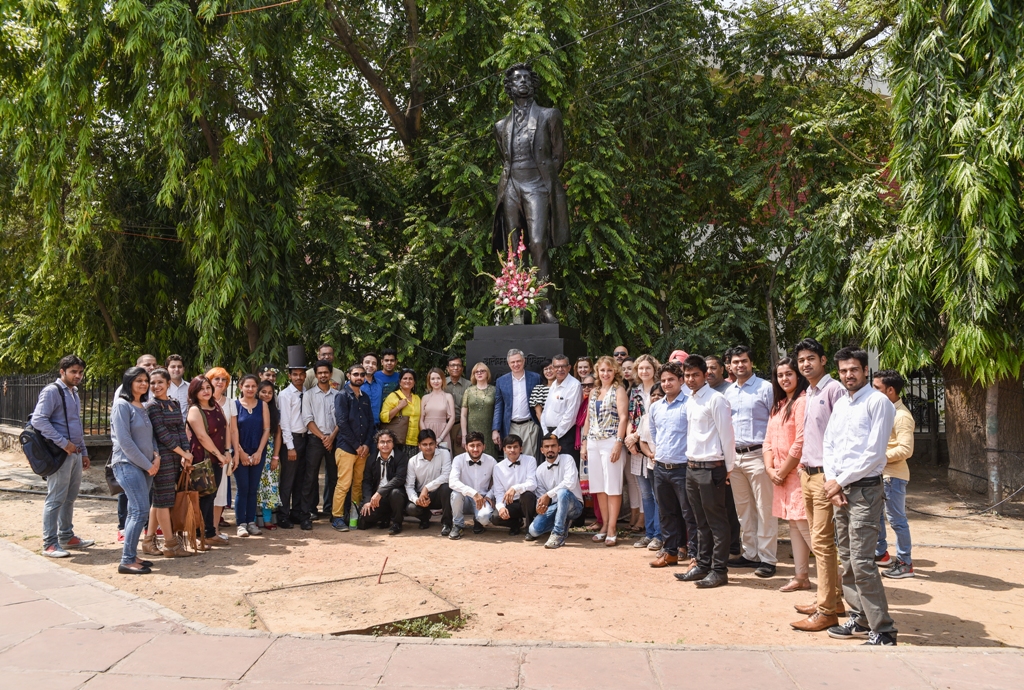 Floral tributes at the monument to Pushkin.

RCSC
Russian Language Day is celebrated to honour the birth anniversary of Alexander Pushkin, probably Russia’s greatest poet and originator of modern literary Russian language. In India, the day was marked at the Russian Centre of Science and Culture in New Delhi.

The floral tribute was followed by the Literary Carnival “Here Everything Breathes Pushkin”. The programme comprised a poetry recitation competition, a quiz on Pushkin, a literary carnival and parade of Pushkin’s characters.

Perova spoke of the significance of the Day of Russian Language, coinciding with Pushkin’s birthday. Shipilova dwelt on Pushkin’s literary career and how he was a poet of the world. Participants included students from Jawaharlal Nehru University, Delhi University and the IRL, RCSC, who recited Pushkin’s poetry brilliantly in the Russian language.

The poetic and musical performance based on Pushkin’s writings by Indian students of Russian language and presentation of characters from Pushkin’s works in their original costumes was impressive. The students recited Pushkin’s poetry not only in Russian, but also in Hindi and English.

The winners of Russian language competitions and the literary quiz were felicitated with certificates, trophies and Russian souvenirs by Kumar, Suryanarayan and Rozovskiy.

The Russian President signed a Decree in 2011 establishing Pushkin’s birthday on June 6 as the Day of Russian Language, which is how it is now celebrated in Russia and abroad. Russian is one of the major languages of the world and the most wide-spread of all the Slavic languages. It is also the most common European language from the geographical point of view. According to the latest data, over 150 million people in the world are Russian speaking, while more than 100 million speak Russian as a second language