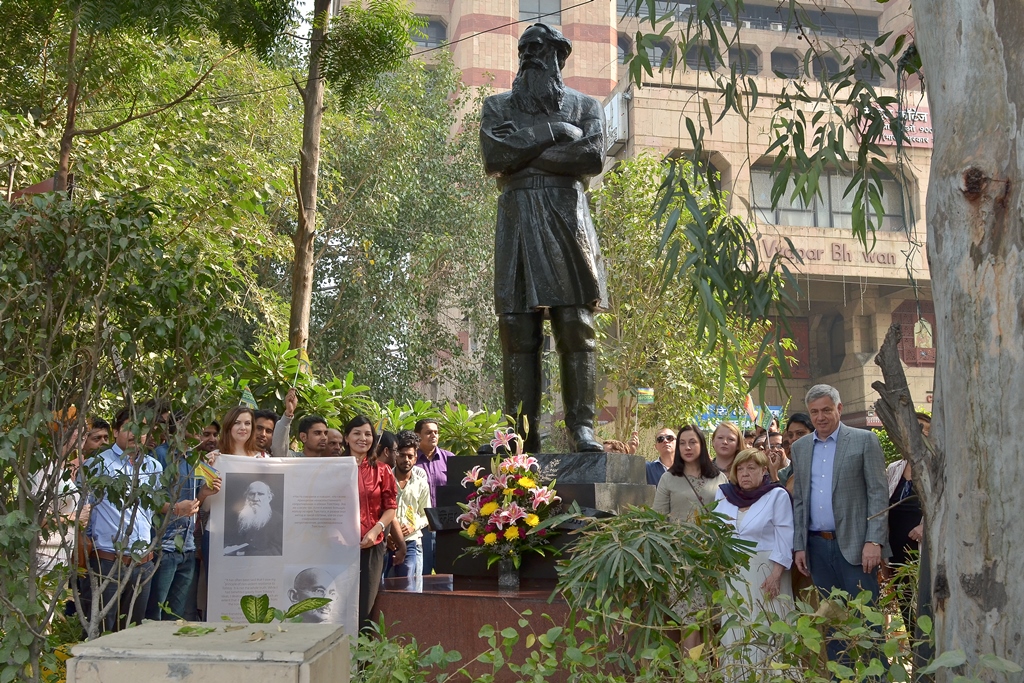 The expedition began with a ceremony paying floral tributes at the monument of Leo Tolstoy on the Tolstoy Marg in New Delhi.

RCSC
An educational, cultural and peace-keeping mission, inculcating the high moral values of Leo Tolstoy and Mahatma (Mohandas K) Gandhi has been launched in India, as part of the Festival of Russian Culture in India.

An educational, peace-keeping and cultural expedition called “Great Moral Path: Great Peace-Makers Leo Tolstoy and Mahatma Gandhi” was launched within the framework of the Festival of Russian Culture in India, on November 14, 2016. This is also part of the long-term international cultural peace project “Discover the goodness of his heart” organised by the Regional Public Organisation (RPO) ‘BRICS World of Traditions.’ The event is taking place with the assistance of the Russian Ministry of Culture and is supported by the Russian Ministry of Foreign Affairs and ROSSOTRUDNICHESTVO.

The expedition began with a ceremony paying floral tributes at the monument of Leo Tolstoy on the Tolstoy Marg in New Delhi. Among those who attended the ceremony were representatives of the Gandhi Memorial Museum, the Indian Association of Teachers of Russian Language and Literature, the Indian Association of Russian Compatriots, Parichay Sahitya Parishad, Ekaterina A. Tolstaya, great, great, great granddaughter of Leo Tolstoy and  Director of the Museum Estate of Leo Tolstoy in ‘Yasnaya Polyana,’ Lyudmila L. Sekacheva, President of the RPO ‘BRICS. World of Traditions’, Purnima Anand, President of the BRICS International Forum (India) and the International Federation of Indo-Russian Youth Clubs,  Sergey V.Karmalito, Senior Counsellor at the Russian Embassy in India and  Fedor A.Rozovskiy, Director of the Russian Centre of Science and Culture in New Delhi, and other diplomats, teachers, students and representatives of Russian and Indian media.

Members of the Russian delegation met with representatives of the National Gandhi Museum on November 15 and, from November 16 to 21, will visit Mumbai and Pune.

A seminar; “Leo Tolstoy and Mahatma Gandhi: a Unique Heritage” and an exhibition of rare materials from the Museum Estate of Leo Tolstoy in ‘Yasnaya Polyana’ will be held at the Russian Centre of Science and Culture in Mumbai.

A press conference will be held at the Museum of Mahatma Gandhi at Mani Bhavan in Mumbai. A cultural and educational campaign under the entitled “More than a Century without Leo Tolstoy” in the Mahatma Gandhi Memorial Museum in Pune, and a concert, “Friendship of People,” will be held by the St. Petersburg State Song and Dance Ensemble “BARINYA” (Lady), while other programmes are also being scheduled.