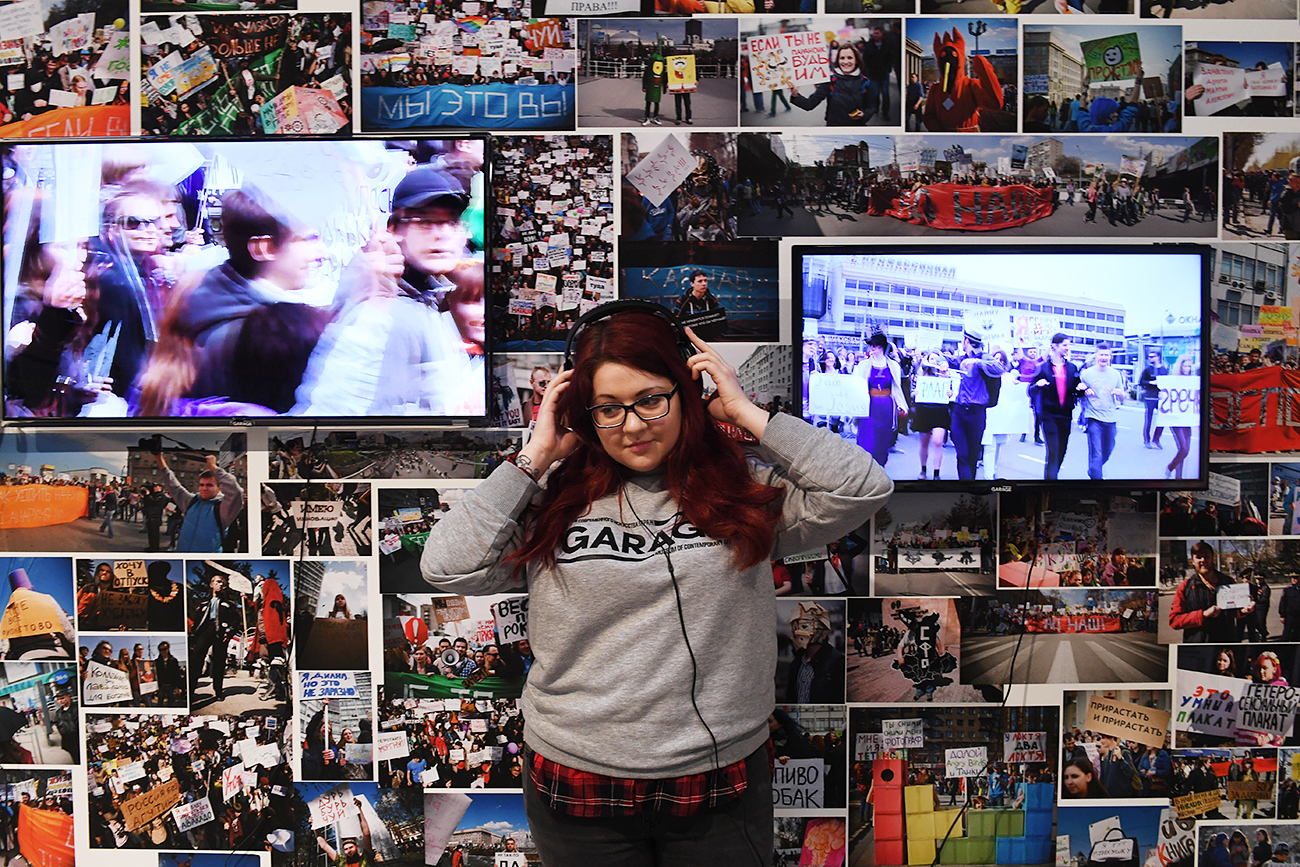 A visitor at the opening of the spring exhibition season at Garage Museum of Contemporary Art in Moscow.

Vladimir Vyatkin/RIA Novosti
The curators of the Garage Museum of Contemporary Art traversed Russia from Kaliningrad to Vladivostok meeting with 200 artists. Sixty of them were invited to take part in the museum’s first triennial.

Moscow’s Garage Museum has opened its first Triennial of Russian Contemporary Art. The exhibit, running from March 10 to May 14, serves as a survey of sorts, aiming to discover new artists of great originality inhabiting the country’s vast expanse – those outside its two main cultural centers of Moscow and St. Petersburg. RBTH reviews some of the triennial’s most interesting projects.

1. The Robotic Thurible by Where Dogs Run 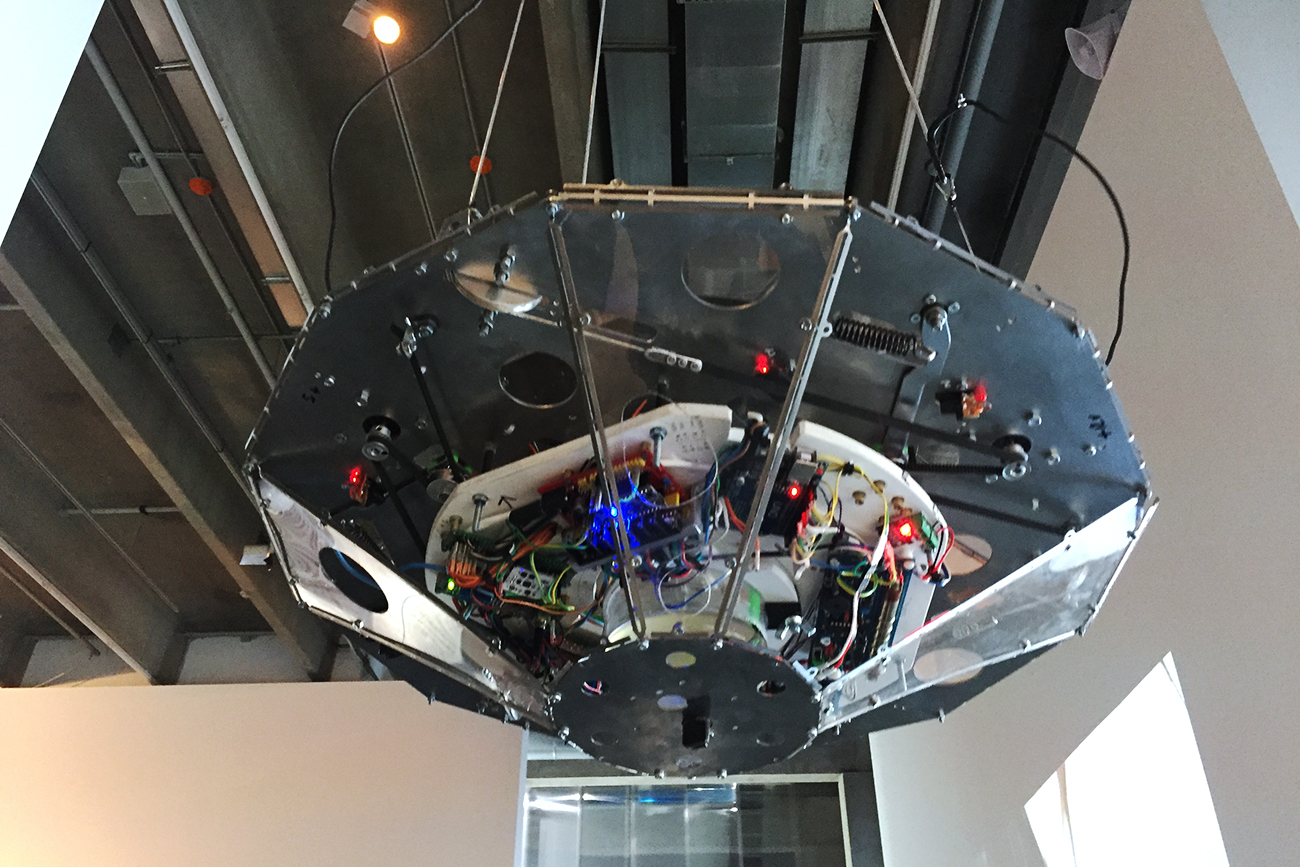 The Robotic Thurible by "Where Dogs Run." Source: Oleg Krasnov

Ekaterinburg-based artists Olga Inozemtseva, Alexey Korzukhin, Vladislav Bulatov, and Natalya Grekhova are no newcomers to the art world – they formed their art group, Where Dogs Run, in 2000, and have since managed to rise to international fame. In 2012, they were honored at the Prix Ars Electronica, one of the most prestigious awards in the field of electronic and interactive art held in Linz, Austria. Before that, their ironic interactive objects and video works had been featured at various events in Russia, the UK, Italy, Germany, France, and other countries.

The Garage Triennial spotlights their new work: A moving ‘flying saucer’ hung from a rope that regularly releases smoke, a reference to the thurible, a kind of censer – an incense container – used during Orthodox Christian rites. The work invites the viewer to contemplate the rapid re-emergence of the Russian Orthodox Church – which technically is no longer a state body – as a prominent part of modern life in Russia.

2. The kinetic sculptures of Nikolai Panafidin 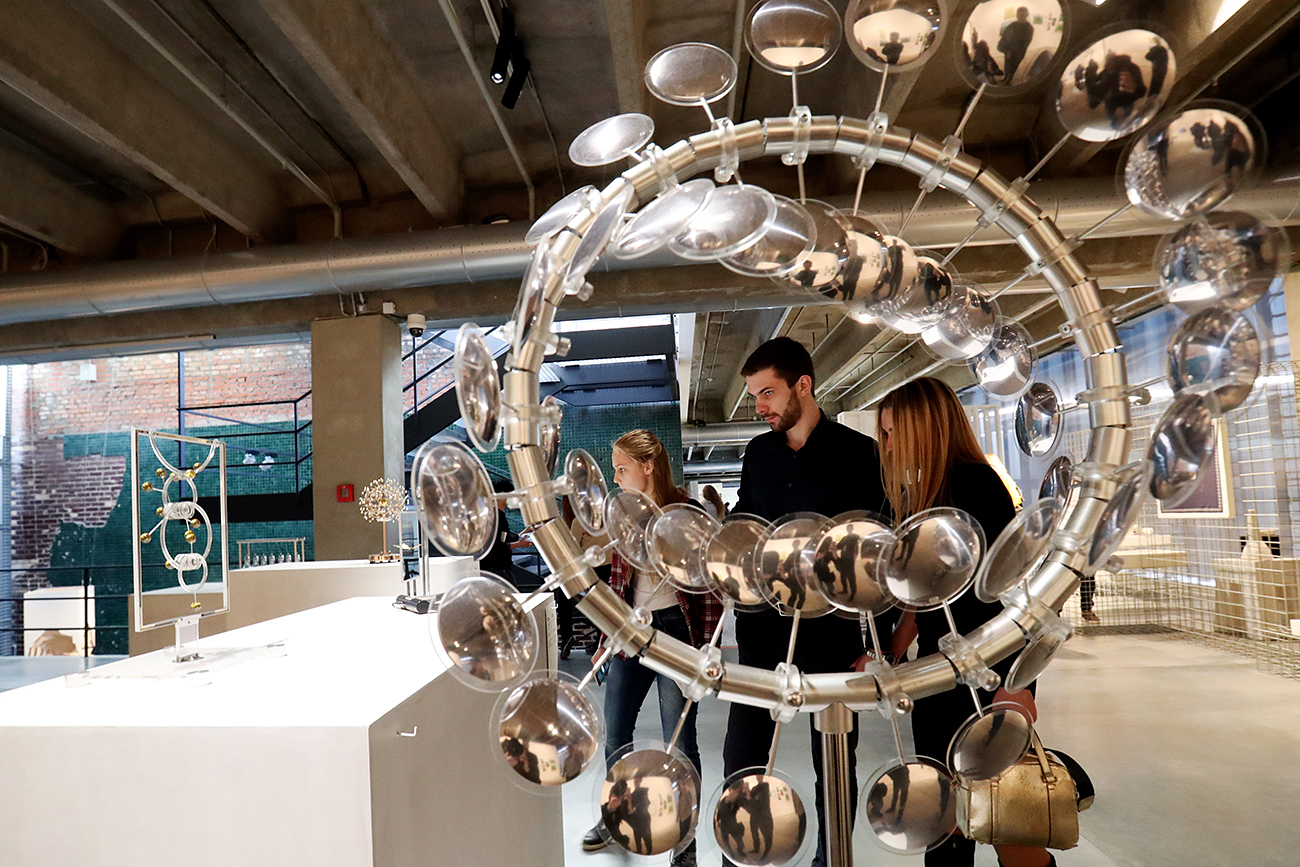 Technically, Nikolai Panafidin from Chelyabinsk isn’t even an artist – he majored as a structural engineer. But you would never know that by his incredible moving objects – kinetic sculptures – that in terms of beauty rival the works of prominent figures of kinetic art such as Jean Tinguely or Julio Le Parc. Panafidin finds inspiration in performance art: He sporadically cooperates with theater set designers and creates stage props. The Garage Museum’s curators dub him the triennial's most valuable discovery. 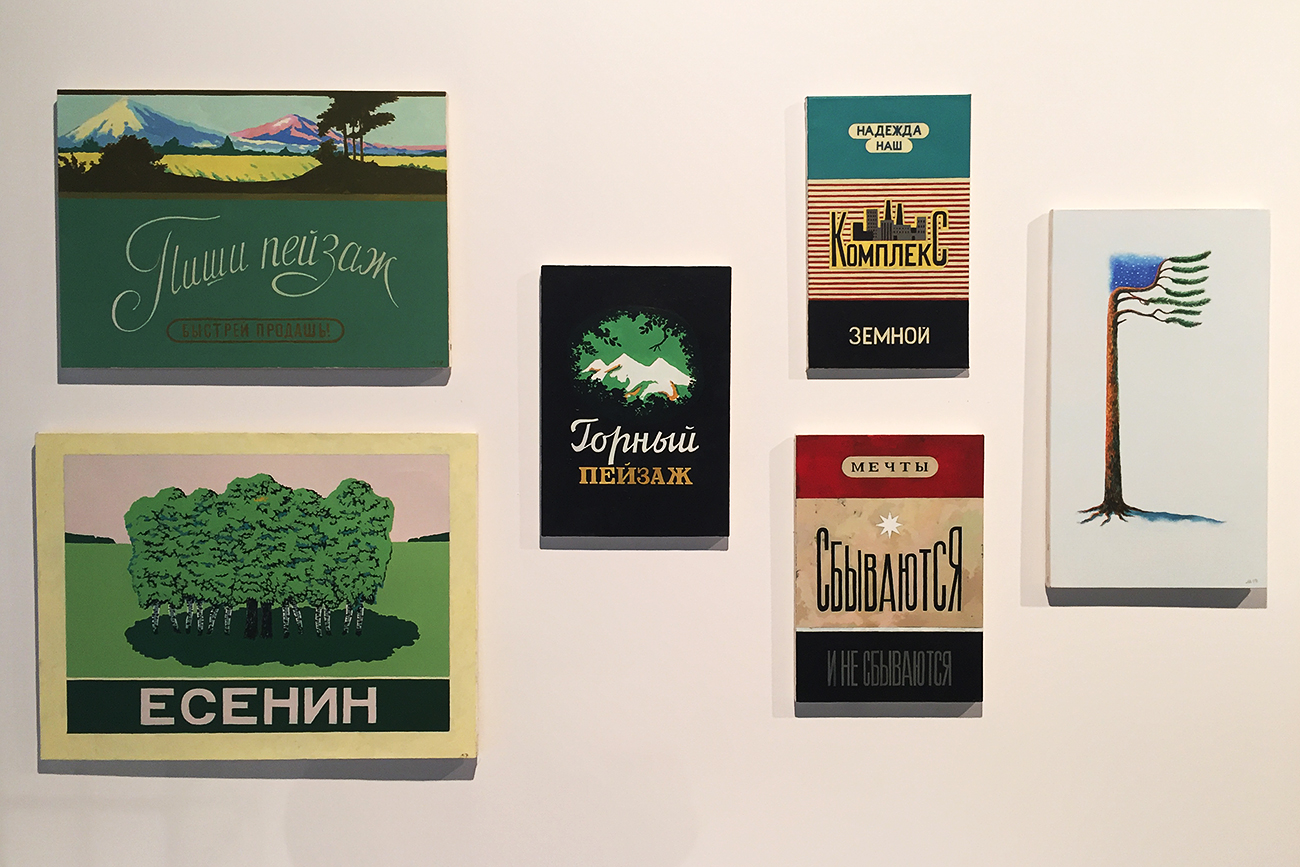 This 50-year-old artist who lives in Omsk holds most of his exhibitions at various local museums and galleries. Muratov could be categorized as a successor to Russian pop art and conceptual art traditions with a very distinct national flavor. His paintings at the Garage Museum teem with references to Soviet popular culture, including movie posters, designs of matchboxes and cigarette packs, and even typical landscape paintings popular in Russia since the Tsarist era.

4. Self-portrait in Gold by Anatoly Osmolovsky 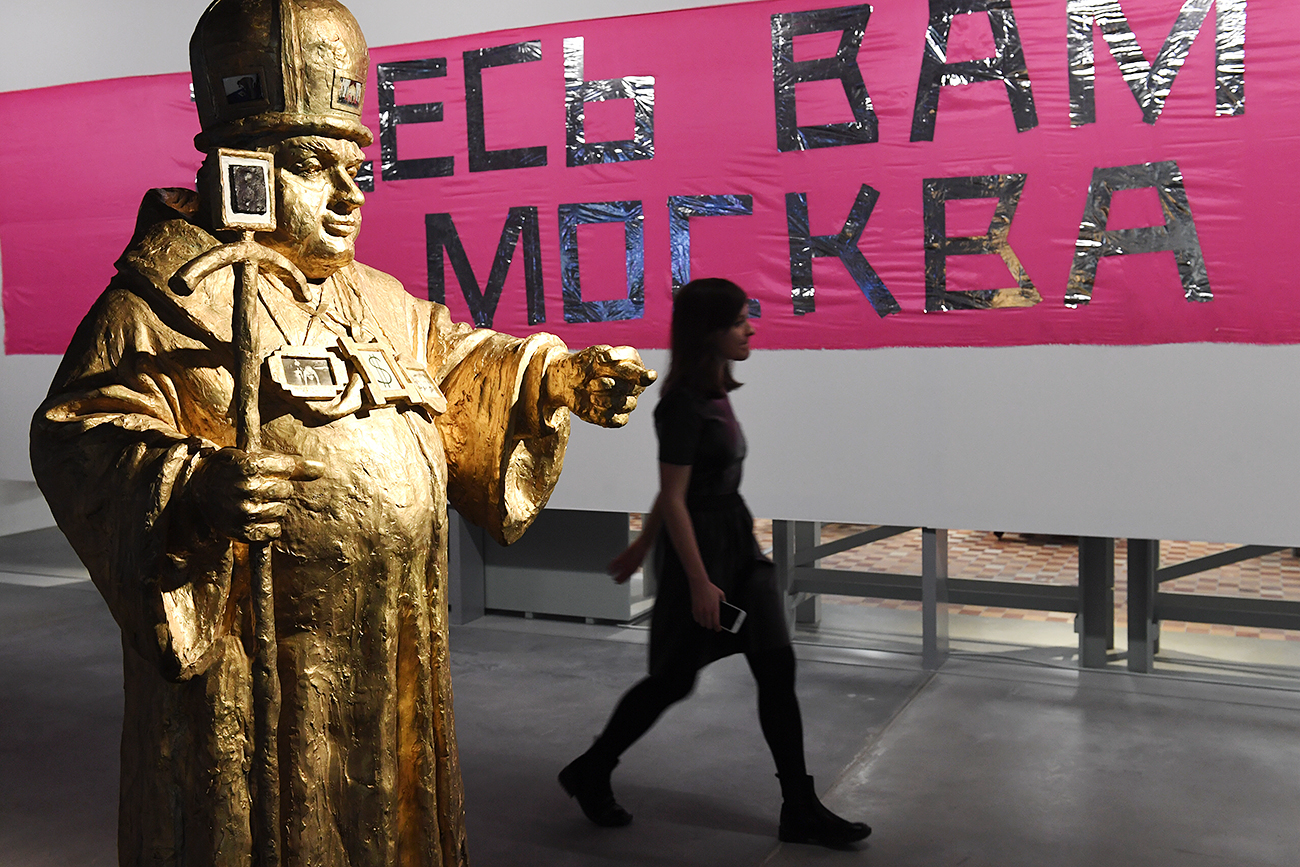 Anatoly Osmolovsky has erected an ironic, Futurist-like monument to himself, presenting the artist as a high priest. In his young years during the early 1990s, he was mostly engaged in performance art, but later switched to creating politically and socially charged objects and installations that brought him fame at numerous international events, including the Venice Biennial. At Moscow’s Triennial his works are featured in the Master Figure section where he is joined by other classics of the Russian contemporary art including Dmitry Prigov, Andrey Monastyrsky and others. 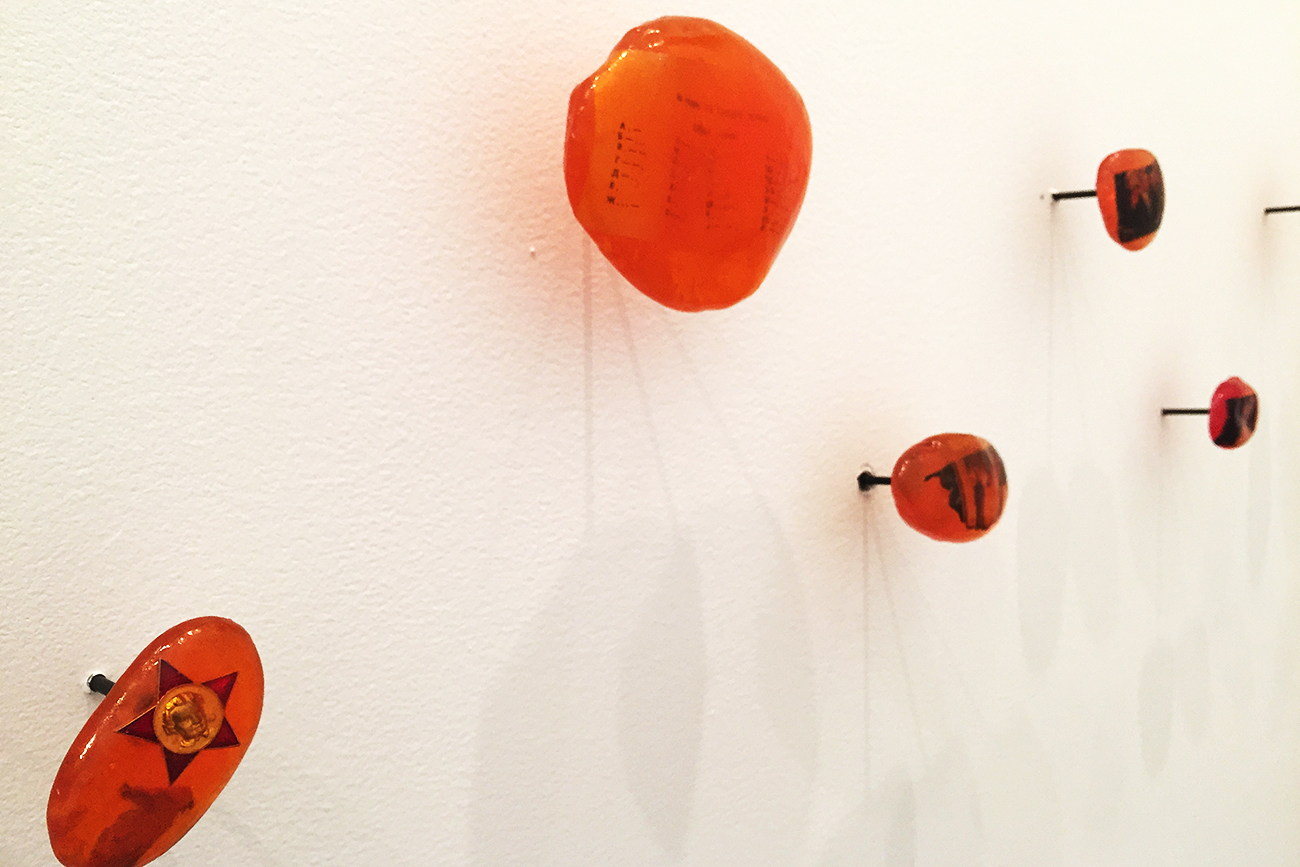 This installation by the 28-year-old, Novosibirsk-based artist, comprising various objects buried within ‘amber’, is all about memory, both national and personal. The mass of imitation epoxy resin amber holds a nostalgic yearning for the Baltic coast of the past, which in Soviet times was a popular tourist destination from where many visitors returned home with pieces of the translucent fossilized tree sap found on the beaches. The objects within – notes, tickets, a mobile phone, and dozens of other items – serve as a chronicle of one’s memories. 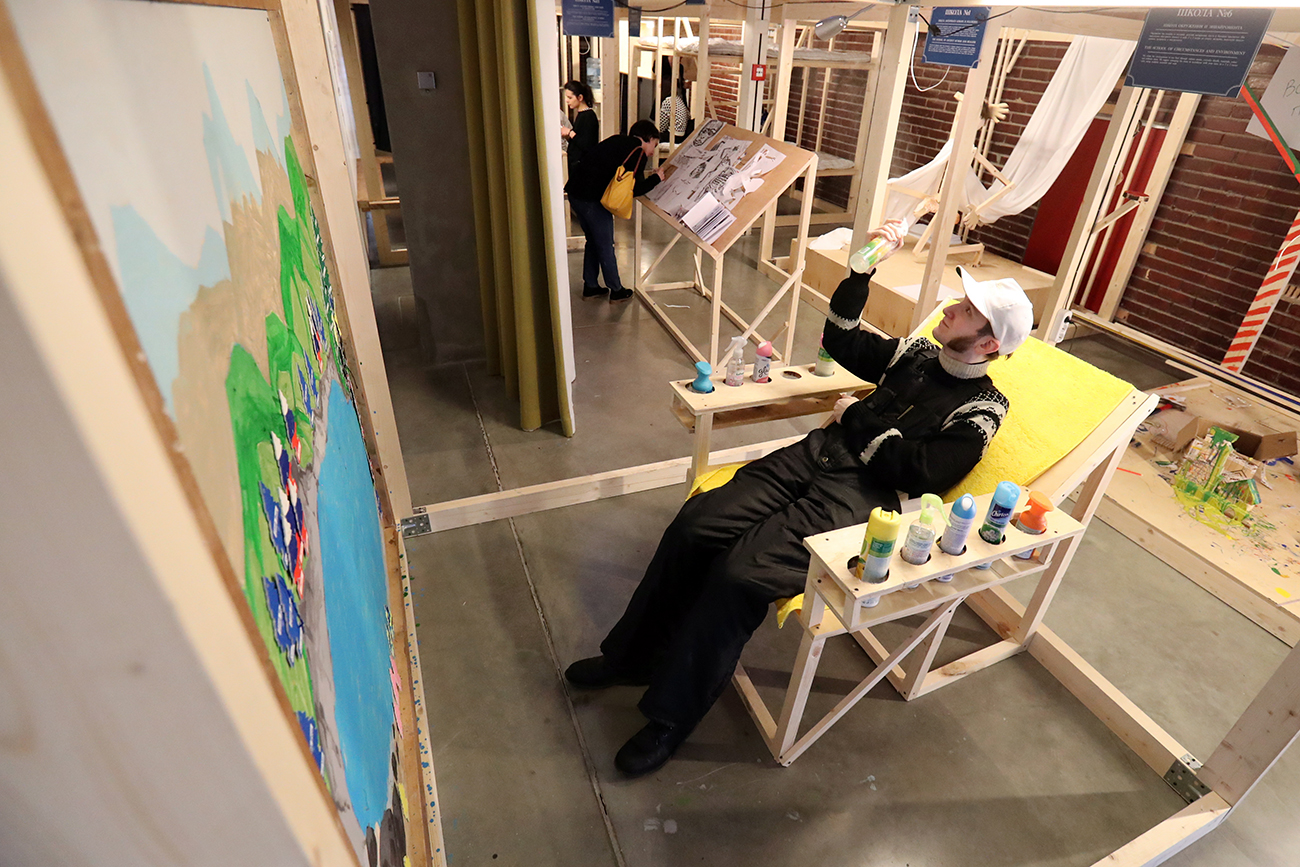 An interactive installation made of cubes measuring 1.5 meters. Each of these cubes contains a single ‘art school’ where visitors are invited to take part in a plethora of artistic activities, right there on the spot. For instance, in the Minimalism & Purity School cube, one can try to express a concept by hanging monochromic towels on ropes, while the Horizontal Video Communications School cube lets you take a selfie or record a video on a Smartphone and leave it for the next visitor to find. Krasnodar-based ZIP Group has all-but settled in Moscow. A large exhibit of theirs opens on March 21 at Moscow’s Museum of Contemporary Art.

7. Fragments of the Artist’s Studio by Mikhail Smaglyuk 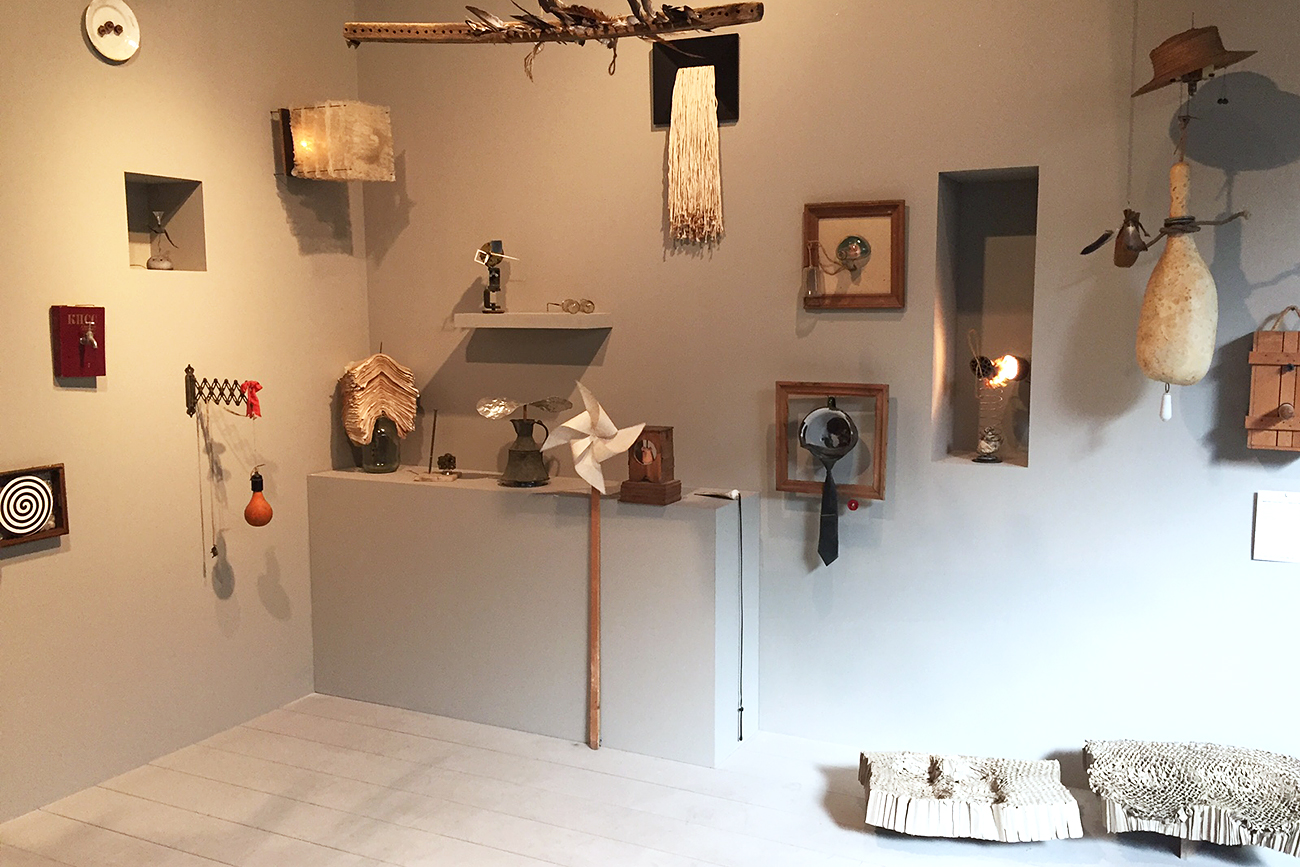 The studio of this Krasnodar-based artist may seem like a junk shop to some, or an old curiosity shop straight from the fairy tales of  E.T.A. Hoffmann or Hans Christian Andersen. Smaglyuk’s ‘personal universe’ assembles thousands of small trinkets and combines them to create fantastic objects found in the studio. Some of these wonders made it to the triennial, forming an installation.

Read more: A summer night at the movies: 6 of Moscow’s best outdoor cinemas>>>