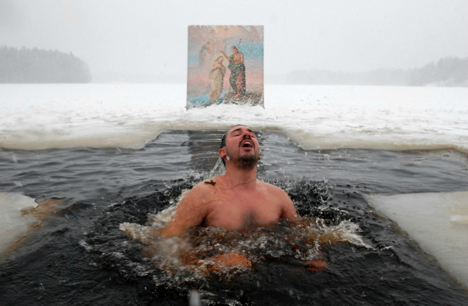 A man bathing on the Orthodox Epiphany day.

TASS
In line with the age-old tradition, people come to special baptismal holes cut out in the ice covering lakes and rivers for brief bathing in the icy water in commemoration of baptism of Jesus.

Russian Orthodox believers — and nonbelievers associating themselves with the Orthodox Christian culture and tradition — are marking the feast of Theophany (Epiphany), which is broadly known here as the Baptism of the Lord.

In line with the age-old tradition, thousands upon thousands of people come to special baptismal holes cut out in the ice covering lakes and rivers for brief bathing in the icy water in commemoration of the event of about 2,000 years ago when Jesus took baptism in the waters of the River Jordan from St John the Baptist.

Great blessing of water is taking place in churches, with believers taking the blessed water away to their homes where it is to be kept until next year’s Baptism and drunk in small quantities on very special occasions, like the illnesses of family members or times of unsurpassable problems.

The main bathing sessions take place on the night of January 18 and continue well into the small hours of January 19, as well as after the liturgies on the day of the feast.

On Monday night, the Patriarch of Moscow and all Russia Kirill I performed the rite of great blessing of the waters in the Cathedral of the Savior in downtown Moscow. Tuesday afternoon, he will perform it in the city’s Theophany Cathedral.

As he greeted the congregation on Monday, he explained for the fundamental sense of the feast.

"In the process of blessing, the water acquires particular property, the force of God’s grace, and thus the capability to deliver man from sins, illnesses and numerous everyday routine complications," Kirill I said.

"As we sprinkle ourselves and one another with that water, sprinkle our houses with it and drink it with piety, we place our faith in the energies and strengths that the Lord imparts to us in our everyday lives so that we could feel them in the most complicated circumstances," he said.

Theophany is of the main feasts in Christianity. It commemorates an even described in the Gospels and is also known as Epiphany, meaning that God made Himself manifest in three persons - the Father, the Son, and the Holy Spirit - when Jesus was receiving baptism.

More Russians skeptical about role of religion in society