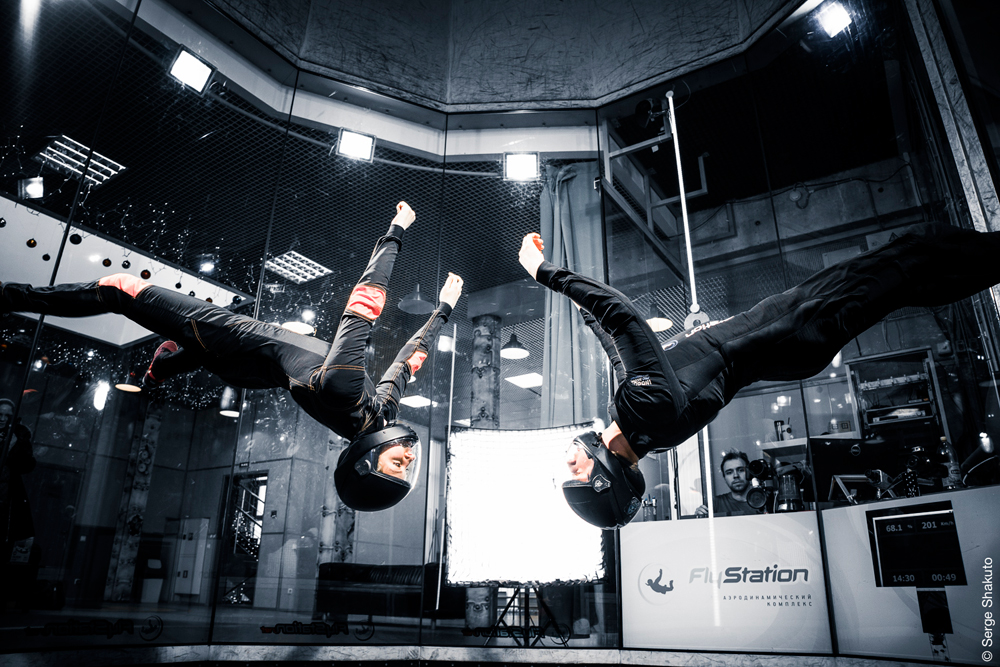 Leonid Volkov puts on a helmet and takes a step into a vertical wind tunnel, where powerful air stream lifts him up. He steals toward a transparent wall – there is a little girl on the other side of the glass. At first, he seems to be walking toward her on the ground, but suddenly takes off and does a somersault in the air. The child jumps in surprise and bursts out laughing.

Indoor sky dancing is both a hobby and a serious sport. At the end of January, St. Petersburg-based Volkov took first place in the freestyle event at the Wind Games 2016, an international competition held in Spain and attended by athletes from 18 countries. Volkov's victorious dance combined elements of Russian ballet, acrobatic moves and the flight of a soaring bird.

Pilot without a rudder

According to the athlete, the idea of flying to the music came to him when he realized that he enjoyed fooling around in a vertical wind tunnel.

From his early years, Volkov dreamed of becoming a pilot, but life turned out differently: three years at a naval college, and another five years at a military university.

However, Volkov continued to be drawn to the sky: A couple of years ago, he decided to jump with a parachute, and was told at the flying club that a vertical wind tunnel was being built in St. Petersburg.

Flying instead of sleeping

"You feel a fear that you cannot refuse," said Volkov, recalling his impressions of the first flight in a wind tunnel.

After four years of training and serving as an instructor at the FlyStation aero complex in St. Petersburg, Volkov chose the kind of air acrobatics he wanted to specialize in – freestyle.

"Prior to this, people had been flying without music. It had never occurred to anyone to use special headphones," said Volkov.

"So I started to train in tunnel dancing a week before the competition; it was then that I combined my movements with music. I had to train at night because the wind tunnel was always busy with visitors in the daytime."

There is no shortage of those wishing to make a flight with air-inflated cheeks in St. Petersburg. According to Volkov, he trains not only those for whom the wind tunnel is one-time entertainment, but also serious athletes. These are mostly foreigners who visit St. Petersburg specifically to fly in the wind tunnel; the training fee there is the world's cheapest.

FlyStation's team of coaches joke that the wind tunnel helps to develop language skills: "When you are hanging in the air with a foreigner, and you need to give him directions, you'll remember so many English words ... or you'll invent them."

Psychotherapy in a wind tunnel

According to Volkov, anyone can be taught basic movements in a wind tunnel in 10 minutes. However, to teach dancing in the air takes years. The champion says that he has to grow every day, not only physically but also spiritually.

"To get ready for the competition, you need to get rid of fear," he said.

"If you are closed – you cannot show yourself. Before, I used to worry all the time what people around thought of me, I was uptight. But the wind tunnel liberates, now I can play any role, without being shy."

While Volkov is already waiting for new indoor sky dancing competitions, he keenly remembers those who helped him win the Wind Games.

"The audience charged me with their energy," he said. "Even if I did not have time to look at the crowd when dancing, I felt it. It helped, because I do not like to dance when no one is looking at me."

He was helped with the choreography and choice of music by his girlfriend. Andrei Lementar, a coach at the St. Petersburg aero complex, taught Volkov to "moonwalk" in the air.

The secret of his champion colleague's success, according to Lementar, is that "Leonid does not leave the tunnel. Once he got there, he said, 'That's it. I will not get out of here. I am going to live here. Bring me food here.' So he went feral: He forgot how to walk, but he can fly now."