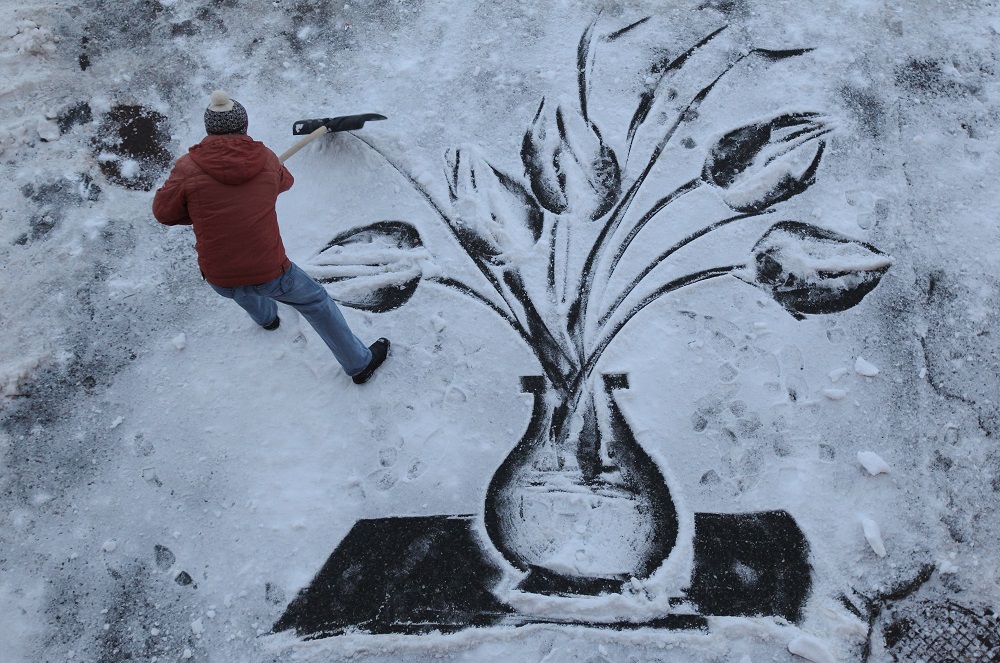 RIR
A janitor in a school at Izhevsk, Semyon Bukharin, has become the latest star on the Instagram firmament. His ‘paintings’ in the snow have delighted school pupils, who have now created an Instagram account for him. An RIR correspondent met with the artistic janitor and discovered how children helped bring out the talents of “Uncle Senya.”

While children across the country are still sleeping or getting ready to go to school at six in the morning, Semyon Bukharin cleans the newly fallen snow from the grounds of Lyceum No. 25 in the city of Izhevsk, 800 miles east of Moscow.

Then, as the first lesson begins, the school janitor takes a broom and goes to ‘draw’ his morning painting – a portrait of the Russian poet Alexander Pushkin. His effort adorns the ground under the school windows for a couple of hours before it disappears under the soles of students and parents.

A few years ago, after finishing his routine work, Bukharin took a broom and began to draw the first animals in the snow under the windows of the school. Children saw his amazing drawings and opened an Instagram account, on which they began to share the janitor's works.

As time passed, his followers grew in number, and Bukharin was noticed by the regional media.

Bukharin's characters are Russian authors, composers, and fairy-tale animals. In a conversation to RIR he said his works look best on the dark asphalt immediately after a snowfall, when the snow is soft and pliable.

He works only on fresh snow; it is impossible to draw when the snow is trampled upon. The drawings, he said, look best at night when you can see the penumbra, though unfortunately there is no one at school at that time to see them.

Jack of all trades

"Uncle Senya regularly draws something for us: in the winter, on the snow; and in the summer, landscapes on the house opposite the school," one of the school’s pupils told RIR. "He also makes ice sculptures! Last year, Uncle Senya cut three sheep from ice: He threw in some snow, made it into a cube, poured it with water and carved on it!"

Children say the "house opposite" the school is painted over every year but another landscape appears on the new "canvas" after a while.

"He also drew a giant poster of Tchaikovsky for his anniversary last year! Uncle Senya makes ice slides for us, cleans snow and keeps dogs out of the yard. He is very kind!" said a pupil.

Bukharin enrolled in art school in the city of Tchaikovsky at the age of 17, but gave it up – he was from a big family, and there was a need to find work and help his parents.

A few years later, he moved to the Far East, where he first worked as a fisherman on the Kamchatka Peninsula, and then went on to serve in the Emergencies Ministry.

For many years he moved from place to place, until five years ago Bukharin took the job of janitor at Lyceum No. 25.

Bukharin enrolled in art school in the city of Tchaikovsky at the age of 17, but gave it up. He was from a large family, and there was a need to find work and help his parents. He moved to the Far East a few years later, where he first worked as a fisherman on the Kamchatka Peninsula, and then got employment to work in the Emergencies Ministry.

For years he moved from place to place until five years ago, Bukharin took the job of janitor at Lyceum No. 25 in Izhevsk. Other than his basic work, Bukharin helps repair furniture, he fixes chairs, desks and boards. He is also involved in school life, preparing the school for celebrations and making decorations with the pupils and teachers.