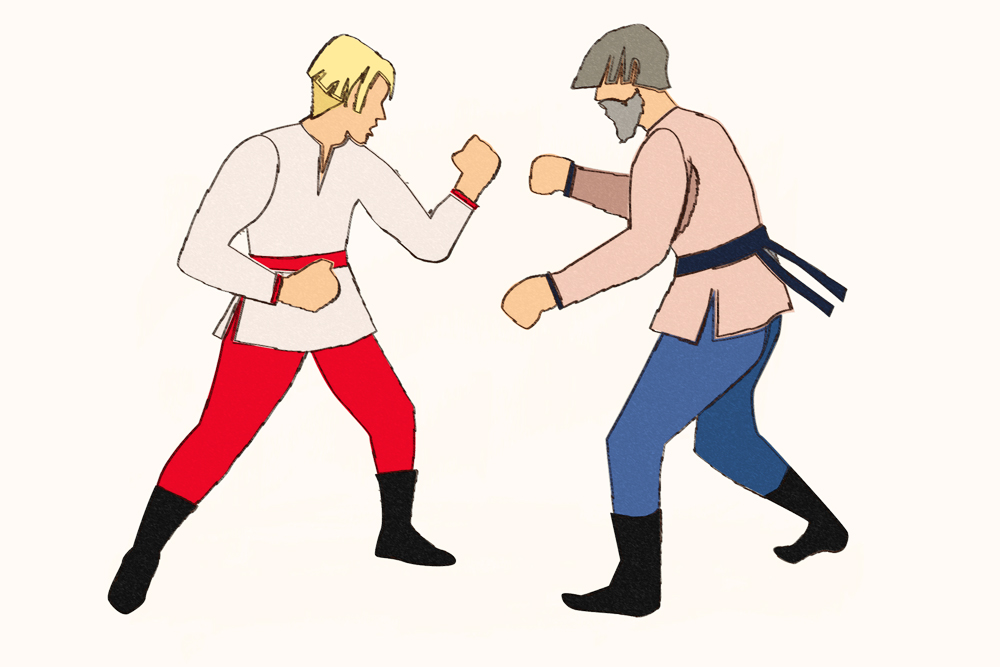 Hand-to-hand, or “one-on-one” fights were similar to modern-day boxing matches. Combatants had to remain on their feet at all times, and fighting on the ground was forbidden. Source: Alena Repkina

Football fans from Russia landed in a lot of controversy at the Euro 2016 tournament in France, when they engaged in fist fights with English supporters and locals in Marseille. That they took to their fists is hardly surprising: The tradition of resolving issues with fisticuffs has deep roots in Russian history.

Russian authorities have repeatedly outlawed fist fights in recent years. However, many rulers of Russia and the tsars were known to have enjoyed watching fist fights. Likewise, it once was not uncommon for members of the nobility to face off against common people. Such fist fights generally ended in communal heavy drinking.

Russians began using their fists to resolve differences ages ago. The first reference to fist-fighting is found in one of the earliest pieces of ancient Russian literature, the Primary Chronicle, dated 1048.

Nestor, the author of the Primary Chronicle, does not paint these fights in flattering terms. Nestor was a monk, and the Orthodox Church considered fist-fights to be a paganistic pastime that went against divine will.

Two centuries later, the Metropolitan Kirill went beyond simple condemnation and introduced harsh punishments against the practice, declaring that participants of bare-knuckle boxing matches would be excommunicated and that those killed whilst participating in the brutal sport would be refused a church burial. This essentially equated fighters with those who had committed suicide.

Where the fights happened

This, however, did not stop the fist-fighters. Organised brawls regularly took place all around ancient Russia, generally at large festival times and in open places. The week of ‘Maslenitsa’, a carnival of celebrations before the Lenten fast, would see people fight with particular zeal. The clashes attracted crowds of spectators, merchants did a roaring trade in mead and beer, and fireworks were sometimes put on for the occasion.

How the fights were fought

Both single combat and mass fights were conducted. Hand to hand, or “one-on-one” fights were similar to modern-day boxing matches. Combatants had to remain on their feet at all times. Fighting on the ground was forbidden. The first to fall or to admit defeat was declared the loser. In most instances, he would stay alive.

Large-scale contests also took place. Residents of neighbouring streets or villages, inhabitants of opposite sides of a river or even members of different professions were set against each other. There were two main types of these fights: “chain” fights and “wall-on-wall” fights.

The first kind is reminiscent of modern “tag team” wrestling matches. Everyone would eventually fight everyone else, and once a combatant had defeated one opponent he would face off against the next. “Wall-to-wall” fights, meanwhile, involved two opposing groups lining up in rows to face one another, allowing tired participants to drop back and regroup whilst the fight continued.

How dangerous were the fights?

Mass fights were, of course, the most spectacular. They were also the most dangerous, since the rules of combat became impossible to enforce in the heat of war. Fights ended lethally with frightening regularity, in spite of measures designed to prevent such outcomes.

There were numerous such measures: it was forbidden to strike an opponent who had admitted defeat or who was lying or sitting down, as it was to hit an opponent who was heavily bleeding. Only fists were to be used, although shoulder shoves were permitted, and fighters could use both hands at the same time. The targets of choice were generally the ribs, the head and the solar plexus.

Combatants were also instructed to wear thick hats and protective gloves to soften the force of the blows that they gave and received. Unfortunately, this rule generally caused more harm than good; fighters would hide rocks or strips of metal in their gloves. Yet, however rough the fighting became, the combatants would always conclude proceedings by sharing a feast, as tradition dictated.

The social function of fighting

Bare-knuckle fighting was generally considered a form of amusement, and not taken seriously as a sport. Lapta (a sport similar to baseball) was included in Peter the Great’s compulsory training programme for Russian army conscripts; fist-fighting, on the other hand, never received such honour, even if it appeared ideally designed for military training.

Fist-fights even served on occasion, as a means of resolving legal disputes. This somewhat unorthodox form of duelling allowed plaintiffs and defendants to settle their differences directly with one another. Or, indeed, they could hire more skilled belligerents to do the fighting for them.

The reaction of authorities

An ukaz (an official imperial proclamation) was issued in the 17th century that imposed the punishment of beating with sticks on those caught bare-knuckle boxing. Repeat offenders were even sentenced to exile. Despite these harsh laws, Russia’s rulers partly turned a blind eye to the fighters’ reckless pursuits. Peter the Great was a great fan of fist-fights. He saw in them a display of Russian fighting prowess. Even Catherine II’s favourite, Count Orlov, was a distinguished fist-fighter.

Is bare-knuckle fighting still practiced as a sport in Russia today?

Bare-knuckled fist-fights were outlawed in 1917 by the Bolsheviks. Since then, the fights have never reappeared in their original form. Ancient Slavic forms of combat are still practiced in traditional martial arts clubs, but these are fairly uncommon, and organized tournaments are very rarely held.