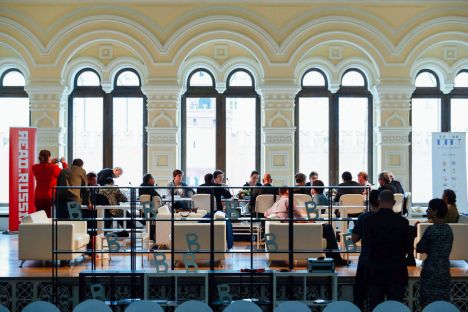 The Russian Library’s first board meeting at Moscow’s Festival of Books in June. Source: Read Russia

English language readers will gain access to a comprehensive selection of Russian literary masterpieces through a special resource, the Russian Library.

While many, many Russian masterpieces have won pride of place in catalogues of literary classics primarily because of their literary merit, and the quality of translation, they do not tell the whole story.

Each of these well-known works is only a small part of a vast, complex canon of work that has been largely inaccessible to Western readers, who have struggled to understand Russian literature without a sense of the larger narrative; until now.

Read Russia, a non-profit organisation founded in 2012 to connect readers to Russia’s rich literary tradition, has partnered with the Institute for Literary Translation in Moscow to fill in these missing blanks. The goal of the 10-year Russian Library project is to translate 125 Russian works into English and publish at least 10 print and e-books per year.

“Russian literature is...almost a natural resource,” says Peter Kaufman, executive director of Read Russia. “It’s like the ocean, and we’ve only explored part of it.”

An editorial advisory board of academics and translators will choose and vet the books, and Columbia University Press will publish the series. Board members come from institutions such as Oxford, Harvard, Princeton, Columbia, the Literary Museum in Moscow and the Institute of Russian Literature in St. Petersburg.

Studying Russian masterpieces in isolation, many Westerners don’t see that Russian literature exists as a conversation, with one work answering or challenging another.

Turgenev questions the benefits of nihilism in Fathers and Sons (1862), to which the cultural critic Nikolai Chernyshevksy responds with his utilitarian manifesto What Is to Be Done? (1863). This work in turn inspired Dostoevsky to produce Notes from Underground and Crime and Punishment, both of which emphasis moral responsibility over utopian ideals.

The library will showcase “the breadth and richness of the tradition” and will include modern works and even genre fiction, says Columbia University Press director Jennifer Crewe. Crewe also hopes English language readers will “appreciate how funny Russian literature can be.”

“We know Gogol because he’s taught, but some of the early 20th century works are really comic, and much less well known here,” Crewe says.

In upcoming meetings, the editorial board will finalize the list of works to be printed, which will require determining copyright availability and pairing the right translators with the texts. Kaufman hopes the first set of books will come out by December 2016, in time for Russian Literature Week. Held in New York City, this Read Russia event celebrates the work of literature’s backstage heroes: translators.

Literature has a daily impact on Russia, which is now celebrating its Year of Literature. Crewe, who travelled to Russia for the first time in June of this year to attend a Read Russia conference during Moscow’s Festival of Books, noticed “even the airplane next to us was called Joseph Brodsky” (under whom Crewe studied poetry at Columbia).

“It’s clear how revered the writers are,” says Crewe. “That was my standout impression of Russia.”

But while more than 40,000 English language books have been translated and published in Russia in the past 35 years, the U.S. has translated only 3,390 Russian books to English, according to the Translationum, a UNESCO data warehouse. Ultimately, the Russian Library project will help correct this imbalance in cultural understanding.

“We could say that English speaking readers have been under-served in translation,” says Kaufman. “A lot of people have this view of Russian lit of being long, depressing, macabre, but it also can be short and depressing and macabre. It reflects a history that is full of war and religion and faith and famine, crises, and at the same time...it’s the full spectrum.”

Which books should be included in the Russian library project?

"We have such riches to choose from that surely we can’t go wrong: Well-known writers and famous “big” books should mix well with strange fictions, weird heroes, and the “little” men and women whose stories are told so compellingly. There are wonderful in-between genres, part-documentary and part-fiction, or even part-poetry and part-prose, that can be much better represented in English”.

"One of the great things about the Russian Library is the sheer scope of the project. I’m excited that we’ll be able to publish a real range, from Nobel Prize winners like Bunin and Pasternak to writers less known thus far in the West, like historical novelist Leonid Yuzefovich and the great experimental poet/novelist/visual artist Dmitri Prigov".