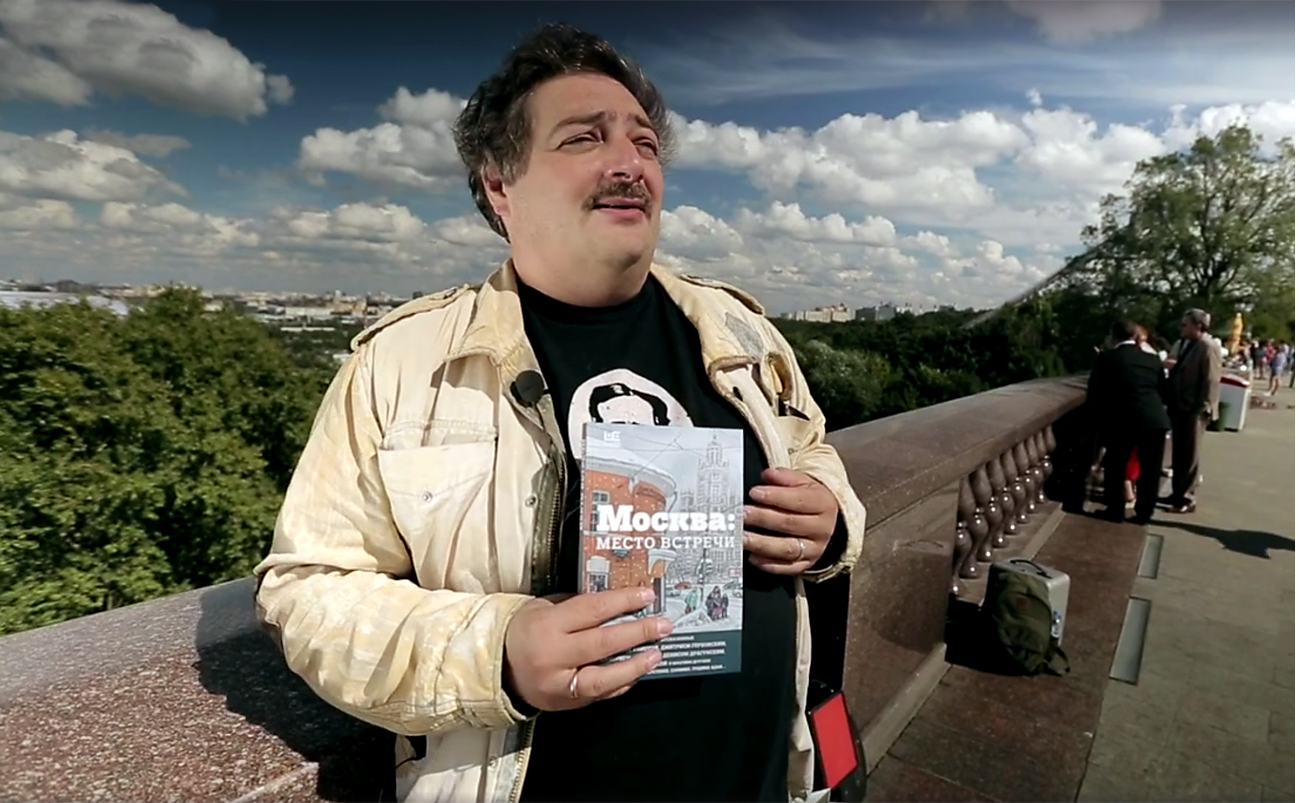 Holding the book "Moscow: The Meeting Place" in his hands, Dmitry Bykov tells about his favorite location in Moscow - the Vorovyevy Hills.

press-photo
"Moscow: The Meeting Place" (AST, Elena Shubina Publisher, 2016) is a collection of nostalgic narratives about the Russian capital. Authors, musicians, directors, artists, and many other Russian celebrities describe how the city has changed over time and reveal the mysteries of its different neighborhoods. Contributors include writers Lyudmila Ulitskaya, Dmitry Bykov, and Dmitry Glukhovsky; musician Andrey Makarevich; artist Alyona Dergileva; and director Rolan Bykov. The anthology was published in August.

For almost 870 years, Moscow has been building up historical eras inside itself, as if it were a living creature: Tsarist Russia, cozy provincialism, the might of Stalin-era avenues and skyscrapers, and many others. Moscow has been a muse for many Russian authors throughout the ages, and it continues to inspire them today.

RBTH presents excerpts from a new anthology of short stories about the capital.

View of Moscow from the observation platform on the Lenin (now Vorobyevy) hills. Source: Panthermedia / Vostock-photo

Moscow is full of small alleys and yards, and its river doesn’t flow straight, it snakes. And it is the river that defines a city’s nature. The warm Moskva river, covered completely in poplar fluff; the white moustache of foam the street sweeper leaves spreading in its wake; Neskuchny Garden, mysterious as well and almost always deserted – this is what the face of Moscow looks like, not the parades or the GUM department store. Time is like the water in a pond here; it has stopped, never to move again.

And, of course, Eros. Lenin Hills are not Moscow’s crown, but rather – how shall I say this? – they are, as Vasily Aksyonov put it, Moscow’s ‘love mound’… It is the most erotic place in all of Moscow, with Moscow State University students all over, and anyone who can't find a room; they venture into the thicket here in summer, with a very specific goal in mind. I know I did. Here, right at the spot where the Moskva makes a sharp turn, the forest begins almost at the water’s edge. You just have to go up a little bit, and you’ll find a couple of wonderful, shady glades, virtually hidden from an outsider’s view. You will not find a better place to go in a warm summer evening. What’s there to do? Anything. I kissed girls there more times than I can count, and ten times or so, there wasn’t only kissing involved. Could anyone imagine it would be so easy to find a spot to do it all right in the middle of the great outdoors in Moscow? Granted, you have to know where to go, but I grew up there, after all.

And it was there that I once tried to kiss a girl who I loved more than anyone in my whole life, which is rather long by now. There was no one I loved or hated more than her. It went on for seventeen years, and it was worth it.

Watch the video of Bykov walking around Moscow (in Russian) here>>>

I could never express the feeling of Moscow I had when I was six to eight years old. The city was so utterly mine, I found it natural to just lie down anywhere and go to sleep – well, I was tired sometimes. I knew some places where I could hide, places where I could see things little kids were not supposed to see. None of us had any trouble finding our way around in Moscow. My older brother had this thing when he just said: ‘Let’s go on a journey through Moscow.’ And somehow, he always had to take me with him in winter. Within thirty minutes, I was freezing, so he would yell at me, but he would take me to museums, or just show me around the city – and thanks to him, I discovered a great deal of things. It was incredibly interesting to go for a walk with him – he could see things I could not. I learned a thing or two from my brother, and now people say that I’m an interesting person to go for a walk with, too.

Moscow is in my heart, it’s in my veins, in my very essence, and it’s probably the reason why the first thing I said when I first came to New York City was: ‘Hey, this city is mine!’ It has the same rhythm about it. We never pay attention to the rhythm a person lives in, and that's important.

I have several Moscow secrets of my own, such as St. Basil’s and the Gogol statue. There was one time when I, a young man in love, was coming back home to Zatsepa Street at about three o’clock in the morning, passing through the Red Square. It was in summer. So, there I was, walking up from the Historical Museum towards Balchug, and St. Basil’s was right there on high — when it’s dark, you can’t see the cathedral at all. But as you are coming closer, with each step it emerges, like an image on developing film, it appears in all its insane glory. That morning was the first time I noticed it. It’s the magical mystery of this monument, which is incredibly Russian in its architecture, combining different elements harmoniously, just like Moscow itself.

I was thirteen or so when we moved to Ostankino. That means it was 1992: the Soviet Union had just fallen; there were hotbeds of free trade popping up around metro stations, selling anything from handcuffs to mink coats; it was now dangerous to go outside after 9 p.m.; and the entire imperial infrastructure was left to itself and starting to rot, including cultural temples.

But, unlike your precious Arbat or Tverskaya-Yamskaya Street, dilapidated and looking well-matched with the hobos and crippled veterans who congregated there, VDNKh only got better because of the state's neglect.

I first got to know the place when I was still in the middle of my sunlight-and-concrete-filled Soviet childhood, but it wasn’t love yet, just a kind of childlike wonder. It was when I was a teenager that I really fell in love with VDNKh. We got a dog then, and I had to walk it. There were, of course, Dzerzhinsky Park and the Botanical Garden right next to us, but how could either of them match VDNKh? There is probably no other place where I spent as much time – by myself, with my brother or with my friends – as there.

We never came in through the central entrance, we used the rear Khovansky gate instead, going from our apartment blocks past the very bourgeois townhouses belonging to cosmonauts, which were perfectly visible from the street. Then we plunged down the little asphalt streams flowing beyond the main paths, under the bushy trees, and on we went to get lost somewhere.

This was the best way to explore VDNKh, with no set route in mind, just going anywhere you wanted – this way, you could surprise yourself every time by finding something new.

What do you know about VDNKh, anyway? You’ll likely name the Cosmos hall, or something like The Friendship of People fountain – which means you don’t know anything.

Me, I knew nothing, too.

So I, like Christopher Columbus, discovered new wonderful islands in that sea of whispering trees, because VDNKh is chock full of strange, inexplicable constructions, the likes of which you won't find anywhere else on Earth.

Muscovites in photos shot and colored in 1931