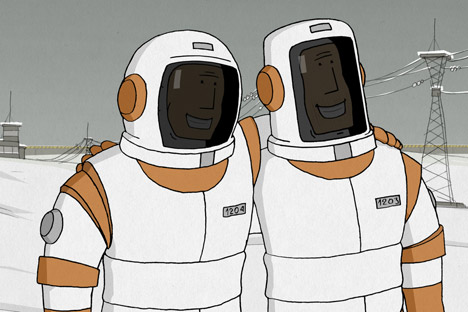 “We Can’t Live Without Cosmos” by Konstantin Bronzit.

The Russian animated film, “We Can’t Live Without Cosmos” by Konstantin Bronzit, has been nominated for an award in the "Best short film, animated" category according to the official Oscar website. Nominees were announced on January 14 in Beverly Hills.

"We Can't Live Without Cosmos" tells the story of two friends who have dreamed of becoming astronauts since childhood and do everything possible to achieve this goal. The 15-minute film was produced by Alexander Boyarsky and Sergei Selyanov. Along with the Russian cartoon, other nominated entries in this category include "Sanjay's Super Team" by Pixar, Chile’s "Bear Story," the Canadian-British project "Prologue" and the American short film "World of Tomorrow."

The Oscars will be announced at a ceremony on February 28 in Beverly Hills.Video by YouTube/Aleksey Dementyev

Read more: Celebrated Russian animator on his latest film and the end of cinema>>>