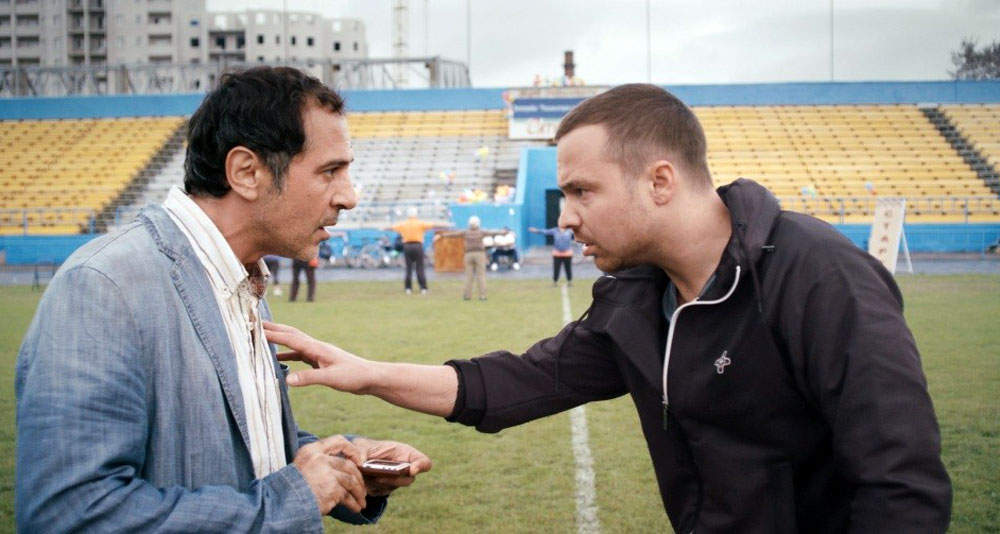 Kinopoisk.Ru
New Russian movies will be available for streaming online with English subtitles as part of the Dubl dv@ (Take Two) film festival from April 11-22. We have selected the five most interesting movies from the program.

After Nurik, a native of the Caucasus, falls victim to skinhead Yaroslav in a racist attack, he returns to the world right away as… Yaroslav’s guardian angel. Tangled together in a mystical way, the two are forced to come to an understanding.

The film is the feature debut of director Yevgeny Shelyakin – best-known in Russia as a scriptwriter for TV sitcoms. After the premiere the film was described as a “hymn of political correctness” and even taken as Russian response to French hit Untouchable. These epithets to some extent are fair, though Shelyakin took his inspiration for this melodramatic comedy from Soviet film classics.

Making a biography of the great Danish storyteller Hans Christian Andersen was one of the great ambitions of Russian director Eldar Ryazanov. The creator of Soviet classics such as The Irony of Fate and Office Romance got the chance to fulfill his dream only at the age of 78 – for a long time the resources were unattainable for such complex production.

His age has affected the picture, which doesn’t feature the director’s characteristic delicacy: It has been displaced by philosophical contemplations on the purpose of life. Nevertheless, Russian critics agree that the movie is one of the most significant of the last decade.

One of the best qualities of Daria Poltatskaya’s directorial debut is its visuals. Moscow here is shown in its breathtaking beauty, which surpasses any sense of alienation in the viewer.

The main characters are provincial girl Masha, a former trader from a Moscow market whose lover has set her up with a job at the Federal Migration Service (FMS) and illegal Tajik immigrant Khasan, whose dream is to return to Dushanbe.

Khasan doesn’t feel he belongs anywhere – he works for the FMS, leaking information on other illegal immigrants. Maria has no more rights than he does – her lover who brought her to work in the civil service is shot during a raid and in no time she herself is asked to move out of his apartment. One day their fates collide – and in the most peculiar circumstances.

The story of the encounter of two geniuses of the Russian avant-garde. In the 1920s Marc Chagall returned to his hometown Vitebsk (now part of Belarus) to found there an art academy and turn this provincial town into a small Paris. Other avant-gardists soon followed and settled with him in Vitebsk, including Kazimir Malevich, who joined the group having already conceived Suprematism – that is, as an already formed artist. “Catch up with me” he would say to everyone, including Chagall. After this there was only space for one of them in the group.

This grand-scale film by Alexander Mitt is perhaps the first case in the history of Russian cinematography in which a high-profile director interprets the history of the Russian avant-garde using profound portraits of its main representatives.

A political scientist, a patriot, a pop diva and other characters are in a talk-show studio with the host, discussing the person and heritage of, perhaps the most famous Russian saint, Sergei Radonezhsky. In the middle of the recording, the host unexpectedly finds out that his program is to be closed. Deciding there is nothing he can do to ruin his position he risks it all and reveals everyone for what they are – the church, the government, his guests in the studio. But the effect appears to be not the one he was expecting of this reckless game.

The film is by Vladimir Khotinenko, one of the best-known Russian directors of the “new wave” that originated during the disintegration of the USSR. For Zerkalo Dlya Geroya (“Mirror for the Hero”) he received the Vittorio De Sica Prize in 1987 in Italy.