Hot on the heels of Russia’s Revolutionary sculptor, Ivan Shadr 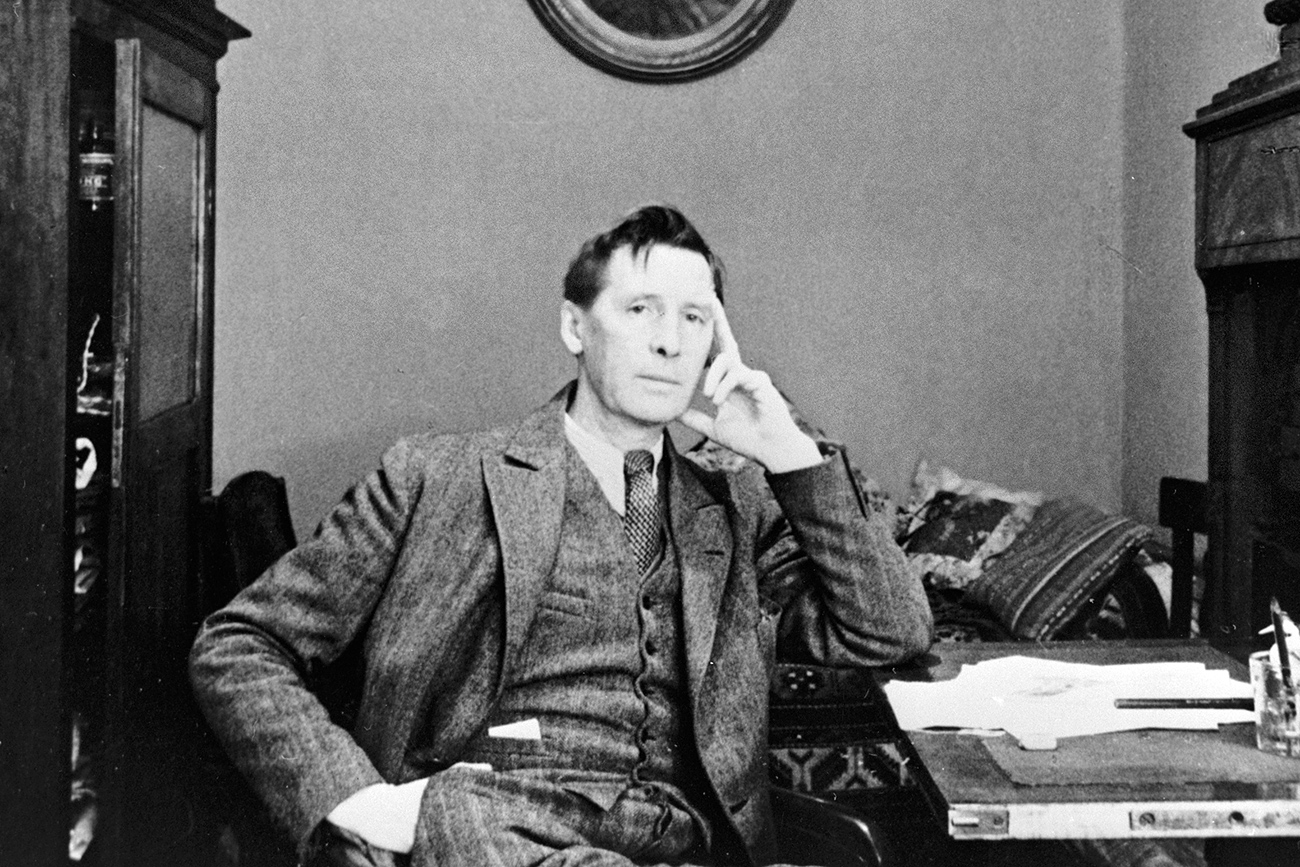 Shadr was talented in many ways. Alexandrinsky Theatre director, Mikhail Darsky, was impressed by his singing ability, and the painter Ilya Repin complimented Shadr on his artistic skills. The peasant boy, however, decided to focus on sculpture.

RIA Novosti
The creator of many Lenin monuments would have turned 130 years old on Feb. 11, and to celebrate the occasion RBTH makes a list of Shadr’s most important contributions to Russian art history.

Ivan Shadr (1887-1941) was born a peasant’s son in the tiny Ural region town of Shadrinsk, 1,200 miles east of Moscow. His real name was Ivan Ivanov, but he took his pseudonym from the name of his hometown, and at the age of 20 he set out to seek his fortune in the Russian Empire’s capital, St. Petersburg.

Shadr was talented in many ways. Alexandrinsky Theatre director, Mikhail Darsky, was impressed by his singing ability, and the painter Ilya Repin complimented Shadr on his artistic skills. The peasant boy, however, decided to focus on sculpture.

After completing studies at Nicholas Roerich’s school in St. Petersburg, and after an internship at Paris’s Académie de la Grande Chaumière under Rodin and later at the Rome Academy of Arts, he returned to Russia to become one of the Revolution’s main artistic voices.

Ahead of Shadr’s 130th birthday, RBTH looks at the sculptor’s best-known works. 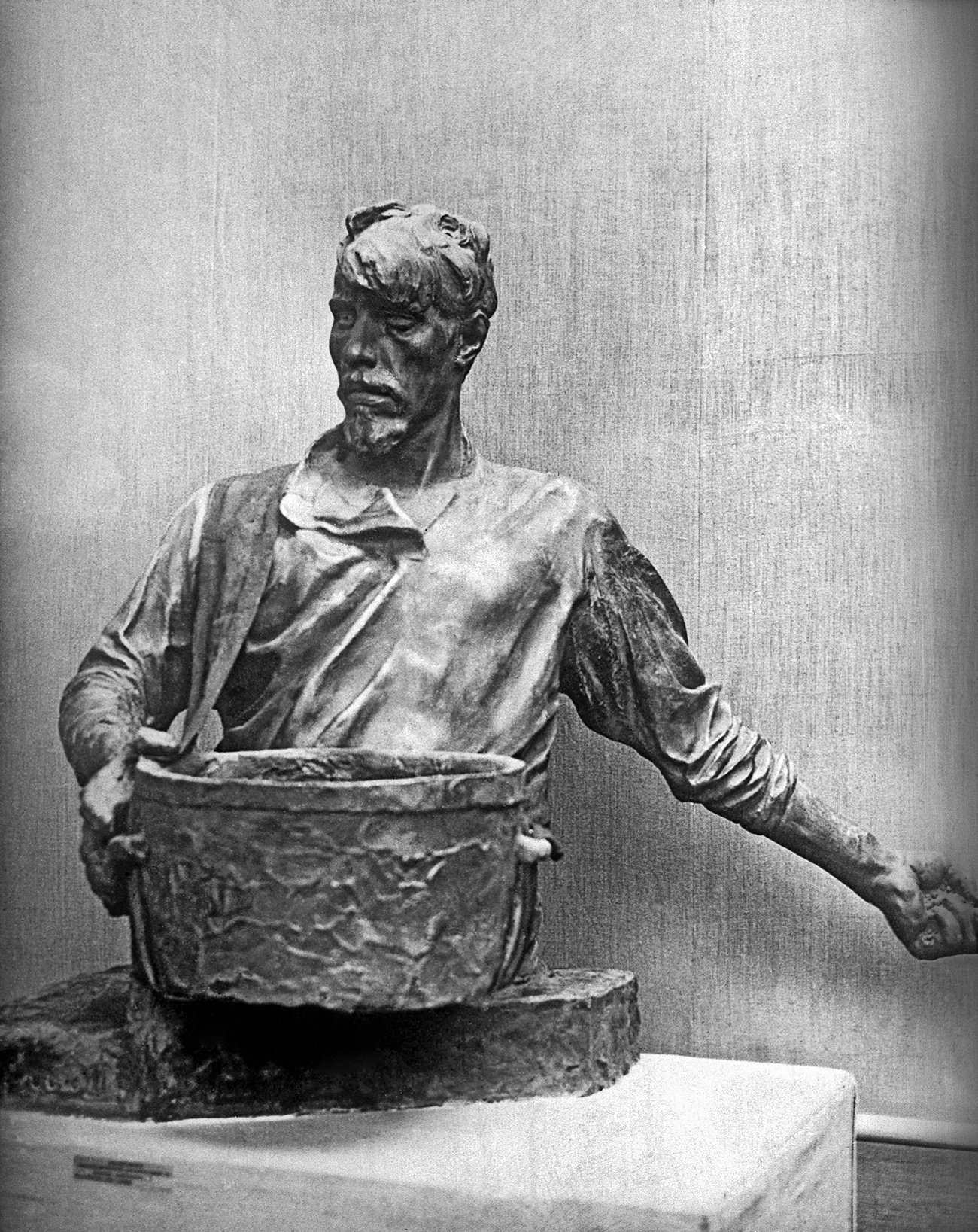 The young Soviet republic needed new money, especially banknotes depicting not specific prominent figures but symbols of the new ruling class: a worker; a peasant; and a Red Army soldier. Commissioned by Goznak in 1922, Shadr created a series of symbolic sculptures. The Peasant, and The Red Army Soldier were put on the Soviet 15,000-ruble and 25,000-ruble banknotes that were printed in 1923. That same year, The Sower was depicted on short-term state bread bonds, while The Worker graced a 5,000-ruble treasury note from 1925. 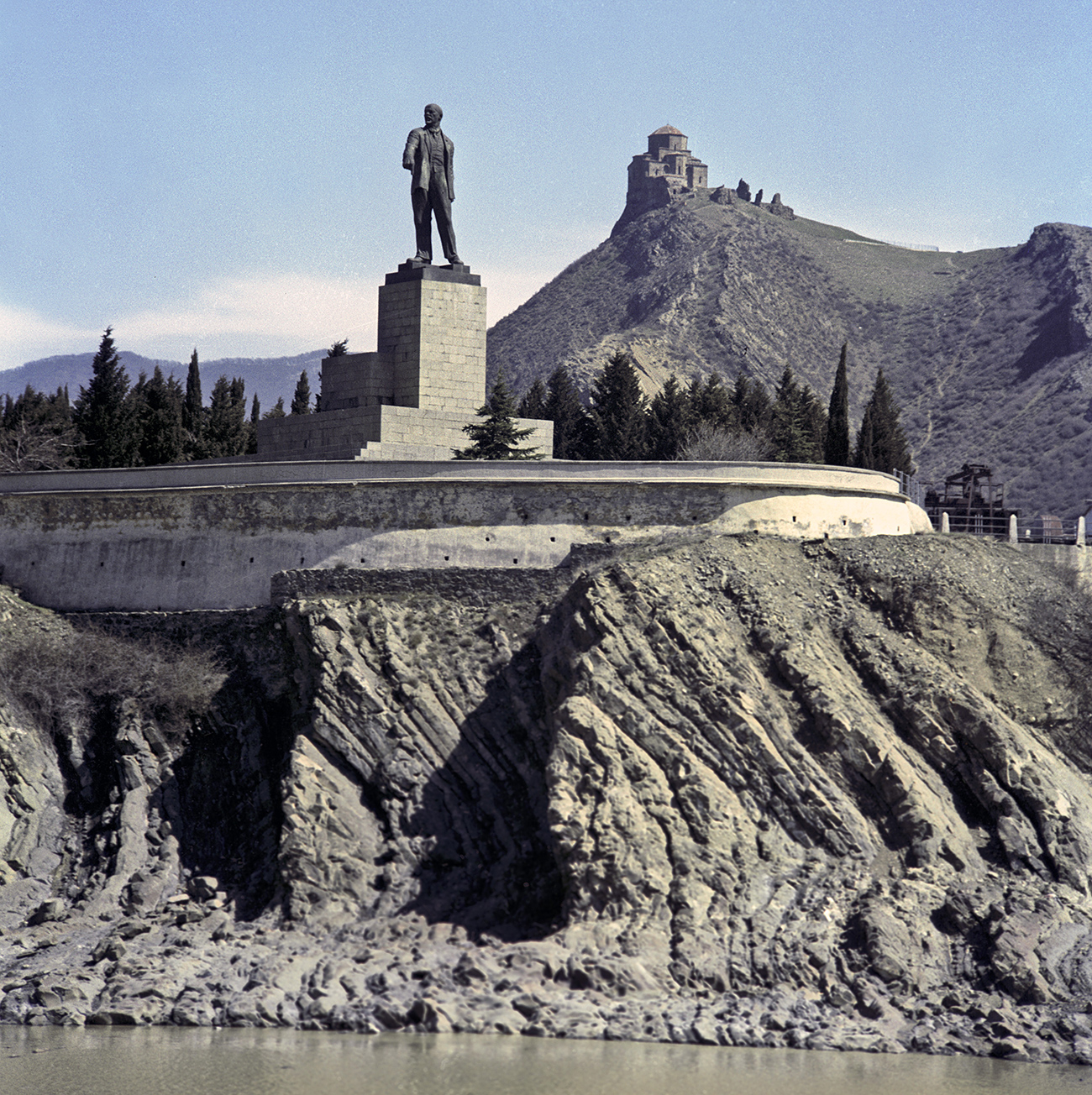 In January 1924, the sculptor spent more than 40 hours in the Hall of Columns of the House of Unions, where the body of the leader of the Russian Revolution, Vladimir Lenin, lay in state. Shadr was working on a full-scale sculpture, Lenin in his Coffin. He refused to accept a fee for the work, saying it was impossible at a time of such profound grief "to put a price on a work like that." He later presented the sculpture to the Lenin Institute.

In the early 1930s, Lenin statues created by Shadr began to appear in many Soviet republics and cities. Outside the Georgian capital of Tbilisi, the world’s largest Lenin monument stood 11-meters high, a bronze statue erected above the dam at the Zemo-Avchaly Hydroelectric Power Station.

In 1930, Shadr helped design the Order of Lenin, one of the most prestigious Soviet awards.

3. The Cobblestone Is the Weapon of the Proletariat 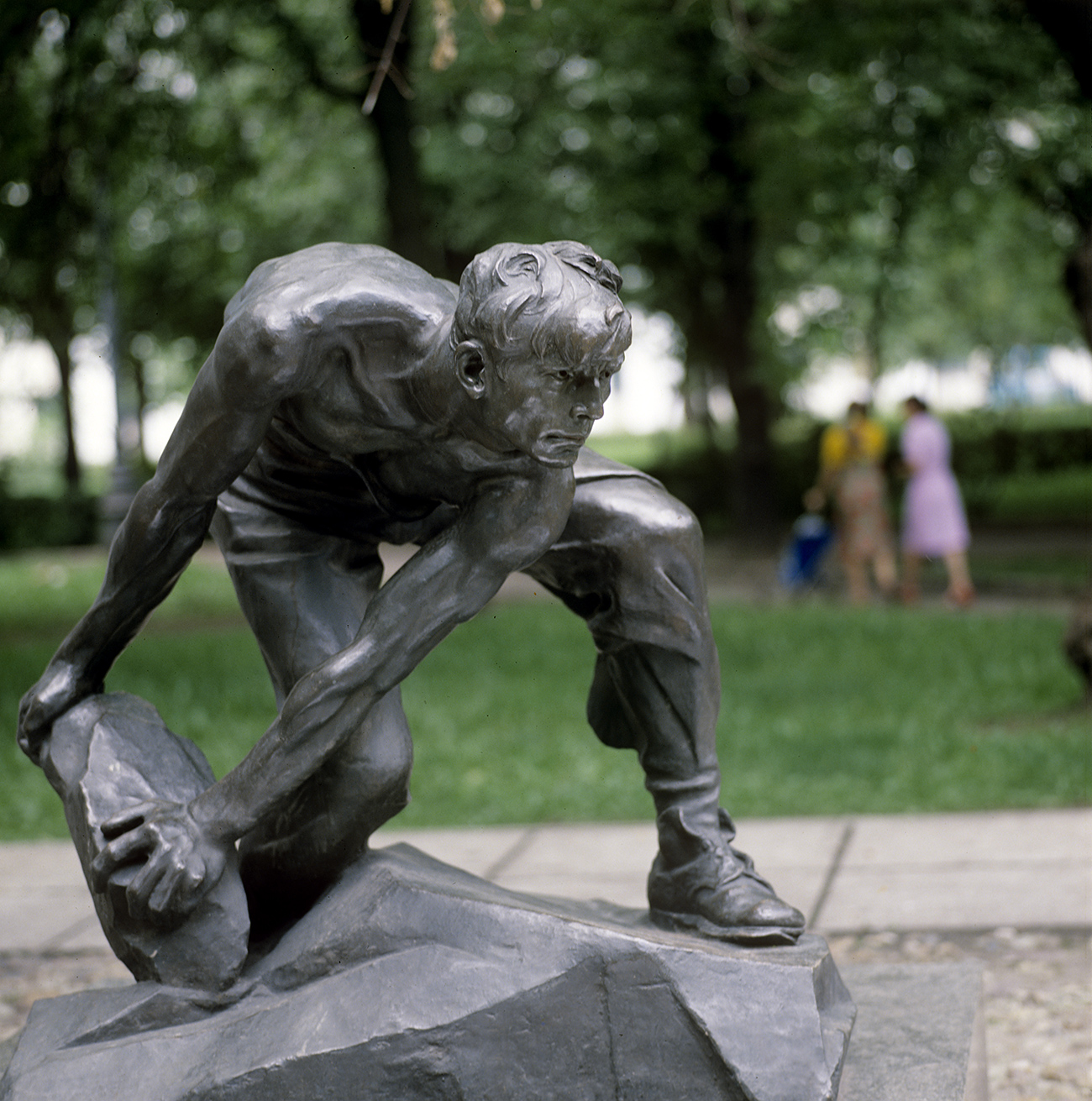 The dramatic composition, The Cobblestone is the Weapon of the Proletariat, was first presented at the All-Russia Exhibition devoted to the 10th anniversary of the Revolution in 1928. Shadr chose the events of the 1905 revolution as his main topic, which depicted a peaceful demonstration of workers in St. Petersburg on Jan. 22 that was fired on by soldiers, triggering mass protests against the monarchy. The sculpture captures an emotional moment when a worker picks up a cobblestone from the pavement to throw it at his class enemy.

Historians and critics greeted the sculpture with enthusiasm for its tension and masculinity, and in the Soviet Union it was often compared to Michelangelo’s David and Myron’s Discobolus. 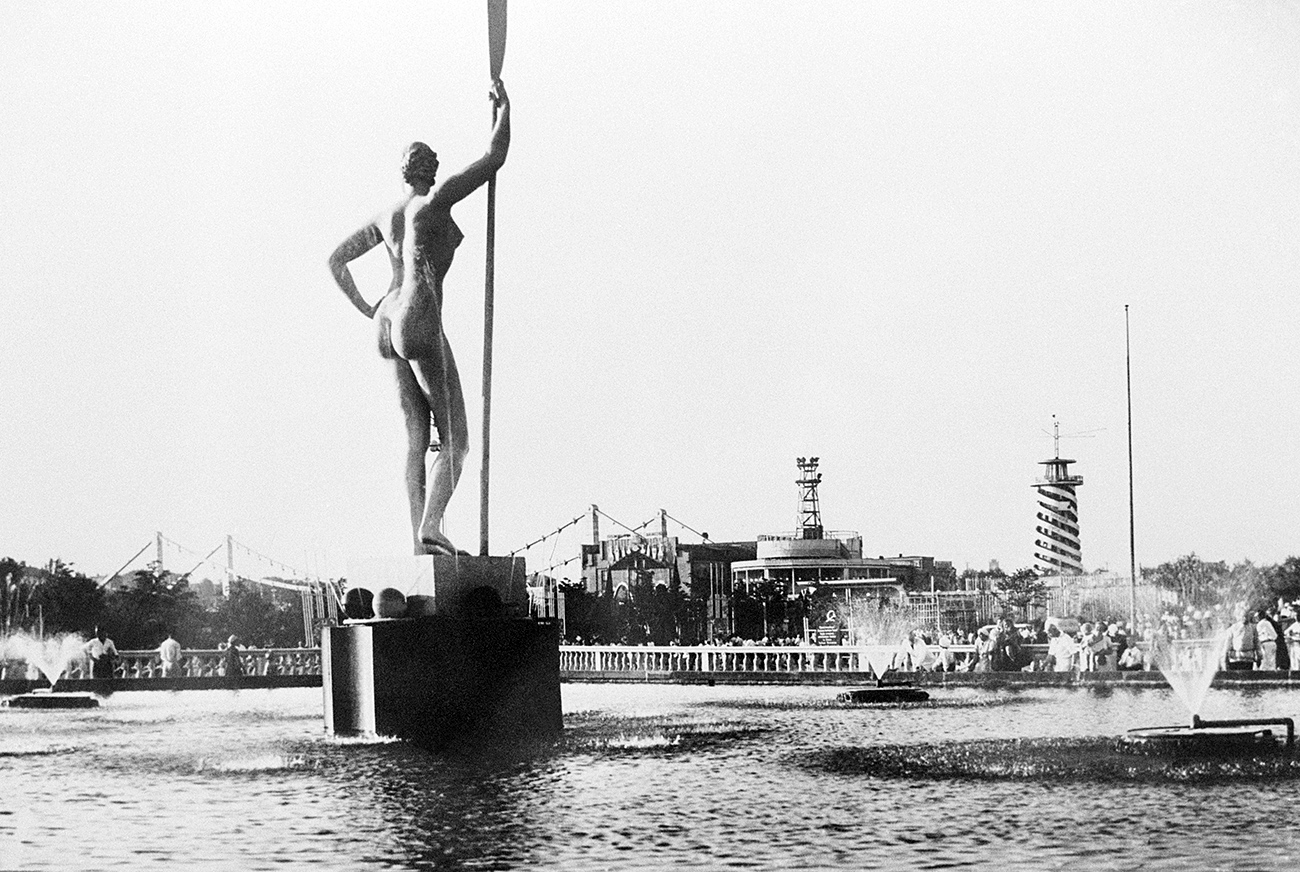 Shadr’s famous Girl with an Oar is one of the first examples of Soviet monumental and decorative sculpture, and it became the apotheosis of Soviet propaganda about the ideas of motherhood, labor, and health. In 1935, this 11-meter tall beautiful young female nude stood in the center of the fountain on the main alley in Moscow's Gorky Park. The work, however, was criticized as too naturalistic and too sexy, and was moved to a park in Ukraine’s Luhansk, where it was subsequently lost. The same figure, sporting a bathing suit, was later copied by many other sculptors to decorate parks and stadiums around the country; while its bronze prototype is now kept in the Tretyakov Gallery. 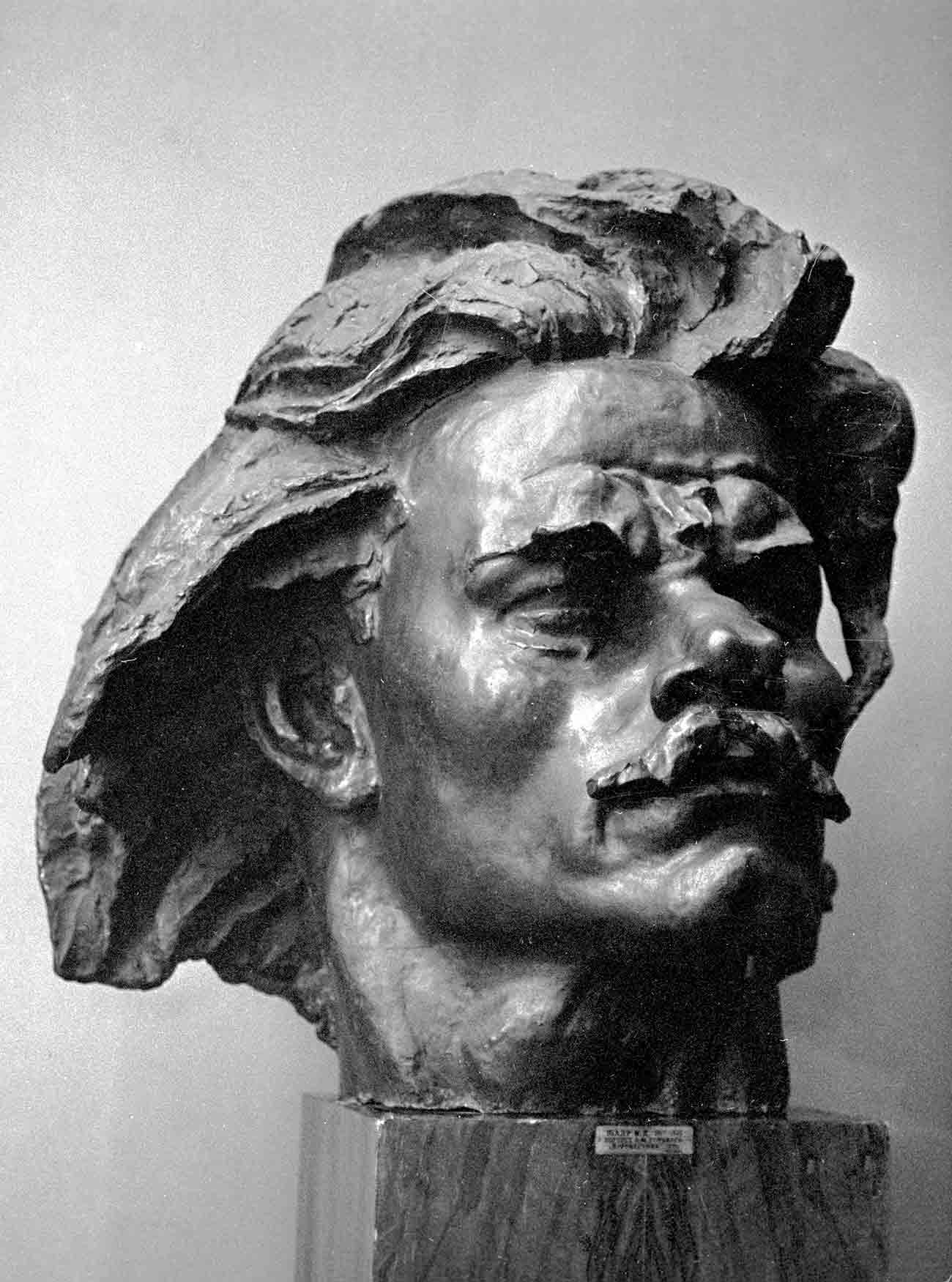 Shadr made his sculptural portrait of the famous writer by creating a romantic image of a Soviet rebel writer. He placed two strands of tousled hair above his forehead that resembles the silhouette of a soaring petrel. One of Gorky’s works is titled, TheSong of the Stormy Petrel. Shadr began working on the monument in 1939, but he died before he realized the clay model into bronze. After Shadr’s death in 1941, the monument was completed by another legendary sculptor, Vera Mukhina, the author of the famous Worker and Kolkhoz Woman statue at the VDNKh exhibition in Moscow. Until 2005, the bronze Gorky stood in the square outside the Belorussky railway station in Moscow, and has now been moved to the Muzeon Art Park.