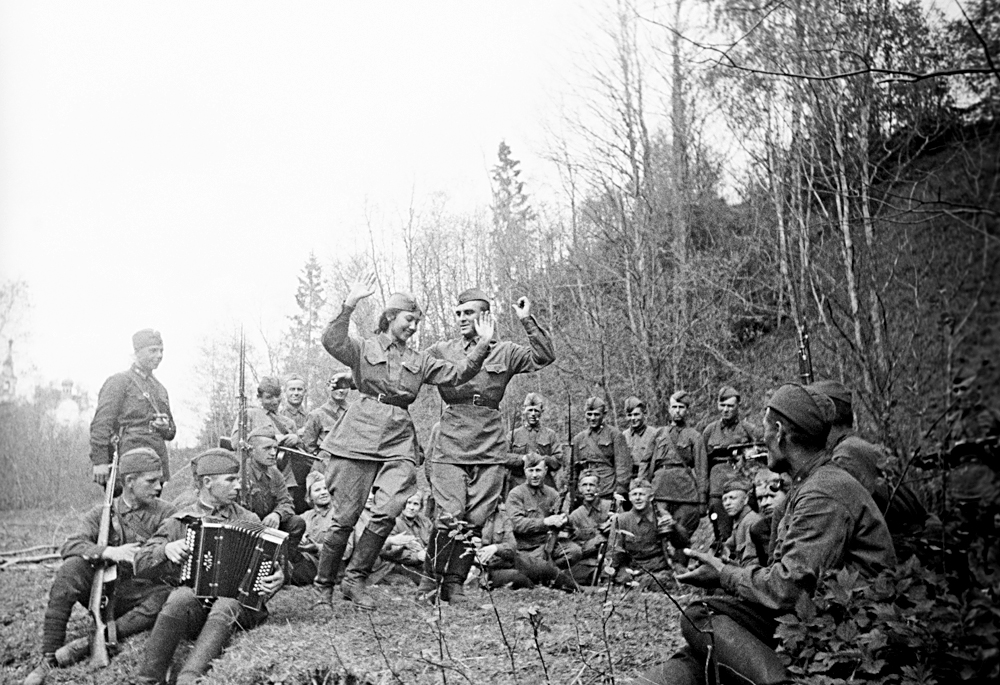 Lull in the fighting at the front line. The Great Patriotic War. The picture taken on May 15, 1944.

Viktor Kinelovsky/RIA Novosti
On the eve of Victory Day, RBTH remembers the most renowned songs from the war years – songs whose popularity helped to inspire the Soviet Union in its fight against Nazi Germany.

When poet and war correspondent from the Komsomolskaya Pravda newspaper Alexei Surkov was assigned to write about the 9th guards rifle division, he came under fire. Escaping, he and several other journalists and officers jumped into a dugout, where he wrote this poem.

A week later the song was ready and on March 25 the notes and the text were published in the Komsomolskaya Pravda newspaper. The lines "You are far away, but to deathit’s four steps" soon became very popular. In 1945, after the Battle of Berlin, Lidia Ruslanova, a well-known Soviet performer of folk songs, sang "In the Dugout" by the Reichstag and the Brandenburg Gate.

Leonid Lukov's film Two Soldiers was shot in evacuation in 1943. The scene in which protagonist Mark Bernes sings for his fellow soldiers in a dugout needed a song. First there was the melody and then, suddenly, by coincidence, the lyrics were improvised: "The dark night/only bullets whistle by in the steppe/ only the wind buzzes in the wires, the stars twinkle dimly/In the dark night, I know that you, my love, are sleeping/And are furtively wiping a tear by the cradle."

The following day the scene was filmed and the song became famous even before the movie was released, with renowned Soviet singer Leonid Utyosov learning of the song and recording his own version. But the recording actually did not change the fate of "Dark Night": Even though the song has been sung by many singers over the years, Mark Bernes' version remains everyone's favorite.

Prose writer and poet Konstantin Simonov wrote the lyrics "Wait for me and I'll return, but really wait" in the summer of 1941, after the war began, dedicating them to his beloved, actress Valentina Serova. He would read them to soldiers during his trips to the front and soon the penetrating lines, full of longing for his beloved, became famous.

"Wait for Me" was not supposed to be published but seeing how popular the poem had become, Simonov decided to publish it. However, several newspapers rejected it. "Wait for Me" eventually appeared in 1942 in the Pravda newspaper. In the dark days of the war the lyrical poem was a savior for many soldiers, as well as for those who were waiting for them at home.

In the film Lad from Our Town, which is based on Simonov's plays, the poem became a song. It is sung by the female protagonist in a hospital where she finds her husband among the wounded.

The story of this song began not long before the war. In 1940 the Polish Blue Jazz Orchestra was touring in Russia. During the concerts pianist and composer Jerzy Peterburgski was performing one of his new melodies. On hearing it, Poet Yakov Galitsky wrote a poem then showed it to Peterburgski, who wrote the music – and thus was born the famous "Blue Handkerchief" waltz.

Many female Russian singers would go on to perform the composition, but it received its real nationwide fame in 1942, when it was sung for the first time by legend of the Soviet musical stage Klavdiya Shulzhenko. During her tours at the front she performed it with altered lyrics that had a more military context. It was this version of "Handkerchief" that became the standard that was later sung at concerts and in recordings.

The first time this song was sung was in 1938. Lidia Ruslanova heard it during a rehearsal by a state jazz ensemble and then sang it during her concert at the Column Hall in the Union House in Moscow. During the war the song had many versions and “Katyusha” was perceived as a real girl, not a collective image. The song is still popular, and not only in Russia but also abroad.