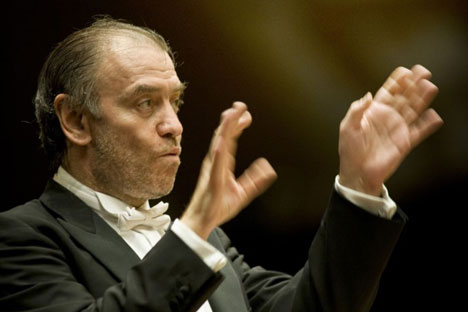 Valery Gergiev and Munich Philharmonic Orchestra to play in Germany and U.S.

Russian conductor Valery Gergiev and the Munich Philharmonic Orchestra are set to tour both Germany and the U.S. The orchestra, directed by maestro Gergiev, will play four concerts from March 22 to 29 in Munich. The U.S. leg of the trip will begin April 2 in New Jersey’s Newark (the symphonic poem of Strauss "Don Giovanni", Ravel’s Piano Concerto in D major Ravel, and the Third Symphony of Beethoven) before reaching New York’s Carnegie Hall – the orchestra will play two concerts in the Big Apple. This was reported by the Mariinsky Theater, according to RIA Novosti.

During the concerts on March 22 and 23, which will take place on the stage of the Gasteig cultural center – home to the Munich Philharmonic Orchestra – the Bavarian collective will perform the prelude to Debussy's "Afternoon of the Faun", as well as the Fourth Symphonies of Schubert and Mahler. The Fourth Symphony of Schubert will also be performed during the next concert, with the choreographic poem "Waltz" and Ravel’s Piano Concerto in G major.

During the final performance in Munich on March 29, the Strauss symphonic poem "Don Giovanni" will be presented, as well as the Third Symphony of Beethoven. The solo at the piano concerts will be performed by the French pianist and Grammy winner Pierre-Laurent Emar.

The orchestra will perform in one of the world’s most prestigious concert halls during on April 3 and 5: New York’s Carnegie Hall. On the first night, the musicians will present Beethoven's Third Symphony, Waltz, and Ravel’s Piano Concerto in G Major. Pierre-Laurent Emar will again be the soloist. As part of the final concert tour, a prelude to the "Afternoon of the Faun" from Debussy and the Fourth Symphony of Schubert and Mahler will be performed.