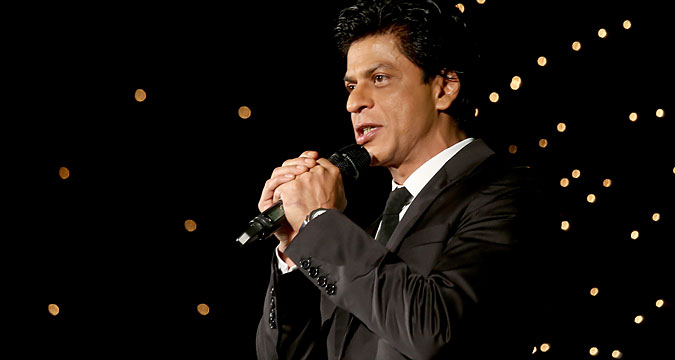 EPA
In an exclusive interview with TASS, Shah Rukh Khan, the 'King of Bollywood', discusses the forthcoming release of Rohit Shetty's film ‘Dilwale’ (large-hearted) in Russia and admits he prefers to play 'bad guys' on screen.

The Russian premiere of your new film Dilwale is due to take place in February. Will you be able to come?

I really want to go to Russia. It's one of the few countries I've never been to. And it's a very beautiful country too. I'd also like to shoot one of my films there.

Indian cinema has historically been very popular in Russia, and people still enjoy it today. As for the Russian premiere, I'd be happy to attend, if my busy schedule allows. We've already held premieres in Britain and the USA, and now it is definitely Russia's turn.

Do you think your new film will interest Russians and foreigners in general?

I think most people like the love stories that lie at the heart of our films, as well as the emotional side of the movies. I have spent a lot of time with Russians, Germans and Britons. They have all said that the emotions in Indian cinema are very strong. In Dilwale, we have two love stories at once. Also, Rohit Shetty's films are always very bright and colourful. So I'm almost sure that foreigners will like the emotional side of the film, the love stories, and, of course, the songs and dances.

You were good at sport at school. Have you ever thought about what you might have done if you hadn't become an actor?

A sportsman. I'm sure that I could have done well for my state at cricket or hockey.

At the start of your career, you often played anti-heroes, something that cannot be said of your recent roles. Which do you personally find it more interesting?

I like dark roles – I call them 'grey' – much more, but I've been fated to play romantic parts. It is no secret to anyone that I'm offered the roles of positive characters much more frequently. If I could choose, then I'd probably prefer anti-heroes. Like in my next film ‘Raees’. My character in my new film, ’Fan,’ is also ambiguous.

To play a bad guy, you need to work hard, to bring out that side of you from somewhere deep inside of you and then personify it on screen.

Dilwale is your 12th film with Kajol, I think. Are you planning any more work together?

You know, everyone says we need to do a mature love story. We've been filming together for 22 years now, but we haven't done that many such films. It might sound presumptuous, but I'd like to do something serious. I think that at this stage and that our age we could sum up everything we've done and try to take it to a completely different emotional level.

Many people who saw your films ‘My Name Is Khan’ and ‘Dilwale Dulhania Le Jayenge’ with Kajol have probably asked themselves this next question. How do you manage to keep up from one film to the next the romantic fairy tale that you give audiences?

Firstly, a fairy tale means magic. And magic is something that you can't explain. Secondly, a lot of it is down to the people who make the films with us, and, of course, the audiences. We've become like family for them. We're normal people, and that's how we act in our films, whether we are both in them or not. We've never seen ourselves as a pair of stars. Audiences see themselves in us.

You're not only a successful actor, but a businessman too, in the sense that you do your own marketing and spend a lot of time on it.

You know, when you become a celebrity everyone starts giving you the credit for everything. Unfortunately, people often say that a film's success is thanks to Shah Rukh Khan, and not to the 200 people involved in it. I'm the guy in the film poster. That's my role. Everything else is down to my team of highly educated, clever, special people who come up with the ideas. Of course, I also have a certain status in society – I won't deny that – but when it comes to marketing the ideas aren't mine. Call me a marketing genius, a businessman, whatever you want – it's all a complement to the people I work with.

What events in the past year have stuck in your memory?

Quite a few events made an impression on me. Sometimes in a bad way, like, for instance, the floods in Chennai and the terrorist acts in Paris.

On a personal level, my son has said his first words and started talking. Apart from that, I've turned 50. I've reached a stage in life where I’m getting invited to meet young people all over the world. It's interesting, because I have something to share with them. I've learned a lot in life, mainly, of course, thanks to my work.