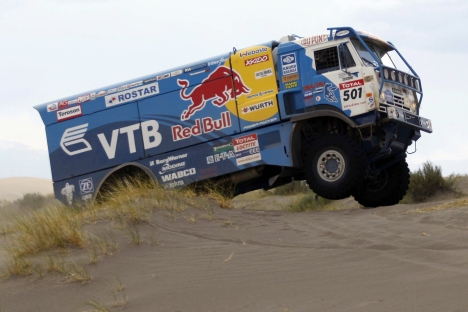 Airat Mardeyev, captain of the Russian KAMAZ-Master team, talks about the difficulties of the Dakar 2013 Rally.

For most of January, a caravan of hundreds of automobiles, motorcycles and trucks will be forcing its way through the sands of South America – from the Peruvian capital of Lima, to Santiago de Chile. All together this is known as Dakar 2013.

As always, at the center of the world’s most prestigious rally-race is a Russian KAMAZ-Master team. The Russian daily Moskovskie Novosti asked driver Airat Mardeyev about the route, the fines for speeding, and the main nightmare of the race – overzealous spectators.

Airat Mardeyev: As always, it has been very interesting, with lots of special sandy areas. To be honest, I’ve always liked sands and high dunes. And our experience in the last few years shows that we don’t do badly in sands, competing as equals with our rivals. And then it’s a very interesting route. We began in Peru, then Argentina and Chile. Last time, we drove in the opposite direction.

MN: Which area will be key?

A.M.: Any area can turn out to be key. Faimbola, for instance, isn’t easy. A few years ago we got caught in a really tough sand-funnel there. The distance was only about 200 kilometers [125 miles], and we had to cover it in a maximum of 12 hours. But we had to spend two hours just digging our truck out. That alone tells you how difficult that area was.

MN: Do you know anything about the cities on your route? Do you manage to see at least a little bit while passing through?

A.M.: Almost nothing. You’re focused solely on the race and there’s no time for distractions. We did see a little bit of Lima last year, after the finish. But, for me, the names on the map are often just points marking the beginnings and ends of stages.

MN: In how much detail do you plan for each area?

A.M.: Once the map of the rally route appears, we begin to understand what to expect. Then, at the start of the race, the organizers give everyone a special booklet describing every area in detail, right down to the composition of the soil – how many kilometers of sand, how many of stones, and so forth.

MN: What’s new about your truck as compared to last year?

A.M.: We worked mainly on dependability. Last year our engines gave out and we couldn’t finish the race. So, we spent a lot of time experimenting with the engine mounting and looking for interesting adjustments. We also worked on the brakes – we’d had problems with overheating.

MN: Your father has competed many times in the Dakar Rally, and now he’s on your team. There must be some family tradition.

A.M.: Oh, there are lots of them. My father is always telling stories about past races, but they almost always boil down to one thing: young racers today have it easier. “You,” he says, “have a fantastic group of mechanics, the best technicians around today, and a hotel on wheels. In the old days, racers slept in tents on stones wherever they happened to wind up.” Now a masseur travels with us, and even a chef.

MN: This may be a silly question, but do you have a tape deck in your truck?

A.M.: I don’t, but there are guys who install one for interim stages, when, say, we’re driving to Le Havre for technical checks. But I personally try not to install one – it’s extra work and extra wires.

MN: Okay, then what does one hear in the cab of your truck during the actual race?

A.M.: Everything is very business-like. To begin with, the navigator is constantly calling out the route, from the very start to the very finish. Plus, we’re talking to the mechanic who’s responsible for the pressure in the tires, for all the instruments, and is constantly telling us where the temperature has gone up, etc. And then you can hear the truck itself, constantly – if it doesn’t like something, it will always tell you.

MN: Is there foul language? Say when you fly into some pit, there must be a lot of emotion…

A.M.: There was in the beginning, when I saw my first real sands during training sessions in Tunisia. Then there was a lot of emotion. But now we’re used to these things, I guess… I won’t say that there isn’t a sense of danger, risk and even fear. But the emotions are buried deep inside, and there’s more analysis.

You realize that you can’t race through sands at breakneck speeds: you have to just drive through them, put up with them. If you manage to get through an area like that without once having to go backward, without once getting stuck, that means that, in any case, you’ll show a good result and be ahead of many, if not all. Meanwhile, your rival will be left hanging from a nearby dune.

MN: During the race, do the spectators get in your way?

A.M.: When Dakar had just switched to South America, it was absolutely crazy – especially in Argentina. If it’s not a special area, then you’re driving through a narrow corridor with literally only millimeters separating vehicles from people – people who get out of the way only at the last minute. It’s a real nightmare. Many of those people run in front of your truck and manage to take pictures of themselves on their phones.

It gets on your nerves, but there’s an iron-clad law: better to sacrifice speed than to have an accident and never be able to forgive yourself, especially since there have already been tragedies. An off-road vehicle hit a boy…

The organizers have imposed increasingly strict rules for spectators. In cities, police are stationed every 10 meters [33 feet] with metal barriers between them.

MN: What is your truck’s maximum speed?

A.M.: One-hundred and forty kilometers an hour [87 miles per hour]. That’s the maximum speed allowed in special areas of Dakar. But on asphalt we have to obey the speed limits of whichever country we’re in. In Peru, it’s 80 kilometers an hour; in Argentina, it’s 90. For every speed violation there’s a time penalty and a fine.

A.M.: One-hundred euros [$133]. But if you break the speed limit often, you’re disqualified from the race. Our black boxes record everything, and very strict tabs are kept.

MN: They say that, in your truck, there’s at least one part that you won’t find in any other vehicle in the world.

A.M: That’s true – it’s the steering wheel. It’s inscribed with the wishes of my wife, and this steering wheel goes with me from truck to truck. Before every start I kiss my steering wheel, and, God willing, that will help this time around with what is most important: returning home alive and well from Dakar.

The interview is first published in Russian in Moskovskiye Novosti.