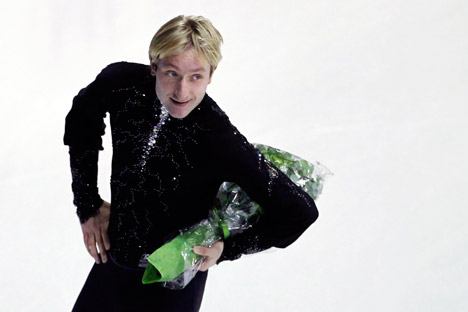 Evgeny Plushenko called his fall on a triple-axel attempt in the short program an “inexcusable mistake.” Source: Reuters

The 2013 European Figure Skating Championships in Zagreb, Croatia were a success for the Russian team, which had to deal with drama on and off the ice.

The European Figure Skating Championships in Zagreb were a truly unforgettable experience for both the athletes and the fans — flawless skating from Europe’s strongest performers, fierce battles and breathtakingly close results.

The championships produced a number of sensations, but, as expected, team Russia won the overall standings with two gold medals, two silvers and one bronze. In addition to being crowned the best team in Europe, the Russian skaters also deserve a separate award for their resilience and fighting spirit.

Plushenko falls, but gets up again

Olympic champion, two-time Olympic silver medalist, three-time world champion and seven-time European champion Evgeny Plushenko called his fall on a triple-axel attempt (an elementary jump for a skater of his caliber) in the short program an “inexcusable mistake.”

His coach, Alexei Mishin, was quite lighthearted about it to begin with: “Well, you know, even Yelena Isinbayeva sometimes fails to clear the opening height.” He sounded quite bitter in another comment, though: “It’s hard to compete with opponents and pain.” It was announced that the prominent skater would have to withdraw from the tournament, for only the second time in his career; the letters “WD” had only ever stood opposite the name Plushenko during the 2004-2005 World Championships.

Plushenko will have to undergo treatment now (most likely in Germany), but he is optimistic: “I’m trying to take it easy. I will take care of my back and resume practicing on 1 March,” the skater tweeted.

Will Plushenko recover for the next world championships, scheduled to take place in Canada on March 13-17? Alexei Mishin had no direct answer. “You saw him practice during the first few days, and he looked fine. He needs treatment for his back. In March, we’ll work on a new program,” Mishin said.

Plushenko has returned to professional sports one more time for his fourth Olympic Games — he still wants to win on the ice in Sochi.

Ice on the heart

The audience gave only one standing ovation, which was to show appreciation for Javier Fernández’s free program. Fernández was a hands-down favorite even before the rest of the competitors completed their programs. His Charlie Chaplin medley in the free program was not only artistic, but it also featured three quadruple jumps in a single routine.

Maxim Trankov gave the world another demonstration of courage, competing in the championships shortly after the death of his father, who suffered a heart attack the day before the skater left for Zagreb. Trankov’s father had been his biggest supporter, and he attended his son’s final practice before the championships. Despite the tragedy, Maxim decided to perform. He and his partner, Tatiana Volosozhar, managed to beat their main rivals, four-time world and European champions Aliona Savchenko and Robin Szolkowy, for the first time ever.

The Russian pair had lost out to the German pair at two previous world championships, as well as at the 2011-2012 Grand Prix Final, where they were came up short by just 0.18 points. In Zagreb, Tatiana and Maxim beat the German pair by more than 7 points, but they were in no mood to celebrate.

“It was very hard for us to perform,” coach Nina Mozer said. “We were physically and emotionally drained. This has been the toughest championship for us throughout the whole time that Tatiana and Maxim have been skating together. We didn’t really have any plan… We just wanted to get through it and complete the performance… It is a very tough gold all round. We’re not celebrating; the guys flew straight to Moscow for the funeral, and that’s all that mattered.”

Dancing without the stars

It was incredibly hot on the Zagreb ice, even though two-time European dancing champions and world championship bronze medalists Nathalie Pechalat and Fabian Bourzat of France could not make it to Croatia.

Italian Carolina Kostner won her fifth gold in Zagreb. She is now just two gold medals short of Irina Slutskaya’s singles record. It will be a tough challenge, though: Carolina was second after the short program, and only the free program put her in the lead, just ahead of 16-year-old Russian pair Adelina Sotnikova and Elizaveta Tuktamysheva.

“You work to build your name, and then the name works for you,” said Sotnikova’s coach Yelena Buyanova (Vodorezova), who was formerly a well-known skater herself.

Russian pair Elena Ilinykh and Nikita Katsalapov won the free-dance program, scoring more than 100 points for the first time in their career. However, it was Russian pair Ekaterina Bobrova and Dmitri Soloviev who snatched the gold by the most slender of margins — just 0.11 points.

“In terms of expressiveness, this was not our best performance in the free program. We were better during practice: people were coming up to us and saying that we gave them goose bumps. That’s what we need to do,” Soloviev said.

Experts agree that the Russian pairs have improved, but some wonder whether they will have the motivation, technique and artistry to win a world championship medal. The pair will go to London, Ontario to compete against the higher-ranking French pair, as well as superior Canadians and Americans who currently set the standards in modern ice-dancing.