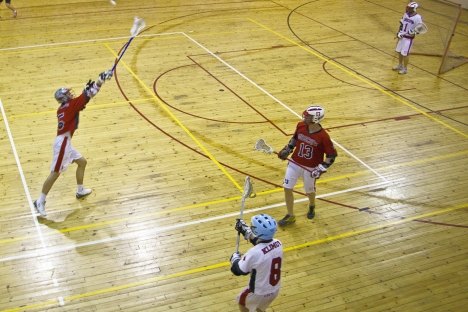 The tough and dynamic Native American sport is gaining more and more fans in Russia, which now hosts lacrosse teams in Moscow and St. Petersburg.

Russia was admitted to the Federation of International Lacrosse last year and plans to take part in the 2014 World Lacrosse Championship in Denver.

“What kind of sport is that? What? Lacrosse?” asks a sporty-looking lad in one of Moscow’s sports centers. On their way from the changing room to the gym, he and a few of his friends stop outside a sports hall where two teams of 10 players are trying to hit a small rubber ball into the other side’s goal, passing it skillfully with sticks that look like a hockey stick with a net on the end.

Lacrosse meets Russia from Russia Beyond The Headlines on Vimeo.

“No, did you see how he passed it to him? Did you see?” says the young man enthusiastically — and then, with slightly less enthusiasm, goes off with his mates to work out on the machines.

The original version of lacrosse was a game invented by Native Americans in North America, who regarded it as an excellent way to train strong, brave warriors. Accounts written by the first Europeans to colonize America say that several hundred people — sometimes even a thousand —would take part in the games.

The field could range from hundreds of feet to several miles, and the game could last for several days. The player’s aim is to use his stick to hit a small rubber ball into the opposing side’s goal. There are now more than 30 national lacrosse associations in the world (in Europe, New Zealand, Japan and South Korea, for example), but the leading countries are still the United States and Canada.

Lacrosse, which was invented by Native Americans in North America and adapted to modern conditions by Europeans, is still not very well-known in Russia. Still, it is attracting more and more fans every year. Its history in the Russian Federation began in 2007, when David Diamonon arrived in Moscow.

“I first encountered this sport when I was studying at a school in Houston,” Diamonon once said in an interview with RF-Sport. “At that time, the game was on the rise in Texas. After school, I gave up lacrosse, and it was only seven years later that I remembered my favorite game. I went back to lacrosse and started coaching a team in Houston. When I was sent to Russia with my work, I took the opportunity to put a team together in Moscow.”

Thanks to Diamonon, there are now two lacrosse teams in Russia: the Moscow Rebels and the St. Petersburg White Knights. They play each other twice a year, and the winner is champion of Russia.

The backbone of each team is Americans living and working in Russia — but according to Diamonon, the situation is changing.

“We have a growing number of pure Russian players. That really is the point. If this is going to live on, it has to be people who live here. This has got to be Russians,” he told RBTH.

Diamonon says about 40–50 people play lacrosse in Moscow — and only 20 of these, at most, play regularly. Apart from Americans and Russians, the team has two Japanese players.

The players are mainly between the ages of 19 and 25; although the age range is actually much wider, with the youngest player being 13 and the oldest 45, says Anna Mikheyeva. Anna is a devoted fan who also happens to be the girlfriend of one of the players. She says Russians mainly get into lacrosse through personal contacts: if someone plays, they try to persuade their friends to give it a try.

There are also some more unusual reasons. “My boyfriend, for example, saw people playing lacrosse in ‘American Pie,’ the film. He really liked it and decided he was going to play lacrosse,” says Anna.

Aleksei Chernyshev took up lacrosse eight months ago, in June 2012. “I play in goal. I like the fact that lacrosse is more aggressive than the sports we traditionally play in Russia. It’s like something halfway between hockey and American football. We don’t have anything like that,” he says.

New Moscow Rebels head coach Yevgeny Arkhipov has a similar view. He replaced Diamonon in January, since the American moved to Ukraine to work. Having spent most of his life in the United States, Arkhipov has been involved in lacrosse for 14 years.

“I saw elements of other sports that I liked in lacrosse. For example, the field is like the one we use in football, the moves are like basketball, the stick is like a hockey stick, and the fact that you can run into each other is like American football. I didn’t like basketball, because you had to play so accurately, whereas in this game you just have to hit it!” says Arkhipov, who teaches in a language school in Russia.

In 2011, Russia was admitted to the Federation of International Lacrosse. Now there are plans to take part in the World Lacrosse Championship, to be held in Denver in 2014.

“Those plans are going full speed ahead,” Diamonon told RBTH. “In 2014, in July, we will go to Denver and we will compete to represent Russia for the first time in the world championship.”

Despite the development of lacrosse in Russia and its growing popularity, there is still a lot for fans of this game to accomplish before it becomes an officially recognized sport in the country. For example, there is currently no official organization in the Russian Federation promoting and developing lacrosse.

“At the moment, we’re not a sport [in Russia], because we don’t have an official federation. We need to do that. People have tried, but nothing’s happened. It makes it more difficult to find sponsors, because they view us as amateurs,” says Arkhipov.

“There are many challenges. One is just finding a place that you don’t have to pay for to play on,” says Diamonon. “Second of all, none of the equipment is sold here in Russia. Thankfully, I was traveling back and forth between Russia and the U.S. enough to literally bring things in my luggage. Over time, and little by little, I brought more and more equipment until we had enough.”

Nevertheless, both men sound confident that lacrosse will continue to develop in Russia, in spite of everything — if nothing else, because this sport can help strengthen relationships between people from different countries.

“What it comes down to is that all of you are working towards the same goal. Regardless of where you were born, what political ideology you have, when you are on this field you have one thing that you are trying to accomplish, and that is to win the game. To do that, you have to work together,” says Diamonon.