Bandy: A concise history of the extreme sport 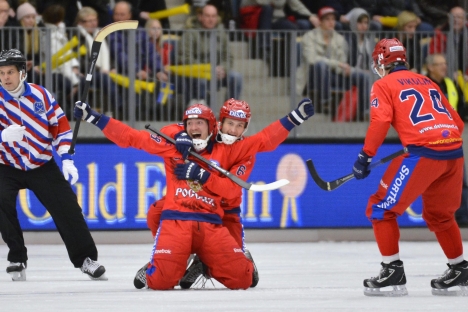 Bandy will be showcased at the Sochi 2014 Winter Olympics. Source: AFP / East News

RBTH takes a look at the history of the bandy extreme game, which will be showcased at the Sochi 2014 Winter Olympics.

Almost all Bandy World Championships in the top division follow approximately the same pattern. The routine of the preliminary stage is followed by the semi-finals, and the decisive match usually features Russia and Sweden. Only extremely rarely does Finland intrude on the contest between this sport’s two leading countries. The elite group also includes Kazakhstan, Norway and Belarus. The leaders of the second division are the U.S. and Canada.

Several years ago, mainly thanks to the efforts of Russian sports officials, bandy became an IOC-recognized sport and a candidate for inclusion in the Winter Olympics program. Nevertheless, despite the fact that bandy will be a demonstration sport at the 2014 Sochi Games, the chances of it being fully recognized as an Olympic sport are very slim.

In its drive to meet the IOC’s requirements that a sport be played in many countries, the Federation of International Bandy (FIB) includes countries that have only declared their interest in the development of this game.

India, Afghanistan, Australia, Armenia, Argentina, for example, do not have any big ice-rinks on which bandy could even be played, nor do they have bandy teams that actually exist. Nevertheless, these states are full-fledged members of the FIB.

A game of bandy is played in two halves of 45 minutes each, on ice rinks whose dimensions are identical to those of a soccer field. Each team has a goalkeeper and 10 outfield players; substitutions are allowed. The aim of game is to get the ball (6.6 centimeters in diameter and weighing approximately 2 ounces) into the other team’s goal (11.5 feet wide and 7 feet high) as many times as possible, using hooked sticks.

The goalkeeper plays without a stick, catching the ball with his gloves and kicking it away, with his legs protected by pads. A 40-foot penalty shot is awarded for fouls committed in the penalty area: this is similar to the 36-foot penalty kick in soccer.

The balls used to be orange in color, but then they were changed to pink in order to meet the needs of television. Bandy is really not a television game. It is difficult to make out the little ball on the screen; when there are fast passes, not all spectators or viewers can see it, whether they are at the rink or watching on a television screen.

Bandy games are very often played in extreme conditions and severe cold — especially in Russia. At the 1999 World Championship in Arkhangelsk, the temperature was around minus 37 degrees Fahrenheit, and some games had to be played in three periods of 30 minutes each,

In Russia, bandy is considered a national sport and is known as “Russian ice hockey,” although it started in Britain at the end of the 19th century. It arrived in Russia in 1898, and the first Soviet Championship took place in 1928.

The first official international tournament was the European Championship in 1913, in which teams from Austria, England, Belgium, Germany, Italy, Holland, France and Switzerland played; the English team won. World War I then put the brakes on the international development of bandy.

The World Championships started in 1957. The Soviet and Russian teams have taken “gold” 21 times; Sweden has 11 titles and Finland won for the first and only time in 2004. For a long time only four teams took part in the championship: Russia, Sweden, Finland and Norway; they were joined by the United States in the mid-1980s. After the collapse of the Soviet Union, Kazakhstan became one of the leading teams, fielding mainly Russian players.

Bandy was very popular in the Soviet Union. Between 20,000 and 50,000 spectators would go to championship matches. Going to games also involved drinking copious amounts of strong alcoholic drinks — otherwise it would be hard to hold out for long on the ice. Consumption of alcohol is now banned at sporting events in Russia, and, consequently, there has been a significant drop in attendance at matches.

Only one team in Russia plays on a covered rink. Dynamo Moscow plays at the Krylatskoye sports complex; even still, only a few hundred spectators come to the matches. Many people in Russia believe that indoor bandy is just not the same as the open-air game.