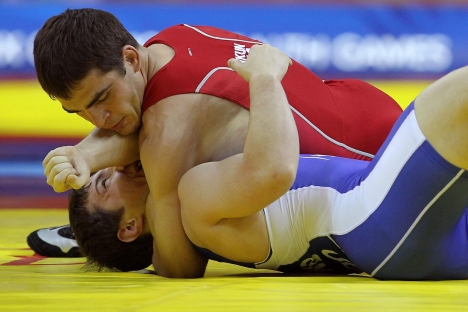 The International Olympic Committee may remove wrestling from the 2020 Olympic program. Source: ITAR-TASS

A sport with 18 gold medals at stake is at risk of being removed from the Olympic program. Meanwhile, Russian authorities hope that wrestling will remain on the program of the summer Olympic Games.

The International Olympic Committee (IOC)’s Executive Board has made the recommendation to drop wrestling from the 2020 Olympic program. Russia may lose a sport that has been a mainstay of its athletic pride since the Soviet era. The decision is not final and requires further approval, thus the Russian Olympic Committee president intends to contest the board’s decision.

At a meeting on Monday, Feb. 11, in Lausanne, Switzerland, the IOC’s Executive Board discussed the program for the 2020 Olympics, which are to be held in Madrid, Tokyo or Istanbul. Prior to the meeting, it was already known that the IOC Board would have to drop one sport from the program’s current list of 26 core sports.

Fifteen board members relied on a report from a special commission that had analyzed each sport and used more than 30 criteria, such as TV ratings, ticket sales, anti-doping policy effectiveness, and global popularity and spread.

Sources had pointed to several candidates for expulsion, including taekwondo, badminton, table tennis and field hockey. Eventually, however, it was wrestling that fell on the chopping block from the list of core sports.

The IOC has refused to disclose the reason why the Executive Board feels the sport should lose its status, and it did not release the specific voting results of the 15 Executive Board members.

The IOC’s Executive Board recommendation that wrestling be dropped from the 2020 Olympic program has caused an uproar around the world. Russia’s reaction to the news from Lausanne was particularly cutting. President of the Russian Wrestling Federation, Mikhail Mamiashvili, said that he was “shocked” by the decision, while the Federation’s vice president, Dzambolat Tedeev, called the board’s decision “absurd.”

“This is indeed a huge shock. Wrestling has been a core sport since the inception of the Olympic Games. It enjoys an extensive geographical spread, and I don’t think it was the least popular in terms of TV ratings or spectator interest,” said the Russian Minister of Sports, Vitaly Mutko.

Alexander Zhukov, president of the Russian Olympic Committee, admitted that the news came as a complete surprise to him.

“This is an astonishing decision,” Zhukov said. “Until yesterday, it was difficult — even impossible — to imagine the Olympic Games without wrestling. For Russia, this is especially bad news, because hundreds of thousands of our kids practice the sport and dream of becoming Olympic champions one day. Clearly, it would be a huge injustice to deprive them of that dream. We will do our best to convince IOC members to keep wrestling in the Olympic program. I want to write an official letter to the IOC.”

Wrestling was a part of the ancient Olympics and has been present in the program since the first modern Olympics of 1896. It has been one of the main sources of Russian sporting pride since Soviet times. Wrestlers could always be counted on to win medals for the Russian team; they have won a total of 51 medals (including 25 gold medals) at six Olympics. Many Russian wrestlers are among the all-time best.

In accordance with its regulations, at a May meeting in St. Petersburg, the IOC’s Executive Board will decide which of seven candidate sports — including baseball and softball, karate, roller sports, sport climbing, squash, wakeboarding and wushu — will be put forward for the 26th spot at the Olympics.

However, the board’s decision to drop wrestling is not yet final. It will have to be approved at an IOC session in Buenos Aires in September.

Yet Zhukov still hopes that wrestling will remain on the program of the summer Olympic Games in 2020.

"I am hoping for your support and for a chance to discuss this issue with you at any time you find convenient," Zhukov said in a letter to IOC President Jacques Rogge, posted on the national Olympic Committee's website on Friday. "To be honest, I and millions of Russian citizens were deeply disappointed by the IOC Executive Committee's decision to exclude wrestling from the 32nd Olympic Games to be held in 2020."

The article is based on materials from Kommersant, Gazeta.ru and Interfax.