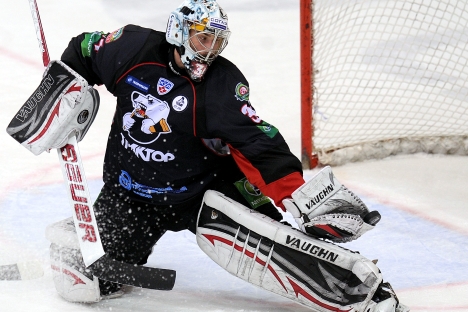 The 30-year-old Canadian Michael Garnett has become so popular and has blended in so well in Chelyabinsk that there are rumors he will stay in Chelyabinsk after he completes his career in the KHL. Source: ITAR-TASS

The 30-year-old Canadian and Traktor Chelyabinsk goaltender, Michael Garnett, will extend his contract with the KHL club for two more years.

Michael Garnett’s solid and reliable performance contributed substantially to the success of Traktor Chelyabinsk last year, when the Russian hockey club won the regular season championship for the first time in its history.

Garnett has become so popular and has blended in so well in Chelyabinsk that there are rumors he will stay in Chelyabinsk after he completes his career in the KHL. Garnett, a goaltender for the 2013 KHL All-Star Game, talks about his idol, Pavel Datsyuk, girls in Chelyabinsk versus girls in Canada, and where he can be found when he’s not on the ice.

RBTH: Michael, is it true that you will stay in Chelyabinsk forever?

Michael Garnett: I like the people here, I like the environment in the team and the city, and I will surely play in Chelyabinsk for at least two more years. But I’m not making any plans for the future. Everything you’ve heard about my decision to stay in Chelyabinsk is just rumors.

RBTH: Traktor is your fourth Russian club. Which club was the most interesting and comfortable for you?

M.G.: I’ve had my best experiences here in Chelyabinsk, with Traktor. We won the regular season championship and played in a playoff semi. That’s something you don’t forget.

RBTH: What was it like for you to play in the All-Star Game?

M.G.: I loved it. It was a great fun and a remarkable atmosphere. Also, I had the chance to play alongside the best players in the league. I met Tim Stapleton from Dynamo Minsk, and we became friends.

RBTH: Do you have hockey idols?

M.G.: I think it’s got to be Pavel Datsyuk. I know what it’s like to play against him. [Datsyuk scored an amazing shootout goal against Garnett for CSKA against Traktor; Garnett also allowed a goal scored by Pavel during the All-Star Game shootout show in Chelyabinsk.]

RBTH:Does it matter who coaches the team — a Russian or a North American?

M.G.: It makes no difference. The main thing is that he must be a real professional and an excellent psychologist.

RBTH: Do you know anything about your roots?

M.G.: I know my ancestors came from Britain, but there’s also Ukrainian and Czech blood in me.

RBTH: We know that you cook well. What is the last thing you cooked?

M.G.: Yes, I like cooking. But you don’t have to cook a lot for one. I have coffee and a piece of toast in the morning — that’s the last thing I cooked (laughs). Yesterday I cooked risotto.

RBTH: Michael, how’s your personal life? Have you met a girl in Chelyabinsk?

M.G.: I have lots of good friends in Chelyabinsk, and there are some girls. But if you’re asking whether I’ve met a girl I could spend the rest of my life with, no, I haven’t.

RBTH: Are Chelyabinsk girls a lot different from Canadian girls?

M.G.: The main difference is that girls in Chelyabinsk are stylish and look perfect. In Canada, they don’t pay too much attention to clothes.

RBTH: Do your fans bother you at all?

M.G.: No, I’m pleased when people recognize me and ask me for my autograph. I doubt that I would be treated like this in Canada.

RBTH: What do you get into in free time? Can you be seen around town, outside the skating rink?

M.G.: I have a favorite karaoke bar. I go there quite a lot, and I even sing there.

RBTH: Do you know many Russian words?

M.G.: I haven’t counted, but I can communicate in Russian.

RBTH: What interests do you have besides hockey?

M.G.: If I have free time, I watch NHL playoff games. I also like watching underwater swimming and playing golf in the spring and summer.

The interview is first publsihed in Russian in Rossiyskaya Gazeta.