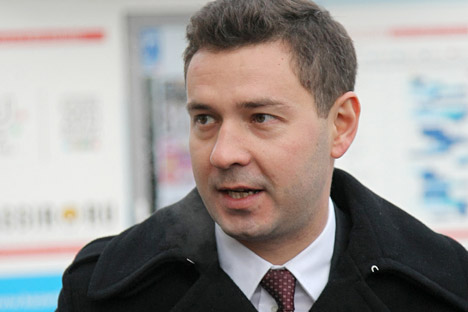 Vladimir Leonov: The Student Games will be a kind of exam for Russia, because our organizational performance here will have an influence on the larger events to come, among them, of course, the Olympic Games in Sochi. Source: RIA Novosti / Egor Aleev

Vladimir Leonov, the director of the Universiade that will be held this summer in Kazan, spoke with Valentina Borisova of Izvestia about how the experience will help Russia prepare for hosting the Olympic Games.

Izvestia: At what stage of readiness are the sporting facilities in Kazan?

Vladimir Leonov: The Games will involve 49 sporting facilities, 19 of which were built even before we won the right to host the 2013 Student Games and are now being renovated. As for new projects, the past four years have seen the construction of 28 stadiums, many of which are already serving the public and sports teams.

All the competition sites have been built to the highest standards and meet the very latest requirements and technical regulations. We have until March to complete the construction of the two largest arenas: the Water Sports Palace and a 45,000-seater soccer stadium. Twelve test events were held last year, and this year's calendar includes another 10, mainly water sports.

Izvestia: Are you collaborating with the Sochi 2014 Organizing Committee or working autonomously?

V.L.: We are working closely with representatives of the Olympic Committee, and also cooperating with the organizers of the 2018 Soccer World Cup. More than that, we are actually involved in holding these events. Following the Student Games, for example, most of the staff and volunteers will relocate to Sochi.

From an operational point of view, the two sporting events are alike — in terms of transport, for instance. They involve the same departments and ministries, and there is overlap in terms of partners, too. Besides, we have the same consultants and ticketing organizers.

All staff, workers, and even drivers from Kazan will do the same job in Sochi. The Student Games will be a kind of exam for Russia, because our organizational performance here will have an influence on the larger events to come, among them, of course, the Olympic Games.

Izvestia: It has been repeatedly stated that the competition in Kazan will be unique. In what way?

V.L.: To start with, they will be unique in terms of scale: [They will be] the largest Student Games ever. As I said, the competition will feature 27 sports. In addition, 351 sets of medals will be up for grabs, compared with 302 in Sochi. Participation has also expanded to include 12,500 athletes and officials from 125 countries, and that is not even the final figure, as we expect it to rise by another thousand.

The Games will take place in more than 50 sporting facilities. Believe me, the World Student Games have never seen anything like it, it is truly unprecedented.

Izvestia: How do you plan to attract spectators given that there will be no free distribution of tickets?

V.L.: Freebies are often not appreciated, and it's no guarantee that giving away free tickets will fill the stands. Charging for student competitions is standard practice worldwide; besides, the price is very democratic: RUB 30-300 ($1-10). Some foreigners have applied for tickets, but not so many — about 5-10 percent. Most visitors will be from Kazan and Tatarstan, plus Moscow and St. Petersburg.

I would like supporters to make a conscious decision to come to the Games by buying tickets beforehand. About 30 percent of all the tickets will be distributed by invitation. They will also be distributed through various social channels, including partner universities. Tickets went on sale on July 6, 2012. Online sales are now closed, but they can still be purchased from offline distributors.

Izvestia: Transport is always an issue during major events. How will Kazan cope with this?

V.L.: Yes, the question of transport was a priority for us. I can report that a special network of trams will be in place for the start of the competition.

Second, three metro stations will open in Kazan, and an express train, similar to the one in Sochi, will deliver passengers from the airport to the city center every 15 minutes. We are in talks with Aeroflot to increase the number of flights in the period July 1-20 and with the Federal Air Transport Agency on an "open sky" arrangement during the Games.

But most importantly, we want to agree with the authorities to allow all participants and guests who have purchased tickets to ride on the municipal transport system for free. The matter is presently being decided, since an agreement needs to be struck with all the parties involved, of which there are many: subway, buses, trolley buses, trams, etc.

The interview is abridged and first published in Russian in Izvestia newspaper.