‘Road to Sochi’ project set to run across the US 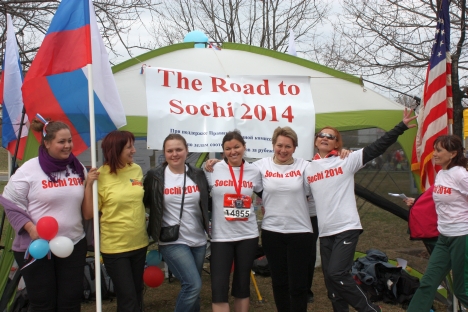 Road to Sochi kicked off on March 16, 2013, when the project’s organizers, volunteers and runners all participated in the “Rock ‘n’ Roll USA” marathon) in Washington, D.C. Source: Alex Guslistov

Road to Sochi 2014 – a project co-sponsored by ARSA “Harmony” and the American Association of Russian Women – kicked off at a marathon in Washington, D.C., on March 16. The project’s organizers say their mission is to raise awareness about Sochi and promote the many ties between the U.S. and Russia.

In the year-long run up to the 2014 Winter Olympics in Sochi, Russia, the American-Russian Sports Association “Harmony” (ARSA) and the American Association of Russian Women (AARW) are co-sponsoring Road to Sochi 2014 – a project that has gathered Russian athletes from abroad and in America to take part in a number of prestigious track-and-field events to be held in the U.S. in the coming months.

Road to Sochi kicked off on March 16, 2013, when the project’s organizers, volunteers and runners all participated in the National Marathon (recently renamed the “Rock ‘n’ Roll USA” marathon) in Washington, D.C.

More than 20,000 runners took part in the marathon, and Road to Sochi was there at the finish line to pass out brochures and answer questions about Sochi.

“We really wanted to say something about the Olympics, bring attention to the Olympics. We wanted to celebrate sports and everyone involved. It brings everyone together,” AARW President Larisa Petrenko said in an interview with RBTH.

She emphasized the goal of promoting the city of Sochi in particular. “Few people know about Sochi…. not just the city, but also the mountains and the resort,” said Petrenko.

Besides the Olympics, the larger aim of Road to Sochi is the promotion of civic ties between the U.S. and Russia. “The point of the Olympics is to keep politics and peace separate,” said ARSA President Pavel Krapiva, bringing up the ubiquitous Russian maxim “O sport – tiy mir.” Translated, the phrase means “O sport – you are the world.” However, because the Russian word “mir” means both “world” and “peace,” the phrase can also be understood and translated as “O sport – you are peace.”

The project brings together an impressive group of Russian champions to participate in track-and-field events around the U.S. and to help promote the goals of Road to Sochi.

The high-profile members include: Tatyana Pozdnyakova, a four-time World Champion and seven-time champion of the Soviet Union; Lyudmila Petrova, who competed for Russia in the 1996 and 2004 Olympics; and Firaya Sultanova, a long-distance runner who competed in the 1996 Olympic Games and currently holds the record for the Boston Marathon in the Women’s Masters class.

Tatyana Pozdnyakova is no stranger to cross-cultural exchange: her first visit to the United States was as part of the Soviet team competing against the U.S. in Indianapolis, IN, at the 1981 track-and-field competition between the two countries.

Running away from stereotypes

These meets were held every year, alternating between locations in the U.S. and the Soviet Union. Pozdnyakova’s first experience in the U.S. proved to be formative and gave the athlete a new perspective on running. “I felt a huge responsibility for the Soviet Union… I felt that I was a representative of the Soviet Union and did not have the right to perform poorly. Often, this psychology got in the way. I only began to run for myself when I first came to the United States. I felt calmer,” she told RBTH in an interview.

Lyudmila Petrova had a similar moment during one of her races in the United States. “My biggest moment of responsibility to Russia was at the first start in Atlanta 2004,” said Petrova, recalling the pressure she felt to not let the country down, even though she had just recently given birth and had not received sufficient time to train before being called upon to represent Russia in the Olympics.

She set the standing record for the event in 2002, and she went on to win again in 2003 and 2008. When asked how she managed to keep herself in such good, competitive shape after 40, Sultanova told RBTH that she was motivated most of all by her love for her late husband.

“Success comes from having a strong work ethic and from not wanting to let loved ones down,” she said. Sultanova – who does not smoke, drink, or eat fast food – also attributes her success to sheer will-power and patience.

Along with around 60 other participants, Pozdnyakova, Petrova and Sultanova are gearing up for the next stages of Road to Sochi’s program. With the D.C. marathon completed, the project’s next event will take place in Charleston, SC, on April 6, 2013, at a 10K race with up to 50,000 participants.

With the D.C. marathon completed, the project’s next events will take place in Charleston, SC, Seattle, Atlanta and Baltimore. Source: Alex Guslistov

Road to Sochi 2014 is not only working to promote U.S.-Russian civic ties in America, nor is it working only with seasoned professionals.

Six years ago, ARSA “Harmony” began participating in the International Sport Youth Festival in Moscow, taking a (Russian-speaking) American team to compete against Russian teams in a variety of sports, including track and field, soccer, table tennis, wrestling and chess. Russian-American student Stas Brown, 18, traveled to Moscow with ARSA’s American team in 2009.

“It was the most fun two weeks of my life,” Brown told RBTH. “We took tours around Moscow and we got to go to events at night, like discothèques.  The best part was meeting so many people from all over the world.”

In late April 2013, Moscow will be hosting the “O Sport – Tiy Mir” youth conference for all Russian youth living abroad. Brown will be attending the conference as a delegate from Road to Sochi 2014.