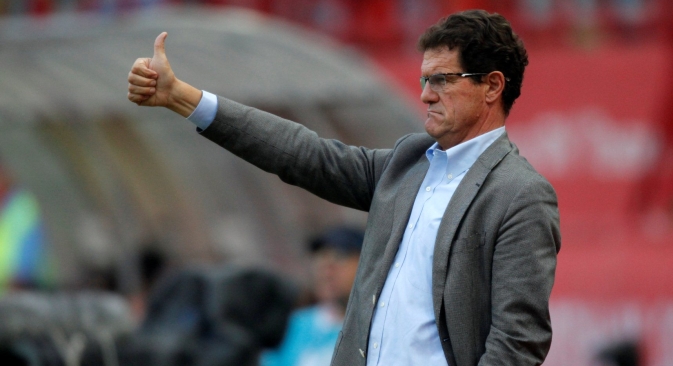 Fabio Capello: "As a coach, you should always be confident — or find another job." Source: AP

Coach Fabio Capello — who has led Russia’s national soccer team to a five-point lead over favored Portugal in the World Cup qualifiers — sat down with Rossiyskaya Gazeta to talk about Russia’s match against Northern Ireland on Mar. 22, as well as his experience living and working in Moscow.

Over just a few months of coaching the Russian national team, Fabio Capello was able to propel his players into the best World Cup qualifiers start ever.

Last fall, Team Russia — revamped by the Italian — won four out of four games and is now five points ahead of the group favorite, Portugal. This means that Russia has a very good chance of making it to the World Cup finals for the first time in 12 years. Yet Capello is not taking anything for granted in the run up to an away game against Northern Ireland.

Rossiyskaya Gazeta: What are your feelings ahead of the match against Northern Ireland? Do you have confidence in your team?

Fabio Capello: As a coach, you should always be confident — or find another job. I think this game is going to be crucial for us. Northern Ireland tied with the Portuguese at home, so the visit to Belfast will be a serious challenge for our side. I really hope our players have joined the team in their best shape. The problem, though, is that they haven’t played many official games this year. More practice is needed to improve their physical condition.

RG: Some fans think that the Russian team has already guaranteed itself a place in the World Cup. Aren’t you afraid that this attitude might infect the players?

F.C.: (Smiles) No. Because a five point lead is definitely not enough. We’ve only played four matches and there are six more to come. It will be very difficult to qualify for the World Cup. Indeed, we have started off well and were able to overtake Portugal. But we still have a long way to go in the qualifiers.

RG: You’ve been working in Russia for half a year. Have all of your expectations been fully met?

F.C.: In the beginning, I faced some difficulties choosing the best place in Moscow to hold a training camp in the run up to our home games. First, I visited the facility in Kratovo — that’s where Anzhi Makhachkala is based — but we eventually we opted to stay at Swissotel and train at the Torpedo Stadium. It was a very good choice.

Apart from that, the last time we played at the Lokomotiv Stadium, the field left much to be desired. So we decided to move the next match to Luzhniki. And it’s going to be even more challenging next year, when Luzhniki is expected to close. Once this has happened, there will be no stadia left in Moscow (laughs). That is why we plan to play against Luxembourg and Israel in St. Petersburg.

RG: What do you make of the Russian weather? Moscow has been hit by a snowstorm recently.

F.C.: Well, I like it. There was this one time when bad weather dampened my mood a bit but, overall, I don’t see any problem in a couple of days of snow.

RG: You are known as a big admirer of Russian culture. Are you comfortable living in Moscow? Do you have enough spare time to go to the opera or art exhibitions?

F.C.: Absolutely, no problem. I’m happy here. My wife lives in Moscow permanently, just like me. We’ve rented a flat in the center because I don’t like hotels. In fact, I hate living in hotels: The atmosphere there really brings me down. I like the freedom of living in my own apartment. Here you can spend your time as you wish — eat, drink and listen to music.

RG: Your sternness is legendary. What are your “rules of life”? Is there a specific list of things your players are not expected to do?

F.C.: My rules are perfectly normal; they are common to all sportsmen. Respect is the main thing — respect for the rules, the daily regimen, all the people you work with. You won’t achieve anything without respect. Tell me, why should everyone wait for someone who is late for breakfast because he didn’t get up in time?

I remember how the players of the legendary 1972 Ajax with Cruyff gathered for lunch. They would sit at the table all together, wearing identical clothes. If you want to build a solid team, you have to apply yourself.

And don’t expect any special treatment just because you’re a star. Be a star on the field: that’s where you should keep it up and get the result the team needs. The best thing that can happen is for the key players to rally the rest of the squad around them. That’s something only they can do — not the coach.

I remember Baresi, Maldini, van Basten, Raul, Hierro, Beckham… They were very humble off the field, just like everyone else. That’s the kind of attitude we are looking for. What we don’t need is another spoiled star with special demands. As simple as that. Respect, respect and even more respect.

RG: What can you say about the Russian players’ mentality? Is it different from what you saw in Italy, Spain or England?

F.C.: I wouldn’t say so. You see, a lifestyle depends on the customs in a given country. In Spain, for example, it is considered normal to go to bed at two in the morning and have dinner at 10 p.m. Italians are a little different. They prefer to go to night clubs and spend the whole night there after a game. The English like to gather the whole team together and have a drink or two. That’s their way of life.

But I would like to reiterate that respect for the rules is key. When you prepare for a game, you should give all you’ve got during training sessions and seek constantly to improve yourself. That’s why, when a national team spends a couple of days together, its regimen consists of working, sleeping and eating — and teambuilding.

RG: How many football matches do you watch a week? Have you ever counted?

F.C.: Let me think. Last week, Friday was the only day I didn’t watch football, because there weren’t any matches that day. Normally I watch the Russian championship on weekdays and Mondays, and European tournaments from Tuesday to Thursday. That’s football every day. And I’m fine with it, because it’s my job.

RG: What has struck you most in football over the last few years?

F.C.: My perception of football has undergone three radical changes. The first was associated with the early 1970s Ajax with Cruyff. That was when total football emerged with its fantastic pressing. Next was Arrigo Sacchi’s and, later, my Milan. We introduced a couple of changes into the way pressing was used and played very compact football.

And the third change was brought about by today’s Barcelona. It has a brand new style — a truly unique one. Others have made some innovations, too: another way to make free kicks or an interesting approach to performing corner kicks; but global changes have been introduced by the three clubs I’ve mentioned.

RG: So, we may have to wait another 20 years for the next change?

F.C.: Who knows? (Laughs) I suppose so. Let’s wait and see when someone with a new vision comes up. This is really interesting.