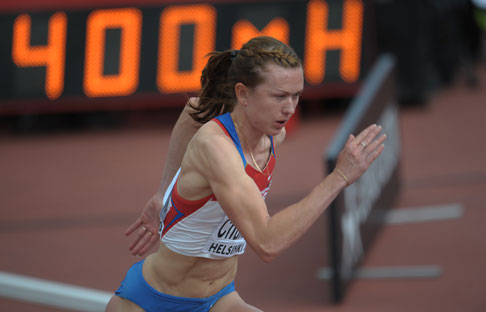 The 26-year-old runner Elena Churakova was disqualified from competition for two years because of proven case of doping. Source: Grigory Sysoev / Ria Novosti

The president of the Russian Athletics Federation Valentin Balakhnichev comments on the recent scandals surrounding the disqualification of Russian athletes and speaks about new tools in the fight against doping.

Elena Churakova, the 26-year-old runner who competed for Russia in the London Olympics, has been disqualified for two years for doping. Having made the semi-finals at her first Olympic Games, she is now unable to take part in official athletics competitions until February 27, 2015.

A doping sample submitted by Churakova at the end of January 2013 was found to contain banned substances (metandion and testosterone).

The president of the Russian Athletics Federation (RAF), Valentin Balakhnichev, commented on the situation exclusively for RBTH. Balakhnichev does not describe the state of affairs as critical and cites some reasons for the increase in positive doping tests from Russian athletes.

“We must be honest for our own sake and that of the sport. The recent disqualifications of Russian athletes were due to the anti-doping crackdown and the emergence of new tools to detect the very latest drugs,” Balakhnichev told RBTH.

“The rigor of the anti-doping campaign is defined not only by our Federation's new tools, but by the rules of the International Athletics Federation (IAF).

Two Russians thrown out of London Paralympics for doping - committee

“It is also worth noting the amendments to the legislation of the Russian Federation. Just two years ago, doping was not classified as an offense under Russian law. But, henceforth, not only athletes can be punished, but also their attendants – particularly trainers. The independent anti-doping organization RUSADA, set up in 2010, is also helping to detect cases of doping in Russia. It was created under the auspices of the Ministry of Sport, which has begun to allocate more money to combat doping. I'll cite an example. Whereas five years ago in Russia there were no more than 500 doping tests annually, last year we took 3,500 samples. This year, we plan to take 5,000,” said Balakhnichev.

According to Balakhnichev, the disqualification of Elena Churakova was not unexpected: "In my view, you cannot fight doping without harsh sanctions. Due to the increase in doping tests, we expect to see more disqualifications of Russian athletes," said the president of the RAF.

"We should not be intimidated by that fact. International statistics show that 1-2 percent of samples always return a positive result. And I'd like to mention our new anti-doping lab, which develops new methods of diagnosis and maintains an ongoing dialogue with laboratories in other countries.”

Balakhnichev summed up by noting that the introduction of biological passports for athletes in Russia would be a key element in the fight against cheating.

"The introduction of biological passports, developed by the IAF and RUSADA, will be an important anti-doping tool," said Balakhnichev.

"They are now widely used in cycling and have made the sport much cleaner. The Russian lab will also introduce biological passports as of January 1, 2014."

The sample she gave at the 2005 World Championships in Helsinki proved positive for illicit substances. All her tournament results from August 12, 2005 to August 11, 2007 will be scrubbed.

Another medal-winner at the Athens Olympic Games in 2004, 43-year-old Svetlana Krivelyova who won bronze in the shot put, was also banned for two years, starting from April 2, 2013.

RBTH gained exclusive access to the thoughts of Sydney Olympic champion Irina Privalova. "It is sad that the Russian team has lost another Olympic hope,” she said.

"Churakova did Russia proud in London and could have medaled. However, I don't think our sport has lost her completely. Elena must continue to train and not lose heart.”

“As for Kuzenkova and Krivelyova, there is nothing much to say. They finished their careers a long time ago,” said Privalova.

“It's a shame that so many Russian female athletes have been caught doping. Our Federation is doing everything it can to prevent similar cases, but top-class sport is always unpredictable.”